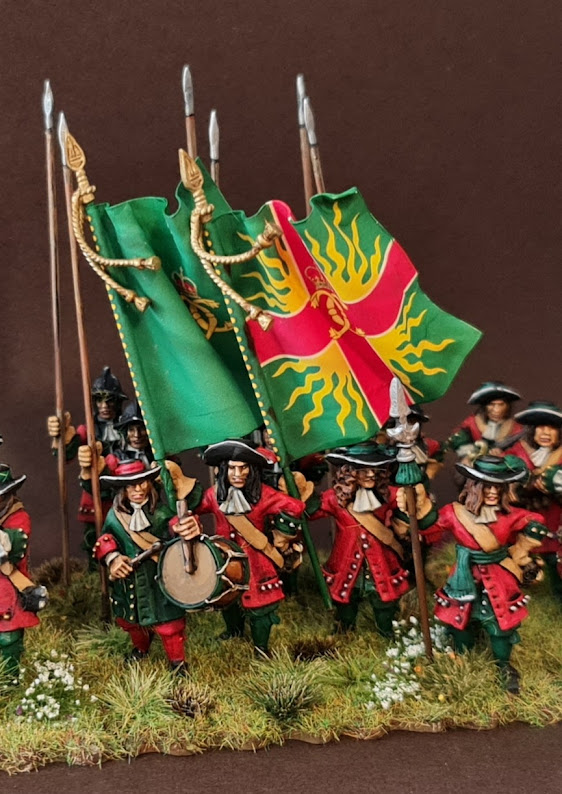 Here's the second regiment of my 1672 force- the Tangier Regiment, AKA Kirke's Lambs. This regiment cut it's teeth defending the British outpost in Tangiers and later fought at Sedgemoor.
Most of the minis are by an unknown painter but chum Dave Millward filled out the ranks of musketeers, I highlighted and mounted the Flags of War flags- the billows came out particularly well on these. Ian Notter flocked the FK&P6 bases, and I tufted. 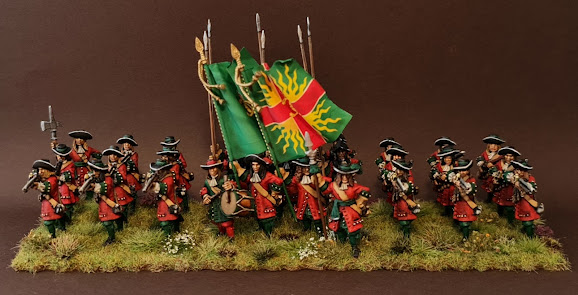 This is my second take on this iconic unit, I've also raised it (below) using Front Rank Miniatures. The original unit had a bigger frontage (25cm as opposed to 19cm) - it is rather less practicable, for that reason, but looks magnificent. Armed with snaphance muskets, it's better suited for the 1680s than my current 1670's obsession, and I'll probably use it for Sedgemoor. You can read about my other battalion here. I think I can live with the new, smaller unit size (above) - it'll be much easier to fight large battles with this size of unit, and rather less painting per unit, which means 50% more units. Of course, there would be even less painting if I'd gone for 2 ranks, but then one must suffer for one's art.

In other news, I've finally bitten the bullet and am in the process of painting the actual BigRedBatCave, photos next week, hopefully. Until then, stay safe everyone!
Posted by BigRedBat at 09:33

Well I think they both look the biz!

And very nice they look too.

They both look great - I have been tempted by those late 17th century figures from Front Rank for many a year - perhaps one day I shall succumb?