I do love a mini with a Thureos! Here are two new units of 16 Crusader Thureophoroi painted by my very able mate Nick Speller, and based by me. 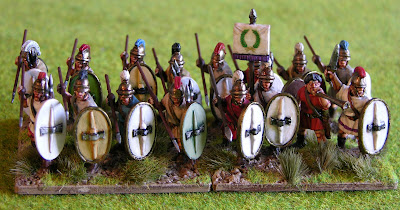 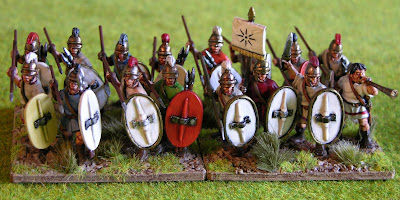 Here are my original two units of converted Foundry peltasts; I must say I somewhat prefer these minis to the Crusaders. The figures are slightly taller and very well formed. 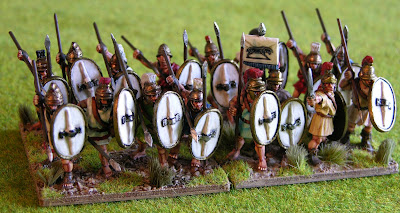 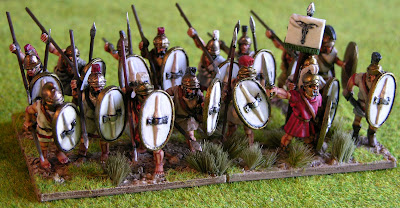 And finally... all together! These are the nucleus of my early-Mithridatic Pontic army. I hope that, after Salute, Nick will go on to paint enough minis to complete all 4 units at 24-man strength... 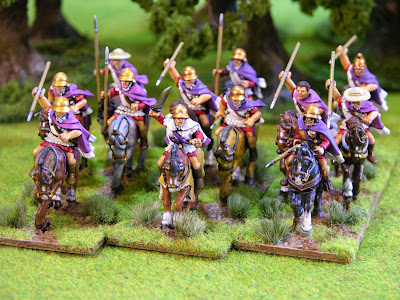 I'm in between big projects, so I thought I'd stick up a photo of a unit I part-painted earlier (mostly painted by Andy Bryant). I experimentally based them in tetrahedrons on long, narrow bases; I was trying to catch the feel of Alexander's cavalry formations. Alas I've not taken to the feel of this approach, and I'm thinking of rebasing them, perhaps at the same time taking the opportunity of giving them shields and calling them Successor or Macedonian guard cavalry.

This week I shall mostly be painting 7 EIR legionaries, and prepping a unit of 24 Auxilia.
Posted by BigRedBat at 14:03 2 comments:


Galatian mercenaries, hired from the Celtic tribes on the central plateau of Asia Minor, were not uncommon in Successor armies. These depict mercenaries serving the Ptolemies, and are loosely based on the reconstruction in the Ptolemaic Montvert; I'm very pleased with them. The images are clickeable, and previous posts show the various stages of painting.

Is it my imagination, or is the woman in the background, below, smiling as they approach her? ;-)

Took me 2 long evenings just to paint on all the ironwork and torques! Shields tonight... then I can think about basing.

Email ThisBlogThis!Share to TwitterShare to FacebookShare to Pinterest
Labels: Galatians

I thought it would be useful to take a closeup shot of one of the samples Mario kindly sent me (this is clickable), and write a brief review. 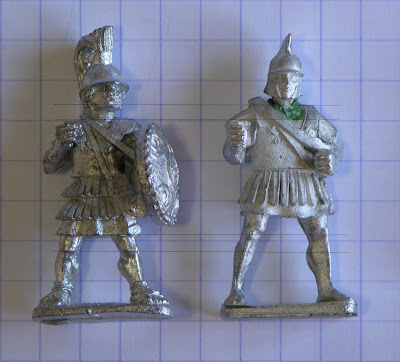 The model I'm comparing Mario's figure with, is one of the Foundry Successors, designed, I believe, by Steve Saleh. I'm not an expert on Successor Gear, so won't address this; but from what little I know, both appeared to be realistically dressed.

Mario's models arrived with very little flash on them, and the detail is extremely crisp (just look at the ties on the linothorax!). I received 6 bodies and 8 heads, but have only showed a couple here for reasons of time.

By my (approximate) measurements, Empire's model is 28-29mm from the soles of the feet to the eye, compared to 27mm for the Foundry. You'll see I've used greenstuff to fix the Empire Models head in place; I did this because I felt it needed a bit more neck than if I'd placed the head directly in the socket; without this he'd be slightly shorter. Heightwise, I'd have no hesitation in using both within the same unit.

The main difference between the two ranges is in the legs, and particularly the lower leg, with Empire's perhaps 2.5mm longer than Foundry's. I'm very familiar with the Foundry models, and my first impression was that the Empire looked a little "leggy"; but on reflection, I suspect that the Empire range is closer, than Foundry's, to natural human proportions. The legs and arms of the Empire models are also much more slender and naturalistic. One thing that tends to make the legs on the Empire models look longer, is the shortness of their tunics; the one on the above figure is amongst the longer ones (and looks fine to me), but I did feel a little uneasy about the shortness in one or two of the other poses (see previous post). Another point about the legs on both models, is that they are set quite wide apart; I'd have preferred them to have been nearer to each other at the top. Not all the Empire legs are set this far apart, though.

The Empire model is rather broader in the upper body than the Foundry. Detail (such as the pteurges and folds in the tunic) is crisper and less exaggerated on Empire than on the Foundry model. 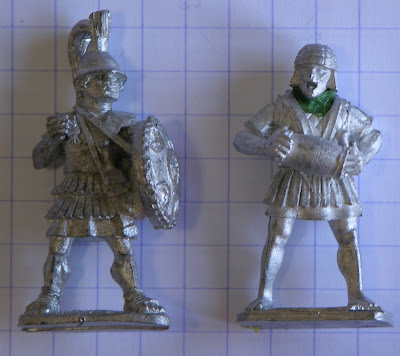 To sum up, I really like the naturalistic feel of the new Empire Models range. The wide selection of heads and poses will mean that it will be possible to assemble units where all of the miniatures are different from each other. Also the heads could also be used for conversions of other minis, helping me to build, perhaps, the Maccabean army I've long dreamed of. I will put my Empire minis in different units to my Foundry minis (because of the legs), but that's just me, you may be happy to mix them. I will certainly be buying some shortly...
Posted by BigRedBat at 10:49 No comments:

Mario Kkounnous of Empire Models (http://www.empiremodels.co.uk/) has been kind enough to send me some size-comparison shots of his new range of miniatures, and some crisp samples which look really nice and which I intend to pore over, later tonight- I'll post a brief review in due course. The figures on the left in each photo are from the Wargames Foundry World of the Greeks range, and the painted figures on the right from Marios' new range. 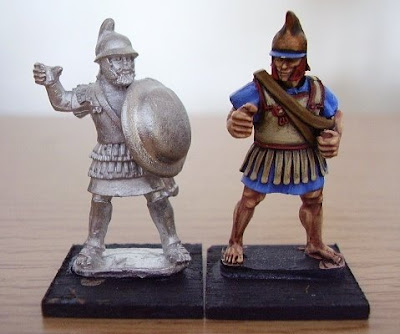 I thought it would be useful to post these, as there has some concern has been expressed on TMP that they might be excessively tall; you can see that each is very similar in size to the Foundry World of the Greeks figure next to them. This suggests to me that they will fit heightwise with Foundry, Crusader and probably with the new Gripping Beast Range, which I'd expect to be Foundry-sized. 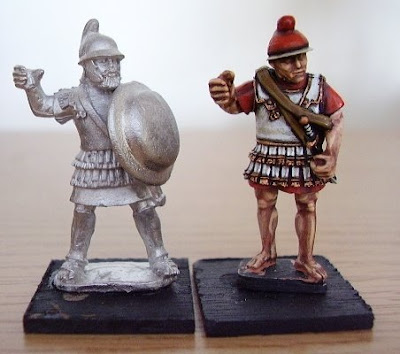 One comment I'd make, is that in the photos it appears that the hands are quite large; having compared with the samples, this is not the case in reality and it appears to be foreshortening in the photos. 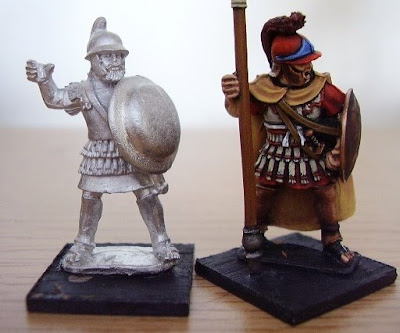 I'd like to thank Mario for being so responsive!
Posted by BigRedBat at 15:51 No comments:

So here the are boys (easy to tell they are boys!) in their pre-varnish state; they are fully painted, aside from shields and metallics. Last night I washed them using a very much diluted coat of Ronseal walnut woodstain, which has brought out the musclature nicely (but unfortunately you can't really make it out from the photo, which is again too light; try clicking on it for a slightly better view). When I take the next photo I'll take more care.

I was very pleased with the woodstain wash, and will be using it on pretty well all of my future painting.

There will be another post soon on an unrelated but very exciting Ancients topic later today; stay tuned...
Posted by BigRedBat at 11:19 No comments:

Email ThisBlogThis!Share to TwitterShare to FacebookShare to Pinterest
Labels: Galatians 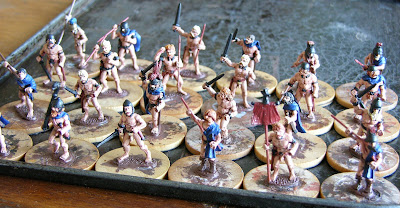 A couple of days hard painting; yet it doesn't look a lot different to the last photo! I've painted hair (head and elsewhere...) and black-primed areas that will later be metallic. Next I need to paint straps, boots and plumes, and think about using a wash.

As part of my time saving objective I've decided that I'll paint metallics on after varnishing. This will enable me to spray gloss and then matt the figures, rather than needing to use a brush.

I must say I'm enjoying painting a unit in one go. I usually paint in groups of 5-8 minis; it's a nice change to see an entire unit shaping up together. I hope I'll have this unit finished in around a week.
Posted by BigRedBat at 09:27 6 comments: