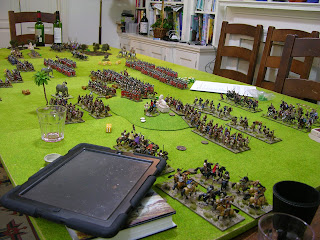 We played another game between Caesarians and Pompeians, tonight, using the rules I'm developing (with lots of help from friends).  These shots are of the devastated battlefield at the end of what turned out to be a particularly bloody battle (especially for the Pompeians!).  The game lasted about two and a half hours, and the mechanics worked very nicely, although the elephants were a little pedestrian and need to be "sexed up", somewhat.  Of particular note is the iPad; this was the first time I've ever run a game from one, and I must say it worked very well, indeed.  Also of note are the two empty wine bottles, which lubricated proceedings.  A jolly session! 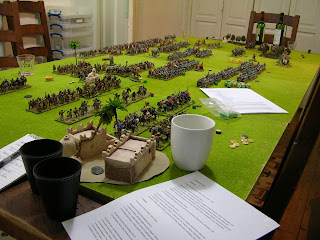 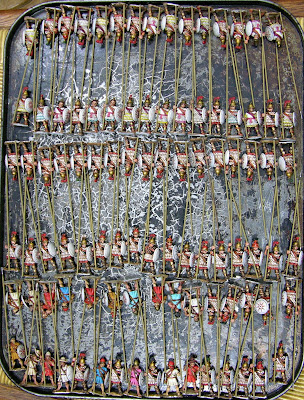 The 96 miniatures required for my first two (of four) "white shield" units now have their shields, and are all "piked-up".  This stage of the process of building a unit is always the worst, as the figures look awful viewed from the side, rather than the front, and un-based.  The night is darkest just before the dawn, they say...
Posted by BigRedBat at 19:16 5 comments: 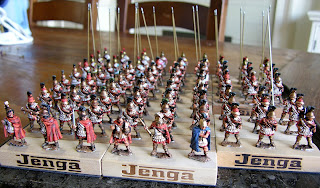 A quick WIP shot, of most of the phalangites for the 4th and 5th pike blocks for Raphia, mustering on their Jenga painting blocks.  Most of these were painted (very nicely) by Raglan, but I needed to replace his pikes with my blunt pins, re-base and repaint most of his crests from black to the red I'm using for my phalanx.  I spent a very long evening yesterday, painting the 60-odd required pikes.  Yawn...


In other news I've been plugging away with my draft set of Ancient rules, which are now 9,300 words long.  I reckon that they will be more than twice that, when finished.  I managed to work out how to upload them onto my iPad as a pdf, and they are now stuffed to the gunnels with hyper-links, so it should now be possible to navigate around them easily.  I'm going to try running tomorrow's game from the iPad...

Out of curiosity, does anyone use iPads or laptops at the wargames table?
Posted by BigRedBat at 12:03 11 comments:

Charioteer and a Queen

My projected British chariot force has been delayed by the Raphia project.  However, I've just received around half of the crews back from my mate Nick Speller, and couldn't resist showing a few of the figures. 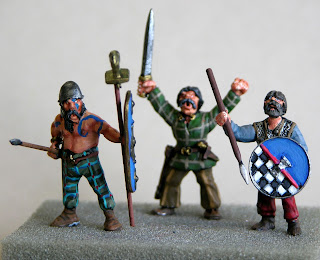 Above are some of the riders.  The figures on left and right are Wargames Factory celts, and at the rear is one from the more recent Foundry chariot release.  Nick has done an excellent job with these, but they aren't great sculpts; Foundry, in particular, should be able to do far better.  However the Factory minis were cheap, and easy to convert, and didn't need to be cut off their bases.  I think they will look great on the chariots.

Below is Boudica.  I fancied a "fantasy" queen of the Iceni, and this model from Newline Gripping Beast, lightly converted to make her a little taller, does the trick.  She is no beauty... especially since her face was pitted in the casting process.  She is also rather chinless.  She is, however, quite a character!  She will do, nicely. 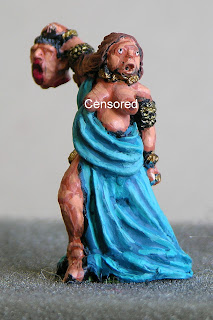 A huge thanks to Nick for the great painting...
Posted by BigRedBat at 13:28 6 comments:

Email ThisBlogThis!Share to TwitterShare to FacebookShare to Pinterest
Labels: Chariots

Somewhere near Utica, a Pompeian army under Cato (left), with local Numidian allies under Juba (some shown in foreground), faces a smaller but more confident Caesarian force (right). 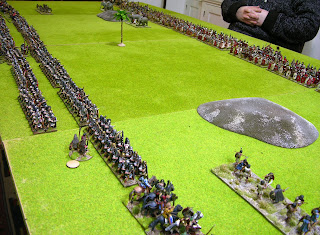 Below, elephants trot past the city gates.  It's a short but a glorious life, in the elephant corp!  I got to use all my elephant casualty markers by 9 PM. 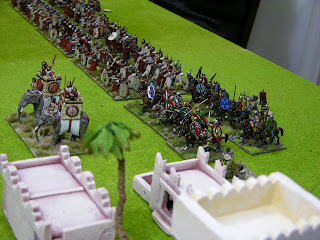 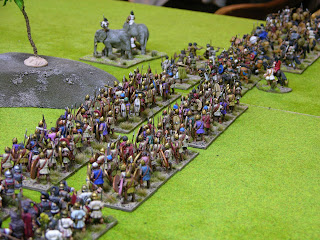 Above, the very numerous and colourful Numidian city militia and hordes of light horse, wisely hung back to let the Romans sort it our between themselves.  Below, Cato confers with a subordinate.  The newly-raised Pompeian legions turned out to be surprisingly effective force... 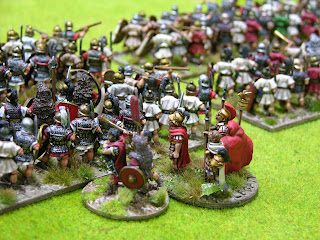 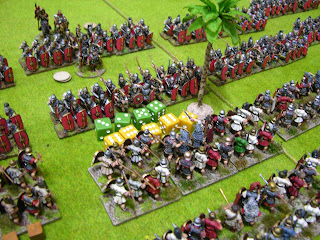 Above a Pompeian cohort of inferior troops, charged by superior Caesarian foes, and having failed to counter charge,  pulls off something of a coup by dint of expert dice rolling!  Several wins by the aggressive (and phenomenally lucky) Cato drove a deep wedge into the Caesarian lines. 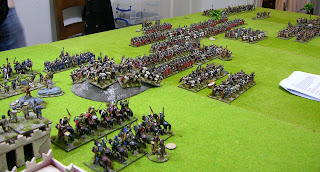 Eventually they broke through (above) and subsequently turned, ready to roll up the Caesarian line (below).  Although there were still a lot of Caesarians on the table, we felt that they would now need to retire from the field. 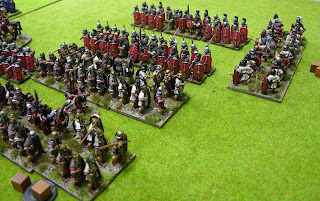 The game, played with a couple of local opponents, Nigel and Jay, proved to be a very enjoyable and relaxed play-test of my rules.  I've taken away a bunch of new ideas and will tweak the rules, for another run through, hopefully next week. 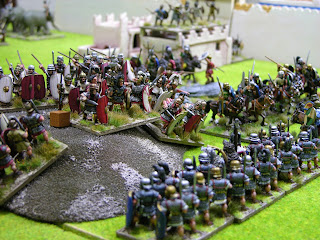 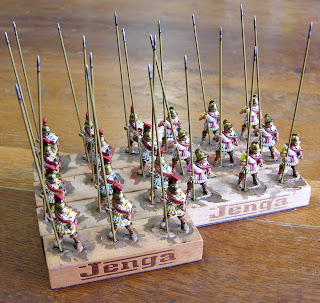 Another 21 finished (bar varnishing).  For some reason, I find the Polemarch rather less interesting to paint, than their Foundry equivalents; I'm really not sure why.  However, I've now got enough minis finished, to be able to start thinking about basing up another 2 phalanx blocks.
Posted by BigRedBat at 12:47 9 comments:

Played a game last night with Ian and a new local gamer, Jay.  Unfortunately I've not time to write the game up, but it was very loosely based on Megalopolis, the "Battle of Mice", between Alexander's regent Antipater and Agis of Sparta.

The game was mainly an excuse to a) get my emerging Raphia  phalanx on the table, and b) test the latest incarnation of my rules.  Both objectives were achieved.

Above, Spartans and allies in the foreground defend the pass against the advancing Macedonians. 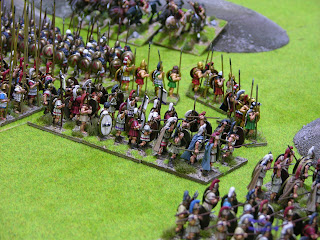 Above, some lucky (and anachronistic) Macedonian thureophoroi broke through the Spartan line. 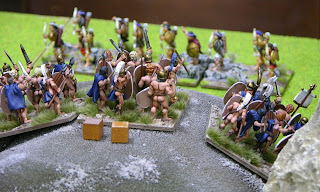 Some extrovert Galatians chasing away the Cretans guarding the Spartan flank. 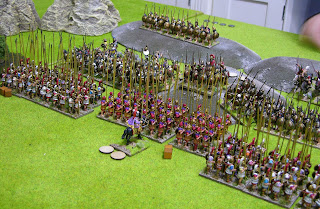 Eventually, Macedonian numbers (and pikes) told and the Spartan line crumbled.  Agis (on the small hill, centre, above) finally fell, and the Spartans were defeated, in very much the same manner as in the original battle.  Also, as in the real battle, there was barely a Macedonian left unwounded by the end.


Today I've been making the latest amendments, and hope to get another test of the same battle under my belt, tonight!
Posted by BigRedBat at 19:34 18 comments:

Email ThisBlogThis!Share to TwitterShare to FacebookShare to Pinterest
Labels: After Action Reports, Megalopolis

A footnote to star bursts...

Steve at Little Big Man Studios has very kindly published the transfer sheets I suggested to him a few days ago.  There is a new black star burst set and a new red set, which complement the existing red set, giving 72 subtle variants on a theme. They have terrific battle damage and staining on them, and are a must if you fancy raising that white shield phalanx you've always needed...

Of course I've bought some of the new sets, and now need to paint even more pike men...
Posted by BigRedBat at 13:25 No comments:

No, not the confectionary (which I still think of as Opal Fruits), but half of the shields I need for the Egyptian portion of my phalanx, mostly with the classical Macedonian starburst design (clickable).  The concept is that these are cheap wooden shields covered with felt (or perhaps locally available Egyptian linen or cotton), with designs painted on, for the cheap, emergency, wing of the phalanx. 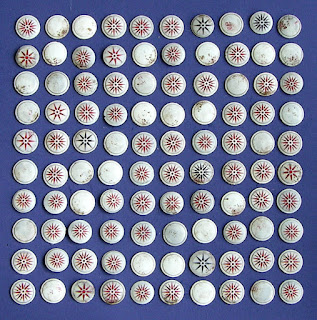 I've used the excellent Little Big Man designs, from two different sheets, and painted some plain white shields to go alongside them.  I've distressed them, somewhat.  I think the black and alternate red designs give a nice variety to the designs, and Steve of LBMS has very kindly offered to make up a new sheet for me.  I'm about 10 days away from basing up the next 2 units.

I love putting on shield transfers, I find it very relaxing.
Posted by BigRedBat at 16:10 8 comments: 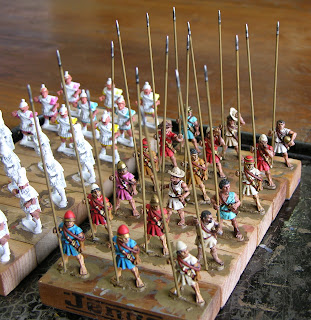 I've finished (bar shields) another batch of 18 pikemen, this time rear-rankers for the Egyptian phalanxes.  8 were painted and kindly donated by Craig, and I just needed to add pikes, and painted 10 more in a similar style.  I absolutely love the unarmoured Foundrys, they are a pleasure to paint!  The chap in the blue chiton is a pleasing conversion from a hoplite, who actually looks quite Egyptian, rather than Macedonian.

Behind are 21 more Polemarch phalangites, at an early stage.

If anyone has any of the Foundrys in the straw hats, I'd love to buy or swap for them, a dozen or so would be very useful, indeed.