This is the 15mm Roman camp from 3 posts back, painted, stained and varnished.  The palisade is my 49th Birthday present to my friend Ian, and the tents my 50th. 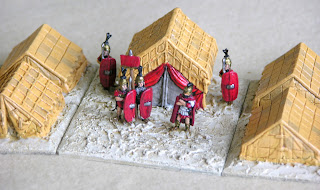 By coincidence, today is my own 50th Birthday, so Happy Birthday to Me!  I shall celebrate by starting to base a couple more units.
Posted by BigRedBat at 10:52 15 comments:

These horses are salvaged from an old cavalry regiment I have decided to renovate; they are from A&A. They are a little tubby, but I love the elaborate harnesses.  Strictly speaking, they are middle Imperial Roman horses, but I won't tell if you won't!  They are going to become the cavalry components of the two Praetorian cohorts I have planned for my EIR Army.
I will be using riders from Black Tree Design.  I have most of the riders I need, but have had to order the command minis from BTD themselves, who are far from being the speediest supplier of miniatures, gulp... this could considerably delay the unit. 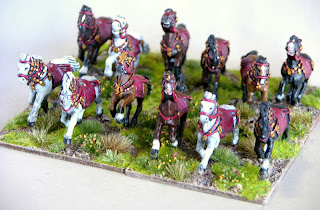 I have renovated the bases, too.  It is very odd to see a nicely-based unit with no riders!
Posted by BigRedBat at 10:07 8 comments:

I've just knowcked out a quick celtic cavalry regiment.  These were an impulse purchase on eBay; relatively poorly painted, they cost rather less than the cost of the metal from Wargames Foundry.

It took roughly a week to tart them up.  They will never look as nice as figures panted by Nick who has done most of my Celts, but I think they will look fine on the table.

Next I'm going to finish Ian's camp and work on some Praetorian Cavalry....
Posted by BigRedBat at 11:56 6 comments:

These are the tents for a 15mm-scale camp I'm making for my mate Ian as a slightly belated birthday present.

It'll consist of 9 Baeuda tents and a small guard, and will match some pallisades I made last year.

I thing these are smashing little products.  I hope that Baeuda make the praetorian tent to go this their 28mm equivalents, 'cos I want one!
Posted by BigRedBat at 20:37 6 comments:

At the moment I'm repainting 9 celtic cavalry, because my celts are becoming outnumbered by my expanding Roman armies.  I'm also working on a 15mm camp as a belated Birthday present for Ian, and renovating half an ala of Roman cavalry that I have never been entirely happy with, because I feel the GB riders are a tad too small....  photos to follow in a day or two.
Posted by BigRedBat at 22:20 5 comments:

I'm delighted to have finished basing my second Batavian Cohort and the cavalry detatchments of both Cohorts (below).  All pictures are clickable.

The second cohort (below) is broadly similar to the first cohort.  Most of the minis are a re-paint from an eBay purchase, with some BTDs and a couple of Crusader minis thrown in (I really love their cornicer,  please remind me next time I am critical of a Crusader sculpt). 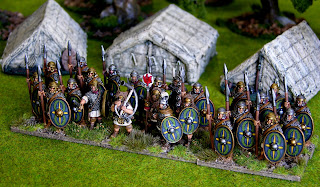 Below is the veteran 1st Cohort, from early last year. And finally, below are the combined cavalry detatchments of the two cohorts.  Each of the Batavian cohorts had 4 (later 8) turmae of cavalry, that could be grouped together to form substantial cavalry forces.
I'm pleased with the below; I took an old cavalry regiment (another eBay purchase) of Foundry Caesarian Celts, whipped the shields off, replaced a couple of minis with BTDs, and all the shields with shields nicked from my Foundry Ancient Germans in order that they would match the infantry.  I tarted up the bases and horses a bit, and they look the biz.

So now, with 7 cohorts painted, I'm pretty near to finishing the Auxiliary infantry expansion programme, and I've made a small start on the Auxiliary cavalry, of which I'll need another 66.  Gulp.
Posted by BigRedBat at 20:41 18 comments:

Whilst on holiday I decided to take some pictures of the Greek countryside, which might be useful to people modelling terrain.  We were staying in Lefkas, which is an island on the west coast of Greece, near Corfu.  I was extremely surprised by the sheer number of trees; also by the presence of many coniferous trees, which I'd not expected to see this far south.
Firstly a couple of shorts of olive trees; more than 50% of the trees I saw were olives.  They have a silvery hue to their leaves and were, in general, a paler green than other trees around them. 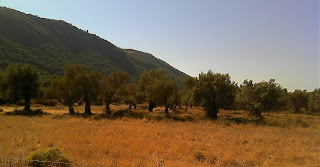 The above orchard included some low, spongy-looking bushes.  Note how many scrubby trees there are on the very steep slopes of the hill in the background! 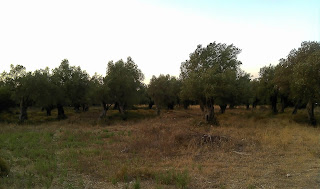 This olive orchard was only 200 yards form the other, but had rather greener undergrowth. 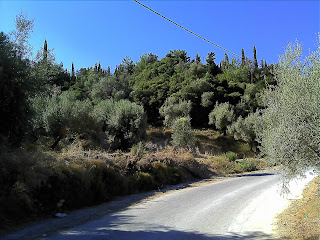 This shot shows mixed woodland, with olives in the foreground.  The lovely pencil-thin trees are cypresses, and my first priority will be to source some, as they would be very useful in Italy, too.  They often appeared darker than the other trees.  I want at least 2 dozen.  I saw one solid forest of cypresses, which had no leaves at all on the lower half of their trunks due to lack of sunlight. 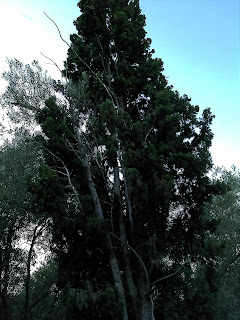 Some of the cypresses, above, had multiple trunks.  At least I think this is a cypress.

This shot shows more mixed vegetation; think and thicker cypresses, with a range of other, lower trees.  Note the variation in colours.  One could legitimately mix pine trees in with this, there were quite a few around the coast. 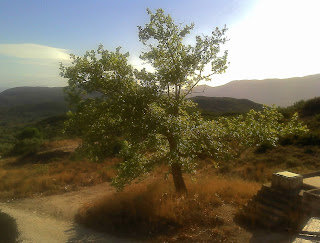 Lastly, this beautuful tree was very high up; no idea what it is but it goes to show that there was plenty of variety in the vegetation.  BTW Ground colours varied from dusty, to rich red-browns where soil had recently been dug.
I hope these are useful if anyone is thinking of modelling terrain around the coast of the Adriatic.
Posted by BigRedBat at 19:53 12 comments:

During my recent hols, my family went to Lefkas, an Island off the West coast of Greece.  I was delighted to find (and go for a day cruise on) this wonderful ship, the "Odysseia", which you can see below drawn up on a beach where we swam and had a barbecue. 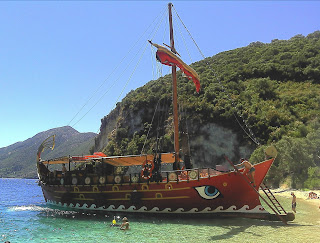 It isn't a true galley; although wooden throughout it has a keel and angine, and can only take one bank of oars on the deck.   It also has a bar.  However it did, very much, look the part!  It has been used in several historical dramas.  It has a shallow draft and was very easy to beach and un-beach, in much the same way as the ancient greeks must have. 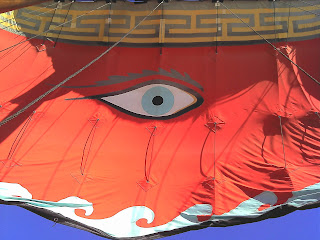 On the return trip they turned off the engine and raised the sail, which carried the boat along at a good pace!

The captain, Dimitri, was a jolly soul, very much from the school of Zorba, and made it a great trip; I'd heartily recommend the experience.  The boat sails from the resort of Nidri, and the tour is very good value at e40.
Posted by BigRedBat at 21:56 5 comments: