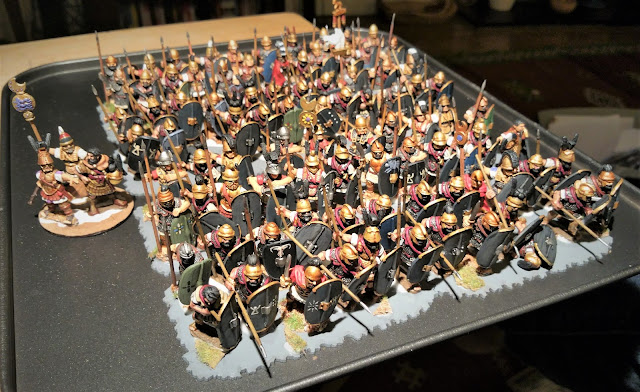 I have decided to see the New Year in with a little gentle basing- here are four units of Carthaginian veterans for one of the WHC games at the end of March. They are suitably grim- they have probably just heard that the Numidian cavalry have just defected! Around half were painted by Shaun McTague- the others are from various sources, tarted up by me. They are on a new set of magnetic bases I've designed that lock loosely together in pairs or fours. More pictures in a week or two.

Can I wish a very Happy Year to all who read the blog, play To the Strongest! or shift lead (or plastic) around any gaming table! May we all have great 2017s and may none of our cards be Aces!
Posted by BigRedBat at 23:06 No comments:

An end to flocking block 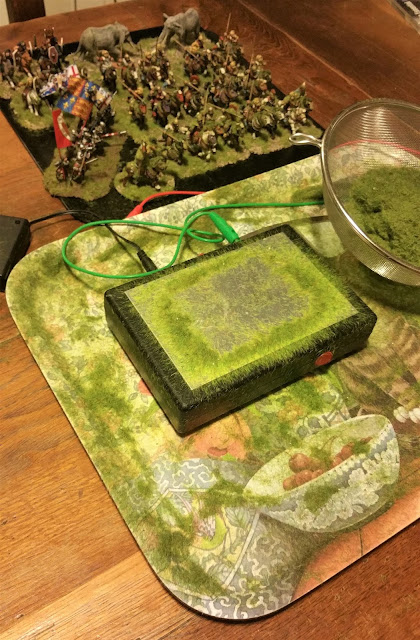 Since the summer I've been basing but haven't been able to bring myself to get out the flock box. Consequently I've built up a backlog of at least 60 unflocked units (mostly Numidians, per a previous post). Last night I actually made a start! I'll be OK so long as the Bob Dylan collection holds out.  ;-)

I can't recall where I got the flock box but it is really good find- the flock stands nicely to attention- and I've not lost my eyebrows yet.
Posted by BigRedBat at 10:04 No comments:

You wait weeks for a post, and then two come along at once. 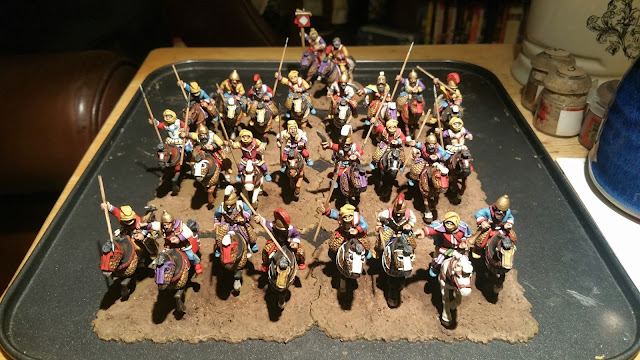 Here's a very bad photo of some lovely minis that Shaun (Redzedz) painted for me; it really doesn't do them justice (see here for better photos). These Foundry Casting Room Persian heavy cavalry will also be in the Ipsus game at the Wargames Holiday Centre next March, in the role of Satrapal horse.

I'm basing them on my irregular magnetic "Batbases" which are 19cm wide with a break in the middle (so I can easily indicate when the unit is disordered). The bases are grouted and ready for painting!

Posted by BigRedBat at 23:55 No comments:

Email ThisBlogThis!Share to TwitterShare to FacebookShare to Pinterest
Labels: Persians

Here's a WIP shot of the Parthian light horse I'm assembling for the WHC ancients day in March, when they will form part of Seleucus' host for Ipsus. Here are 30 of the 40 I need, all painted by Shaun McTague and high-lighted by me. Most of the riders are Aventines on a range of horses including some plastic LotR steeds that actually work quite well, being very animated. Once I have the remaining 10, I shall get basing!
Posted by BigRedBat at 20:02 No comments:

Email ThisBlogThis!Share to TwitterShare to FacebookShare to Pinterest
Labels: Parthians

Turning out the lights 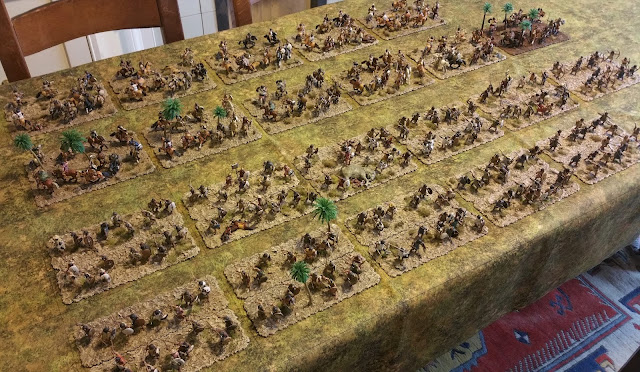 Over the summer and autumn, I've been refitting and extending my Numidian army. The above photo is of the light troops, who will form just over half of the completed army. So far, I have 22 units of nine light infantry and 22 of  five light cavalry, grouped into pairs (for TtS! players, they will be 2 hit light units each with 4 ammo). None of the bases are properly flocked, yet, I have that joy to come! 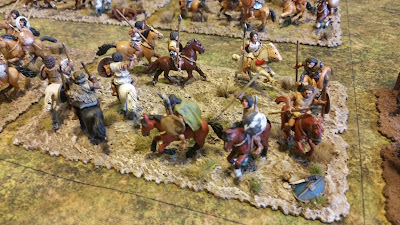 All are based on my magnetic "bat bases" which are 19cm wide. They fit together in pairs with a disguised seam. The cloth they are on is the sagebrush steppe design (which is much greener than the Deep-Cut photos suggest) and which is great for North Africa. 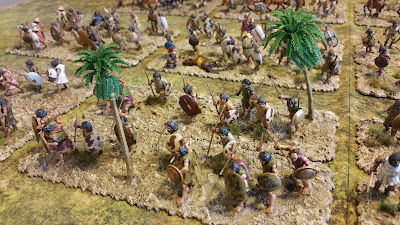 A lot of the minis were painted by Shaun McTague and Nick Speller, others came from eBay. I even painted a few, myself. 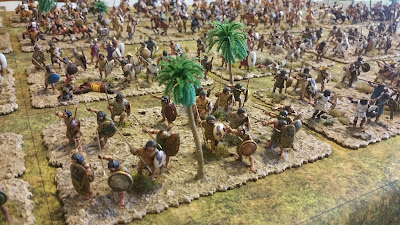 The minis are a mix of the excellent Foundry Numidians, Foundry Greeks and some A&A miniatures for variety. I do love the Foundry range- next time I see them I'll suggest they add some more minis to round the range out. 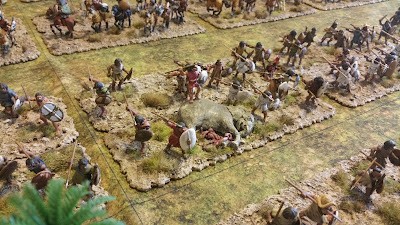 The other half of the army (not shown) will comprise King Juba I, General Petreius, Marcus Labienus, Spanish and German heavy cavalry, a mass of formed infantry and, of course, the elephant corp.

The completed army will have its first outing on the next Wargames Holiday Centre Ancients weekend- 31st March to 2nd April 2017. This time Mark Freeth and I have booked a large room at the Basingstoke Hilton hotel to accommodate what promise to be four (perhaps five) extremely large games. I'll talk more about the other games in the coming weeks, but they include a rather larger Successor game than was Raphia. We have a maximum capacity of 20 but are already more than half booked so if you fancy coming please email me or Mark, ASAP.
Posted by BigRedBat at 12:03 No comments: