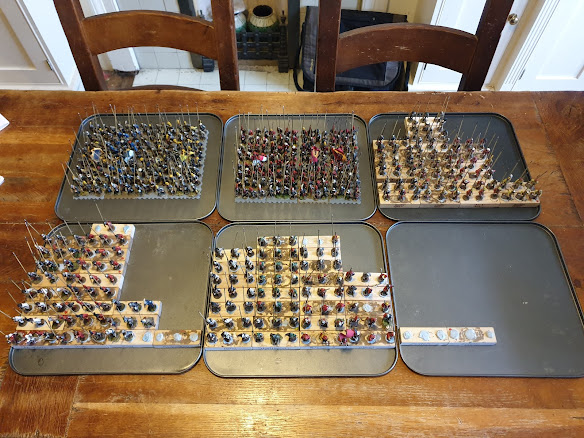 I've been busy over Christmas/January on the Swiss Project, but haven't posted any pictures. Here's an update. Above are the troops painted so far- mostly by Shaun McTague, and finished by me, but including contingents from David Imrie.

I've planned 18 contingents of 32 figures, each representing a canton or part of a cantonal contingent, plus command, heroes and lights. So far 8 are finished, 5 are mostly done, 2 are partially done and three haven't been started. I estimate I'm over 70% of the way there. 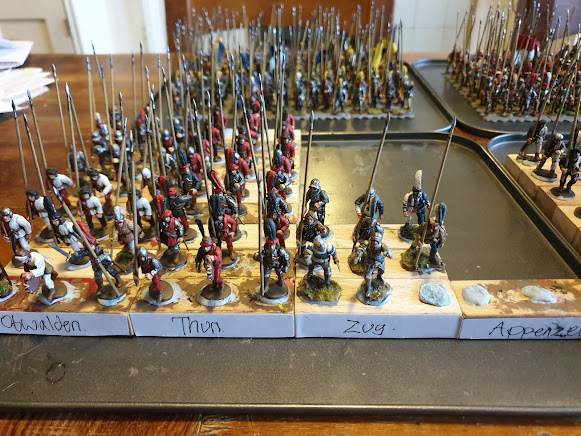 The new contingents are forming up... 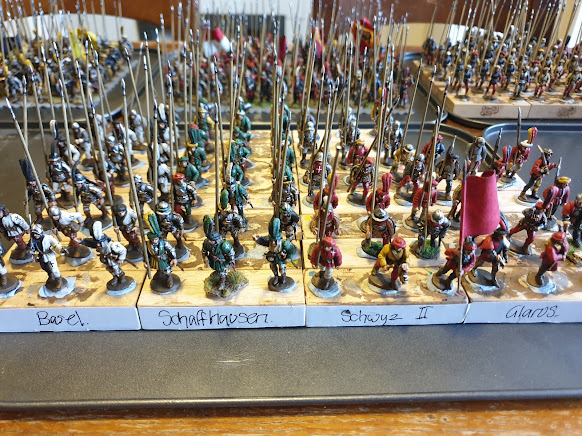 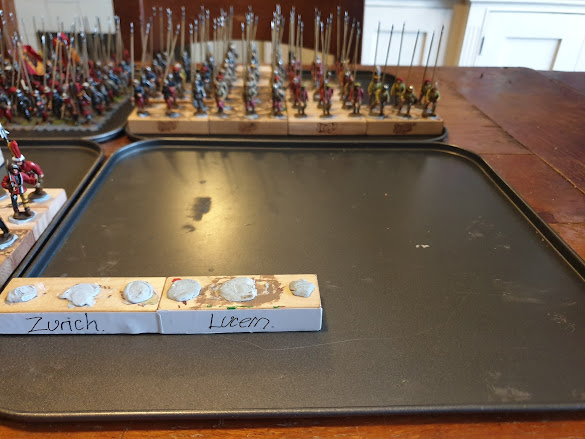 I've prepped most of the minis for the final contingents, but they aren't yet off to Shaun to paint. The group at the back are those in non-cantonal colours.
There are also four command stands, 18 heroes, 70 light infantry and 10 light cavalry to do- perhaps half of these are painted. I hope to finish painting the pike by the end of February and, I suppose, there is a month's work to do on the lights. After that there's the grouting and flocking. But it's all coming along nicely!
I've started to think about a huge To the Strongest! game at a future show using these, the most attractive option is Morat 1476, for which I'll need perhaps 450 Burgundians. :-/
Posted by BigRedBat at 11:53 8 comments: 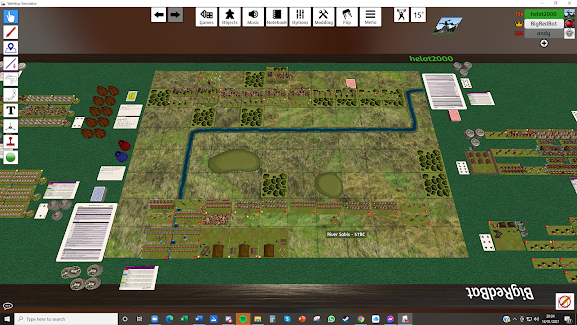 We've just started playing an online To the Strongest! tournament called Hannibal Ad Portas, this week I fought my first battle. That's my vast Italian Tribes army at the bottom; 16 victory medals - that's a whole lot for a 130 point army. I played fellow veteran blogger Monty from the US, who had Spanish. It wasn't a game of any great tactical subtlety; we just had at it!  I narrowly pipped him by one medal, once I eventually remembered how the rules work. Below is an in-game shot. 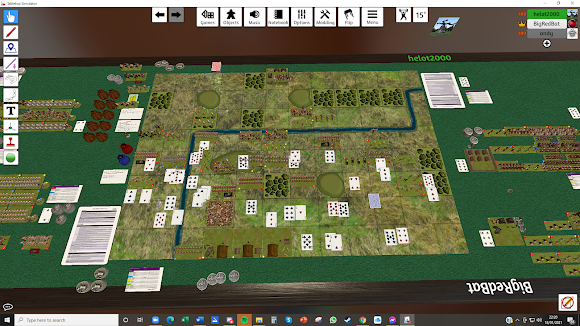 If you fancy joining the tournament, which is, I suspect, the only ancient big battle tournament running in the world, just now, please email me and I'll put you in touch with Antony, the organiser. Its very good natured and very international in its nature, and a really good way to learn the rules. Or you can just watch us play online, if you like.

In other news I've released some more coloured activation and stratagem chits, this time in red and dark blue.

The new stratagem tokens are single sided (plain red or dark blue on the reverse). You can find them, here.
Bigredbatshop.co.uk
Also I've received a major restock of bases. Pretty much everything that I'd run out of is now back in stock.

That's if for now- I hope to be able to show some more Swiss in a day or so, as that project grinds unremittingly towards completion. 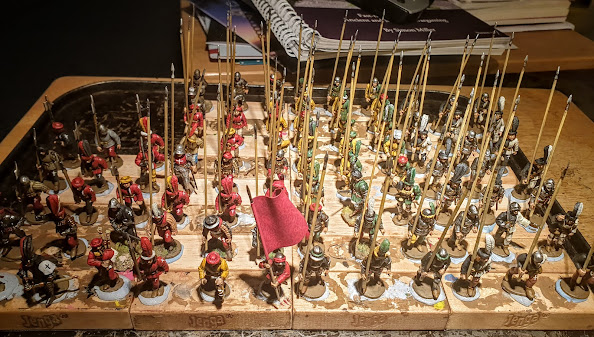 Over Christmas and New Year, I've been chipping away at the edges of my Swiss project. I prepped 100+ plastic and metal Swiss, and detailed the 84, above, that Shaun McTague mostly painted, the bulk of the next four contingents - Glarus, Schweiz, Schaffhausen and Basel. They will be bulked-out with un-uniformed Switzers. My plan is to get the bulk of the remaining 250-ish Swiss finished, and then base them all at more-or-less the same time.

This is my first post of '21 - let's hope we all have a happier year, with rather more wargaming than the last one! I'm very much hoping to be able to run some big games, once we are let out to play, and join in some competitions, too. In fact there's an online tournament starting on Monday- Hannibal at the Gates- mail me if you would like details.

Following on the heels of last year's successful TtS! 1066 and Kingmaker tournaments, Hannibal Ante Portas will be the next on-line To the Strongest! tournament, starting next week.

The tournament, organised by chum Antony, is set during the period of the 2nd Punic War 218 BCE. Players will fight with a variety of armies from the period – Gallic, Hellenistic Greek, Imperial Seleucid, Later Carthaginian, Later Macedonian, Numidian, Parthian, Polybian Roman, Southern Italian Tribes and Spanish, over 10 battlefields that take their inspiration from actual battlefields from the classical period – Lake Trasimenus, Metaurus, Cynoscephalae etc.

We'll be playing online using Tabletop Simulator, which is available on Steam.

The tournament will begin with a ‘pool’ stage that will start on Monday 18th January 2021 and finish on Sunday 14th March 2021, during which players may play as many of the other players in the tournament as they choose.

At the end of the pool stage, the top 8 players, based on their six best results, will then go forward to the knock-out stages. It is expected that we will have a number of players with the same points so we will use the following as the ‘tie breaker’ – Number of Decisive Victories in the 6 best results recorded, followed by, if required, the net Number of Medals Captured.

The week commencing 22nd March is scheduled for the semi-final, 3rd/4th place battle and the battle for the title of Hannibal. There will be prizes at the whim of Antony and Simon.

Simply message Antony (aka antman1805), either through the TtS! Forum or the TtS! Discord server – https://discord.gg/4HqHRC7 ,  giving him your “Discord” handle and name and he will record you as a participant. Alternatively you can email Simon and he will forward it to Antony. Please also let him know which country/time zone you are in to help with arranging games. Antony will need to share names and email addresses in the form “simonmiller60 at gmail dot com” with the other participants so that players can contact each other to arrange games (if this is a problem for you, let him know, there may be a work around). As with previous TtS! tournaments we are looking for players from across the globe, who can't usually make it to the UK-based tournaments or, indeed, any other tournament at the present time.

Even if you are a newbie to the To The Strongest! rules or not even played them before please get involved. We have a great group of players who will be happy you teach you both the game mechanics and how to use Tabletop Simulator- you will be a battle-scarred veteran, by the end! Do please come along - we hope that the card gods will smile kindly upon you. 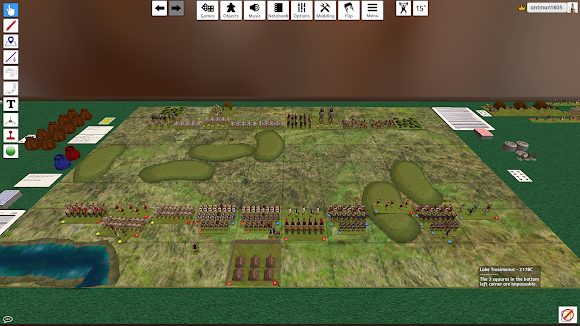 Posted by BigRedBat at 14:40 No comments: