On Sunday I'm driving up to the Hereward Wargames Show in Peterborough to help Ibn el Scrivs and Santiago Morris run an El Cid Game featuring minis from their collections as seen in the wonderful Warhammer Historical El Cid book. We'll be using To the Strongest! rules and in particular, the new Spanish, Andalusian and Moorish lists. I do hope I'll run into some of you there! 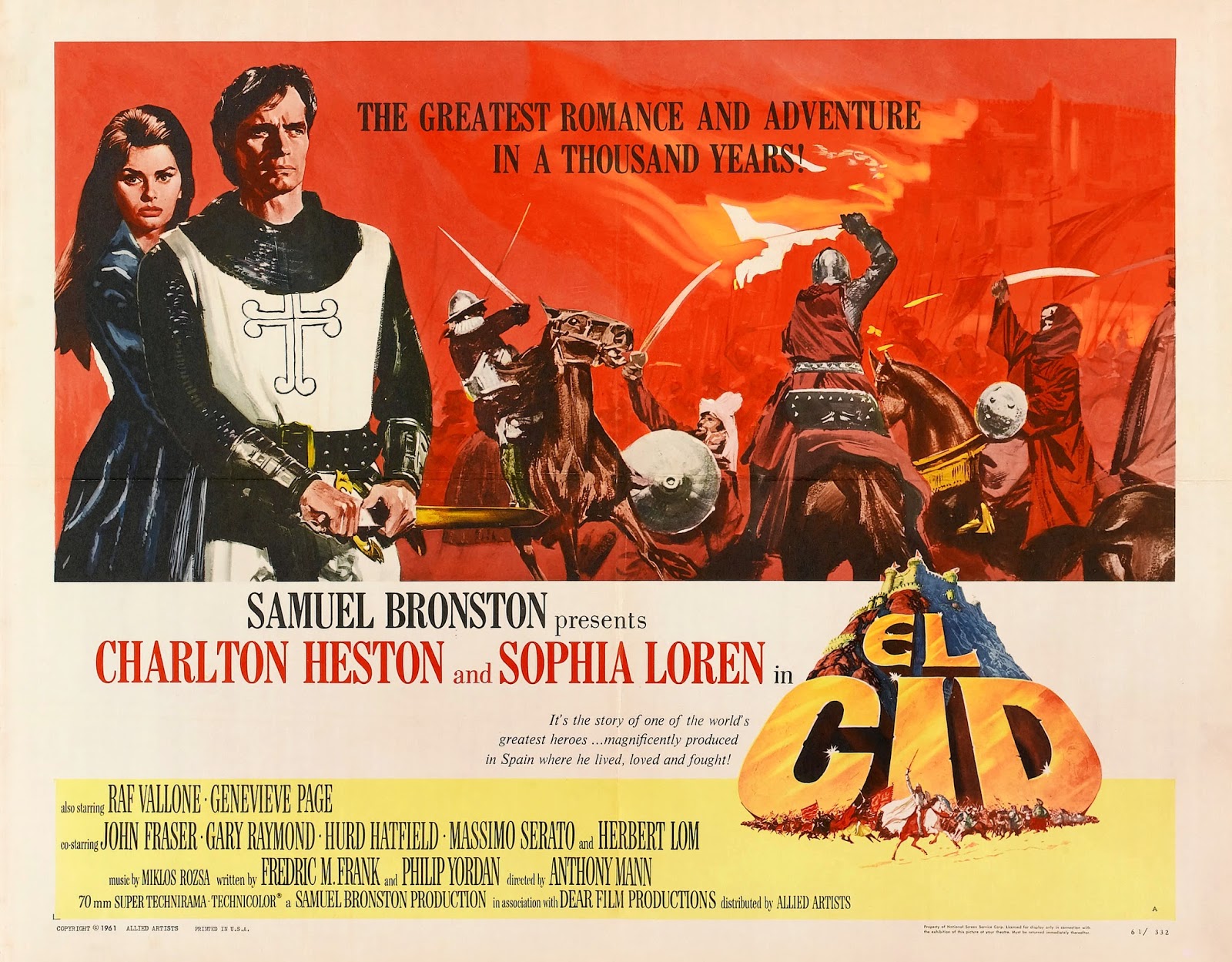 This afternoon, by way of research and to get into the right mindset, I plan to watch the film. It's a hard life. ;-)
Posted by BigRedBat at 13:20 No comments: 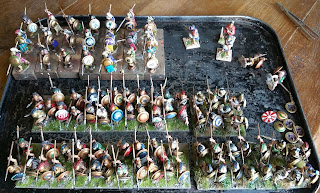 Above, I've been painting some additional hoplites to provide a third rank for the three Athenian units at the front of my painting tray.

Below, I've stuck 25mm extensions onto the back of the existing unit bases using superglue- each of the finished elements will be 60mm wide by 75mm deep. Later I might also add a small extension to the front of each base because the spears currently protrude forward somewhat and it would be a good idea to protect them. 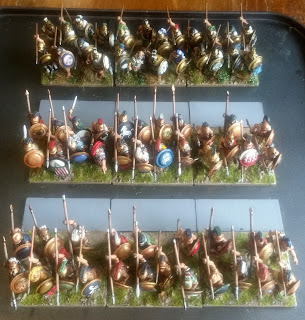 And below the new miniatures have been stuck in place using wood glue. I always use wood glue because it is slow to set and allows repositioning. Moreover, if one should ever need to re-base, the job becomes a whole lot easier! 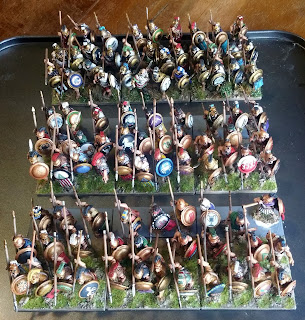 With the three Athenian units nearing completion, my mind turns towards Thebes and also the minor states such as Sicyon, Messene and Mantinea. I am pleased to report that I have located some of the former, conveniently located in the lead mountain of one of my painter mates...  :-)
Posted by BigRedBat at 14:20 No comments: 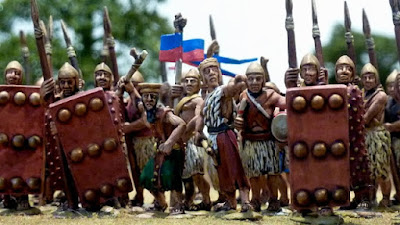 I've just uploaded a new booklet for To the Strongest! covering the Third Millennium BCE and including Sumer, Akkad and many more lists, which were largely written by mate Happy Wanderer who runs the excellent Sumer2Sargon blog (the pic is of one of the Big Men from his blog). They can be downloaded for free from here in the BigRedBatshop.

Posted by BigRedBat at 12:08 No comments:

I'm coming to the end of my Foundry Athenians and want to get my mits on some of the World of the Greeks Thebans, and some more Spartans.  If you have any painted or unpainted that you'd like to sell or trade, please drop me a line.
Posted by BigRedBat at 12:09 No comments: 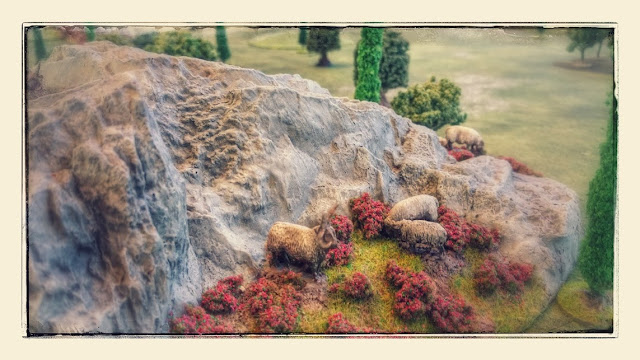 This hill was a corner piece from the recent SELWG game; there was quite a bit of interest in it. It stands around 6" tall and is built from some old OOP foam railway terrain and features the excellent Gripping Beast Manx sheep.
Posted by BigRedBat at 17:32 No comments:

This lovely unit was painted by the most illustrious Saxon Dog. It used to be Impetus-sized but David very kindly painted another 6 minis to match so that I could extend the base to the 18cm frontage I use for most of my personal TtS! gaming. 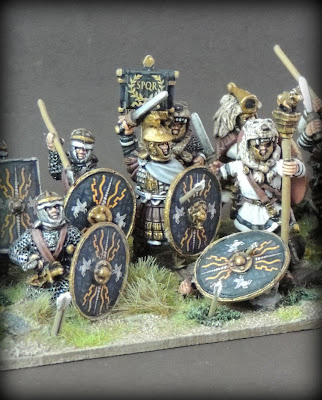 I love the sculpts in this range which is sold by A&A Miniatures but which was sculpted by Adam "Smithy" Smith now at Aventine.

I added some spent arrows to the base and shields; I figure that they will mostly do service in the East where a hail of Sassanid arrows will be a regular event.

This cohort has a full complement of supporting light troops, which can be seen here.

I have a couple of units of legionaries already based and various others partly painted, to there is a distinct possibility that I will be able to get some Middle Roman gaming under way in the spring. I'm very curious to try Sam Mustafa's coming Aurelian rules and would also love to write and run a "To the Strongest!" campaign book loosely based on Harry Sidebottom's Ballista series.


If you look carefully in the below photo you can just make out where I've extended the base by 3cm on each side. I have a casualty figure that I can use to indicate when the cohort is disordered.

Posted by BigRedBat at 16:35 No comments:

On Sunday I motored from Alexandra Palace in North London to Crystal Palace in Sarf London, for what turned out to be a very enjoyable day at the SELWG show.

This year I took a very portable ancients game.  Instead of the usual heavy terrain boards, I brought a large rubber mat and two of the Deep-Cut studios terrain cloths that I have recently started importing. I brought a relatively modest game, too, with only around 500 Spartan and Athenian minis, around 110 each points if you know To the Strongest! This lot weighed together was less than half the weight of my usual gaming load, and still looked very satisfactory.

Here are the Spartans in their crimson and bronze simplicity:

...and again from the other angle: 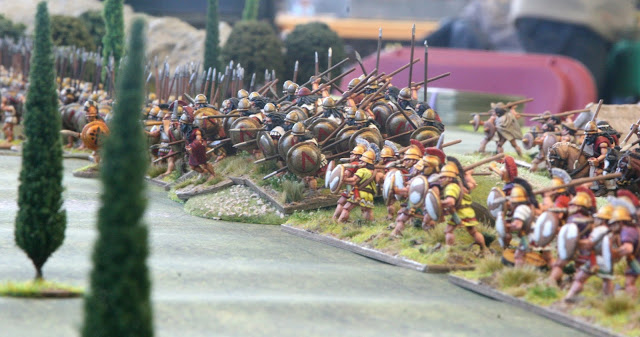 The Athenians (above) are an army that has only just reached critical mass; I'm painting more up for the coming Ancients Weekend at the Wargames Holiday Centre. 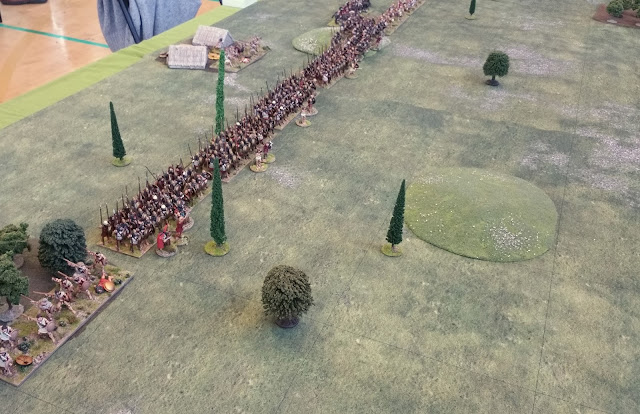 Above, I've re-flocked some hills to match the new mats- I've very pleased with them!

We played two games to completion; one lasted 90 minutes and one 2 hours. The Spartans lost their general five minutes into the first battle (stabbed in the back by the "Infamy, infamy they've all got it in for me" card) but nonetheless still came close to winning. They triumphed in the second game. Everyone seemed to have a lot of fun. I have no photos of the game in progress but there are some on Big Lee's blog, together with photos of the other games.

The SELWG club members were very helpful and friendly and I was delighted that the game was nominated in several categories, coming second in one (?) and winning "most child friendly" courtesy of  young gamers Emily, Alex and Nick (the latter has been playing TtS! since he was 8!). This was great since I felt the calibre of the games was really high this year and because I always hoped the game would be one that could lure in a new generation of gamers.

A big "hello" to everyone I met- there were so many of you! Particular thanks to those who played the game, the SELWG team for all their hard work, and to Ian for his duties as sherpa and photographer.
Posted by BigRedBat at 11:51 No comments:

I've been a busy boy for the last week or so with very little time left over for blogging, but here's a shot of my painting tray, where I've just based up two units of Athenian hoplites that I bought earlier this year mostly from Steve Jones and Steve Marshall.  I'm really pleased with them- a couple of Steve Jones's freehand shields (the crab and red running S shield) are absolutely stunning.  I still need to flock them and perhaps add a couple more transfers. After SELWG I'll add a third rank.

I'll be running a participation game at SELWG at Crystal Palace on Sunday- if you are attending please say hello and turn a few cards, if you have time! This will be a modest game by my standards but quite a pretty one, featuring Spartans and Athenians slogging it out on a pair of my new gridded Deep-Cut mats. I won't be selling any TtS products at SELWG but if you want to order anything in advance you can collect and save postage.

...and finally, in other news, I've just published three new To the Strongest! El Cid-related lists which can be downloaded for free in the Early Medieval booklet. I'm looking forward to some El Cid gaming in Peterborough on Sunday 1st November with James Morris and Scrivs.
Posted by BigRedBat at 14:51 No comments: