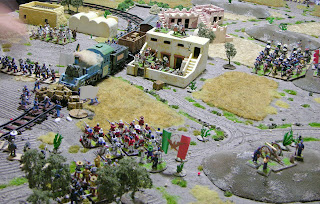 We played our biggest Mexican Black Powder game so far last night; six players, 30-odd units and a train!   Write up (and many more pics) on Dr Simon's illustrious blog.   A jolly good natured game, accompanied by a fine bottle of Fitou (Muswell Militia Wine of Choice), brought by Ian.
Posted by BigRedBat at 20:18 9 comments:

Zama collaborator Craig has a new blog, called Watch that Flank, with some of his lovely minis on it; do have a look!

The usual Zama suspects are plotting a game, next year, somewhere oop North...
Posted by BigRedBat at 18:17 5 comments: 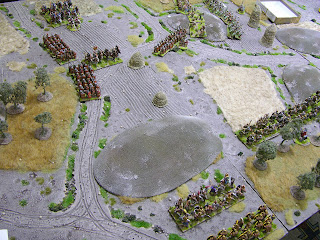 So here is a quick recap after last night's post; the Flavians are advancing from the top of the page (mostly free moves because they are in columns on a road; they struggled to make any command rolls).  The Villellian right wing has rushed forward and left wing is edging out of the olive grove; intending to hop over that ridge and rout the unwitting column of enemy legionaries.  The Vitellian right can just be seen at the top of the photo; it has rushed forward in a right hook, flanking the Flavians.
So all the Vitellian left needs is a decent command roll; instead they get a double 6 (fumble!).  Rolling a further 1, Ianicus consults the fumble table and... (below) 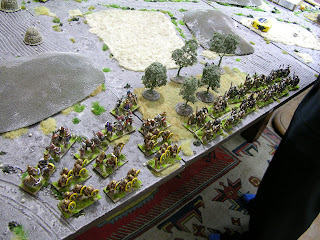 ...rather more than half of his army routs off the table.  Did we laugh?  Did we hell!
Still Ianicus had three his remaining units on the right, and these tore into the Flavians, wth their cavalry catching a cohort still in March column (below, at rear).  With a 9 dice to 1 advantage, could they rout it?  Nope.  Couldn't even beat it.  The dice were taking a distinctly Flavian turn.  However, they did manage to destroy a cohort of Flavian auxiliaries, and a numerus of skirmishers.  Meanwhile, half of the Flavian army were still advancing in their original direction, toward the fleeing, unseen ambushers (failed command rolls). 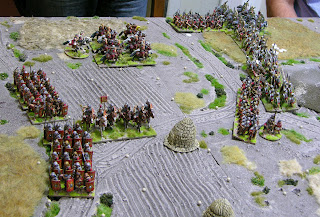 In the following turn, however, the Flavians rolled a very low dice and were able to make a triple move to counterattack.  Their legionary cavalry were able to hit the exposed flank of Ianicus left-most cohort, at the same time as a cohort of legionaries piled into its front.  The very large pile of white skull casualty markers behind it, did not bode well for the reaction test; predictably they fled, and we called the game. 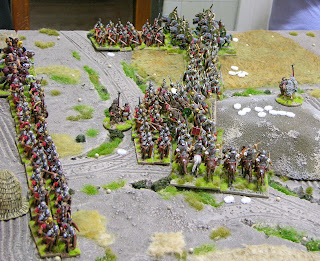 The rules worked well, in part because we are very familiar with Black Powder.  I think the game would best be first played with someone who has played before.  I umpired, and had to rush back and forth forward through the rulebook a fair bit, and had some difficulty finding things.  There was also one point where we couldn't find what to do and had to make it up; I think this will happen a lot and an umpire would be no bad thing.  But we did love the rules, and I am sure will get a great deal of use out of them.  In particular, they are perfect for the Early Imperial Roman campaign I've always wanted to run, and will encourage me to finish the rest of the troops I have planned.
Posted by BigRedBat at 22:11 7 comments: 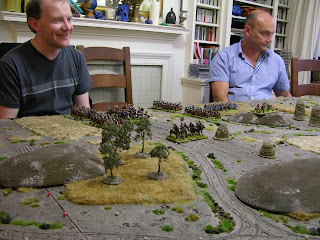 Tonight we had our first crack for the first time at Hail Caesar.  We fought a skirmish, set somewhere in Northern Italy, between a Flavian force of legionaries and auxiliaries, and a Vittelian ambush consisting of tough British and German auxiliaries, and a unit of armed gladiators.  The figures depicted  around 3000 troops on each side.

Above are the 2 Flavian Generals and their forces.  I could not fail to notice that one of the Roman commanders bore a strong resemblance to another illustrious Roman General:

His co-commander was Chrispus.  Their forces were deployed with the legionaries marching along the road in two columns, with cavalry and light infantry scouting ahead, and auxiliaries on their left wing (below).

The Vitellians were commanded by Ianicus (not shown).  His ambushing forces were hidden behind a low ridge and in an olive grove (below).  The gladiators are at the front, on the left, and the cavalry are in the background. 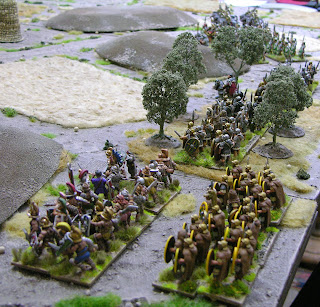 Tomorrow night I'll write an account of the battle which, it has to be said, was a blast.
Posted by BigRedBat at 00:26 7 comments:

Legions in the Principate era had 120 cavalry attached who acted as messengers, scouts and who provide an escort for the Legate.  In my 1:20 scale legion this equates to 6 miniatures, give 'em a click! 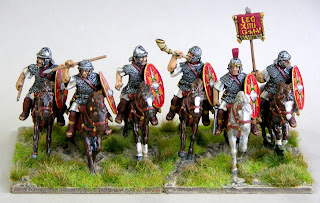 Equites legiones probably weren't terribly effective cavalry, perhaps not of the same high quality of the Auxiliary Alae, but the jobs must have been sought after as they were rather better paid than legionaries.  Like the original Equites Legiones, my Equites will be brigaded with similar cavalry, such as the integral cavalry from the Auxiliary Infanty cohorts, to form bigger formations for use on the battlefield.

These are all Black Tree Design Miniatures, who make the best larger EIR cavalry (although beware, their horse moulds are shot, loads of flash).  They were very nicely painted for me by a painter friend of Dr. Simon's, who is currently churning out a lot of EIRs for me.  I added a little highlighting, an army painter wash, varnish, basing and the writing on the standard.  Job done...
Posted by BigRedBat at 22:23 7 comments:

Here are some of the command figures from my recently completed XIIIIth Gemina Martia Victrix legion; the Aquilifer, Primus Pilus Centurion and Imagifer. 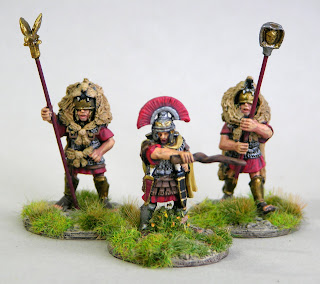 The Aquilfer (below) carries the legion's Aquila, or eagle.  He is a heavily converted Aventine figure (some of the Aventine Republican figures are very suitable for later periods); the eagle is Foundry and I added the mane on the lionskin, not bad, eh? 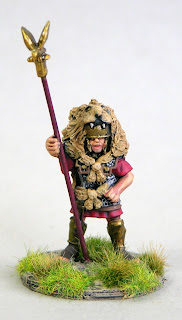 The Primus Pilus Centurion (or first spear centurion, for "Rome" fans), below, is an unconverted Gorgon Studios figure by Steve Saleh, one of his nicest, I think.  He has featured here before, but this is a marginally better photo than my last effort. 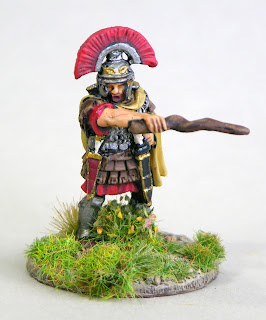 And finally, the Imagifer (below) carries the image of the reigning Emperor; in this case, Nero.  Another Aventine conversion with a Foundry Imago kindly donated by Mr Allen Curtis. 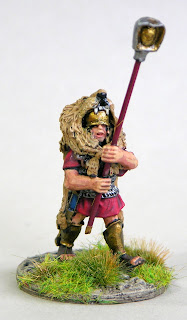 I've still got to finish the mounted legate and tribunes, and have various lictors and other supernumaries to paint.  But first I need to finish the effing French on my other blog... they really are doing my head in.
Tomorrow, I'll post a pic of the legionary cavalry....
Posted by BigRedBat at 21:10 6 comments:

My friend “Gloarmy” Greg Privat has been organising a “Big Parade” online event on 14th July, coinciding, I believe, with Bastille day.  For this reason, tonight (I can't post tomorrow) seems like a great time to post pics of my Early Imperial Roman legion, all together on the table for the very first time (all pictures click-able).

I started work on my EIR Legion when I first got back into historical gaming around 2005.  The first cohort was originally a mix of Perry and Saleh minis, from an on-the-spur-of-the-moment eBay purchase.  Comparing the two types, I found that I slightly preferred the taller Saleh minis, even though the number of poses was extremely limited, and there were no available cavalry.  The Perry's were ruthlessly purged.  I put together a 16 man cohort, decided that they would look better as 24 man cohort, and then that I needed 9 more of the same!  I’ve added a couple of cohorts, and some supporting troops, each year.  Around half the minis I pained from scratch, and the balance are repainted from eBay purchases. 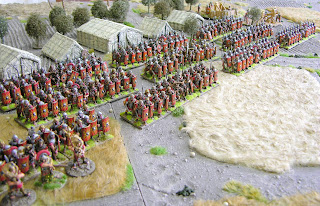 So the 10 Cohorts; the 1st Cohort (above, left front, and below, in closeup) are BTD, with Foundry shields, and the other 9 are Foundry figures, with some Crusader (and Games Workshop!) officers.  The Foundry Caesarian range provided most of the signifiers and cornicers for the legion.   All the shield designs are LBMS. 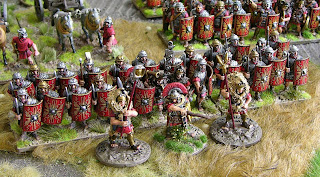 I recently added a couple of heavily converted Aventine minis as the Aquilifer and Cornicer (not quite finished, more anon), and the excellent Gorgon Miniatures Primis Pilus.  The 1st Cohort is only a standard size cohort at the moment, and I will ultimately replace it with a 40-man Foundry Cohort, to represent the larger Trajanic formations.  I'll re-use the BTDs in another legion that I’m planning. 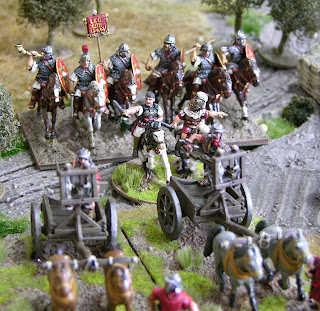 The Black Tree Roman cavalry are half decent sculpts.  I recently had the 6 cavalry of the legion (above) painted for me by a mate of Dr. Simons, and he did a fine job on them, too.  I merely gave them some highlights and a wash.  The basing is not yet finished, so I'll post a proper picture in a few days time.  The legion is very generously provided with artillery support (5 various ballistae), because I’ve always wanted to do the siege of Jerusalem.  Maybe next year...
The legion represents Legio XIV Gemina Martia Victrix, that defeated Boudicca.  Unfortunately my Tribunes and Legate aren’t quite finished; they have missed the parade.  But I’ll post pics of them soon.  Also none of my Auxilia are posted; they will be parading separately, at a later date, after I've based some reinforcements.  Then I'll need to look at painting the Praetorians and some more riff-raff supporting troops, like these gladiators...  I eventually aspire to a couple more legions and a similar number of supporting troops.
Posted by BigRedBat at 22:46 18 comments: 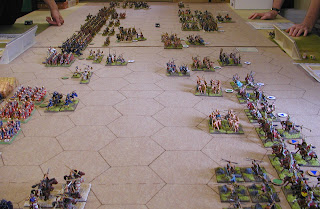 This is Dug Page Croft's epic Commmand and Colors refight of the Battle of Arausio.  This battle, in 105BC, between invading Germans and Romans, ended in a terrible defeat for the latter, perhaps worse than Cannae in terms of number of casualties.  It is thought to have led to the reforms of the Roman army, under Marius. 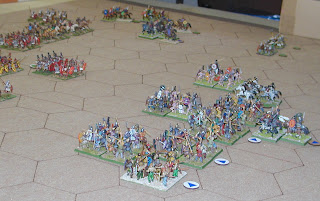 Apparently the Germans slaughtered the Romans in both of Dug's refights!  If I remember correctly, they won when I played the game, too, some years ago.  Warband can be pretty hot, in C&C.
Posted by BigRedBat at 19:49 2 comments:

Out microclub, Muswell Militia, boasts that we can fit our entire membership in a telephone box; well not this week!  No less than 5, yes 5, players were present for a very enjoyable game of Black Powder.  In fact, we were only missing Gloarmy Greg! 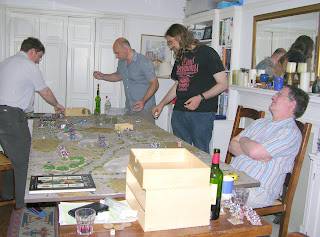 The game went very quickly and there are signs that we are mastering the rules.  We are now able to use all the available figures and bring the game to a conclusion in around 90 minutes. We used Dr. Simon's Mexican Intervention figures- there are rumours of the arrival of reinforcements and possibly a campaign setting.
I've been away because I've been very busy painting Napoleonics, but I'll be getting back into ancients for at least a week or so because I need to finish some Romans for Greg's "Big Parade" challenge on 14th July; I want to be able to deploy my complete Early Imperial Roman Legion, for the first time.
Posted by BigRedBat at 20:11 8 comments: