The final 18 new recruits (or Tirones) have arrived for the last 2 cohorts of my legion, and are spray primed and ready to go.  I've almost finished the 8 command figures at the front; I estimate it'll take 2-3 weeks to finish the unit.
I have just remembered why I like to get others to paint my minis for me.  ;-) 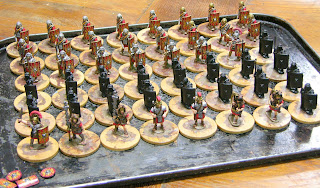 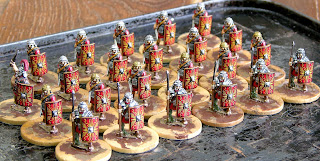 These are roughly half of the legionaries for the final 2 cohorts of my first EIR legion; they are a substantial repaint of an eBay purchase.  Tonight I start on the second, harder half of the job, the 25 legionaries that I need to paint from scratch.  Roughly 3 weeks work, I reckon.
I just love that LBMS shield design....
Posted by BigRedBat at 18:53 8 comments:

This week, I've finished the command stand for my Praetorian cavalry.  All pics are clickable. 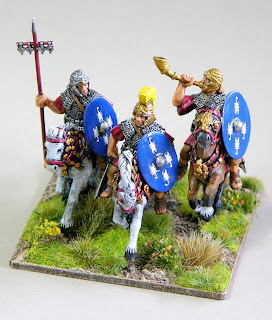 The riders are BlackTree, shields trimmed down from Warlord Games, horses A&A, and transfers VVV.  I'd like to thank Steve from the WAB Forum for sending me the Wargames Factory standard (I'm not 100% sure it is historic, but it looks great!).  Allan Curtis is sending me an imago, which I'm going to use with another, cavalry Ala that I intend to start in a month or so.  A full cavalry Ala in 1:20 would have 24 figures and would look very fine, indeed, on the table. 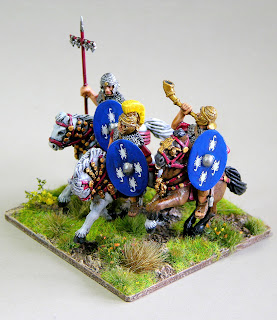 The A&A horses, which I think were sculpted by Adam (now of Aventine) are superb.

Here are all the Praetorian cavalry, deployed together; a fine sight!  I'm very enthused with the Black Tree cavalry riders and have ordered an awful lot more of them.
Posted by BigRedBat at 12:14 10 comments: 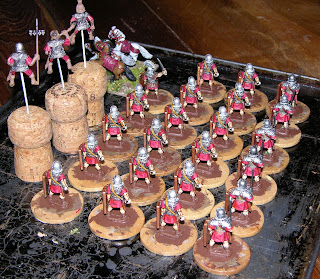 A quick in-progress shot of the figures that I bought on eBay, and which I amcurrently retouching.  It takes a fair bit of time to tart up two dozen even quite respectably painted figures!  It'll take a lot longer to paint up the other 2 dozen figures from scratch.  Happlily, the original painter, like 90% of all others that paint Romans, went for red tunics.
In the backgroung are the 3 figures for the command stand of the Praetorian Equites.  Steve Marshall from the WAB forum has kindly sent me some nice Wargames Factory standards (perhaps of dubious archaeological provenance, but very pretty).  If I can find a suitable imago I may stick this on top of the same pole.  Allen Curtis is sending me one, but I want to use that with the next cavalry unit I'm planning...
Posted by BigRedBat at 00:42 4 comments: 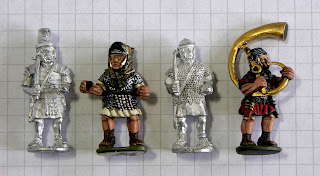 Someone was asking on TMP whether BTD Romans fit with Tin Soldier's.  I have a few Tin Soldiers and have shot a couple above (2&4) next to some BTDs (1&3).
I think one could just about get away with it, although I find the Tin Soldiers crude by comparison with the BTDs (big heads and stocky legs; something of the dwarf about them.  And that horn!).  Having said that, I have 6, they are painted and I might just base them up.
Posted by BigRedBat at 11:16 10 comments:

I've finally finished my Praetorian cavalry (except the command stand, which I hope to start this weekend).  The riders are Black Tree and the steeds A&A; shields from Warlord Games, spears North Star and transfers VVV. 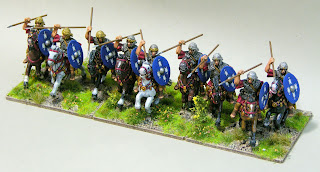 I'm really pleased with them.  I think the BTD rider figures are very nice (especially the helmets, have a click), and I plan to paint an awful lot more, especially as the proportion of cavalrymen in a Roman army was rather high.  Most of the others will be scruffier equites cohortales, though.
Posted by BigRedBat at 22:27 12 comments:

I've finished the heavy weapons company for my Viet Minh battalion, some others of which can be seen here.  It is now around 100 men strong.  I had better write some rules, soon!  All pics clickable. 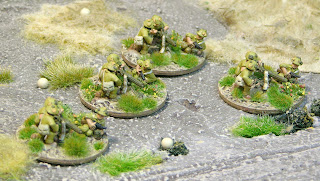 Here are the four maxim guns, from Liberation Miniatures, and very nice they are, too. 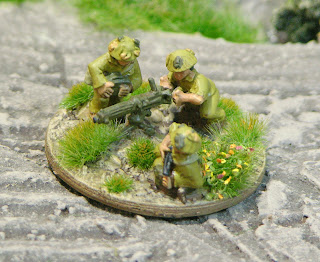 Here's a closeup.  Happily they are very similar in size and style to my Platoon20s.

...and here are their two 81mm mortars (one captured American, and one ex-Russian supplied).  Mostly Platoon20 minis, with some light conversions and one Liberation figure.  I'm rather taken with the signaller.  Who needs radios, anyhow?
Posted by BigRedBat at 21:04 5 comments:

I came across my 30 missing BTD cavalry, tonight, hidden in the back of a box.  Embarrassingly, the command figures I thought BTD had failed to send me in September were with them, so I've bunged BTD an apology, and an order for another 21 cavalry which should give me plenty to be going on with...
Tonight I played a second game of Command and Colors Napoleonics, which was even more enjoyable than the first.  We played the second Rolica scenario, which has just about the roughest terrain I've ever seen in a C&C game.  I managed to win, playing the heavily outnumbered French, which was very pleasing!  Some lucky rolling was involved... top game.
Posted by BigRedBat at 00:21 6 comments: 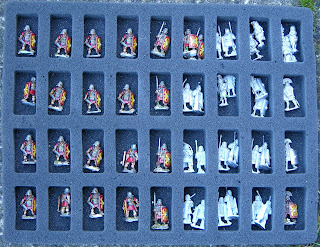 These are going to be the final two cohorts of my EIR legion.  Half are an eBay purchase; not too badly painted but need some work, including LBMS shield transfers  The rest need prepping.  I've also got the Gorgon Primus Pilus figure that Hank sent me some time back; should fit in very nicely!
Posted by BigRedBat at 09:29 No comments:

These chaps are the rank and file of the cavalry for my Praetorian guard cavalry elements; champagne corks seem an appropriate temporary base for these.  I'll eventually have 2 units of 6, as the cavalry detachments of the two 24-man cohorts I have planned.  I may eventually end up with 3. 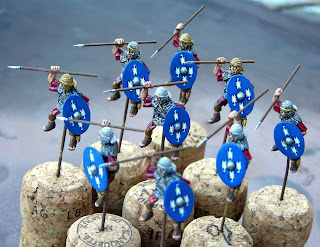 I've just taken advantage of a clear and sunny London day to gloss lacquer them.  It'll be a while before the unit gets finished, because the command figures I ordered from Black Tree Designs (in September, grrr) still haven't arrived.  I've chased and ordered some more.
I know, somewhere, I have another 3-4 dozen Black Tree cavalry, but can I find the blighters?  I've been scouring the lead mountain, but so far to no avail...
Posted by BigRedBat at 12:43 10 comments:

I've given some more though to what I'm going to paint this year, after the French Indo China, Ancient Germans/Laager and Marian Romans that I've previously mentioned as Q1 objectives.  I've decided to concentrate on Early Imperial Romans, because:-

But will I be able to stick to my plan?
Posted by BigRedBat at 19:16 9 comments: 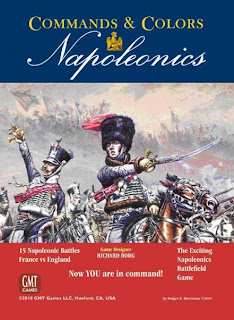 I played my first game of Command and Colors Napoleonics, tonight.   Now, I don't even particularly LIKE Napoleonics as a period, but I was very impressed with this game.  If you've played Command and Colors (Ancients), you can pick up the rules inside 15 minutes; yet, at the same time, the game play is different  enough  to give variety (my initial feeling is that the system is even better than the Ancients version).   Also the cards and the blocks are beautiful, which helps to make it a pleasure to play.  My impressions may be slightly coloured by the fact that I won, and drank half a bottle of a very fine French wine in the process!

Two things that I preferred about Napoleonics, compared to Command and Colors (Ancients), are that the impact of generals seems to be rather reduced (I've always thought them too effective in the latter), and that units become less effective as they suffer casualties.  I would have imagined that this latter feature would slow the game down, but it doesn't.  Artillery adds an interesting extra element to the game, and can combine with infantry and cavalry to deliver powerful attacks.  Richard Borg has given different nationalities of troops,different characteristics, which adds a nice flavour.
You can order it from here or your FLGS.  RTB, if you are reading this, you now have no excuse for getting your minis on a gaming table!  ;-)
Posted by BigRedBat at 23:18 2 comments:

Email ThisBlogThis!Share to TwitterShare to FacebookShare to Pinterest
Labels: Command and Colors, Napoleonics

These Foundry and Black Tree Ancient German figures were painted for me by Nick Speller, who certainly did a fine job!  He paints irregulars far better than I can.  I based them.  All the pictures are clickable.

Of course, they'll only be seen from behind, when advancing! 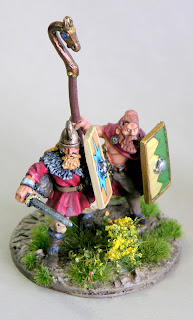 Here are their leaders, Silo and Italicus. 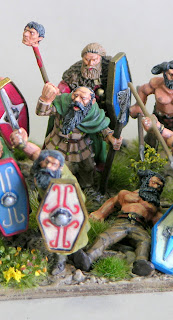 This old man, shaking his fist, is my favourite figure... 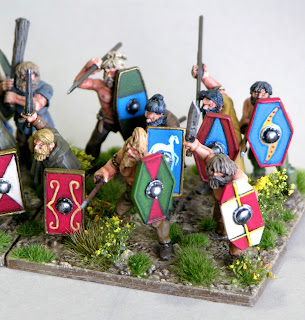 ...but I also really like the big guy, front and centre here.

Email ThisBlogThis!Share to TwitterShare to FacebookShare to Pinterest
Labels: Germans 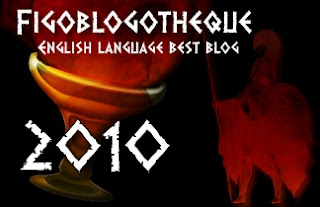 I just heard that this blog won the Figureblogotheque English Language Best Blog of the Year award for 2010, and would like to thank all those who voted for it!  Merci beaucoup!  I'm delighted to have won it.
If you don't know FiggyBloggy (my affectionate nickname for it) it is a blog roll of wargaming blogs, which is run by my good friend Greg Privat, in France.   I visit it, from time to time, to see what new wargaming blogs are out there; it is particularly good for foreign language blogs.  A good portion of the traffic to this blog comes frome there, and if you have a blog it is a pretty good idea to list it there.
What a nice start to the New Year!
Posted by BigRedBat at 23:03 18 comments:

Confessions of a Basing Nazi Part 5 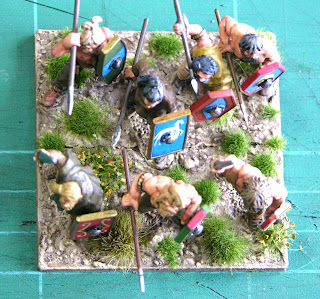 Here's the (almost) finished base from my previous post.  One can see the line of the crack between the two halves, but it is pretty well disguised and looks natural.  I was going to post the picture of the unit, but have decided, on reflection, to put a bit more Silflor on the bases, tonight.
Posted by BigRedBat at 13:04 4 comments: