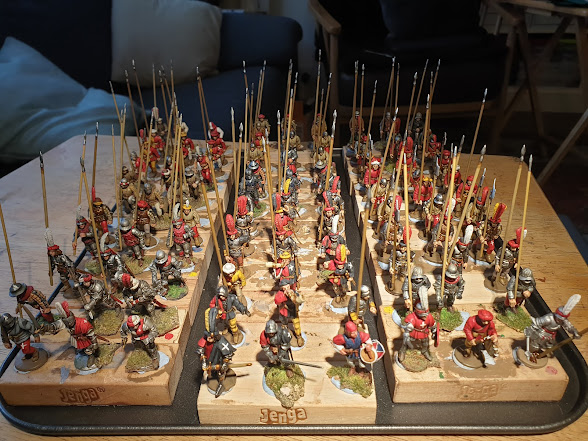 I've started work on the second pike keil. There are the next three sub-units, contingents from Solothurn, Bern and Schwyz respectively. Schwyz is almost done; it should take a week each to lick the other two into shape. 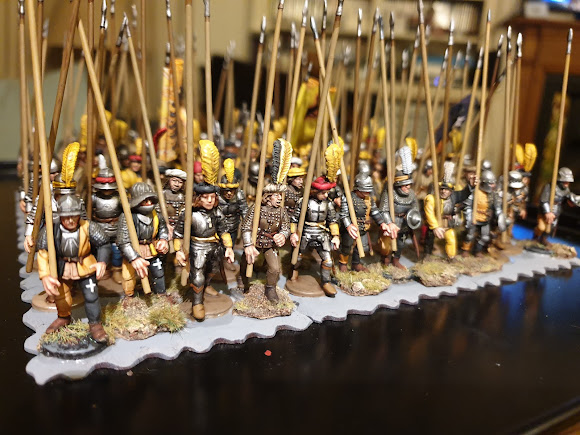 Here is the latest work in progress image of my Uri Swiss keil. I've now placed all 96 minis on their bases, although they are as yet ungrouted. 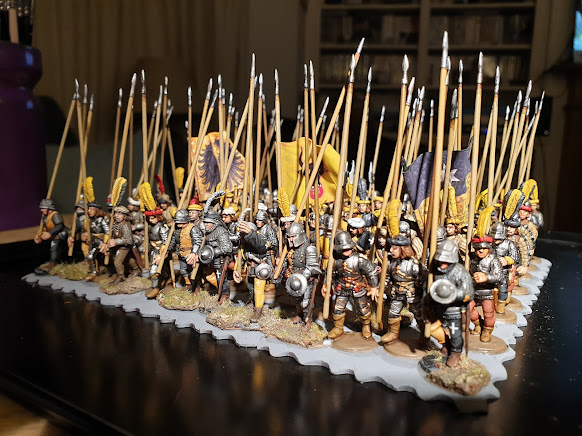 This shot shows the flags, from Peter's Flags and Flags of War. I've used small flags as the Swiss liked them on the small side. I went with a yellow and black theme to match the colours I used on the minis. Most of the figures in the front rank were painted by David Imrie, with the bulk of the minis coming from Shaun McTague. 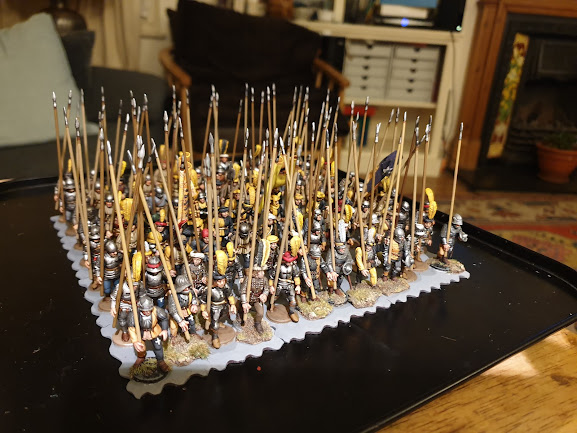 Here's the whole unit. I've built it so that I can field it for a 20cm grid, but by removing the central files of bases and some of the rear bases, I can field a sawn-down 48 man keil to suit a 15cm grid, for competition gaming on a 6'x4'. I have enough painted minis for two more of these, which I'll work on over the winter. I hope to eventually field four or five, and perhaps some early units with halberds instead of pike. The bases are all my FK&P13c's, which comfortably take eight minis each.
If you play TtS! you may have seen the Swiss lists in the free Medieval book and the special "field square" rule for keils in the Even Stronger supplement. It's a most unusual army, which I've fought against a few times in competitions; very hard to beat! I'm looking forward to trying it out, myself, hopefully in the spring.
Posted by BigRedBat at 11:23 9 comments: 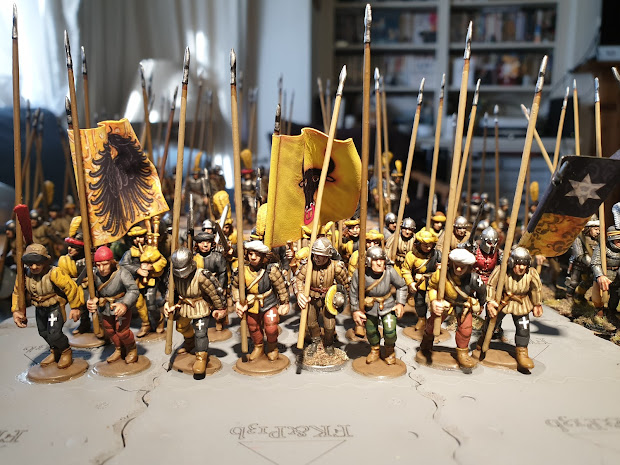 Last night I had a bit of a push on the first keil and finished the flags. I went with the Uri flag (Flags of War) and a couple of other flags in similar yellow/black colours (Pete's Flags), which tied in with the Uri colour theme. 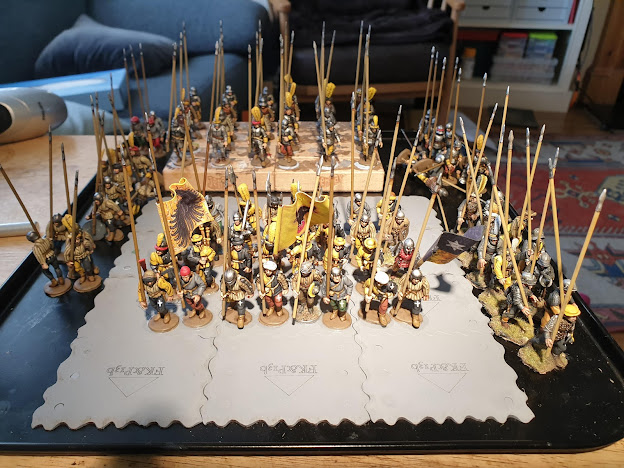 You can see that I've based the core of the keil, including the command, halberdiers and less-armoured pikes, many of these have cantonal colours. The better-equipped pikes will be around the outside- these will have partial or, in a few cases, full plate, and are in generally less bright clothing. 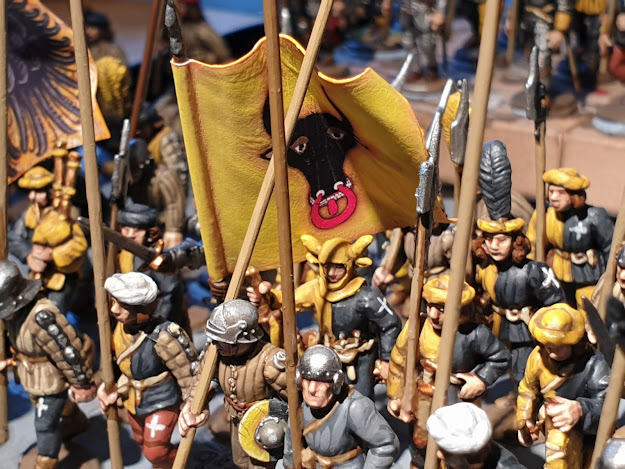 Here's the Uri flag which depicts an auroch- I slightly overpainted the very nice Flags of War flag- gives it a nice texture. Iain very kindly re-sized the flag for me to make it slightly smaller- I wanted to put it on a spear rather than a pike. These minis are mostly by Shaun McTague.

All things being equal, I should be able to get the other 64 minis on their bases, tonight. Can't wait to see how they look! I've had a quick count- I have another 200+ painted Swiss with pikes and halberds, so hopefully will have three keils "in the field" by Christmas.

The TtS! Kingmaker is now in its sixth and final week, and the players have ratcheted up a mighty 35 online Wars of the Roses battles between them, so far!

All of the terrain is based on WotR battles, as are the army lists. Antony Spencer, who designed, organised and is running it, has written a summary of the campaign, so far, including a campaign map. You can find it at this link on the TtS! forum. Fascinating stuff!

Posted by BigRedBat at 12:06 No comments: 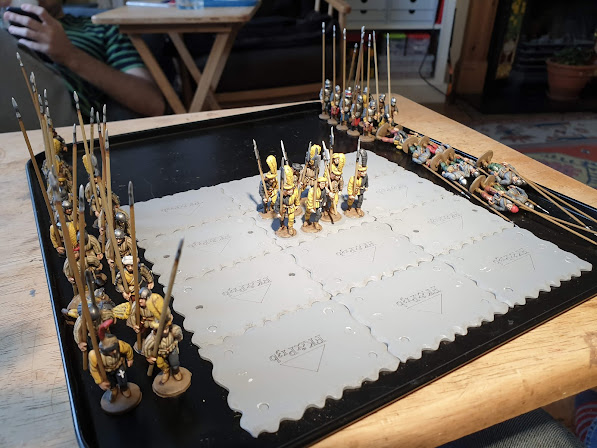 I've finally bitten the bullet and started to base some Swiss, that were painted by Shaun and finished by myself, earlier this year. I have accumulated several hundred minis- it's now a matter of assembling them into suitable units. This block will be mostly Uri. Other blocks are likely to be a mix of cantons. I'll need to paint/repaint the minis to get a suitable blend of cantonal colours. 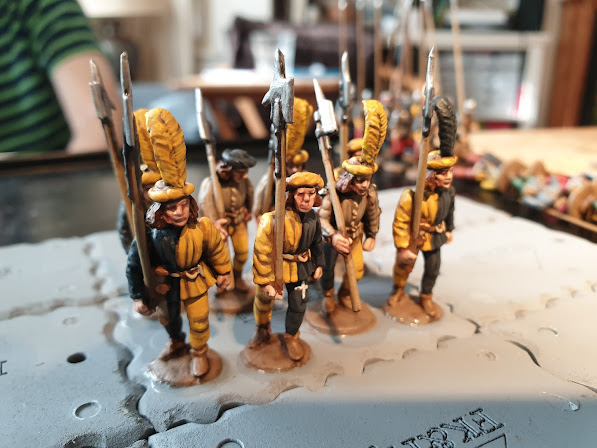 Each block will have a group of halberdiers at its core, with a colour party in front of them. The rest of the blocks will be pike or pike and command. David Imrie kindly sold me some Swiss pike, and I'll be mixing them in, too. Eventually I'd like 5 blocks of 96, but I'll start with two.

I'm looking at the bases, on the basing sheet, and thinking that I might make up some larger bases that could take 16 minis on each- fewer bases is always better! 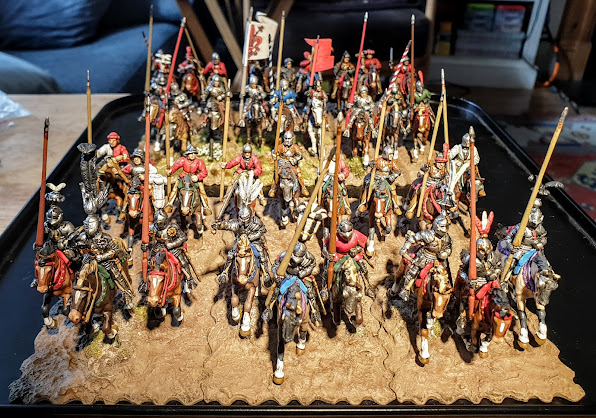 Here are my Florentine knights, still forming up for action at San Romano.

The more I get into the period, the more I discover- it's like hitting a moving target. In this latest incarnation I've added glorious tall plumes from Mirliton in Italy to most of the knights in the leading unit. Unfortunately, very few of the knights currently have the characteristic giornea tabards, and some even have tunics, which aren't particularly Italian. Once I get the next batch of painted knights back from Shaun McT there will be some swapping in and out. Any knights who no longer qualifies for the Florentine host will be used, elsewhere- the ones with tunics will be joining the Burgundian army. I'll add more full-faced helmets with plumes, too.

My plan is to have three units of 18 Florentine knights, and then to move on to Milan, replacing my current Milanese with 54 more Italian-looking elmeti, some with Milanese heraldry- then I'll either do the same for Venice, or perhaps base up some Burgundians. 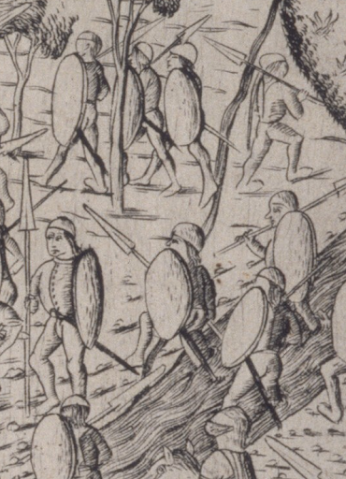 I need to model some spear heads for the bulk of my Italian infantry. These will be plastic Perrys, and I could probably fit spearheads onto the spear-shafts they come with. But from whence can I source the spearheads? They are an unusual shape and rather large - I'd estimate at least 8 or 9mm long - and I believe they are a sort of boar spear, without the cross bar. Any suggestions would be much appreciated! Plastic would be perfect since they could be glued in place, but I could drill and glue metal.

There was a lot of interest in my last Venetian post, so I thought I'd show a second WIP shot.

All of the minis are finished and based. The eight new minis (painted by Shaun McTague) are mostly on the right, but I mixed some in with the original minis, and vice versa. Similarly, I included some of the shields with Ian's Venetian transfers on each base- this helps the unit to look homogenous. I'm very pleased with the amount of variation in the clothing, colours and shield designs in the unit. It looks pleasingly non-uniform.

Just need to grout and flock the base- might take a week or two to get around to that as I want to do a batch of units together for flocking.

Email ThisBlogThis!Share to TwitterShare to FacebookShare to Pinterest
Labels: Venetians 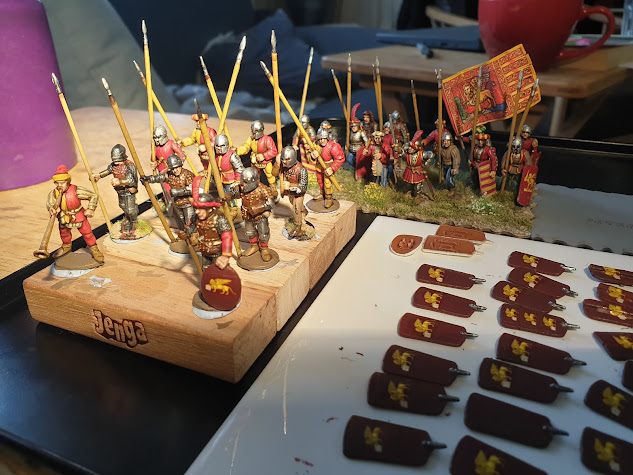 Recently, I've been busy modelling things but failing to post pictures, so here is an image of a unit of Venetian spearmen that I'm currently working on. I'm retouching and expanding my old 17-man unit to a 25 man unit on a 19cm frontage for the 20cm grid. All the minis are Perry plastics, with a few light conversions. The shields are pavises* decorated with Venetian lion transfers designed by my talented chum Ian Notter. I made up rather too many of these, and plan to use up the spares on a unit of crossbowmen. The background colour is "Venetian Red", which is pretty much a brown, in my books! 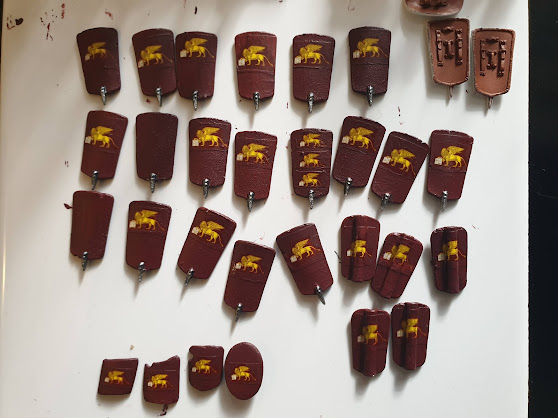 *If I was starting afresh, I'd give the unit oval shields like the one carried by the halberdier.
Posted by BigRedBat at 17:16 6 comments: 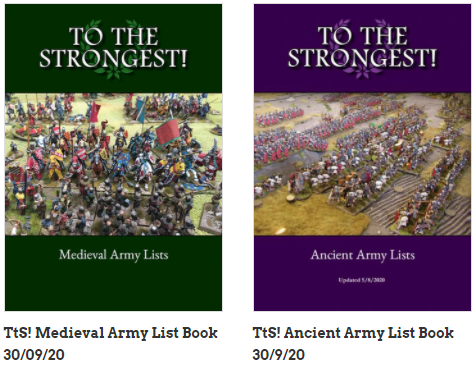 I’ve recently (30/9/20) published updated version of the army lists for To the Strongest! There are now a total of 242 different lists, many with additional content, and some now including images. The newly published lists are:

.If you haven't received a download link, you can download the eBooks, for free, from
https://bigredbatshop.co.uk/collections/all/army-lists
Posted by BigRedBat at 12:30 No comments: