A medieval bash with To the Strongest!

Last night I mate Ian and I had another play-test of the eponymous rules with medieval armies. Lacking any suitable minis, we used "Battlelore" plastic figures tacked to cardboard bases and the game was no less enjoyable, for this, although it does invite comparison with this rather more aesthetically pleasing play-test run by Scrivs and Mog. 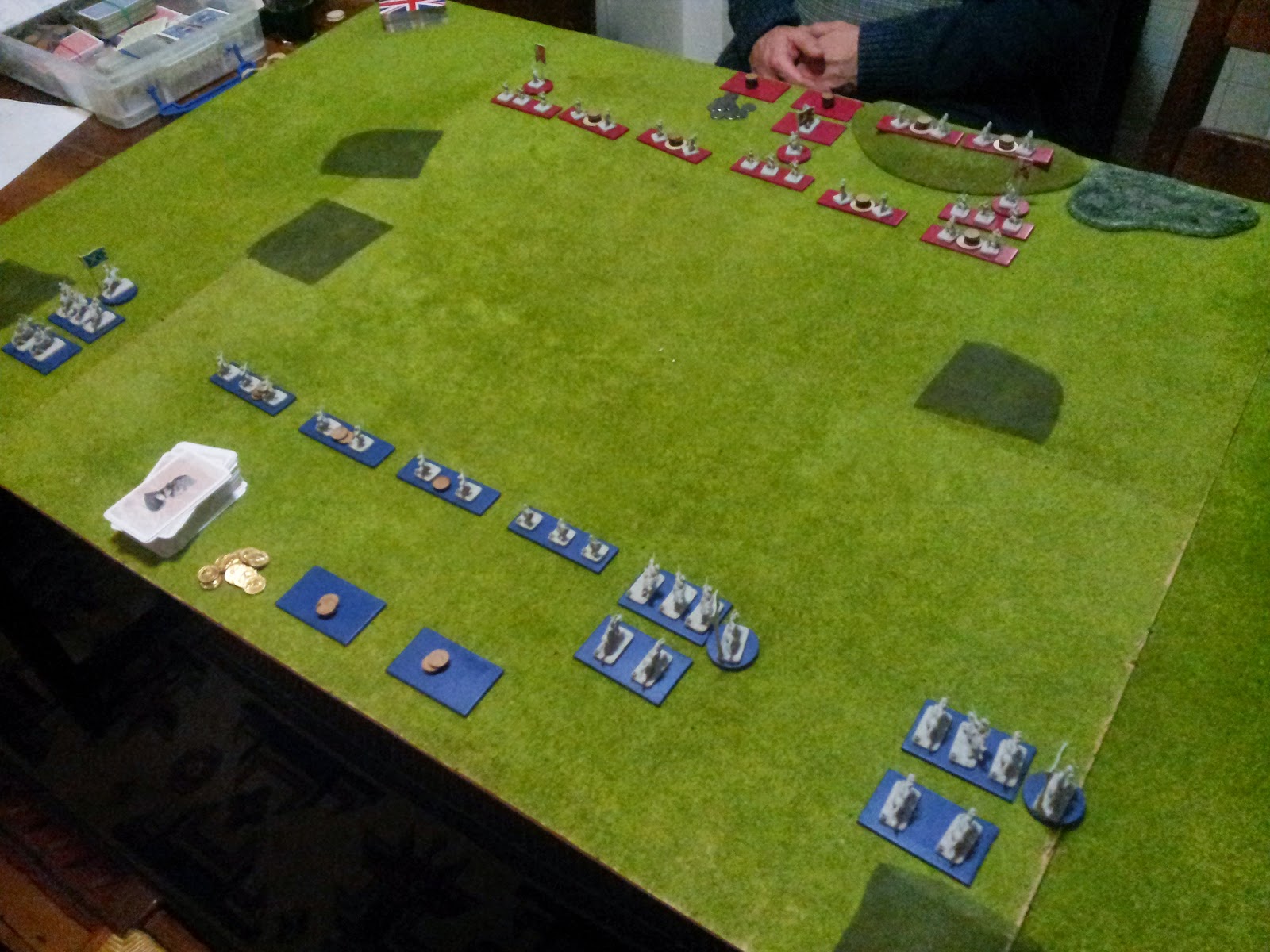 In the above deployment one can see that the terrain is relatively sparse- the English (top, red) have managed to position a couple of small woods on either flank, and a low hill behind them, but the French (bottom, blue), deploying second, have placed most of their cavalry on their wings with the intention of passing around the outside of these.  The English have deployed in depth so as to be ready to counter any outflanking move. 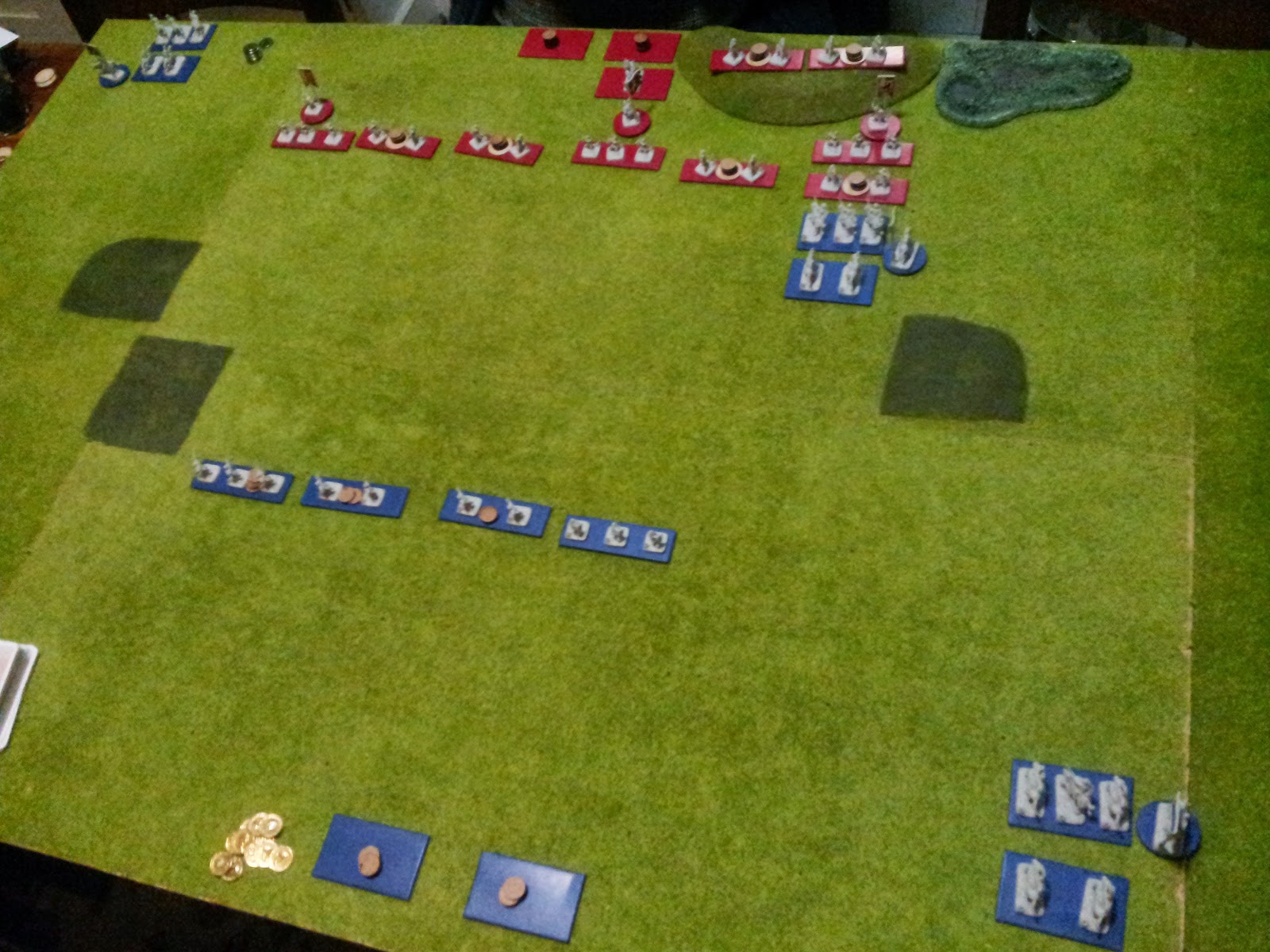 The French move first (above) and charge forward with their knights (unfortunately the right flank stubbornly refuses to move, after playing an Ace which their general replaces with another Ace). In the centre, though, the Dauphin rashly charges into contact with the English archers and on the extreme left the knights flank the English line.  The French bows and crossbows advance, cautiously. 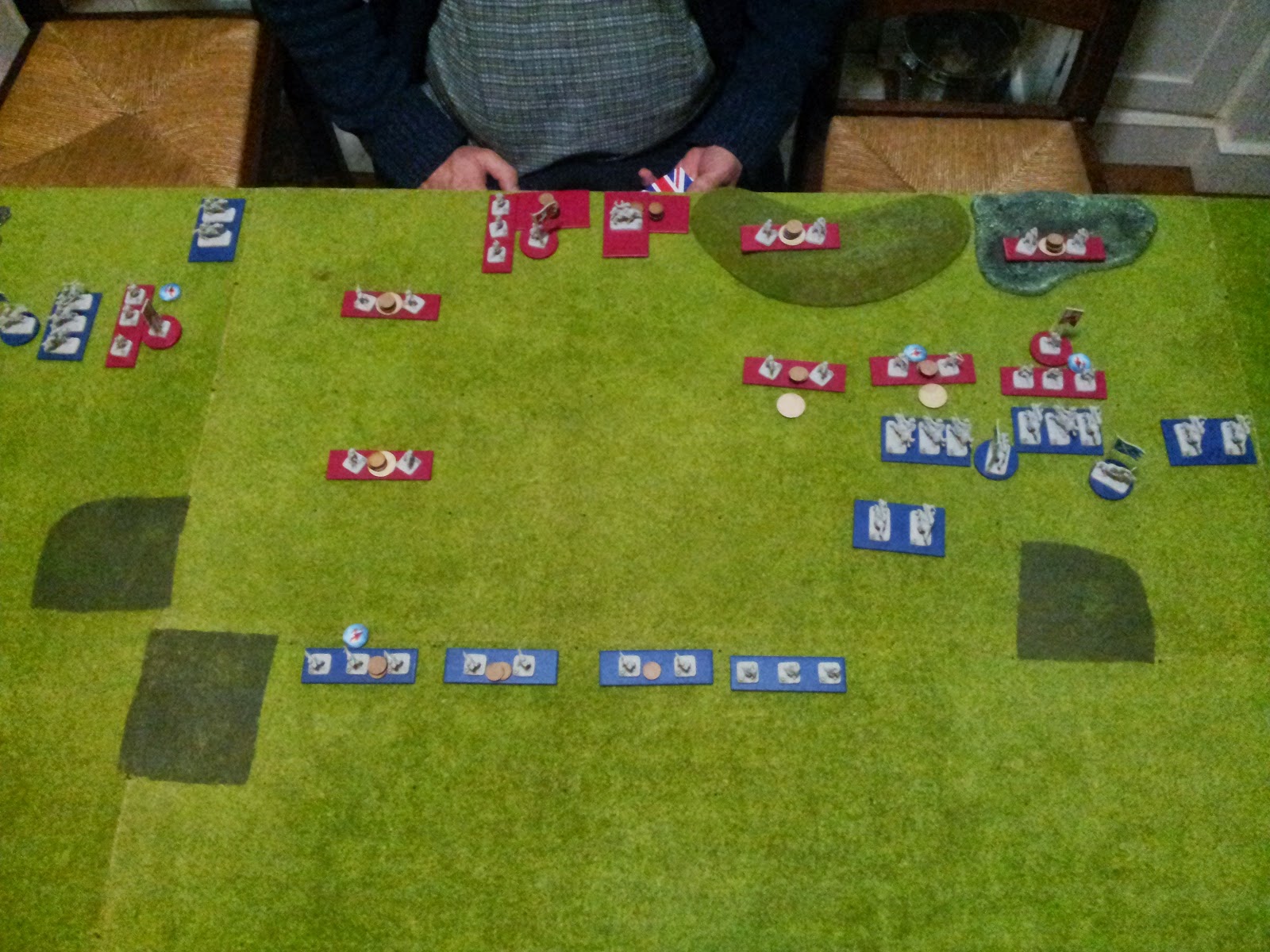 The English line fragmented as they attempted to respond to the flanking threats.  The required movement prevented several of their longbow units from shooting.  Above is the situation at the end of the French second turn. The round blue markers indicate disorder, and the larger wooden discs indicate planted stakes. The smaller round discs are ammo markers. 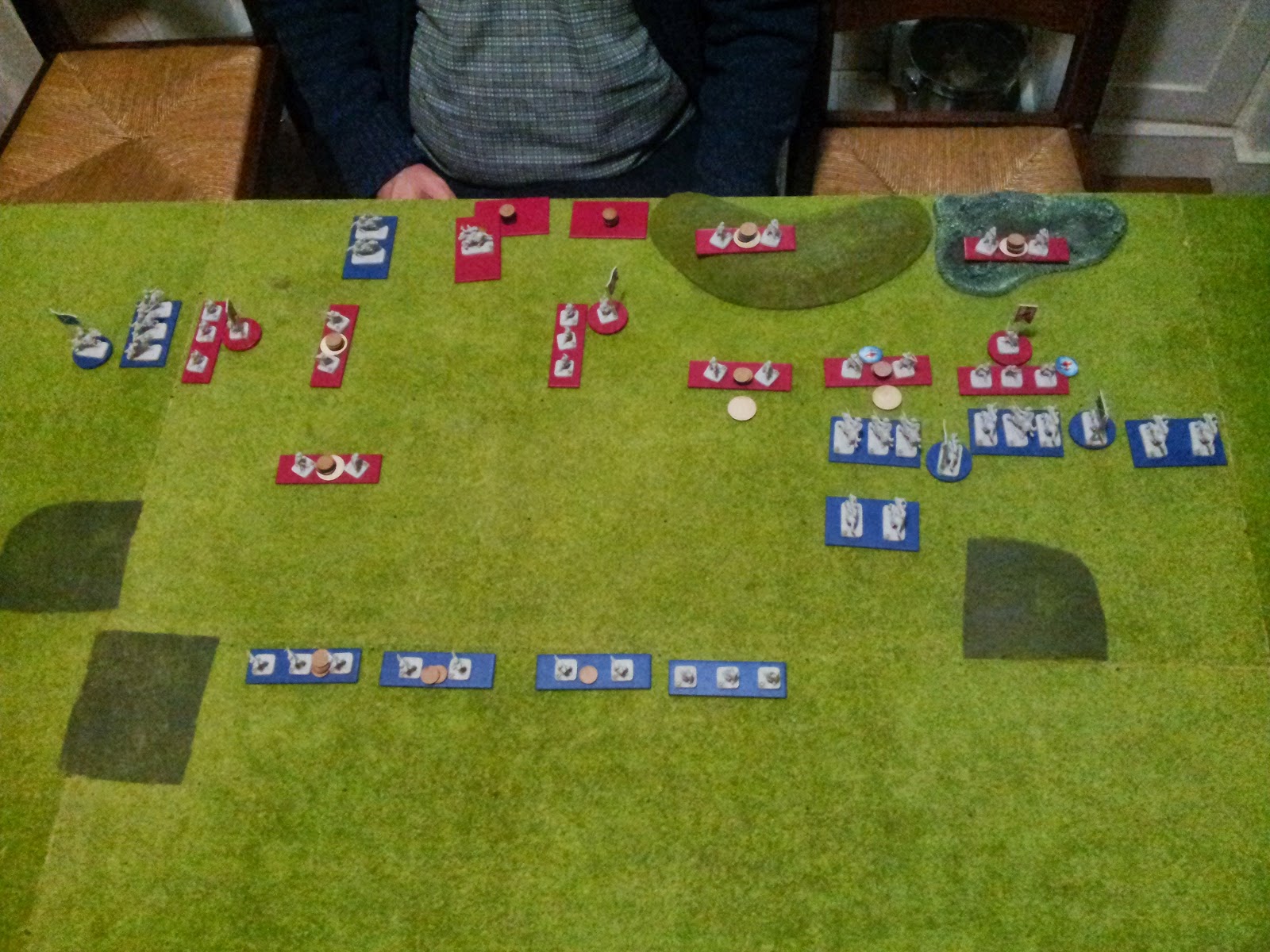 Above, the French left-hand flanking force almost cut its way through to the English camp, before retreating in the face of superior English numbers. The English left is hard-pressed by a mass of French chivalry. 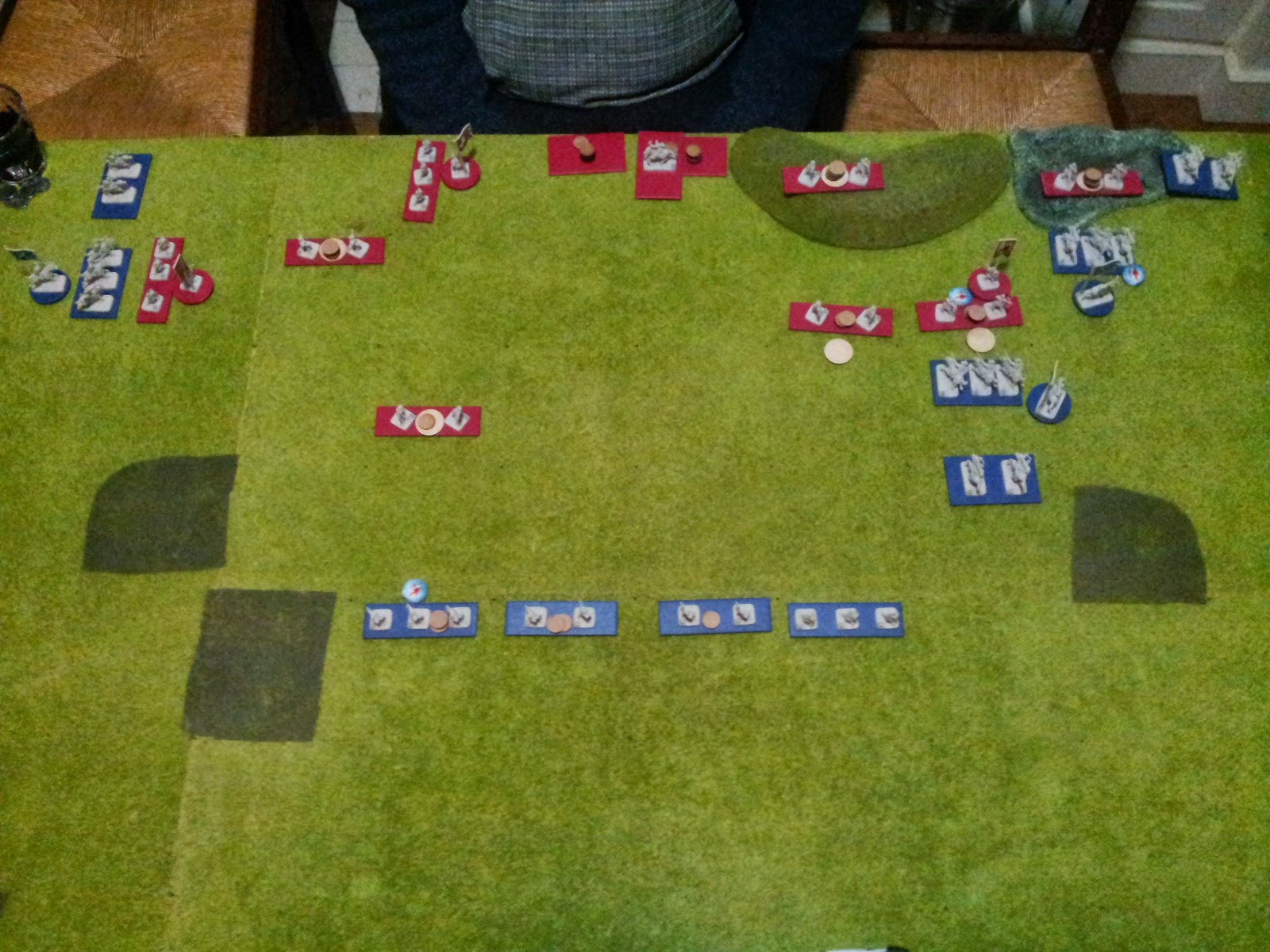 Above, the English left is crumbling under the pressure of the French knights, but the yeomen still have some arrows left and, below, destroy two units of French noble knights and seriously wound the Dauphin, who is carried from the field. The French wish they had some cavalry who could exploit the wide gap in the centre of the English line. At this point the game is very close, with the French having but three victory medals left, and the English, two. 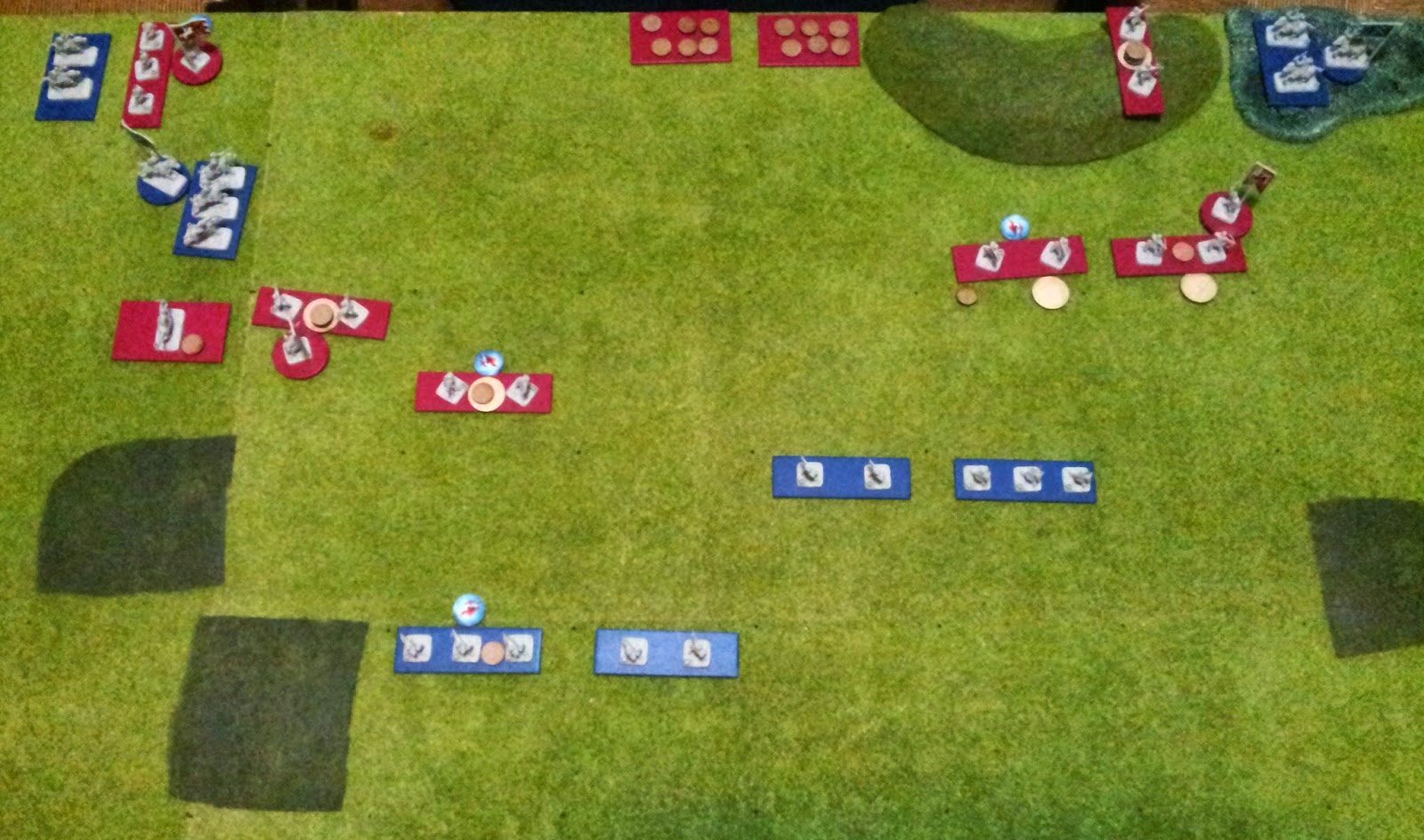 Finally the low-status French archers in the left foreground below (New fangled longbows? Pah! Zee old ways are zee best), firing off the last of their arrows, are able to kill the disordered English bowmen opposite them, and the English surrender.

The game lasted around 90 minutes, and was very different to last week's test.  The swiftness of the French charge forced the English to redeploy and consequently their archers weren't able to deliver the clouds of arrows that cost the French the last battle.  The lack of terrain was a real issue for the English as the French were able to utilise the greater mobility of their mounted knights and attack on both flanks, in a double envelopment.  The French Heroic Generals passed very many saves!  It was an enjoyable game, as was the Brunello di Montalcino we drank whilst playing it.

I'm now less that three weeks from releasing "To the Strongest" into the wild, initially as a pdf, of which more, anon.
Posted by BigRedBat at 11:45 No comments: 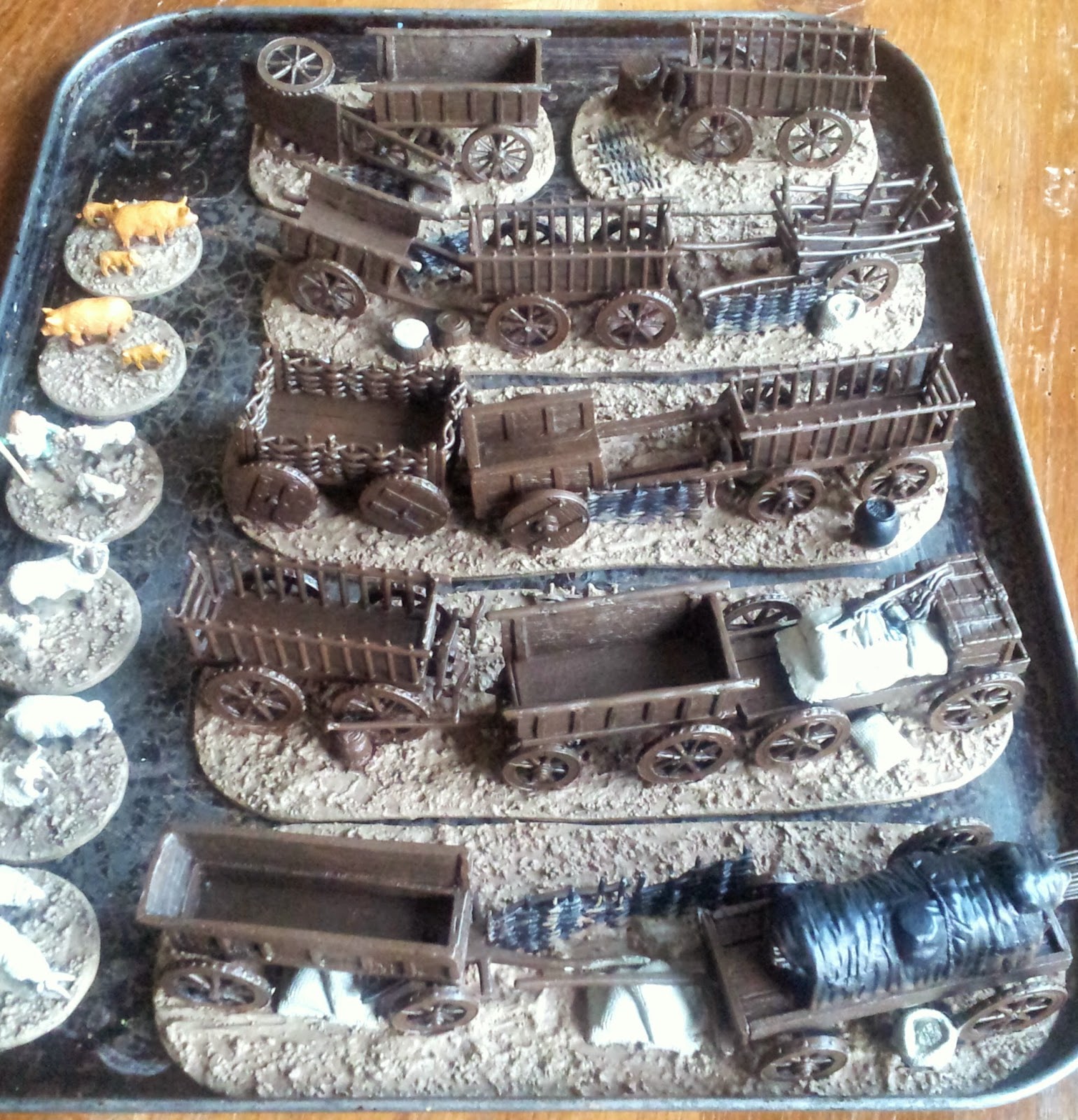 This is a continuation of my wagon laager project.  The bases are now painted and the base coats are on the wagons. These are coming on fast, now, and I hope to finish them in around a week, after which I'll have to look at basing the crew.

I'm planning to have the crews removable, so that the wagons can be used with different armies.

Some farm animals seem to have jumped the painting queue!
Posted by BigRedBat at 11:45 No comments:

Mate Ian Notter has sent me some decent photos of Caesar's expedition into Kent.  All are "clickable" for higher definition.

Here's the view down the table, at the start of the game.  SELWG gave me a slightly larger table than anticipated, and I couldn't resist sticking in a spare board and making it 16' long.  This would cause his nibs problems, later on... The game started with a Roman legion (the VII) deployed in a square around two baggage units, their carts groaning with stolen British grain, and several herds of fat (looted) cattle.  Many Britons, have turned up to contest ownership, and surround the VII on three sides.

The other legion (X) and Caesar was in the camp at the far end of the table (below). 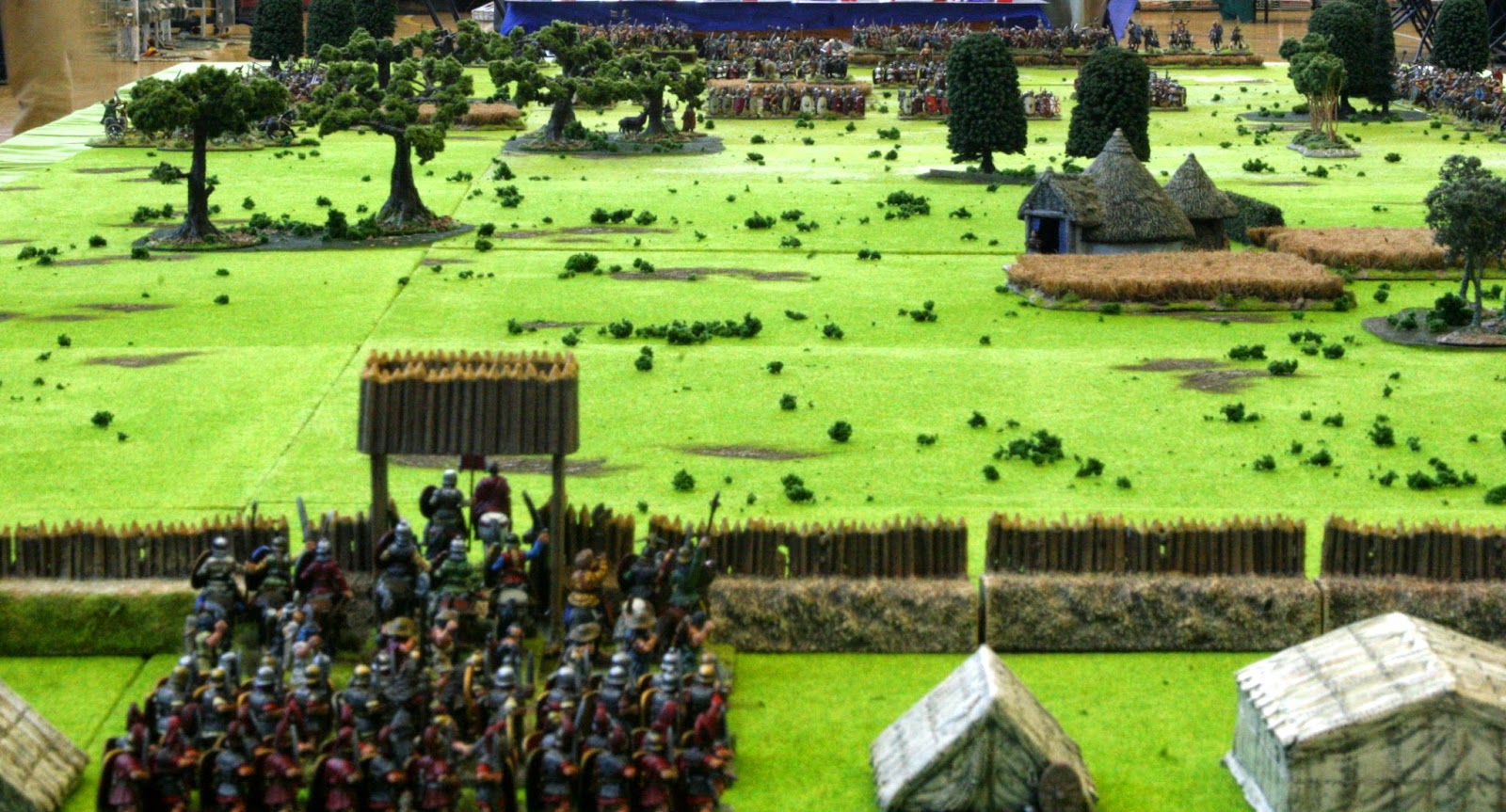 Above is another view of the beleaguered VII, several of whose cohorts started the battle surprised and disordered.  Below you can make out the Roman baggage wagons, in the centre of the square. I had intended that the cohorts at the front of the square would help them to break out, but this proved to be no easy task. 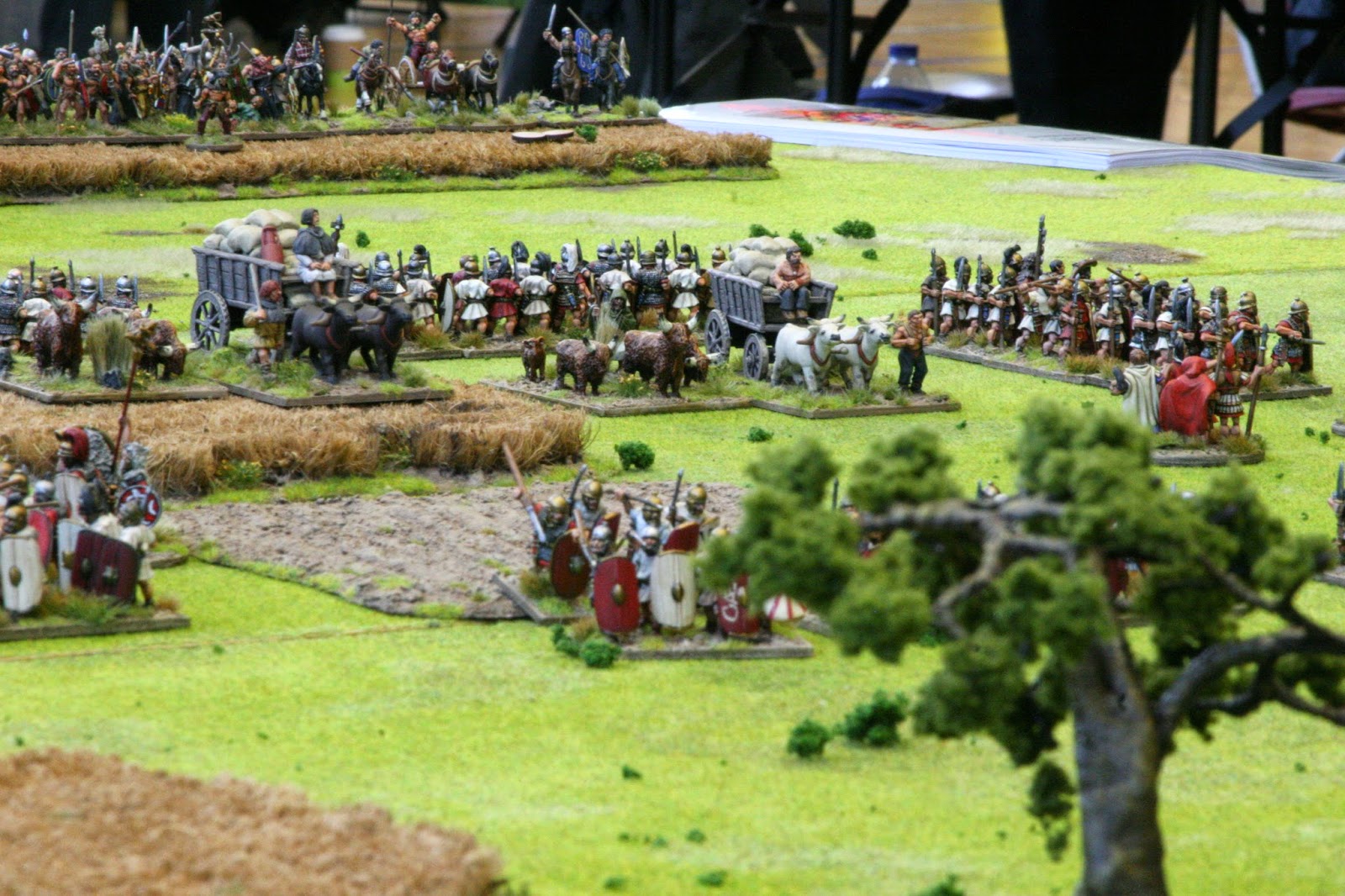 I am finally starting to get enough Britons, although a couple hundred more wouldn't go amiss. 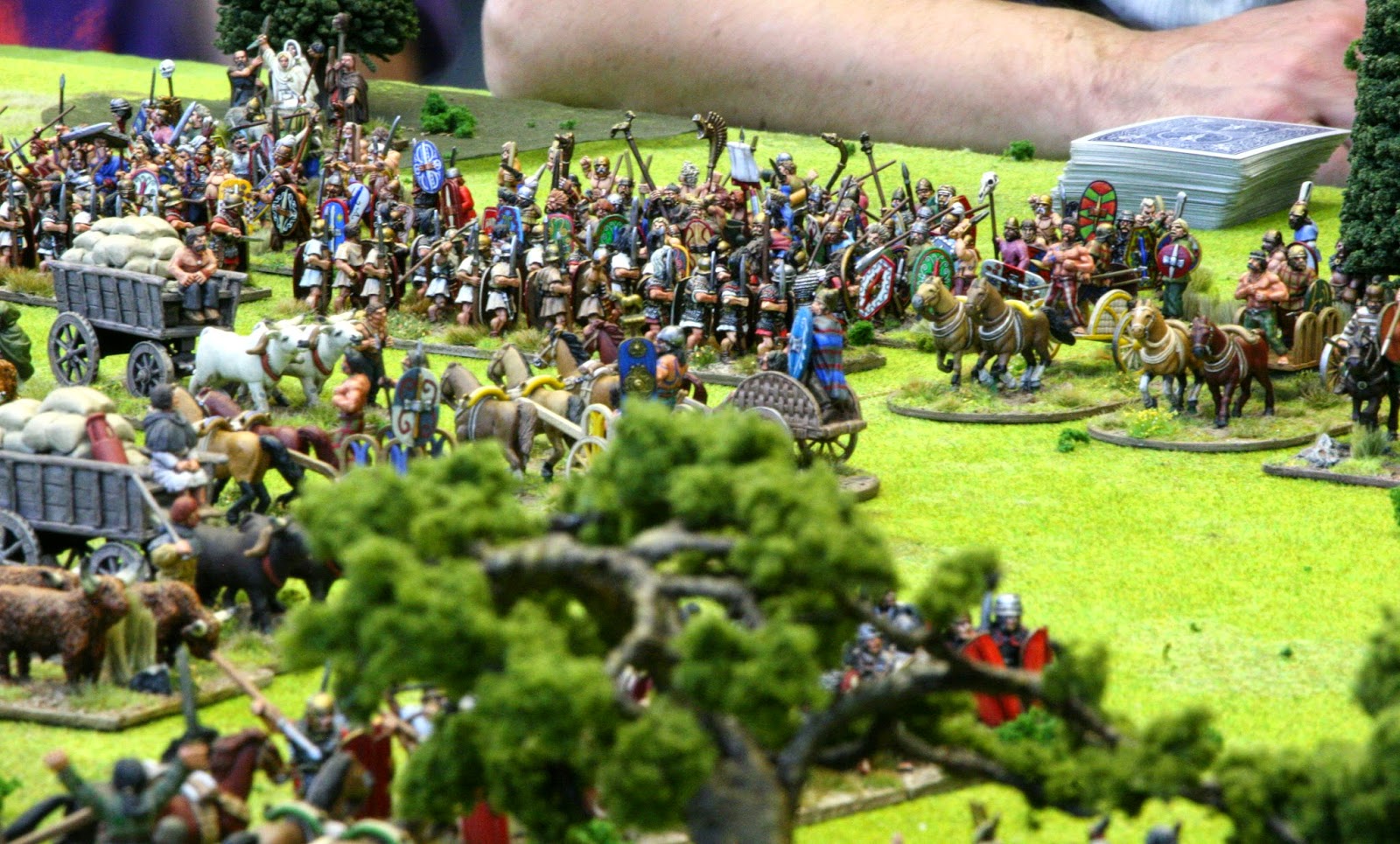 Below is a shot of Caesar's relief force, marching to the rescue, but somewhat delayed by skirmishing chariots.  In my rules the presence of the well-handled chariots prevented the legion from using march moves, and that (and the extra long table) prevented Xth from relieving its comrades.

Finally, below is my favourite shot of the game, which conveys something of the carnage and excitement of the fighting around the Roman square; a unit of Britons has just broken through. Legio VII was, eventually, over-run in both games. Card play turns out to be quite exciting! 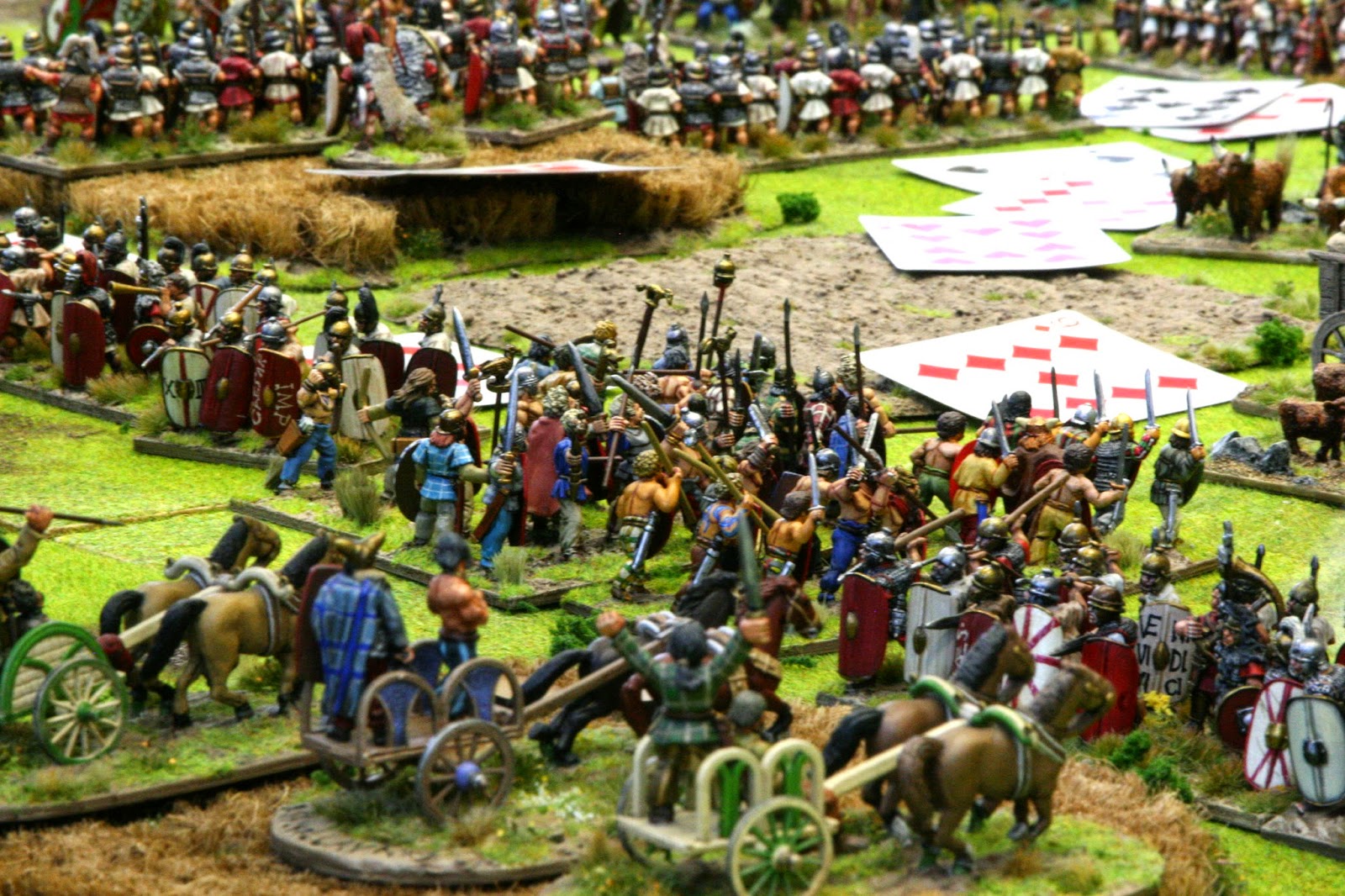 The various teenagers and parents who played both games really seemed to enjoy themselves.  It was also great to see Nick Speller (who has painted so many of the Celts) again, and mate Mark.  Thanks to Ian and George for helping to set up and knock down the game, and to Ian for his great photos!
Posted by BigRedBat at 11:32 No comments:

Yesterday I took Caeasar and mate Ian to SELWG. We had a very enjoyable day running my Kent 55 BC scenario, which twice turned into a sort of Roman Isandlwana. The game and rules (my "to he Strongest!") proved particularly popular with kids and their fathers (and one mother). I think at least a dozen teenagers enjoyed it, which is a Very Good Thing! One young Roman commander was called Kaiser, which had a certain symmetry. It was great to see mates including one very old mate, on my last show outing of 2014. The photo above is the only one I managed to take, but I should have some better ones in a few days time.
Posted by BigRedBat at 08:41 No comments:

Email ThisBlogThis!Share to TwitterShare to FacebookShare to Pinterest
Labels: SELWG

I'm bringing a big Ancients game at SELWG in Crystal on Sunday, and am keen to find a few players. 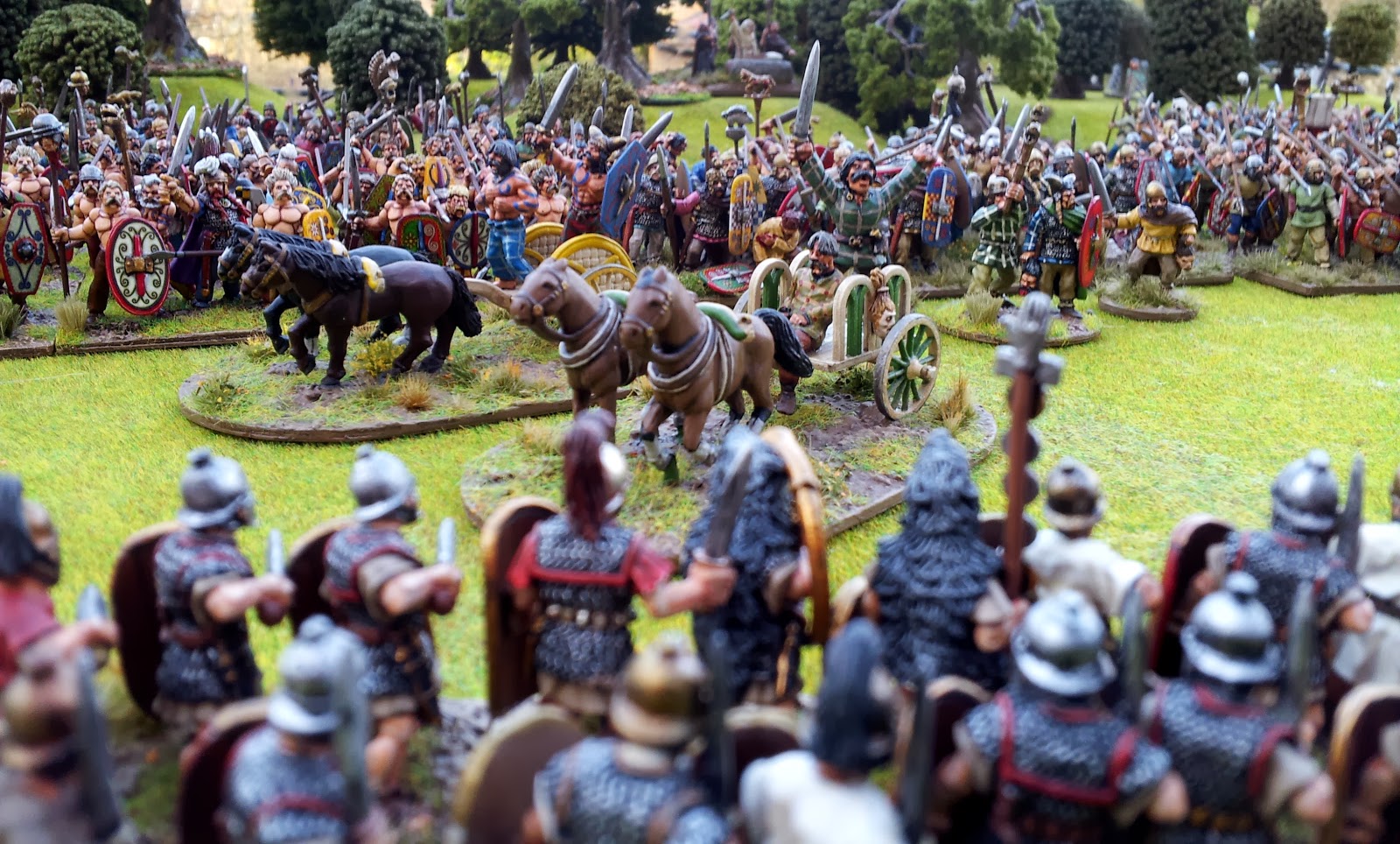 It's the follow up game to my C-Day game at Salute, and features a British counter attack against Caesar's Legions led by chariots and my new band of fanatical British warriors.  We'll be using my "To the Strongest!" rules, which will be published (initially as a PDF) next month, so it's the last chance to try before you buy.  I'll run it once in the morning at 11:00, and a second time in the afternoon at 1:30.

If you are about, please drop me a line at the address above to the right, and I'll book you in! 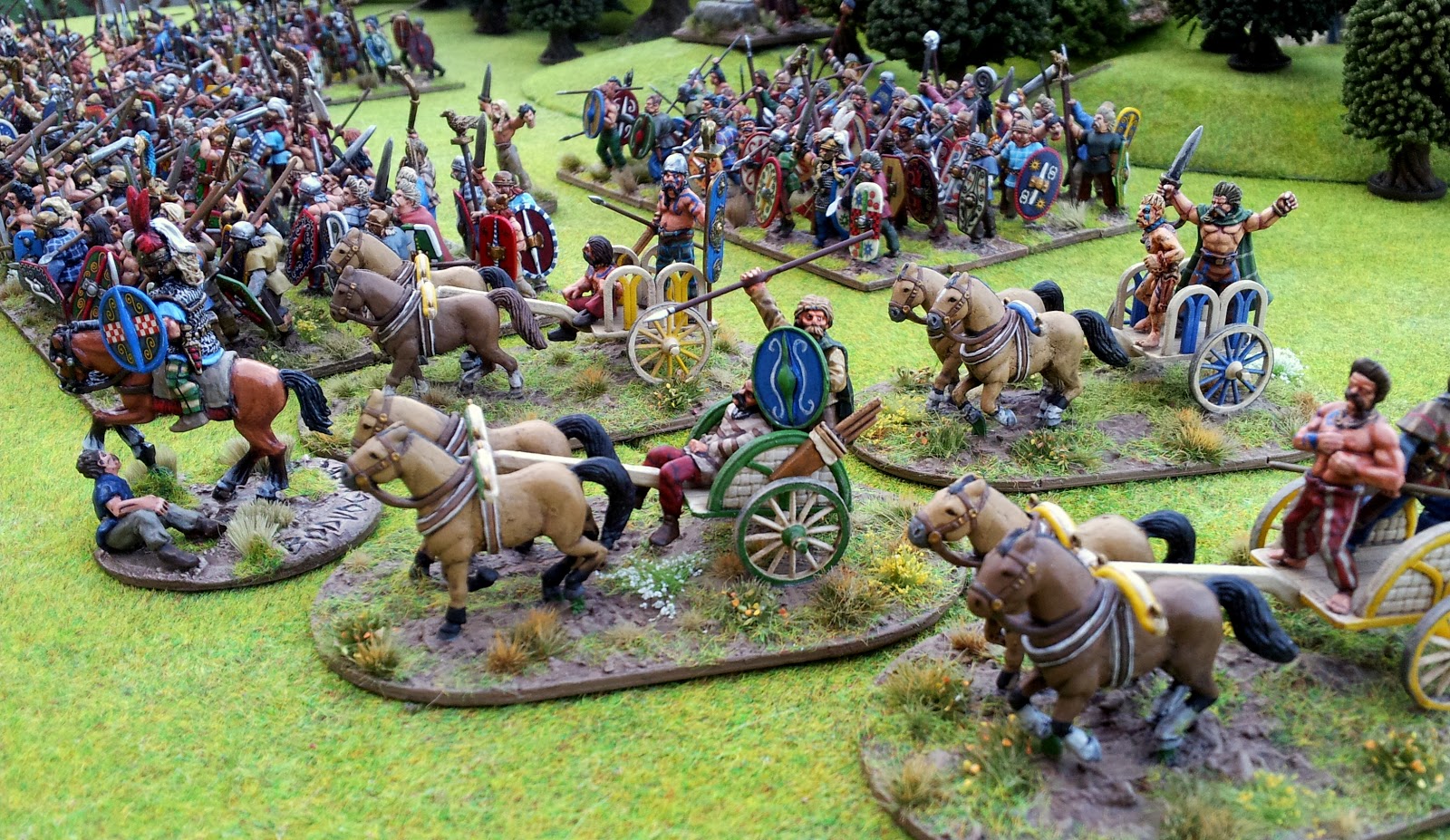 Posted by BigRedBat at 13:26 No comments:

Email ThisBlogThis!Share to TwitterShare to FacebookShare to Pinterest
Labels: SELWG 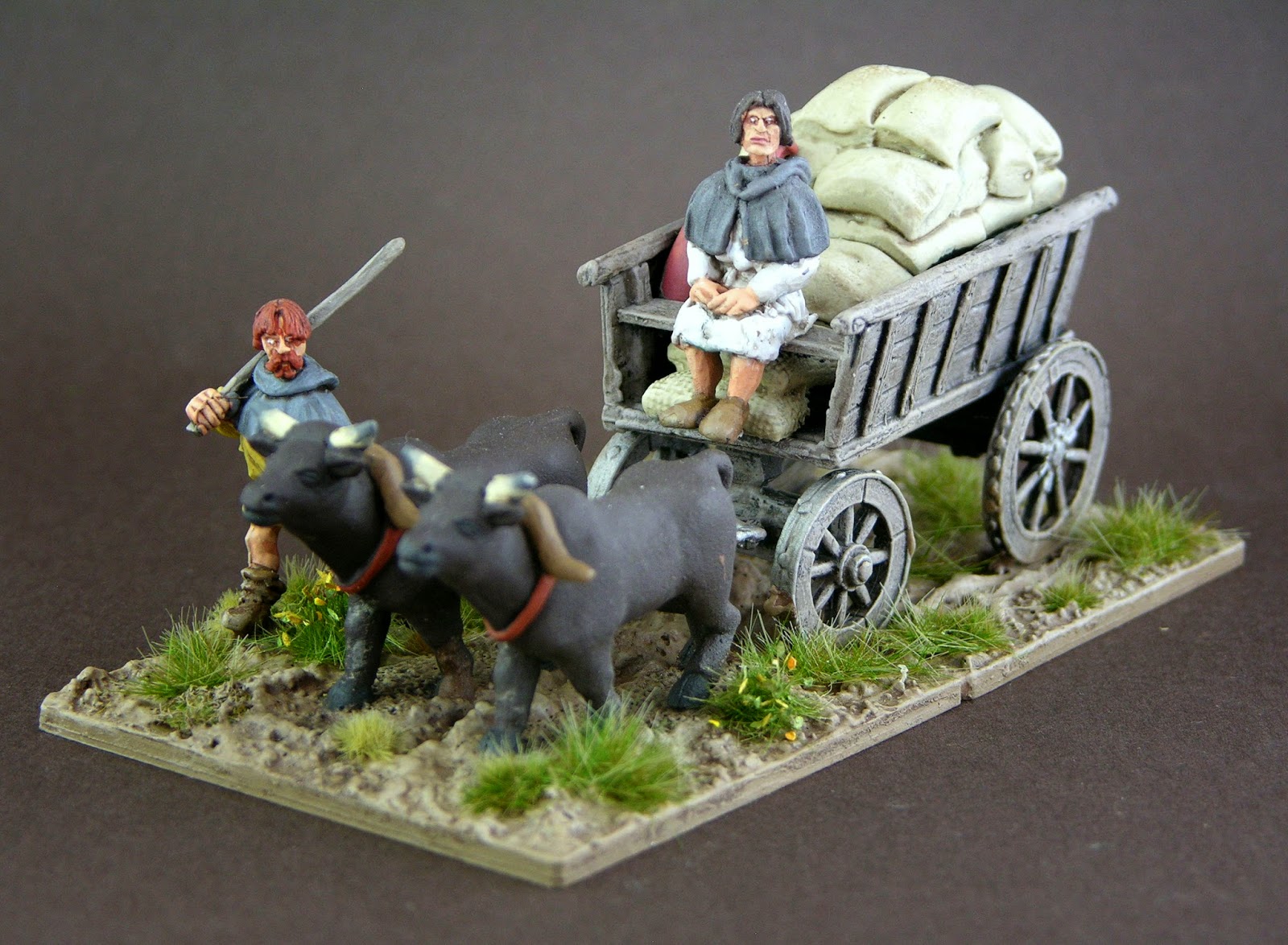 Here are two wagons that fill a gap in my arsenal.   Both are from Irregular Miniatures, with Front Rank oxen and resin loads from Colonel Bill's.  The top wagon has converted Front Rank crew, and the bottom wagon Foundry/Black Tree.  They will serve in the baggage trains of my various Roman armies, along with some more wagons I intend to build later on, and will see action on Sunday at SELWG.  Irregular are a great source of cheap components, and the Front Rank oxen are great models! 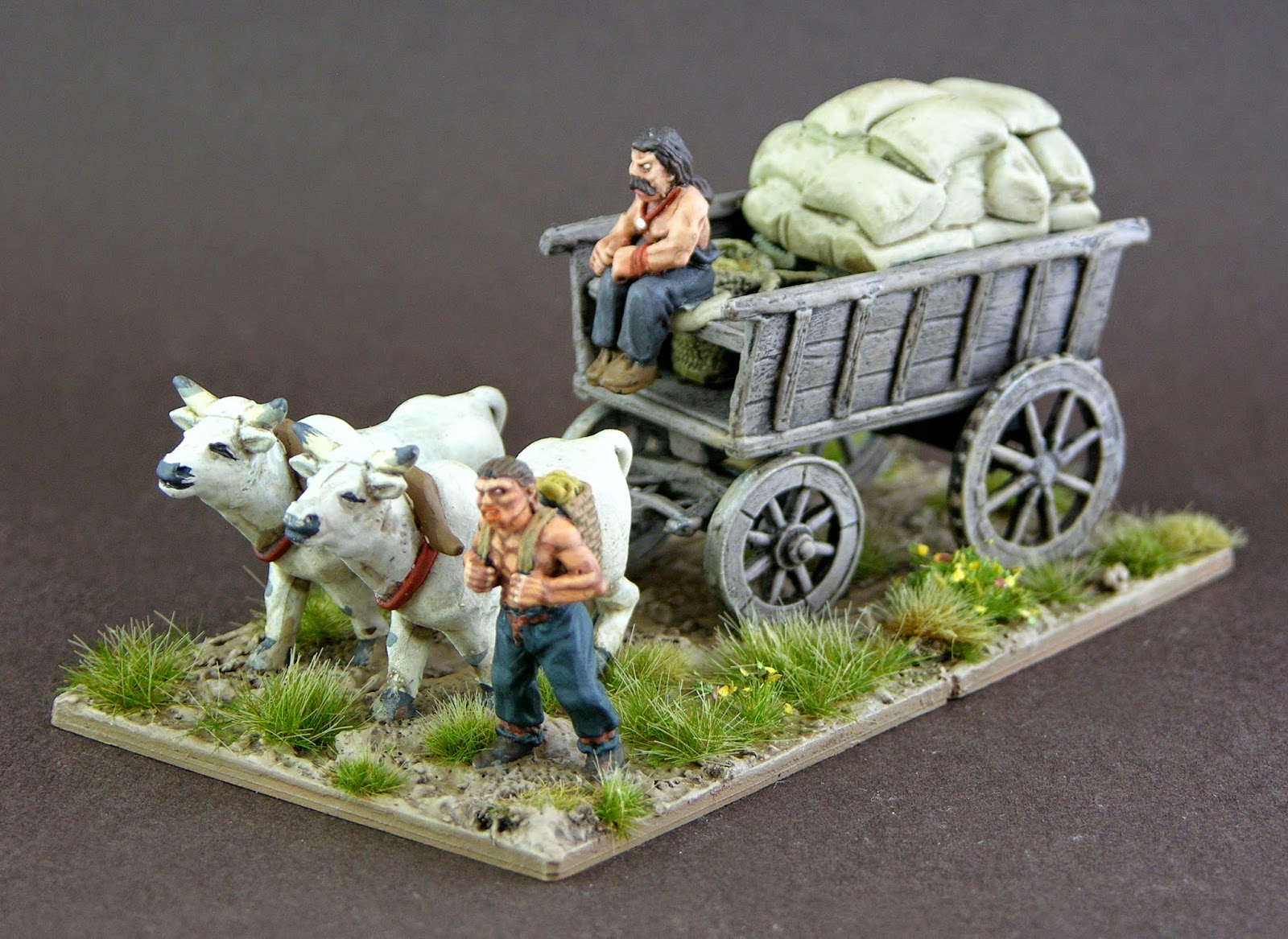 Posted by BigRedBat at 13:10 No comments:

Email ThisBlogThis!Share to TwitterShare to FacebookShare to Pinterest
Labels: Irregular

"On the beach stood the adverse array, a serried mass of arms and men, with women flitting between the ranks. In the style of Furies, in robes of deathly black and with dishevelled hair, they brandished their torches; while a circle of Druids, lifting their hands to heaven and showering imprecations, struck the troops with such an awe at the extraordinary spectacle that, as though their limbs were paralysed, they exposed their bodies to wounds without an attempt at movement."  Tacitus Annals, Book XIV, 30 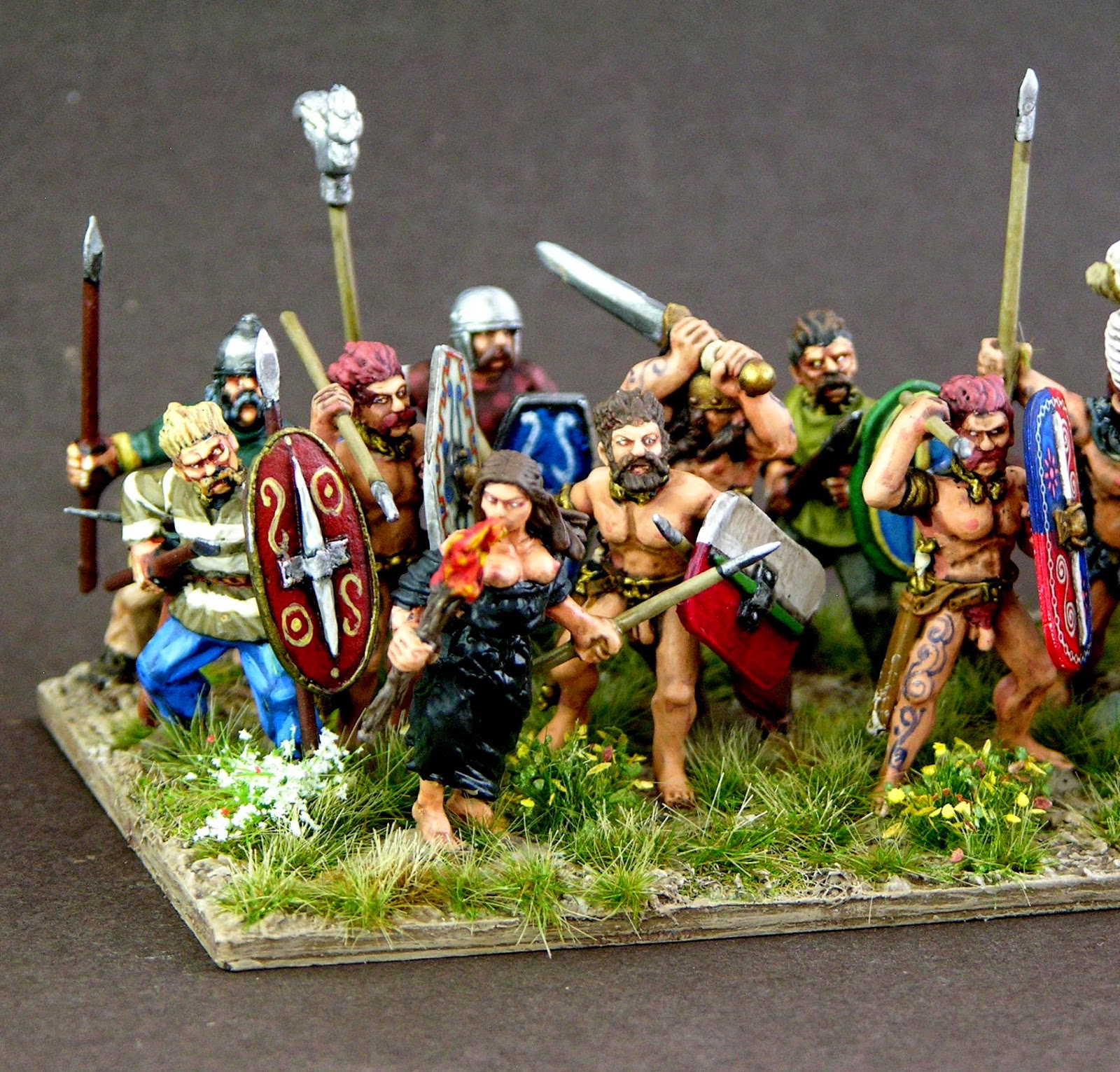 I've just finished basing a unit of Celtic fanatics, based on Tacitus' above description describing the Druid-led forces at Anglesey, preparing to receive the Roman landing (and golly that is a scenario I will need to tackle, one day!).  Pics are clickable.

These are a mixture of Renegade and Black Tree Designs Celts, led by two Druids who are fantasy figures, a Foundry German priestess, and a converted Foundry nymph. I painted most of the figures, and Nick Speller the remainder. Despite earlier misgivings, I am really delighted with the way the unit has turned out, and want to paint a second one at some stage. 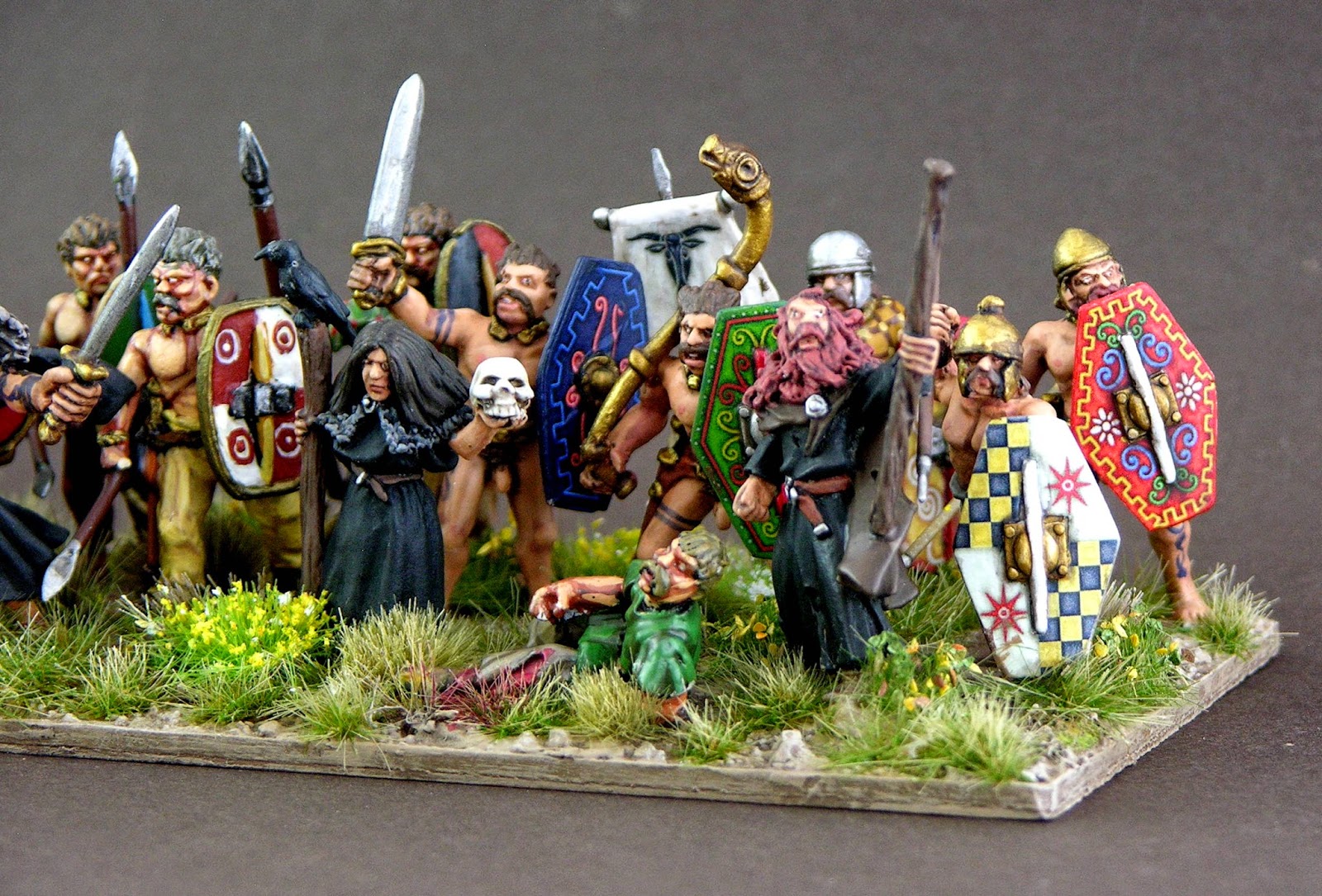 In my "To the Strongest!" rules (to be published in November, initially as a pdf), fanatics fight in much the same manner any other unit of warriors. Their fanaticism, however, enables them to ignore the effects of disorder, and they consequently fight with full effectiveness until they drop!

I am gradually basing/re-basing the front rank of all my Celtic warrior bands as 18cm frontage single elements. They look better this way, and are quicker to deploy and move around the wargames table. 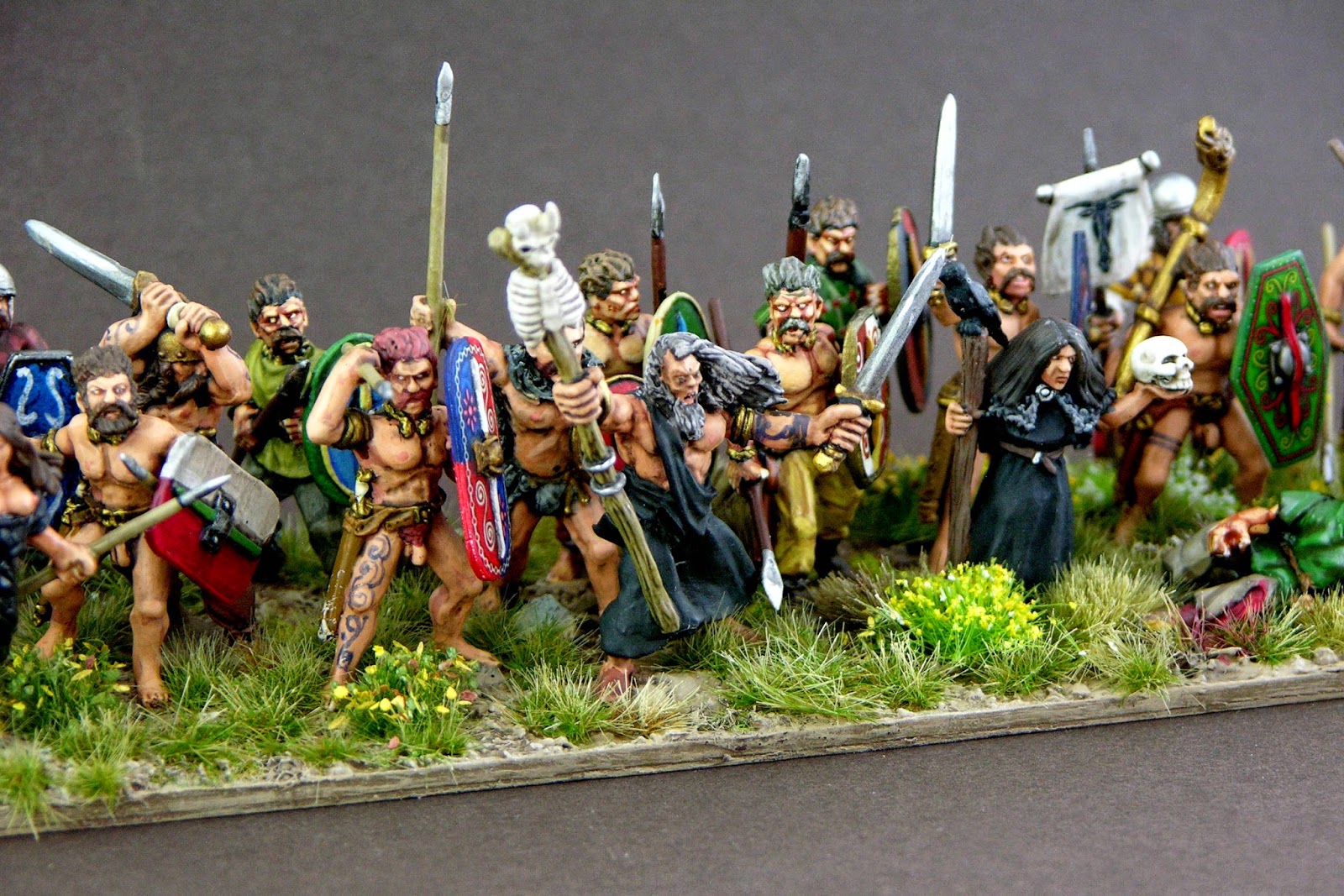 These new recruits to my Celtic army, along with Caesar and some invading Romans, will be at SELWG on Sunday- please drop by and say hello if you are there!
Posted by BigRedBat at 12:49 No comments:

Still not feeling it for the Celts...

WIP shot of my celtic fanatics, now almost ready for base gunking.

Who will be first to spot the elf?
Posted by BigRedBat at 13:31 No comments: