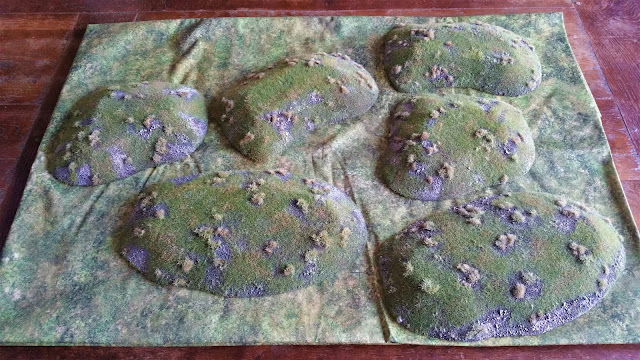 I'm now in the final stages of preparation for the Wargames Holiday Centre gaming weekend in Basingstoke. Here are some old GW hills that I've re-purposed to match the "sagebrush" gaming mat for my Ruspina game (the one with all the Numidians). These are great products- sadly OOP but often encountered on eBay- sturdy, light and stackable. I've added scree, repainted, flocked, tufted and dry-brushed.

I an told by Deep-Cut that the mat that we will be using for the biggest game (not shown), Ipsus, is the largest mat that they have ever manufactured. So I probably have the largest production battle mat in the world.  :)  Muwhaha...
Posted by BigRedBat at 11:40 No comments: 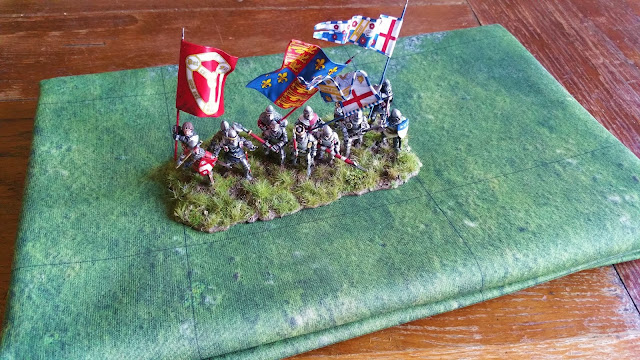 I got some more mats designed by Deep-Cut with a 12cm grid (shown here with a 13cm-wide element on top; plains design above, sagebrush steppe design, below). I'm not exactly sure what I'm going to use them for, but they are a good size being 15 boxes wide by 10 deep. 10cm-wide units would look great on them- I know chum Ian has some of those for "Maurice." I've put a few in the Shop. 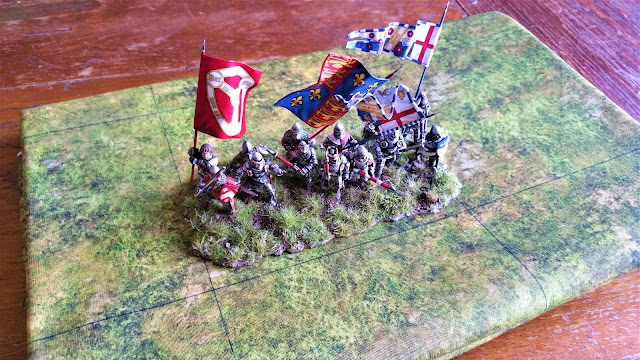 Posted by BigRedBat at 12:26 No comments:

Andrew Brentnall has been extending his ECW collection with some casualty bases- here are some of them, there are many more. We hope to make the battlefield a little less "parade-ground" than usual. Many will make it onto the table for his Edgehill game at the Wargames Holiday Centre, Friday week! 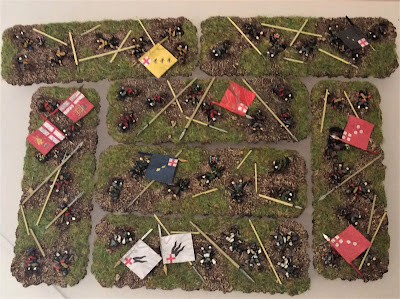 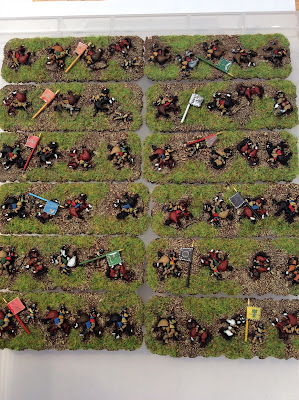 Posted by BigRedBat at 11:41 No comments:

Last week's Successors are all completely based; photos to follow. Above are the second and final plase of the Flockathon. This is (most of) my Numidian army, which has roughly doubles in size and been completely re-based onto 20cm BatBases. I hope to have them flocked and tufted by the weekend.
Posted by BigRedBat at 12:18 No comments:

Email ThisBlogThis!Share to TwitterShare to FacebookShare to Pinterest
Labels: Numidians 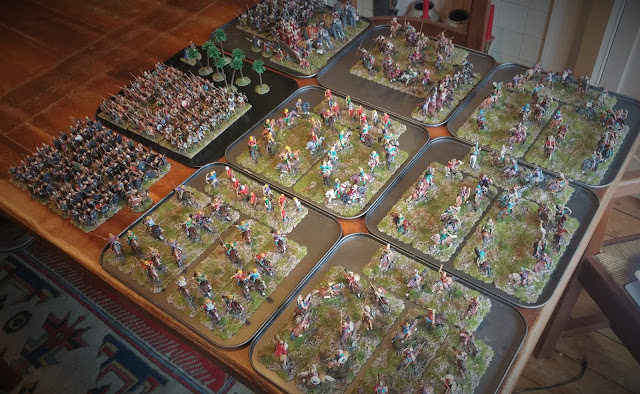 The first batch of minis are flocked and just need some more tufts, weed, flowers and a little dry brushing. I'm really chuffed with all the new Eastern light cavalry- I can start thinking about Magnesia and Carrhae, now, and one day perhaps even Guagamela.  :-)

I'm going to tuft tonight, drybrush tomorrow and aim to get onto the Numidians on Monday.
Posted by BigRedBat at 16:00 No comments:

With less than three weeks to go to my big Wargames Holiday Centre gig, I find myself with 700-odd minis to flock- the above are around one third of the total. I'm saving the joy of the Numidians for next week. The above include Parthians, Persians, Thracians, Carthaginians, Greeks, Goths, Successors and Spanish. Almost all are on my special 20cm irregular edged bases and half-sized bases.

For me, flocking is a multi-stage process:-

Alongside the TtS Worlds at the recent Chalgrove event, Andrew Brentnall ran a participation game of the Battle of Edgehill using his superb collection of 12mm ECW minis and the "For King and Parliament!"rules that we have been writing and developing together. Here are some photos of the game in progress!

The outcome of the battle was a decisive victory for the King - which might have ended the war in 1642.

The fKaP rules are coming on well, with all the key rule mechanisms in place and over 11,000 words written. We've spent the last six months in development and play-testing, with help from numerous chums. We are coming towards the end of that stage, now. I plan to pile on with writing the remaining text during the spring and early summer.
Posted by BigRedBat at 19:34 No comments:

Email ThisBlogThis!Share to TwitterShare to FacebookShare to Pinterest
Labels: ECW, Edgehill, for King and Parliament

Chums at Aventine have produced some new resin elephants (metal tusk and tail) which I received samples of, yesterday. These are Keith's pics but they are identical to the models here in the BigRedBatCave. 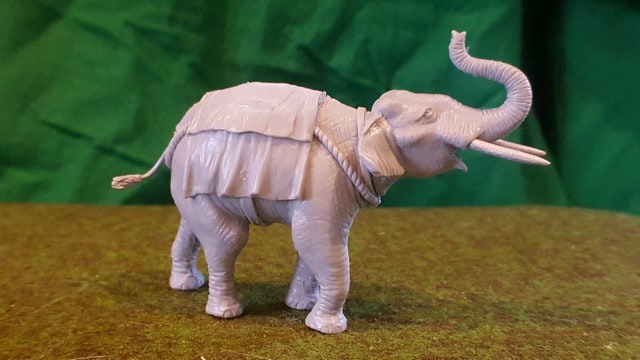 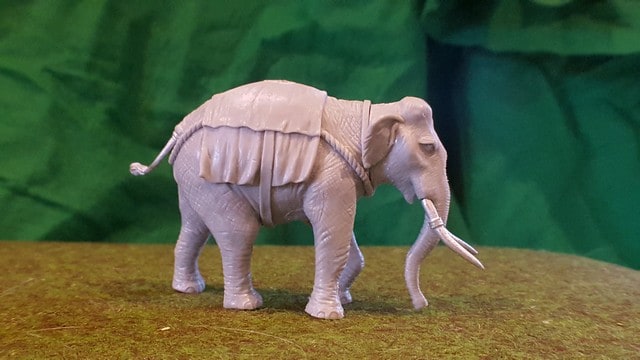 The new elephants are the same size as the previous metal ones, but superior in several respects:-


I gather the separate metal howdahs should be available in the next few days and a Macedonian rider with pike is to follow. I will encourage an Indian variant.

I must confess to a personal involvement in this as I  introduced the casting company to Aventine, so I am feeling more than a little smug. :-)
Posted by BigRedBat at 18:21 No comments:

The "To the Strongest!" Worlds!

On Saturday we fought the third annual "To the Strongest!" World Championship in Chalgrove, Oxfordshire, hosted by the South Oxfordshire Generals.

This year we had 29 players (up 12 from, I think, 17 last year). I'm afraid I didn't take a great many photos, but Ian Notter took some (thanks Ian) and I have combined them, with mine, below. I apologise in advance for all errors in description of the armies and if I have no photos of your army! 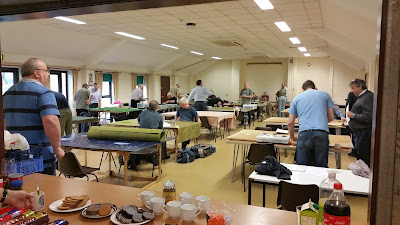 Above a shot of the players setting up, from the relative safety of the kitchen. Below Tim Thompson and Philip Marshal in their first game- Tim was using Later East Romans and Philip, foreground, their EIR ancestors. 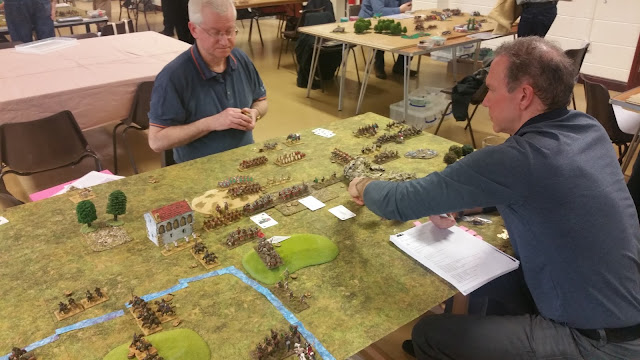 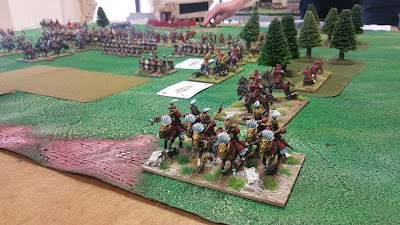 Above and below are Roger Calderbank's Sung Chinese- an unusual and colourful army with a great camp- from the Oriental booklet. The firelance cavalry in the foreground above have explosive lances! 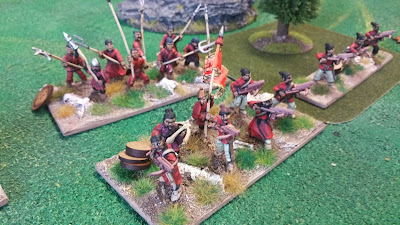 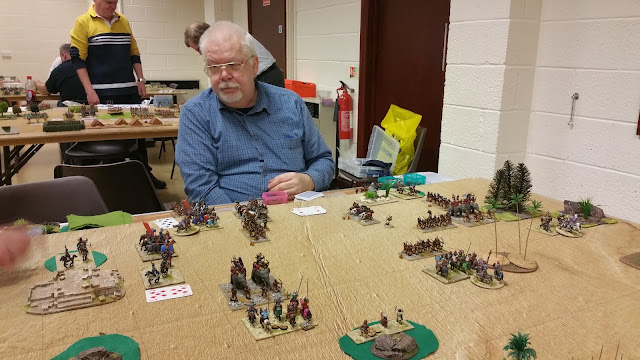 Above, Indian Emperor Baz cogitates, as well he might for he faces the Shahenshah Simon Purchon's fearsome Sassanid Persians. I believe Barry is now doing sterling service in a new role as a mounting block. ;-) 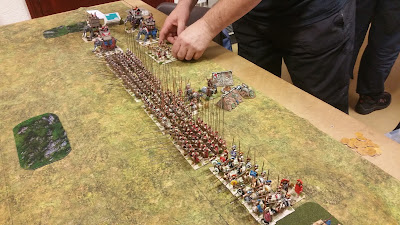 This beautiful army (above and below) belonged, I believe to Chris Winter- lovely Vendel Pyrrhics. (Correction- Chris Winter brought a different Vendel Macedonian Army; I think this army belonged to Kevin Lucas). Due to a misunderstanding about the rampage rules (backwards, not forwards!), the army included no fewer than four elephants and two scythed chariots! As well as looking good, I believe the army did very well. 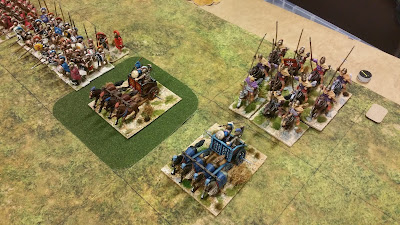 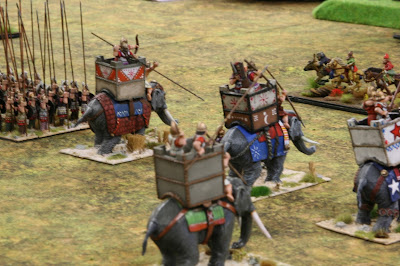 Below, I need to send some shock markers to Ross Broadstock.  ;-)  Ross has a YouTube account of a TtS! battle which is great to watch. 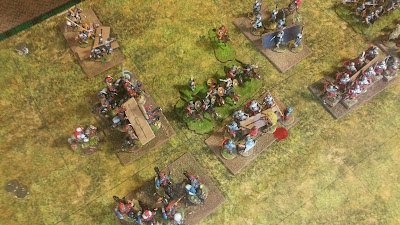 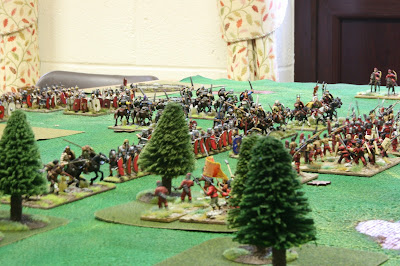 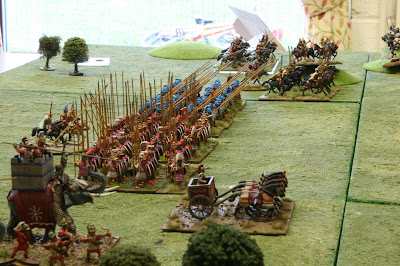 Above the Pyrrhics (correction; Imperial Seleucids) again and below veteran Late Romans (Tim's, I think). 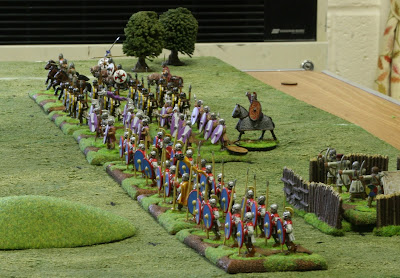 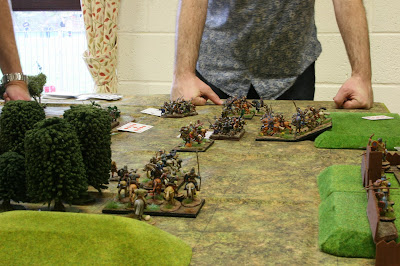 Above that's my belly; I think the army on the right are Alex Meyer's Nikephorians. Ales and his mate Jan came all the way from Belgium! Below the handsome Victrix Polybians belong, I think, to Andy Green. From memory they are fighting Mike Guest's Ayyubids. 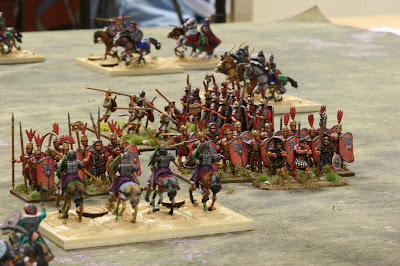 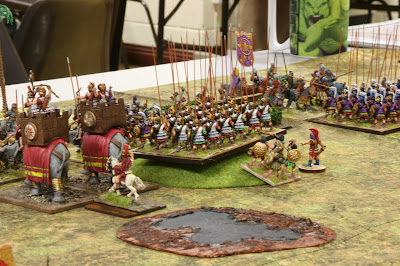 Above this was another stunning pike army, possibly Nick Abbott's Seleucids? Below, not sure. Many of the games were played on Deep-Cut mats that I sell- this design is Sagebrush Steppe, the most versatile design I reckon. Rather greener than the official photos suggest. Below Tim's Romans, I think? 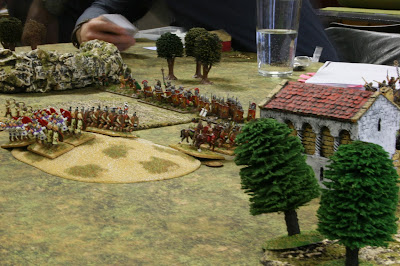 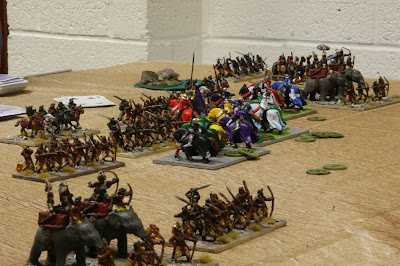 Above, foreground, are Emperor Baz' Indians, fighting Bevan Marchand's Medieval Germans. Below another shot of the Imperial Seleucids. 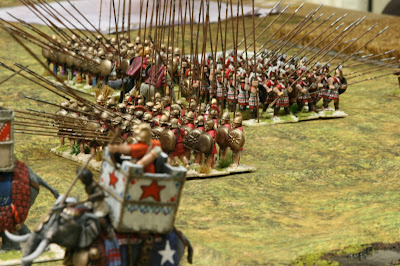 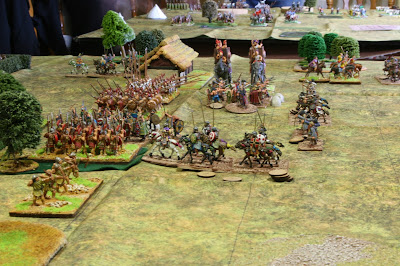 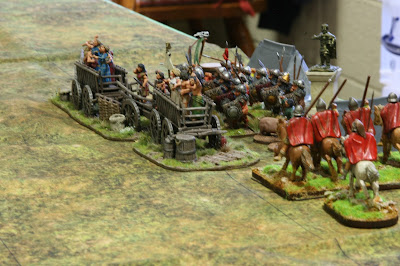 I  recognise the laager above 'cos I lent it to Nick Speller's Huns. This flank attack on the Hun camp looks ominous.

I have quite a few photos of the excellent Edgehill battle that Andrew Brentnall laid on but I shall save those until tomorrow!

Results are never the most important element of a To the Strongest! event, but Simon Purchon's Sassanids won (again!!!) and I recall that Peter Ryding's Mongols were in the top three- shoot-y cavalry armies, in experienced hands, seem to do very well- they seem to be able to win decisively and score highly. Someone can perhaps remind me who the other placed player was? (Update- Chris Winter came second- doing very well in his first TtS! outing.) I think Bob Ullman won the prize for the least-high score- traditionally the best prize.

Lastly here's the group photo. As far as I could see everyone had a great time; the atmosphere was very convivial. A huge thank you to everyone who came (especially the Belgians and Welsh who had such long journeys) and of course to the South Oxfordshire Generals for hosting, especially Steve Dover for organising and scoring and the volunteers who ran the kitchen. Also thanks to Warlord Games who very generously donated prizes and to Trevor Holcroft who donated the first price. On to the 2018 Worlds; I think we may need a bigger venue!
Posted by BigRedBat at 20:05 No comments: