One more Burgundian unit, for the time being, again painted by Lionel Bechara, flocked by Ian and tufted by me. I intend to add at least two more units of these, including some nice old Grenadier minis that will add a bit of extra variety; perhaps also some Perry officers and a standard with an arquebus. this unit is based on slightly shallower FK&P13c bases. I have more-or-less enough Burgundian foot, for the moment, and I've started to think about mounted knights, coustilliers and pages (gulp; potentially quite a lot of work in them!). 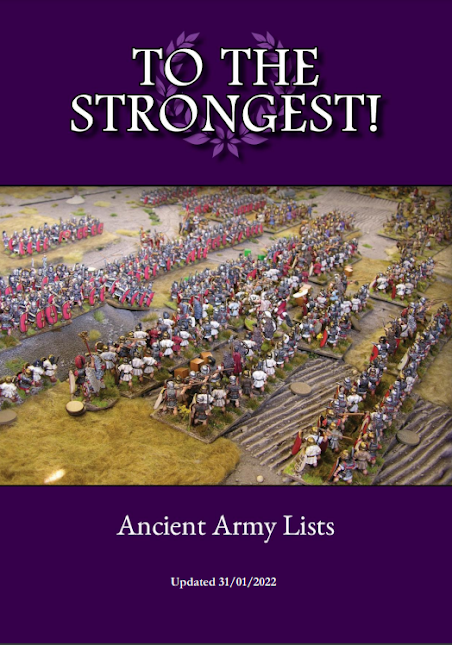 Today I've just released an updated version of the TtS! Ancient Army list eBook, with four new lists (Cappadocians, Hasmonean Judean, West African Forest Kingdoms and Mossi). Now with 164 army lists, the book is now approaching completion and consequently the new armies I am adding tend to be somewhat more obscure, although often all the more interesting for that. I'm still adding background material to the lists  - I'm up to 128,000 words (!) - and revising some of the older lists. If you've previously bought a paid-for version of this list (as opposed to the original free version of the book) you should have recently received an email copy (from the BigRedBatShop) or a download link (from Wargames Vault). If not, please mail me. At the end of February there will be a similar update to the Medieval army lists.

Posted by BigRedBat at 12:16 No comments:

By way of a slight digression from the 1670s, here are some minis I finished late last year but never got around to photographing. I decided to expand my two x two stand units of Burgundian longbowmen each to three stands, and added stakes. Most of the miniatures were painted my my French chum Lionel Bechara, I did some highlighting. They are, of course, Perry plastics, even the flags are Perry. Chum Ian flocked and I tufted. I now have around eight Burgundian units, I need at least twice that. Chum David sent me some recently, which will certainly help. But even 16 units would barely speedbump my Swiss!

In other news... I've managed to get the BigRedBatShop restocked. I have pretty much everything in stock, aside from the Deep-Cut cross-grid mats which I can't get printed at the moment for technical reasons- but I have bought in some from Geek Villain. I have all of the coloured chits, plain MDF chits and bases back in stock. If there's anything that you want that appears to be out of stock (other than cross-grid mats), mail me, I probably have it somewhere in my lounge.

I'm currently finalising the latest version of the Ancient Army List eBook- that should go out on Monday, it includes four new lists and some other new material. If you've previously bought it I'll send you a copy or a download link.  It now has 164 lists in it- pretty much any ancient army that you'd ever want to put on a table.

Finally I hope to be at Partizan on 22nd May- I'll be taking Roundway Down in 28mm. I still have a few slots for players- email me if you'd like me to book you in.

Posted by BigRedBat at 14:25 No comments: 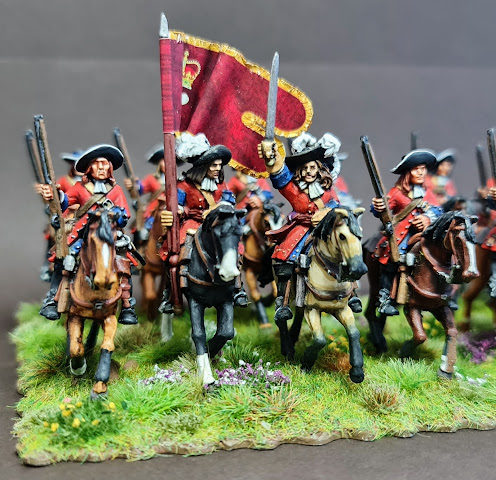 Here is the first detachment of my Royal Dragoons ca.1685, which I originally intended to use for Sedgemoor. Now I find myself wondering whether I might be able to use them as the English 1st Dragoons in French Service in the 1670s, but haven't as yet discovered any uniform/flag details, they may not exist. Red seems possible, although they might have been in grey like the English foot in French service. I could potentially swap out the nice Flags of War guidons and use them later with my (projected) Front Rank 1685 dragoon unit.
I bought some of these 1672 minis, painted, a few years back, and chum Steve Spence painted a bunch more. Shaun McT is painting even more for me, and the foot versions, too. Ian kindly flocked the bases, I tufted and matt varnished. It's a big, deep unit- I found it challenging to photograph.
I really hate dragoons as one has to paint them mounted, dismounted and the standing horses as well- three times the work!

In other news, I'm planning to run a big Roundway Down game at Partizan near Newark-on-Trent on May 22nd. I'm scouting around for players- I need three or four players each for the AM and PM sessions (around 90 mins each), so if you are going and interested, please drop me an email (above left) and I will book you in.  I am also desperately keen to find someone local to help me set up the day before - 4pm-ish for around an hour or 90 mins - I need help setting up a huge hill. If you are relatively local and free please mail me, there might even be beer or a curry in it, after. :-)
Posted by BigRedBat at 13:05 2 comments:

Email ThisBlogThis!Share to TwitterShare to FacebookShare to Pinterest
Labels: 1672, Sedgemoor 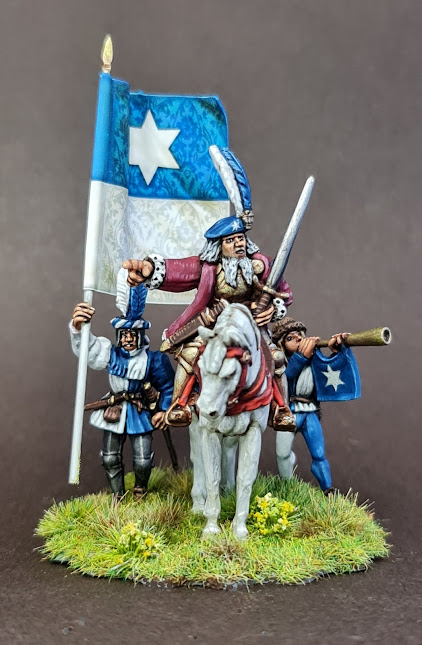 Adrian von Bubenberg was a Bernese knight, general and politician. He is chiefly famous from the battle of Murten, where his valiant defence of the town bought time for the Swiss army to assemble. This then went on to crush the Burgundians. Von Bubenberg sallied forth to join the ensuing massacre.

The models were beautifully painted by chum Andrés Amián Fernández, and are respectively Perry, Wargames Foundry and Grenadier miniatures. The flag is from Iain at Flags of War. Von Bubenberg probably didn't have a beard, but I love that model! You can't see it clearly in the photo, but he has blingy gold-plated armour.

He'll be one of the commanders for my Swiss army, which has been in storage for around a year but which I hope to get back onto, shortly, when I return from my holiday in 1672.

Today I'm working on the latest version of the TtS! Ancient Army List eBook, which I will publish on or about 31/1/22 (I'll send everyone who has bought it an updated version). I hope to include four new lists and a fair amount of extra background material on several of the existing lists. 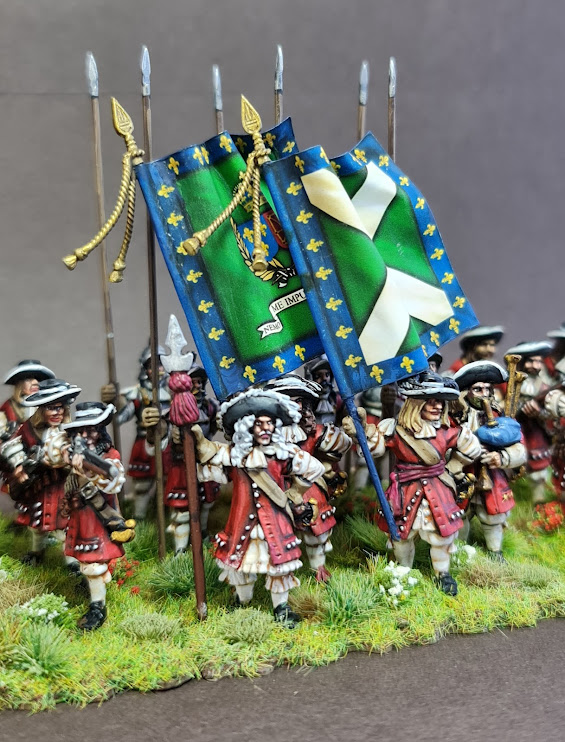 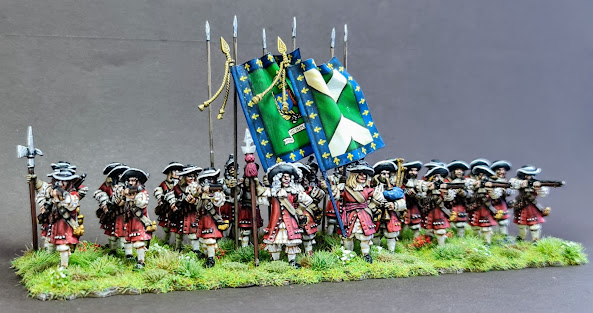 In other news... I'm currently working on the end of January update of the Ancient Army lists. I just received a restock of the Deep-Cut mats and terrain strips, and currently have all the bases, in fact happily I have pretty much everything in the BigRedBatShop in stock.
Posted by BigRedBat at 14:11 12 comments:

A Happy New Year to All!

Here in the BigRedBatCave we've had a busy Christmas and I've only managed a little modelling. However in the days before Christmas I finally managed to paint the walls and floor of my cellar storage space, which I hope you'll agree is looking pretty tidy. I only have around 5' 9" of headspace, but it will enable me to store a lot of minis, once I've fitted racking and sorted out the humidity. 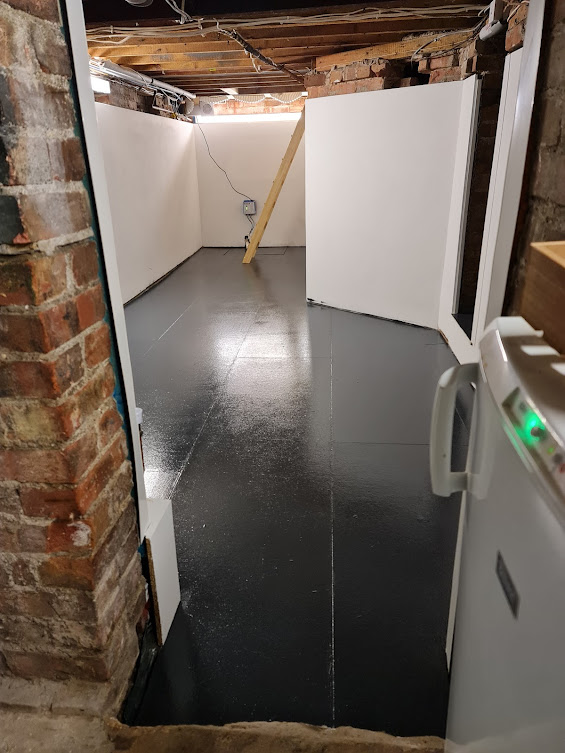 Below is the "before". 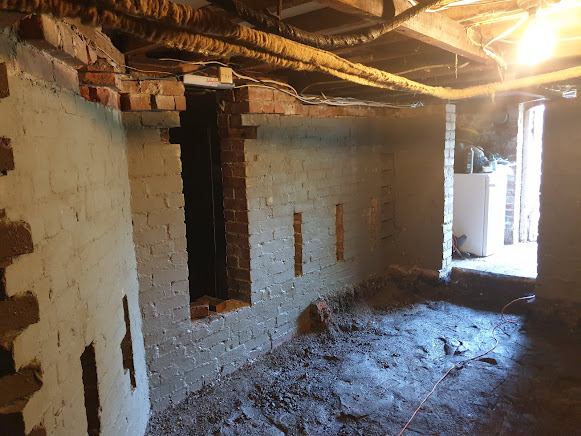 I hope everyone is safe and well. I feel very optimistic about 2022. I feel the prospects for life and gaming are likely to be much better, for us, this year- let's hope than none of our cards are Aces!
Posted by BigRedBat at 13:23 8 comments: