You wait six months for a Ptolemy, and then two come along at the same time... 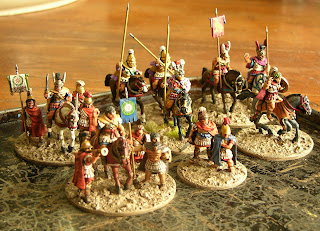 A hurried WIP shot of the remaining command stands for Sunday; flocking today!

I seem to have 2 Ptolemys.  I can't decide whether to go with the effete youth (front left) or the dashing cavalry commander (rear right).  Strangely, Alexander the Great has also joined his less illustrious heirs.

Echecrates the Thessalian commanded the mercenary horse on the Ptolemaic right, and contributed to their victory by defeating the opposing Seleucid cavalry wing. 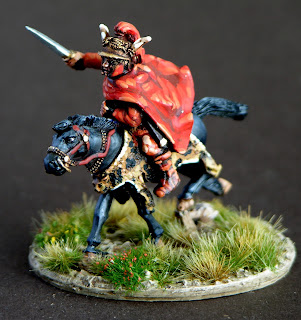 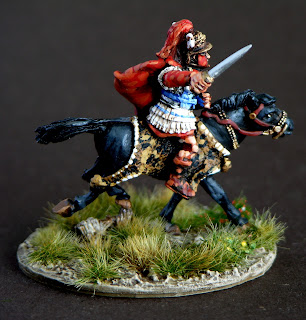 This is a lovely Aventine Pyrrhus casting, superbly painted by Raglan, who will proxy for Echecrates.  Gareth has a very interesting painting style, which I intend to study a little later on... reminds me of the Fauves.  I love his cloaks!
Posted by BigRedBat at 11:00 8 comments:

I’m frantically basing up the officers that I have, for command roles in the Ptolemaic army on Sunday.  They are somewhat rushed, but will look fine from afar.  Just don’t click!  ;-)

The first stand, left, is the guard commander, Eurylochus the Magnesian. I've used Polemarch figures with a converted Foundry Perseus as a standard bearer, holding an Aventine standard. 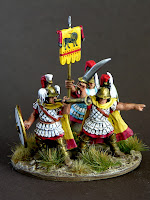 The second stand, right, represents Phoxidas the Achaean, who led the Ptolemaic mercenaries
(thureophoroi, I have assumed).   He played a key role in the battle, as it was their attack that routed the riff-raff on the Seleucid left.  Polemarch minis, with a Foundry standard bearer.


Ptolemy, himself, will be travelling in the Royal Mail today, from Nick.  In the finest traditions of show games, the varnish will, no doubt, be drying as I drive up the motorway!  :-)
Posted by BigRedBat at 10:06 10 comments: 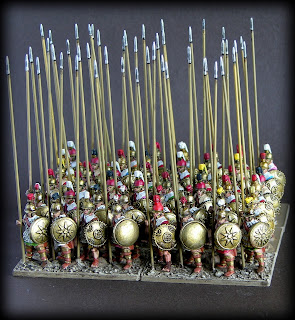 This is an unusual unit, as only the front 2 elements are fully based.  The rear 4 bases are temporary, and consist of 32 figures in the same pose.  When the figures that are still off with the painter arrive, I'll mix them together with these, and re-base.

I plan to carry on with the phalanx in a more low-key manner, after Raphia.  At some point, I'll want to build a late Macedonian or Seleucid phalanx, too.
Posted by BigRedBat at 10:07 10 comments:

I’m delighted to report that the counter on the front page of the BigRedBatCave ticked past half a million, last night.  Can I say a huge thank you to everyone who pops by and makes it worth my while posting!  It is a great pleasure to run the blog, and I have some ambitious plans for games and other ventures, during the rest of this year...

I’m minded to celebrate with a promotion, but WargamingGirl’s is still running, and I don’t want to clash with that; also I’m frantic in the run up to Raphia at Partizan on Sunday.  But I will do something in due course... please watch this space. 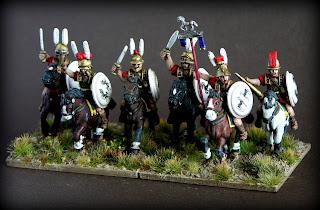 In the meanwhile, in the finest tradition of the BigRedBatCave, I shall celebrate by posting some minis that someone else has painted, far better than I ever could.  I bought these lovely Aventine Roman Allied cavalry from Redzed last year (as part of a small Republican Roman army), and gave them suitable shields and based them,  yesterday.  Luvverly!
Posted by BigRedBat at 11:10 22 comments:

My mate Dug has been sending me shots of the stunning Stalingrad game that he and mates ran at the recent Milton Keynes show.  All the models are 1/35th scale; many were made by his mate Mark.  As usual, all photos are clickable. 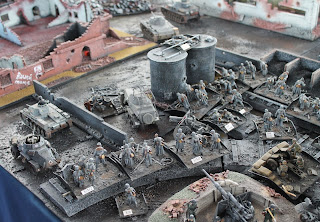 Above and below, Germans massing for the attack; note the snipers on top of the oil tanks, and the . 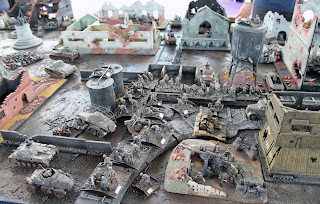 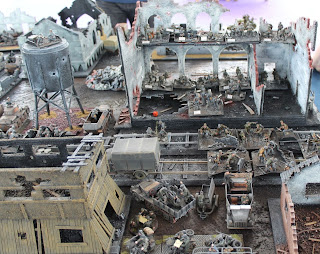 Below, the Russian defenders, some in the tank factory. 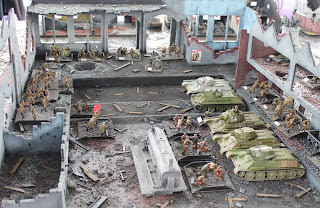 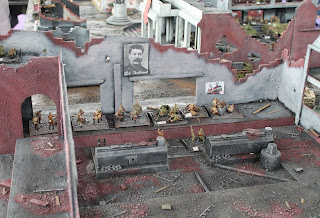 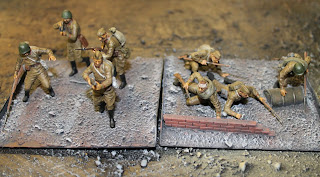 I beleive they play it using the "Crossfire" rules.  I am very much looking forward to seeing the game, in the flesh, at Colours in Newbury, in the Autumn.
Posted by BigRedBat at 14:37 8 comments:

Here are the cavalry from my small Assyrian force.  The miniatures above were professionally painted by Phil Riley of NyrOld, and the below are partly and eBay purchase, and partly by me.  Phil's are excellent, and the others aren't too shabby, either.  When time permits, I'll slap some decorative bands on the helmets, and some more tuftage and dust on the bases, so that they match my current standard.

The small army of which these form a part, is potentially for sale, please drop me a line at the address on the front page, if interested.
Posted by BigRedBat at 14:07 12 comments:

Email ThisBlogThis!Share to TwitterShare to FacebookShare to Pinterest
Labels: Assyria 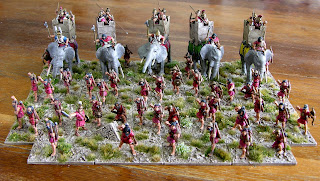 Last night I completed basing the Ptolemaic Elephant Corp, for Raphia.  Ptolemy deployed 73 of these African elephants in an attempt to counter the rather larger number of rather larger Seleucid Indians.  Unfortunately he failed to put them through the elephant equivalent of assertiveness training, and most of them subsequently routed back, through his own forces.  As usual, all photos are clickable.

The magnificent beasts and crews are from Aventine's range.  I painted the elephants, and my good friend Nick Speller, the crews (beautifully). 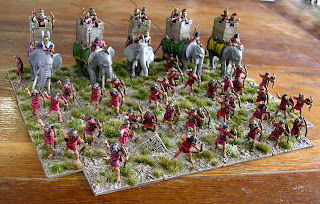 Nick also painted the escorting Cretan and NeoCretan archers, who are a mixture of Foundry and Gorgon miniatures.  You may be able to see that they are in several different shades of red.  In the game these will form 5 units, each of one elephant and two stands of escorts.
Posted by BigRedBat at 15:23 13 comments: 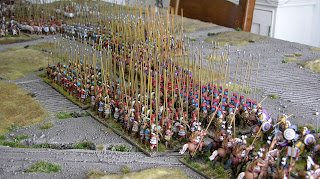 On Tuesday a couple of friends helped me rehearse the Raphia game, and test my rules.  The rehearsal went well (although I've subsequently tweaked the elephant rules, as the nellies needed more "oomph").  The above picture is clickable, so hopefully you can see the forest of pikes  is starting to come together, even though I have less than half of the minis we'll deploy on the day, on a table just half as long.  I'm getting near to the end of my preparations and Craig has been painting and posting furiously on his blog, too.

The game itself will be held at Partizan in Kelham Hall, near Newark on 2nd June 2012.  If you'd like to play, we can accommodate several players... just leave a message in comments, below.
Posted by BigRedBat at 09:37 22 comments:

Another day, another phalanx... 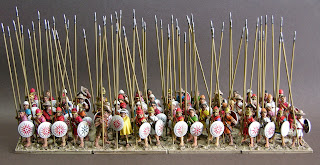 These are the based rear-rankers for my Machimoi phalanx, that I showed (unbased) a few days ago.

Machimoi were recruited from amongst the native Egyptians, and I've given some of them a slightly darker skin tone, accordingly.  Most are un-armoured (the armoured minority were painted by Craig, thanks!), and I based the tunic colours on those shown in Stephane Thions's Soldat Lagide.  I really love the Foundry WotG pikemen, and the un-armoured ones are so very easy to paint.
Posted by BigRedBat at 09:20 11 comments:

...the sheen of their spears was like stars on the sea 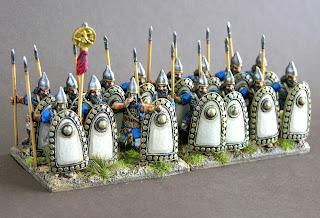 I bought elements of a small Eureka/Irregular Assyrian army some years ago, and have recently revisited them, with a view to either completing the army and using it, or selling it on.  I'll post a few shots over the next week , in between the pikemen.

These are the guards.  I've replaced the standard with one from Foundry, and given them iron helmets with the characteristic bronze band.  Oh, and I re-did the spearheads!
Posted by BigRedBat at 12:20 13 comments: 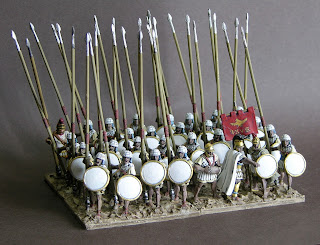 These minis have been lent to me by Dr. Simon, and I'm using them, along with the 40 minis lent me by Wabby George, to close my "pike gap".   Totting up on my fingers, I reckon that, once I've finished painting a final half dozen minis,  I may even have more pike than I need!
Posted by BigRedBat at 15:21 14 comments: 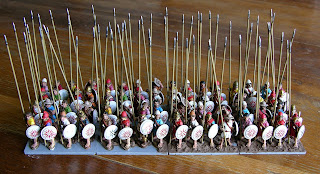 ...a quick WIP Shot of the last Machimoi for Raphia, in the early stages of basing.  These include the 40 I showed previously, 8 kindly donated by Craig, 12 more I just painted and the final scrapings of my eBay purchases.
Posted by BigRedBat at 10:14 4 comments: 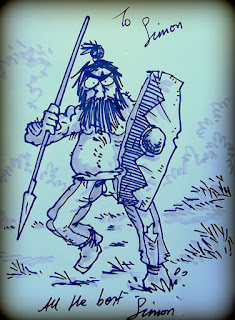 The most illustrious Ironmitten, has very kindly (and unexpectedly) sent me this wonderful cartoon this morning.  Many thanks, Simon!

I suspect that he picked a German, because he knows that I have been on the scrounge, recently, for Germans for my next project.  Post Partizan, I want to assemble a small German army of 250 or so  miniatures.   I've been able to pick up some painted minis from eBay, some from friends (watch this space) and hopefully some from painter mate Nick Speller, who painted my sole German infantry unit, so far (below).

They will be a nice change, from pikes!
Posted by BigRedBat at 14:46 19 comments: 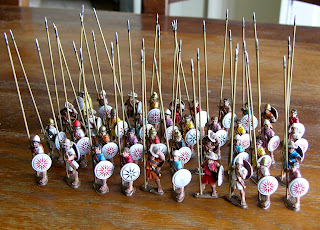 I've still not received the phalanx minis I was hoping to get from my painter, so I have been redoubling my painting efforts in order to close the gap.  Here are 40 more Ptolemaic peasants, ready to fill the rear ranks of the machimoi phalanx.  I'm desperately painting another batch, and am also going to borrow a phalanx off mate George, tonight.

Craig Davey has been busy, with the opposition...
Posted by BigRedBat at 10:57 9 comments:

I thought it might be fun to sum up where I've got to, with 30 days to go.

Here are the other elements of the phalanx, finished so far.  All are clickable...  The line:-

Finally, below is a collage of the 6 finished units, so far; 2 machimoi, 2 line, the libyans and the peltastoi/agema.  You'll need to click this one... 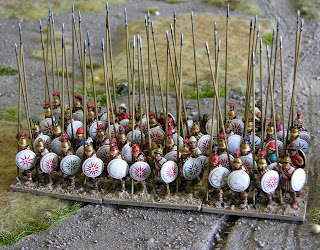 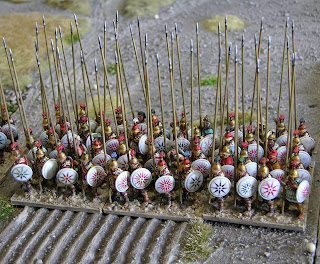 Machimoi was an Egyptian term for native soldiers, in this case raised as an emergency force and trained as phalangites, by Ptolemy IV, to resist the Seleucid invasion.

The miniatures are a blend of Gripping Beast Polemarch and Foundry (the unarmoured ones).  The shield transfers are from LBMS, Steve there very kindly produced some additional sheets for me, with battle-damaged designs.  I'm preparing some rear-rank elements with more unarmoured, bare-headed troops.

And now... both together!