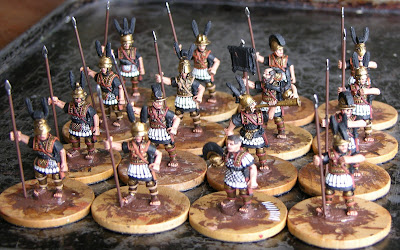 On the other hand, last night I managed to block in the linen pteurges relatively quickly, and they are starting to look like painted minis at last. Tonight it's the red tunics, and after that it is just the shields and snagging. I have splashed out on the LBMS shield designs for these minis; morover, I have even bought the white battle-worn transfers; paying for white shield covers, utter madness!

I've also ordered most of the rest of the Italian Legion (32 Hastati, 32 Principes), and enough cavalry to finish a squadron. I couldn't resist buying a couple of units worth of the Volscians, including the splendid command pack. This is not going to help with my New Years Resolutions...
Posted by BigRedBat at 11:02 4 comments: 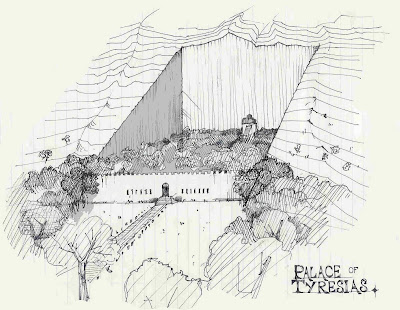 On Friday last, my boys + friends AD&D adventuring party stumbled back in time to 1984 and discovered my multilevel-dungeon.

This is a scanned and retouched image from the 1984 frontspiece. Whilst there are elements of "Tyresias" that I'm not entirely happy with (the Kobolds of the Golden parrot, for example!), much of it seems to have borne the passage of time really well and I'm refurbing (and even extending!) the place.

I wonder whether anyone else out there is writing for AD&D?
Posted by BigRedBat at 19:10 4 comments: 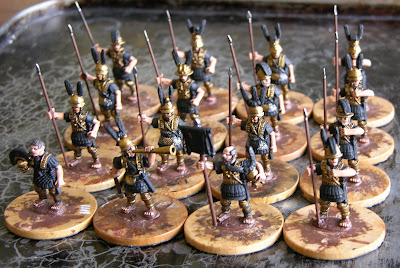 I'm going to post occasional updates on the progress of my Aventine Etruscans. This (unfortunately slightly blurry) image shows progress after the 6th painting session. The first 4 were on flesh tones, the fifth tidied up edges with black and painted steel/iron, and the sixth sorted out the bronze. I guess I've spent about 12 hours in total on them, so far.

The minis are a pleasure to paint. There is quite a lot of detail, but it is in good relief. They remind me somewhat of the Saleh WotGs, which suits me nicely. I think it's going to take me the best part of 3 weeks to finish and base them (but hopefully the more simply equipped Hastati and Velites will be faster to paint).
Posted by BigRedBat at 11:26 2 comments:

Honest, I have been painting stuff...

I've regrouped after my brief holiday refurbing 1980's D&D Minis, and am back in the saddle with the ancients painting. 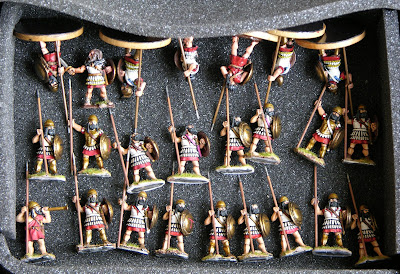 Above are the Tegeans, that have long been lurking on the painting table; they are all retouched and ready for varnishing. Unfortunately I have been waiting 2 weeks for the Testors Dullcoat that I need for the next step, so they are in a holding pattern! Grrr. 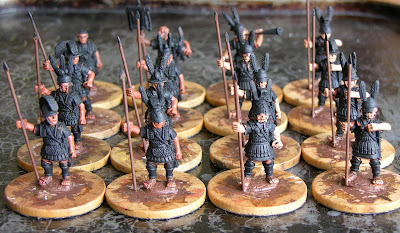 I'm very excited about these minis; my first unit of the excellent Aventine minis ( http://www.aventineminiatures.co.uk ), and at the same time the first unit I'm specifically painting for the SOA Zama game. They are going to be a long job, but I'll make sure that I work on them every day until they are finished.

They represent the Triarii of an allied legion; this will ultimately include 16 Triarii, 32 Hastati, 32 Principes and 32 Velites. Keith at Aventine is painting a matching allied legion; we'll need 2 Roman legions, later on. There's more information about the Zama project here: http://bigredbat.blogspot.com/search/label/Operation%20Zama
Posted by BigRedBat at 10:57 12 comments:

Does anyone recognise these Drow? 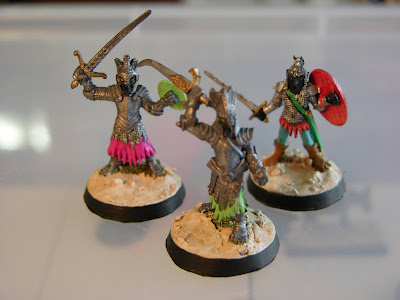 I think they are Ral Partha, but I can't find them in a catalogue or online. I really like the minis and want to buy a few more... especially if I can find some with crossbows. If anyone has a code that would be fantastic.

My (temporary) diversion into fantasy has continued; the kids completed the Village of Hommlet after an epic final encounter, and now have buckets of treasure burning holes in their moneybags. Next, I'm toying with running a multi-level dungeon I wrote around '85. With 24 years perspective, it doesn't look bad at all; needs a little work, and I'd need to buy/paint a few more minis.

I must confess to having squandered the better part of 2 weeks refurbing/rebasing my D&D figures. Tonight I shall get back to Ancients!
Posted by BigRedBat at 18:36 3 comments:

Wot I have been doing...

Alarmingly little painting, thats what! The end of the school term has led to a rash of parents evenings and social events that have cut my painting to a slow crawl. This week I've managed a little more work on the Tegeans, and I've rebased some spare fantasy miniatures for AD&D. I hope to finish basing the Tegeans by Friday so that I can start the Zama project!

On the AD&D front, we had a third very enjoyable dungeon delve last Saturday. At one stage, the entire party was staring death in the face; however the wizard managed to rescue them with his one (only moderately) useful spell "Dancing Lights". They are nearing the tail end of Hommlet and I'm toying with literally dusting off an old dungeon of my own, that I think they might enjoy...
Posted by BigRedBat at 16:32 3 comments:

Inspired by Greg Privat, and by the "Year of Frugal Gaming" site, back at the end of last December I set myself some resolutions.

As von Molkte once said, "No battle plan survives contact with the enemy", and my resolutions have largely failed to survive contact with 2009. Reviewing them in turn:-

1. Finish the Pictish minis I promised myself I'd finish by the end of December, by the end of January. I managed to finish these by the end of February; a minor tactical defeat.
2. 2009 is declared "Year of the Early Imperial Roman Auxiliary" I've painted/based 48; less than half of what I want, but at least I am "over the top".
3. ...except that I also have to finish the Celtic army Which isn't exactly finished, but has got somewhat larger...
4. Develop a set of rules with Ian that enable me to use my 24-man units I've done some work on this, and although they are very very far from being finished I am contemplating a test game, perhaps as early as tomorrow
5. Run a Roman Campaign Abject defeat here; without the right set of rules, I've not been tempted to start one.
6. Buy less minis than I paint I was doing very well with this, but couldn't resist a couple of Foundry armies on eBay and currently have 130 more unpainted minis more than I had last year. However, in a normal year I'd probably be 500 up! So I'm conducting a fighting retreat. Mind you I have just bought another 24 on eBay, whilst writing this post. :-(
7. Collection must be cash-neutral in 2009 This is my most serious reverse; I'm afraid I've spent £920 so far this year on miniatures (although the trend is decreasing).
8. Take more photos! Now this one I have done! :-)

Sorted.
Posted by BigRedBat at 17:41 No comments: 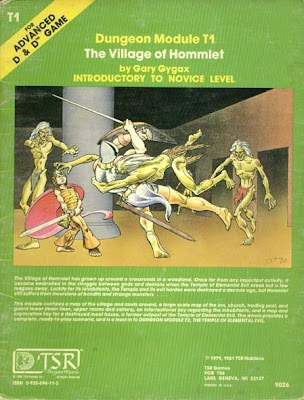 At the weekend I ran a second D&D session for several of the smaller RedBats and friends. I've been really surprised how many and how enthusiastic they have been; we had a party of seven, including a couple of girls, which is really nice.

We are doing the Village of Hommlet, and doing it old-style; Second edition AD&D played exactly like it was played in the early 1980s (when I adventured there). The kids have all picked it up quickly and I'm looking forward to running a weekly session for the next month. It's all very nostalgic!
Posted by BigRedBat at 11:16 6 comments:

On the Painting Table...

It's been a slow week painting-wise, because Mrs Bat has been suffering from the dreaded lurgi. 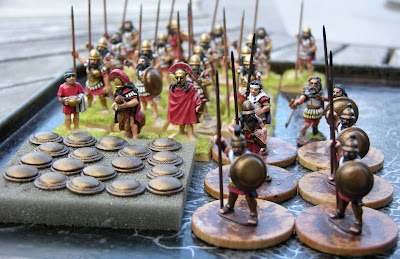 However, the Tegean unit (Spartan allies, above) is approaching completion; I've painted 7 figures to match 20 very nicely painted minis I bought on eBay (I'd love to know who originally painted them, please let me know if you recognise them). I just need to finish the shields and do the basing. 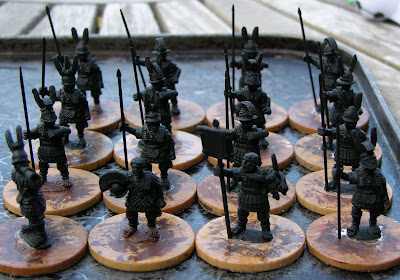 And above, primed, are the long-awaitied Aventine North Etruscan League minis, which are also the first unit of my Allied Italian legion, for Zama!
Posted by BigRedBat at 19:08 2 comments:

I promise that this is the final post featuring elephants for the time being! I'm going to compare the Empire Models (Indian) elephant, on the right in each photo, with three African elephants from other ranges, in part to convey the sheer mass of the former. Indian elephants should be much larger than African forest elephants, and Empire's certainly is!  All photos are clickable.

The African elephants will all feature at the Society of Ancients Zama game, next year. 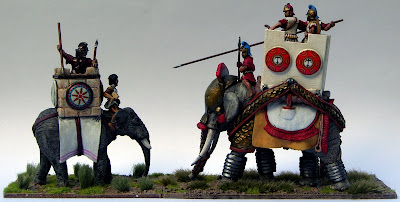 First (above) we have the Gripping Beast Carthaginian elephant http://www.grippingbeast.com/shop.php?CatID=154 . This would convert very well to become a Ptolemaic elephant at Raphia; it is very much smaller than Empire's Indian, but then it should be! The bulk of the Indian elephants at Raphia apparently gave them a considerable advantage. 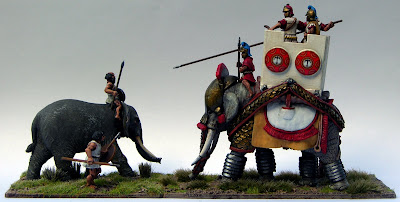 The second elephant (above) is an African from Essex http://www.essexminiatures.co.uk/frames25mmcont.html . I feel this is the least satisfactory of my Africans, and won't be buying more; it doesn't look much like I think an African Forest Elephant should appear. It is very plump and rounded, with 'orrible thickish legs. 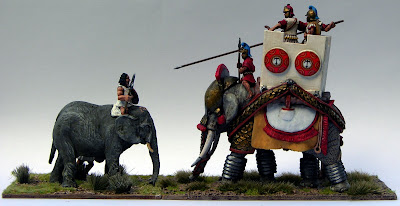 Finally, we have a heavily converted Renegade elephant http://www.renegademiniatures.com/numidian.htm
. The basic Renegade elephant is an unhappy composite between an Indian and an African elephant, with features of each; however, extensive work with greenstuff makes it into a rather satisfactory African Forest nellie, in my view at least, and it is my favourite African at the moment (not least because it was the cheapest, at £6).

Altogether we will field 11 elephants for the Society of Ancients Zama game next April; my six, another 4 from my mate Dr Simon, and one that still needs to be sourced. In our first game trialling the battle, they managed to inflict a surprising amount of damage against their Roman foes; rather more, in fact, than they should have!
Posted by BigRedBat at 19:30 6 comments:

And now for Something Completely Different... 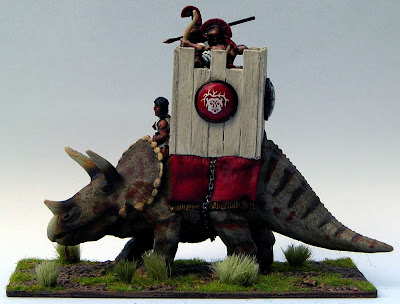 Long before I painted elephants, small and large, I knocked up these Lunar War Triceratops for the Dwarf Mine game I put on with Greg and others, at Salute.

The Triceratops are really nice models (from Schleich), that cost around £6 each. They are roughly similar in size to the Empire Modles beasts. I partially repainted, added the howdahs and gave them Foundry crew and Gripping Beast mahouts.

They were cheap, very quick to complete and unfortunately always died far too early in the game!
Posted by BigRedBat at 18:42 6 comments: