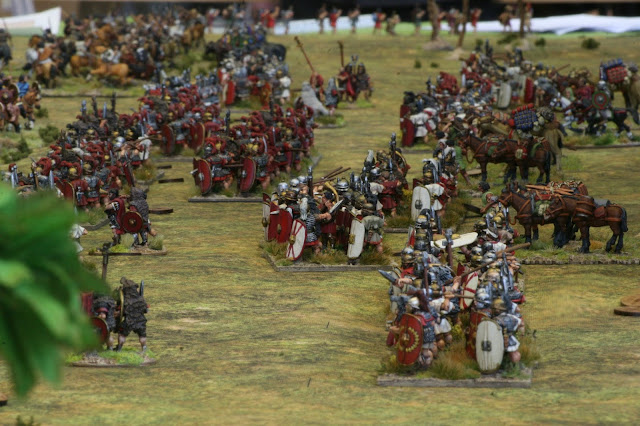 "To the Scottest!", the first official "TtS!" tournament to be held in Scotland,  will take place at the Sea Cadet hall, Methil, Leven KY8 3RE, on the weekend of the 22nd and 23rd of September 2018. The event is Saxon Dog's baby but I'll be helping with the delivery.  ;-)

On the Saturday we'll each play four games with 130 point, 28mm armies (in much the same manner as at Chalgrove, for those who have fought there). On the Sunday we will play larger multiplayer games. It will be a good-natured event, with plenty of help on hand for those unfamiliar with the rules. We'll go out for a meal and drinks on the Saturday night.

I'll be accompanied by a small but elite band of Sassenach invaders, including Steve Dover, who organises Chalgrove, and two TtS! World Champions, Simon Purchon and Philip Marshall.

We'd like players to bring armies from the Greek, Macedonian and Punic wars- anything from the "Frogs around a Pond", "Kingdoms of the East" or the "Rise of Rome" booklets. However, if you don't have an army from those periods, don't let it put you off- please bring whatever you have! If you don't have any 28mm army at all, we can loan you one.

The cost for the weekend gaming will cost £25 including lunch on the two days. All profits will be donated to the Sea Cadets. Spartan overnight accommodation is also available at the the Cadet Hall- and for the less hardy, there are hotels in the area.

If you would like to take part or have questions, please mail me in the first instance (my email address is to the left of this blog post)- I'll reserve your space and help with your list. I hope to see some familiar faces and lots of new ones!

Best, Simon
Posted by BigRedBat at 11:01 No comments: 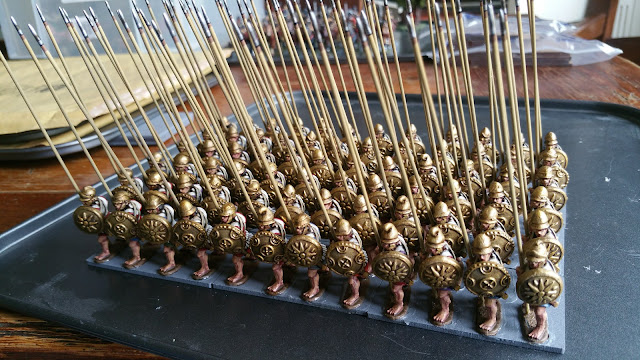 I'm back from a short break and trying to complete my latest phalanx in time for T'Other Partizan. These are all pretty Wargames Foundry phalangites, with their pikes at around 20 degrees form the vertical. I'm going to need some more of these and some with lowered pikes, to boot. I want some of my taxeis to have the full dramatic effect that one sees in Connolly, etc. These are six ranks deep - I mostly field pike this way, now.

All the minis were painted by Shaun McTague, I added the pikes, inked, highlighted some areas and varnished.

Basing should be complete this week. I'll have pretty much all of my phalangites at Partizan, if you are coming... 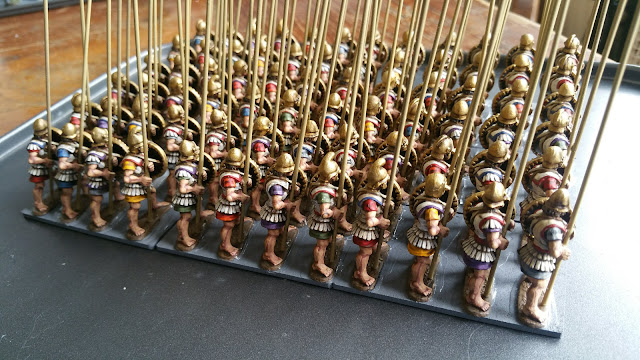 Posted by BigRedBat at 15:26 No comments: 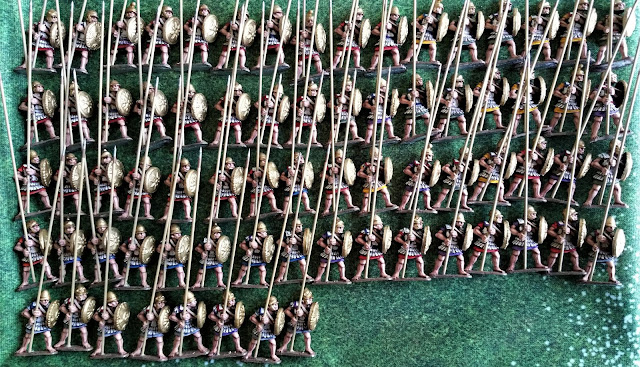 On the heels of the elephants, I'm putting a new phalanx together. These are Wargames Foundry World of the Greek phalangites, very nice minis, with the pikes around 20 degrees from the vertical. They have again been painted by Shaun Mc Tague and I'm fitting the pikes, highlighting and varnishing prior to basing. They will form the front rank of a demonstration phalanx at Partizan. I now very much covet a couple of attacking ranks, with lowered pike, to go in front of them....
Posted by BigRedBat at 14:18 No comments: 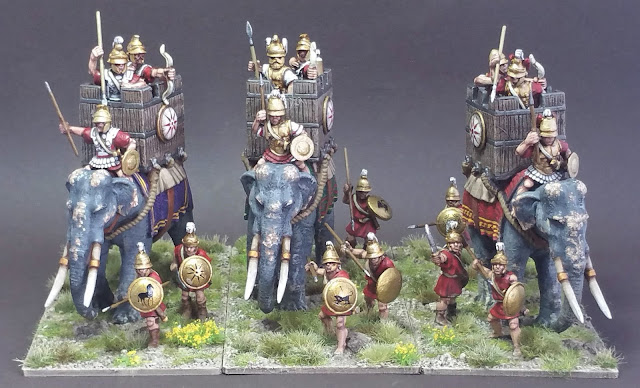 Today I've commissioned three more elephants into my Hellenistic army. These are beautiful Aventines (the old metal ones- the new resins are even better), painted by Shaun McTague with some detailing and basing by me. The elephant guards are Wargames Foundry peltasts; photo is clickable. 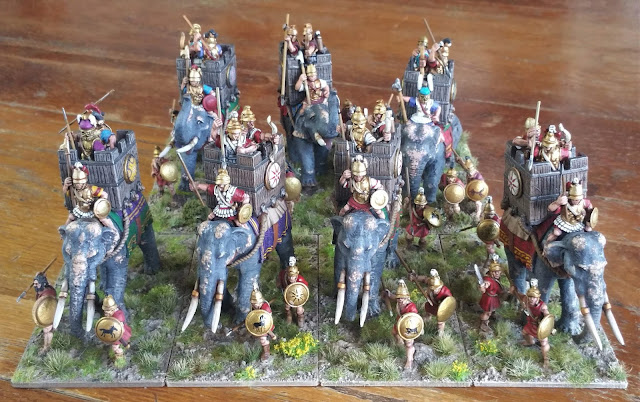 Above and below are the seven Hellenistics. I was pleased that I was able to successfully match the basing of the four earlier elements. I like to depict the skin pigmentation failure that one sees on older Indian elephants.

I now have the seven Hellenistic Indians, four Indian Indians, five Ptolemaic Africans and eight Numidian Africans, for a total herd of twenty four pachyderms. I plan to add at least a dozen more by Christmas. To fight all of the Hellenistic battles, one needs a surprising variety of elephants of different species, with/without howdahs and with different crews and heraldry. So rather more will be needed; I might well end up with 50-ish. Luckily for the joists, the new Aventines are resin!

In other news, I have put my To the Strongest! Ancient and Medieval rules on sale for a few days, you can find them here! https://bigredbatshop.co.uk/collections/all/on-sale
Posted by BigRedBat at 12:39 No comments:

On the painting trays.... 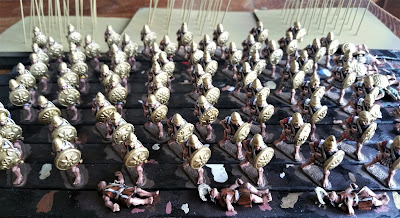 Shaun McTague dropped off a bunch of pike men this week. These are very nice Foundry models with pikes angled forward, and he's done a fine job. They will form the front ranks of a somewhat exceptional phalanx I'm preparing for t'other Partizan. We are going to fight Magnesia 190 BCE - if you'd like to play play please drop me a line and I'll book you in!

Below are three splendid Aventine elephants, also painted by Shaun, that will also shortly be joining my armies. Elephants figure considerably in my plans for 2019; of which more, anon... and one can't have too many elephants. 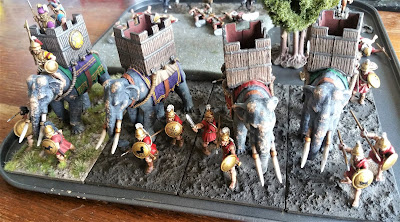 Posted by BigRedBat at 16:25 No comments: