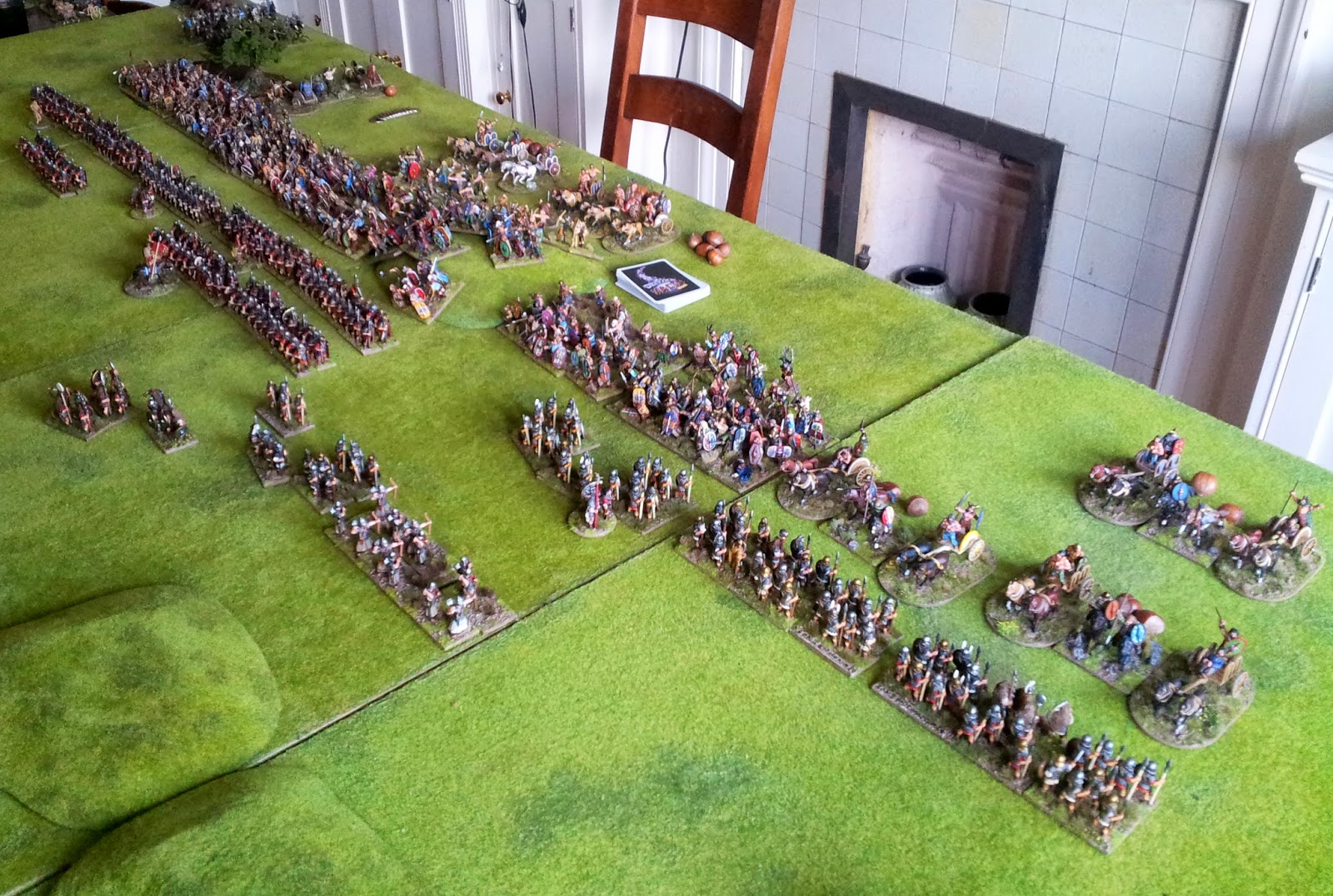 I played a test game of my rules with Ian and Dr. Simon last night, but couldn't find my box that contains all the markers.  We had to improvise; we used coins for the victory medals, and Hazelnuts for the ammo markers!

We agreed that the Celts are somewhat overpriced compared to the Romans.  Today I've been tweaking the rules, and thinking about heroes...
Posted by BigRedBat at 17:30 No comments:

Marvel to the sibilant tones of the eponymous Bat, 40 seconds in on this Beasts of War video of Salute 2014.  And note the themed T-shirt!

I think I deserve a certain degree of kudos for introducing the W40K crowd to the obscure 1st Century AD Roman military author Frontinus.  :-)  I was like a rabbit in the headlights.

Many thanks to Craig Cartmell for sending me the link.
Posted by BigRedBat at 19:38 No comments:

Apologies for the recent lack of posts; I've been hard at the brush.

I estimate I'm at least half way through my big Roman project, and on target for Partizan.  In the below camera phone photos, you can see that I've re-organised the part-painted minis into their respective legions. I am going to focus on finishing the yellow shields first. 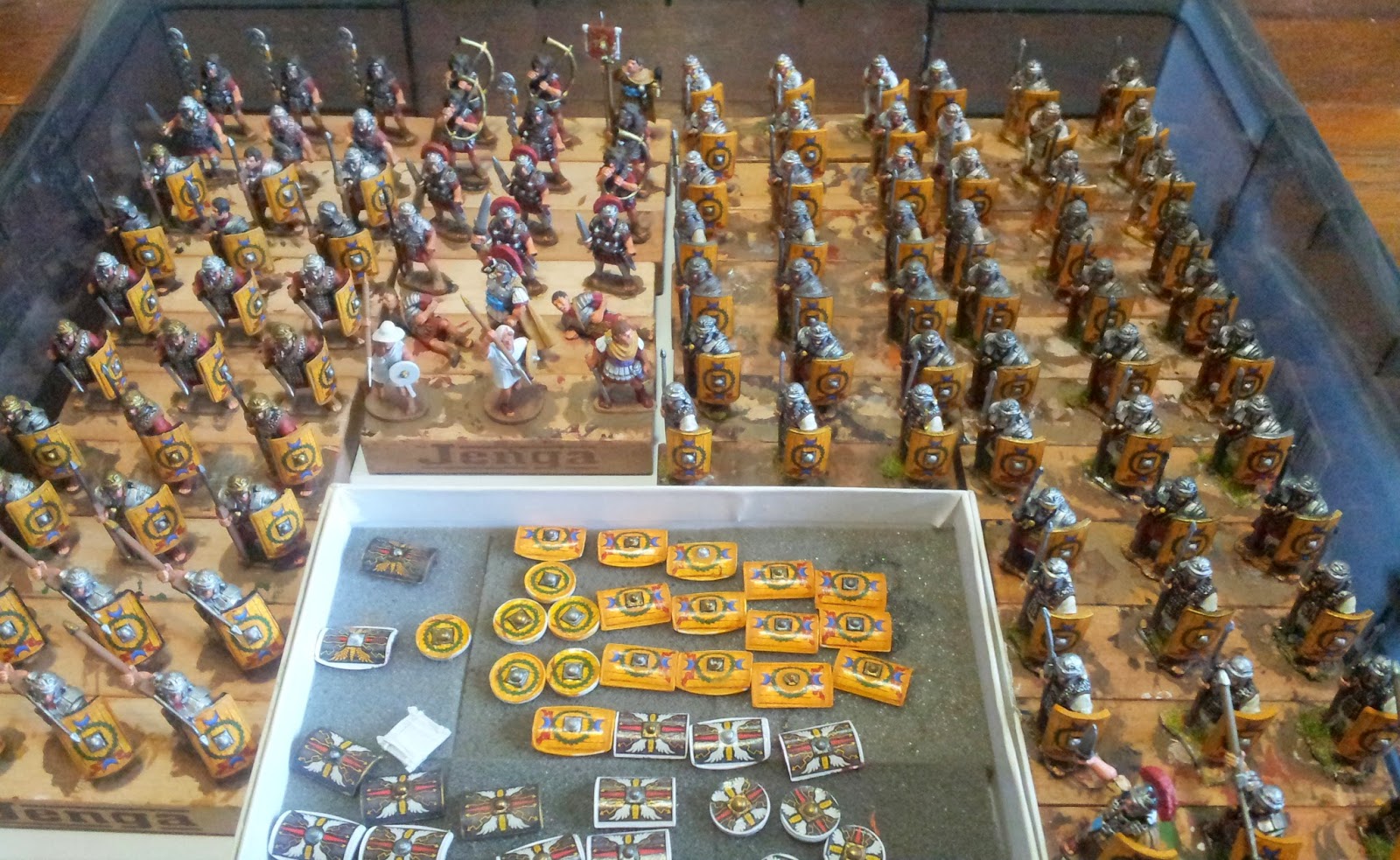 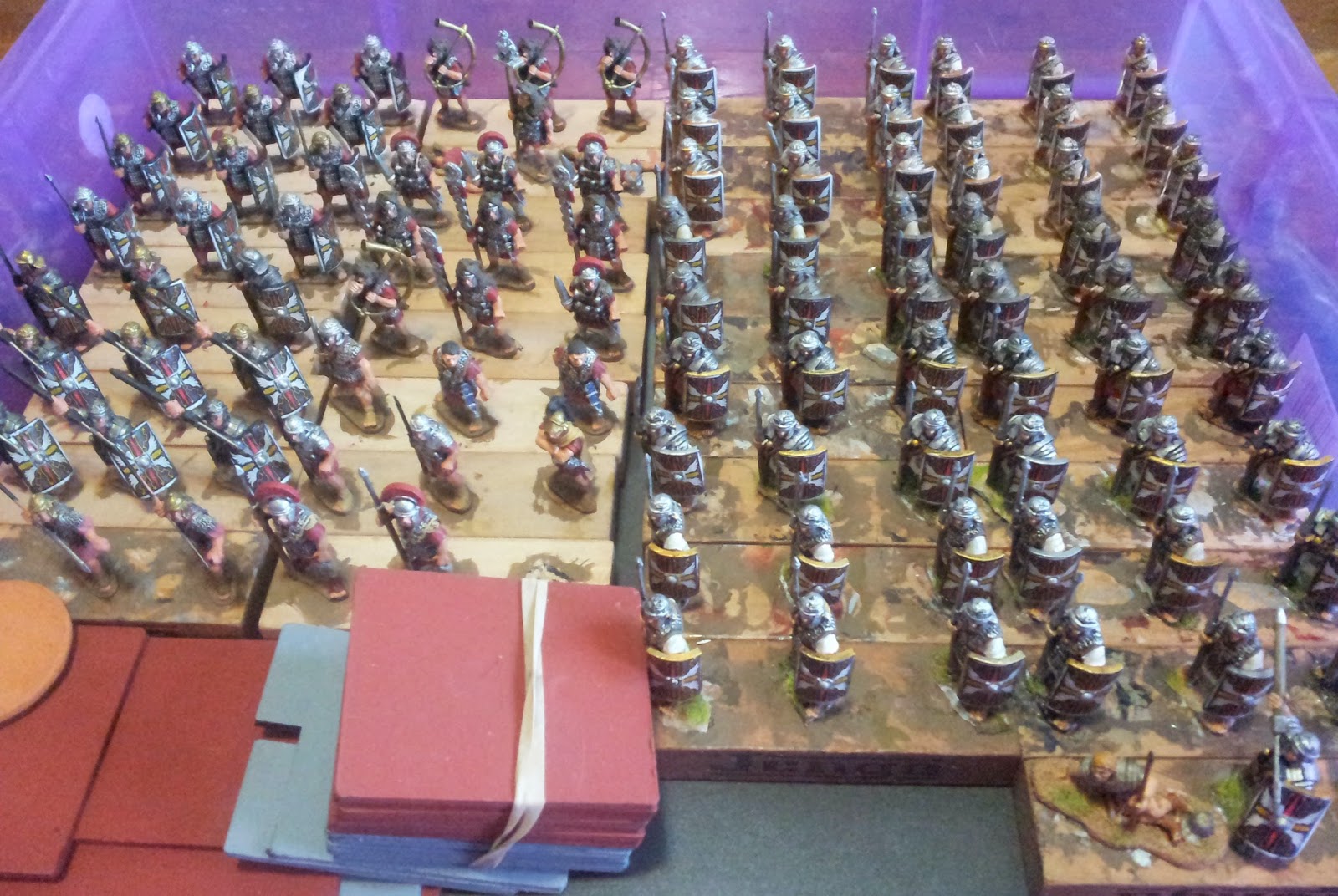 I've been really enjoying this job, so much that I've ordered enough additional transfers from Steve at LBMS for a new legion, and for various extra units to increase the size of the other legions to 125 each.

A couple of Victrix Steve's plastic peltasts have infiltrated the metal figures.  I'm painting them up as tests for a future project.
Posted by BigRedBat at 14:05 No comments:

A question of scale

Around two years back, I decided that I would adopt a smaller representative scale on my legions. With 100 men to a legion, as below, I'd be able to build enough of them to re-fight the larger Civil War battles to which I aspire.

For some weeks I've been painting legionaries, and I'm making really good progress on two new legions. New figures are rolling off the production line at a rate of knots.

In fact I am making such good progress, that it has struck me that I could, potentially, increase the size of the legions to 125 figures each (a 1:40 scale). I'd only need to paint another 100 minis or so in order to bring my forces up to this revised strength, and then I would be able to deploy the legions in a triple line, rather than the double line above. At the same time, I could take the opportunity to re-base some of the older figures to my new, improved standard, 8 figures to a 60 x 50mm base.

This has to be done... after Partizan, perhaps for SELWG.
Posted by BigRedBat at 15:42 No comments:

All downhill to Partizan... 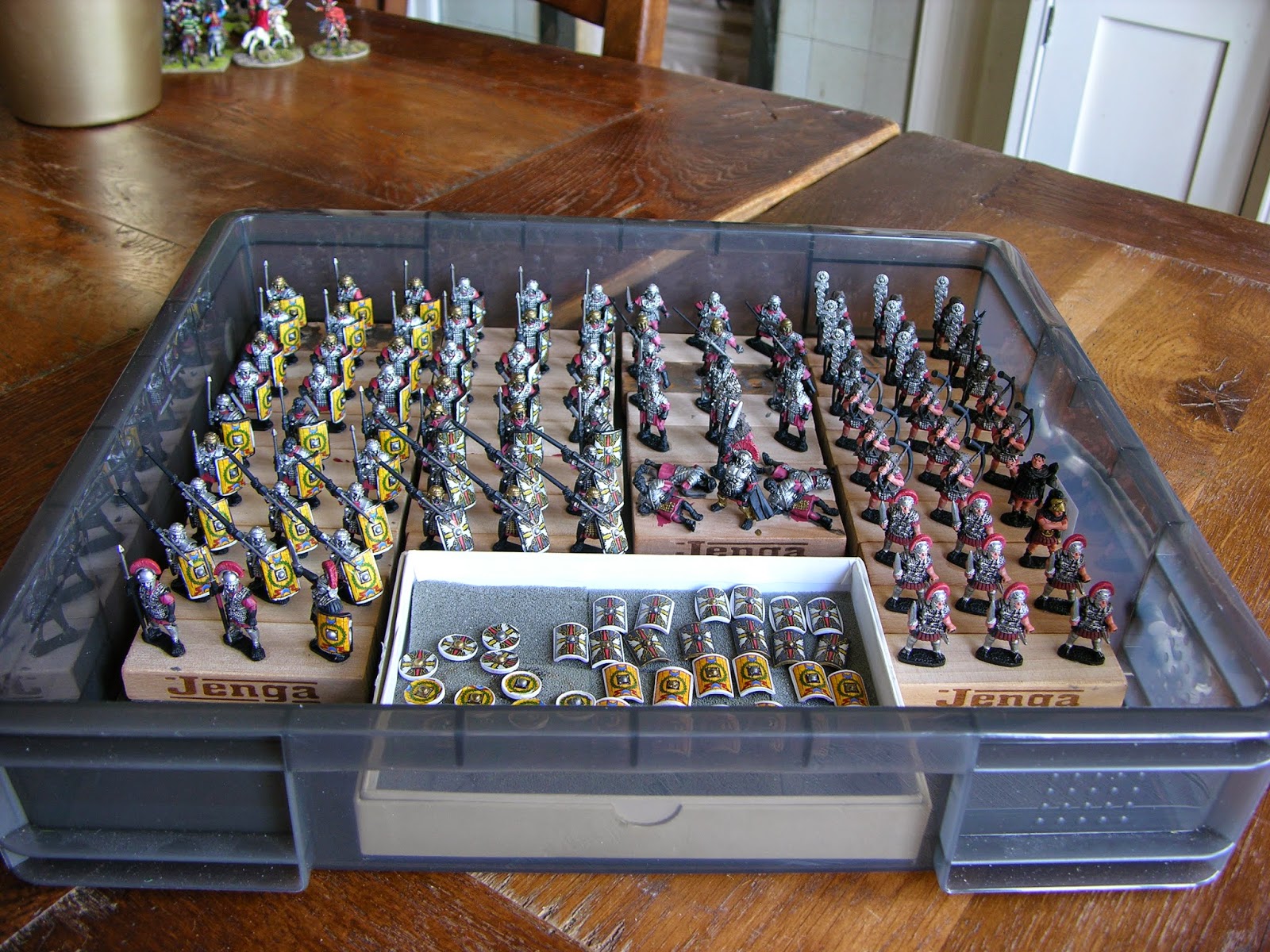 With Salute behind me, it's all downhill towards Partizan. Here are the two new 100-strong legions I'm raising for the next game; above are the minis I'm painting from scratch, and below the pre-loved minis I bought from Legatus Hedlius, and on eBay. There are around 190 Little Big Man Studios transfers involved; I managed to fit all of these, safely, without wasting a single one. It is a little daunting that I need to finish around five of the above minis each and every night until the date of the show (not to mention building the terrain), but I reckon I can do it...
Posted by BigRedBat at 14:22 No comments:

Email ThisBlogThis!Share to TwitterShare to FacebookShare to Pinterest
Labels: Partizan

As I mentioned in my last post, I forgot my camera but several people have kindly sent me photos of the game.  First, some wide shots from Legatus Hedlius; a shot along the length of the table. 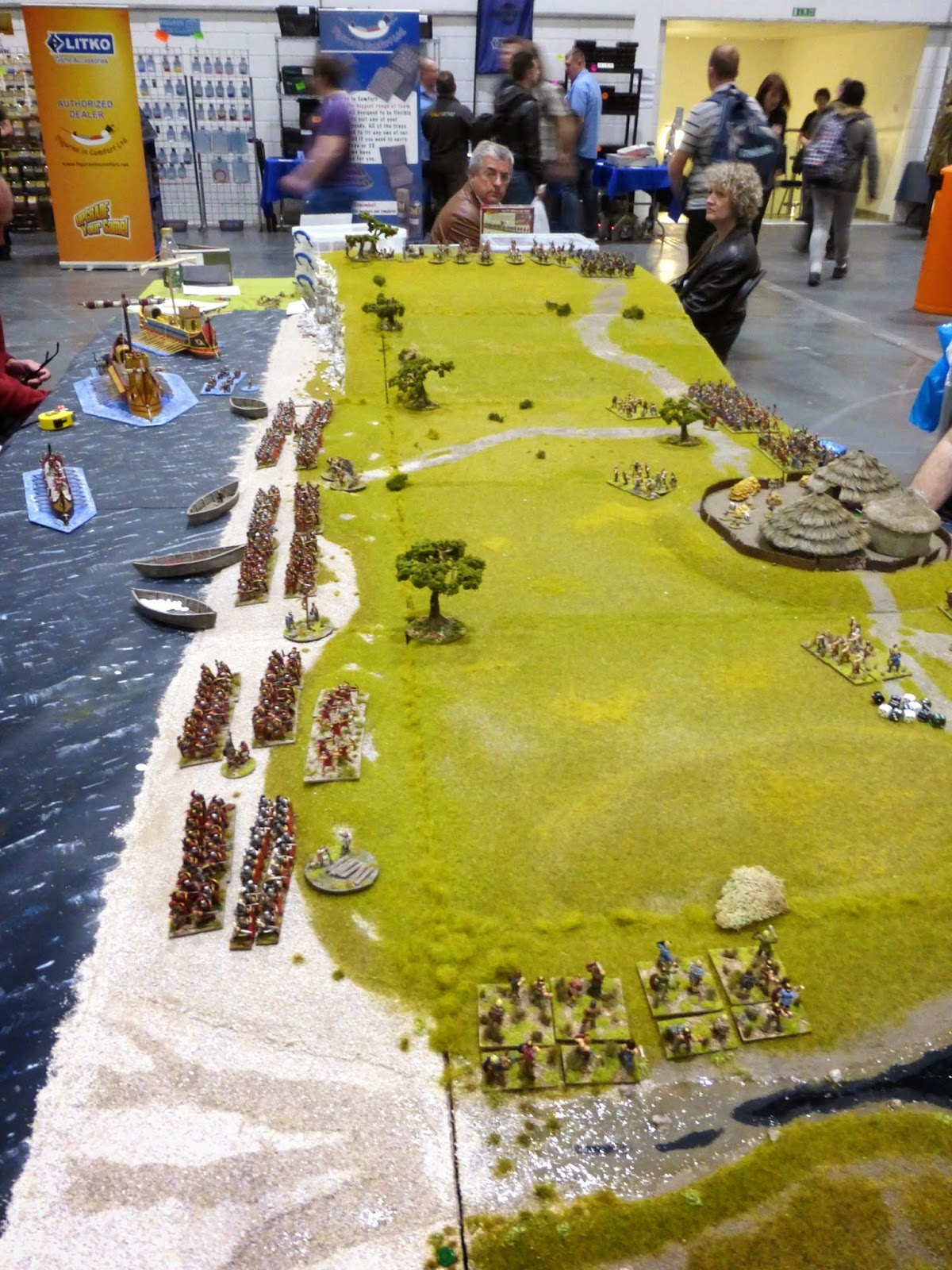 And below, in the heat of action, with the game being run by the Brixham Berserks. 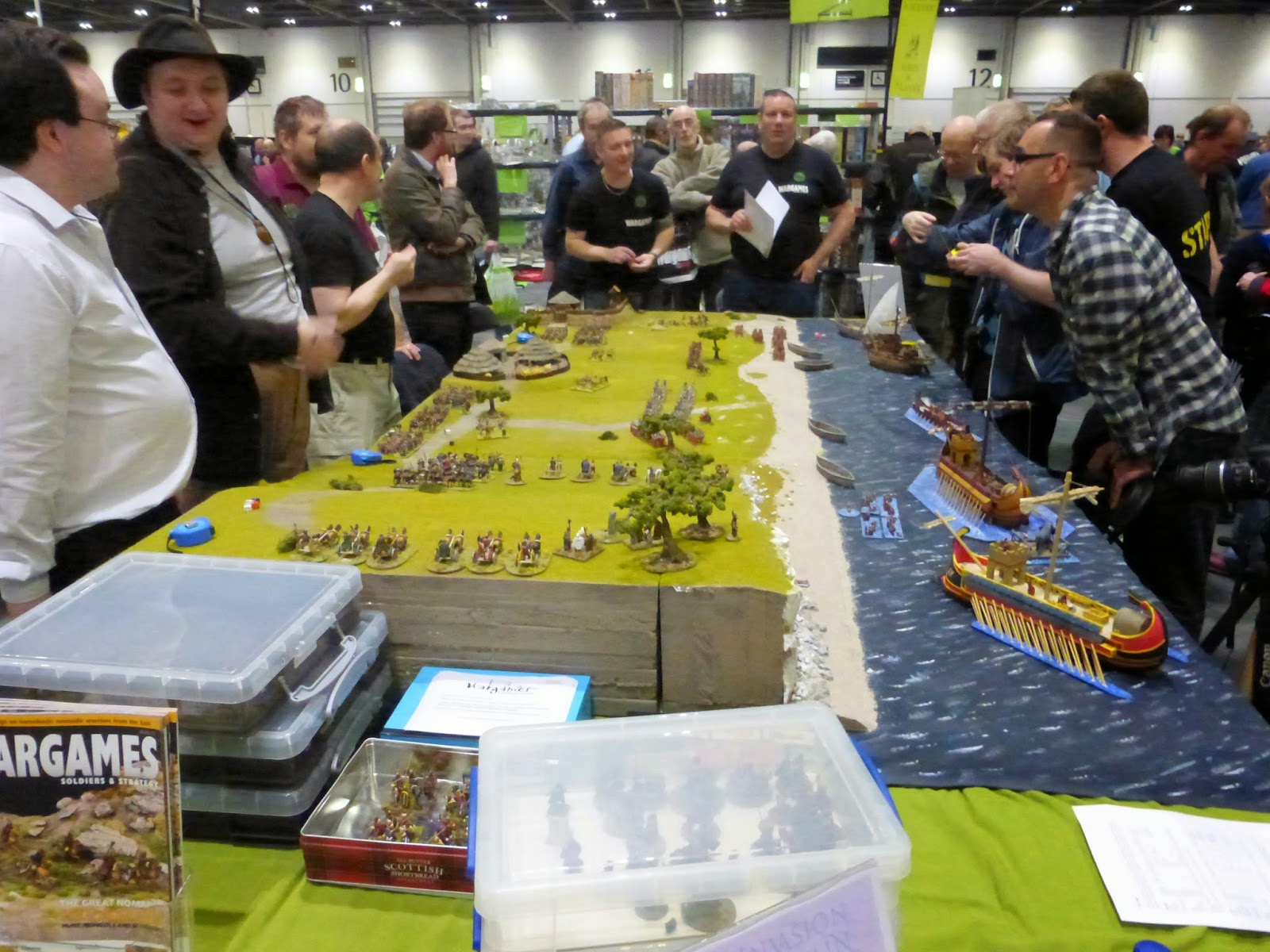 ...and also of Mark Backhouse (below). 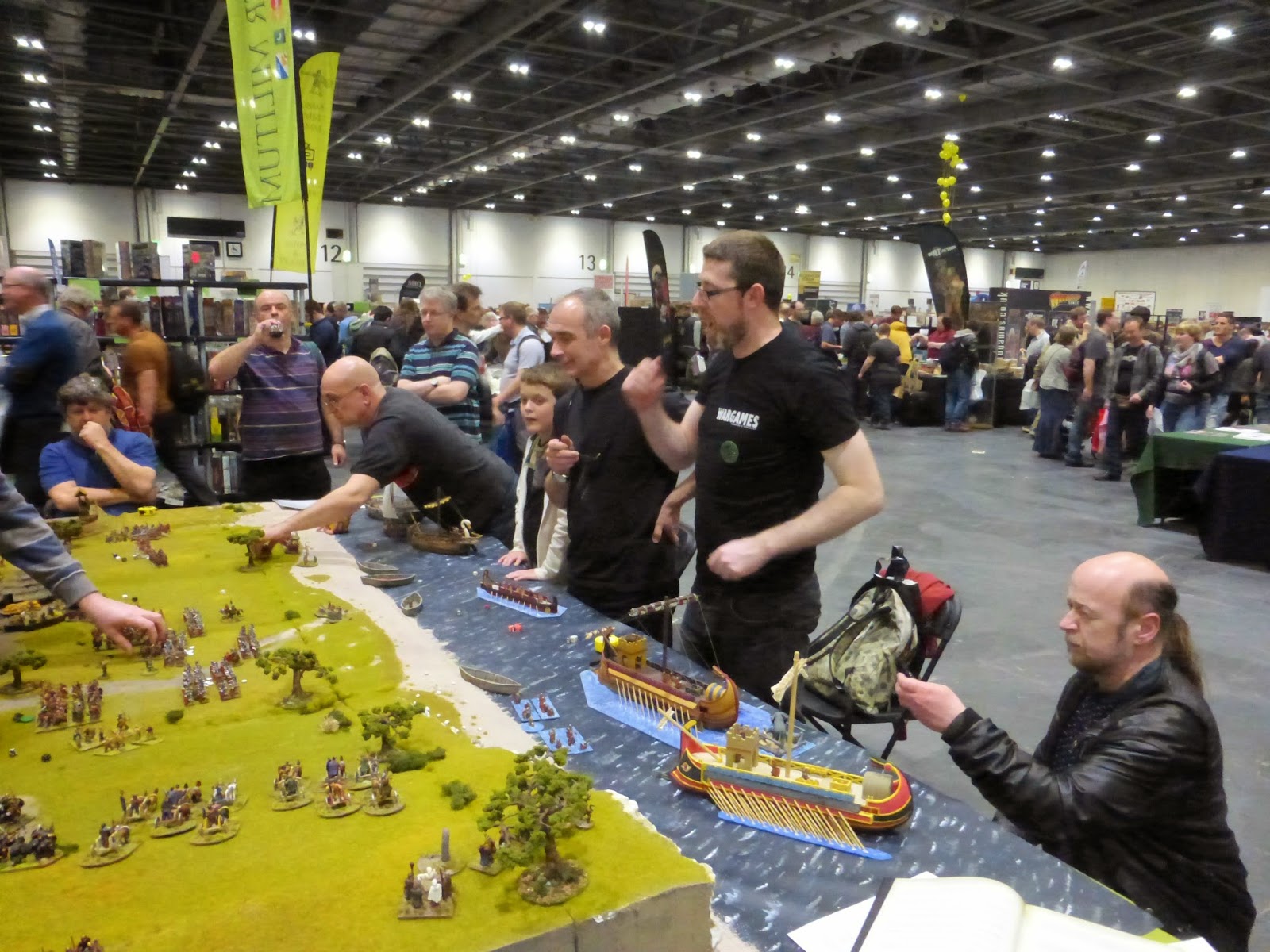 We had three transports, three galleys and 4 "landing barges" in the game, some are in the shot below.  I loved the colour of Mark's trade ship, on the right. 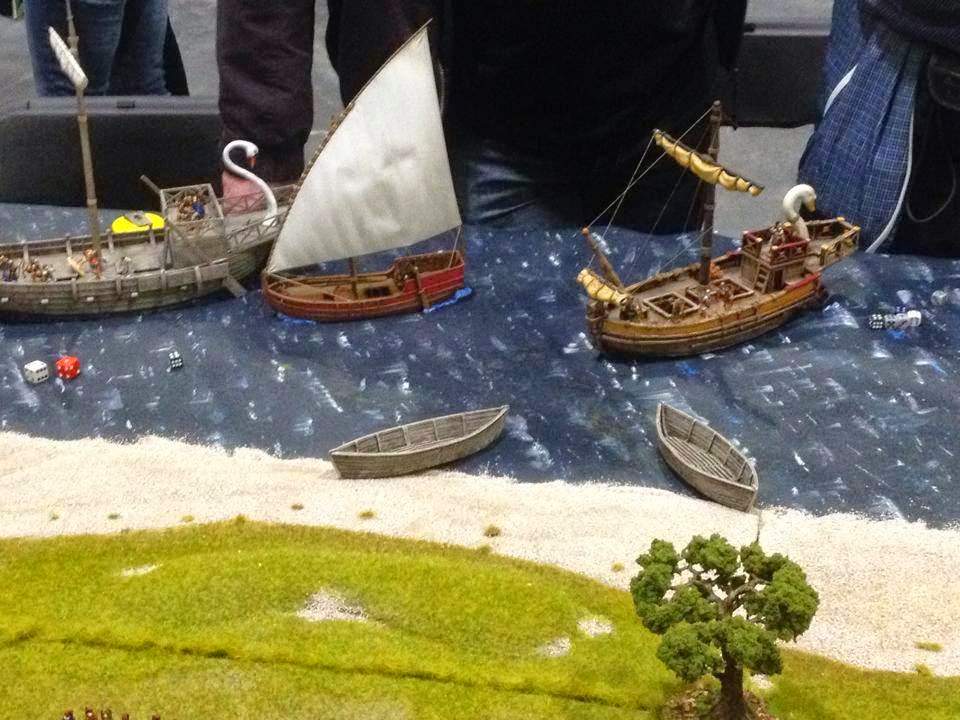 Alan Daniels took some closeups; here some legionaries are gambling on the deck of one of the galleys. 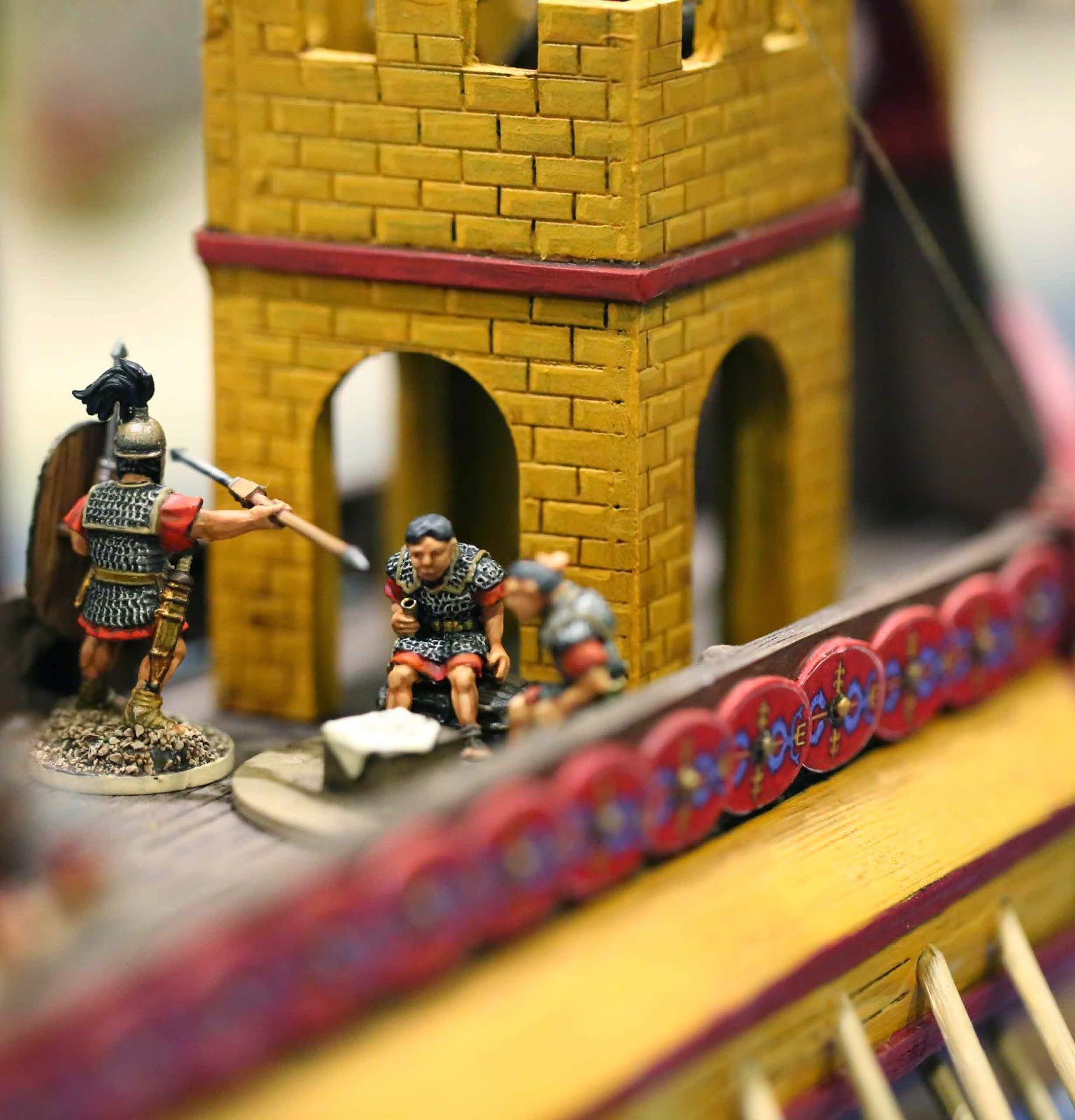 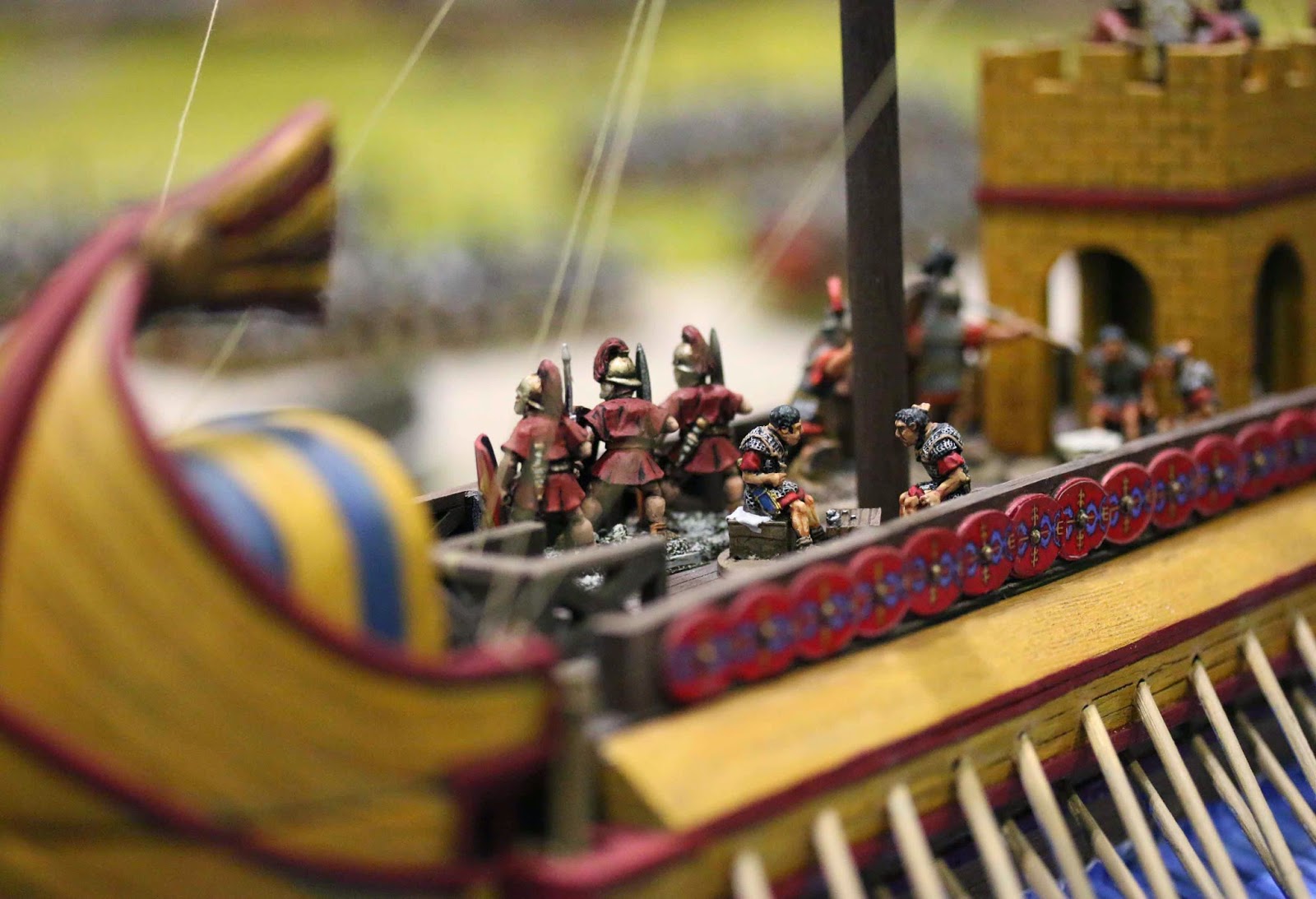 Above, a lovely shot by Elaine Daniels, of Mark Backhouse's galley, and below of Caesar's "secret weapon." 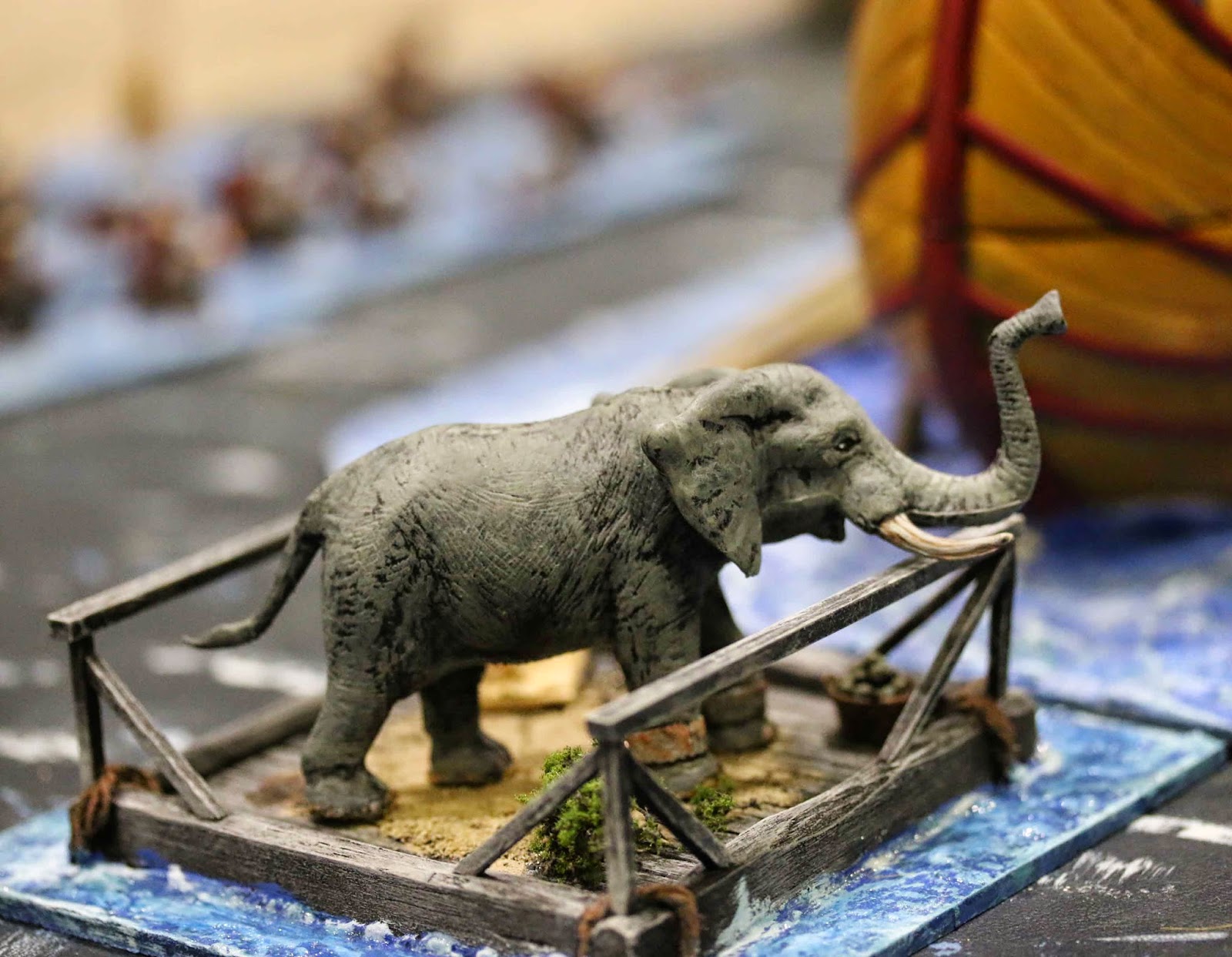 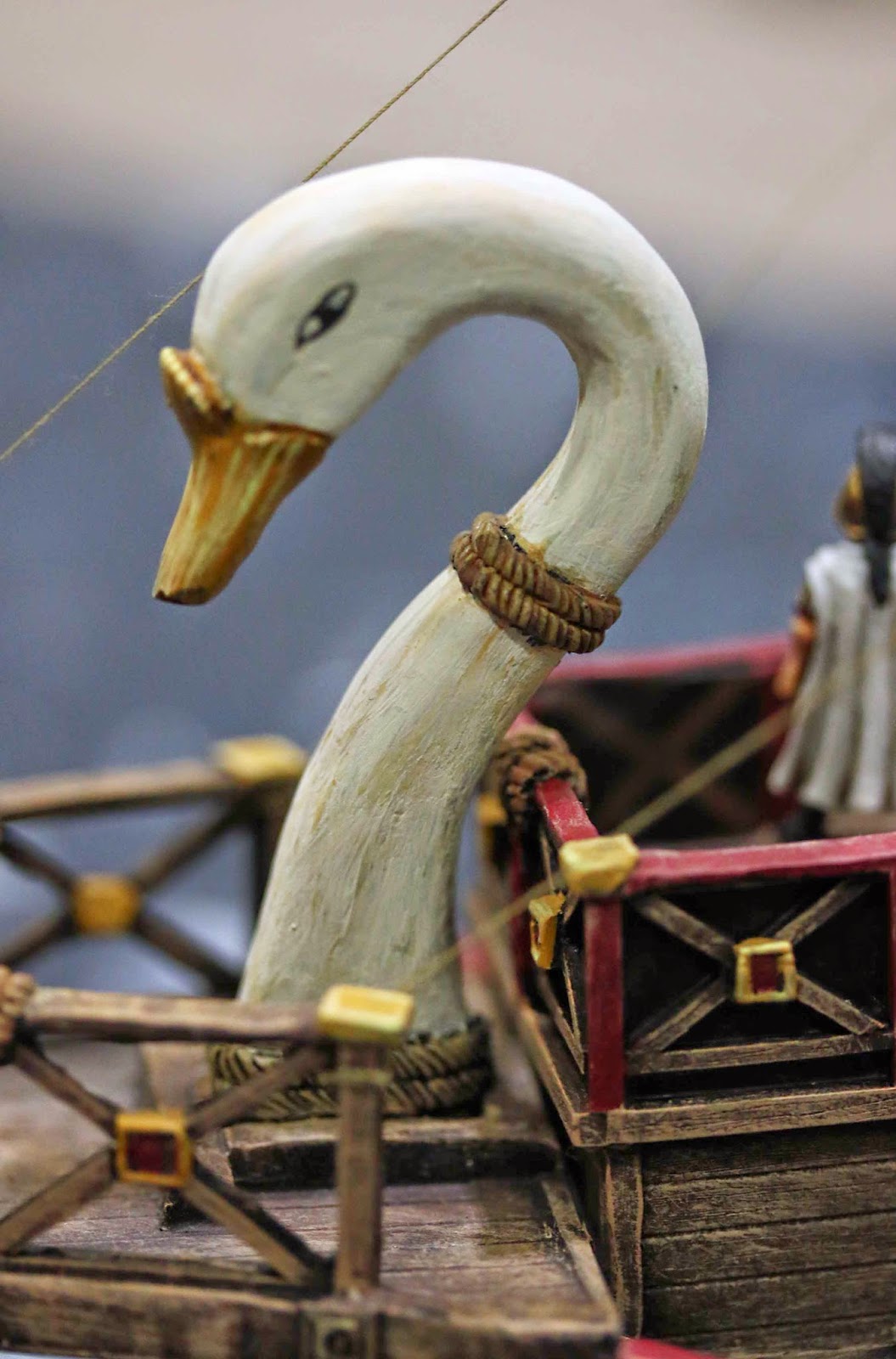 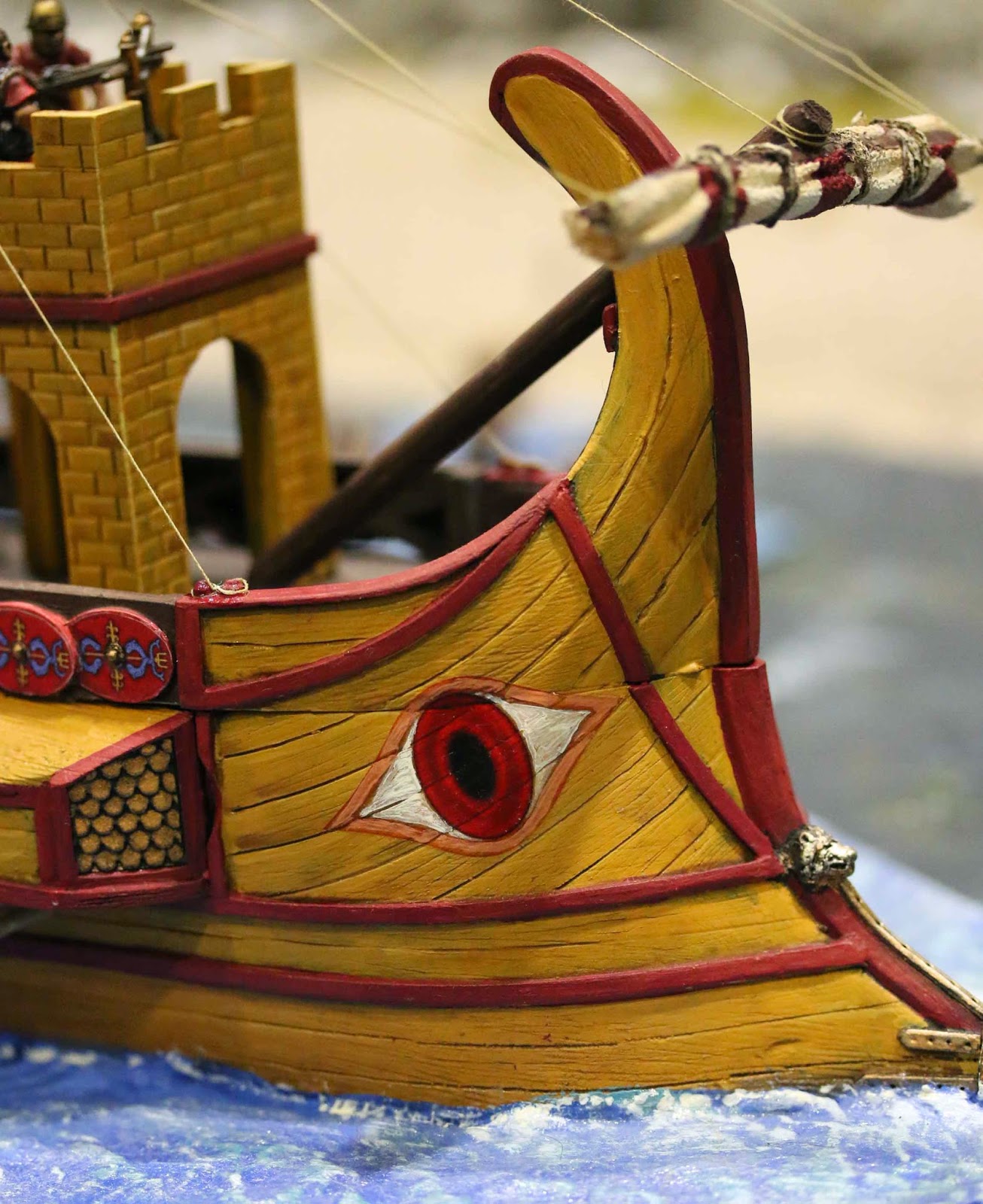 ...and the bow of his galley.  A lovely colour, that wood. 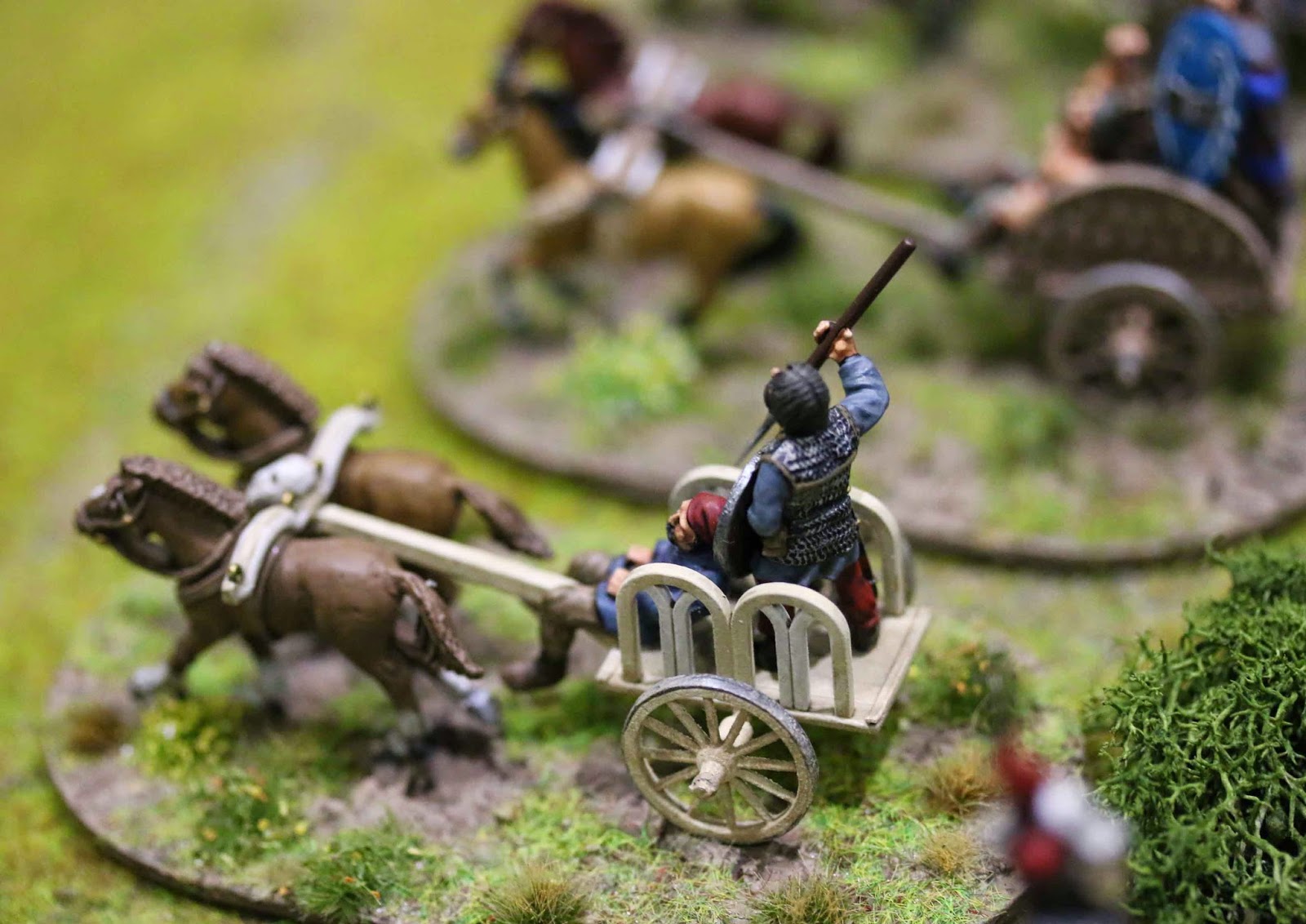 Finally, a rare shot of my celtic chariots.

Thanks very much to Stephen, Alan and Elaine.  If anyone else has photos, I'd love to see them!
Posted by BigRedBat at 13:18 No comments:

Mate Ian and I set off for Salute at 7AM, and were in the hall soon after 8AM.  My new trolley-of-war, below, made getting the minis from the car park to the table, child's play; much easier than queuing to bring the car in.  It'll carry 4' boards, too. 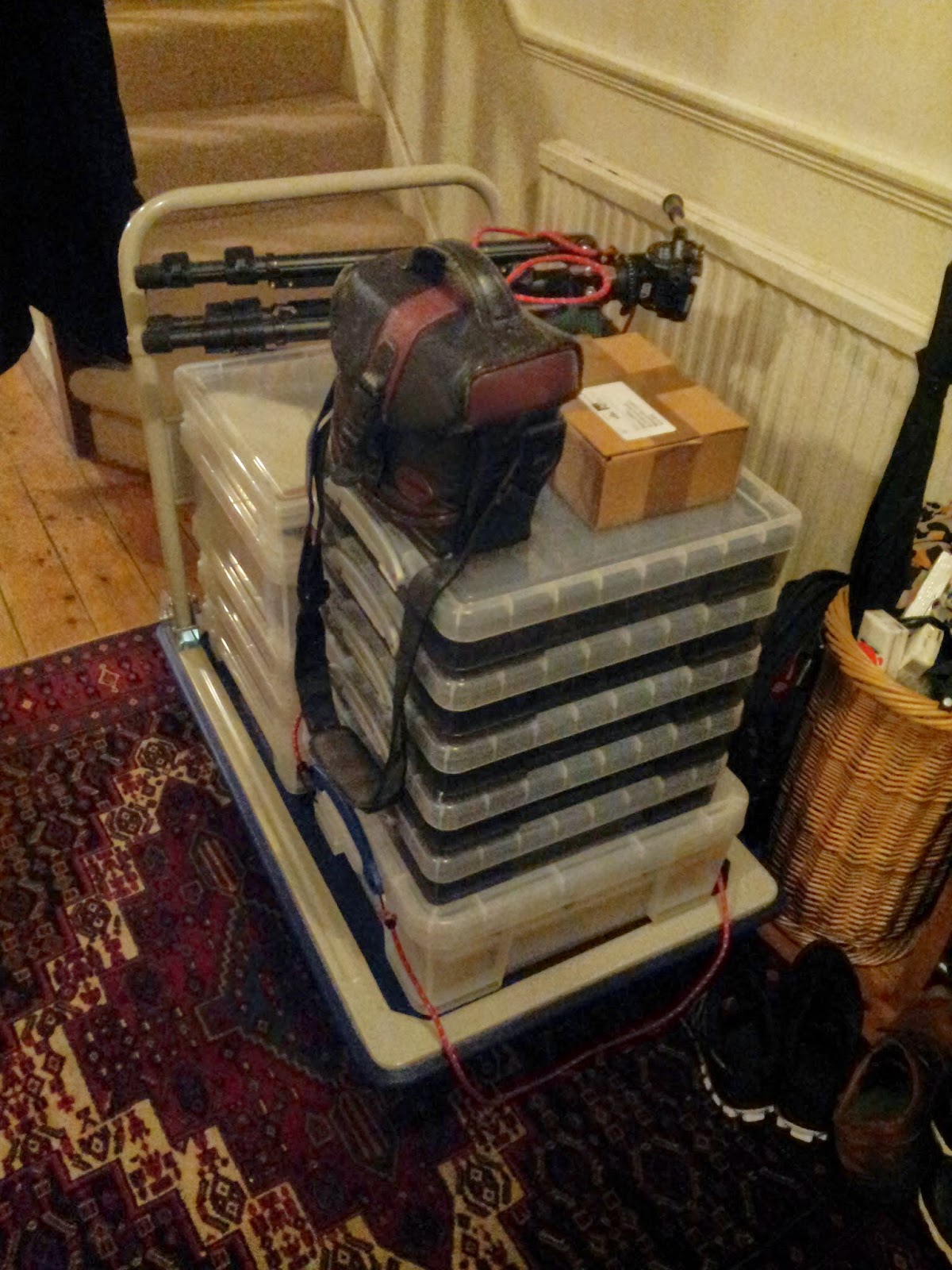 Unfortunately, despite having it on the trolley, I failed to put the camera in the car, so the only pictures I have are of Mark's elephant, and Guy's cliffs.  If anyone has decent photos of the game (the lighting was very challenging) I'd be delighted to see some. 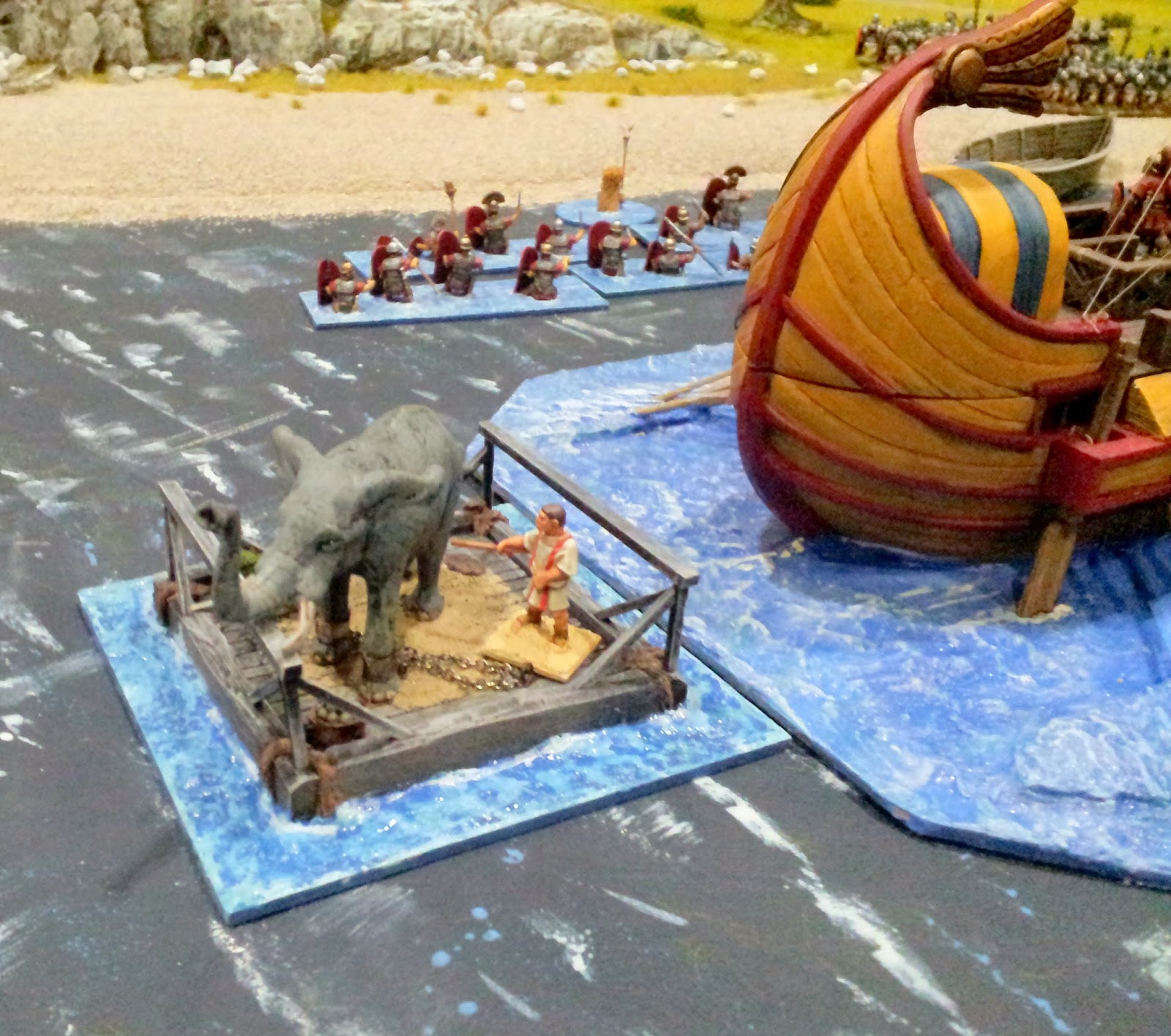 The game set up was very straightforward; Guy Bowers and his Brixham Berzerk mates made some great terrain (cliffs shown, below). Mark Backhouse produced some lovely ships and Frontinus' elephant, and Legatus Hedlius a splendid trireme. Jay brought his warband along, but unfortunately it (and around a third of my chariots) weren't required; I intend to put this right at the earliest opportunity, by running a big game here in the BigRedBatCave. 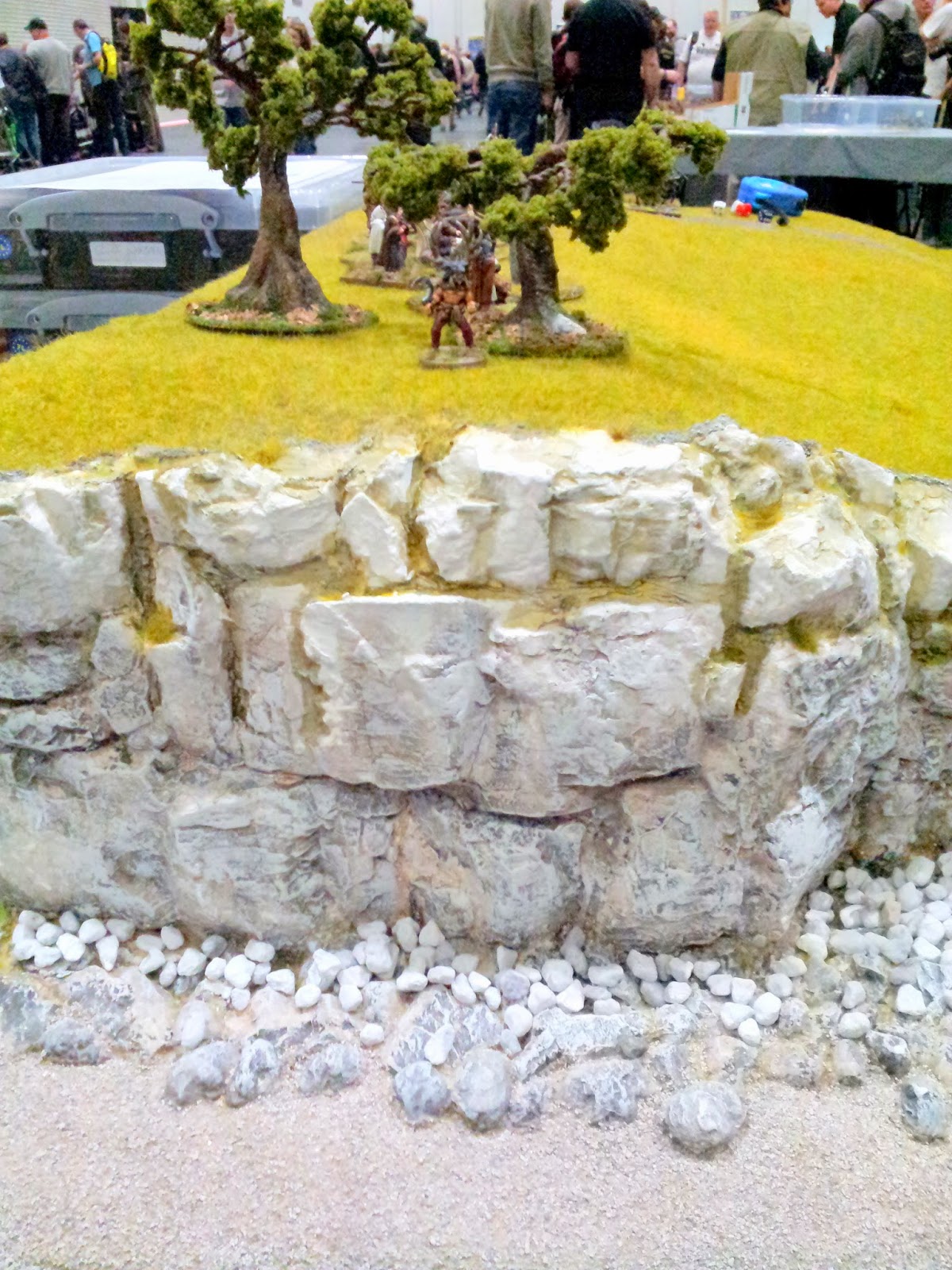 The game was run three times by the Berzerks, and by Mark, and was very well received by the two dozen-odd players. I believe the Romans won twice and the Britons defeated them once.  Huge thanks to all who contributed!

My favourite game was James Morris and friends' Keren, which is described on Scriv's blog. Jaw dropping. I've not heard that it won anything; if not, the judges must have been blind!

At Salute I was delighted to meet lots of people who follow the blog including fellow bloggers, old friends, manufacturers, publishers and many gaming enthusiasts.

I have read several pieces complaining that the Salute show, in its vast hangar, is crowded, smelly, hard on the feet and somewhat characterless, and that the goods on sale could be more easily purchased by post. In my opinion all of these are true to a lesser or greater extent. For me, though,  the most important reason for attending a show is to meet people and there are better opportunities to meet more people at Salute, than at any other show I attend in the gaming year, so it remains an absolute must!
Posted by BigRedBat at 11:05 No comments: 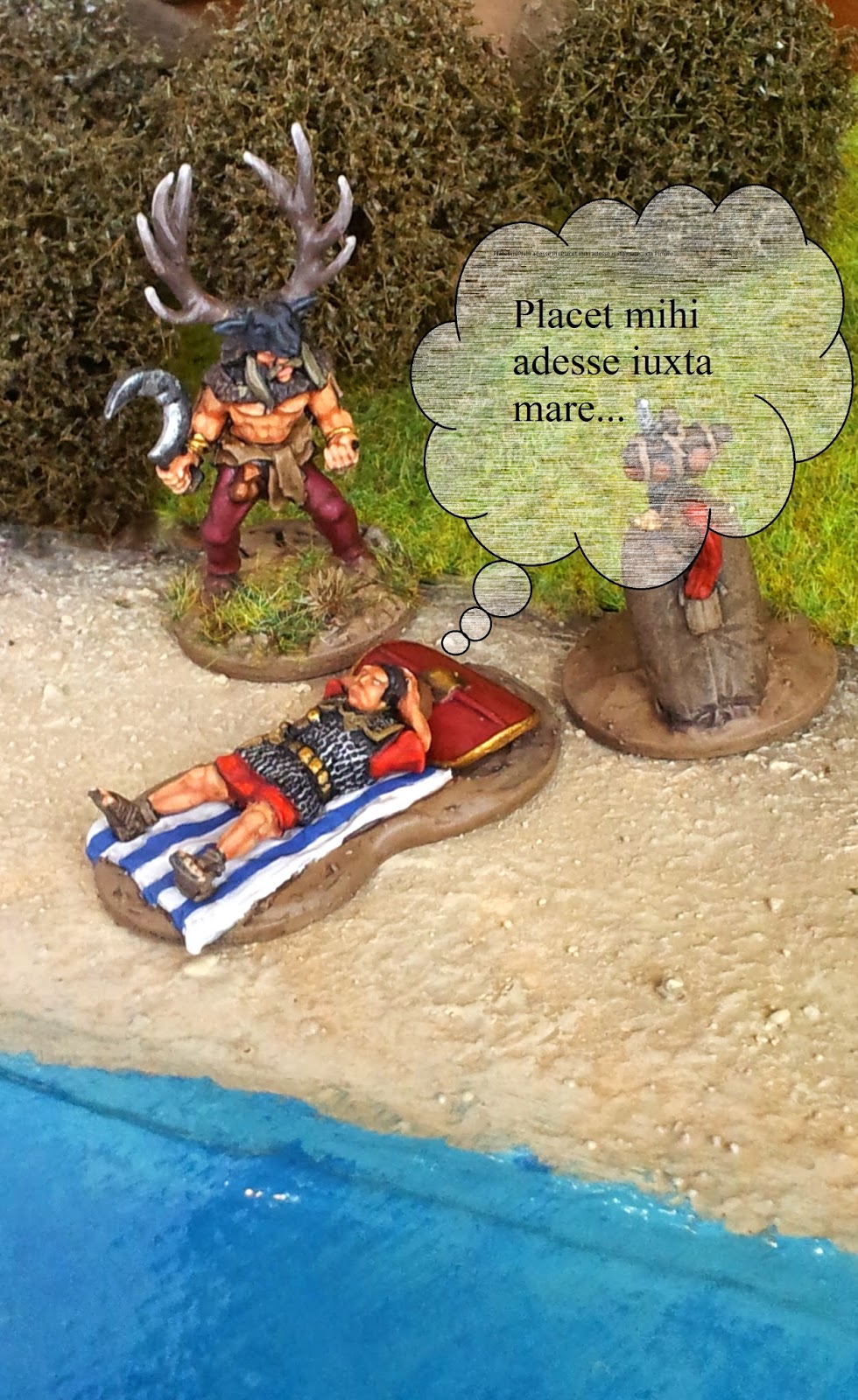 This afternoon I shall spend busily packing up my contribution to our C-Day game, Caesar's Invasion of Britain, 55BC, at Salute tomorrow. We are at stand GE02, inside the entrance and left a bit. I do hope to see you there!  You will know me by my T-shirt.

Posted by BigRedBat at 14:49 No comments: 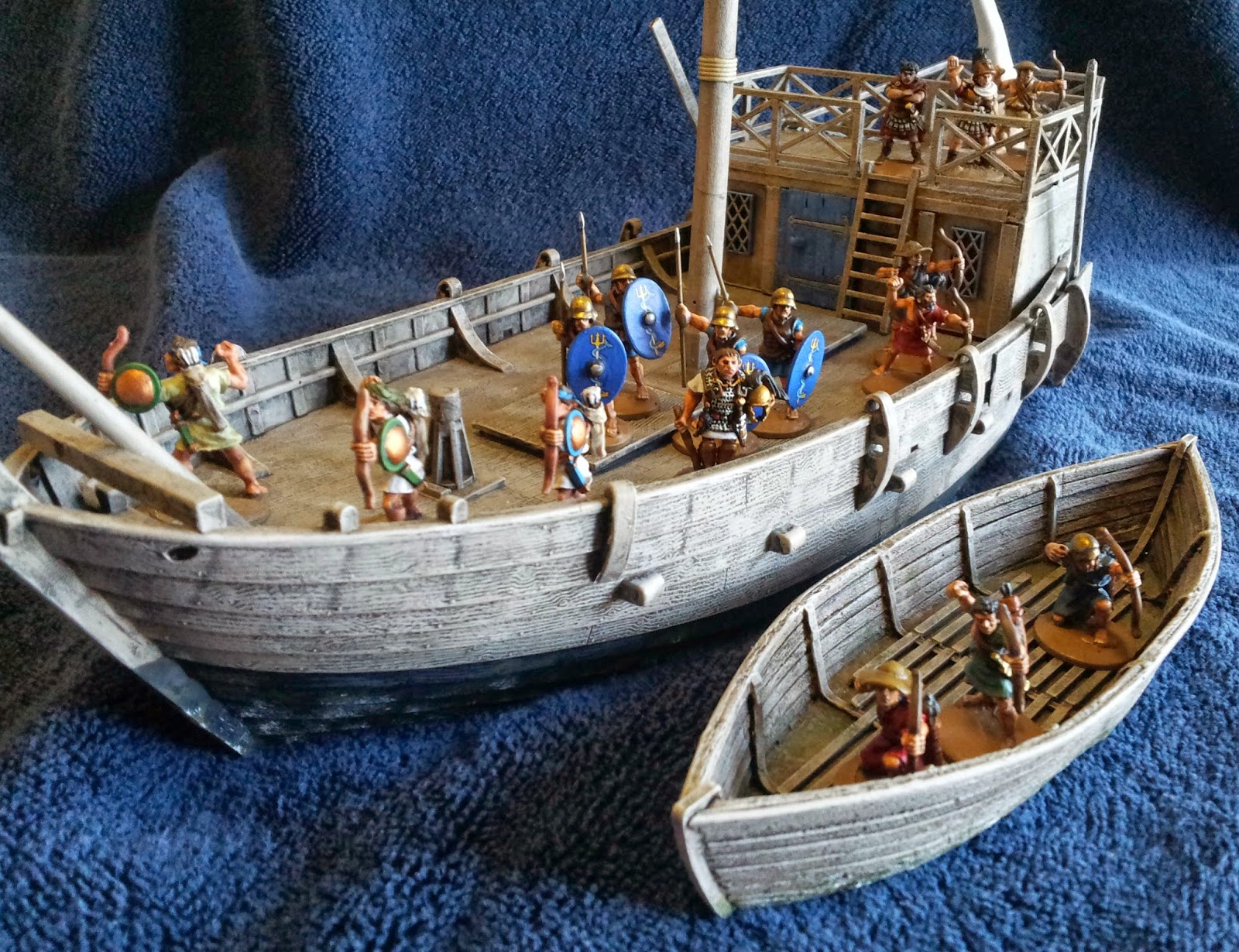 Here's a snap of my swan-necked trade ship, the "Vesta", and one of the four "landing barges" I've painted for the Salute game.  She is a big girl!  These are just quick snaps on my camera phone, I'll take proper pics, later on. 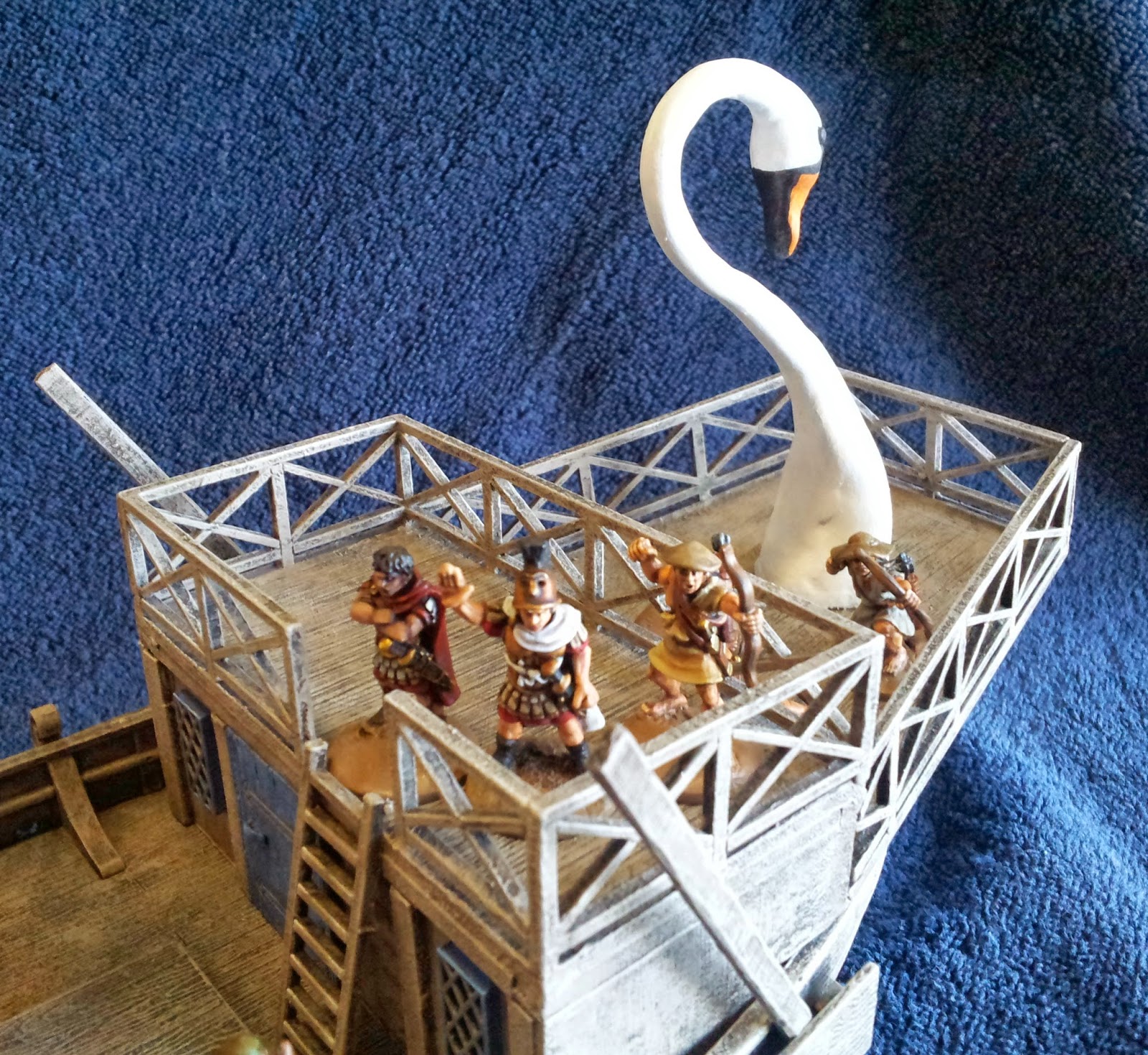 The model was laboriously converted from a plastic kogge.  I'm delighted with the railings; which the chaps at 4Ground very kindly produced as a special order.

Do come and see the "Vesta", and the rest of the Roman navy (plus me in my new Bigredbat t-shirt, and the fine chaps at WS&S) at Salute on Saturday; stand GE02, just to the left as you come in the entrance.
Posted by BigRedBat at 17:28 No comments:

Day of the drybrush 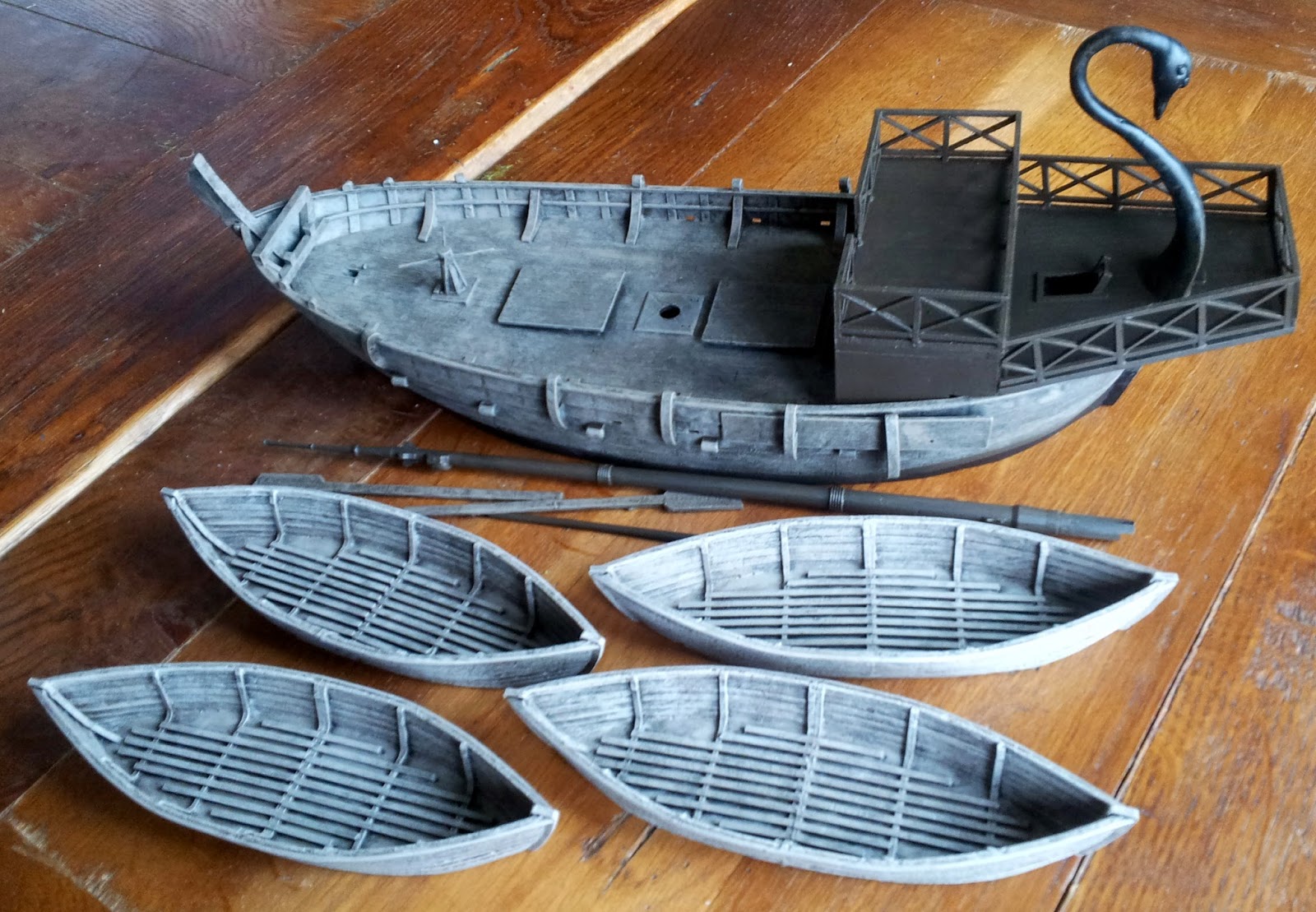 Today I shall mostly be dry-brushing ships in a grey-brown.
Posted by BigRedBat at 13:09 No comments: 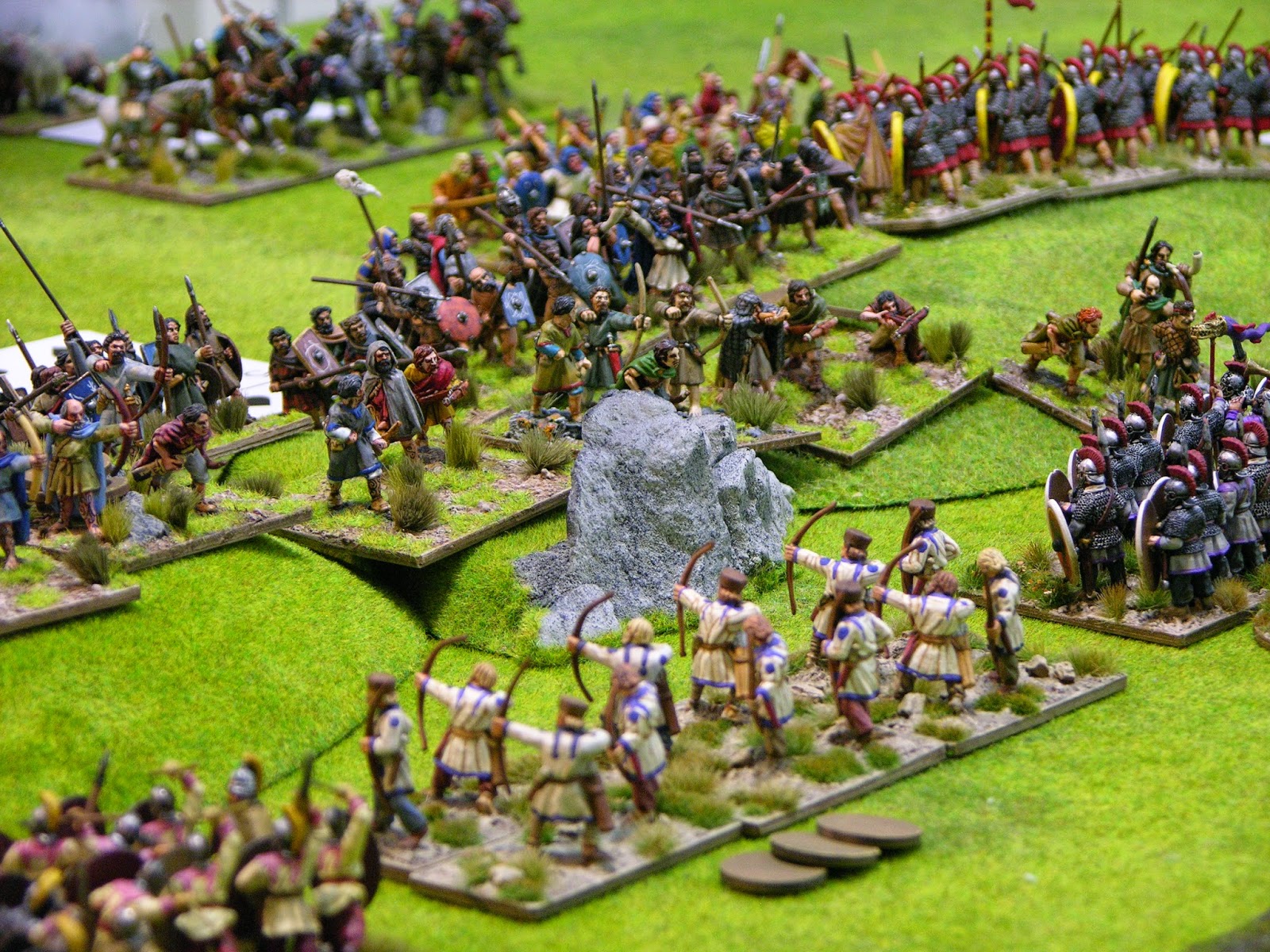 I have written a set of ancient wargaming rules, called “To the Strongest!”, which I use for all of the regular weekly games I play with mates, and to run the big games I run at shows.  I am looking for some remote play testers to read and play them and give me some feedback.

The rules have been designed to give novices an easy entertaining introduction to ancient wargaming, whilst as the same time providing seasoned gamers with a challenging battle that can comfortably be won or lost within an evening.

They are unusual in that no dice, at all, are used.  Instead, an innovative (and fun) mechanic uses playing cards to activate units, which can potentially move or fight multiple times during a turn.  A simple square grid enables the game to move at a cracking pace, and also means that battles can be fought with figures based for any system (WAB, WRG or Impetus).

If you have a couple of ancient armies (small or medium-sized ones will be fine) and a mate or two, and have the time to have a crack at them and give me some feedback, please email me at the email address on the header of this blog.  At this stage I want to send out around half-a-dozen sets, so that I can cope with the feedback.

Cheers, Simon
Posted by BigRedBat at 10:54 No comments:

Here are some shots of last night's game; a baptism of fire for my the new chariots. Here's a view along the table; soon after landing in Britain, a small force of legionaries (near end of table) have been cut off by Britons (centre); Caesar and the veteran Xth legion  are marching to their assistance (rear). 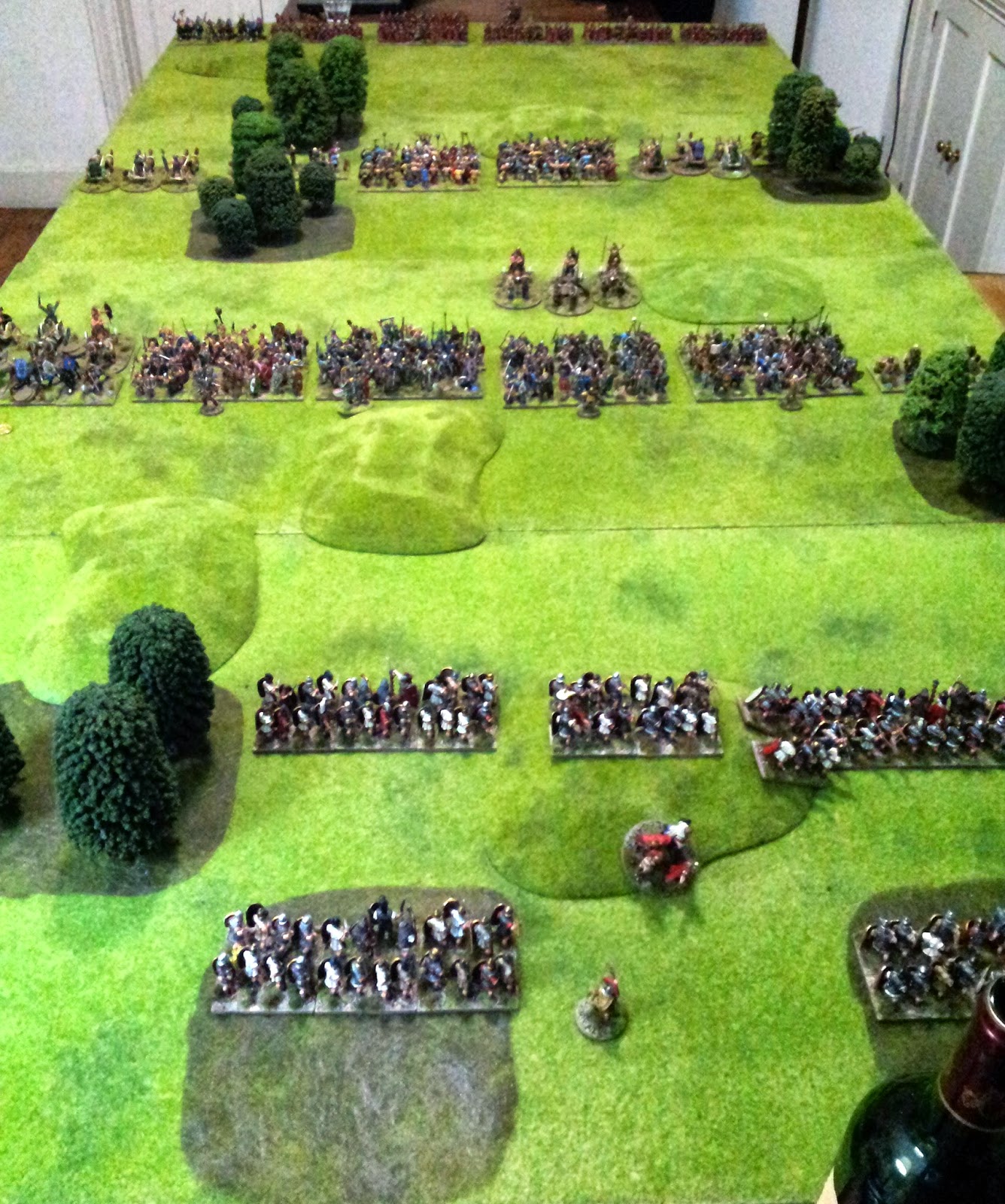 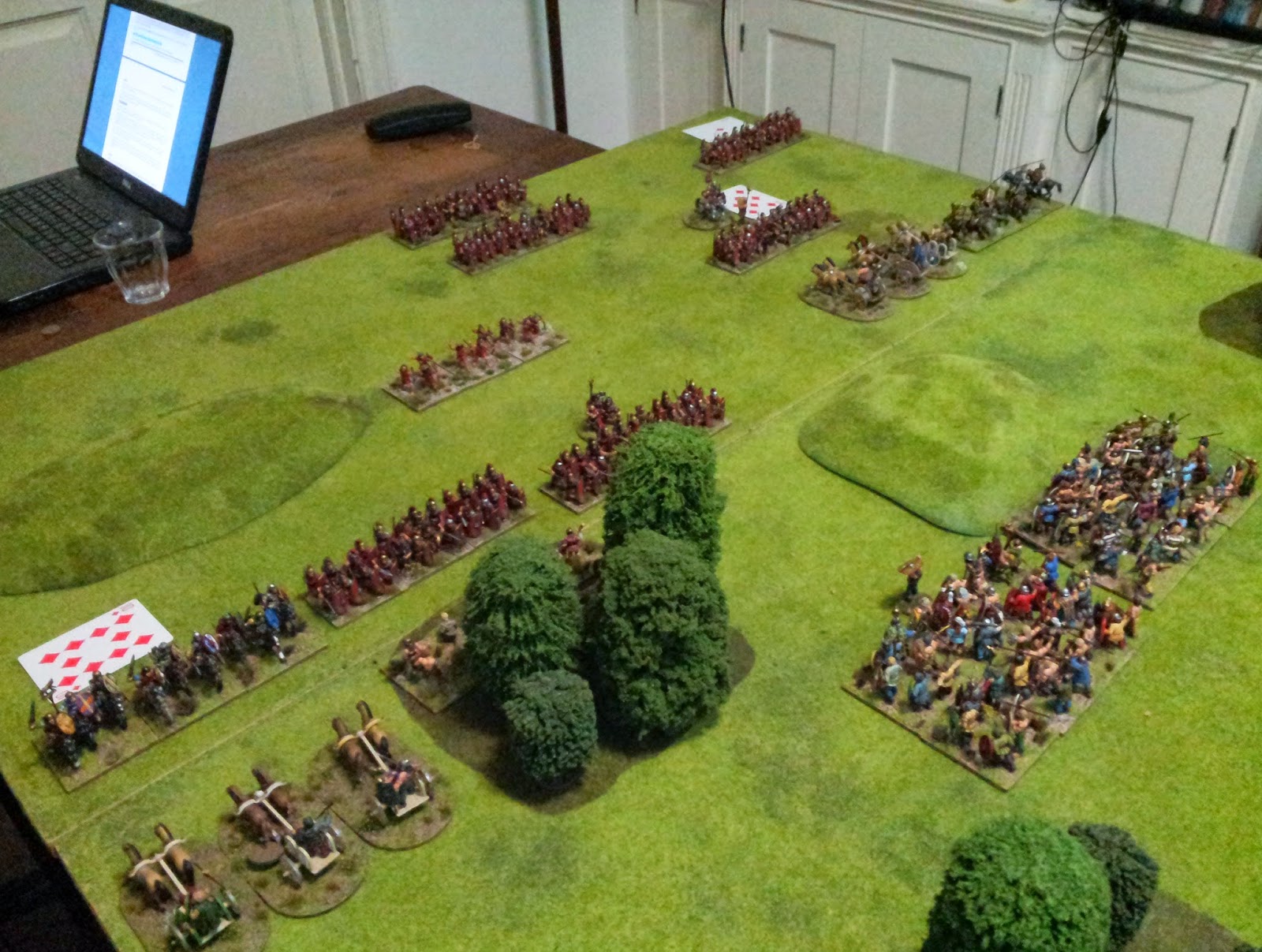 The Britons, however (below), were able to push quickly forward. A warband burst through the thin Roman line, swept into the camp, and then turned onto the rear of the Roman line; the chariots on the hill then captured the Roman baggage, and the battle was won (and lost). 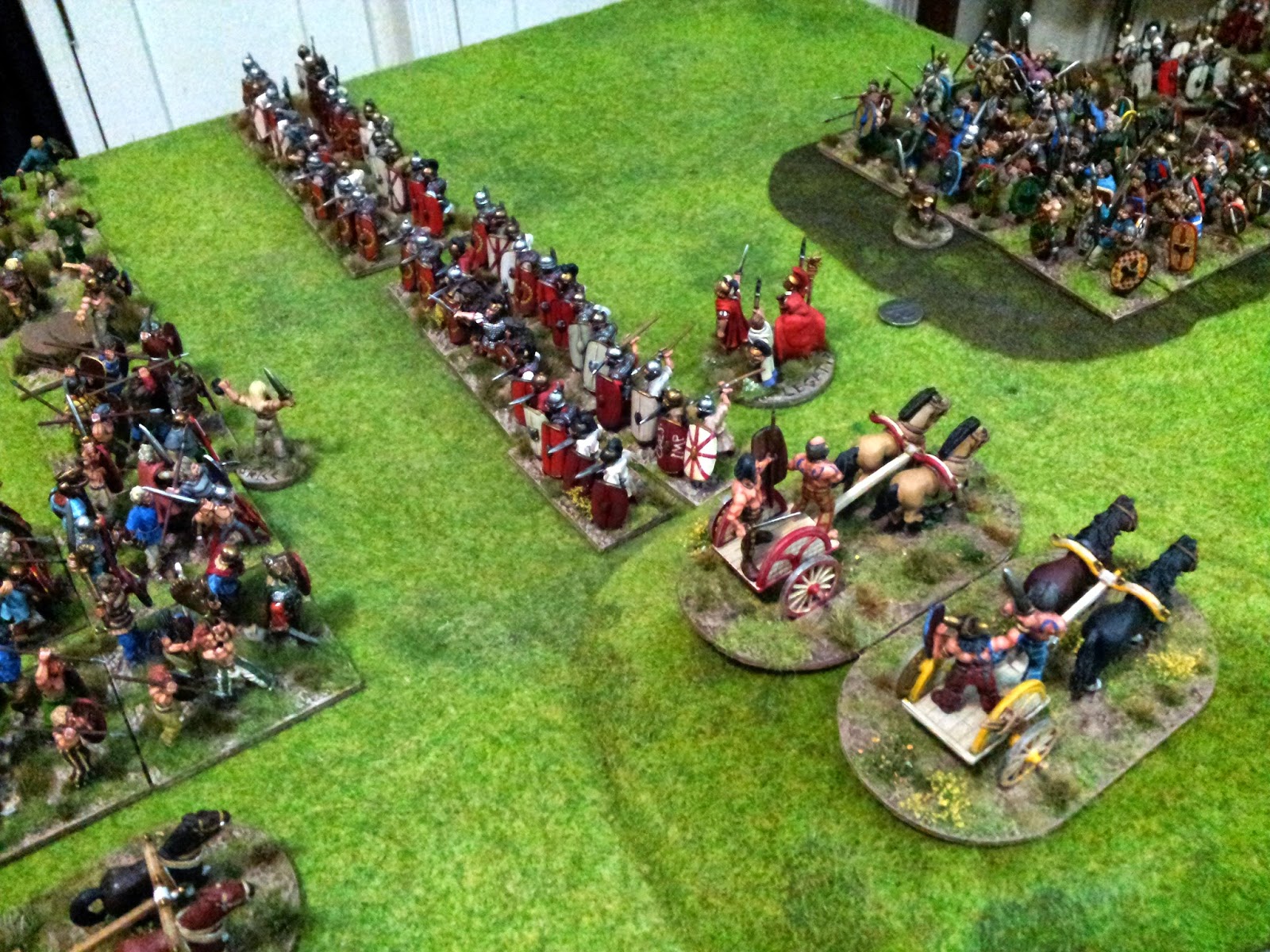 Below, I'm slowly migrating from using the 4L Really Useful Boxes, to the low 7L size.  These are 30cm wide and take 5 elements across, rather than three.  A more efficient use of storage space!  Here are most of the new chariots, packed for Salute. 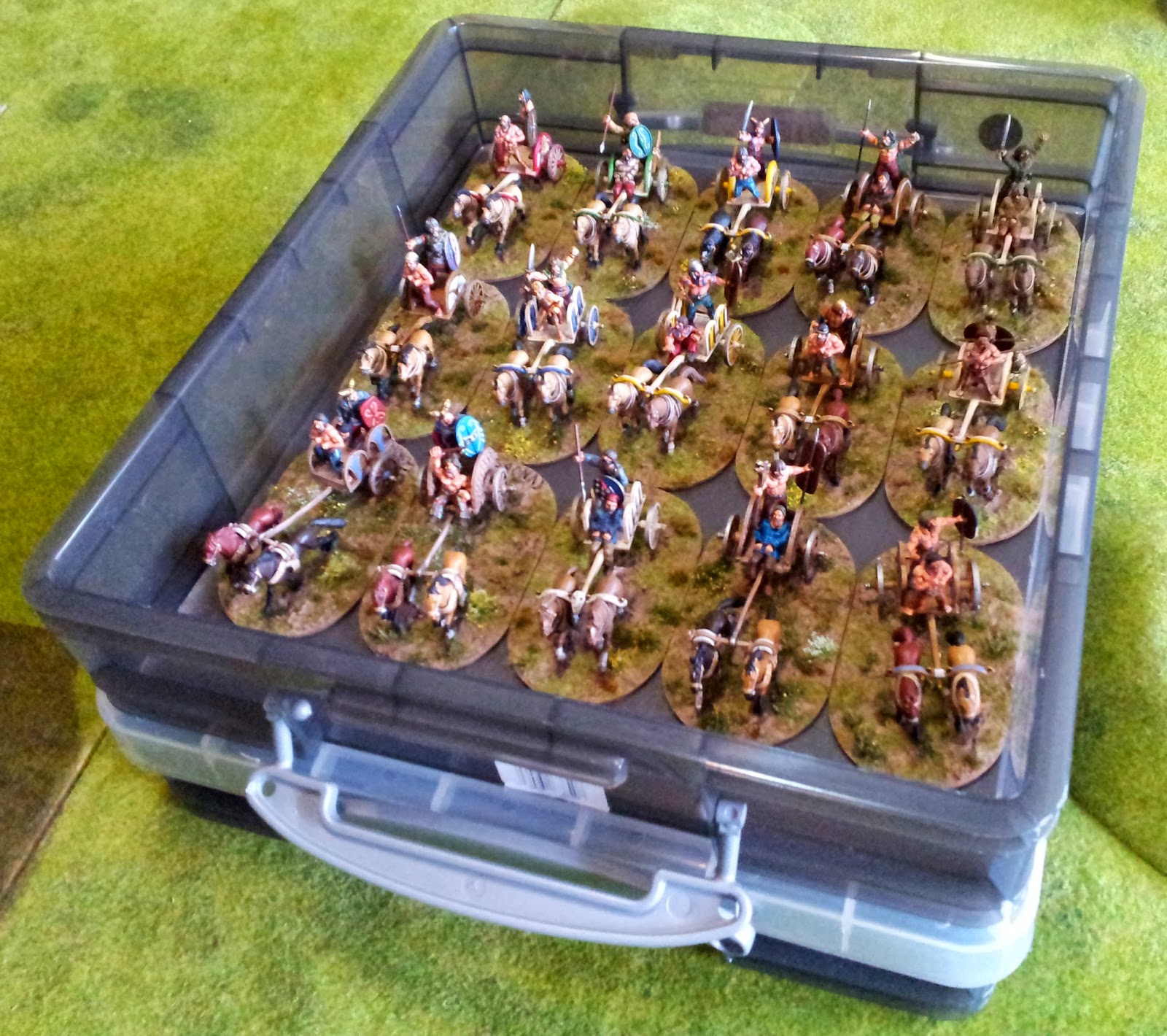 Posted by BigRedBat at 12:52 No comments: 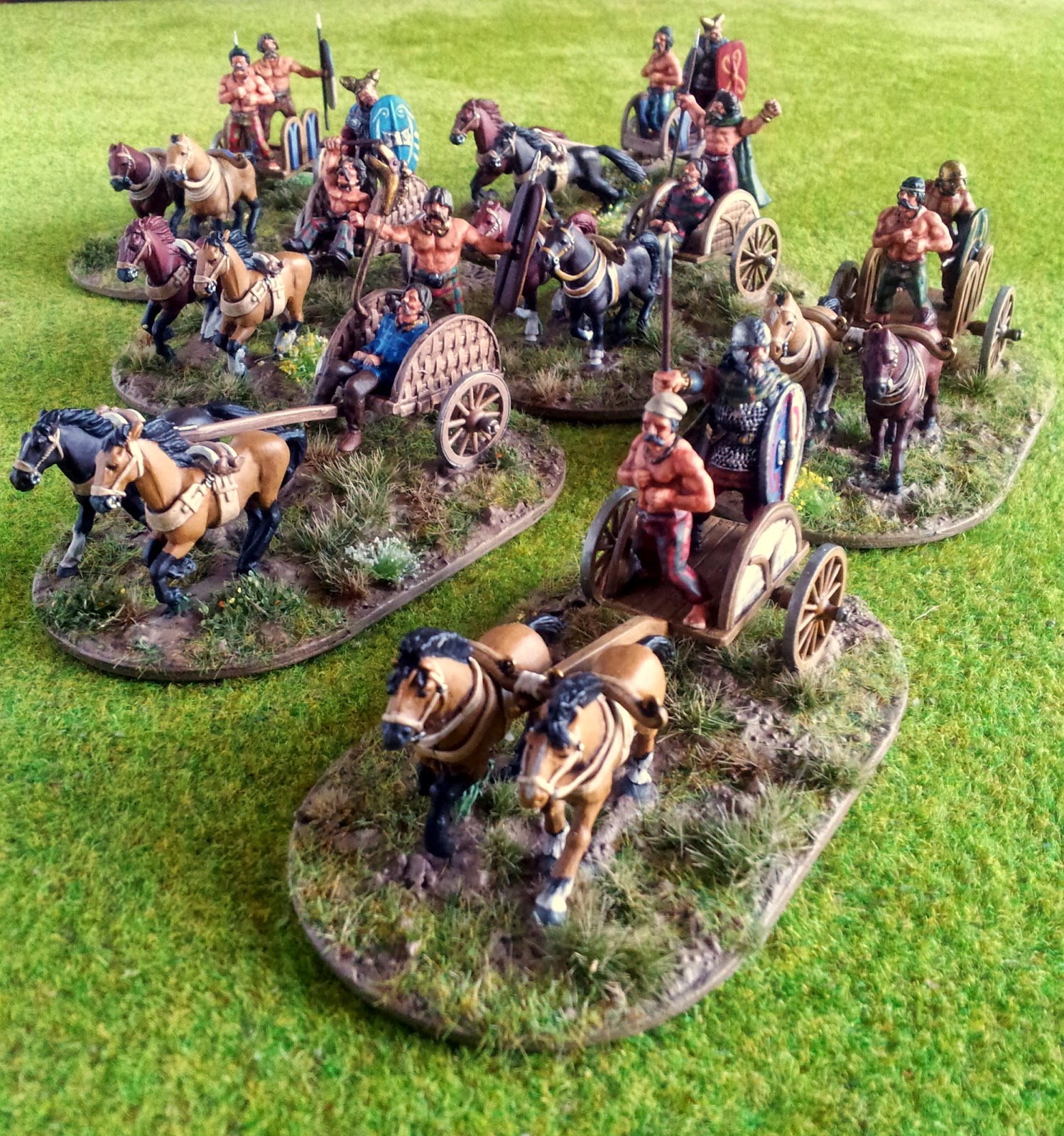 Most of the second wave of chariots are ready, for the looming game at Salute.  There are still a couple more on the painting tray, awaiting crew, which will bring me up to a total of 18 vehicles.  I hope to add a smaller third wave, later this year.

These models are a mix of Warlord and Wargames Factory vehicles, mostly with Relic wheels and with Foundry and Newline ponies and various crew conversions.   The crew were painted by Nick Speller.
Posted by BigRedBat at 12:43 No comments: