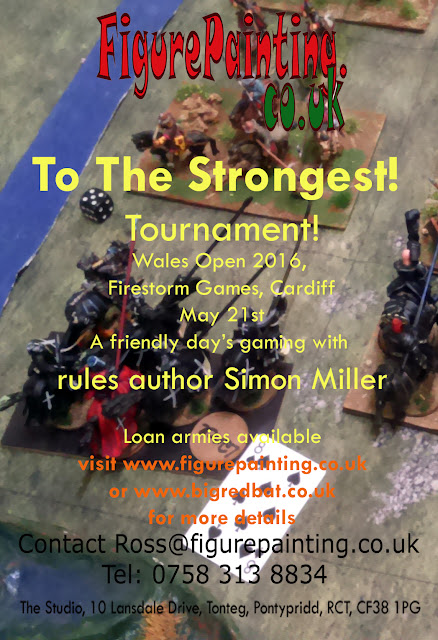 Mate Ross Broadstock is organising a To the Strongest Tournament in Cardiff on May 21st. I will coming and hopefully even playing!

The scale is 28mm- if you don't have an army Ross, friends and I will be able to loan you one. Because no re-basing is required, it is a great opportunity to dust off that WAB or DBx army that hasn't seen action for a year or two. I will assist with writing your army list. There will be a trophy and prizes.

Please contact Ross (at) figurepainting dot co dot uk to register - I look forward to seeing some of you in Cardiff!
Posted by BigRedBat at 10:18 No comments:

With lots of help from mate Millsy I've published a rather spiffing extended Polybian Roman army list for To the Strongest!  This has a lot of pictures of the minis in my collection within it, many of them Aventine Miniatures painted by Redzed.  You can download it for free from here.
Posted by BigRedBat at 00:36 No comments: 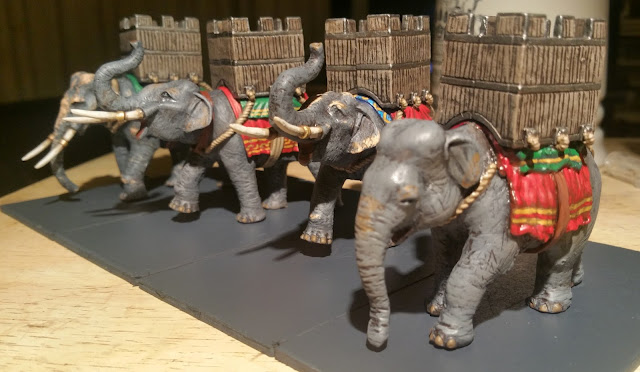 I'm currently working on elephants for the Raphia game. These lovely Aventines were painted by mate Shaun McTague (with lovely decorated cloths) but I am adding detailing, notably giving a couple the skin pigment issues that one sometimes encounters on Indian elephants (below). 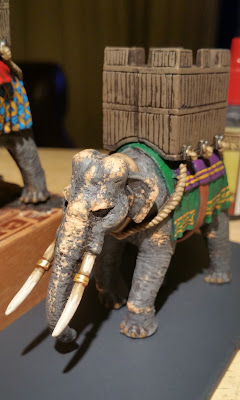 Unfortunately I've not been able to get a table at Salute this year; apparently there isn't enough space for all the proposed games. The battle will therefore only be fought at the Wargames Holiday Centre near Basingstoke on the weekend after Salute (April 22nd -24th)- Mark still has a few spaces. I will, of course, take lots of photos for those who can't be there!
Posted by BigRedBat at 10:08 No comments:


Regular readers may recall that I made a great number of hills last week for the Chalgrove event. I designed these to complement the Deep-Cut "plains"battle mat, which is a somewhat darker green than the traditional flocks used on many a wargames table. The below hills are 16cm diameter; there are also oval hills some 31cm long. 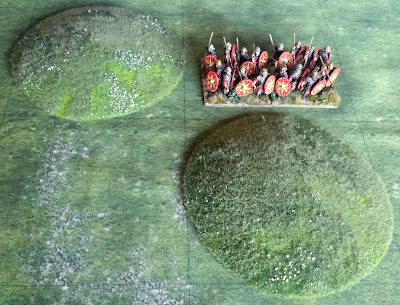 I've used three different coloured flocks and two different grits to give them a very naturalistic look. One of the hills can be seen in action (photographed at SELWG in natural daylight) below. If you'd like one, they can now be found in the bigredbatshop! 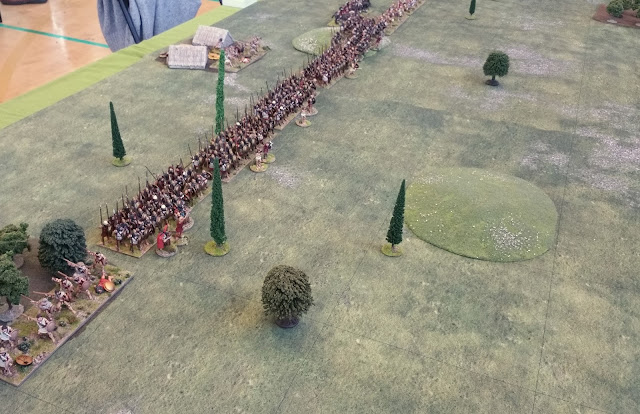 Posted by BigRedBat at 12:00 No comments:

The 2016 To the Strongest! World Championship at Chalgrove

On Saturday I travelled up to Chalgrove for the second "To the Strongest!" worlds, where I enjoyed a fine day's gaming with a great bunch of chaps, most of whom are in the photo below. 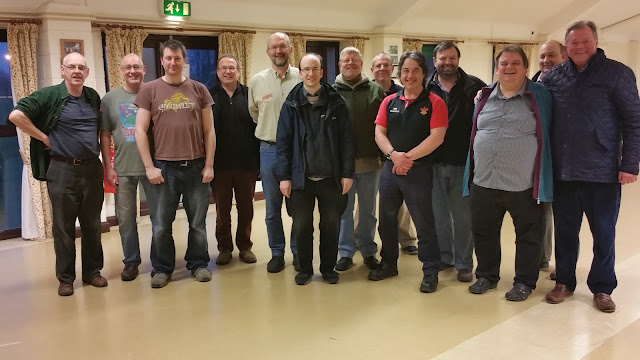 The event was organised by Steve Dover (third from left).  This year it became a proper World championship with Alex Myers (fifth from left) travelling from Ghent to participate, not to mention Ross from Wales (fifth from right).

I took all too few photos of the games, alas - I was too busy answering questions and enjoying watching the games develop. 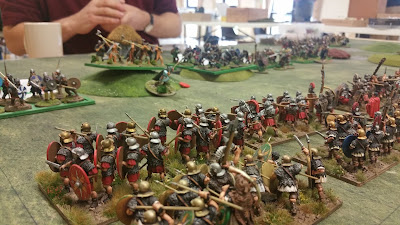 Above, my EIRs under Neil Shuck's command fight Franks or Vikings. Below Alex Myer's Alan camp was an almost unassailable fortress; uphill and packed with mobs. 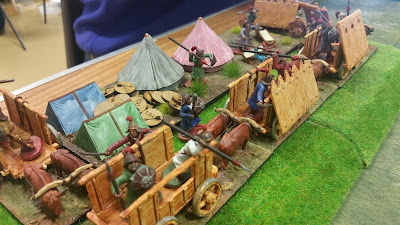 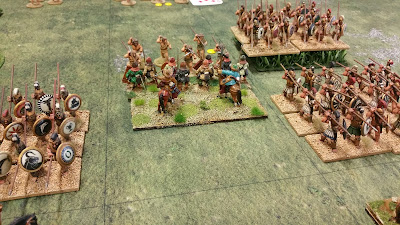 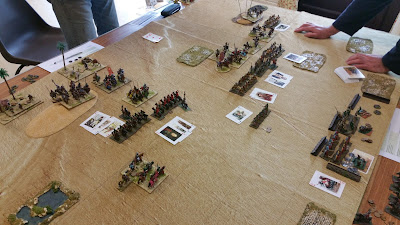 And finally here's another shot of Nick Simmerson's phalanx. 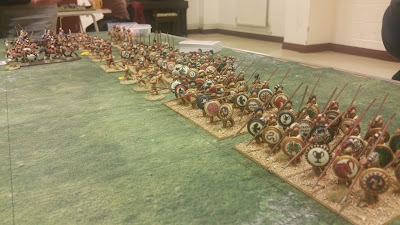 It was a super day, with 21 very good-natured games played. In the end Simon Purchon won a decisive overall victory with his Sassanids who combined fire-power with manoeuvre and impact. Colin Hoare's Marian Romans marched into second place and Peter Ryding's Mongols whipped their subjects into third.

Here's a link to Neil Shuck's post on the event.

Thanks again to Steve Dover and the South Oxfordshire Generals for organising and hosting the event, and thanks to everyone who participated!
Posted by BigRedBat at 17:44 No comments:

The hills have I- part 3 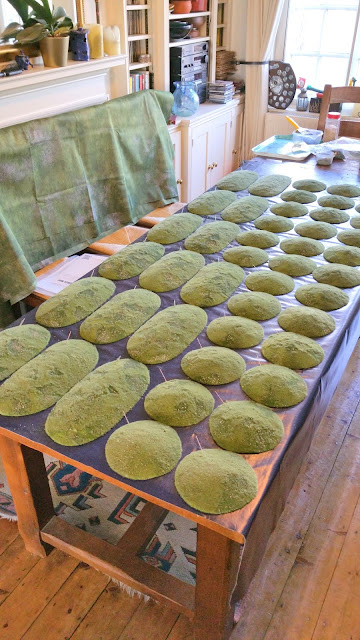 The hills are pretty much finished- once dry I'll remove the surplus flock and the gravel and dark green layers below will show through. You may be able to see that the colour is a good match for the Deep-Cut plains mats (in the background). I'm taking no fewer than nine mats and forty-five hills to the Worlds at Chalgrove on Saturday!
Posted by BigRedBat at 14:27 No comments: 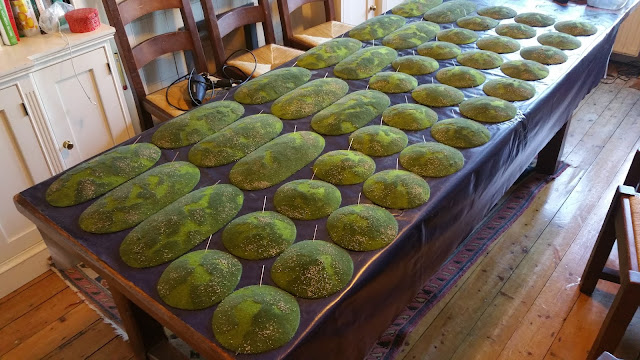 Five hours of flocking has got me to this stage; all the hills now have a 50% covering of dark green flock and ballast.  The next stage is, once they are dry, to remove surplus material, and then I'll apply a medium green flock, perhaps tonight, perhaps tomorrow.
Posted by BigRedBat at 16:09 No comments:

The hills have I 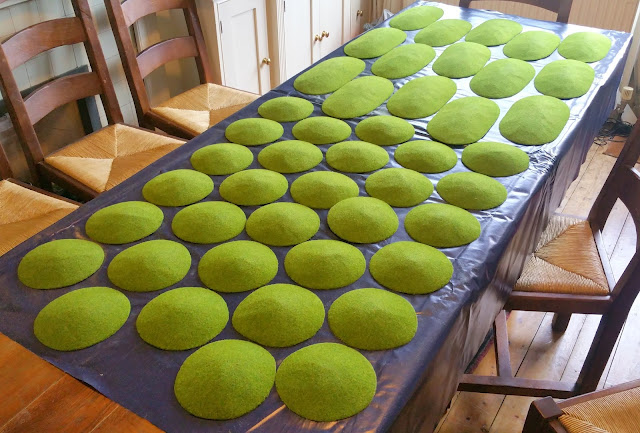 Today I shall mostly be flocking hills for the To the Strongest! World Championships at Chagrove in Oxfordshire on Saturday. By the time I have finished these should match the Deep-Cut plains mats that we will mostly be using.

If you are in the area and fancy dropping in for a look or to join in, please drop me a line!
Posted by BigRedBat at 10:49 No comments:

These are some Seleucid line cavalry that I bought from mate Craig Davey for my planned Raphia game at the Wargames Holiday Centre on the weekend 22nd - 24th April. Unfortunately they were very roughly handled during their long march southwards (from Leeds) but they are now, happily, restored to peak military efficiency! Pics are clickable.

The miniatures are all Aventines and very nice they are, too. Happily Craig's basing style works very well with the Deep-Cut Mats. 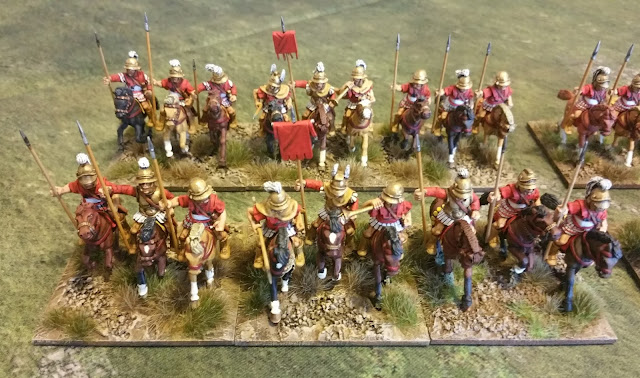 I have been very busy writing, shipping, basing and painting recently which has cut rather into my blogging time. Have no fear; normal service shall be resumed shortly!
Posted by BigRedBat at 15:36 No comments: