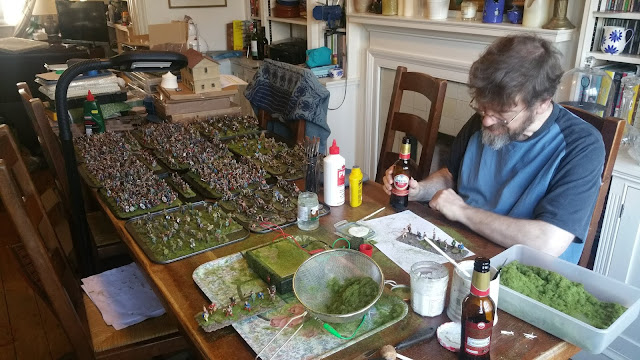 Day 4: The entire dining room is covered in a thin layer of flock. Beer in hand, Ian is contemplated the last remaining unflocked unit of slingers.  After this there are the 18 chariots and the laager to reflock, and then about 2000 tufts to apply. I am 92% there according to my spreadsheet!
Posted by BigRedBat at 16:38 9 comments:

Email ThisBlogThis!Share to TwitterShare to FacebookShare to Pinterest
Labels: Flocking 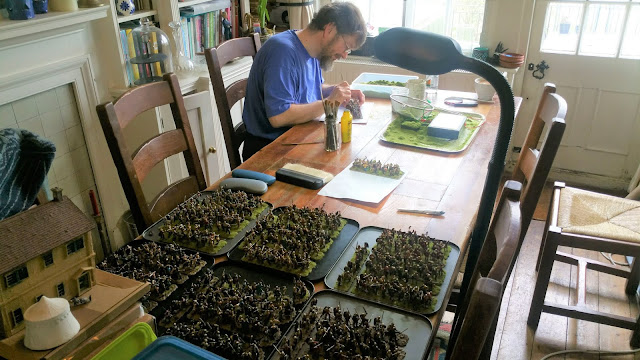 Chum Ian on Day 2 of the annual pre-Salute flockathon.  That's around half the Britons.
Posted by BigRedBat at 15:05 8 comments:

I was doing a photo shoot yesterday for some new Flatpack Terrain river and track products that I'm selling, and found I needed some marching figures. In my loft I found these; they've not seen the light of day in five years or more (photo is clickable). My Napoleonic collection remains somewhat "in the closet", but I couldn't resist setting them out for a photo, especially as I'm currently working on a related project (below) with chums David Imrie and Lionel Bechara. 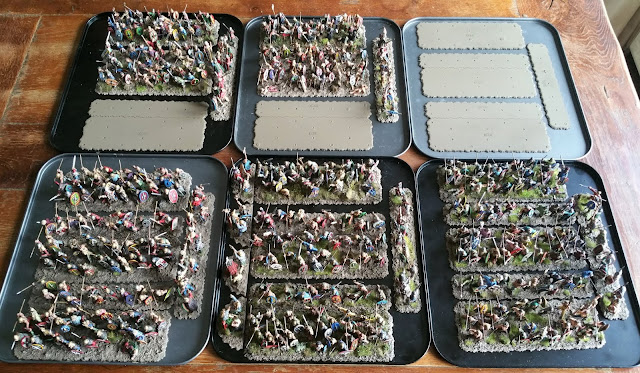 I've been posting less, of late, on account of all the basing I've been doing for my Mancetter 61CE Salute game.

Above are the warbands for the game. The sharp-eyed will observe that five bases are still "blank" - I have just completed the 175 required minis but not yet based them. 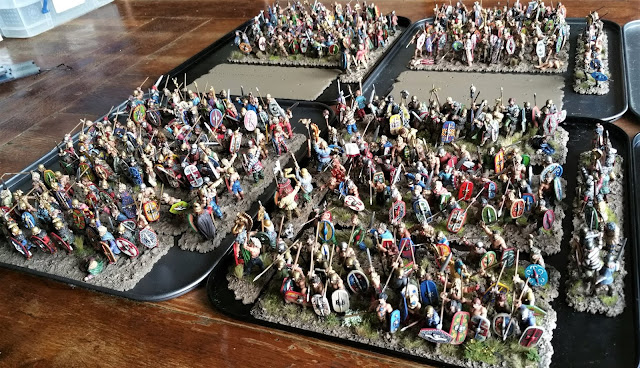 Here's a closeup. Each warband consists of around 36 minis (so there will be 650 in all). The minis are a mixture of all the larger Celtic ranges, particularly Renegade, Black Tree, A&A and Foundry. Many are conversions. Most were painted by Shaun McTague or Nick Speller, with some by Shaun Watson. I did some snagging and many of the shields. The bases are grouted and primed and, in a few cases, partially flocked. There's a heck of a lot of flocking to be done... 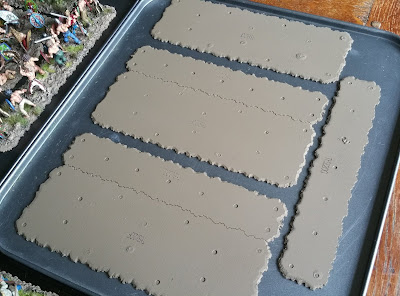 Here is a closeup of many of the blank bases. Each unit has two- a TtS!20F and a TtS!20G that fits across the back and can be angled or turned about to indicate disorder. You'll see I've chamferred the edges to give them a nice low profile, fitted magnets into the holes and primed them in an earth shade.

The slingers are mostly done, too, and you can see them here. The laager and the chariots are all complete. All in all, there should be around 900 Britons on the table, and perhaps 600 Romans. In the finest traditions of Salute, the glue will still be drying on the road to Excel!

If you are coming to Salute and would like to play in one of the two games (10AM and 2PM), please drop me an email at the address above left, and I will book you in. I also have a couple of free tickets that I can give to people familiar with TtS! who can play/help to run the games. I hope to see lots of you there! I won't be selling at Salute but if you'd like to buy anything from the BigRedBatshop now, and collect at Salute, that's fine- just let me know and I will refund your postage.
Posted by BigRedBat at 11:31 10 comments:

The 2019 To the Strongest Worlds! Part III

I thought people might enjoy some modest stats on the tournament!

I have a few observations:-


Scores on the Doors!
And finally, here are the top five armies- I think all five are "mixed":- 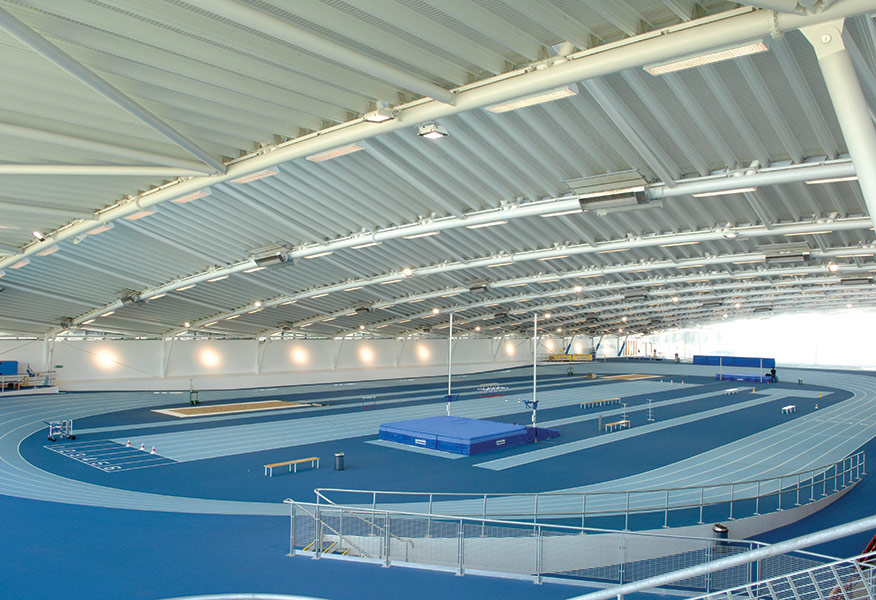 "Knight Fever" at the London Games Tourney
Should you wish to scratch your post-Chalgrove TtS! itch, or enter your first tournament, we are now taking bookings for a large Medieval-themed TtS! tournament as part of the huge London Games Tourney in Edmonton, London on Sunday 15th September. London GT is a huge event for the Warhammer 40K/LOTR crowd, with quite a sizeable historical contingent present, representing the various ancient rule sets.

Knight armies are cheap and easy to build in these days of Perry and Fireforge plastics! If you don't have a suitable Medieval army (one from any of the three Medieval books), I (or someone else) might be able to lend you one- I plan to base a couple or three up. I'm also writing additional lists, currently Later Polish and I plan to add Lithuanian, Hussite and Spanish and hopefully more in the next month or so.

The details can be found at Knight Fever Details. You can book your place at Knight Fever Bookings- I already have, it was really easy! Hope to see you there!
Posted by BigRedBat at 21:56 2 comments: