Here's chum Ian helping me to mark up cloths for the Roundway Down game with a very unusual 26cm grid, that is required because of the somewhat unusual configuration of the battlefield (7 boxes wide). This proved to be quite involved, since the cloths I had picked are from Geek Villain and use a fleece that is lovely but stretchy, being designed to go over hills. But Ian and I are grizzled veterans of marking up cloths with grids - heck, we've even done hexes! - so it wasn't unduly taxing.

The reason I like these GVs is because they are a great shade of green and there's a nice nap to the fleece. Unfortunately I had to use the last three I had in stock, so I can't sell you any, but I'll hopefully receive more in June, both gridded and un-gridded.

Bring on the Empty Horses 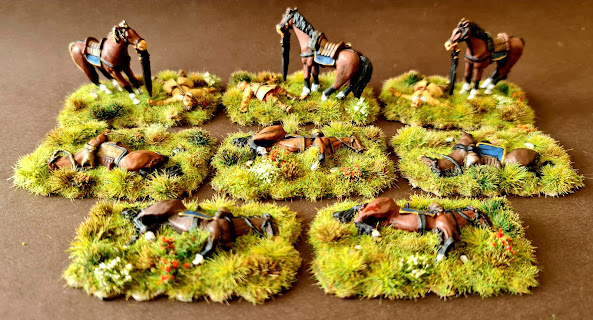 Above are the completed horse casualty markers for the Roundway Down game (click for a close-up), and below are the infantry casualty markers. The miniatures are a mix of Bicorne and some old Redoubts and a couple of Warlords The dead horses, above, I converted from a Bicorne horse and Bicorne very kindly then cast a bunch up for me (I've not seen them added in their shop). All the minis were painted by Shaun McTague or me, and chum Ian did the expert flocking, which I then tufted, dry-brushed and varnished. I added the flag for the wounded ensign; poignant, or what? 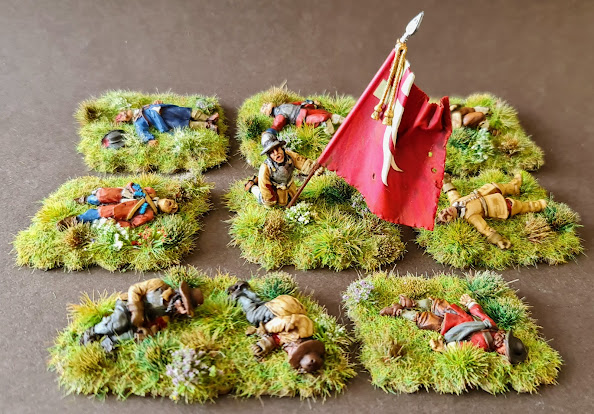 The title reference is from a David Niven auto-biography. The phrase was used by Michael Curtiz, the Film Director of The Charge of the Light Brigade (1936), when attempting to explain on set that he wanted a lot of rider-less horses in the background of the climactic charge; so it is fairly appropriate for Roundway Down!
My recent lack of posts has been because I've been very busy writing modelling for the Roundway Down game at Partizan.  I've almost finished this- just a few hundred tufts to go. I am currently working on the next release of the Medieval Army list book for the month end- I expect to add at least two or three new lists. I'm also finishing my contribution to a Helion book on Ceresole 1544, and writing some ancient army lists, and doing a little work on Renaissance. Lastly I was interviewed at length on the Plastic Crack Podcast, you can watch it here.  Busy, busy, busy!  :-)
Posted by BigRedBat at 15:51 No comments: