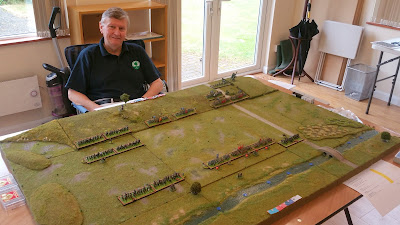 Had a fun day of chat and play-testing my forthcoming ECW rules with Andrew Brentnall (co-writer) in his Suffolk fastness. Above and below is the warm-up scenario, Montgomery 1644. I lost two of my three commanders in turn two, but still almost managed to turn the game around.

Below, for the main event, Naseby, Andrew has brought in a senior military advisor in the form of John D-Z. Andrew's 10mm ECW minis were both very numerous and beautifully painted, and the below wasn't the half of them. The terrain wasn't too shabby, either. 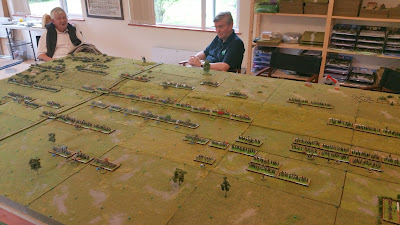 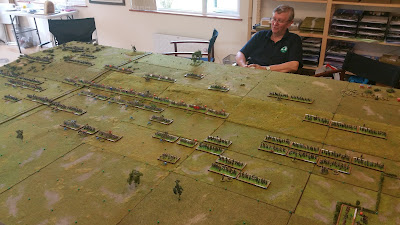 Above the lines are closing; below my Royalist veterans were gaining a slight ascendancy over the riff-raff in Parliament's front line. On the whole, though, the battle as a whole was not going well for ye Kinge (me) by the time I needed to hit the road. Prince Rupert was wounded and his cavalry were recoiling. The mechanics worked very well, though, so I was pretty chuffed! 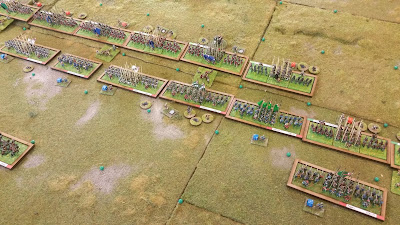 Posted by BigRedBat at 22:07 No comments:

On Friday I received the first batch of a new Deep-Cut mat design. It is so new that it doesn't yet have a name but I am calling it "Sagebrush steppe". 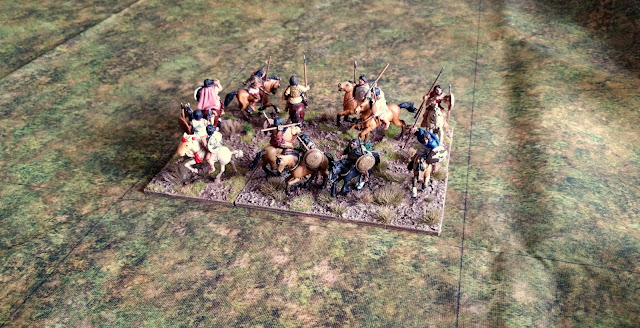 This is a design that I encouraged Deep-Cut to make, because I wanted something a more arid surface than the green "plains" mat that I use for most of my gaming. It has patches of a dry soil with faded grass and bushes depicted- here it can be seen with some of the Numidians I am in the process of re-basing. It matches my bases pretty well, which is very convenient and not entirely accidental. I think it'll suit parts of Spain, Italy, Asia and North Africa. It is also perfect for the Old West and will do service for Prax when I get my high llamas on the table.

In the official close-up image (below) the mats look more arid and more yellow ochre than they do on the table in daylight. There's a lot more green in them than the below image suggests. 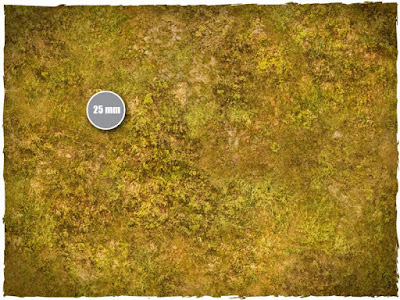 The new mats are in the Bigredbatshop in a variety of sizes and with and without grids.


n.b. Next week it is very likely I'll have to put up the prices of all the mats in the shop - I buy in Euros and, post-Brexit, costs have risen by over 10%. If you are buying in Dollars or Euros, of course, the mats are currently very much cheaper than they were two weeks ago!
Posted by BigRedBat at 11:12 No comments:

Email ThisBlogThis!Share to TwitterShare to FacebookShare to Pinterest
Labels: Deep-Cut

...turn out to be highly efficient weights for holding down Batbases whilst the superglue cures, that will hold the magnets in place. 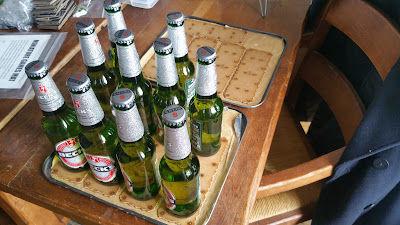 They will also provide a useful lubricant for the baser, later today during the basing process.   :-)
Posted by BigRedBat at 15:48 No comments: 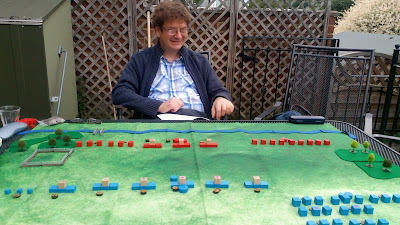 I had a very pleasant outdoor game this evening with mate Ian using my new pike and shotte armies. The armies were freshly sprayed wooden blocks. It took about an hour to purchase and spray them, a useful investment of time compared to my usual insanely high ratio of painting to gaming time. Youl'll be able to make out the pike battalia and troops of horse. The terrain cloth is a very nice 4' x 3' Deep-Cut "fields" mat with a 10cm grid.

Tonight's game was based on the Montgomery 1644 scenario that I recently played with Andrew Brentnall. The game was literally ended by dusk, unfortunately at an interesting stage.We had chatted too much and drunk too much Gavi di Gavi to complete it. Still, it was a whole lot of fun.

This is very circular for me because I remember playing my very first ECW game with Lego brick regiments just after the film "Cromwell" came out in 1970, with a set of wargames rules that I wrote especially for the occasion. In 1970 I lost; couldn't even win with my own rules! ;-) Mind you I wasn't doing a whole lot better tonight; plus ca change.
Posted by BigRedBat at 23:39 No comments:

Rebasathon II - Not a tray bake! 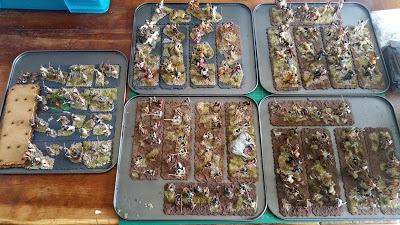 The Great Numidian Rebasathon continues apace. Above I've partially based 24 out of a required 40 stands. Each pair of stands will join together along the long edge to form a unit of ten light horse or eighteen light infantry - when complete, there will be around 300 "light"miniatures in this army. Most of the stands have been grouted. 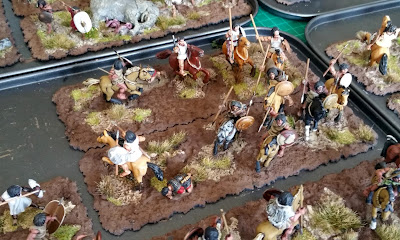 Above is a close up of one of the units. The light cavalry will all be circling, and there will be quite a few casualty miniatures dotted around on the bases. My new large bases allow for very dynamic basing styles. The brown areas of the bases will need to be painted, of course. There's also a good amount of retouching to do, as well,  as I once dropped a couple of boxes of the cavalry and they are quite chipped. I was not amused.

Aside from the lights there will be a couple of units of militia, a couple of cohorts of imitation legionaries, half a dozen nellies and a small force of cavalry "with bridles" to provide bodyguards for the generals. Altogether, it will constitute a most unusual army that will first see the light of day at the Wargames Holiday Centre on 23rd September.
Posted by BigRedBat at 10:22 No comments: 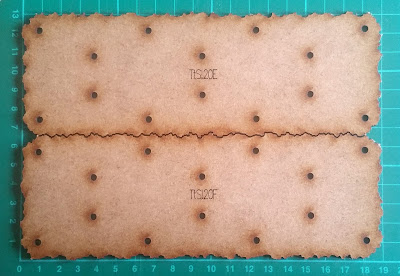 Above are a pair of my new 19cm-wide Batbases. I designed these for my own collection and will gradually re-base many of my troops onto them. The idea is that the irregular edges, with a chambered profile, will blend into the terrain cloth. Below, I've started to rebase a few units of Numidians. I chamfered the edge of the bases, added magnets and primed them with some cheap auto-primer to seal them. I sliced the minis off of their card bases and mixed them in with some new recruits recently painted by Shaun McTague.

Below, I like to salvage as much of the old base texture as possible as it saves time and money and reduce landfill. 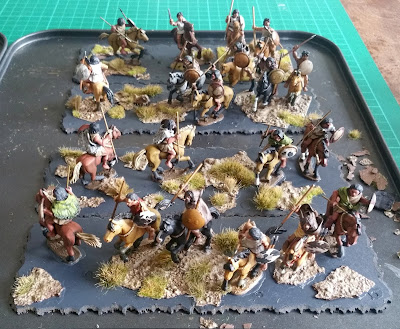 Re-basing the Numidians will be a big job as I have 400 or more of them altogether- including over 100 cavalry. When finished I estimate they will fill ten 4L Really Useful boxes.

Posted by BigRedBat at 12:11 No comments: