Free Ballista is in the shop 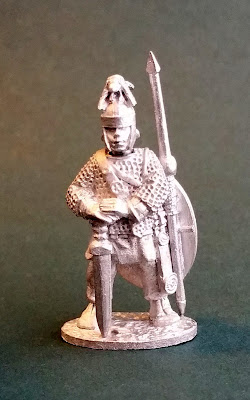 Mate Keith at Aventine Miniatures very kindly gave me a small batch of the Young Ballista miniature that Adam sculpted for Harry Sidebottom. Ballista is the hero of Harry's "Warrior of Rome" series; a noble Angle whose fortunes rise (and occasionally fall) within the Roman military.

I am going to give one away with the next twenty orders over £30 in the BigRedBatshop. The link to the miniature in the shop is here. As well as the rules and bases, I recently received a big resupply of the excellent Deep-Cut cloth mats... 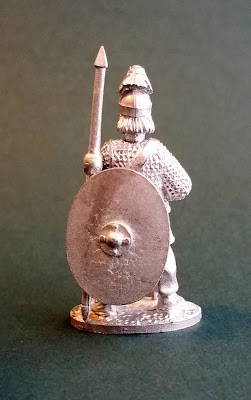 Adam painted one up and presented it to Harry, here he is! Adam has gone with the alternative spelling (there was a real Roman General called Balista). 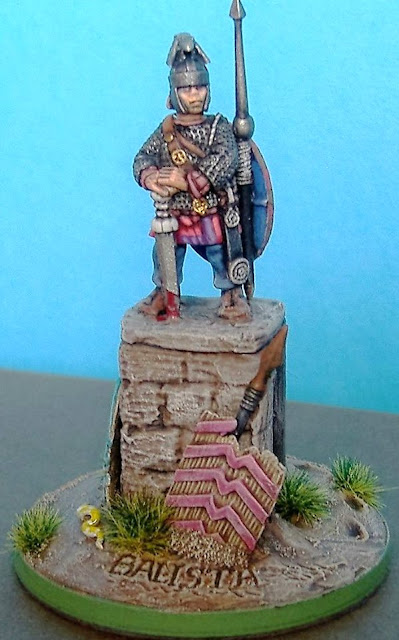 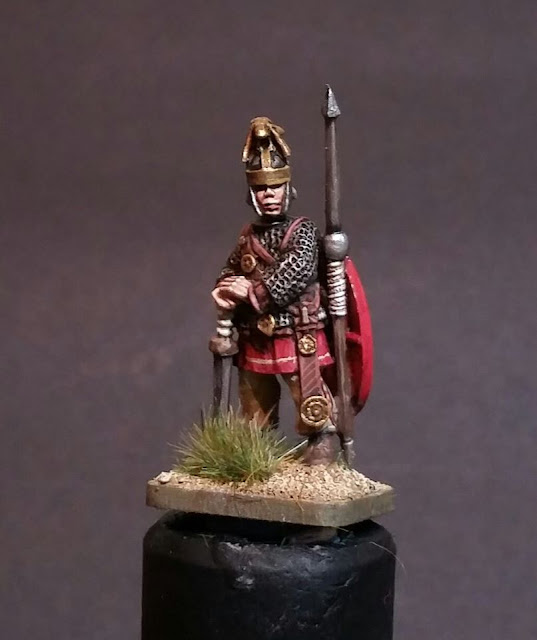 Posted by BigRedBat at 13:34 No comments:

Email ThisBlogThis!Share to TwitterShare to FacebookShare to Pinterest
Labels: Ballista

To Partizan and back...

This weekend I went to Partizan and met up with a lot of fine wargaming chaps, including but far from limited to James, Steve, Phil and Matt of the Newark Irregulars, Curt and Mrs Campbell of Analogue Hobbies and Harry Sidebottom and Ben Kane (a bonus author!) and of course Keith and Adam from Aventine. I am afraid I was only able to take a very few photos but here are a small selection. 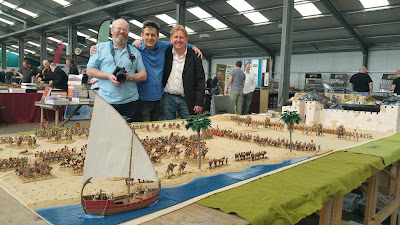 Dr Phil Hendry, me and Harry Sidebottom, author of the book on which the game was based. Harry said he had a great day. I'm wearing a laurel wreath donated by James. 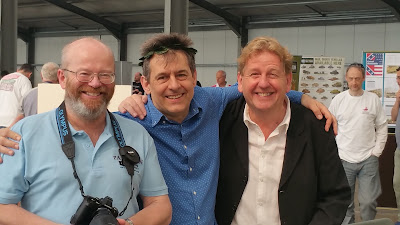 Below, our Circensium gaming table groaning with Phil's lovely collection. The quality of his minis is extremely high, and the fortress beautifully made of 10mm foam card. It was great to meet so many people who now know the "To the Strongest!" rules and who are enjoying them! We played this game twice, One Roman win, one draw. 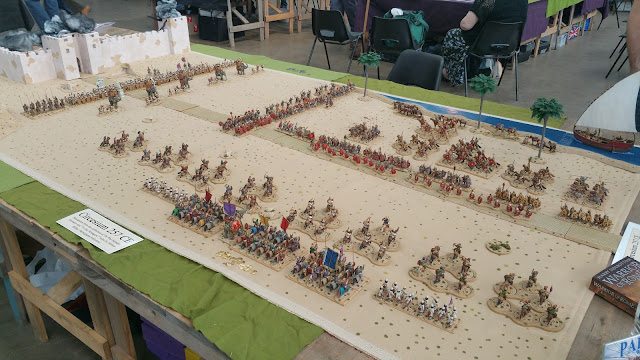 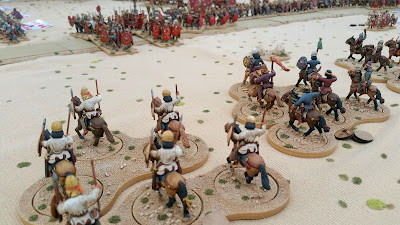 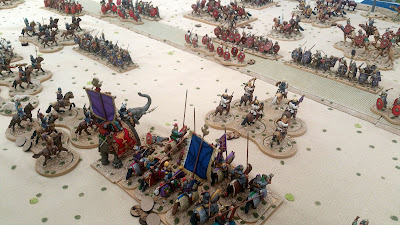 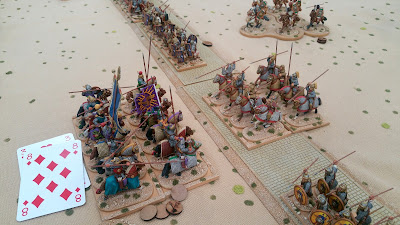 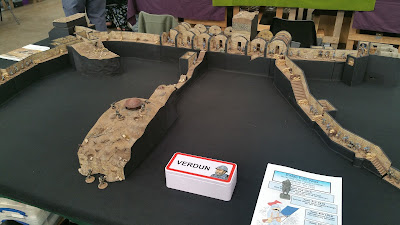 Aventine Adam sculpted a super model of Ballista (the Roman General from the books and battle) and Keith brought me a couple of dozen- I need to get one painted up. I'll do a promotion with them when I have time.

Here are a couple of shots of James Morris Fort Vaux game- the modelling was stunning, as was the poilu moustache. James always comes up with something original - often, as in this case, three dimensional. James deservedly won an award- best in show I think. 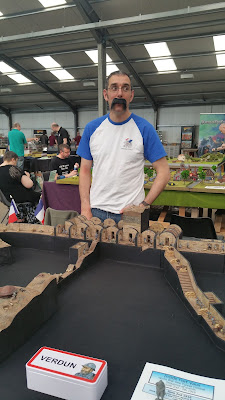 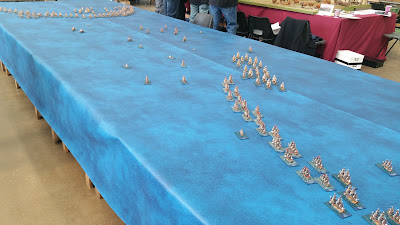 I was very taken with the Anglo-Dutch war naval game (above)- so many lovely ships- and this novel game using painted pegs, below. 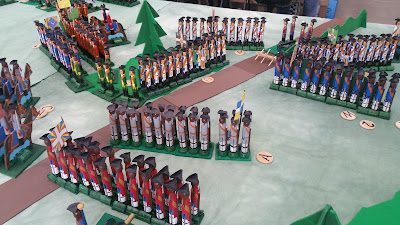 There were lots of other stunning games which I sadly had no time to take photos of.

Tricks, Laurence and the Irregulars did a super job with the show- the new venue is a step improvement over Kelham. I can't make the summer show but will be back in 2017!
Posted by BigRedBat at 11:30 No comments:

To Newark with Ballista and chums!

On Sunday I'll be at Partizan Wargamign and History at its new Newark Showground home running a game of To the Strongest! with Dr Phil Hendry and his wonderful Middle Imperial Roman and Sassanid collections.

The Battle of Circesium will feature a Roman force, led by Ballista, Dux Ripae, fighting its way through a Sassanid horde to the relief of a besieged city. Here's a photo that I have lifted from Phil's excellent blog where you can see his lovely Third Century Romans and his Sassanids that will be used in the game.

Not only will there be me, Dr. Phil and his collection, we also have special guest Dr Harry Sidebottom, author of the Warrior of Rome and Thrones of the Caesars series. Harry will be signing his novels and passing out a free freshly sculpted miniature of the aforementioned Ballista (the hero of Harry's Warrior of Rome series) to those buying a book. Moreover, there will also be copies of "To the Strongest!" for sale and not only will £20 get you a copy of my worthy rules, but you'll get a free Ballista and a free sample pack of chits and bases, to boot! I'll even sign the rules too, if you want.  ;-)

Last but not least,  not only will we have me, Dr Phil Hendry and Dr Harry Sidebottom, we will also have Keith Branagh and Adam "Smithy" Smith from Aventine Miniatures. Keith runs the friendliest miniatures company in the land and Adam is a genius who sculpted all of the miniatures that will be used in the game, and the new Ballista, to boot.

If you'd like to play the game and try out the To the Strongest! rules, post a message and I'll book you in. The game is in the centre of the gaming zone at DG15- look out for the city walls of Circesium!
Posted by BigRedBat at 15:02 No comments:

Sorting out the lead mountain

This week I've been reorganising the downstairs portion of my Lead Mountain. Most of the downstairs lead mountain is stored above the bookcases in my lounge. Here are the "befores". The Foundry boxes would occasionally collapse leading to what I refer to as a "lead shower" - a very unwelcome and uncomfortable experience! 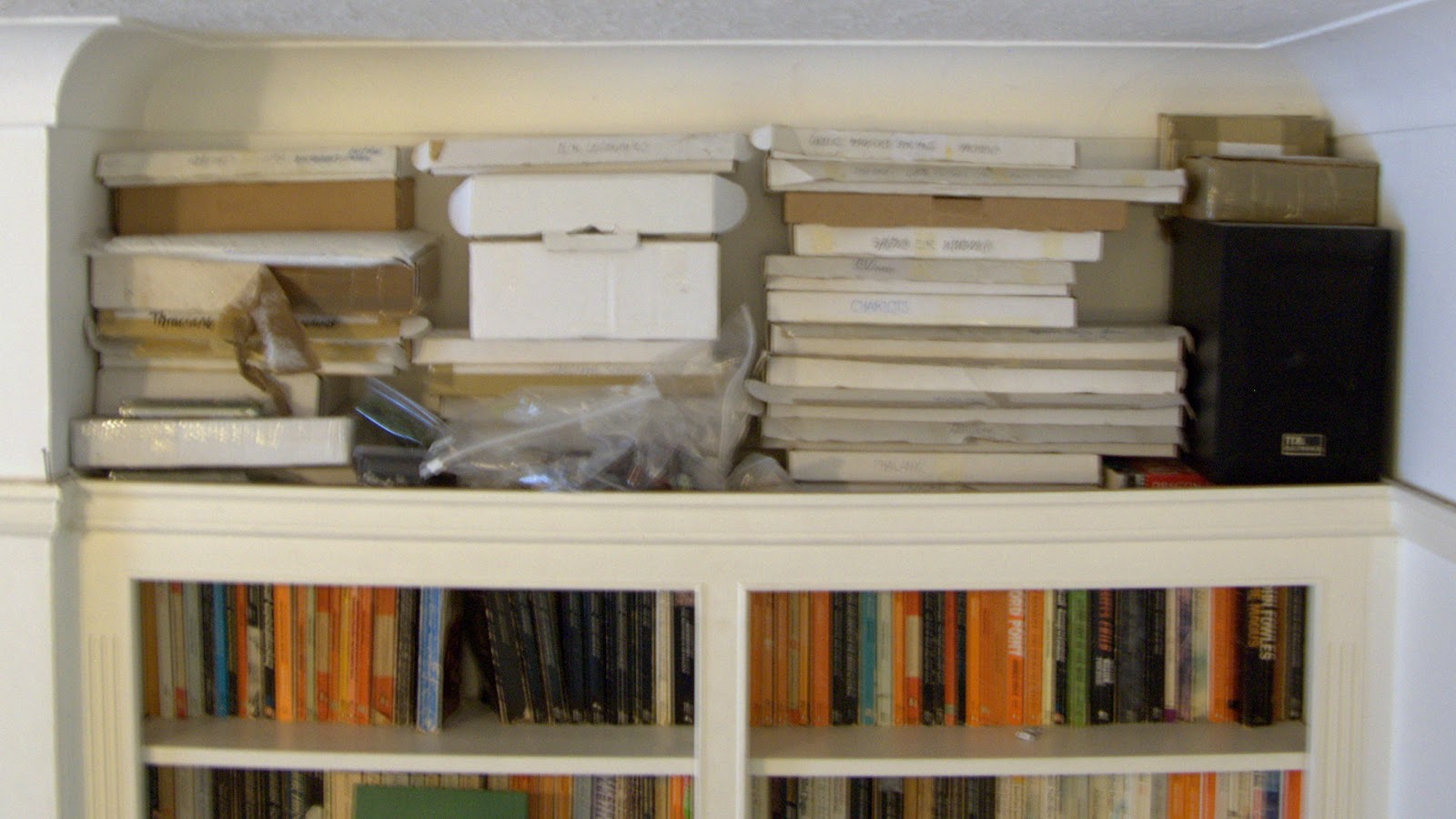 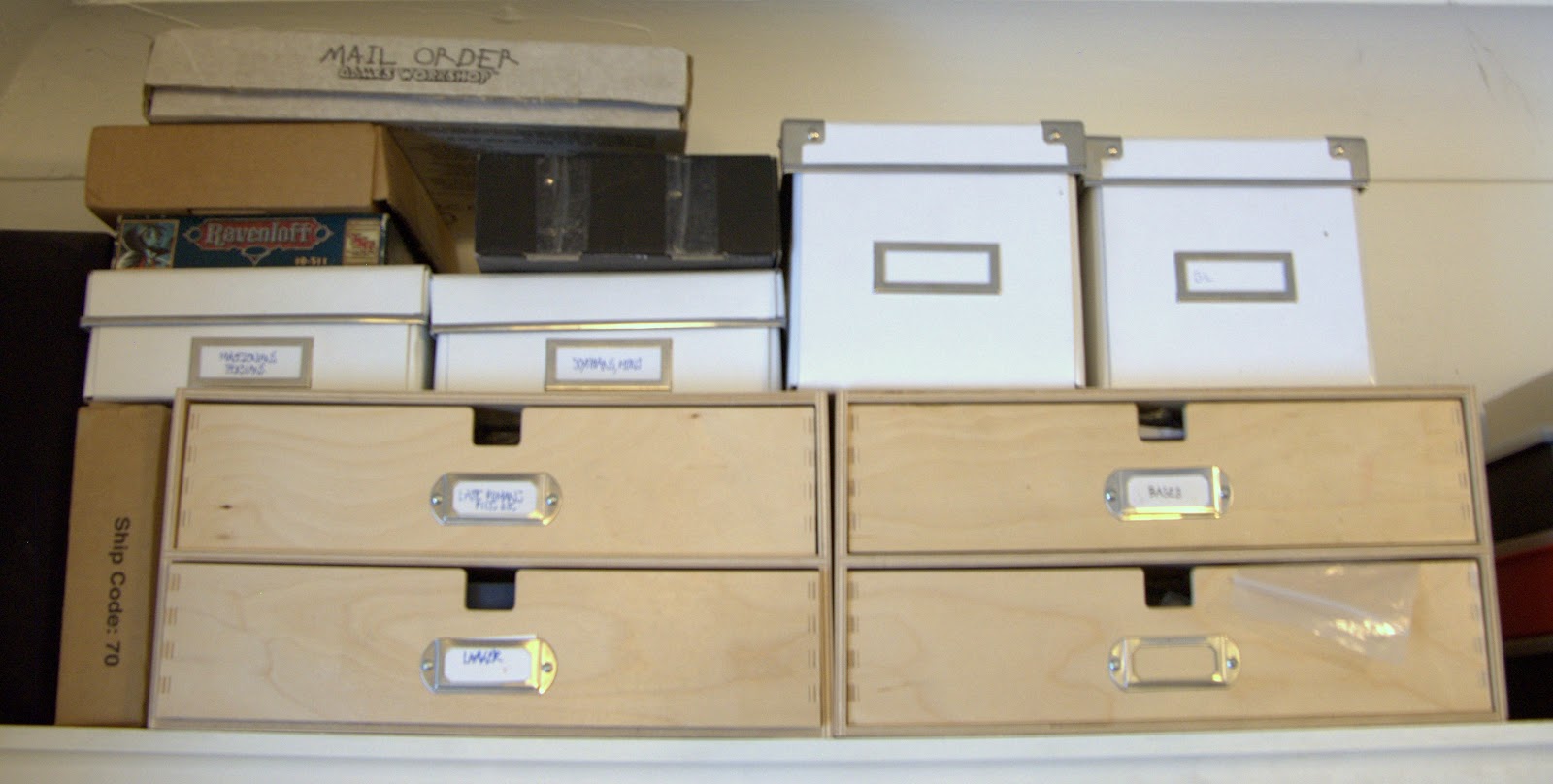 And below are the "afters" shots, with the minis sorted into new storage drawers that I picked in a sale at out local Futon Shop. I've added trays inside the boxes but still need to label them. The black objects are speakers. Alarmingly, all the boxes, together, have space for only half of the Lead Mountain, the rest of which remains piled up in the loft. 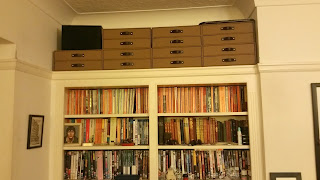 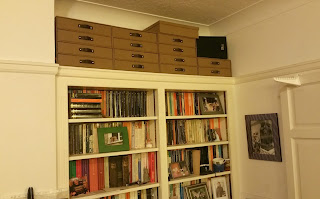 I clearly need to paint more minis or buy less!

Posted by BigRedBat at 09:15 No comments:

I covered around a half of the bases from my last post with static grass using an electric applicator, and then glued tufts on top of them, perhaps 60 on each base. I then added some flowers (less is always more with flowers) and weeds. Finally I matt-varnished the base and clumps. These units are now ready to march into a hail of Wars of the Roses arrows.

The majority of these lovely Perry miniatures were painted by mate Shaun (Redzed painting) alongside some minis painted by Patrick Connor.

I've just put most of my Bat Bases on 20% or 25% off promotion for one week, if you would like to try some out for yourself!
Posted by BigRedBat at 11:55 No comments:

Email ThisBlogThis!Share to TwitterShare to FacebookShare to Pinterest
Labels: Batbases, Wars of the Roses

This is part II of a three piece posting on using my new irregular bat bases.  In part I I prepared the base and attached the minis. 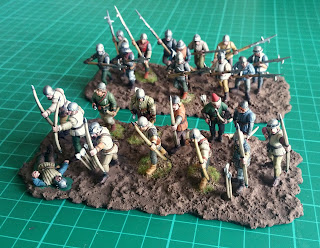 Above I have carefully applied BigRedBatGunk to the wooden Bat Bases using a small palette knife. This is a basing compound of my own invention that is pre-coloured so that it doesn't need to be primed and which saves a heck of a lot of time.  I really need to get that into the BigRedBatShop...

Below, the bases have been dry-brushed with two highlights (I use a mix of Games Workshop Steel Legion Drab and cheap Buff Titanium on all my bases).  Finally I add a wash of matt acrylic varnish with a couple of drops of Army Painter Strong Tone ink in it, to protect and add a little depth. The base is now ready for flocking (during which I'll cover up most of the lovely groundwork; go figure!). 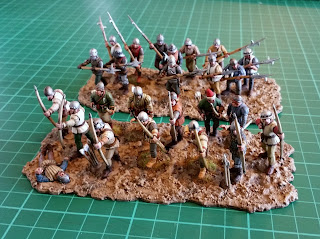 In part III later this week I will flock the bases and then take some proper photos of the finished units.
Posted by BigRedBat at 10:43 No comments:

New Oriental booklet for To the Strongest! 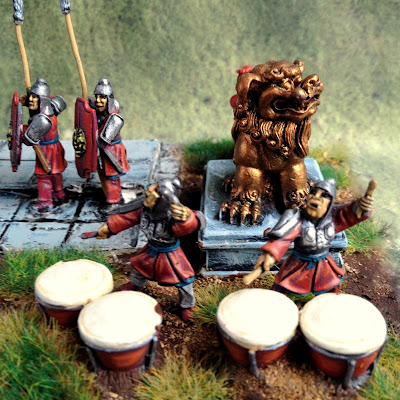 
I've just published a new To the Strongest Oriental booklet containing eight Chinese lists (written by Roger Calderbank) and the two existing Japanese lists. The free booklet can be downloaded from here.

I've added a bunch of armies recently and if you'd like to see what lists are available, you can find them here in the Army list Index.
Posted by BigRedBat at 20:06 No comments:

...I promise the BigRedBatCave won't turn into a shop, but I have one more lot to sell. 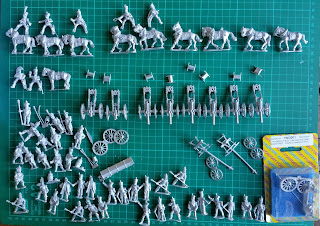 Posted by BigRedBat at 13:45 No comments: 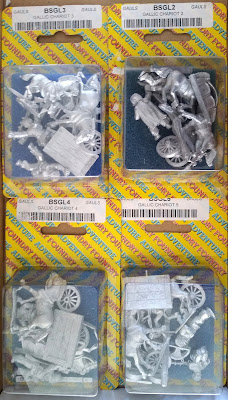 In a recent tidy up I've come across four spare Foundry Gallic chariots.  Nice models with lots of accessories (severed heads, quivers etc.).  £14 each at Foundry; yours for £10 each plus postage at cost!
Posted by BigRedBat at 14:34 No comments: