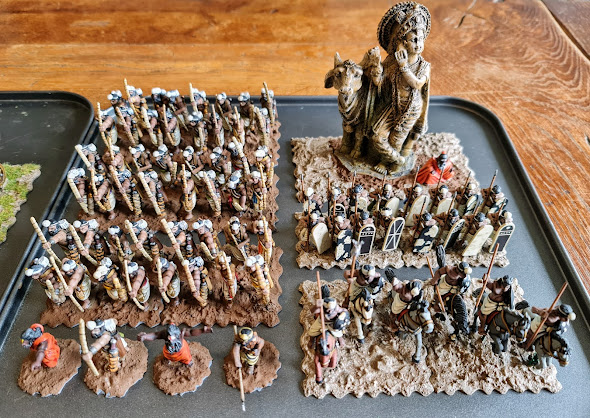 Above are the rump of my new Indian army for Chalgrove/London GT, excluding the elephants, now partially based. Three units of longbows, one of javelins, compulsory rubbish cavalry and golem (actually the camp ;-)  ). Mostly painted by Shaun McTague and Dan Toone, with finishing and basing by me. Some of these are just about to go off to chum Ian for flocking.
Below are the skirmishing archers and the chariots, still lacking crews but otherwise mostly there.

Not shown yet are the (numerous) elephants which are mostly complete, except they need additional crewmen and snagging.
So I'm really pleased with progress- it's looking good to have everything complete in time for the Chalgrove tournament on 4th September (and the second tournament at the London GT on the 26th). If you fancy coming along, we have space in each but we'd need army lists for Chalgrove in the next few days.
Posted by BigRedBat at 11:07 6 comments:

My chum Ian has been quietly collecting and painting up an army of old-school goblins, composed of the earliest pre-slotta Nick Lund Chronicle sculpts. They are quite charming, I believe, and so I wanted to post some images of them. They are mounted on bespoke magnetic bases which are thoroughly grass flocked.

Should you have any of these minis (or indeed Nick's later Grenadier sculpts) languishing spare at the bottom of your bits box, please drop me a line at the email address to the left and I'll put you in touch with Ian- I know he'd love to swap for or buy some more.
Posted by BigRedBat at 17:51 3 comments:

Email ThisBlogThis!Share to TwitterShare to FacebookShare to Pinterest
Labels: Fantasy 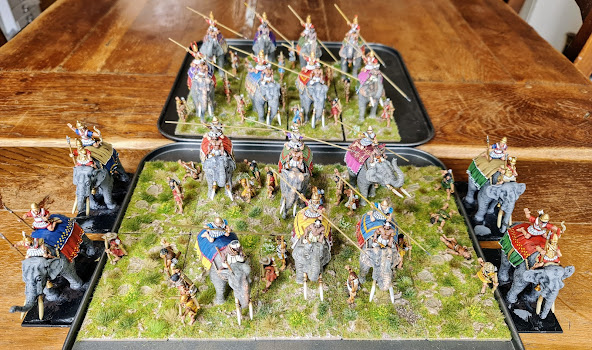 As well as yesterday's post I have also been working on the huge Ipsus game for the London GT. Most of the work has gone into this new elephant screen, which will cover the 20' plus frontage of both phalanxes.

14 of the elephants are finished, and Shaun McT returned four more to me yesterday. I have "pre-based" these latter (they fit on the four elephant-less bases) so it shouldn't take long to detail (dry-brushing and adding skin-pigment issues) to complete them. All of the elephants are Aventines, although the most recent four have Relic heads to introduce a little more variety. When deployed, these will be accompanied by roughly 240 light infantry which are 90% finished and which I'll show later on.

There will also be another 15 elephants on the table, representing Seleucus' herd.

The first outing of the huge Ipsus game will be on 25th September at the London GT in Edmonton. If you fancy taking a turn as Antigonus, Demetrius or Seleucus you can book a ticket here! You'll also get to play chum Tim's Trebia scenario.

With just over three weeks to Chalgrove I find myself desperately finishing and basing minis for my army. This year I'm bringing Classical Indians; the army of King Matar of Paneer (so-named because Tim, who reviews the army lists, describes my entry as "cheesy"!).

Here are the minis other than the formed archers and elephants (which will feature in future posts).

...and here's a closeup (below) of the as yet partially-based javelinmen.

I'll take proper pics later on; it will be a most unusual force.... Most of these minis are from the Miniature Company and Vendel and were painted by Dan Toone, but Shaun McT is painting reinforcements. I've highlighted all the minis and am painting most of the shields.
The remaining work is mostly in the longbowmen, who are mostly painted but not yet based, and the elephants and chariots who still lack some crewmen, also the camp. Then it'll be a mad rush to base, grout and flock.
To recap, this year's tournaments are:-
Chalgrove Tournament “The Worlds” Saturday 4th September 2021
The Chalgrove Tournament AKA “the Worlds” is on 4th September at Chalgrove in Oxfordshire. If you come, you’ll get to play four games during the day, using 135 points armies from either of the current releases of the Army List eBooks.  We will be using Even Stronger v9 . Organised by Steve Dover, it is always a great day’s gaming.
It costs £10 to enter- if you think you can join us, email me ASAP at the address to the left and I’ll forward your details on to Steve.
London GT Tournament “The Nationals” Sunday 26th September 2021
This year's GT has a theme of “Rome and Greece at War." If you don’t have a suitable 135 point army for the GT but want to join us, then please let me know, I’ll lend you one- legionaries or pikes, perhaps.
You can bring any army from the following chapters of the Ancient Army List eBook:

"Frogs around a Pond",
"Kingdoms of the East",
"Rise of Rome”,
“Rome’s Empire”
Any army valid between 300 BCE and 300 CE from “Across the Indus” or “Beyond the First Cataract”
The format is very similar to Chalgrove, four nail-biting games in a day on a Swiss system.

If you’ve not yet booked a ticket for the GT, please get an entry in ASAP, and bring a friend if you can. It is a great venue and we had a super time, two years ago when it last ran- I have never seen so many gamers in one place, gaming! It’s easy to get to, being near the North Circular, M1, M11 etc., good parking, light and airy, and even has a bar!
I hope to see you at one or t'other tournament!
Posted by BigRedBat at 14:36 1 comment: