Confessions of a Basing Nazi Part 2

Before basing, it is really beneficial to paint the metal bases of the figures to match the eventual colour of the base; saves time and reduces the probability of needing to repaint the feet.

I make the bases in big batches and will cover this in another post, later; they are magnetic on the underside, and sealed with spraypaint on the top and sides. 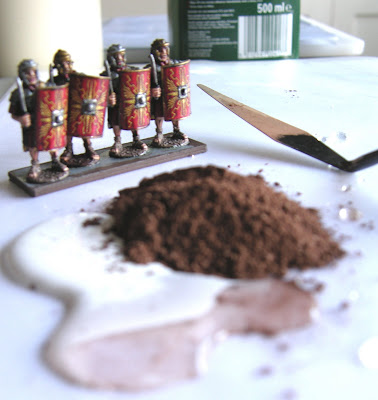 So above, we have the basing mix; roughly 1/3 wood glue, 1/3 water and 1/3 dry mix as per the last post. Stir it up with the palette knife, then apply to the base, as below. Can anyone guess why there is an arrow, cut into the square base with the archers on? 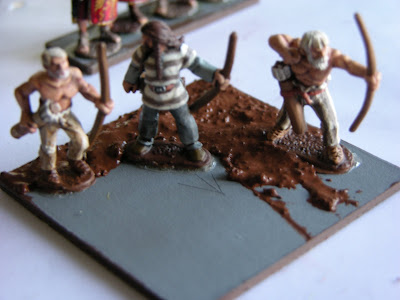 Finally, it is essential to let the base dry on a magnetic surface (as below); or it will warp! I use an old baking tray. Make sure that the surface and the underside of the base are clean. 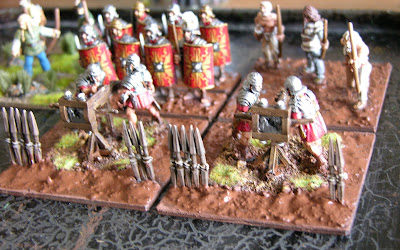 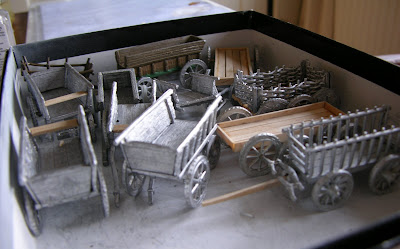 This is my expanding Celtic baggage park. I've decided that 12 carts and wagons aren't quite enough, though; I plan to order a couple more of the very nice Front Rank ones (front right).
Posted by BigRedBat at 15:01 2 comments:

Confessions of a Basing Nazi Part 1

Greg of Gloranthan Army has asked me to describe how I do my basing.

Now I'm liberal in very many ways, but politically just to the right of Genghis Khan in terms of my approach to basing. My bases must all be exactly the right size, a standard colour and finish, matt varnished, substantially waterproof and without a hint of warping. Any figures I buy are rebased to my standard, as are most figures I sell. 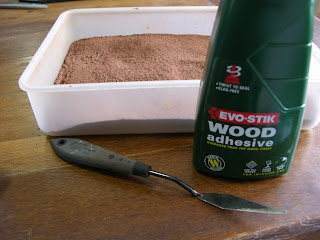 This big box of gunk largely consists of plaster and sand/small grit, but I also add a pigment to save on painting time. I also use a strong Wood Glue and a good springy palette knife that comes to a fairly fine point. 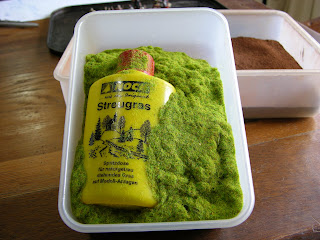 This is my static grass, and trusty Noch puffer bottle.

And this is a colour guide I made a couple of years ago, that shows the stages in the process, which I'll describe in the next post. I use it to check that my different armies are based on similar colour bases.

The 8 stages are terribly time consuming, and there must be quicker ways of achieving the same result; nonetheless this is my way, and the ONLY TRUE WAY. n.b. the colour have been a little washed out by the lighting.
Posted by BigRedBat at 13:53 5 comments:

Nothing very much to report. I'm trying to finish off a few odds and ends, namely:-

3 legionaries to complete a group of 8
2 ballistae and crews to feed the maw of eBay
A solitary middle Imperial Roman, kindly donated by Greg, who I need to finish my first MIR unit
3 celtic archers to complete the final 4th archer unit of my gallic army (at least 3 units of archers too many, but I had the painted figures)
3 Pictish flags for the 3 units I recently based

Finally, I need to finish a beautiful Thracian standard bearer, that I originally primed at least 2 years ago. He's such a lovely mini (and very complex to paint), that I've shied away from painting him all this time! 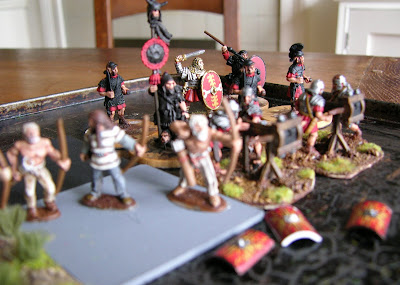 My intention is to finish off these odds and sods, to clear my painting table for Greg's gladiators. These lovely minis need basing, and I'll probably add a few highlights to the helmets and swords to make them shinier; I believe that helmets should be really bright. I hope you won't mind, Greg?
Posted by BigRedBat at 23:13 4 comments: 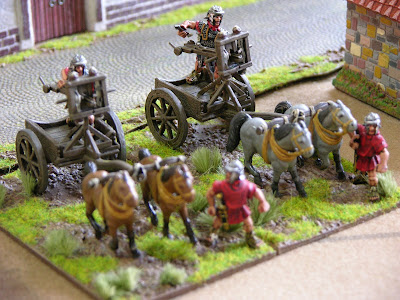 These are cart-mounted Ballistae that, whilst strictly part of my EIR Army, I sometimes use with the Caesarians. They were surprisingly time-consuming to assemble...

Tonight I have been basing my final Pictish unit and rebasing some Pictish and Viking archers, and sticking more bits of yet more carts together.
Posted by BigRedBat at 15:57 8 comments: 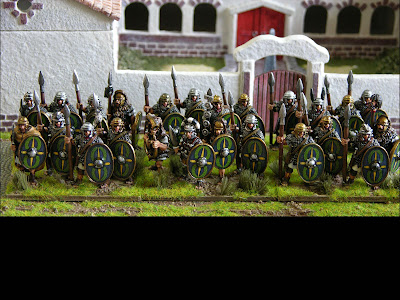 This is the unit of Auxilia I finished in December; I'm really pleased with them. I'd been planning them for at least 3 years! Mostly Foundry Salehs, but some Copplestones and a couple of Black Tree minis, too. Oh, and a Crusader Centurion! 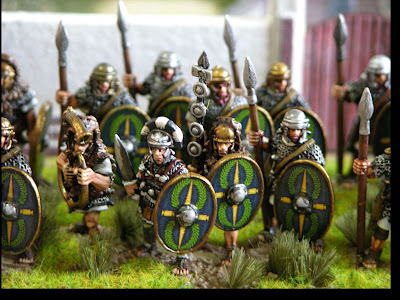 LAter on, I'll talk more about my plans for the other Auxilia Cohorts.
Posted by BigRedBat at 18:10 5 comments: 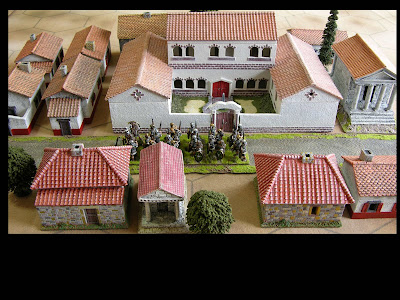 Most of the buildings, including the superb villa, were made by my Scottish friend John S. I'm hoping that I'll be able to get him to build me some city walls at some stage, since there are so many rapacious Germans wandering around Italia at the moment!

The villa roofs lift off. The rooms inside would look great with mosaics... need to lay some, one day.
Posted by BigRedBat at 09:18 2 comments:

Secundus was asking what I have on his blog, and here they are; 5 units of lights, 8 Warband, 2 smaller warbands of Auxilia or "Hilltribesmen", 3 units of heavy cavalry and two of lights. Around 2/3 of these were painted to a fantastic standard by my good friend Nick S, and I painted or repainted the remainder, and based. Figures are a mix of A&A, Renegade, Foundry, Newline and Gripping Beast. The picture is clickable... 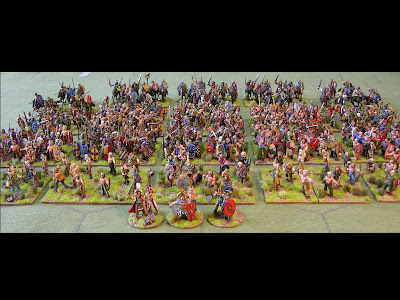 Marius' army, under my command, yesterday suffered a serious defeat at the hands of the German army.

The Roman army was deployed along a low ridgeline just to the west of Mutina: 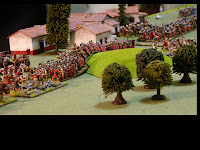 The Germans attacked along the line of the Aemilian Way: 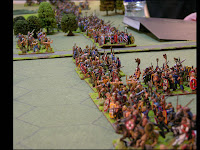 The German centre was led by Boiorix, hero of Vercellae: 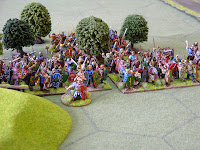 A German left hook piled pressure against the Roman right. An attempted Roman counter attack by an outflanking force against the rear of the German army ended in disaster, with German cavalry, charged in the rear by Numidians: 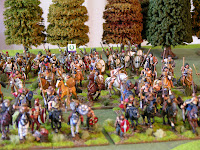 However the Germans demonstrated that they could fight just as valiantly to the rear as to the front, by killing the Roman General leading the attack!

By the end of the game the Germans were lapping around the Roman wing in a most alarming way. A second German attack against a weak point between the Roman left and centre also inflicted serious casualties. Here Romans can be seen retiring into Mutina, whilst Marius leads the rearguard: 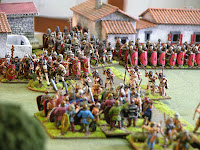 One glimmer of hope for the Romans, is that the majority of the casualties were suffered by supporting allied (generally light) troops, and that most of the legionaries lived to fight another day; which is just as well as the German and Celtic army now controls Italy north of the Apennines...
Posted by BigRedBat at 09:29 12 comments:

...so, we left our Roman Campaign on the battlefield of Vercellae (101BC), where a final desperate German charge personally led by King Boiorix of the Cimbri, slew Sulla and wiped out his entire command.

Although the day went to the Germans, Marius' forces were able to retire to the Roman camp in good order and subsequently retreated, leaving the Cimbri in temporary control of much of Cisalpine Gaul.

In our campaign, the Cimbri have gathered a further confederation of tribesmen and are now advancing along the via Aemilia towards Bononia and the Apennine passes giving access to the Roman heartlands.

Marius and Catullus, both re-elected as Consuls for 100BC, have gathered a new Roman and allied army and advanced to meet them; tonight's clash will take place immediately to the West of Mutina, also on the via Aemilia. The new force is built around a core of Marius' veteran legions, but includes many recently levied troops and mercenaries recruited from North Africa.

Should the Romans fail to stop the Germans at Mutina, tonight, it is likely that Bononia will fall and that the Germans will be able to force the Apennine passes and threaten Rome, itself....
Posted by BigRedBat at 14:13 No comments:

So I knocked a couple of wagons together, and whilst they don't look bad, the prospect of buying some more, ready-made, from Irregular or Front Rank is looking increasingly appealing. It just takes tooooo long to make them, even when using scavaged/purchased parts as I did with these (and in all honesty I don't think they look as good as the bought ones):- 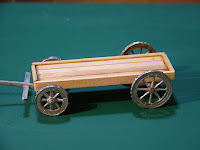 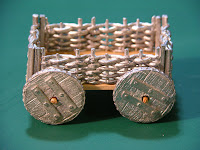 In parallel I've been collecting figures for the project, and I have around 50 so far. They are a far less military bunch than the normal stuff I paint... to get them I had to end my long vendetta with Foundry. I was pleased with the purchases, because although the prices were very steep, even in the sale, Foundry had upped the pack sizes so I got some useful minis I didn't expect.
Posted by BigRedBat at 00:19 2 comments:

I seem to be very good at buying figures and much less good at painting them! I'm now in for £169, with 116 figures bought and not one finished, and it's only January 8th! I'm also not very good at getting around to taking photos; hopefully I will tomorrow.

My big spring project involves wagons and carts; many wagons and carts. I've stripped my bits boxes and found a Minifig cart and wagon circa 1974 and improved them with Irregular Miniatures wheels:- 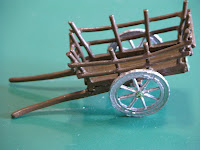 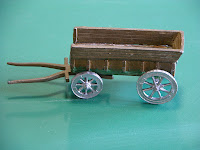 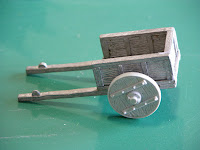 Also a Citadel adventure wagon c1990, and a Front Rank wagon from year before last:- 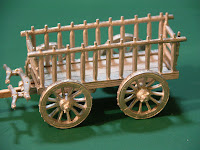 On the basis of a back of a fag packet calculation, this leaves me at least 10 vehicles short of what I need, and wagons aren't cheap! Happily Irregular Miniatures is a great place to buy bits and bobs, cheaply:- 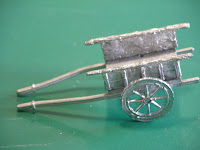 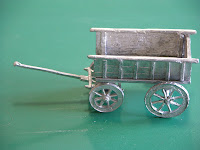 I've ordered 5 carts and wagons from Ian Kay at Irregular, and a load of wheels for scratchbuilding. Let's see if that will do...
Posted by BigRedBat at 00:07 2 comments: