This is a unit I bought (poorly painted) on eBay, with a dozen additional figures primed and added.  They are going to be a Cohors Equitata, but not a standard auxilary unit... more anon.  Since the above photo they have had 2 more painting sessions and are now pretty well blocked in.
Before the game on 2/9, I have these and another similar cohort to paint and base.  I also have 2 painted cohorts of auxiliaries to retouch and base, two cohorts of Praetorians to add shield designs and base, and hopefully 42 more cavalry to finish/base if they come back from the painters, in time.   Lastly, I need to paint some command stands: busy, busy, busy!
Posted by BigRedBat at 10:46 8 comments:

A recent article in Ancient History Magazine (Vol V, Issue2) suggests that the Sillian horse were originally of Gallic origin, from Lugdenesis (Lyons) but were based in North Africa from around 20AD.  Their original commander may have been an Equestrian named Gaius Silius Aviola, and his name may have stuck with the unit for the next half century, even as the original Gallic recruits were presumably completely replaced by North Africans.  All pics are clickable.

“The Silians had served in Africa during the governorship of Vitellius.  Subsequently summoned by Nero to be sent ahead to Egypt, and then recalled on account of the war with Vindex, they bided their time in Italy.”  Tacitus, Histories 1:70.
When the rebel General Caecina was approaching Italy across the Alps, from Switzerland, this unit, stationed in Northern Italy, promptly deserted the Othonian cause for the Vitellian (presumably because of their earlier connection with him).  They fought at Ad Castores and 1st (and possibly 2nd?) Cremona, and were awarded citizenship for their valour becoming Ala Siliana Civium Romanum.
Alae (or “wings”) in this period would have had a theoretical strength of around 530 men, organised into 16 Turmae (“swarms” or troops) of 30-32 men each.  In 1:20 scale, I think that the best way of representing this is a unit of 24 figures that can be split (if necessary) into 2 or 4 subdivisions.

These Black Tree minis were very nicely painted by Dr. Simon’s mystery painter.  I retouched and stained some of the horses, and highlighted the riders, then based.  I gave them an Aventine Vexillum with LBMS transfer and a spare Foundry Imago.  I’m very pleased with how they came out, particularly the hand-painted shields, which make a bold splash of colour.  These will be supporting the Vitellian cause on 2nd September, at Partizan, by which time I need to paint/retouch/base another 48 various cavalry and around 150 infantry... gulp.
Posted by BigRedBat at 14:29 9 comments:

An astonishing 6 months has passed, in a blur, since my resolutions for 2012, so I though it a suitable time for a quick review of progress.

My main objective for 2012 was “for my Early Imperial Romans, what I'm calling my sixty/sixty/one:sixty programmme.  This will involve building up my EIR Romans up to sixty cohorts of 8 legionaries, and sixty auxiliary cohorts/alae of either 8 infantry or 6 cavalry, which (with Praetorians and rif-raf) will give me around 1150 EIR figures, enabling me to fight a medium-sized 69/70 AD Civil War battle, at 1:60 scale.”  This is going really quite well, although I didn’t start it until May.  I added my big unit of rioters after Salute, and an additional unit of Gallic Auxiliaries in June, and my first Ala is about to roll off the production line.  I anticipate I’ll have all the auxiliaries completed by mid-September.
I’ve just scheduled by first big outing for them for Partizan on 2nd September- I’ll be working on this game with a couple of mates, Dr. Phil Hendry and Craig Davey; more anon.  Toward said game I do need to finish a lot more troops- as many as 8 more units, so there is a furious two months of brushwork and basing, ahead!

My secondary project was to” finish my projected 100-man cavalry division, described on my other blog.  ...and after that, whatever I fancy of several infantry formations I have underway.  I'd like to think I'll have a complete infantry brigade by the end of March, and at least 2 more by the end of the year.”  I still haven’t quite finished the cavalry division (now just a question of basing the final regiment, and painting some horse artillery) , but I did churn out the equivalent of a couple of infantry brigades for RTB’s spectacular Petit Borodino game, back in April.  I really need a set of rules that I feel I can get behind...
My third resolution was “to paint a unit or two for Glorantha, which I've not really touched for 2 years.”  This is a complete fail, so far- will review this in September!
I've enjoyed my wargaming this year, than last.  We are gaming locally on almost a weekly basis, again, and I've very much enjoyed my occasional forays to the "lead belt", where it has been great to meet some people I've been chatting to on line for donkeys' years, in t'flesh.  Onwards and upwards!
Posted by BigRedBat at 12:00 10 comments:

This is the second batch of Happy's (Gordon Smith's) Aventine Early Imperial Romans, which he has kindly let me host.  They were painted between Sunday and Wednesday, I gather, which is at least 5 times as fast as I can paint! All pics are clickable. 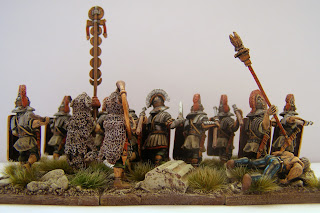 Gordon puts his rapid painting speed down to Devlan Mud washes.  He was more than a little distressed yesterday, when I told him that the product has been discontinued! 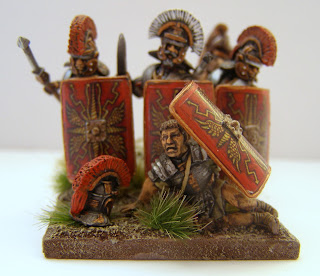 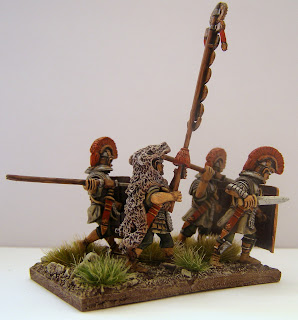 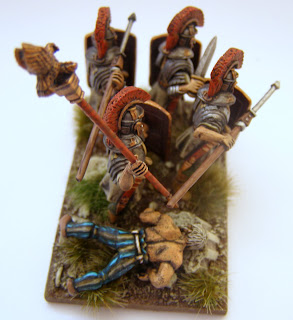 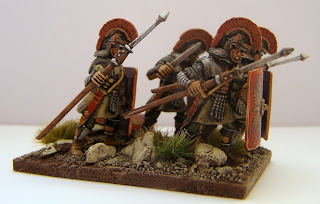 These are all head-swaps on the standard legionary bods, as Gordon wanted an entire unit with crested helmets. He has added some Foundry casualty figures.
I really love what Gordon has achieved here, each stand is a beautiful diorama in it's own right!  Also I'm liking the animated Aventine poses more and more, each time I see them.
Posted by BigRedBat at 10:26 14 comments:

A terrible WIP photo but you get the drift.  Black Tree figures from Dr. Simon's Mystery Painter, with a little highlighting and such forth.  Basing tomorrow!

They are going to be Ala Siliana, from North Africa, who fought in the 69AD Civil War.
Posted by BigRedBat at 19:52 6 comments: 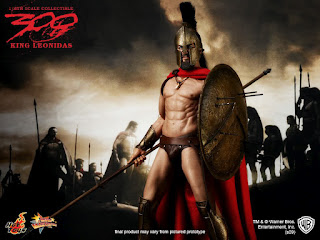 A quick post to welcome Brent, who is my 300th follower, and to thank everyone else for popping by so regularly.  I am very much enjoying the blog at the moment, and there should be lots more posting in the months to come!

This week people keep sending me pictures of their minis, which are invariably far better painted than my own;  it's becoming a positive curse.  ;-)
Today's minis are beautifully painted by Gordon Smith, and are from the new Aventine EIR Range for the Marcomannic wars.   Gordon took the pictures, too.  The shield designs are LBMS (specially re-sized by Steve from the ones for the A&A range).  All pictures are clickable. 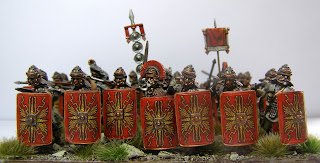 Below is the full unit.  Gordon has wisely gone for 60mm deep bases as the Aventine's are in particularly animated poses. 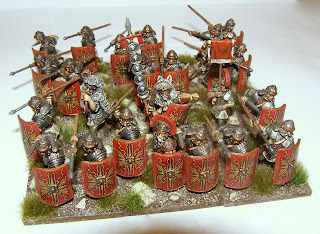 I love the mini below with the crested helmet.  There are a very large number of helmet variations in this range. 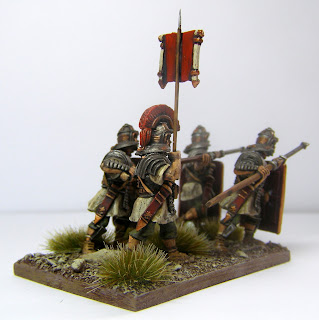 Gordon deliberately went with a very grubby "or campaign" style, a good call! 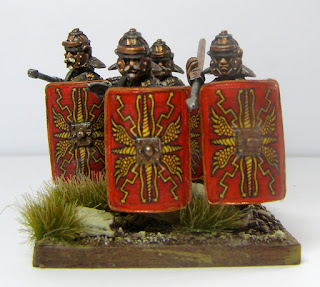 The below pic shows how animated the minis are.  I usually go with very static poses, but the below looks brilliant!

And now, all together.

I also have bought enough minis for a couple of units of these, but they are resting in a box whlst I finish up basing all the BTD minis that have been painted, and rest in storage.  And yet, these minis are several orders of magnitude better sculpted than the BTDs; I really should get on with them!
Posted by BigRedBat at 15:28 16 comments:

I've finished Cohort I Gallorum, and the repaint/rebase of Cohort II and the Equites (mounted contingents) of both cohorts.  I scruffed the shields up a bit, too.  All pics clickable!

Below is a view of the cohorts from the rear.  These are cohorts of Gauls, and accordingly I've tried to give each a mild gallic flavour with boar and cockerel standards, and chequered cloaks.

Below is a closeup of the cloaks, I gave around 1/3 chequers.  I also went with different shades of metal in the helmets and muddy cloaks. 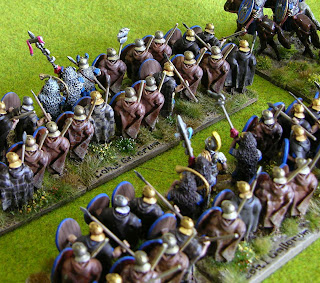 All the minis at Black Tree, and are not too shabby, given a little careful painting.

These are part of my continuing auxilia project- I'm now up to 10 auxiliary cohorts, more than half of what I need to re-fight some of the larger battles of 69/70AD.  Hopefully I'll have these and a few more cohorts to parade on Bastille Day (for Greg's Big Parade).  I'm currently working on an ala of cavalry.
Posted by BigRedBat at 23:38 10 comments:

Not my Middle Imperial Romans

These figures were splendidly painted by Richard Tartt, who has kindly sent me photos that I could post on t'Blog.  They are of some of the beautiful A&A Miniatures range sculpted by Adam Smith (now of Aventine Miniatures).

The armoured archers have bags of character, and are beautifully painted, with added bowstrings. 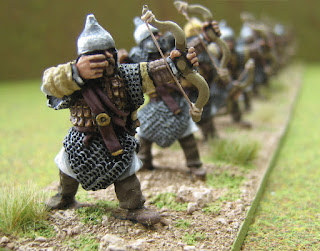 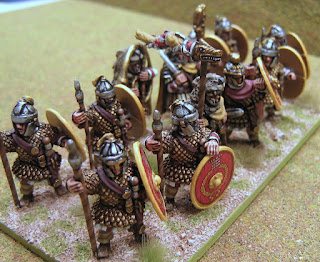 I think these are from the A&A 4th Century Range.  I do love the scale armour. 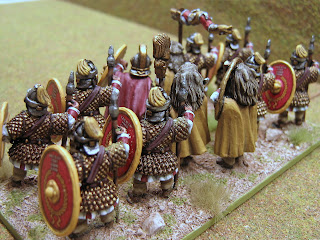 Finally some archers supporting some more legionaries.  I like the red-painted rawhide edging on these shields, an idea to nick!   ;-)   Richard's basing style is very effective. 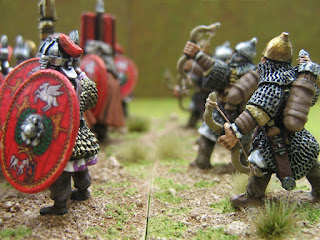 Thanks for the lovely photos, Richard!
If anyone else who doesn't run their own blog, would like me to host pictures of their ancients minis, please do drop me an email at the address above.  Cheers, Simon
Posted by BigRedBat at 09:43 14 comments:

Just a quick WIP shot, the new 24 are coming along nicely, and I've substantially retouched the other 24.  Hopefully basing tomorrow.