The Battle of Ceresole 1544 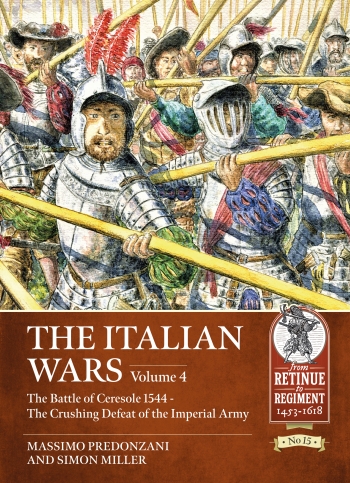 I've long been a fan of Blaise de Monluc, an indefatigable Gascon who, as commander of the French enfants perdus, played a critical role in the Battle of Ceresole, 1544, a major engagement in the Italian Wars. His captivating account inspired me to research the battle, reviewing the various original accounts (some of which were kindly translated for me from French, Spanish and Castilian by my French friend Loic) and the surviving terrain features to (I believe) accurately place the battle in the countryside to the west of Ceresole d'Alba. I have come up with a reconstruction of the battle which differs in several respects to the well-known account by Oman in his "Art of War in the Sixteenth Century."
When I heard that Massimo Predonzani was revising his 2012 book on the battle for publication by Helion, I got in contact to share my research. I was delighted when he invited me to rewrite the chapters relating directly to the battle, to include my theories and other information that I'd come across. I've written about the skirmish the day before the battle and extended the chapters that recount the battle itself. I've also designed four diagrams that show the deployment and manoeuvres of the two armies during the battle, and discuss the importance of artillery to the outcome of the battle.
Ceresole is a fascinating engagement that will transfer very well to the wargames table (I'm working on a TtS! scenario). The book has now been published and can be purchased at:
https://www.helion.co.uk/military-history-books/the-italian-wars-volume-4-the-battle-of-ceresole-1544-the-crushing-defeat-of-the-imperial-army.php?sid=5a8dfb8edc98b0aacdff5e88bab405b9
It's currently on promotion!
Posted by BigRedBat at 12:05 3 comments:

Email ThisBlogThis!Share to TwitterShare to FacebookShare to Pinterest
Labels: Ceresole 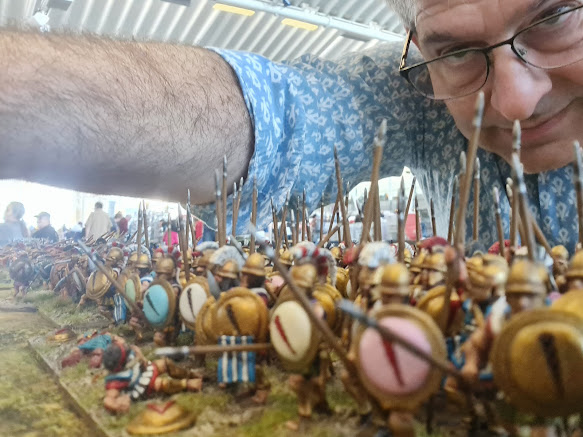 The weekend before last I took the Second Battle of Mantinea (362 BCE) to SELWG, and I have finally found time to post the images! Above, that's me looming like mighty Zeus above the extra deep Theban phalanx. (All pictures are clickable).

Here's the deployment, with the Spartan/Mantinean/Athenian force (lower left), drawn up in front of the Pelagos Wood (where many of their soldiers were enjoying a late breakfast). The Thebans and Tegeans are at the top right. The battlefield is 3m wide.
Below is the deployment plan from my current scenario, which I will likely revise when I receive the Society of Ancients Battle Day pack for their event in March. It gives a super game! 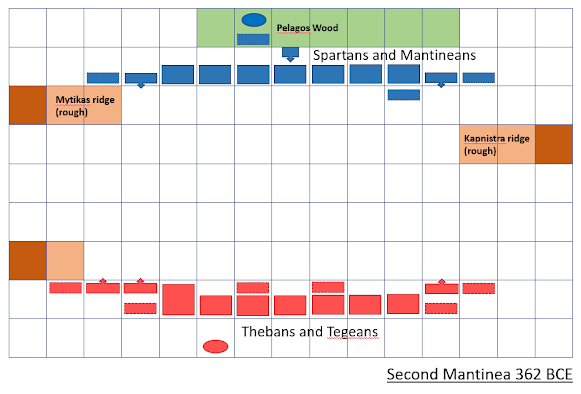 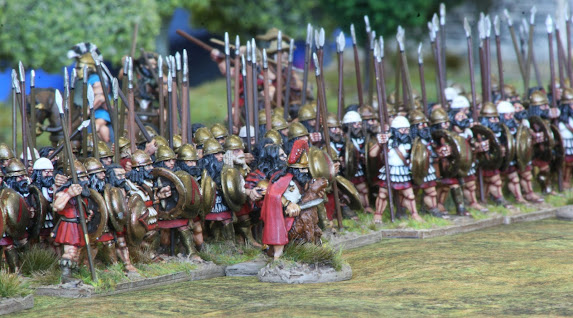 Above is a photo of the Spartans, and below of some Thessalian cavalry from the Theban army. 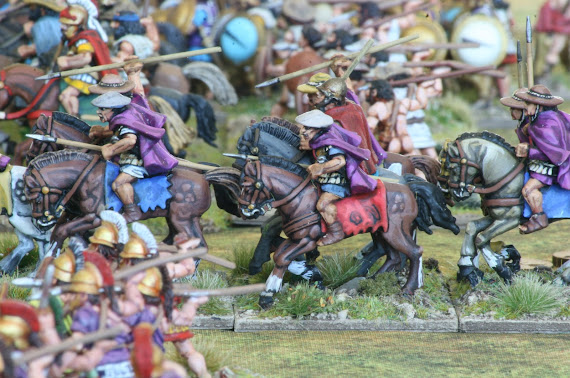 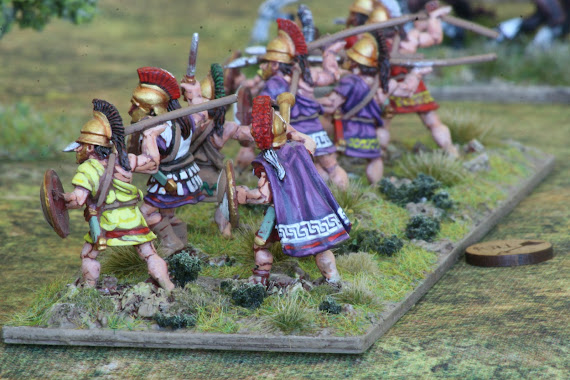 Above are some peltasts (possibly ex Steve Jones?). It dawned on me, recently, that I don't have nearly enough peltasts, and I'm currently raising several more units. Few will be as nice as the above unit, though! Below is the rear of the extra-deep Theban phalanx (currently 6 ranks deep- I'd love to add another rank or two). 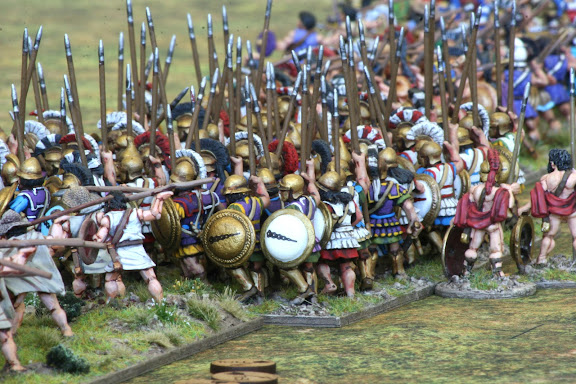 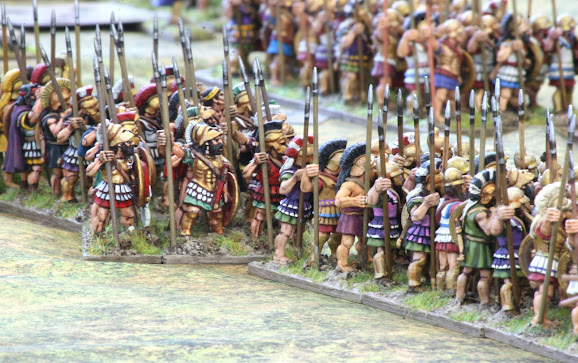 Here are a couple more shots of some of the Greek hoplites. These are mostly Foundry Athenians, lovely sculpts, beautifully painted by various people who are far more competent, than I. I'm planning to add another block this winter, from my "reserves" boxes. Below, the Spartans have been flanked and are in deep trouble! 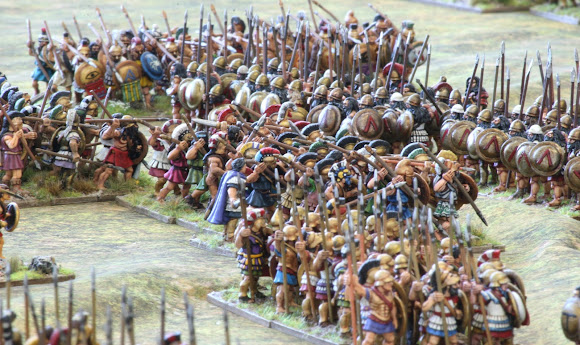 I was always a bit doubtful whether hoplite battles would work well on a grid, but they certainly do! We enjoyed a couple of cracking games, both narrowly won by the Thebans, and each in under two hours.
Many thanks to Ian Notter (who took most of the above photos), Tim Thompson, Shaun McTague and David Millett who helped to run the game. 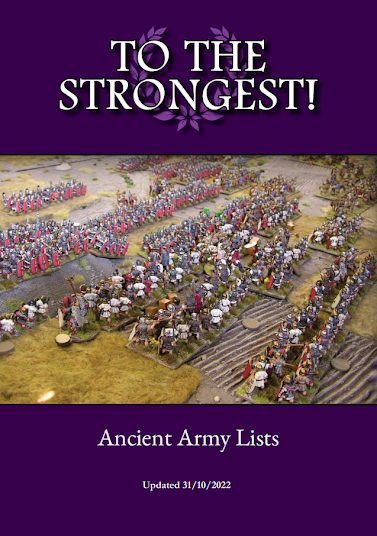 In other news, yesterday I published the latest quarterly release of the TtS! Ancient Army List eBook. This new release includes two new lists: Early Macedonian and Paeonian. I've also added historical backgrounds to the Illyrians, Huns and Gepid lists, and edited many of the other lists. There are now 160 army lists in the Ancient book, and 132 in the Medieval; when the next medieval release comes out, there might be as many as 300 lists in total.
Postscript- I've added a brief in-game video, here:
Posted by BigRedBat at 17:25 6 comments: