I'm near enough to completing the various projects for Salute, so have begun to make a start on my next project, which is a Cremona 69AD, for Partizan on 1st June.

In odd moments I've been preparing the figures for two 100-strong legions of Early Imperial Romans, which will form the core of Vespasian's army. I'm using the system I described in my "One piece at a time" article in Wargames, Soldiers and Strategy. I have bought around 110 of the figures, painted, in 4 different lots. A substantial contingent came from Legatus Hedlius; in fact they are on the header of his blog! All of these need new shield transfers, and some (but not Legatus'), need quite a bit of work to make them presentable. 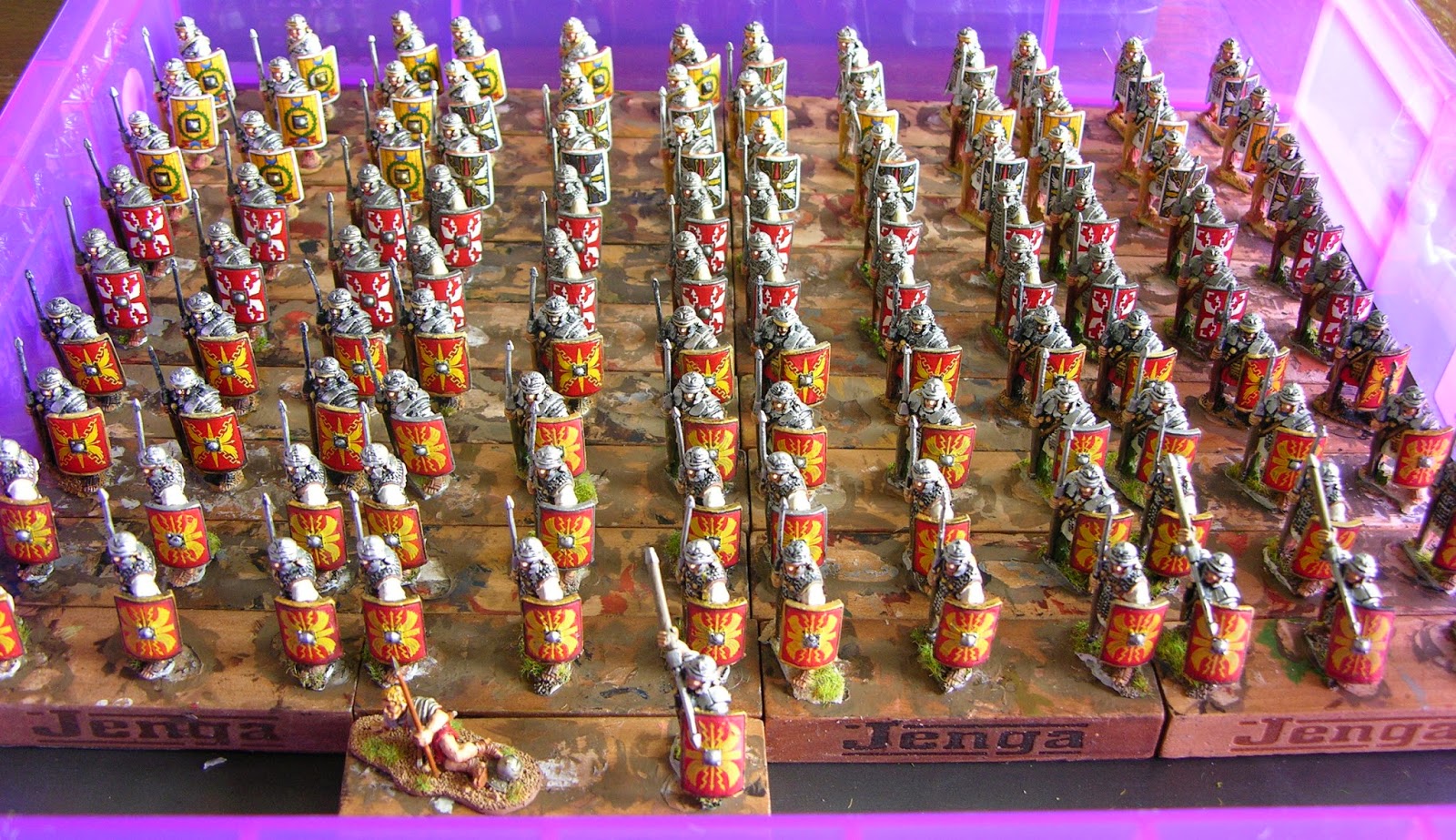 The balance of the required minis need to be painted from scratch, and are shown below. Almost all of the minis are Foundry Saleh's, but I've mixed in a few Black Tree, Aventine and Crusader and swapped a few heads to increase variety. I've  made a small start on the painting and shield transfers. One legion will have grey-black shields, and the other, yellow. 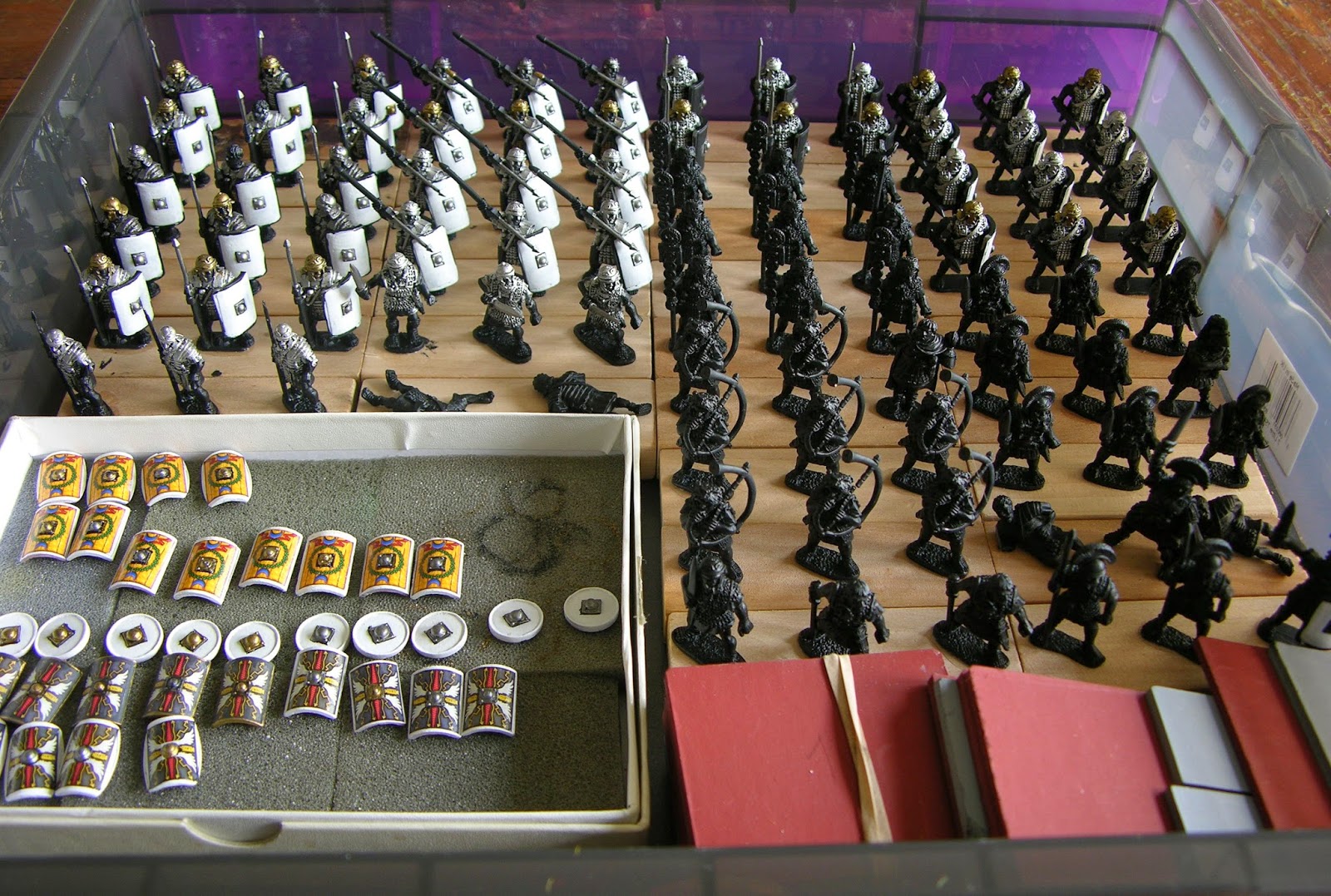 I have exactly 2 months to lick these into shape (whilst simultaneously building the terrain!). This should keep me nice and busy...
Posted by BigRedBat at 10:19 No comments: 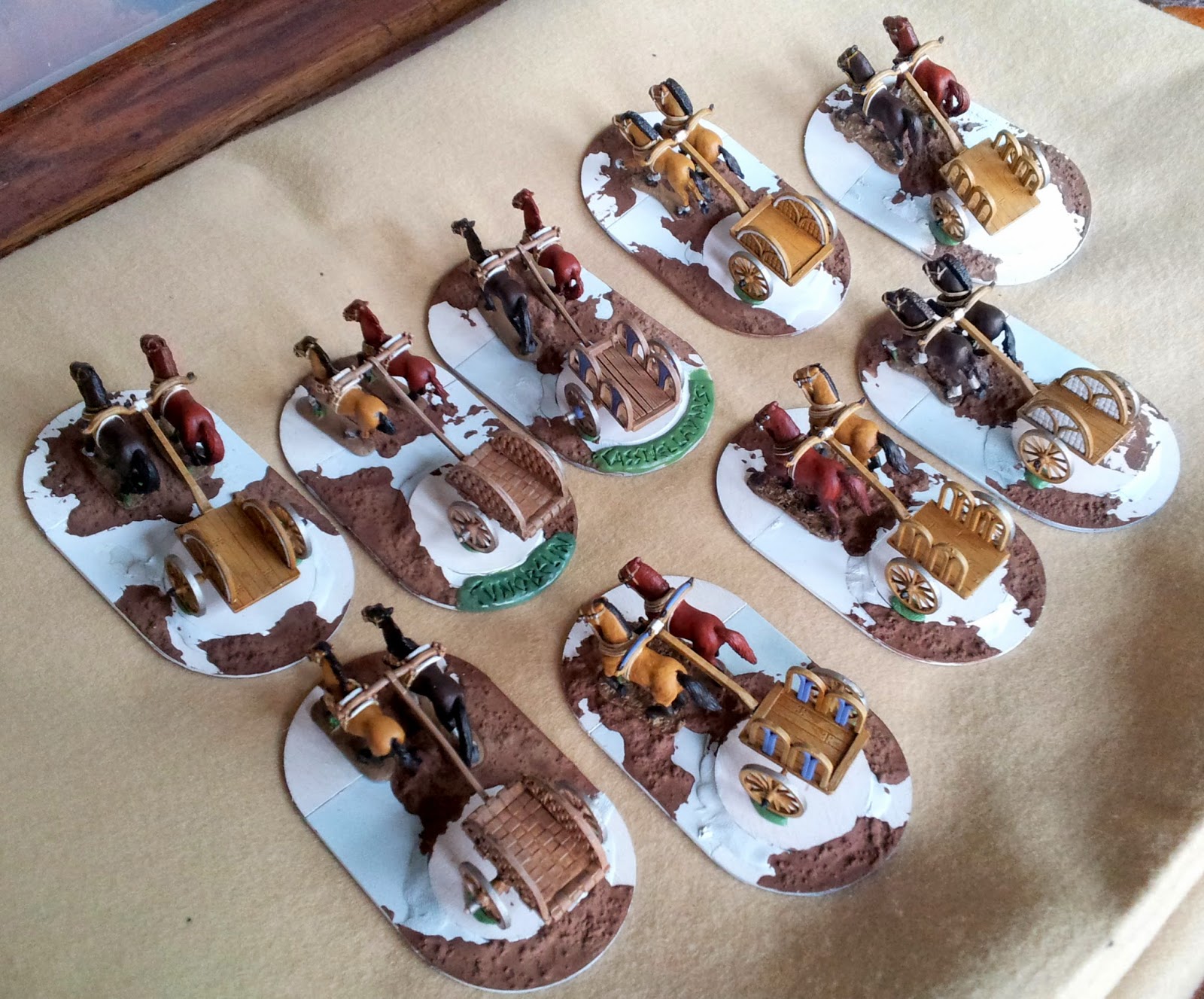 These are the second wave of my British chariots, partially based and assembled and almost ready for our game at Salute in just over two week's time.  Tonight I shall fit the crew, and texture the bases, and tomorrow start to paint and flock the bases.  I also need to paint 4 more crewmen (and, as you know, I hate painting Celts!).

At Salute the fine chaps from Wargames, Soldiers and Strategy, and I, will be on GE02, which I gather is just inside the entrance to the left as you come in.  Please do drop by and say hello!
Posted by BigRedBat at 15:27 No comments:

Email ThisBlogThis!Share to TwitterShare to FacebookShare to Pinterest
Labels: Chariots 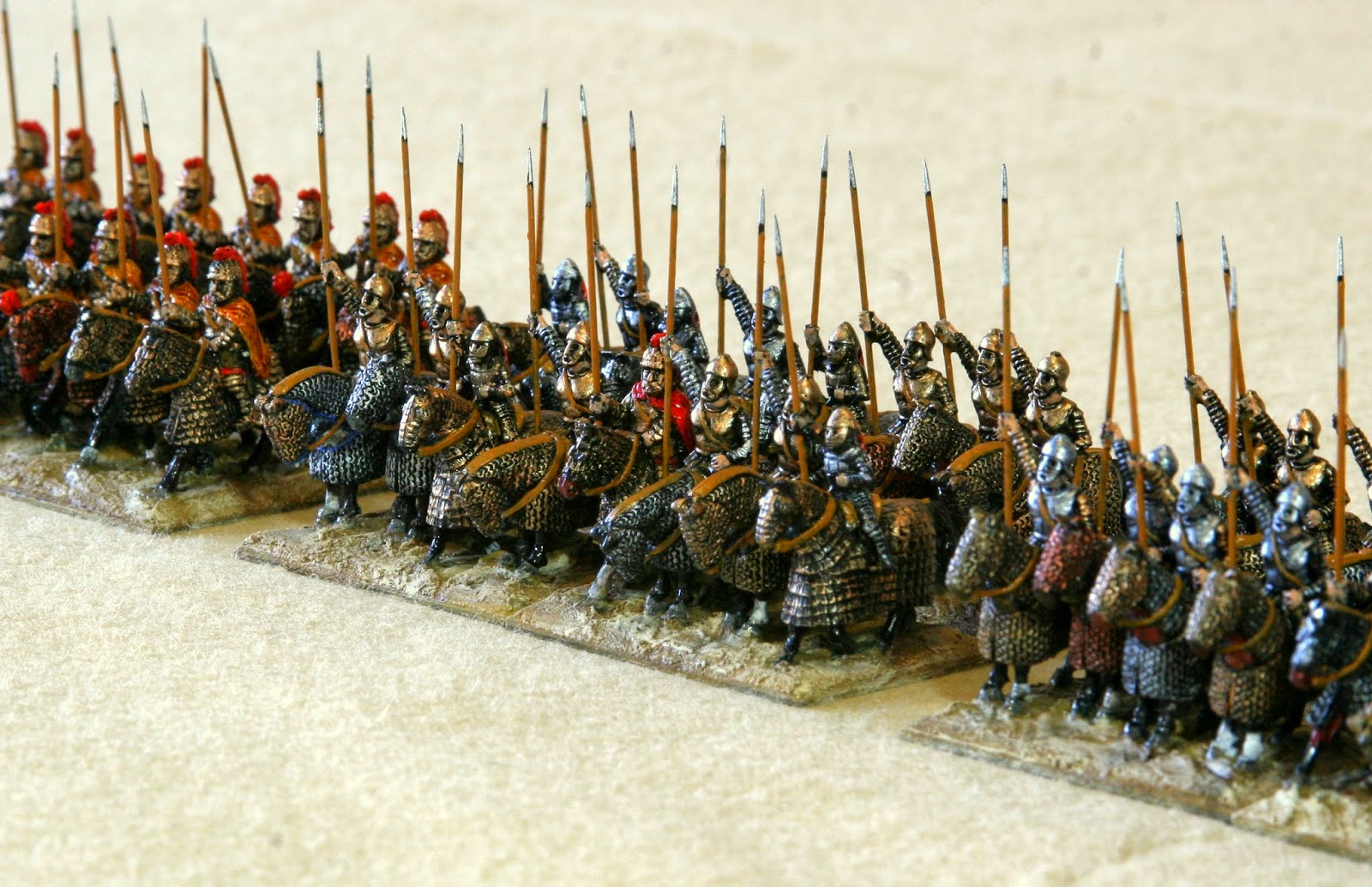 I thought I'd post another picture of Ian's 15mm cataphracts, that were on the edge of the shot yesterday. The central unit are Essex; nice minis!

I have recently recived some lovely "cats" from Keith at Aventine, alas I just don't have time to paint them, quite yet.  :-(
Posted by BigRedBat at 15:15 No comments: 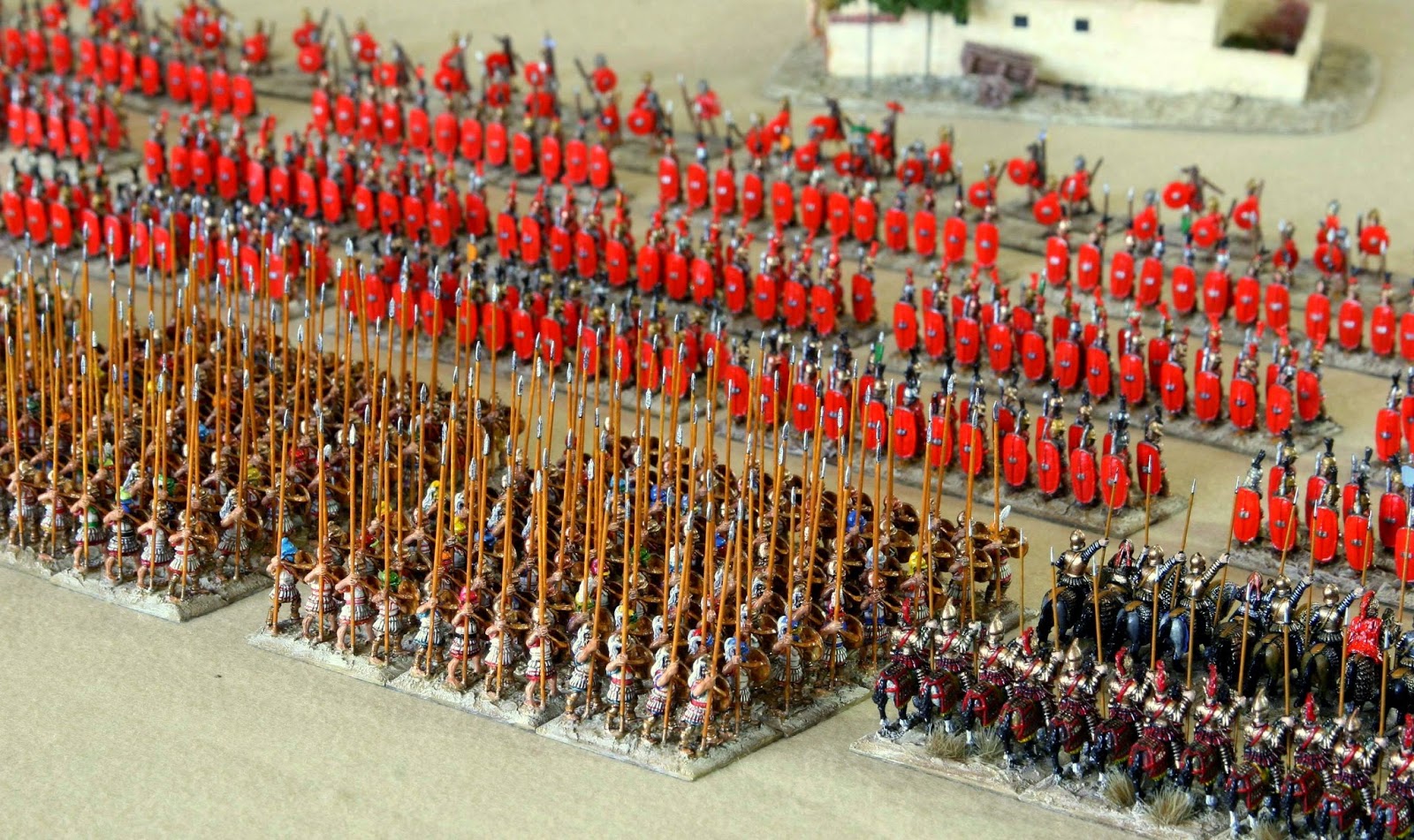 Mate Ian came around at the weekend, and helped me shoot some photos that will later be used to illustrate the rules that I'm currently developing.  The above shows his Successors attacking a Roman Consular army; cataphracts charge on the right!
Posted by BigRedBat at 12:18 No comments:

Mike at Relic has sent me a pic of a rather splendid unit of his Successor cataphracts that he has painted.  I saw some of these at Simon MacDowall's place.  Mike has caught the two-handed lance pose very well, and the horses are substantial Nisean chargers.  Very impressive! 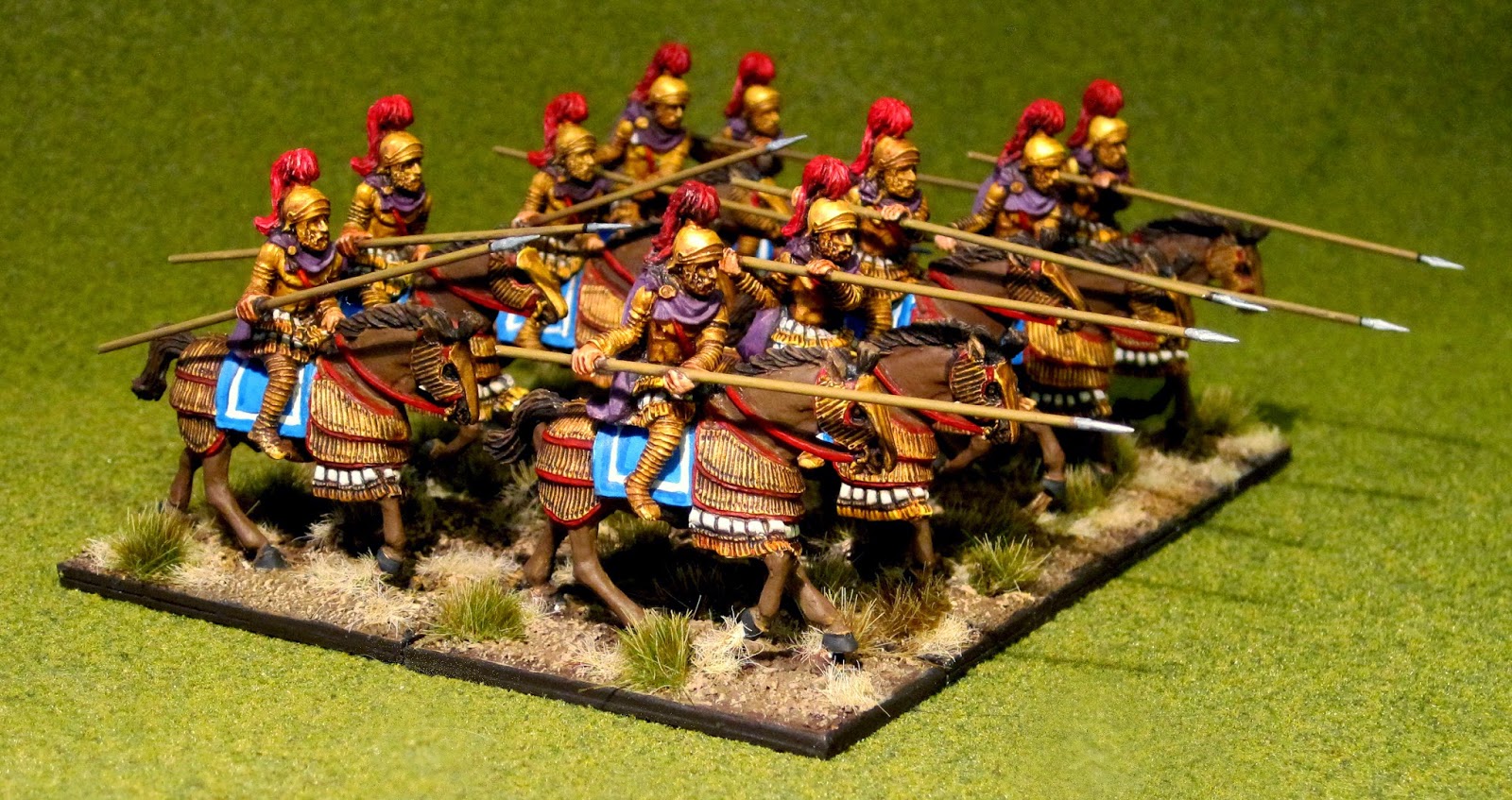 They are available here.

Posted by BigRedBat at 15:54 No comments:

I was also delighted that Wargames Illustrated arrived; not only does it include no less than four articles on Ancient Warfare, but one of them is my own!  The other three are by chum and author Simon MacDowall.

My own image has made it into the magazine, twice, as (strangely) has that of my Galatians, in different articles.  I am, however, wearing more clothes than the latter. The book I am reading in one photo is not the rule book, as suggested in the caption; I was actually quoting from a dog-eared copy of Polybius.  As you do...

Please go forth and purchase; I'd love to think they'll commission another ancient special!
Posted by BigRedBat at 17:15 No comments:

Legatus was asking me how I was planning to tackle the sails on my Swan-neck, so here we are!  Get them oars on, Legatus.  ;-) 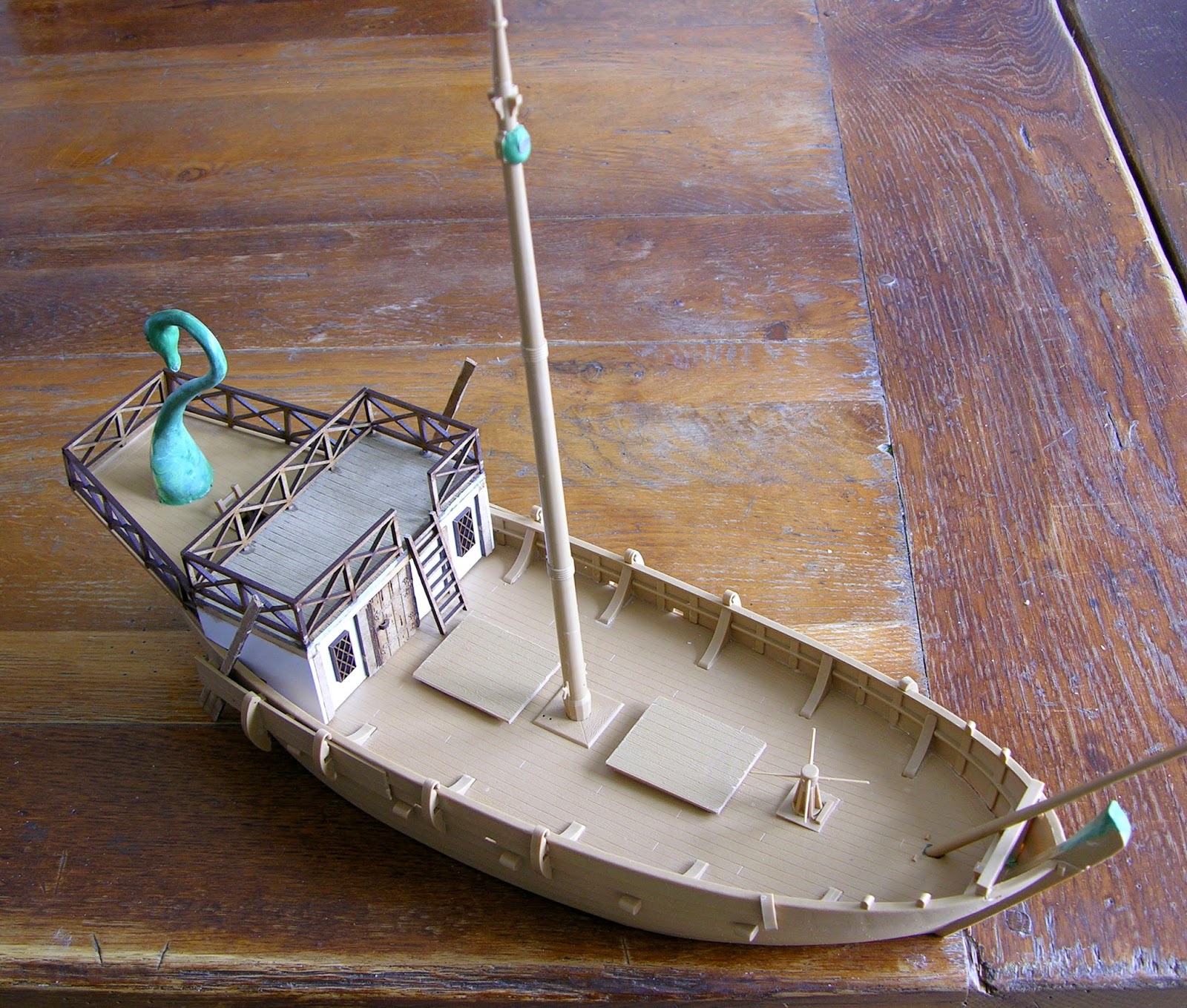 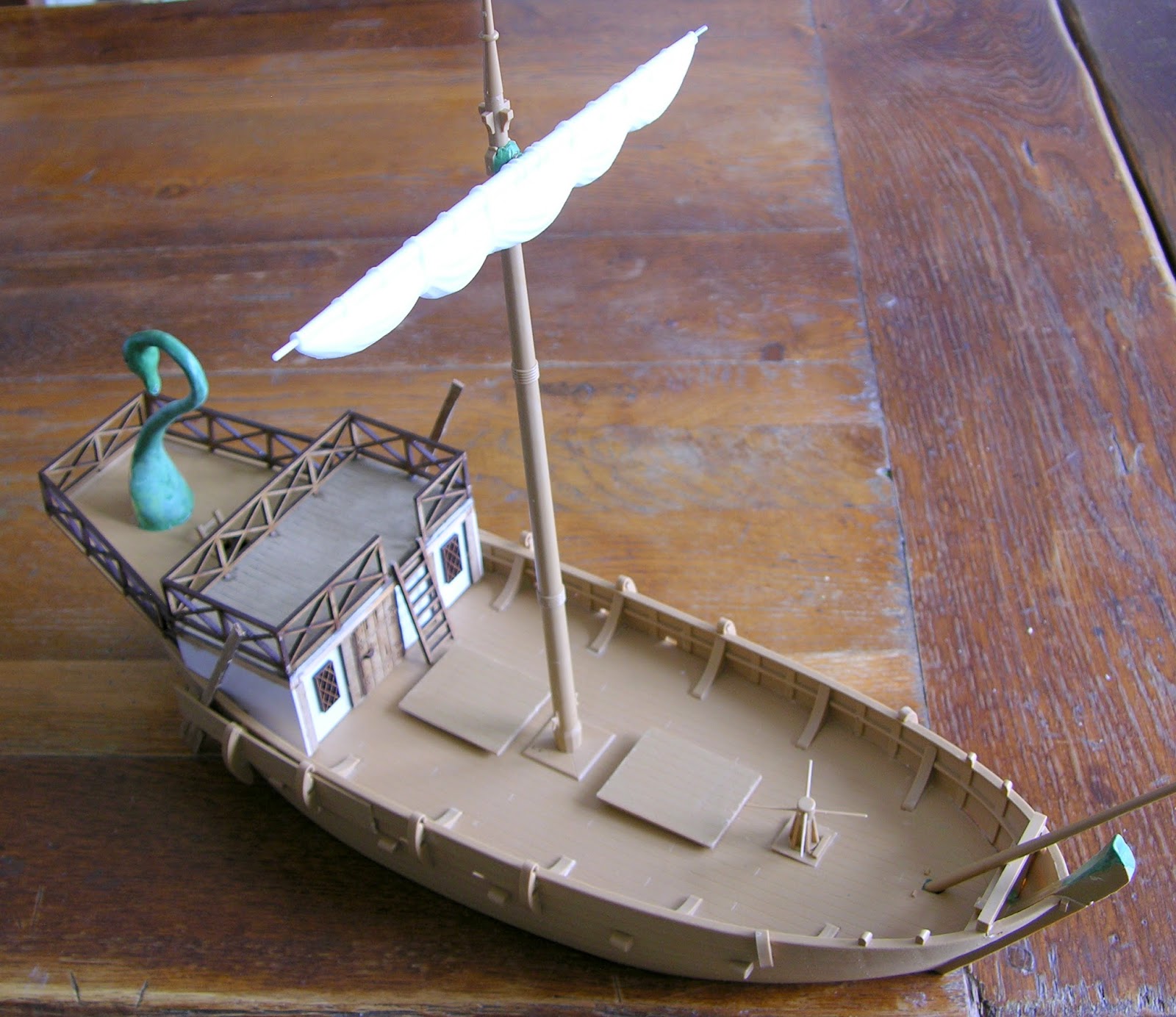 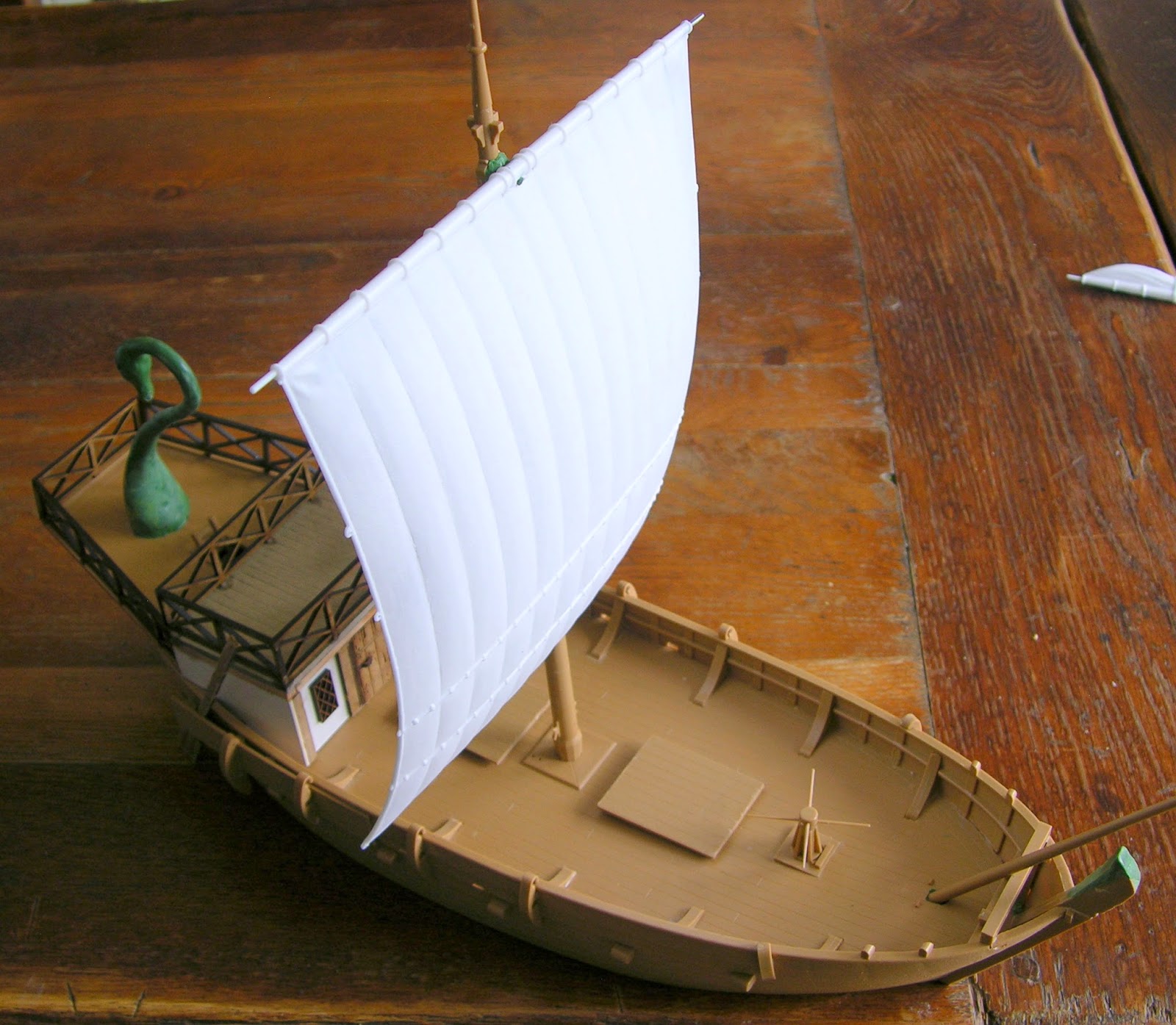 The sails are attached to small rare-earth magnets, to help with storage, and give me options of furled or unfurled (I have plans to use her in-harbour).  I need to think about rigging; despite storage issues, I might manage a few ropes.  The steering oars are also attached with rare earth magnets, for storage purposes.  I still have a bit of snagging to do, but the build is essentially done (which is just as well as I am very tight for time!).

Finally, a huge intercontinental thank you to Thomas Foss of Skull and Crown blog, who sent me the below resin cataphract liburnium.  This is exactly what I've been looking for as the basis for a scout ship, or Rhine patrol boat, and I've already been giving a deal of thought to how I'll convert/assemble it.

Thomas also sent me some of his lovely Napoleonic cut ply figures, which I look forward to painting in due course!
Posted by BigRedBat at 11:37 No comments:

This is an Essex-based British chariot assembly line, c.55BC, desperately building weapons to repel Caesar's invasion (at Salute in April). 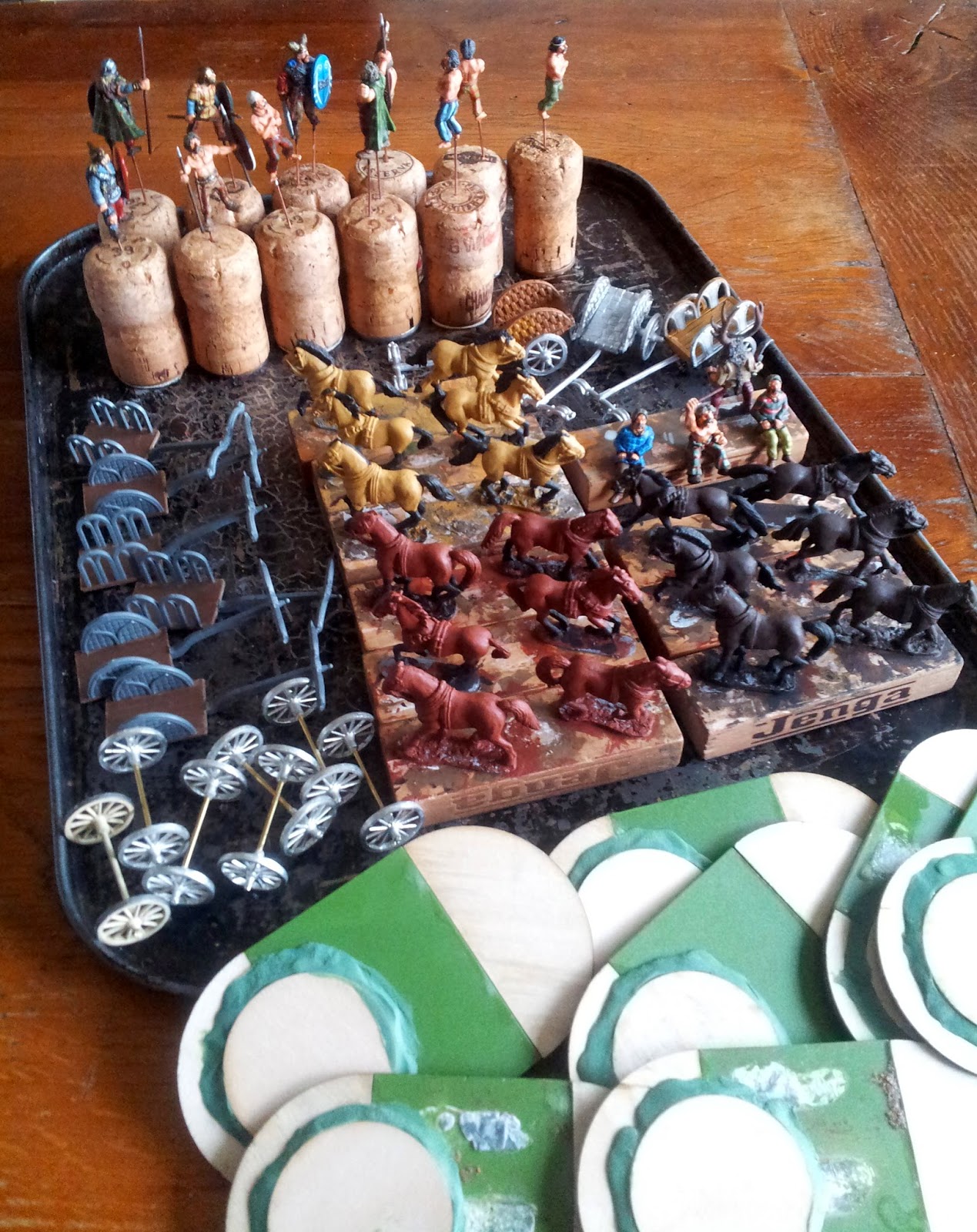 Mate Nick has sent across the charioteers, just in "the nick", as they say, and the chariots, horses and bases are also underway.  It is going to be a busy week or so!
Posted by BigRedBat at 13:48 No comments:

Here are a couple of snaps of the model I'm building for the Salute game I'm putting on with WS&S. 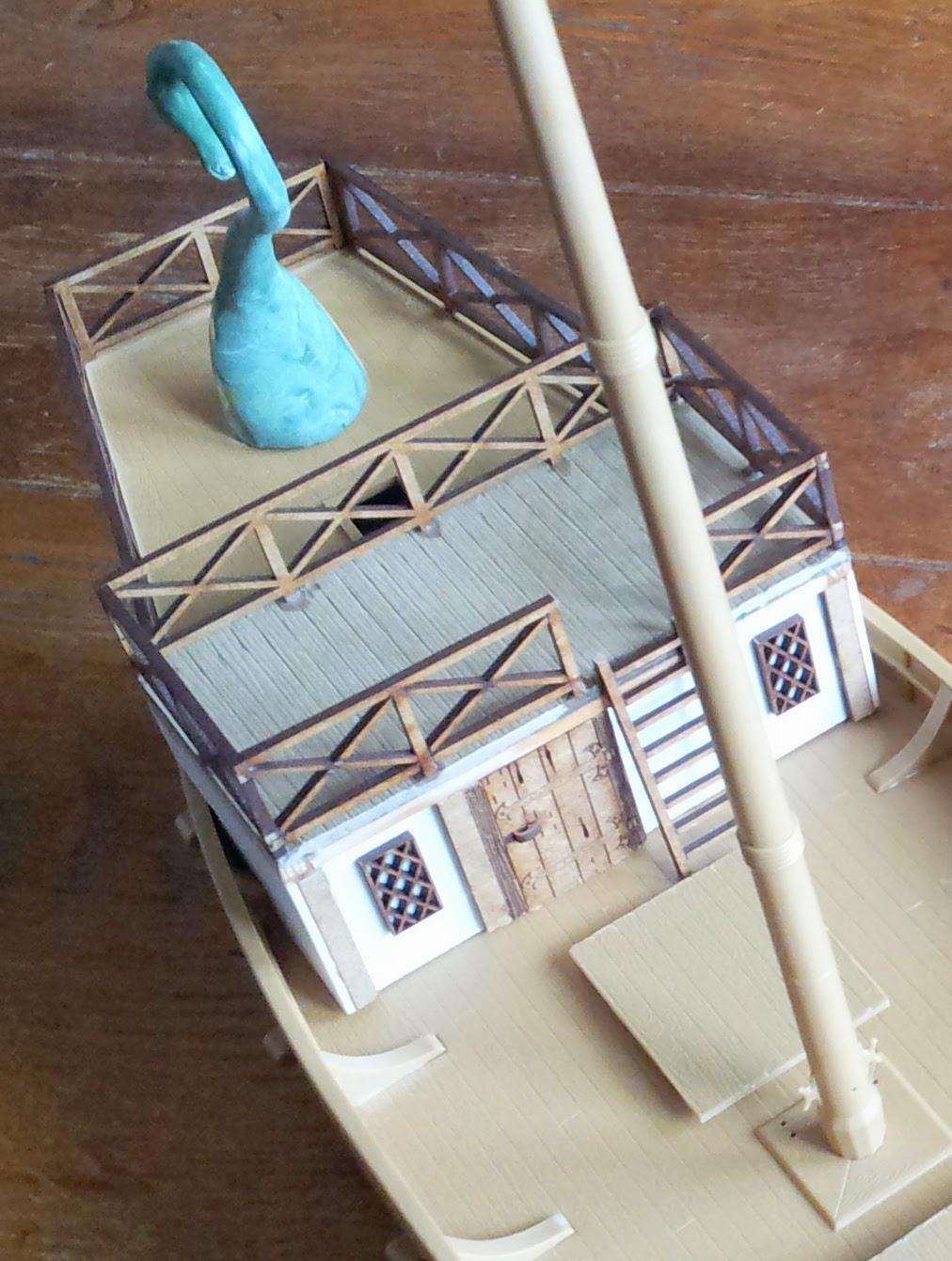 The model breaks down to fit into a Really Useful 7L box.  There's not a great deal more modelling to do; steering oars and sails, hopefully a single session of modelling.

Giraffe-necked, I hear you say?  I fear that I may have gone a little overboard with the swan...  ;-)
Posted by BigRedBat at 12:13 No comments:

Around six months back, I bought some very nicely painted minis from mate Redzedz.  Some I've put by for later projects, but there were enough (with the addition of a few figures I painted myself) to complete a couple more Gothic units.  All photos are "clickable".

Above are the warriors.  Several of them are deserters, or carrying captured Roman shields; I added LBMS transfers to several of the minis.  I went for a suitably irregular basing style, similar to that on the Celts.  Most of the minis are Gripping Beast, from a variety of ranges, but a few are Musketeer and one or two are possibly Westwind.

The skirmishers (above) also came out very well.  I added coloured borders on some of the tunics Shaun had painted, to match another unit I finished earlier, but I can't paint embroidery on them, as well as he can. 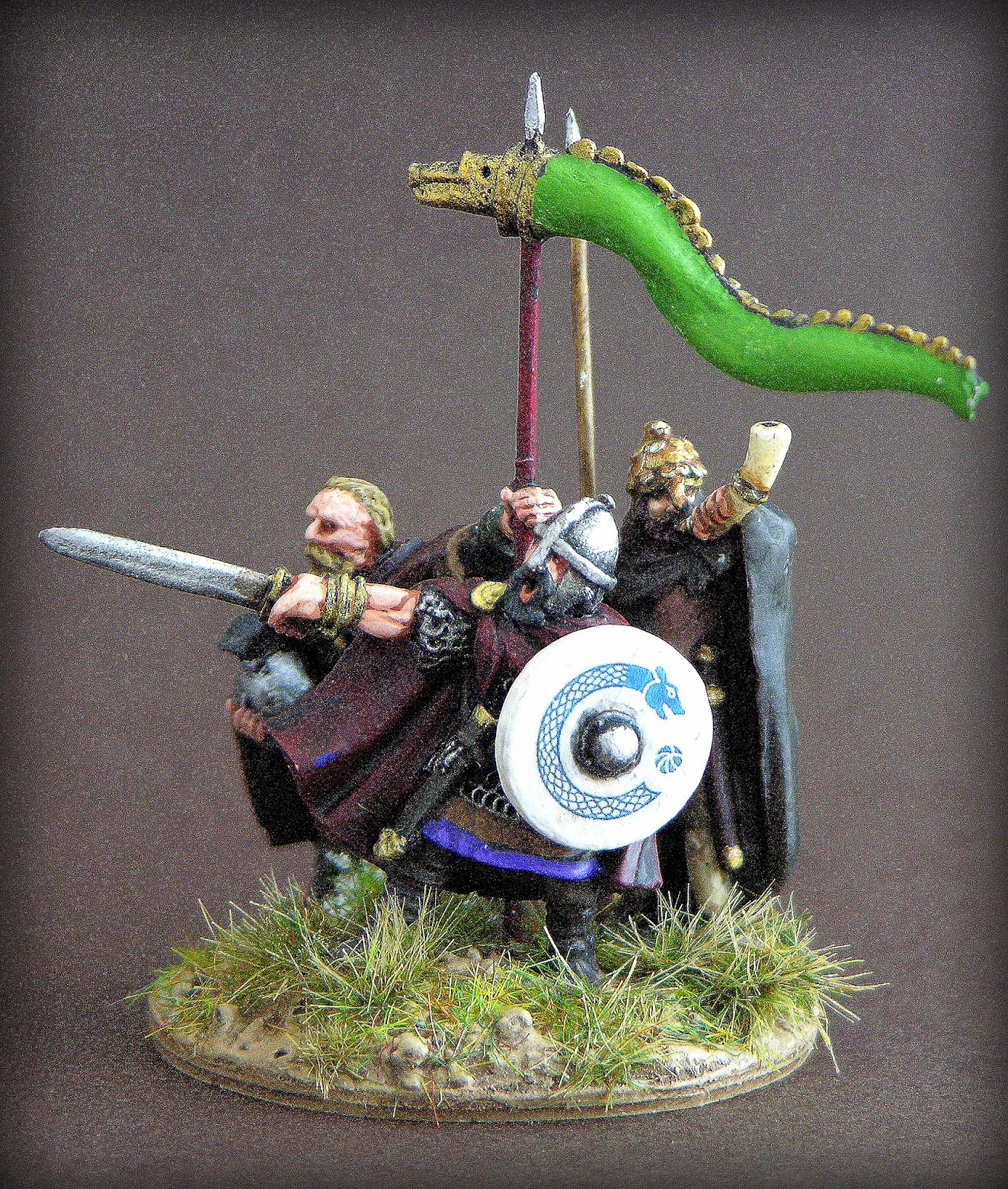 Finally, here is the war leader.  I based him at an angle, so that his sword would point upwards.  The shield transfer worked very well.  I might go back and add some detail to the draco.

These give me a total of 5 units of Goths; not yet an army, but definitely the beginning of an army.
Posted by BigRedBat at 12:26 No comments: 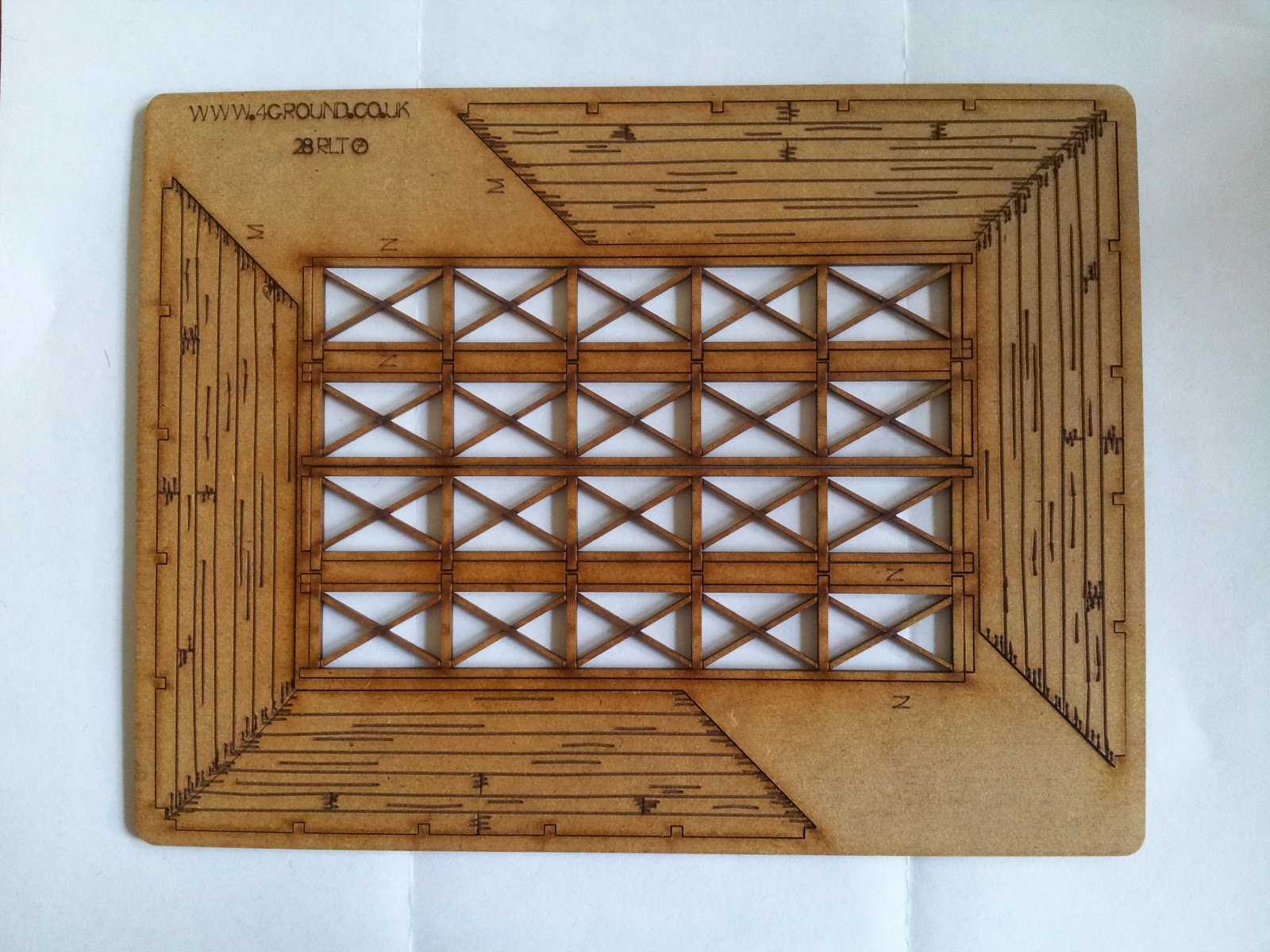 I received a long-awaited package from 4Ground, today.  This is a component sprue from their Roman watchtower, and I have great plans for it (and its fellows).  It was kind of them to do a special run for me.  Watch this space...
Posted by BigRedBat at 13:13 No comments:

Seeing the back of my Celts!

At last, the final warband is complete! Above are the backs of yesterday's nobles, and below the new unit of warriors. Most of the warriors in this new unit are Renegade Miniatures Celts, a fine range once the swords have been cut down or removed. Almost all are eBay repaints. The standards are a converted from an Aventine Roman one, and from part of a charm bracelet.

The chap front and centre appears to have suffered an accident (misplaced basing material from the original painter). I like to think that he has spotted a pilum coming his way!

I still have a good few chariots to sort, and, over time, I'll need to re-base my existing Celts to match the new basing style.
Posted by BigRedBat at 13:40 No comments:

This (clickable) photo is of one of the two Celtic units, that I've just finished.  In my rules, a Celtic player can choose to either have the nobles mounted (horses or chariots), or dismount them to stiffen one of the warbands, giving it a slightly higher save than the others.  This unit depicts said dismounted Celtic nobles and their retinue, which is why most of the front rank warriors are armoured. In use (tonight), there will be another 24 warriors behind this front rank.

This unit marks a departure for me, as the troops are all based on a single stand, 18cm wide by 6 deep. I've come to think that there's no point in basing Celts on smaller elements.  I mean, it's not like they are going to form column, to march up a road!

Minis are mostly Renegade and Black Tree designs, but with A&A shields with LBMS transfers. I painted half from scratch, and the others are eBay repaints.
Posted by BigRedBat at 14:45 No comments:

Whilst yesterday's celts continue their all-to-stately progress towards completion, I've started another project.

I needed some small Roman boats for several of this year's games. I couldn't find any custom-designed Roman boats*, and so decided to convert some existing models. I found some cheap pirate rowing boats for a modest £5 each, and bought 8. The irritating Celt is only present for size comparison purposes.

Unfortunately, the rowing boats have square sterns which are wrong for the period, so I sawed them all in half, glued the halves together, and disguised the joins, leaving me 4 boats around 20cm long. Later, I may add removable masts.  They'll do; their first outing will be Salute.

I have 8 pirate rowing boat sterns, going cheap, if anyone should need them!  ;-)

*at least ones that that I could afford
Posted by BigRedBat at 14:36 No comments:

Latest shot of the irritating Celts

Now partially based; the largest bases I've ever made, with 24 irritating Celts on each, and a few singly based irritating "heroes". 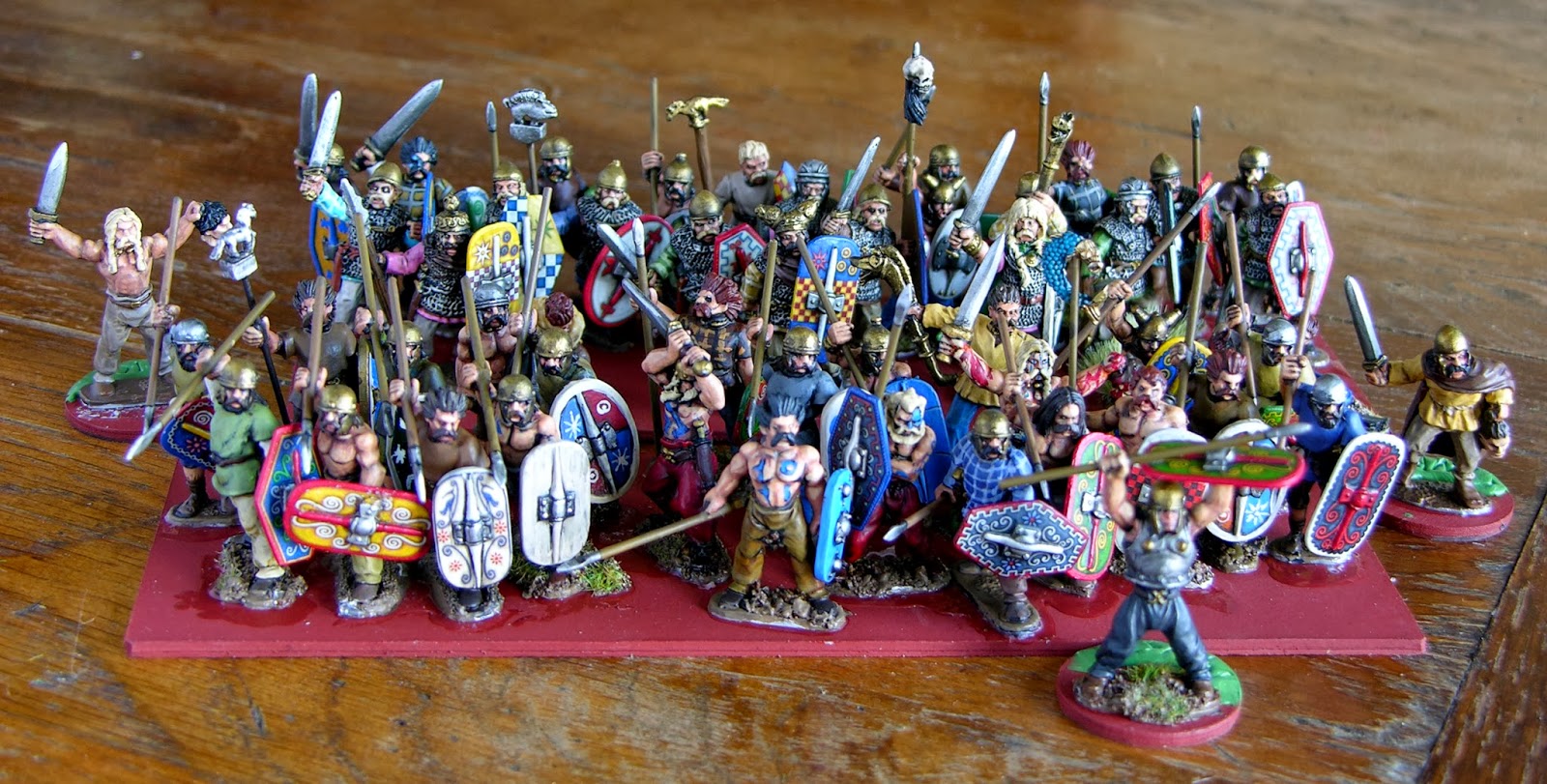 Did I mention that I hate painting Celts?
Posted by BigRedBat at 10:08 No comments:

I've made up shields for all of last week's celts.  I love the Little Big Man Studios transfers, in this case all applied on A&A shields which are delightfully thin.  Plus Steve is such a nice chap... and, in any case, I could never paint anything half as well. 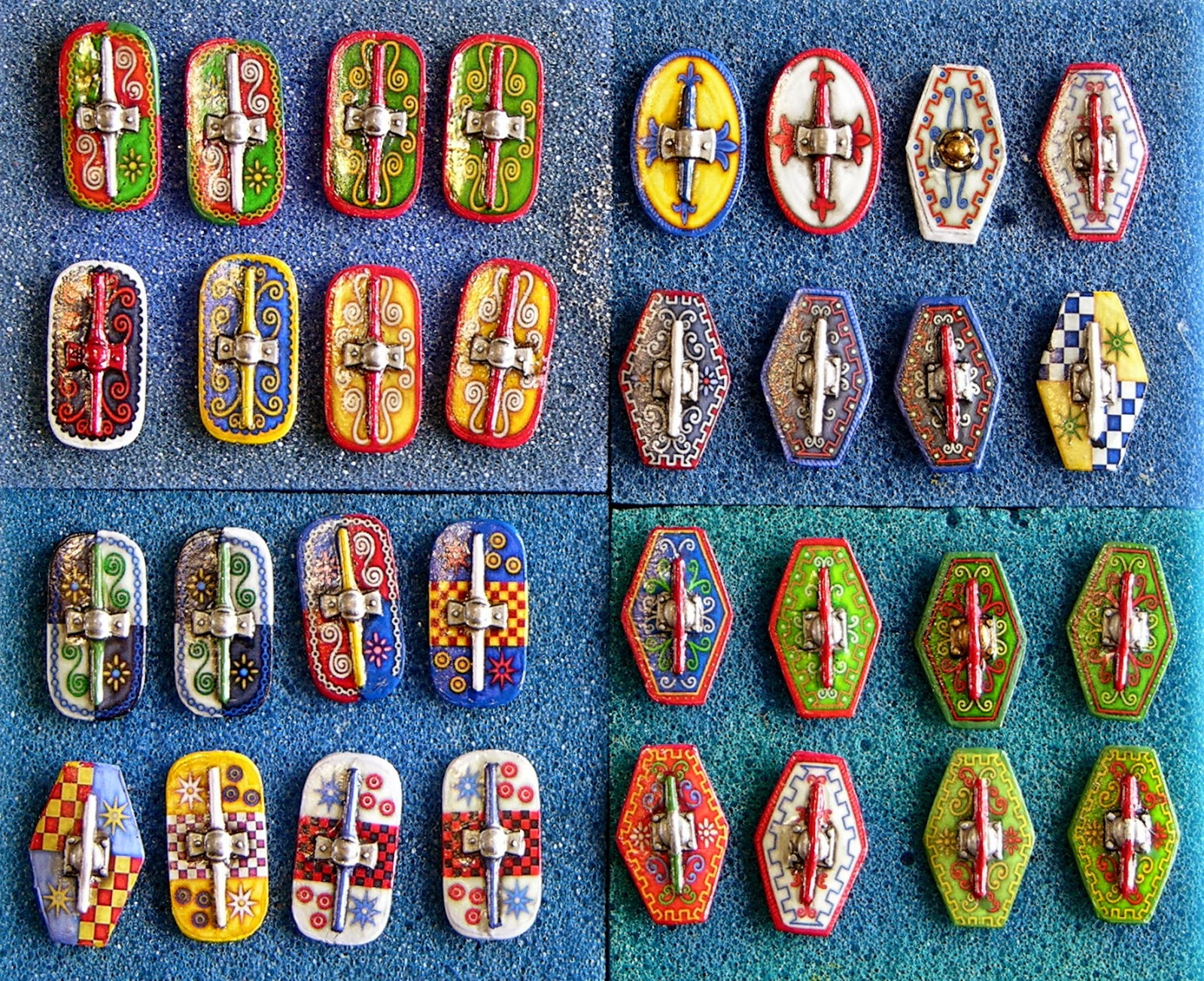 Hopefully I'll have time tonight to matt varnish, and also to do the metallic highlight on the celts.
Posted by BigRedBat at 15:52 No comments: