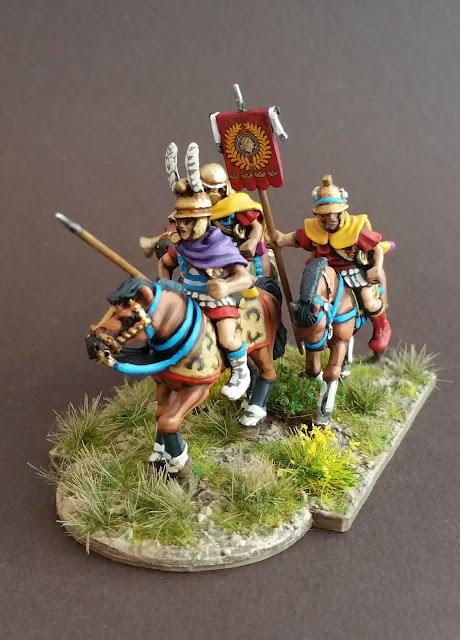 Here is the Seleucid Emperor, Antiochos Megas (the Great) for my too-big-for-Salute Raphia game. He will lead a bodyguard cavalry unit on the extreme right of the Seleucid line. He was painted by Shaun and he and his escorts are Aventine (although he rides a Foundry horse).

Mate Shaun McTague dropped off the last phalanx and cavalry unit for Raphia and Leuctra this morning. Now I just need to assemble, varnish and base them! Not a trivial undertaking... 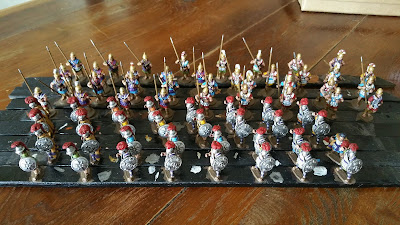 Above are the new Silver Shields and some Victrix Mercenaries, below is a close-up of the Victrix. I've given them metal pin spears which I hope will be durable. They will be mixed in 50/50 with some Lucid Eye hoplites that Shaun painted earlier; it'll be an amazing-looking unit. 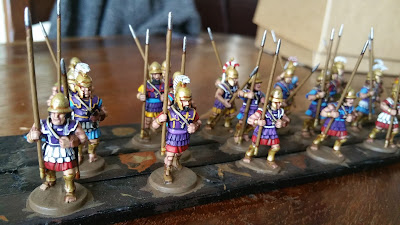 Posted by BigRedBat at 11:55 No comments:

Here's another unit for Raphia- this unit will be the left most infantry unit in the Seleucid force. These are Crusader later Thracians painted by Craig Davey. My only intervention with these was to add flock and dry-brush the bases.
Posted by BigRedBat at 11:09 No comments:

Email ThisBlogThis!Share to TwitterShare to FacebookShare to Pinterest
Labels: Thracians

Here are a new unit of thureophoroi for Raphia. The minis were painted by Craig Davey- I have just replaced lead spears with the ubiquitous North Stars and carried out a little work on the bases. Nice models from Aventine!
Posted by BigRedBat at 09:40 No comments: 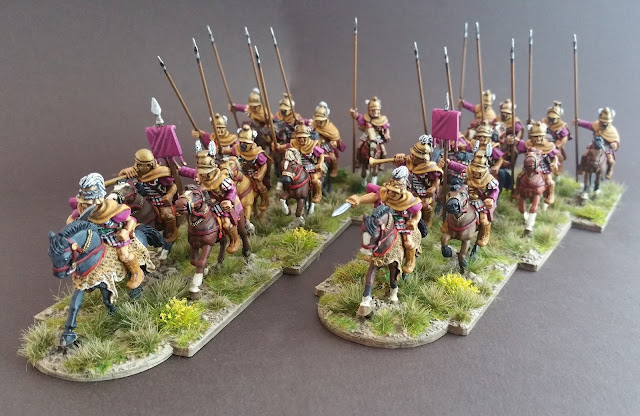 Here are another two regiments of xystophoroi for the big WHC Raphia game, bringing the total to nine. These will be on the Seleucid side; there is now just one regiment remaining to base. These lovely Aventines were mostly painted by Craig Davey, with a couple of extras painted by Shaun McTague. I retouched and re-based. They are going to hit the table tonight, I bet every card they play will be an Ace!

Below is another shot of Andrew Brentnall's 6mm Pharsalus game- this looks better each time I see it. I have a scenario written for this battle which I'll publish later on. 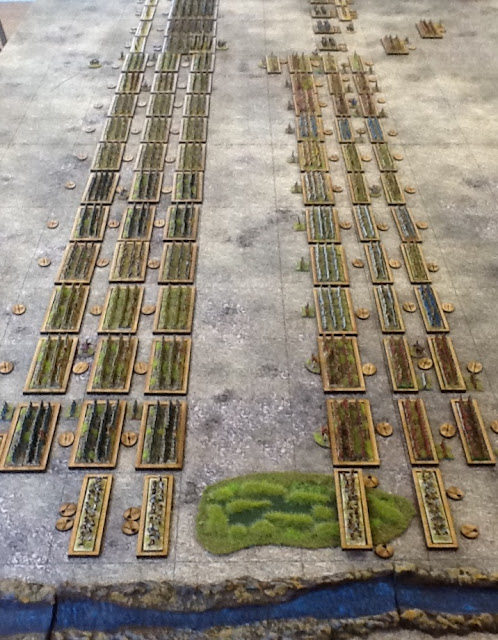 Posted by BigRedBat at 11:52 No comments: 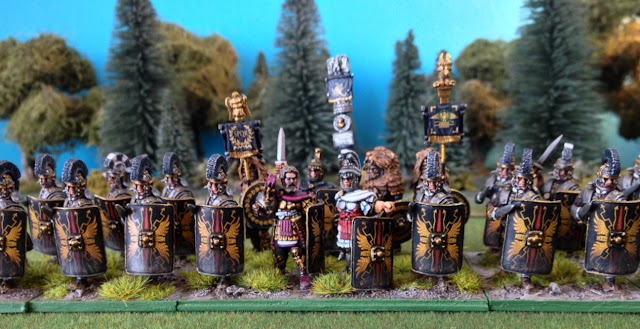 I recently bought a beautiful (late) Early Imperial Roman army from Aventine's Adam Smith and he has kindly painted up some further units to round it out. These are the Praetorians of what will be my third Early Imperial army (EIR3).

Like Adam, I love to see Praetorians with Black shields; very Hollywood!  These will hopefully see action later this year against a German army.

Posted by BigRedBat at 10:46 No comments:

Mate Andrew Brentnall will be putting on a spectacular Pharsalus game at the Society of Ancients Battle Day at Bletchley on April 2nd, using To the Strongest! and his lovely 6mm Romans. Below are pictures of an earlier test game; the final scenario is rather larger! 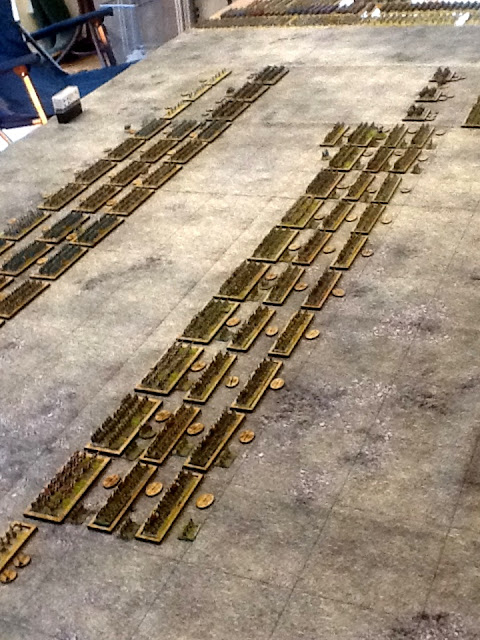 I am astonished how effective minis in the smaller scale look these days, especially used en masse in conjunction with the new cloth mats (these ones are the steppe design 10cm grid). Reminds me of that scene in Spartacus... 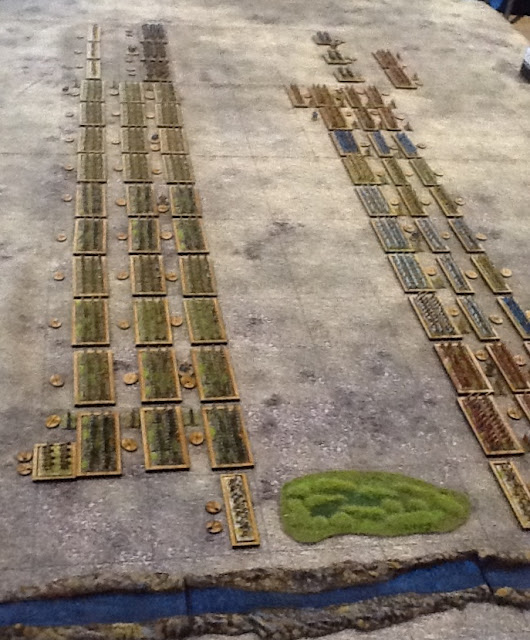 Andrew is looking for players so if you think you can make it to Bletchley for the day (it's always a very enjoyable day out) then please drop me a line (or leave a comment) and I'll put you in touch with him. I hope to be there myself to see how it plays out!
Posted by BigRedBat at 17:40 No comments:

I've re-based the Xystphoroi on the front of my rulebook (which was painted by Raglan) into wedge and added a second unit painted by Shaun McTague.  Shaun will shortly paint a third regiment to match. I really like the look of wedges for Successor cavalry. There will be seven regiments in wedge, two in rhomboid and four in line in the Raphia battle, for a total thirteen. 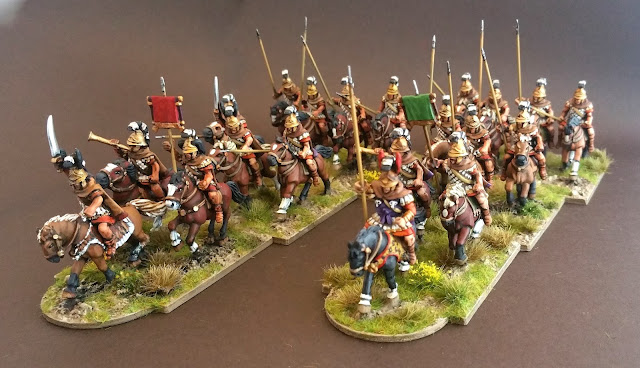 Both units are of Polemarch riders, sold by Gripping Beast, on Aventine Successor horses.  These are their older horse range- the new horses are slightly different but just as nice.  These units can be deployed in line or wedge as I prefer.

After Raphia I plan to add some Alexandrian companions, some prodromoi, some Thracians and a whole load of Persians to the mix, which will permit me to re-fight most of the  Successor battles.
Posted by BigRedBat at 17:21 No comments: 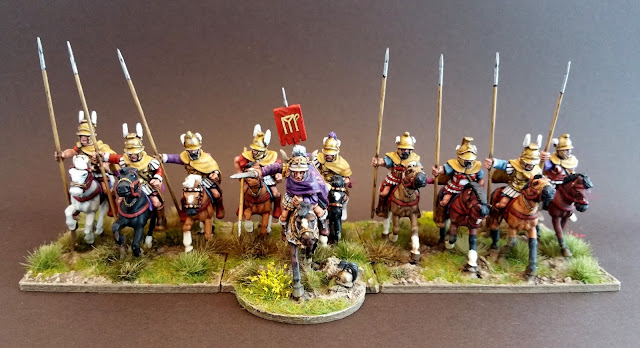 Above is Pyrrhus of Epirus at the head of his companions. Pyrrhus was the general rated by Hannibal as the second best of all time (after Alexander the Great), although he was slated by the Argives (boom boom!).

These are the superb Aventine Miniatures Pyrrhic range- super sculpts, especially the man himself at the front. Incidentally Aventine now stock my rules, should you want to add a set to your next order.

Pyrrhus was painted by Tilman Moritz of LAF and his companions by Redzed. The basing is a clever innovation of mine- the same minis can be deployed in line or wedge as preferred.

So why is Simon basing Pyrrhus when he should be basing Ptolemy, I hear you ask? Well the plan is to make duplicates of the central stand so that the same unit can be used in a variety of different battles each time with a different commander (Ptolemy, Antiochus, Eumenes etc.). This way I'll get maximum use out of the lovely unit! 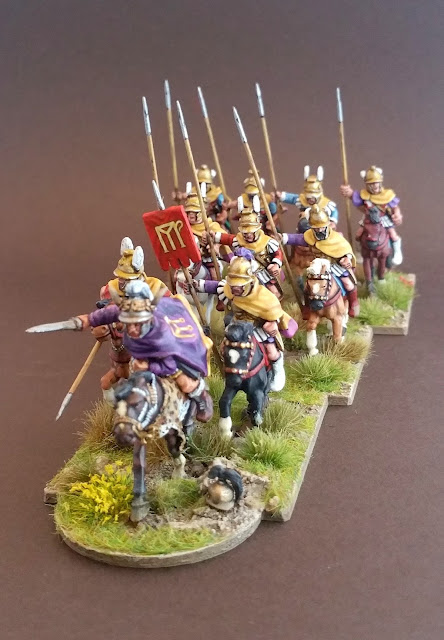 Posted by BigRedBat at 16:49 No comments:

Email ThisBlogThis!Share to TwitterShare to FacebookShare to Pinterest
Labels: Epirus 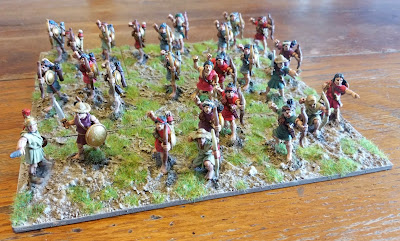 I had been fretting about not having enough archers for Raphia and my other games in April, so I finished and based up three new units (above). When I got round to putting them away, I realised that I probably hadn't needed to worry - I found no fewer than 15 units of Greek archers and slingers (below)!  :-) 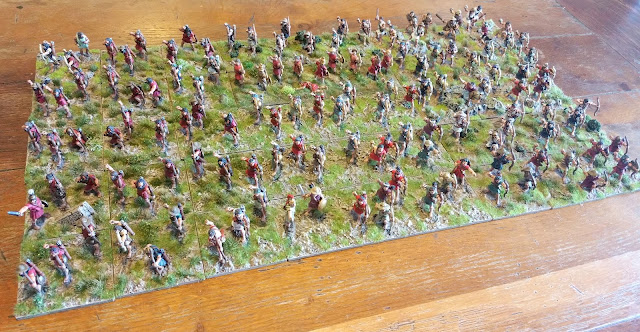 Posted by BigRedBat at 14:32 No comments: 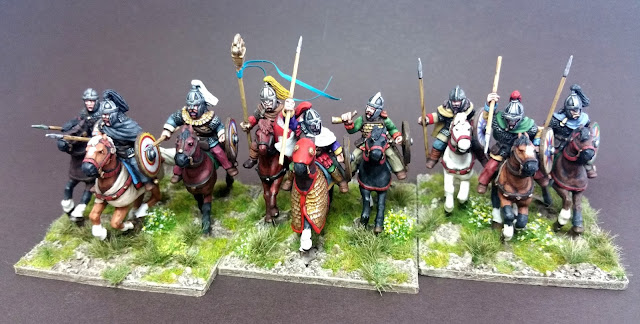 Here is Fritigern, Reiks of the Thervingi, and his comitatus. These minis were painted for me some time ago by Redzed Shaun, who did a superb job. I've only just got around to finishing the basing. The minis are all Footsore, ex Musketeer.

One day I want to refight Adrianople and these are just the chaps for the job! In the meanwhile, they will lead the Gothic charge at the Wargames Holiday Centre in late April.
Posted by BigRedBat at 14:47 No comments:

Email ThisBlogThis!Share to TwitterShare to FacebookShare to Pinterest
Labels: Goths

I've been working hard on the Raphia game and I thought it might be interesting to share the deployment plan (above, clickable) and for me to review what is left to do. The battlefield (including the dunes at the edges) will be fourteen foot wide. The Ptolemaic phalanx (and supporting infantry) will be 8' 8" wide (2.6m). I have the majority of the troops I need painted and based, but there is still a deal of ground to cover.

Troops not yet painted include:-


There are also the following to do- these are substantially painted but not finished or on based:-


Troops on bases but needing grout/flocking
When finished, these will add another 2' to the pike phalanx and 2' of supporting infantry to the host.


I also need to finish and base the following by the week after Salute for a Leuctra game; half of these are painted but most need spears, finishing and basing.


It's going to be a busy March and April!
Posted by BigRedBat at 11:41 No comments:

No, not ones made out of twisted straw but rather of tin and lead! 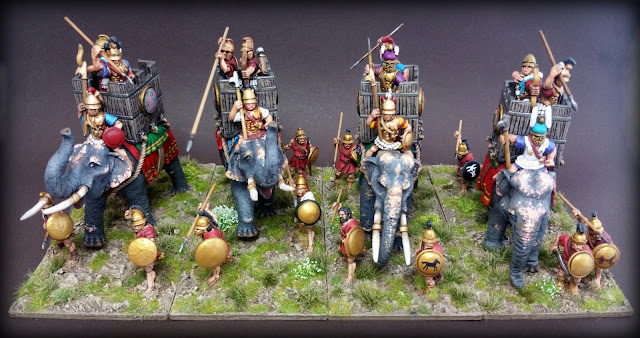 Here are the four new elephants for the looking Raphia Game. All of the elephants and most of the crew were painted by mate Shaun McTague although I added some detailing, notably the skin pigmentation, washes and based them. All of the photos are clickable!

Three of the elephants are superb Aventine Miniatures and the fourth (on the right) is a solid lead beast from Timeline Miniatures with an Aventine howdah and crew. She weighs an absolute ton! 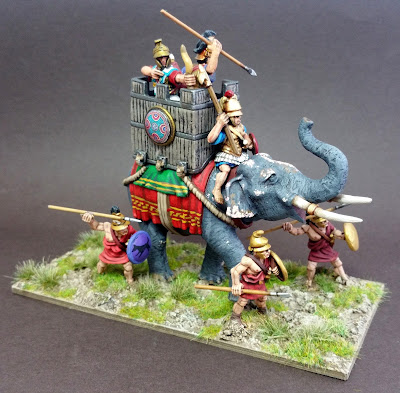 Above and below, Shaun did a magnificent job on the drapery. 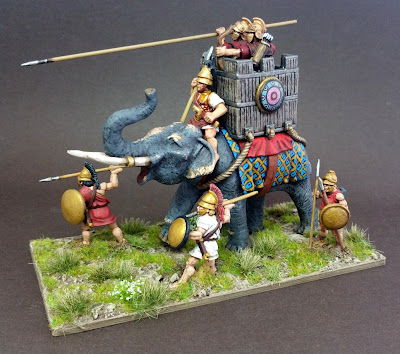 I have finished these with a Pyrrhic vibe- later I plan to get some specifically Seleucid armoured elephants painted up, with proper red ears. 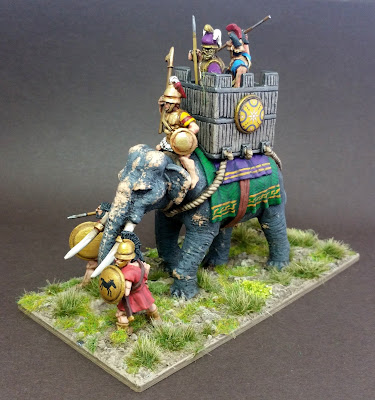 Above, Indian elephants tend to fade to pink as they get older; think bald patches. These are very old nellies, being part of Alexander the Great's own herd, passed down to Pyrrhus like family heirlooms through several generations of Successor owners. 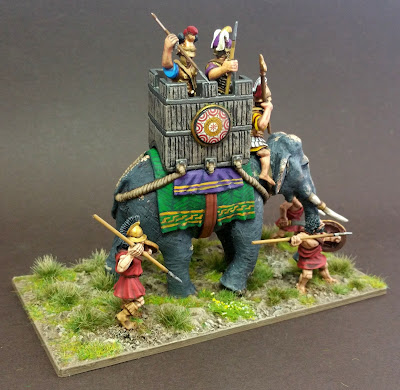 The elephants are escorted by Wargames Foundry javelinmen that I bought from Steve Marshall. 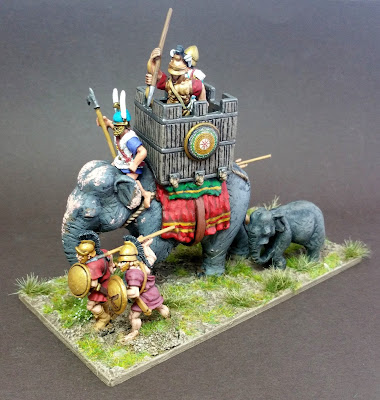 Last but not least the tusk-less cow (above) is a Timeline Miniatures model with an Aventine Howdah. I think of her as Mrs Jumbo and that is, of course, Dumbo behind her. At the battle of Beneventum the Pyrrhic elephants panicked after such a cow became concerned for her calf and rampaged back through their own lines.

There will be 11 elephants altogether in the Raphia game. Because there is no room for baby Dumbo at the Salute Inn, the battle will instead be fought exclusively at the Wargames Holiday Centre over the weekend after Salute (22nd-24th April), along with the Sabis (thousands of Celts; I bloody hate Celts!), Leuctra (with a spanking new Theban army), the vast Cremona 69AD game and a Late Roman bash. A weekend at the Wargamees Holiday Centre is a very fine experience, indeed, and Mark tells me he still has a couple of places left... you can book here.
Posted by BigRedBat at 11:12 No comments: