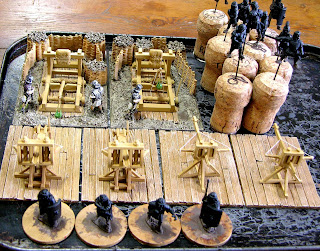 Latest WIP shot; bases are mostly painted, and should be finished tonight.  You can just make out the troublesome slings (still green) on the onagers.

I dreamed again, last night, of an even larger ballista; of which, more anon...
Posted by BigRedBat at 11:04 2 comments: A quick WIP shot of my siege train.  All the catapults are now strung and primed.  The 15 or so crewmen (not shown) have had their based trimmed off and have been primed (once painted, they will be pinned into the planking on the bases).  I've built up the soil around the bases of the onagers at the back with greenstuff, and will be overcoating with BigRedBatGunk later tonight.
This all took a surprising amount of time!  The slings on the onagers (can't be seen from this angle) took an hour or so, alone.
The Zvezda ballistae are superb models, my favourites at the moment.  I also love the anachronistic gabions.
Posted by BigRedBat at 20:20 6 comments: 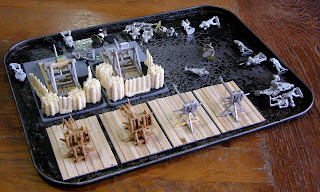 So there I was, getting ready to paint the command figures for my legion that I assembled last week, but instead, I've spent a week assembling 6 large ballistae, that I will probably never use in anger.
Front left are 2 beautifully detailed plastic models from Zvezda; to the right two heavy scorpions from BTD, and at the rear 2 whopping great onagers, also from BTD.   Some of the metal models had missing parts which I've replaced with matchsticks and greenstuff.  I've also mounted them all on coffee-stirrer planks, which should work for the field, or in towers.
The onagers are quite possibly later than my EIRs, but what the hell; I've added to the anachronism by placing them behind c17th gabions.  I mean, the Romans could have built gabions, couldn't they?  I'd imagine gabions would provide useful cover agaisnt counter-battery fire.  And they are lovely little resin castings which I have been itching to use.
Looking though my bits boxes, I have at least 12 more small scorpions and 6 small onagers.  I also have an old plastic 54mm Britains catapult that I intend to rebuild into a whopping great 28mm stonethrower.  Clearly I will need to work up some siege rules!
Posted by BigRedBat at 13:33 12 comments:

This weekend I've managed to finish the last 2 cohorts of my EIR Legion, the XIIII Gemina.  Above is the IXth...

...and here is the Xth.  All photos are clickable.
Both units are largely built of the same 3 poses of my favourite Saleh Foundry minis.  I painted half from scratch, and repainted the other half from an ebay purchase (I  notice that I still have a bit of snagging to do on a couple of faces).

...and now both together.
I am really delighted to have painted all the 240 legionaries; next I need to paint a few personality figures, some more artillery and the legionary cavalry, and then I'll have the legion complete and can take a photo.
Then I'll start another one.  ;-)
Posted by BigRedBat at 18:19 13 comments:

This is a lovely miniature that was generously sent to me by Hank of Gorgon Miniatures.  He is now Primus Pilus (senior centurion) of my almost-finished legion. 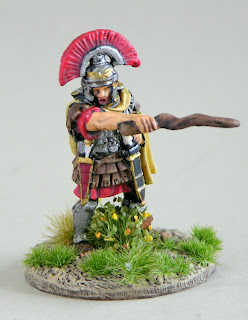 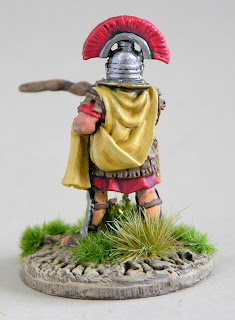 I'm very chuffed with him. Thanks, Hank!

I was casting the lead-mountain around for some personality figures for my legion, and I came across some lovely figures from Aventine's Republican range.  Luckily, Roman centurion and the standard-bearer gear didn't change much into the early Imperial era.   I've lightly converted these for what I need, by giving them Foundry standards and green-stuff lion skins, and replaced the centurion's leaf-shaped sword with a pilum. 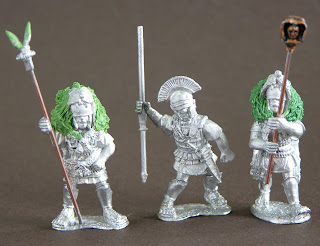 These are very classy figures which I'm looking forward to painting!
Posted by BigRedBat at 12:03 4 comments:

Whilst my final 2 EIR cohorts grind grimly onwards towards completion, I've started to think about the next unit I'll paint, a cohort (maybe two) of Praetorian guards. 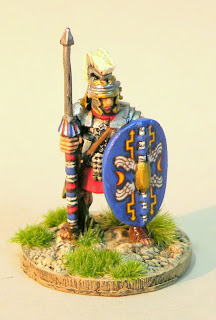 Most of the unit will be the Foundry Saleh Praetorian in the above pose, with a few other minis mixed in for variety; some surprises, I hope.  I've decided to paint coloured bands on the pila, as one sees bands on carvings of praetorians (I hope this is a wargaming first), and give him a white horsehair plume.  I'm a big fan of the LBMS shield design. 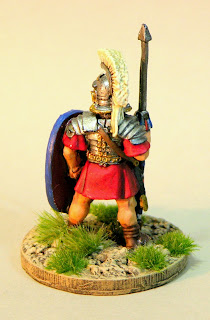 Here's the back; nothing controversial there.  I will go for red, as I think it is a suitably military colour.  I can see Praetorians wearing brilliant white for parades in Rome, but not out in the field.
If anyone has 8-12 of the above figures spare, I'd love to buy them or swap for them, as I'd really like to be able to paint 2 cohorts.
Posted by BigRedBat at 19:38 14 comments:

Email ThisBlogThis!Share to TwitterShare to FacebookShare to Pinterest
Labels: Praetorians 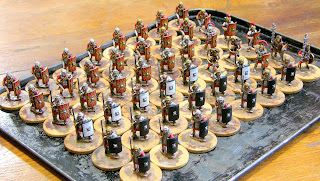 The last 18 minis are almost finished.  Above, I'm in the process of painting the black-primed shields white, ready to take the LBMS transfers.  I'll put a coat of varnish over the white, tonight, which will help the transfers to adhere.
I've been surprised how much more quickly I can paint the legionaries, relative to the command figures.  It's easy to get a production-line going with them.  They are lovely figures to paint.
I don't suppose anyone has a spare Foundry Praetorian standard bearer I could swap for,  please (for another project)?
Posted by BigRedBat at 14:45 6 comments: