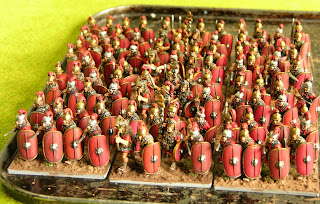 I've not posted this week, because I've been busy gaming and painting.

The paint-ees are above; 4 more cohorts of Caesarians, now partially based.  The minis were painted by Nick Speller, some by me and some repainted from eBay.  They blend nicely.

The game was with local mates Ian, Dr. Simon and Jay, and eldest Miller scion Harry.  We tried yet another rule-set I've written; this time a set of ancients rules on a single side of A4.  These "lite" rules enable a game to be played in around 90 minutes.  So far they seem very promising... and rather fun.

As I move steadily towards the basing stage on my Caesarians, my mind is turning to another project; an Early Imperial Army, with a twist. 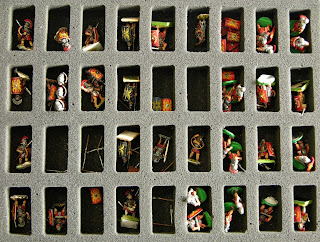 I've been buying up odd lots of Perry Romans, on eBay, and must now have a couple of hundred, all told.   The below are mostly from a single purchase, last week; a nice lot. 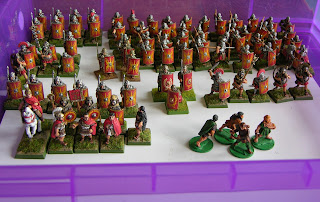 I have formulated a cunning plan for a project involving them, which will be the subject of a later post (and hopefully, in due course, a magazine article...).

Unusually today, I am sat in the executive lounge of the Antwerp Hilton and have a solid 9 hours to plug away at adding diagrams to my "To the Strongest!" wargames rules.
Posted by BigRedBat at 08:50 5 comments:

A tale of two Ptolemies

For last month's Raphia game, I found myself in the unusual position of having a commanding general too many. I never got around to posting the "finished" shots...

The first Ptolemy IV, below, is from Polemarch, kindly donated by Jim Clarke, who commissioned the range.  I put him on a Foundry horse, asked Nick to paint him, and gave him a couple of Polemarch aides (painted by Raglan), an Aventine Standard and a Salute-giveaway Punic military advisor (very kindly donated by Jeffski off the WD3 forum).  I named this Ptolemy the Effete Youth. 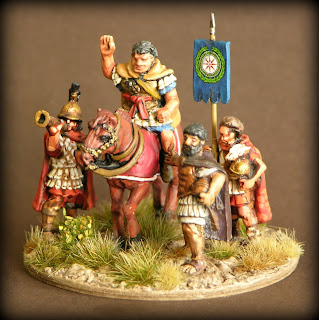 I also wanted a Ptolemy with more military bearing; after all he did lead the bodyguard cavalry, in the battle.  The Dashing Commander below is an Aventine, with a Polemarch standard-bearer, again both on Foundry horses and painted by Nick Speller. The eagle symbol was used by the Ptolemies. 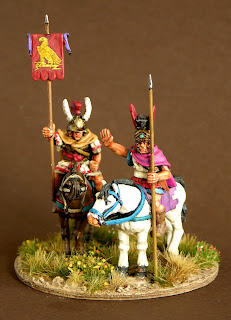 On the day of the game, I went with the Effete Youth, over the Dashing Commander.  The rest, as they say, was history...
Posted by BigRedBat at 10:21 7 comments:

I'm just finishing off the command figures Nick painted for me (foreground), and working through a group of unarmoured legionaries that will add variety to the legion.  I'm also painting my first Warlords- some casualties- nice minis! 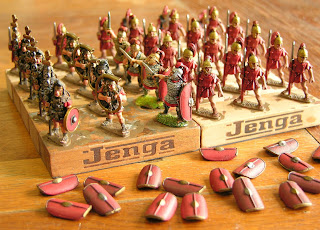 The red on the shields and on the unarmoured figures is mostly Halfords red primer, with washes of ink applied over it; I think they will look good, when completed (they are just blocked in, so far).  I'm going to use the Army Painter inks to add depth.

Posted by BigRedBat at 14:49 No comments:

I had a productive day yesterday, and the 90-odd legionaries above are now inked, varnished and highlighted.  The tarted-up eBay cohorts at the back now match Nick's at the front, much better.  Below, left, are Nick's command stands, and right some mere primed legionaries that I'm going to mix in, to add a little variety.  Red seems like a promising base colour...  I'm still mulling over what to do with the horses at the back. 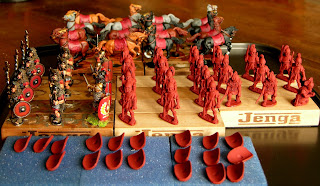 I've decided I'm going to base four cohorts in the first instance, and, after an interval, paint the extra figures for another two.
Posted by BigRedBat at 08:36 8 comments: 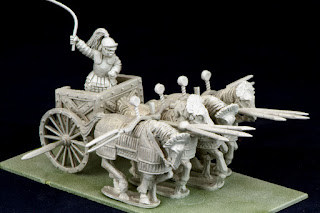 Jim at Polemarch very kindly posted me these pictures of his new scythed chariots, which I believe  will soon (but I gather not quite yet) be available via Gripping Beast.  They had a gratifying number of points and sharp edges, which is very nice as some previous scythed chariots have tended to be rather blunt instruments!

I shall be having at least a couple, once they come out.  I don't yet have a Seleucid army but I do aspire to a Pontic...
Posted by BigRedBat at 17:44 10 comments:

A quick WIP shot of the new legion that I'm mustering.  I've been doing my best to bring the standard  of the eBay milites (left) up to those of Nick's (right).  At least the shields match, now!
Posted by BigRedBat at 13:32 4 comments: 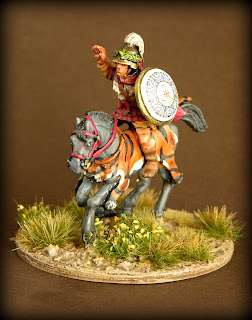 Nick did a fine job of painting this Foundry mini as the commander of the right wing Thessalian mercenary cavalry, for Raphia (I based and added a shield transfer).  In the original battle, Echecrates somehow managed to turn the Seleucid wing and made a valuable contribution to the Ptolemaic victory.  In our game he also managed to turn the wing, but not, alas, before the battle had been lost in the centre.
Posted by BigRedBat at 14:14 8 comments: 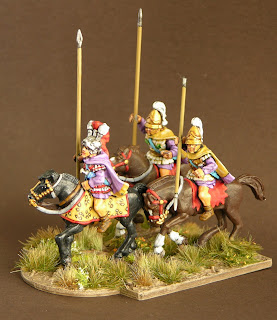 I've had these miniatures for 5 or 6 years, and I believe were painted by Andy Bryant; superb paint work.  Last week I was finally inspired to base them, but I need to paint three more to form a third rank of the wedge, and indeed a couple more wedges to go alongside them.  The rounded front edge of the wedge is to indicate the presence of a general.
Posted by BigRedBat at 13:08 6 comments:

After a very long interval, I've completed a unit of Gothic skirmishers to go with the Gothic warband I painted last year.

These minis are a mixture of Gripping Beast and Black Tree miniatures.  Some have looted Roman shields (mostly from LBMS).  Interestingly, three of the miniatures (3rd, 5th and 8th from the left) have been in my odds-and-ends box since 2005, when I picked them up at the Bristol Tabletop sale, along with some Normans; I'd love to know who originally painted them!  The minis came out OK, but the basing came out particularly well, I think because I used static grass alongside the tufts, and sealed the lot with matt spray varnish.

Every few months I hope to add another late-Roman era unit to my slowly growing collection.  You never know, one day, I may even have enough for a game!
Posted by BigRedBat at 12:15 9 comments:

I've laid aside pikemen (for the time being), to get back to some projects that have been on hold for 6 months.  First I have half a legion-worth of Caesarian Romans.  The minis in the front were beautifully painted by Nick, last year, and the ones at the rear (needing some TLC) are from eBay.  Plan is to bring the eBay ones up to Nick's standard, or as close as I can get them... 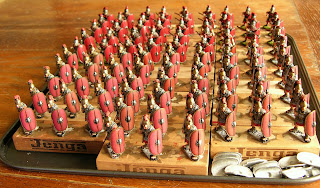 Below are a unit of Gothic skirmishers, that I finished this week and am basing up.  Beyond them are a load of Riders of Rohan horses that I've prepped for yet another project.  They are very nice steeds, and were cheap as chips. 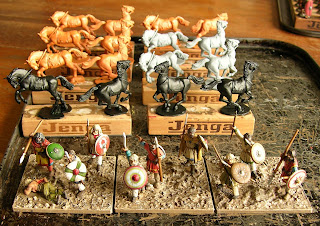 Yesterday we played the long-planned game of Raphia at Partizan.

I was far too busy to take many photos, but I did get a few good shots of the setup, and one of the team involved; so here goes!  This is a view down the 14' long table; the Seleucids being on the right. 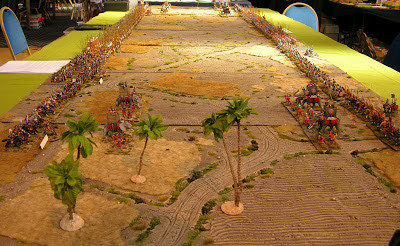 Below, this is my phalanx, with first the agema/peltastoi, then the libyans, the five chalkaspides and three deeper machimoi taxis; some 600 minis with long pointy sticks!  There were 11 lovely Aventine  elephants on the table, and Craig's phalanx was very colourful in pink and blue. 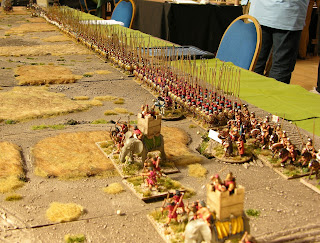 Below, Craig's lovely converted arabs stare across the plain towards the Egyptian phalanx, no doubt with considerable trepidation... 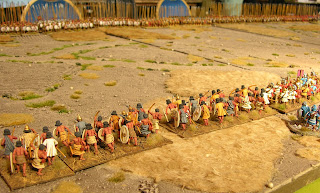 A view from behind the Seleucid left flank. 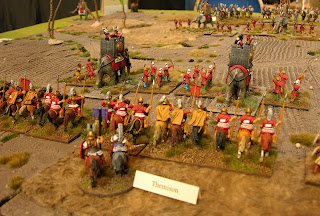 There seems to be something wrong with our elephants today... an African elephant routs through the King's Companions. 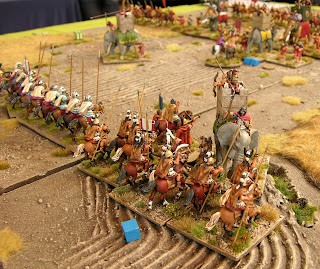 And below, an Indian routs through the Seleucid mercenary phalanx. 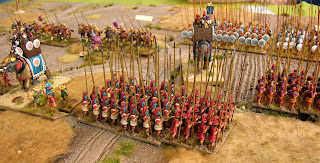 Eventually the Seleucid cavalry were able to turn onto the exposed wing of the Ptolemaic phalanx, and roll it up. 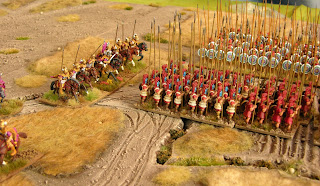 I hope to get some more shots of the battle, later.  My "To the Strongest!") rules worked very well, in their largest test to date, and Keith and Craig had a couple of very interesting suggestions, that I am pondering... 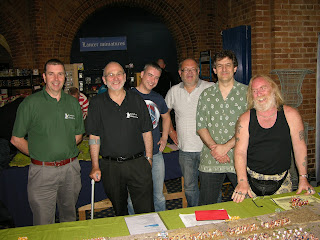 Partizan was great fun; very well organised, as ever, and I love the high ceiling of the main hall.  Sadly I didn't have time to see many of the other games, or even spend any money.  I did meet lots of bloggers and gamers, though, and enjoyed chatting with the WSS crew on the next table, too, as well as catching up with Keith, Adam, Dug and Craig.