These figures were superbly painted for me by Andres of Einar Olafson Painting (the photo is clickable, and well worth it!). 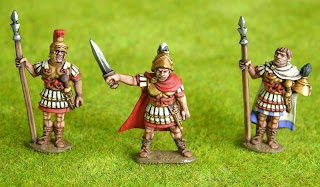 Andres is clearly a fantastic painter!  I'm going to have a very careful look at these, to see if I can inprove my own technique, although I know I can't do detail like he does.  Then I'll base them as an army command stand.
There are some lovely pics in Andres's Gallery, I particularly rate this legionary (why don't I own any Roman mules?  A shocking oversight), and this chap, who reminds me very much of the 1962 film Taras Bulba, that I saw over 40 years ago at my Grandma's flat in Cosham, near Portsmouth.  And which I remember like it was yesterday.
I met Andres briefly at Salute and do hope our paths will cross again...  If you want to commission anything he lives in Wales and can be reached at einarolafson@gmail.com

ps one of Andres other blogs, Softwars, has some astonighing 20mm scale Romans on it.
Posted by BigRedBat at 14:44 7 comments:

Nice day for a... white wedding

My tickets to the Royal Wedding having been unaccountably lost in the post, I've decided, instead, to celebrate in my own very particular way, by posting (clickable) photos of my refurbished Hun detatchment.  Whilst I watch on HDTV.

The figures are a real mix; mainly Chiltern, but with Essex, Gripping Beast and a lonely Curtey's Mongol.  There is a single Roman in there, and when I expand this unit I'll include more "Roman deserters".  Many of them were bought painted on eBay and have been retouched, others, pained to match.
Below is Attila, Scourge of God.  Gripping Beast on a Foundry steed. 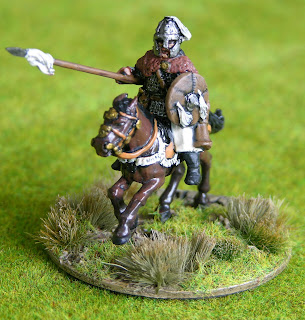 Here are the heavy cavalry, I'm planning to expand these to 18 figures in due course. 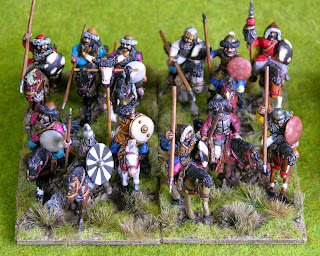 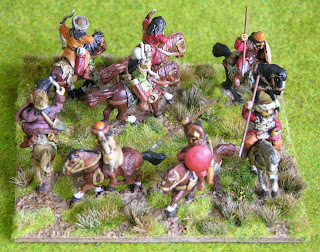 The horse archers (above) are based dynamically, firing as they cross the front of the enemy units.  I need a lot more of these, but have unfortunately misplaced my box unpainted Huns, somewhere in the Lead Mountain.

This last unit is unusual; they are fantasy figures, designed and cast by my Scottish friend John Smillie, and I believe this is the only unit of them in existance. 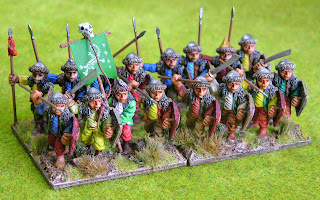 I'm very pleased with the way the figures from disparate sources have come together.  There are not yet enough for an army, but just about enough for a wing.
Posted by BigRedBat at 10:53 10 comments:

Email ThisBlogThis!Share to TwitterShare to FacebookShare to Pinterest
Labels: Huns

I've crudely painted the 6 Huns I mentioned in my last post, to match the crudely painted ones I bought on eBay and based a few years ago.  When I flock the new miniatures, I'll taken the opportunity to "tart up" the older bases to my current standard, with additional Silflor and some drybrushing.
The figures are a mix of Chiltern (ex Whitecross) with some Gripping Beast nomads and a single temporally-displaced Curteys Mongol (rear right, a very nice mini). 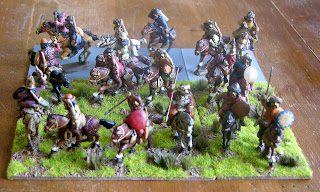 I already own another dozen painted Hun heavy cavalry, so am starting to accumulate a useful force; at least enough for a wing.  If the Society of Ancients pick Chalons for their game next year, I shall paint a whole lot more.
Posted by BigRedBat at 18:43 8 comments:

Happy Easter, one and all!

A very happy Easter to all my readers and fellow bloggers!

The weather in the UK has been fantastic; I painted outside until 7, yesterday evening.  The old climbing frame in the background, looks a bit like one of Paul Darnell's forts!   The lilac is in bloom and looks fantastic.  Today (Saturday) the weather is even better, I can't recall ever having  experience such a run of beautiful weather in April. 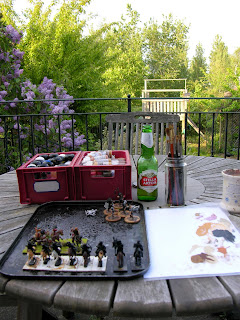 On the painting table are the 6 part-painted Huns I mentioned recently and 4 previously-painted Huns, for style comparison purposes.  The old Huns are pretty scruffy by my standards, tatty sculpts with average eBay paintjobs.  However I think I can make the bases look good, so hopefully one won't notice the minis, too much.  And they are scruffy Huns, anyhow, lather lacking in sartorial elegance! There are also 7 Roman command figures that I seem to have developed "painter's block" over.
Posted by BigRedBat at 10:49 9 comments:

The Gallipoli game at Salute 2011 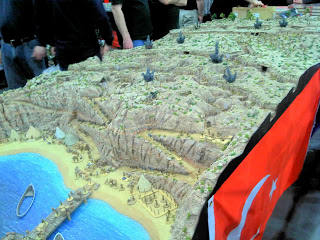 Aside from the mass of it, the detailing was great (figures too).  I could make out the strata in the stone in the side of the cliff.  Top job! 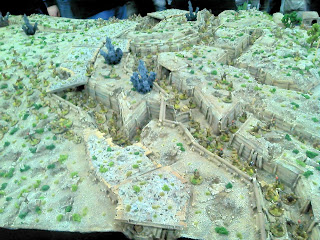 I was daunted by the quality of it, could never produce something like that myself.  I didn't hear if it won an award, it certainly should have. There are some very much better pics of it here.
Posted by BigRedBat at 18:02 5 comments:

Again I've based them so that I can deploy them in line (above) or cuneus (below).  Pics are clickable. 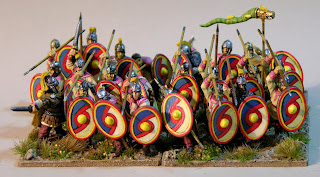 Inspired by the period, I've decided to paint up half a dozen huns that I prepped and undercoated around 2 years ago.  There is nothing sadder than a primed figure waiting to be painted, and gradually getting more and more chipped...  I'll be ready if the Society of Ancients pick Chalons for next year!

If anyone wants to swap some unpainted Foundry Late Romans, I'm after some...
Posted by BigRedBat at 17:24 7 comments:

Not my finest photo, but here is the first of my 2 new Late Roman Auxilia units.  The shield pattern is loosely based on the Armigeri Defensores Seniores, but I think of these as a unit of Auxilia.  Stunning work on the shields, which I bought on eBay along with the majority of the figures (I painted 8 figures to match).

I've based them so that the line curves back slightly at the ends, so that the unit is somewhat "bow" shaped.  The reason for this is that, when I take the middle two half depth elements and put them at the back, it gives the unit a wedge-shaped appearance, which I think of as a cuneus.  The idea for this came from reading Simon MacDowell's excellent Late Roman Osprey. 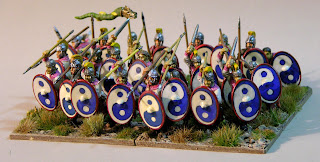 The original painter did a great job with the decorative patches, but I hope that I have had a fair crack at matching them on mine.

I've now got 4 Perry Late Roman units; the start of a small army. I could do with a Legione, next, but have lost the remaining figures I have, somewhere in the Lead Mountain.
Posted by BigRedBat at 22:04 8 comments:

I've not posted for a week or so after a break in Paris and Salute.

Gloarmy Greg and his wife stayed here over Salute,  which was great, and it was also a lot of fun meeting some of my fellow bloggers in the flesh at the show, including (but not limited to) Iron Mitten, Saxon Dog and Andres of Einar Olafson Painting.  I chatted with James Morris about his beautiful Ethiopian set up.  Also met Nick Speller and gave him some more stuff to paint for me, and Paul Darnell who delivered a pretty piece of terrain which I'll photograph later.   Saw local boy George Moraitis.  Also met lots of others (apologies if I missed you)!  I helped Greg with his very pretty Memoir '14 game, but not nearly as much as I should have (sorry Greg).

Of the games I saw, my overall favourite piece was the Gallipoli terrain, which was simply the finest bit of terrain modelling I've ever seen. Astounding!   Saxon Dog/Paul Darnell's game and Ethiopia were very impressive, too.

I didn't spend much money, except on a copy of the Hail Caesar, rules which are presently giving me an unfortunate sense of deja vue, as they rather remind me of Warmaster, which I never took to.  Except they includes recipes for cooking milk-fattened nails, which Warmaster certainly didn't.  I have a serious hunch I may regret the purchase of the rules... but I suppose I might give the snails a go.

I finally finished basing the Late Romans tonight; photos to follow, tomorrow I hope!
Posted by BigRedBat at 00:42 4 comments:

I bought 32 of these boys 4-5 years ago on eBay, and they have finally made it to the front of the queue.  The shields, in particular, are beautifully hand painted (have a click!).  I've painted 16 figures to match (at the back), and later will add spare shields that I had the presence of mind to buy, at the time, from the seller, to round out my first two 24-man Auxilia.  I'm also planning to rebase the 16 minis of the right, which look a little bit too regular (and my basing has improved).

They are all Foundry minis, sculpted by the Perrys.  A lovely range, just a tad on the small side for my tastes.  Some day I might replace them with bigger GB or perhaps the new Muskateer minis.
Posted by BigRedBat at 18:34 12 comments:

Not my Epic Guagamela III and Final Part

...being the remainder of Dug's game 1 (all pictures clickable). 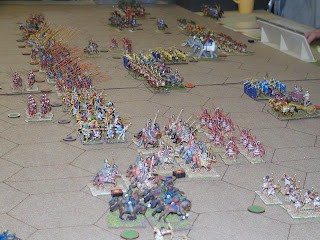 In the above, it looks to me like the Persians in the centre are pressing forward onto the Macedonian pikes- not something I'd fancy, personally! 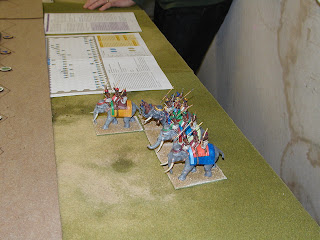 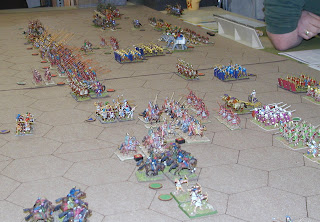 Companions pushing forwards, in the centre. 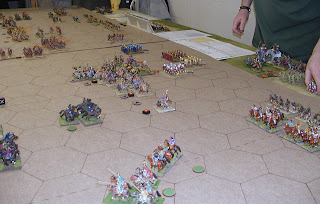 Above, the Companions are well forward, and one of the phalanx blocks seems to be half way to Babylon, already.  I wonder whether the chariot is Darius?

Final shot of the battle above.  I understand that the Macedonians won by a fair margin, and the following 2 games, too!  Looks like the players had a fun day.
Posted by BigRedBat at 20:29 4 comments:

Not my Epic Guagamela II

Some more photo's of Dug's excellent game. There are an awful lot of elephants in the Guagamela scenario; rather too many, in my view.  But they look good... 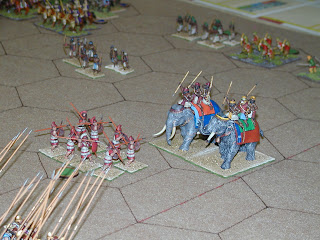 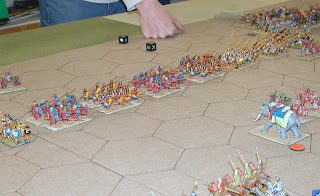 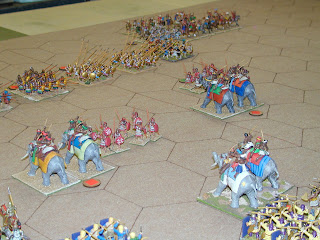 And my favourite two closeups... the pikes, in particular, look brilliant!  It is the first time that I have regretted that my own pikes are all vertical. 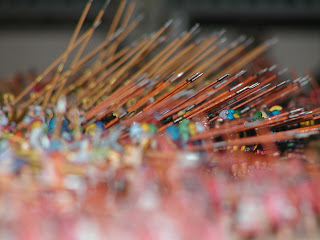 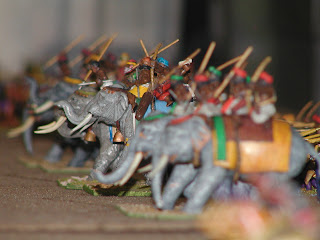