The very best to all my fellow bloggers and visitors!
In 2015, may all your dice be sixes and none of your cards Aces.

Posted by BigRedBat at 20:55 No comments:

I have just set up a Facebook site for the rules, where I'll let people know all the latest developments, especially new army lists as they become available.  It can be found at:

In other news I have reorganised all the army lists so far into five separate "booklets" and an index. I will add more booklets over time, and some booklets will be later be subdivided.  So far I have:
All of the booklets and the index are available for free download from the BigRedBatShop.

I've added a half-a-dozen new lists over the last week (including Ptolemaics, Saxons and Normans), and expect to post some more shortly (Goths, Huns, Vandals etc).

Can I say a huge thank you to everyone who has bought a set of To the Strongest!  I am very pleased to say that I have sold a whole lot more sets than I had expected to by this stage, which is why I'm working so hard to get the most important lists published.  If there is a particular list you are after, please post in comments and I'll try to prioritise it.

I hope to have time to play a game, myself, in the first week of January; something a little different...
Posted by BigRedBat at 10:25 No comments:

Over the next few days I'll be giving the BigRedBatCave a much-needed makeover.  Please bear with me whilst I do so!

If you have any difficulty viewing any part of the screen, please drop me an email or add a line in "comments".

Thanks, Simon
Posted by BigRedBat at 12:22 No comments:

I'm a little up against it, but had time to grab a couple of WIPs shot of my new Auxilia Palatina unit, which was mostly painted by Shaun Watson. I really like the animated poses of these Black Tree minis. Proper photos in a few days time.  Below, the bases are grouted ready for painting.

Regarding To the Strongest!, I am currently working on Alexander and the Successors, and have a couple of new lists available for free download from the BigRedBatShop (Rise of Macedon, Alexandrian Imperial).

You might also like to look at one of the things that has been slowing me down, recently!
Posted by BigRedBat at 12:13 No comments:

Last night I repainted the shields on the "Leones Iuniores" as the Gratienses, as discussed in a previous post.  I also took the opportunity to reduce the width of the rawhide edgings and to weather them.  Here is the before... 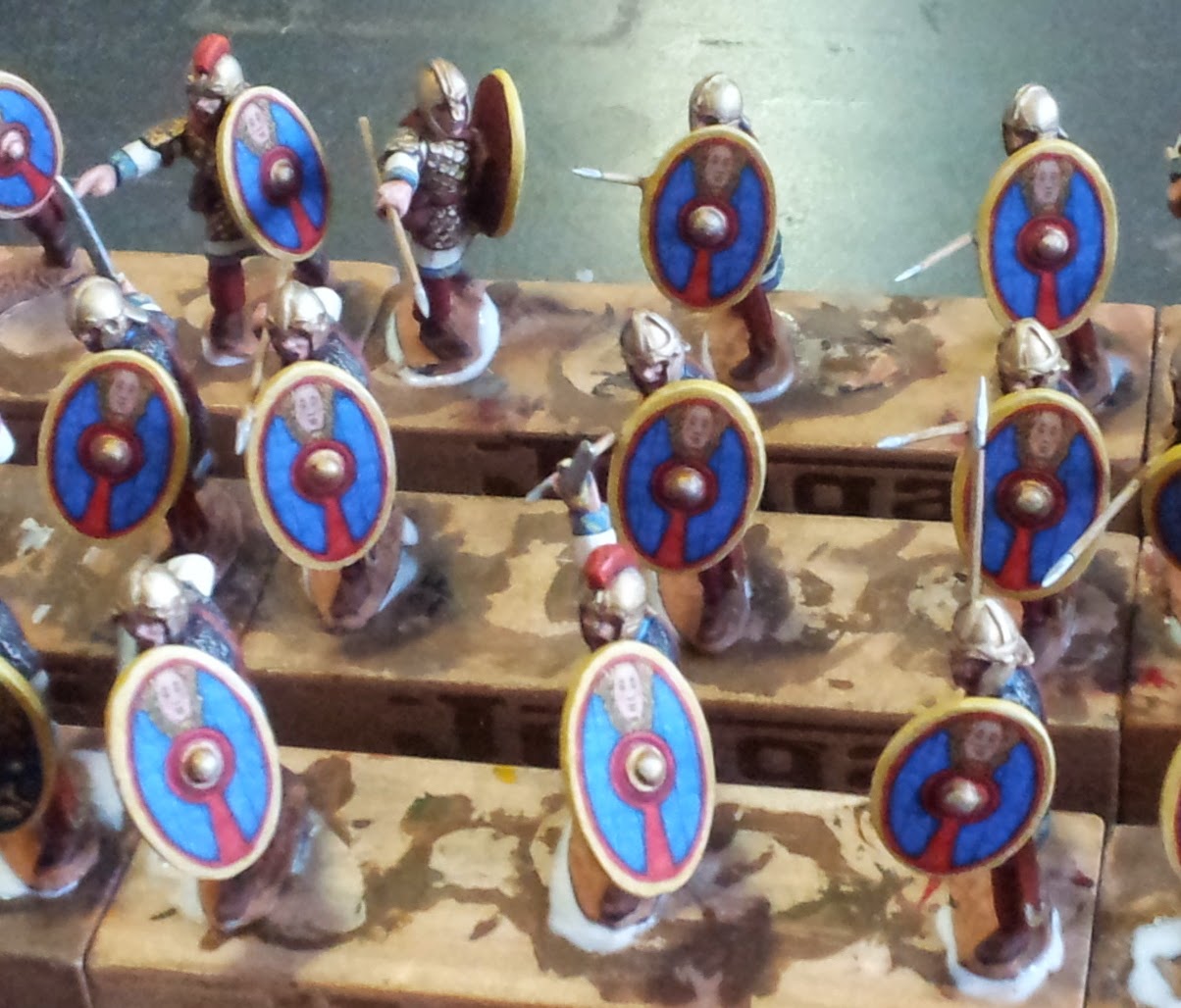 And here is the after... 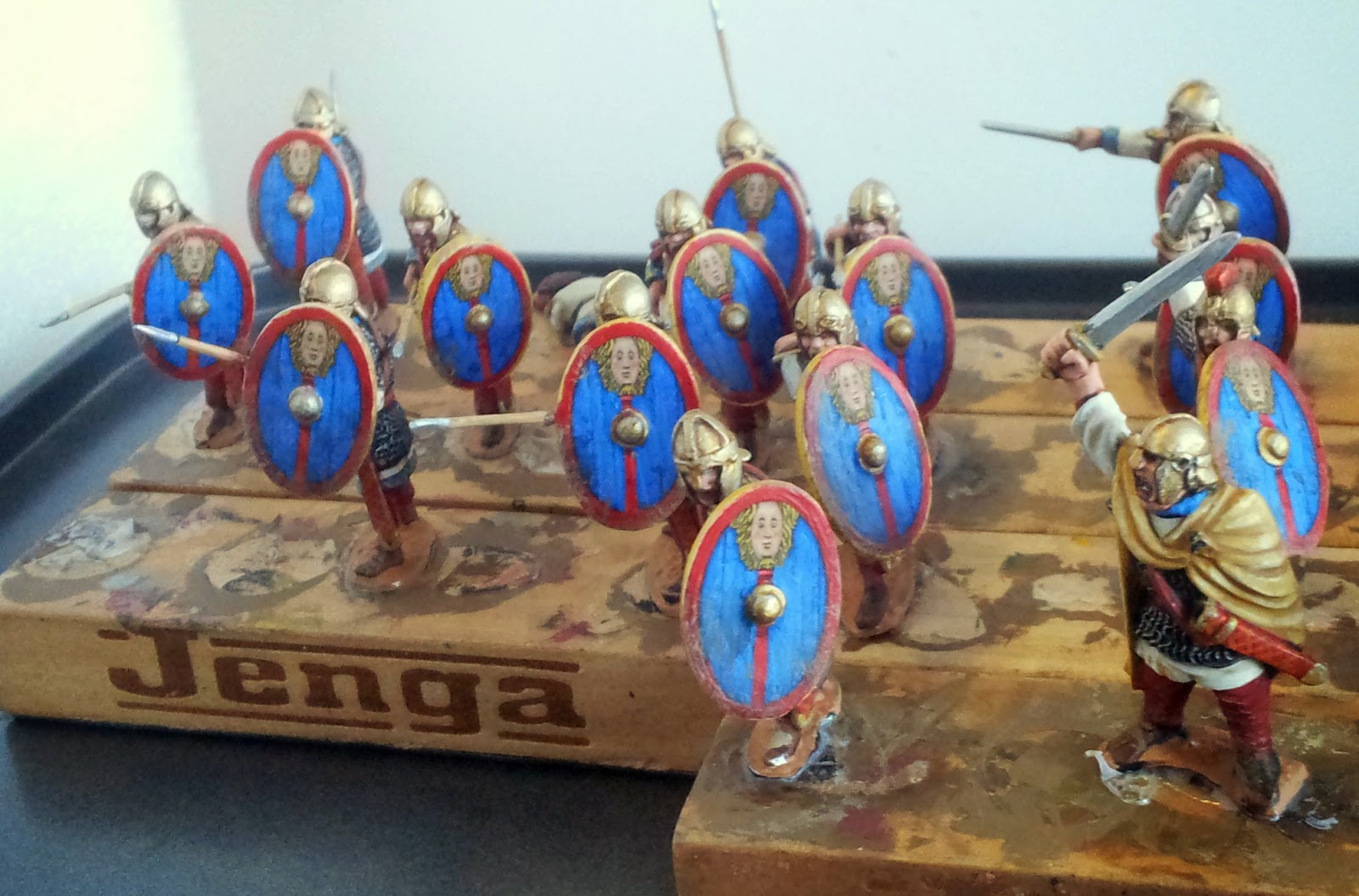 I'm pleased that they look sufficiently different to warrant inclusion in my Late Roman army.  Proper photos to follow when they are based.


On the "To the Strongest!" rules front, I have added several new armies to the free spreadsheet of army lists, including Germans, Dacians, Sarmatians and a "Rise of Macedon" list for the Armies of Phillip II and Alexander.  It can be found here.  I am pleased to report that the rules are selling well!
Posted by BigRedBat at 11:59 No comments:

More fun with the Notitia

I've been looking at Luke Ueda-Sarson's excellent Notitia Dignitatum site, which is the site for the Late Roman shield design alficionado.

The good news is that there is a similar design to my other unit.  I hesitate to copy images from the site due to copyright, but the Gratianenses have a very similar shield design to what I thought were the Leones Iuniores.  It turns out that, due to the failings of a copyist back in days of yore, the names of some of the units most likely have the wrong names.  My Leones Iuniores are, in fact, probably the Leones Seniores. The Gratienses probably aren't the Gratienses, either, but someone else!  It is all fearfully complicated.  However it means I can retain both units, and can probably "fix" all of the shields in an evening's work. Tomorrow evening's work!
Posted by BigRedBat at 21:46 No comments: