Or "It comes down to the triarii!" 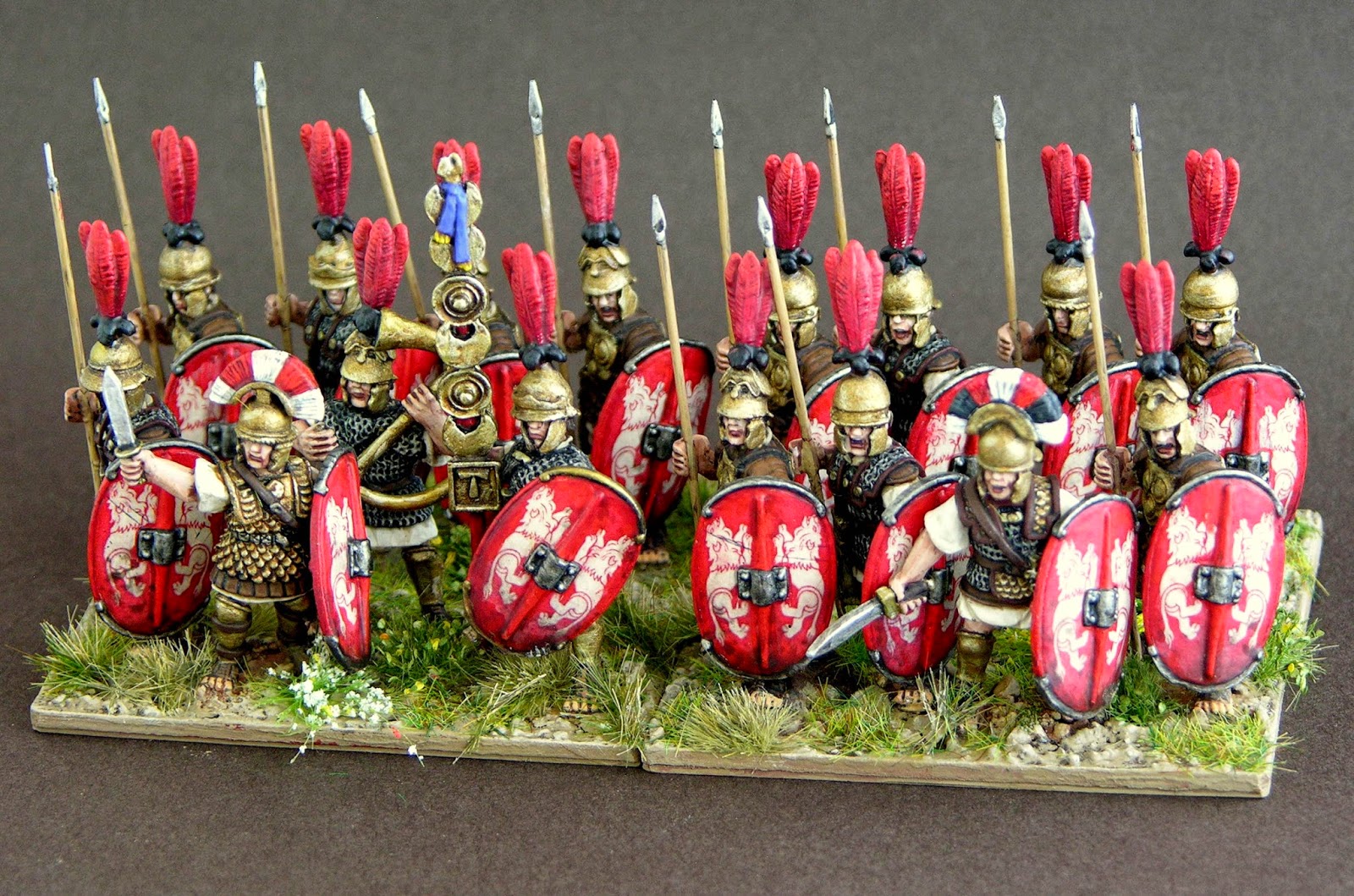 The triarii were the reserve line of the Polybian legion, and if they needed to be committed, then it was a bloody battle that could go either way. These are lovely Aventine figures, that I bought beautifully painted from Shaun Watson (Redzed), do have a click to enlarge the photos. I've only needed to repaint the plumes to match the colour theme for this legion, and base.


These are part of a huge refight of the battle of Pydna, 168BC, that I'm working on for t'other Partizan, in Newark on 7th September. I'm collaborating with Keith and Adam from Aventine, the illustrious Saxon Dog, Craig Davey and others. This will be one to catch! 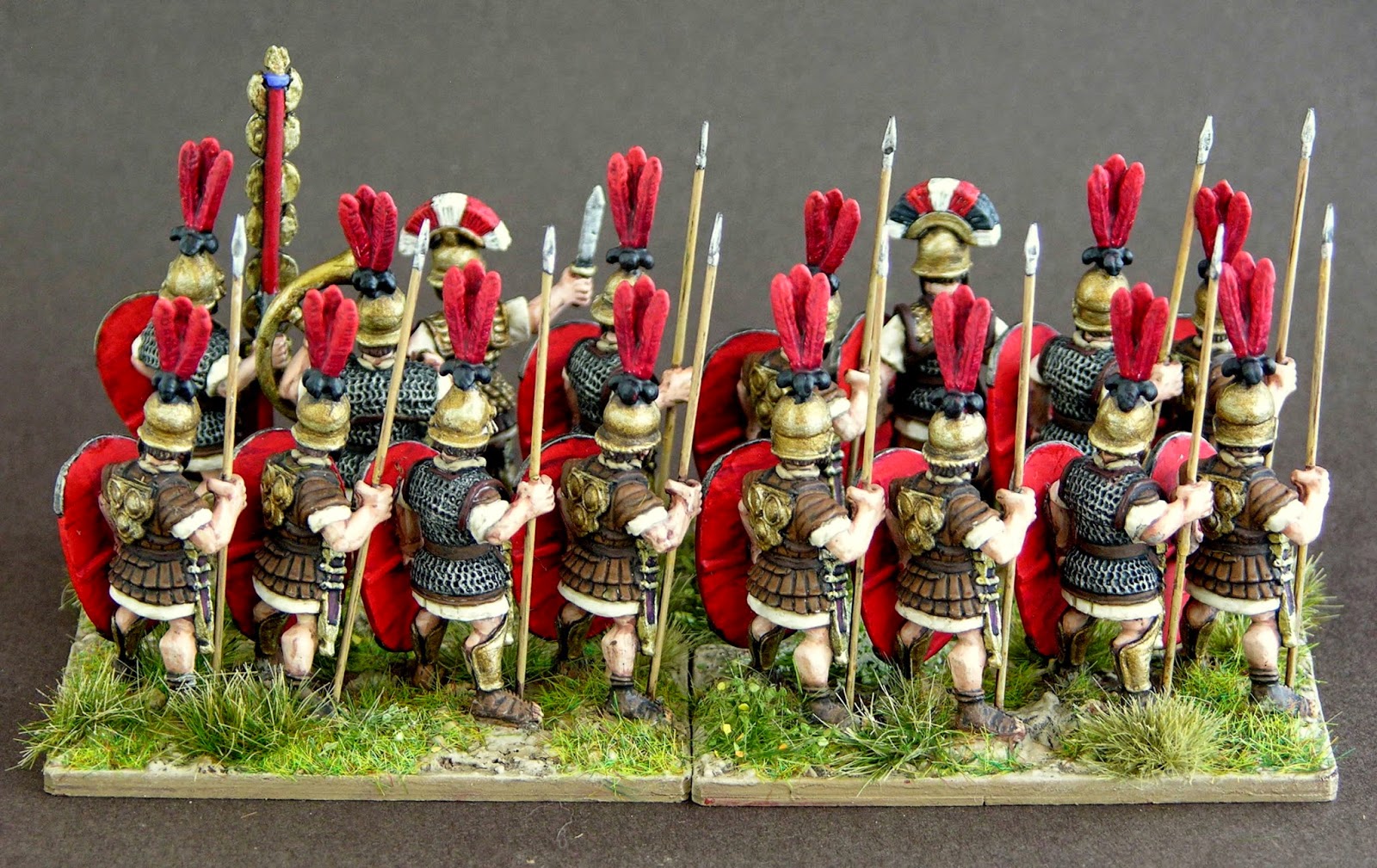 The other big wargaming project that I'm working on, in parallel, is my second "gig" at the Wargames Holiday Centre on the weekend of 30th/31st August. This time, I'm adding Spartans to the mix, and more Late Romans. The battles will be, tentatively:

The Battle of Mice 331BC
Kent 55BC
Tacfarinas’ Revolt AD17
Take the High Road c.350AD
Siege of Sparta 272BC
The Elephant Victory 273BC
Thapsus 46BC
Count Theodosius vs. the Barbarian Conspiracy 368 AD

Mark still has some spaces, but it is filling up quickly, I gather, so please do drop him a line, quickly, if you'd like to come along.
Posted by BigRedBat at 09:53 No comments:

A very bad photo of some lovely figures... 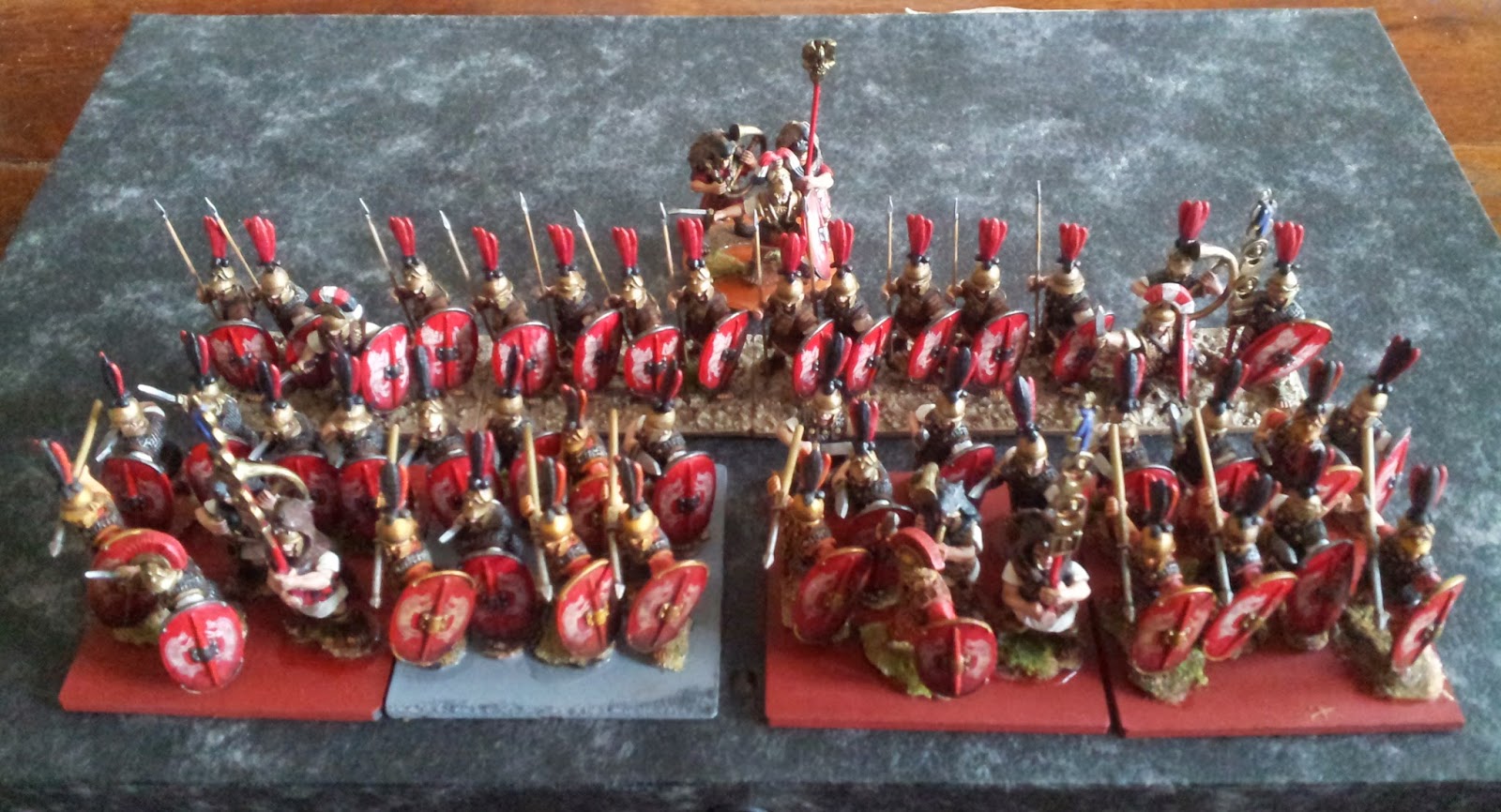 These are Principes and Triarii figures originally painted by Saxon Dog and Redzed, that I'm currently basing for the Aventine Roman legion for our Pydna game at Partizan.  Better photos to follow in a day or so.
Posted by BigRedBat at 08:29 No comments:

Six months ago, we booked our holiday in Italy.  The maps just arrived, and I find we are less than 5 miles from the north shore of Lake Trasimene!  What are the odds of that?  Especially with me in the middle of basing a Consular Roman army.  :-) 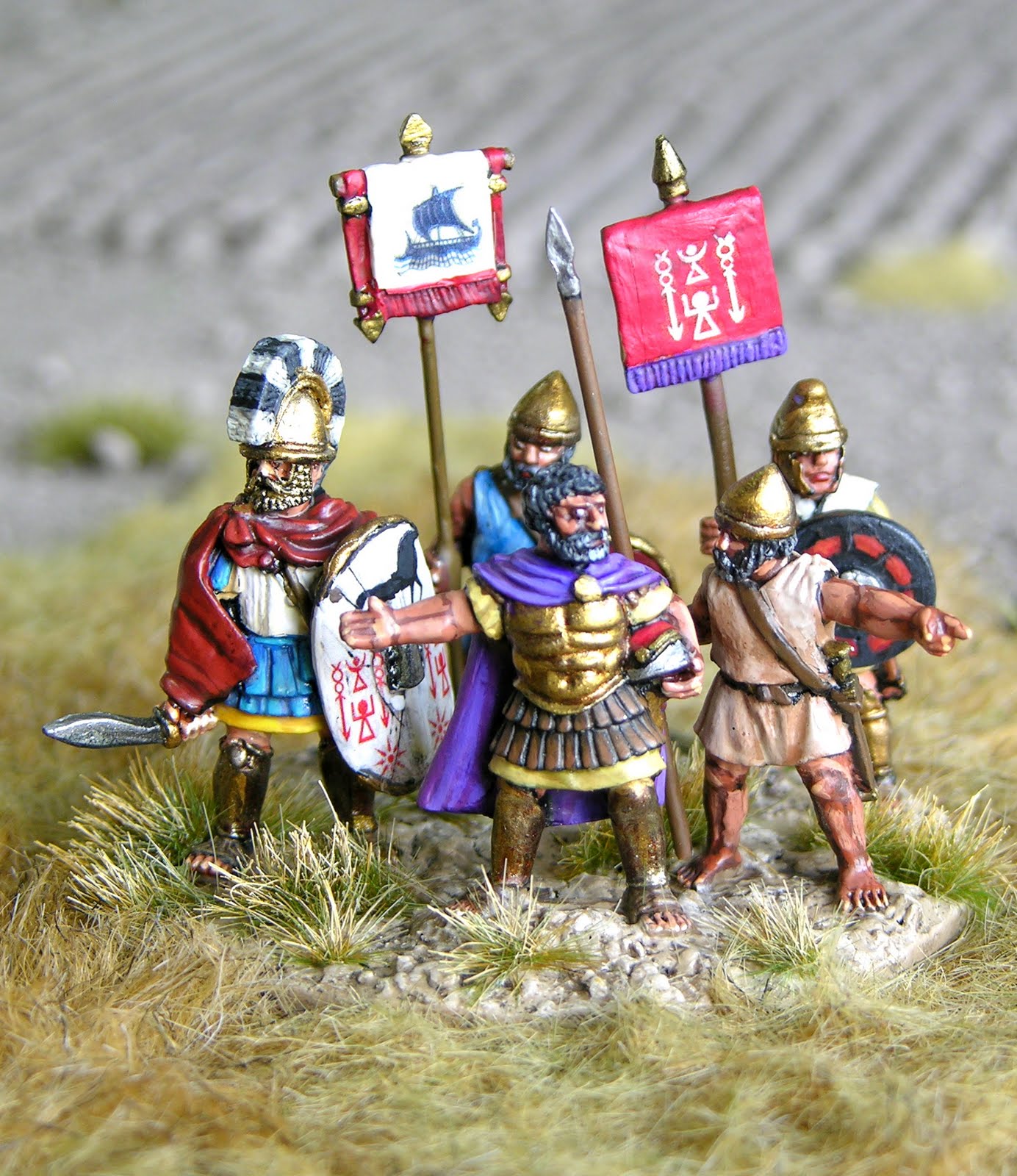 Posted by BigRedBat at 16:04 No comments:

Back in 2010, for the Zama game I did (mostly) with Keith and Adam at Aventine, and with Craig Davey, I bought an army of the lovely Aventine Miniatures Republican Romans and Late Etruscans. As it happened, I only painted a few dozen at the time (I worked mainly on the Carthaginian opponents), and have never had enough to play a game by myself. 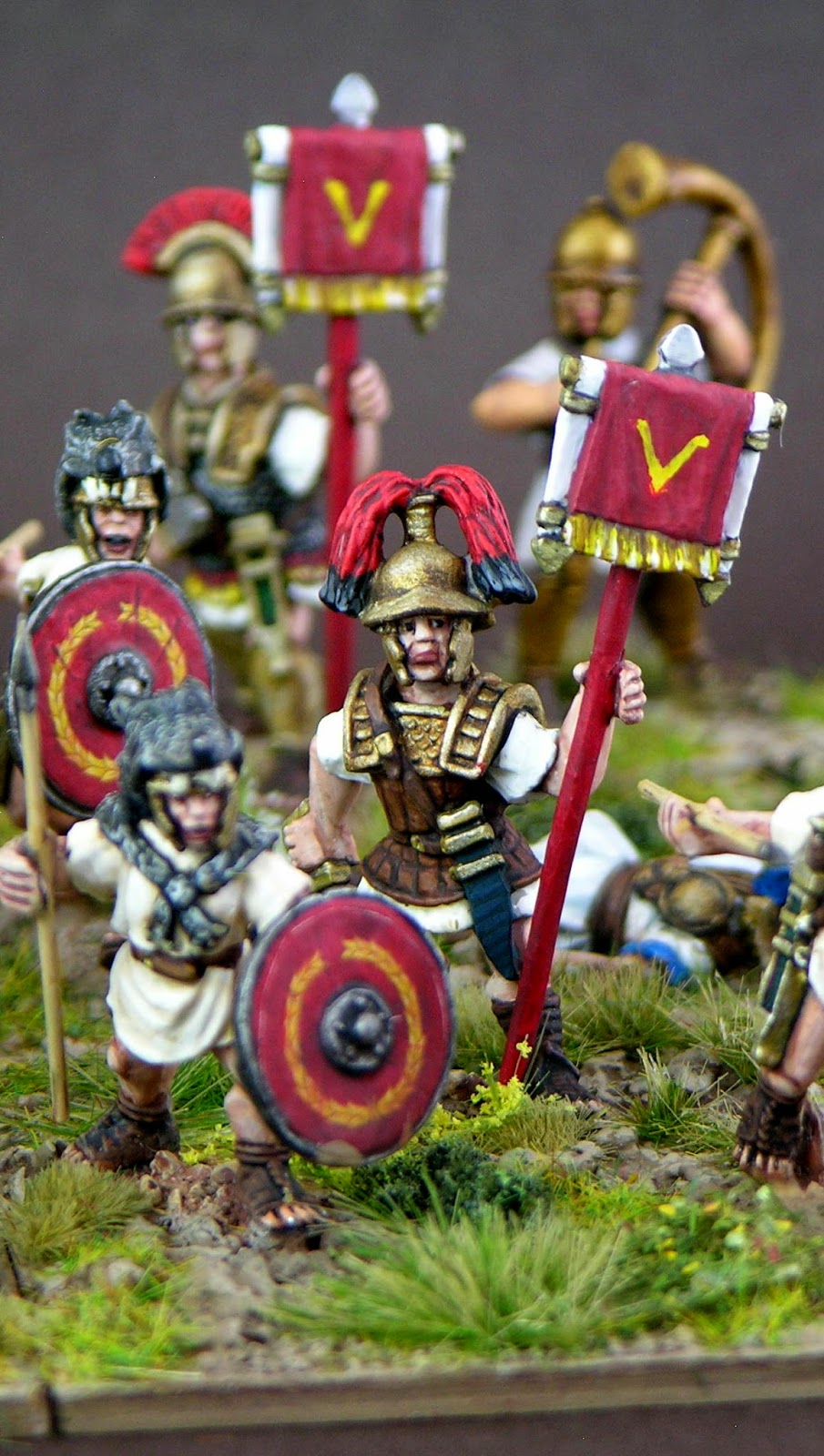 Now, as part of the Partizan Pydna Project (of which more anon), I am finally going to "stamp my foot" like Pompey did (only hopefully with rather more success), and two new legions are going to spring forth, fully formed, from the fertile soil of Muswell Hill in time for t'other Partizan on 7th September.

How is this possible, I hear you ask, in such a short timescale? Well I have been lucky enough in the intervening period to buy some beautifully painted minis from Shaun (Redzedz), David Imrie and Craig Davey, and supplement them with some eBay purchases. With a little tweaking, and a little painting, these mercenary forces are going to be formed into one Roman and one Latin legion.


And so, here are the first spoils; these are the velites for the Roman legion. They are a mix of David's and Shaun's figures, re-based and looking very fine, if I say so myself!  These (together with my 2010 Late Etruscans) give me six of the required fourteen units, so just the eight to go. Gulp.

I love the standard bearer; One of Shaun's I believe.
Posted by BigRedBat at 15:44 No comments:

Return to the Wargames Holiday Centre...

I shall be heading back to Kingsclere on the 30th/31st August for another weekend of gaming at the Wargames Holiday Centre.

This time I'll be bringing 8 battles, and making the most of Mark's excellent large gaming space by running four at a time, in parallel. Rules will be my "To the Strongest!" set, which are easy to pick up and sufficiently fast that players should get to fight most of the battles. I shall be bringing my Spartans for the first time, as well my Macedonians and three different eras of Romans with their various allies. Do drop Mark a line if you are free...

In other news I have just started work on an entirely new Roman army, of which more, anon!
Posted by BigRedBat at 10:13 No comments: 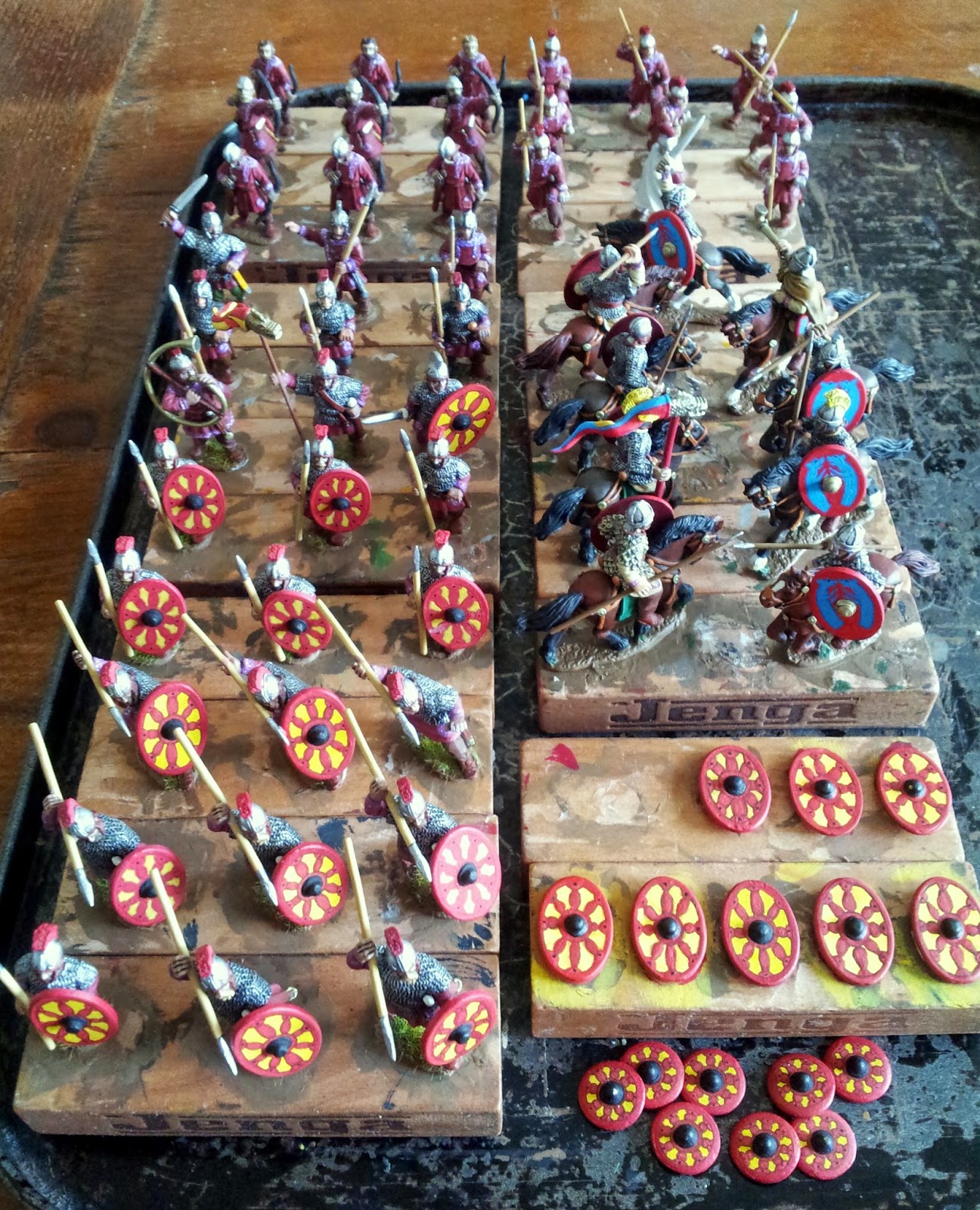 I couldn't resist working on the painted cavalry Craig sold me with the three infantry units. There were a few tiny chips, and the superglue had degraded so everything needed to be re-glued. They are mostly finished (below), I just want to apply some varnish to the shields and horses tails. I find that tails, in particular, get a great deal of wear and need all the protection they can get. I painted one shield to match Craig's hand painted ones. 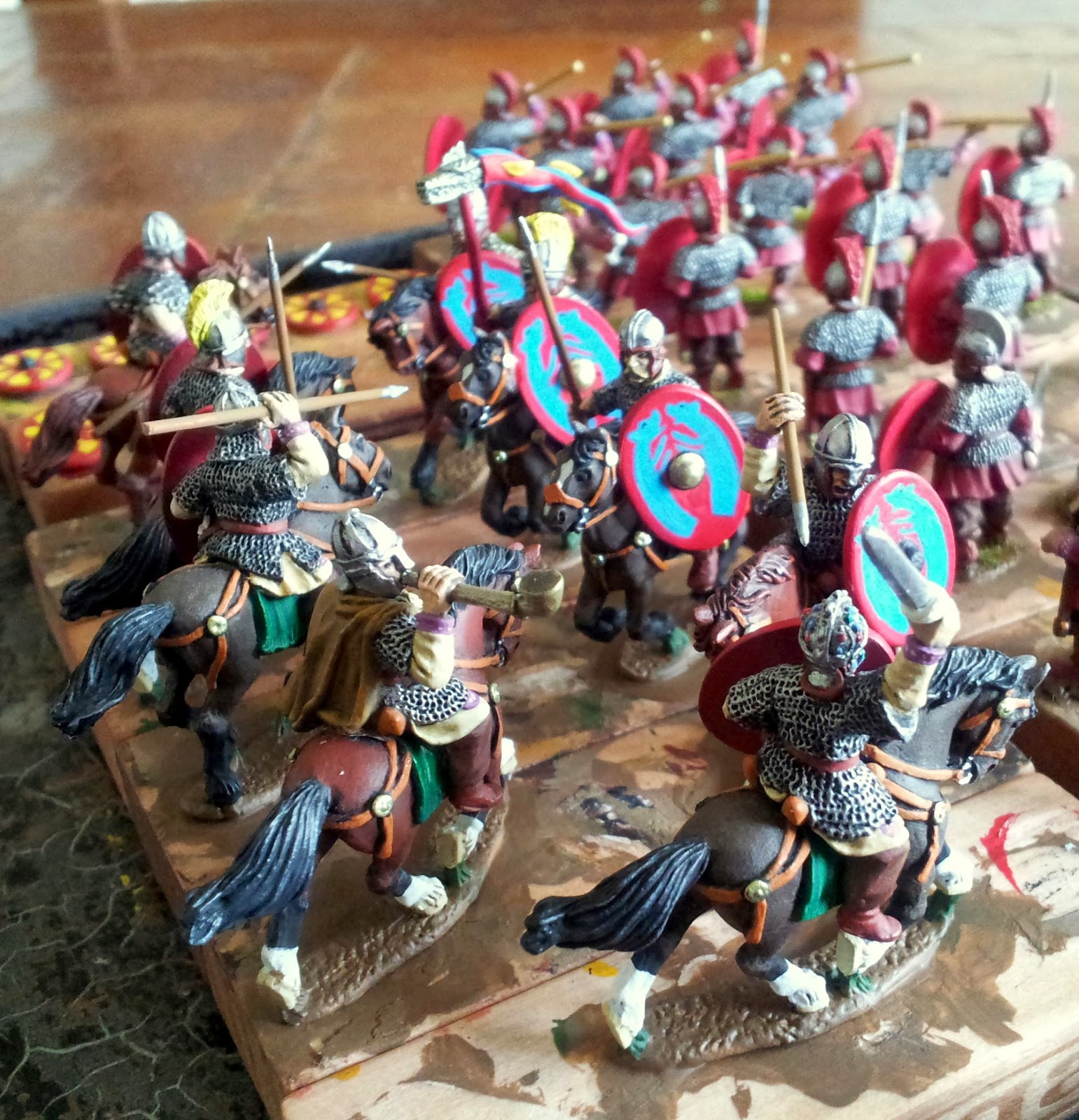 Below, I painted 8 infantry shields to match some of Craigs. Craig painted the small shields at the bottom and the ones in the centre of each Jenga piece (and 25 more not shown). Mine aren't quite as good, but when they are on the minis it will be very hard to tell them apart. I really like the subtle variations one gets with hand-painted designs. I've actually found myself thinking about painting a second unit, so I could have a full 1,200 strong Legione; however 5 nights more shield-painting is a somewhat daunting prosepect. 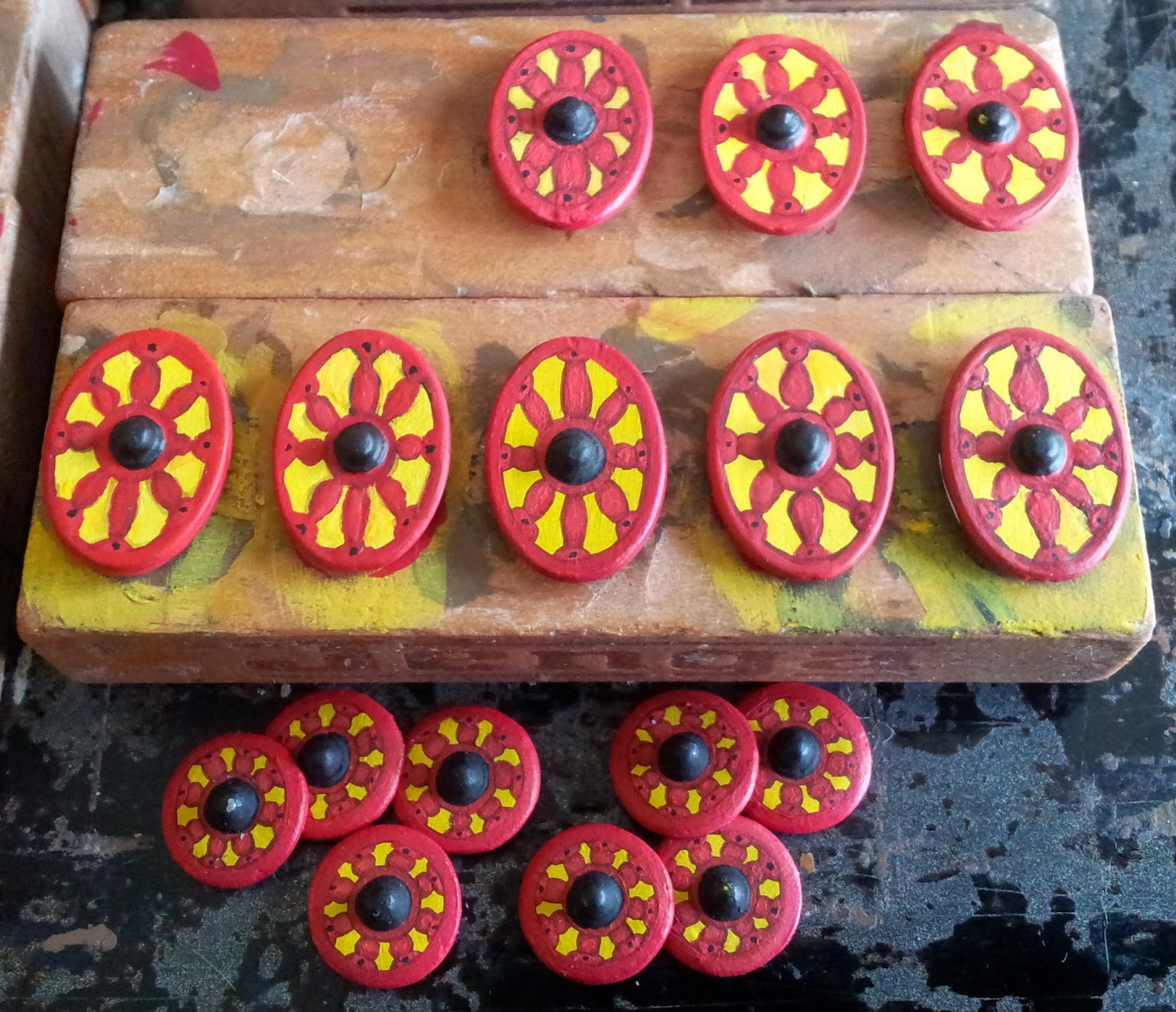 Posted by BigRedBat at 15:13 No comments: 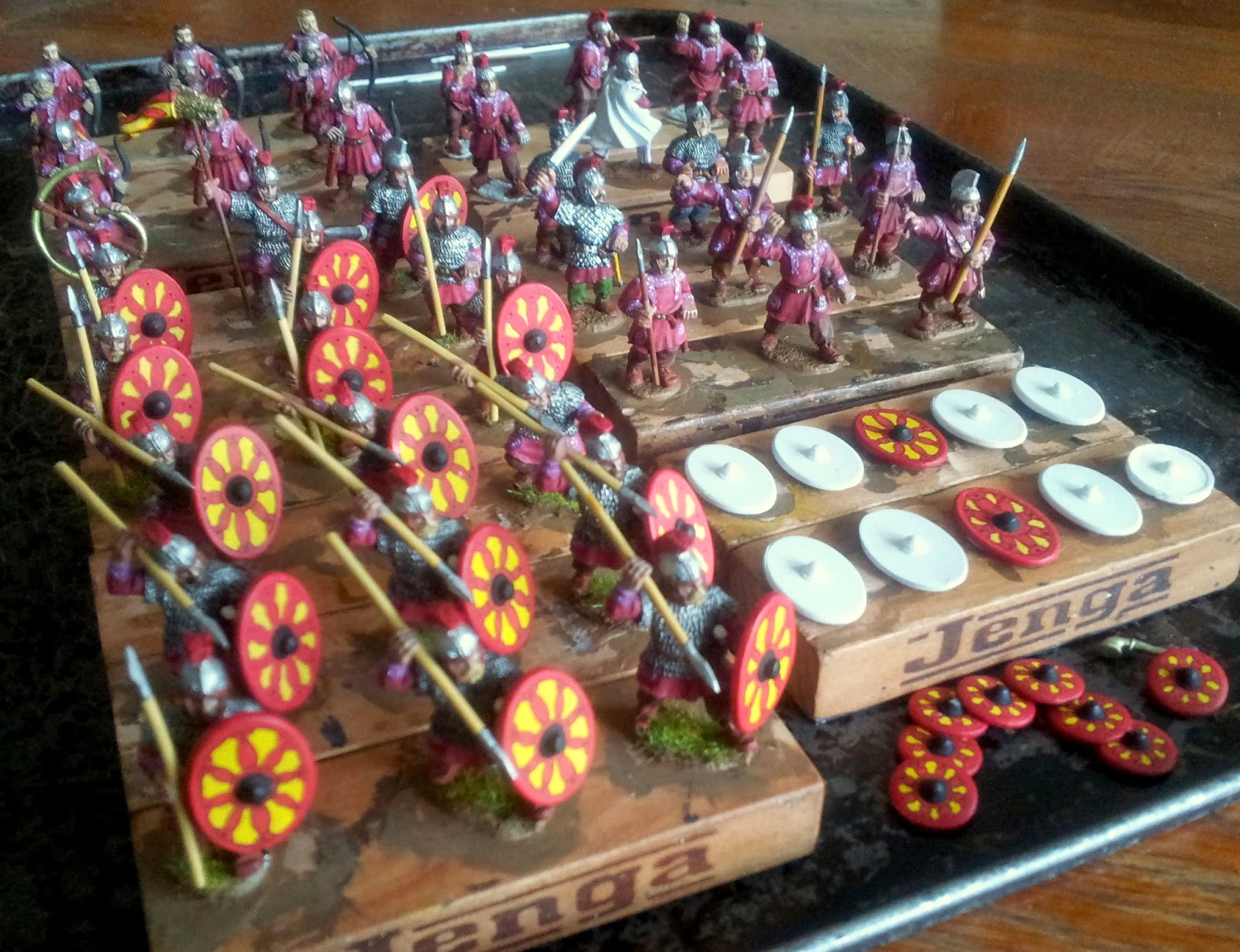 My friend Craig Davey very kindly sold me some Late Roman infantry last year, and they have been slowly fighting their way towards the top of the painting queue.  By painting another 7 minis, I worked out that I could make three units out of them.  Craig hand-painted the shields at the Secunda Britannia, and I'm going to need to paint a few more to match.  The detail on his minis it stunning, and I am struggling to match it.  I've had to clean my painting specs and break out the rarely used 000's!
Posted by BigRedBat at 12:41 No comments: