The I and II Brittanorum were Roman auxiliary cohorts, raised in Britannia some time after 43AD.  They probably fought with Vitellius in the 69 AD Civil War (most of the auxiliary units I've modelled so far are from the garrison of Britannia).

Above, I have finished 16 additional Auxilia to match the 8 spare from May, which has enabled me to form a Cohort II Brittanorum.  I intend that both British cohorts will ultimately become Equitata, so each will need a contingent of 6 cavalry.  If anyone has any spare Foundry Caesarian Gallic cavalry, I'm in the market for a swap!
The figures are all Foundry Saleh's except for the command stand which has a Crusader centurion and cornicen (I am sometimes somewhat disparaging about Crusader, but these are very nice minis) and Foundry Copplestone signifer and imagifer.  This time I remembered to sculpt knee breetches on the latter three, so that they match their comrades.
Here is the original cohort, the I Brittanorum:-

The next cohort will be the Raetians (see previous post).  I've also decided that I'll also need to paint, down the line, another cohort each of Gauls and Batavians along with their integral cavalry contingents.
Posted by BigRedBat at 21:04 4 comments:

Here are the Raetians, again, primed and ready to go.  I hope to be able to paint them in around 7 sessions, as they should be the amongst the simplest Roman figures to paint because of the whopping great cloaks.  But I still have 2 or 3 sessions basing sessions remaining to complete the British Auxiliaries, so I hope that they will be finished  in around 2 weeks time.
On the subject of primer, I used a can of Army Painter and an not at all pleased- despite my best shaking,  the minis have an unfortunate gritty texture. I actually had to wash them to get surplus powder off them! I'm going to do some careful testing to establish whether is the product, or the heat.
I'll be using the excellent LBMS transfers and have some here, left over from an earlier project.
Posted by BigRedBat at 12:38 6 comments:

While I'm putting the finishing touches to my second cohort of British Auxiliaries (photo in 3-4 days), here's a shot of the next unit.  I prepped these around 2 years ago and they have been waiting on the sidelines.  I really should be painting pikes but  instead I intend to speed-paint these... possibly next week.
Posted by BigRedBat at 15:19 7 comments:

Here's the refurbed/extended phalanx I've been working on recently, finally complete(ish).  I say complete(ish) because I've decided that it ideally needs another 32 figures to bring it to 128, which is a much more Macedonian number, but they will have to wait a while for reinforcements as I'm working on another phalanx, now. 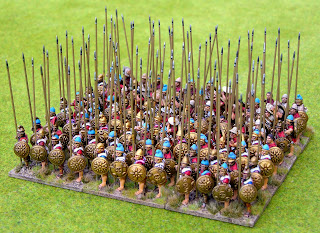 On the battlefield they will doubtless be formed up 4 deep, but 8 looks great. 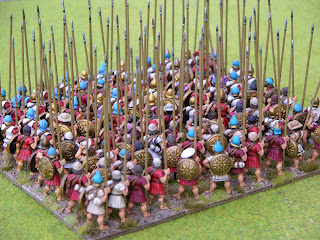 The rear view (above) shows that only the front 3-4 ranks have linen armour. 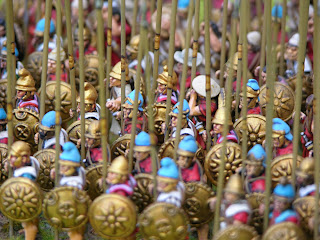 All but one of the minis are Foundry (there's a solitary Bronze Goat in there somewhere).


Unusually for me, I did paint most of the figures in this unit, except for the first 2 dozen that were beautifully painted by Andy Bryant, whose style I have tried to imitate.  The last 30 minis were painted using the fast method I described in a recent post, using sprays and dips as much as possible.
Posted by BigRedBat at 21:21 21 comments:

Email ThisBlogThis!Share to TwitterShare to FacebookShare to Pinterest
Labels: Phalanx

Here's a quick update (clickable) photo of my first phalanx, which is now around 80% complete.  Newly painted minis are joining the 50-odd minis I already had painted; there's a lot of rebasing going on, too.   You can see a lot of shields part-painted at the front, and the final 24 part-painted minis at the rear.  I hope to have the unit finished by the end of next week. 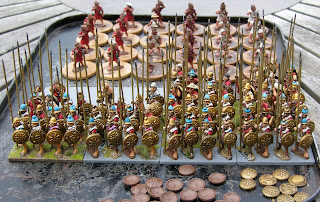