Plato described the Greeks living round the Aegean "like frogs around a pond."

I've just uploaded some "To the Strongest!" army lists covering the Greek states for the Peloponnesian War and after. Over the coming weeks I'll add the equivalent Achaemenid Persian lists. They can be downloaded for free from the BigRedBatShop. These are still somewhat "under construction," and I would value comments or suggestions, via the email address on the front of the blog.

I have a fair-sized Spartan army but would dearly love to paint some more hoplites for this period... especially Thebans, I'm a big fan of Epaminondas!
Posted by BigRedBat at 18:58 No comments:

Every journey starts with the first step... 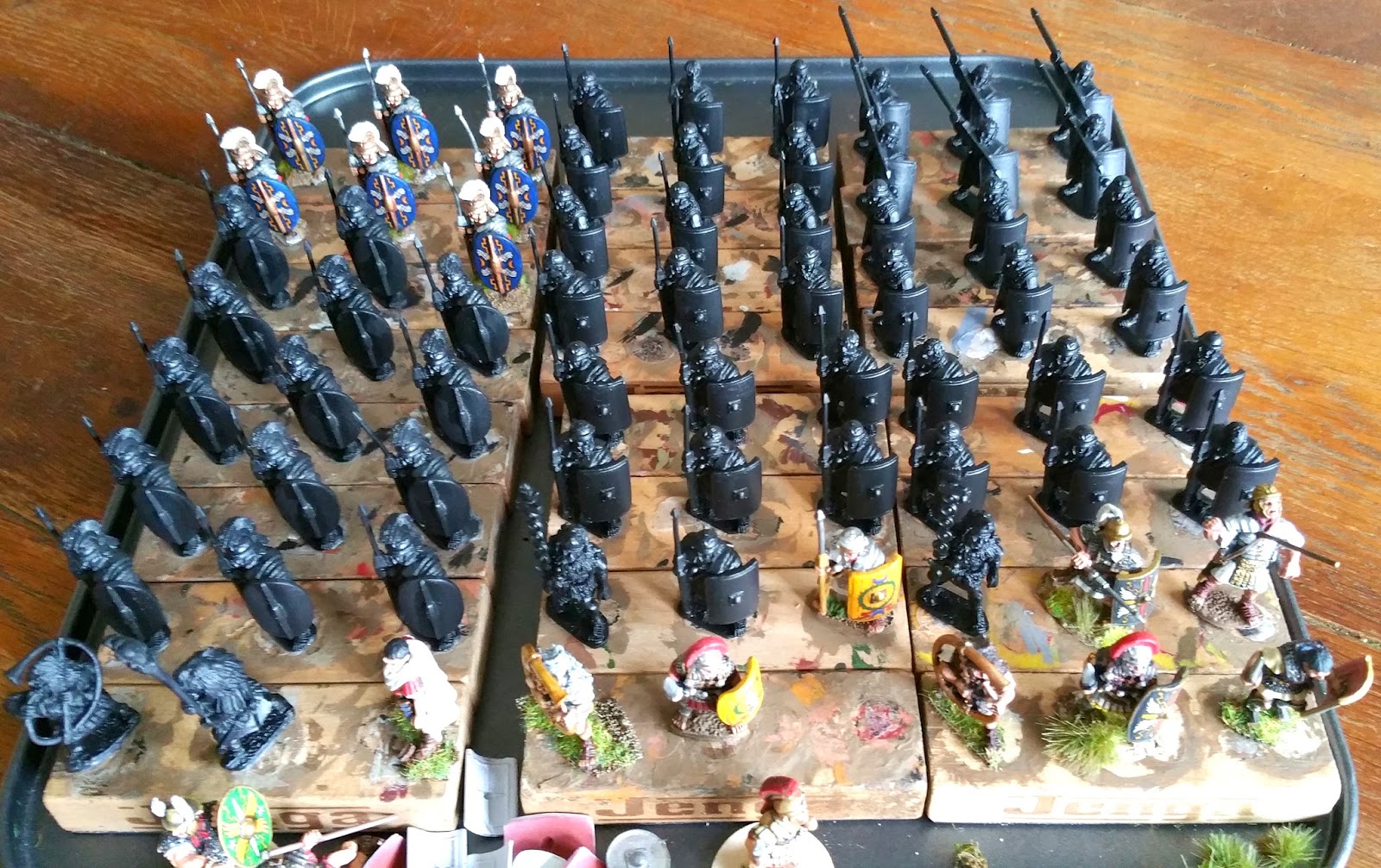 ...and the journey to Salute starts with these three units.  I've picked all of the painted Saleh Roman minis I can find (not many) and de-flashed and primed enough others to make three cohorts. If time permits I'll also paint another unit of Gladiators.

At Salute I'll be running the First Cremona game I ran at Partizan last year.  This will be an extended version of the below game with more terrain and a few more units.  Hopefully be worth a look! 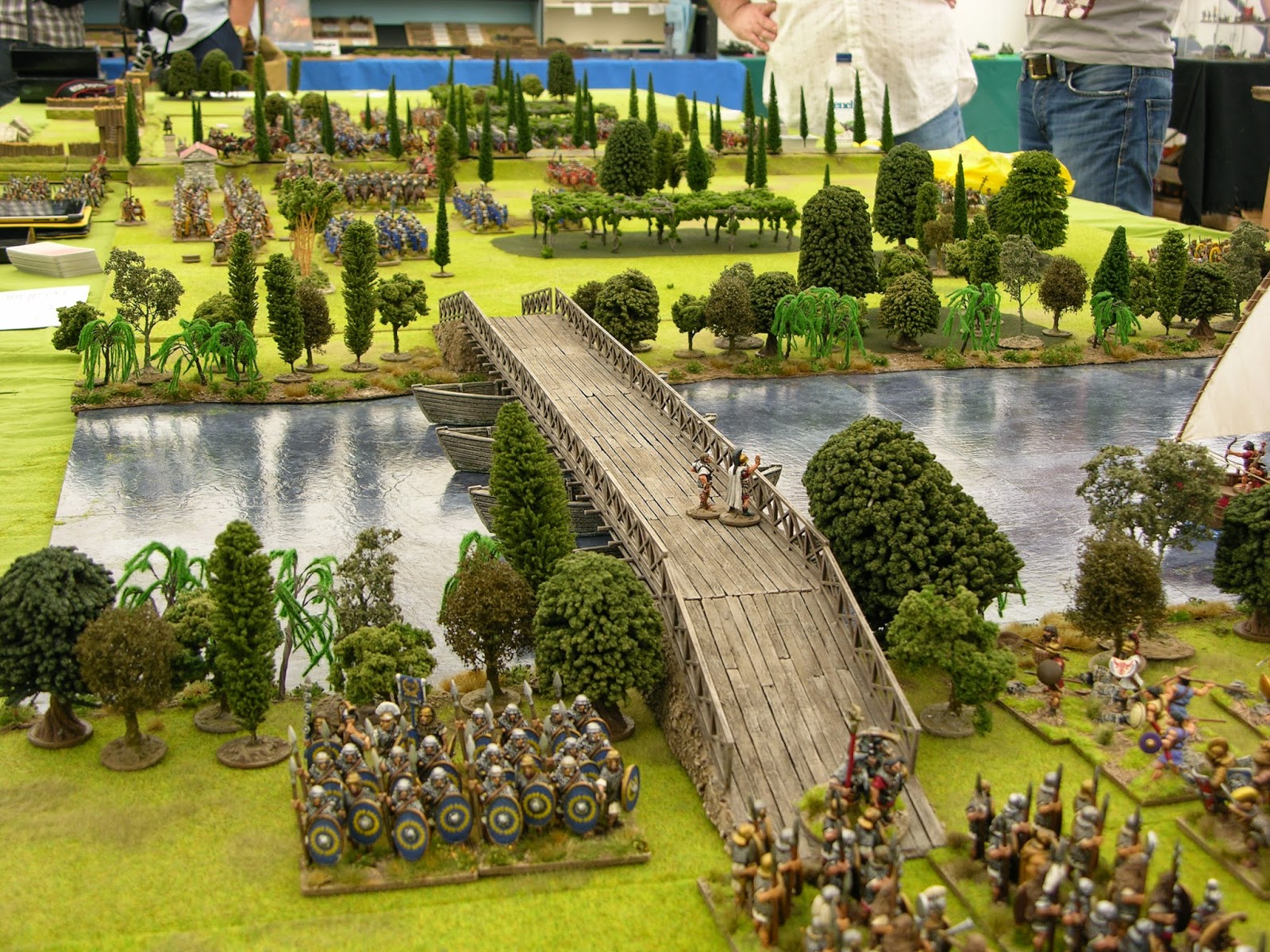 Posted by BigRedBat at 16:59 No comments:

This is a regiment of Late Roman infantry known as the Gratianenses Iuniores, from the Magister Peditum's Italian command.  They are Auxilia Palatina- well hard!  The photo is clickable.

The minis are all Black Tree's painted by Shaun (Redzed), I merely did a little work on the shield designs, some weathering and based.  They came out really well and I'm shortly going to pick up some other units from Shaun to join my swelling Late Roman army.

In other news... mate Millsy is very kindly laying out the print version of  "To the Strongest!", which is coming on brilliantly and in the meanwhile I've been working on the army lists.

Today I posted an updated version of the "Late Antiquity" army lists, filling gaps with new Herul and Later Visigoth lists. This booklet contains the Later Romans, Early Byzantines and their enemies. I've edited all the lists in this booklet to make them ready for the April release of v1.1 of the rules. These include changes included the return of the pila* (shock missiles) to baggage. You can download the lists for free from:

I also updated some of the Medieval lists.  Later this week I plan to update the lists in the "Rome's Empire" booklet.

*Shock missiles are like javelins but thrown as the legionaries (or Franks) charge into contact, potentially disordering their enemies. 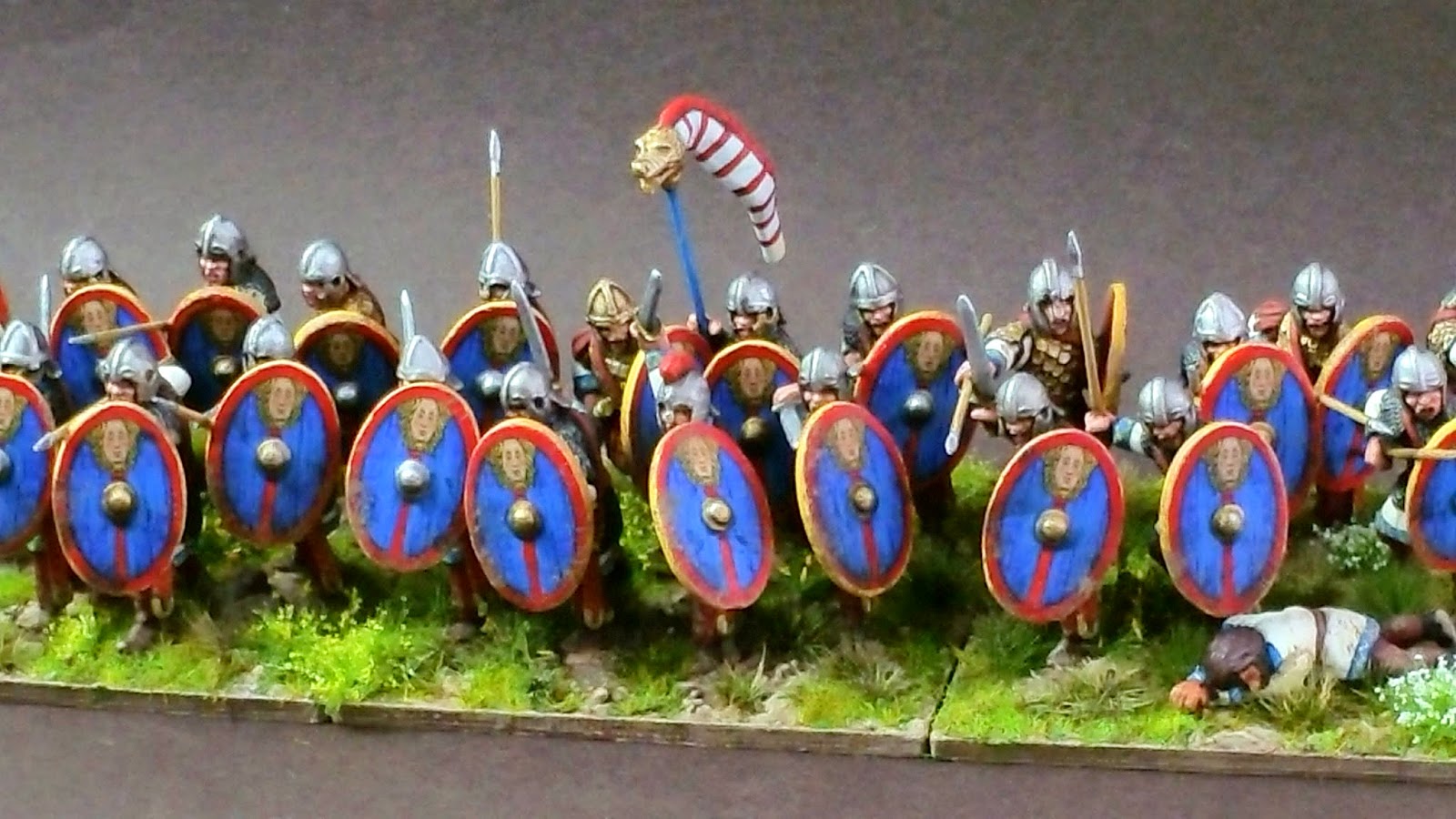 Posted by BigRedBat at 14:31 No comments: 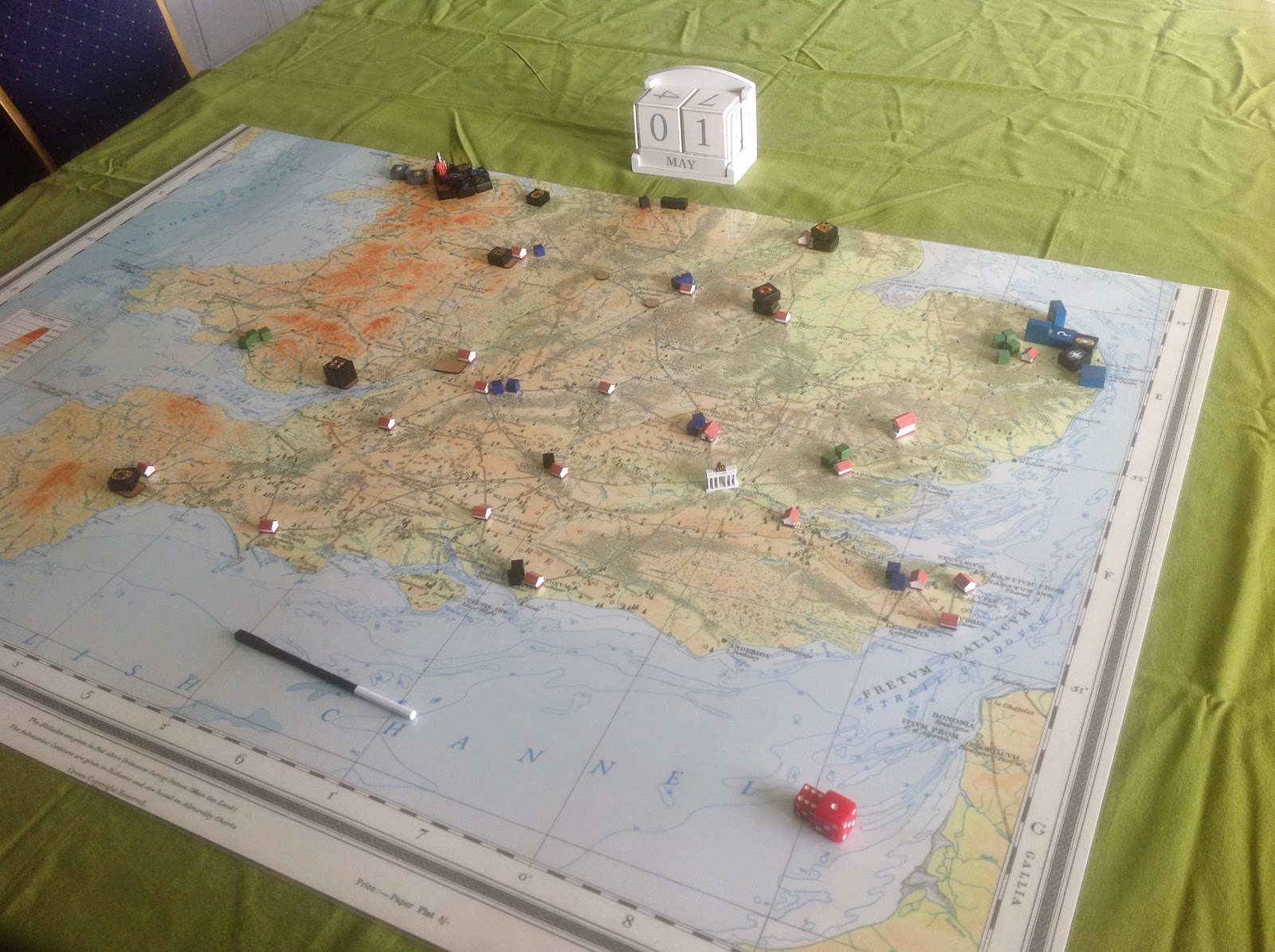 These are some shots of the game we played on Saturday. I've been write a wargame campaign that could be played by non-wargamers, set during the Boudiccan revolt of 61-62AD.  It is named Fallen Victory after the statue of Claudius in Colchester that supposedly fell over just before the revolt began.

The campaign day broke into two parts. During the first, the two teams, in separate rooms, manoeuvred across replica antique maps of Roman Britain. This proved to be very exciting, as for almost the whole two and a half hours, neither team had very much of an idea what the other was up to. I umpired the Roman team which reacted to the growing crisis with considerable stoicism; no tears were shed even when II Augusta perished to a man. Below is the British team; after a somewhat shaky start, they rallied and burned a broad swathe of destruction right across the width of Roman Britain. 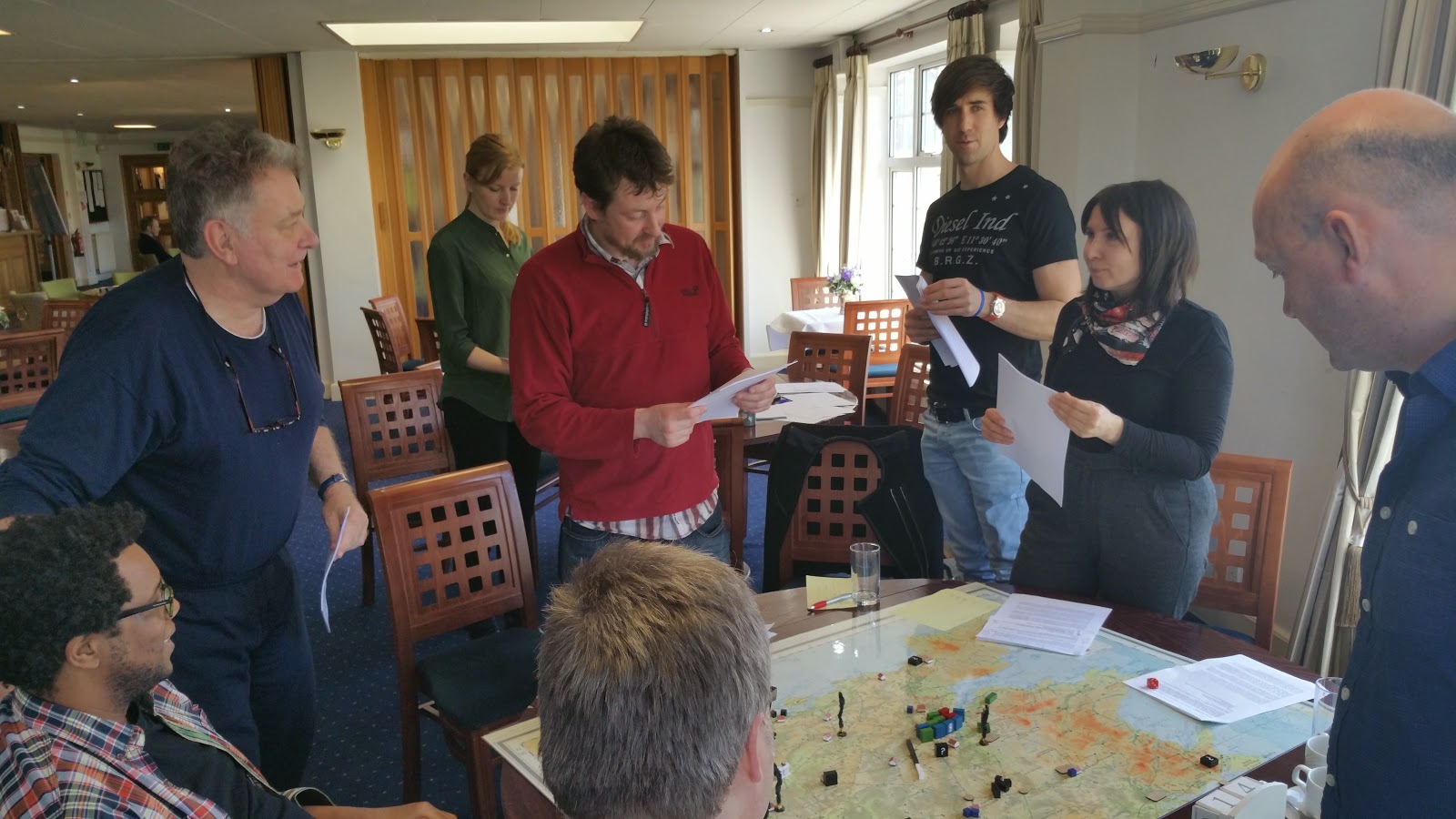 When the two armies met (near a burning Cirencester) we transferred the action to the tabletop, and fought it out using my miniatures and To the Strongest! rules.  The Britons formed up in a huge mass with chariots to the wings and the laager to their rear. 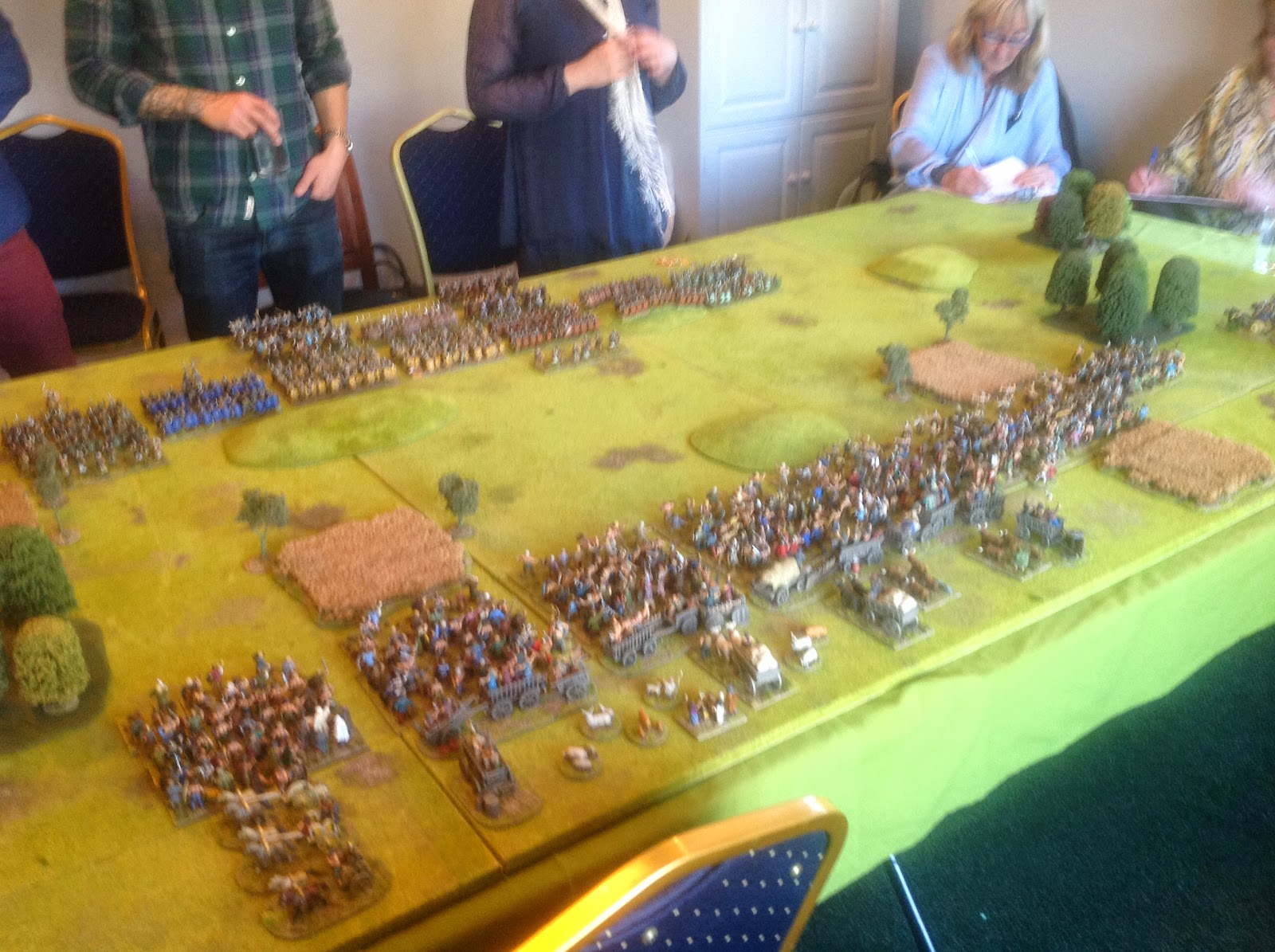 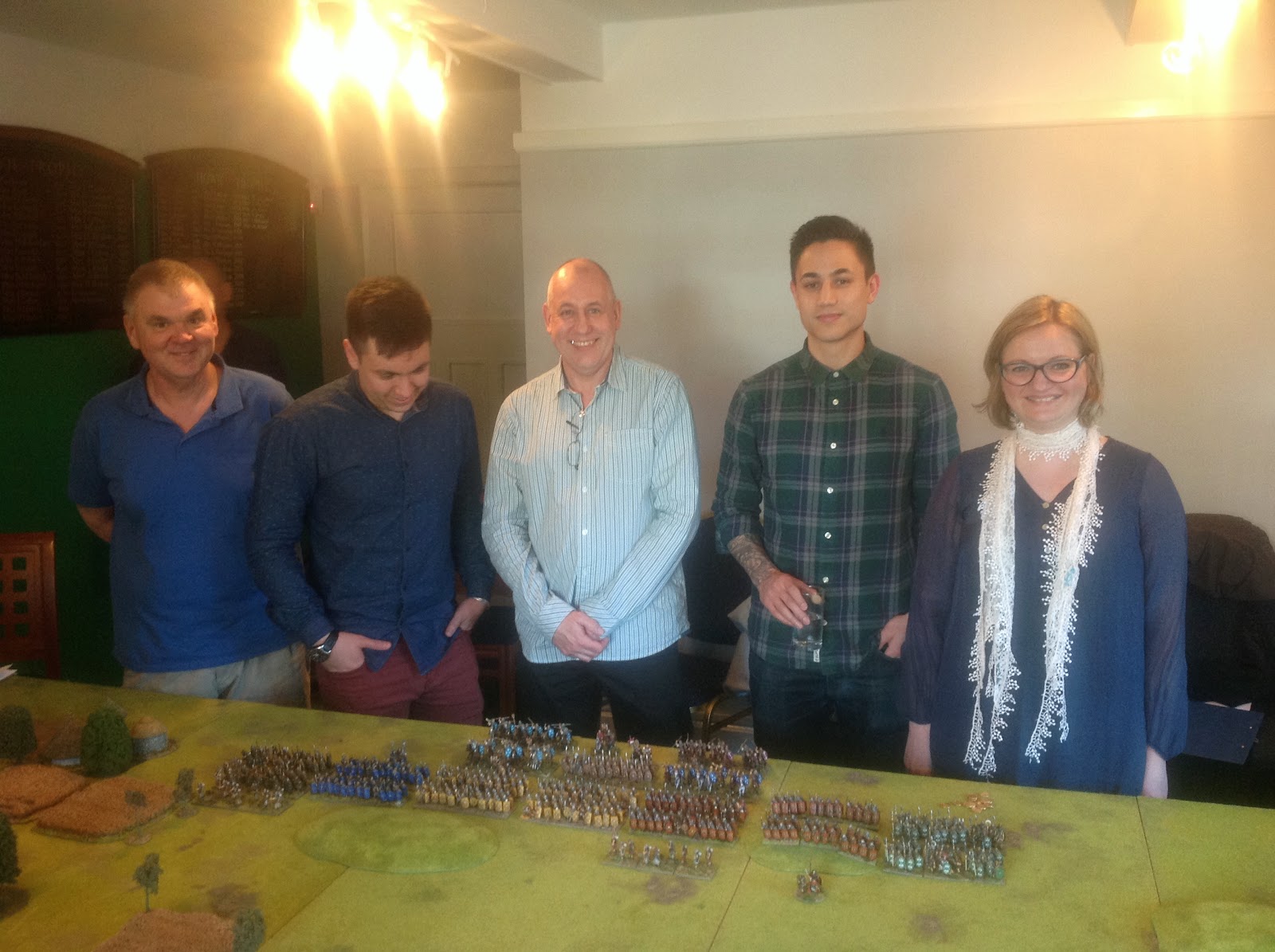 Above are the Romans, and below the revolting Britons.  Most of the players were novices, but there were four gamers mixed in. 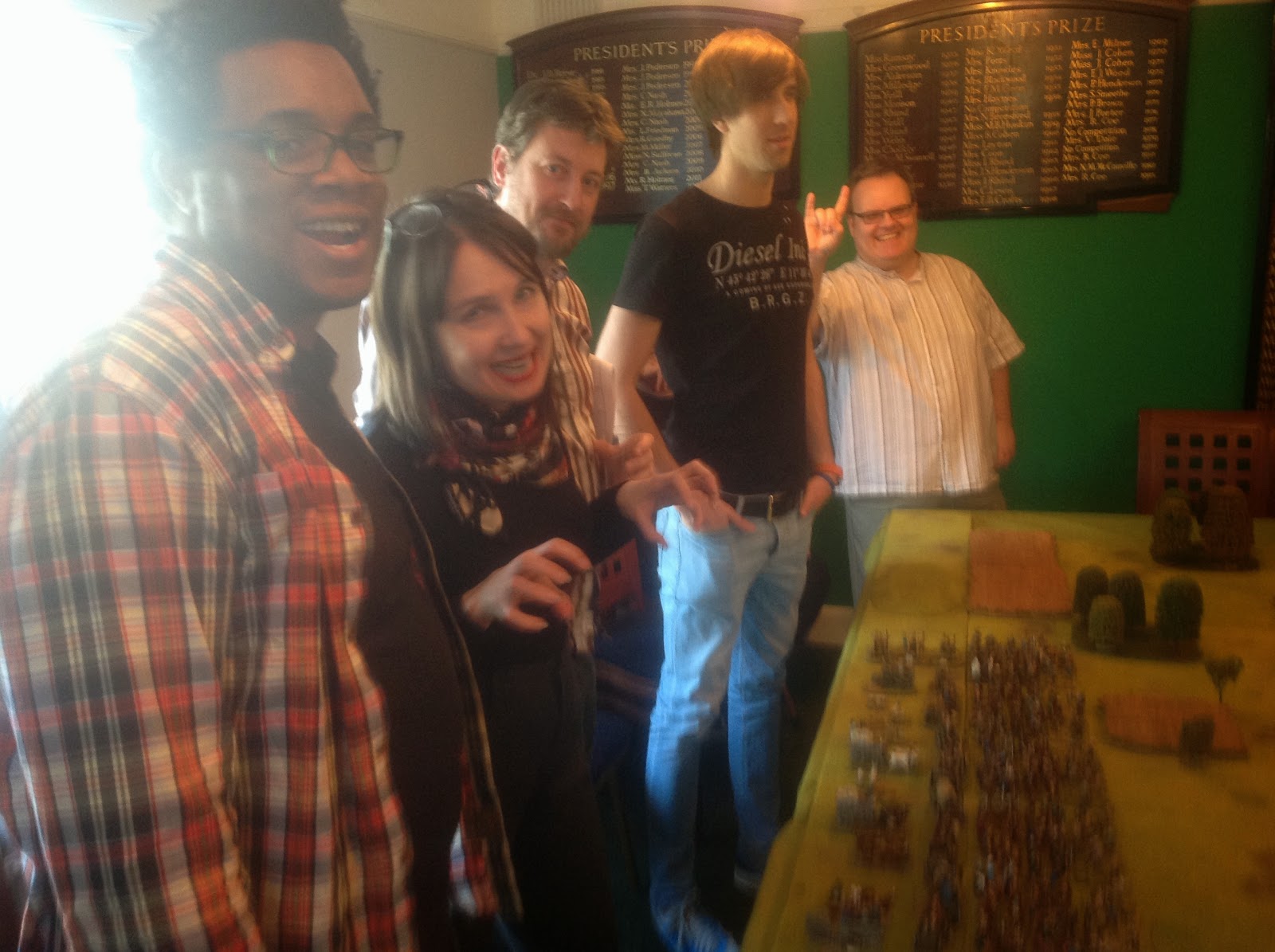 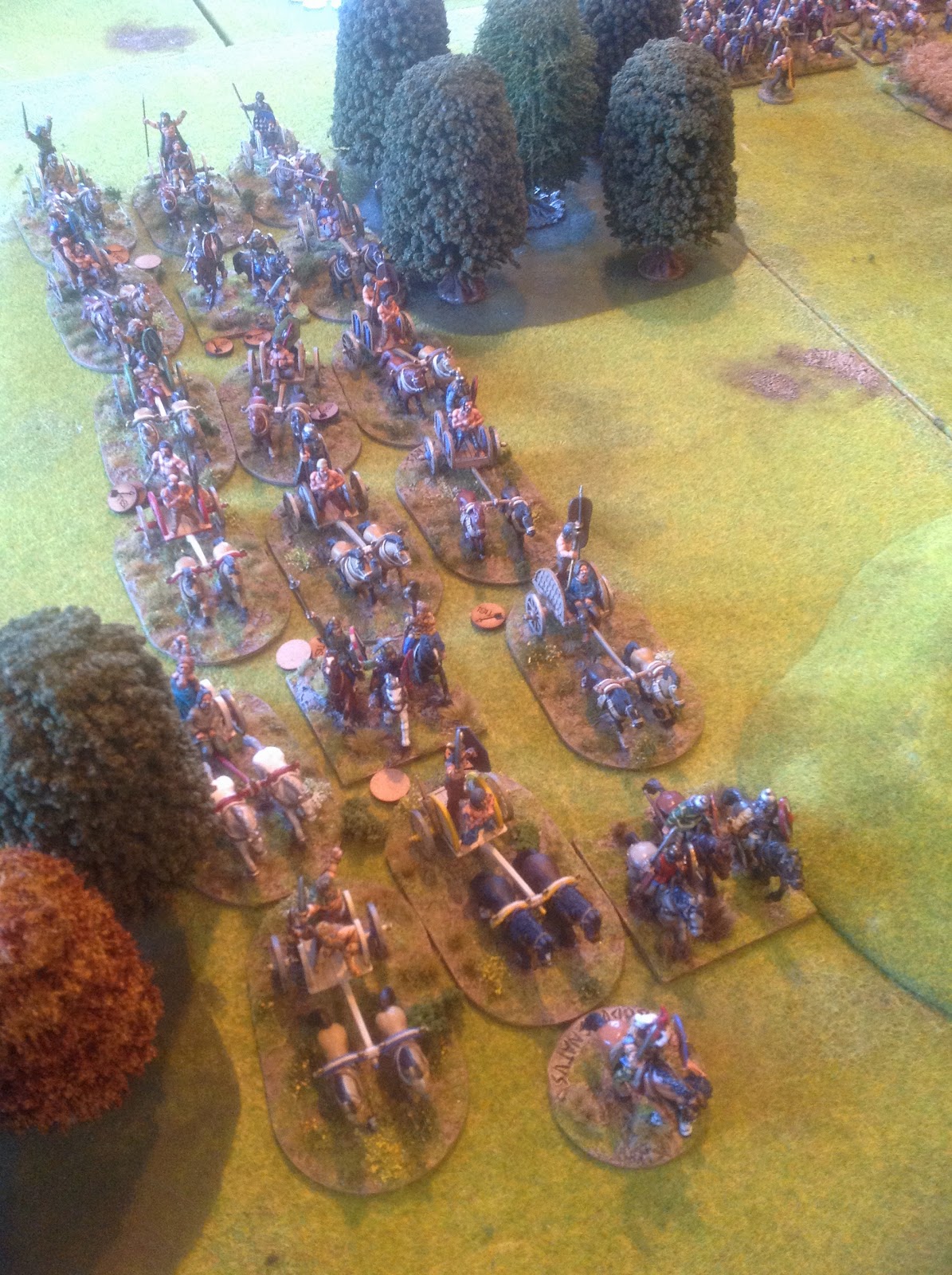 Above, a flanking move by one of the British chariot wings.  Below, other British chariots that had launched an unexpected flank attack, sweep around behind the Roman lines. Because of time limitations, we only had around an hour-and-a-half to play the game, and consequently didn't get to finish it. Some of the non-gamers picked the rules the rules up well, others found them challenging to master in 90 minutes. I am currently writing some even simpler rules that should enable the same game to be played by non-wargamers in under an hour.

Below is my favourite shot, from behind the British wagon laager.  I'll take proper photos of the laager in a few days, when I have more time. 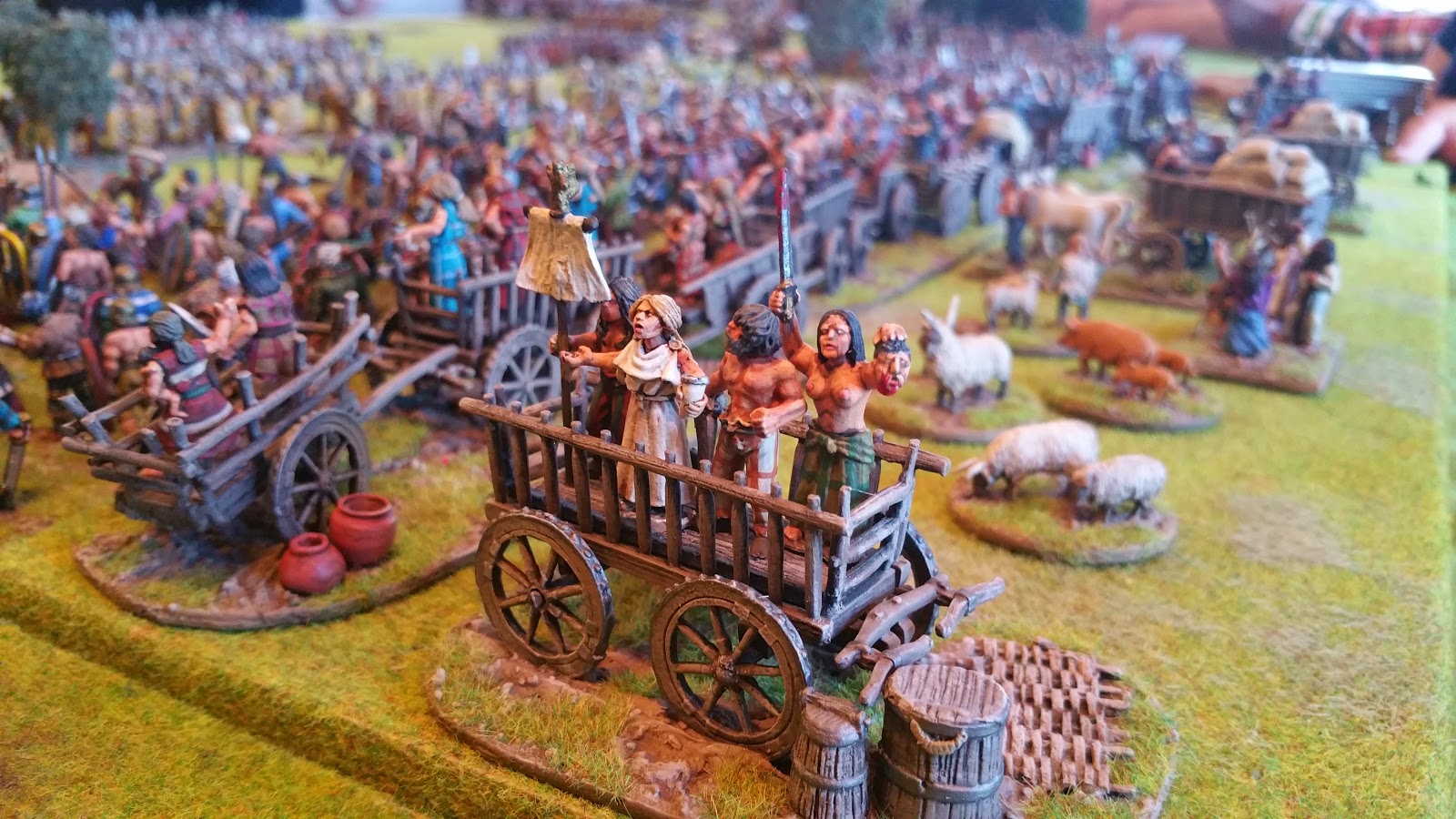 With time running out awarded a marginal victory to the British, largely for not having lost to the far superior Roman legionaries!  It was a splendid day of gaming; I am sure I shall repeat it.
Posted by BigRedBat at 16:26 No comments:

Meeples and Miniatures 140 - To the Strongest!

I was recently interviewed by Neil Shuck and Mike Hobbs of Meeples and Miniatures Podcast fame. We talks a great deal about why I wrote the game, how it works, and the potential merits of substituting Vodka shots for Victory Medals. It was a lot of fun!

The interview can be downloaded from here:

I shall be downloading it shortly, and will probably be wincing for much of the rest of the day.


The lack of posts this week has been due to the preparations for a campaign and large wargame yesterday. This was unusual in that it was aimed at (and largely played by) non-wargamers, and observed by a team psychologists. It went very well indeed; I'll post some pictures tomorrow.  In the meanwhile, here is one to be going along with! 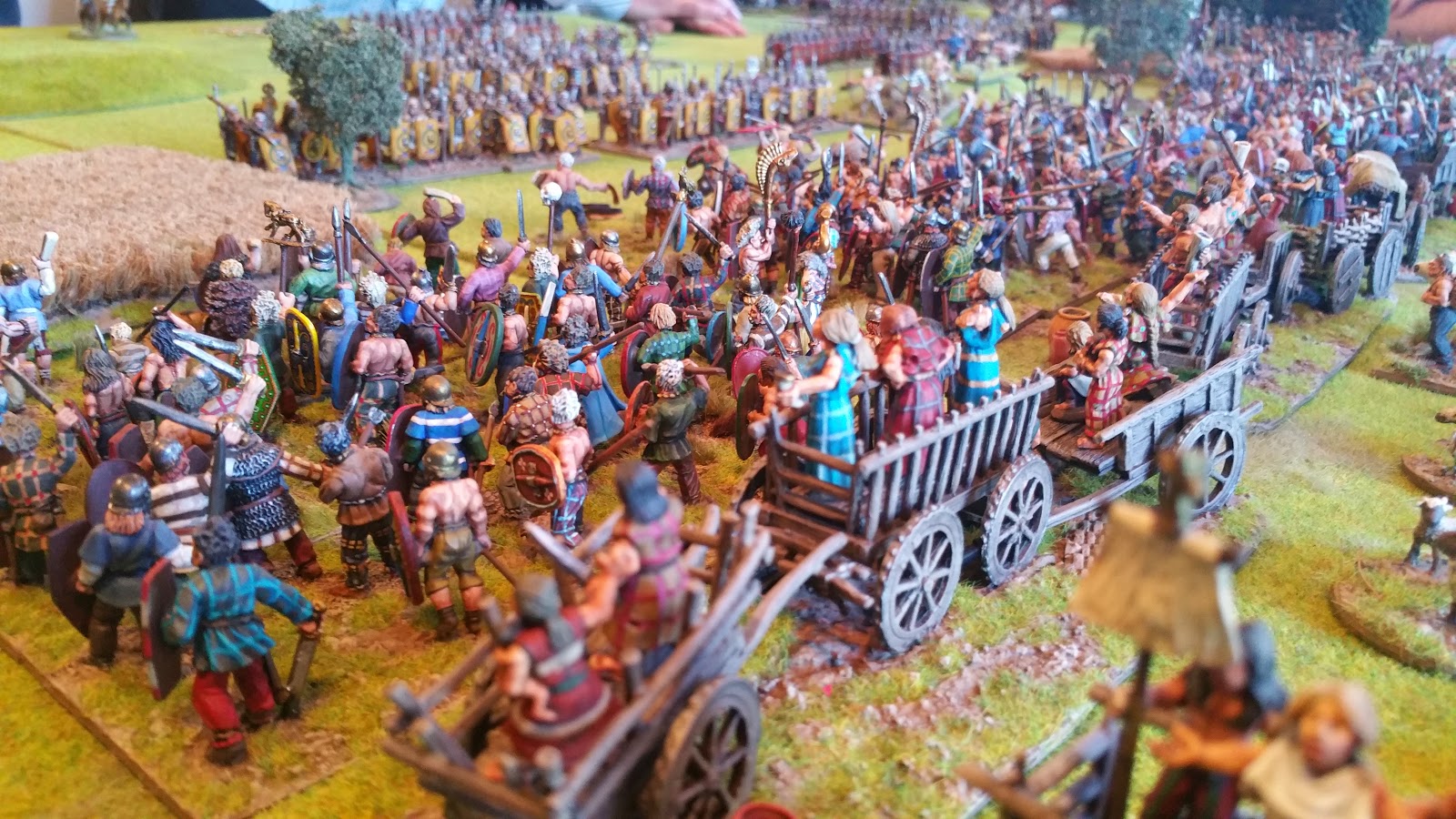 Posted by BigRedBat at 12:56 No comments:

I've just spent two-and-a-half hours flocking minis using my Heath-Robinson static charger. At one point I "crossed the beams"; there was a terrific zapping noise, an element flew up into the air, and the distinctive smell of burning hair. I was a little more cautious after that. 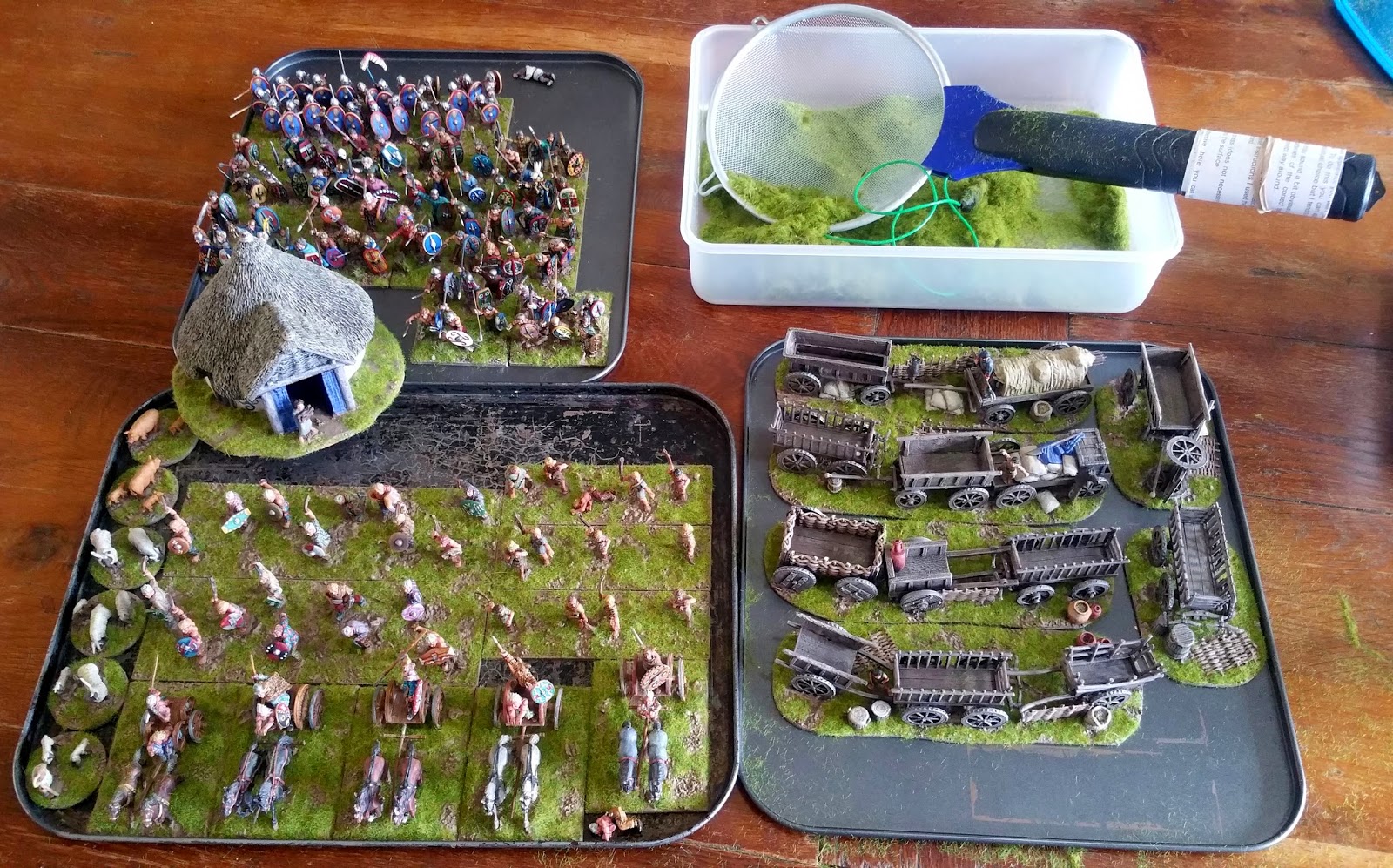 This evening, once everything is dry, I plan to add tufts and other foliage.


This week I've been working on some army lists for To the Strongest!, notably Franks, with the assistance of Paul Caspell. It's been very interesting; they are an army I knew little about.  Another army for my "to do" list!  n.b. they won't be posted for a few days as they need to be checked first.
Posted by BigRedBat at 14:22 No comments: