In-action shots of Raphia at Salute

Yesterday at Salute I was so busy failed to take a single photo, but happily chum Ian shot some lovely pics of our game. Most of the photos were shot during play and you may be able to make out chits, playing cards and ghostly hands, here and there.

Huge thanks to the team who worked so hard to set out  run the game- Ian Notter, Andrew Brentnall, Shaun McTague, Mike Brian, Mark "WHC" Freeth and Chris Cornwell. Many of the minis were painted by Shaun McTague and Craig Davey and some by Nick Spelller- hi Nick! The minis are a mixture of Foundry, Polemarch, Crusader and others. Most of the elephants are lovely Aventines.

Many thanks to the players- too- who really seemed to enjoy themselves! The first game was played in just over an hour, which absolutely astonished me and must be some kind of record for a 1600 mini game. The Seleucids won both games, although Antiochus was killed in the second one which was, therefore, something of a Pyrrhic victory.

Salute was a great show- although the venue is somewhat impersonal its meeting the people and many friends that makes it, for me. The Warlords organisation this year was extremely efficient and professional. A big hi! to every one I chatted with and to everyone I missed!

On a final note, I have extended the current "To the Strongest!" rules sale to midnight tonight, for people who saw the game and want to buy a set with a 25% discount (or anyone else for that matter!). You can find them here:

Posted by BigRedBat at 10:22 No comments: 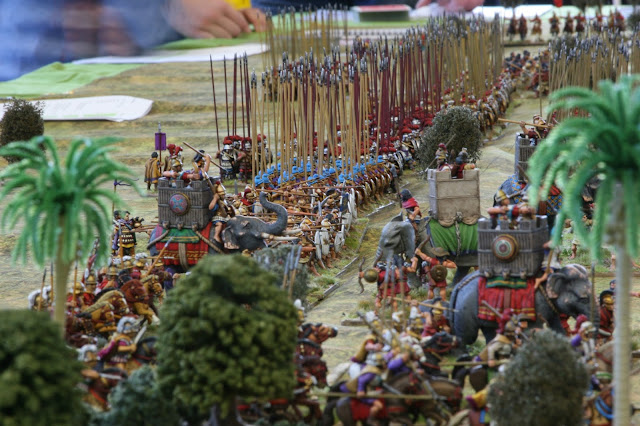 On Saturday I'm taking Raphia to Salute; I hope to see as many of you as possible, there!

We will be on stand GG08 which is a great central location! I'll be running it as a participation game- once at 11AM and again at 2PM.  If you fancy playing, please mail me at simonmiller60 (a t) gmail (d o t) com and I'll book you in. 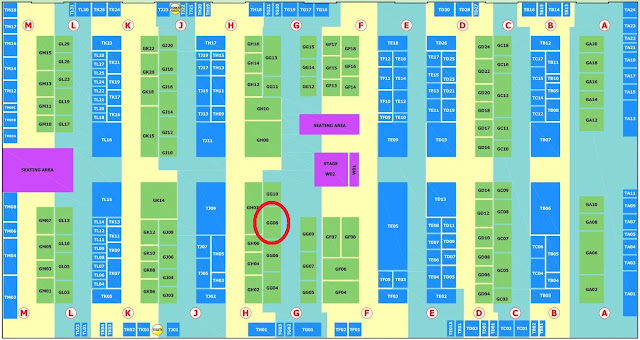 In other news, I currently have a 25% off sale on the rules- if you don't already have a set, you can find them here!  I won't be selling anything at the show- will be far too busy chatting.  :-)
Posted by BigRedBat at 00:48 No comments:

Fun at the Wargames Holiday Centre

Last weekend I decamped to the WHC "Annex" with a fair proportion of my collection, for a jolly weekend's gaming. I call it the "Annex" because there were too many games to fit in the WHC proper, so Mark and I hired a suite in the hotel where the gamers stayed. This proved very comfortable and convenient, and maximised both gaming and drinking time! Some of the gamers took full opportunity of this and looked a little ragged on day two, mentioning no names, Andrew.  ;-) 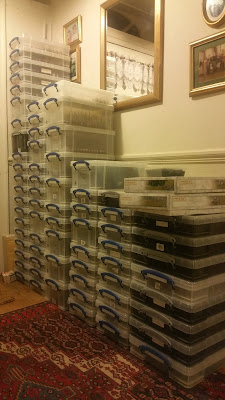 Above is the pre-game packing, and below the fully-loaded BigRedBatmobile. Minis and terrain for four games (AndrewBrentnall brought the fifth). 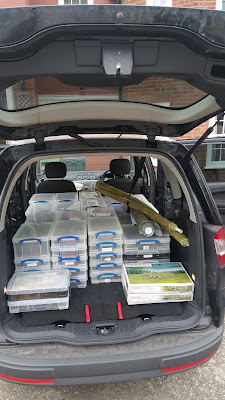 Here are photos of the games, in no particular order. 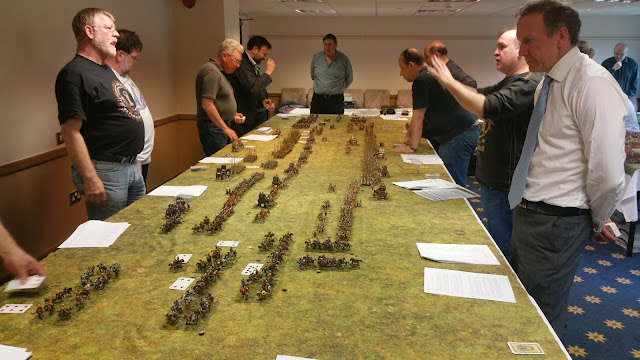 The largest battle was Ipsus 301 BCE (above and below).  This had over 2000 miniatures and was 18' long, played on a special mat which Deep-Cut tell me is their largest they have ever made. I've just sold another one, so there are two of them, now! Below is a new elephant in his first battle. 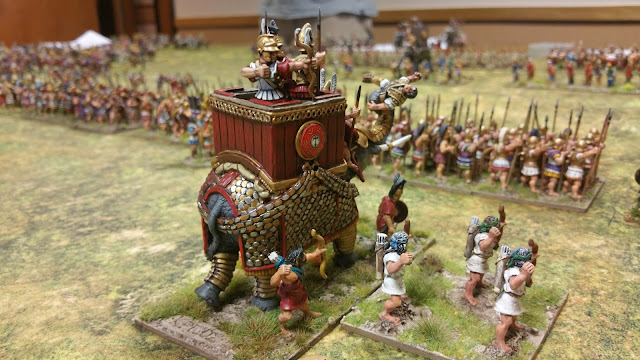 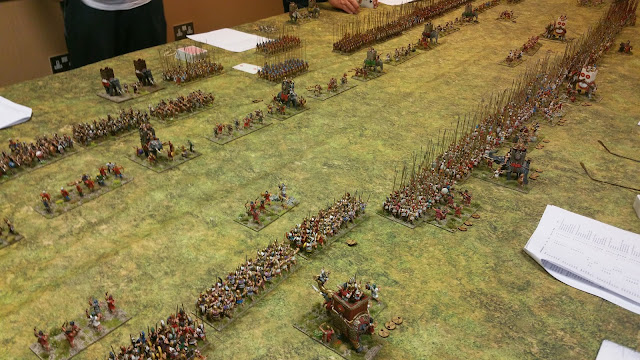 Above is a view of the central sector of the Ipsus battlefield. 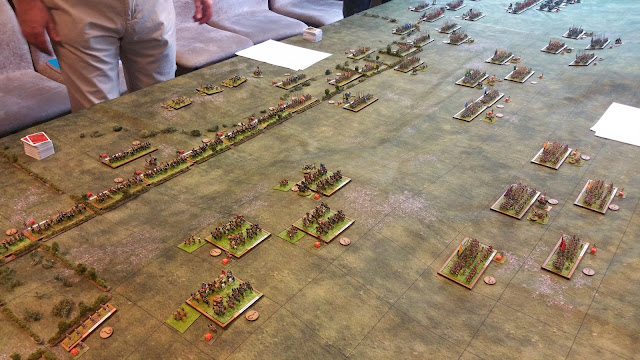 Chum Andrew Brentnall ran a splendid Edgehill battle in 12mm, above and below. This was very popular- we will be running it at Partizan in May, and for the Uxbridge boys (who missed out on the chance to play) if I can think of a way. The new ECW rules worked seamlessly. 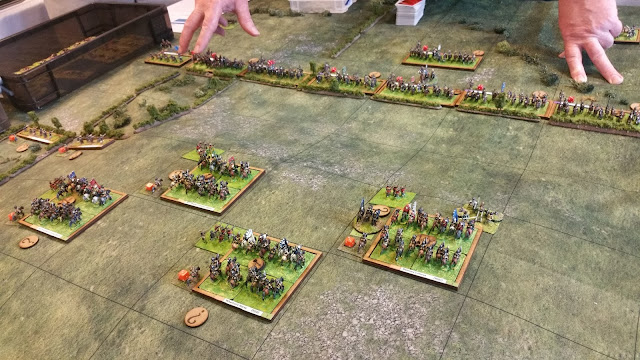 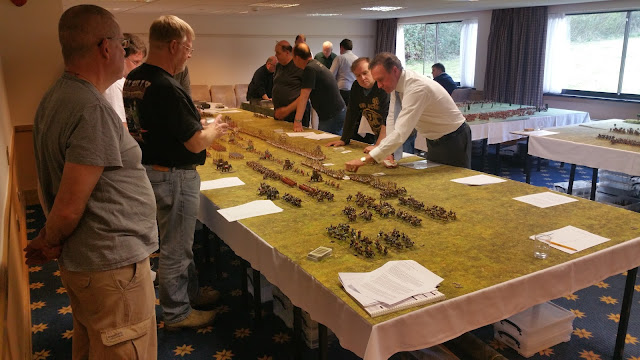 More shots of Ipsus, above and below. 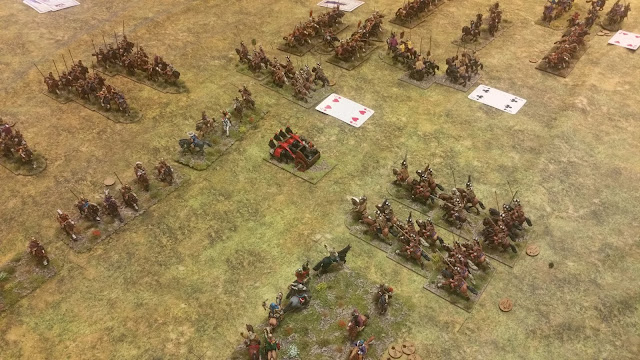 Above, scythed chariots inflicted terrible blue-on-blue casualties in several of the Ipsus games. Ipsus is so large it can take up to a dozen players at a time- most of the other games took six. 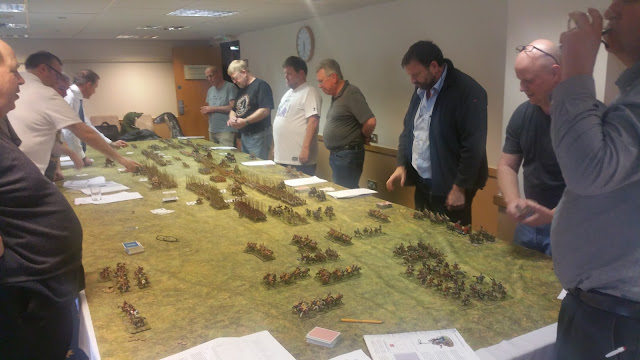 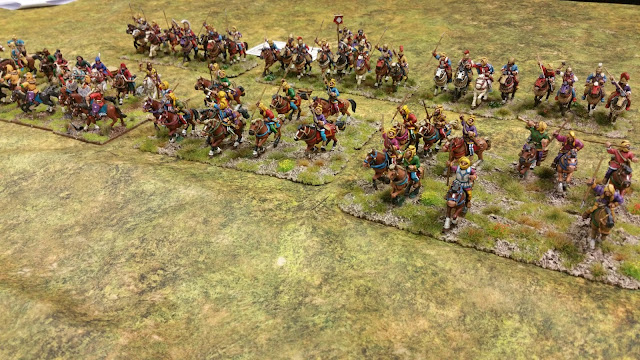 Above my new Persians, painted by The Shauns (Watson at back, McTague at front). 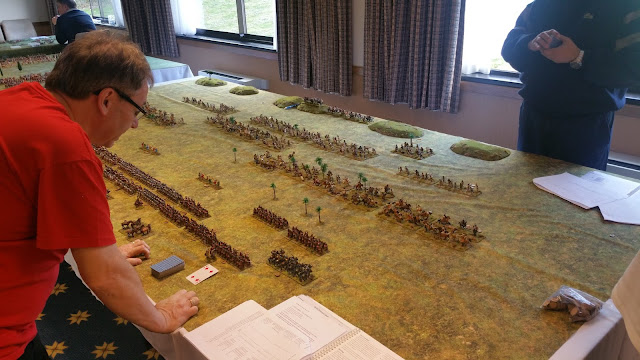 This battle above and below is Ruspina, 46 BCE. It's a an interesting, asymmetrical game with hordes of Numidians surrounding Caesar's recruits. It was very popular- fought four times I believe, with victories to both sides. 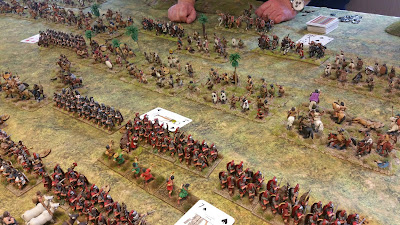 Above- Romans attack at Ruspina- you can see the playing cards that most people use with To the Strongest! 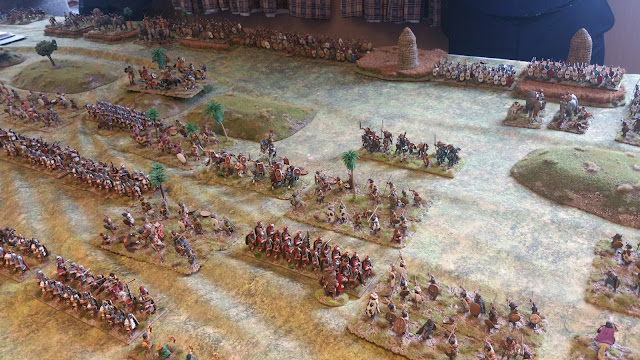 Ruspina- the Romans glimpse the cornfields beyond the ridge-line, and a mass of Numidian reinforcements (including elephants, below)! 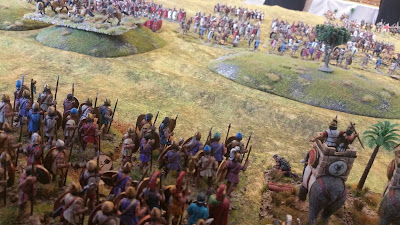 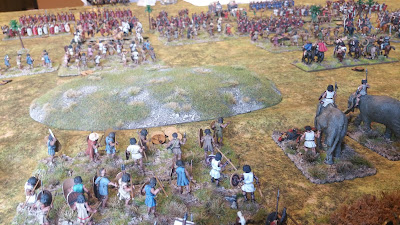 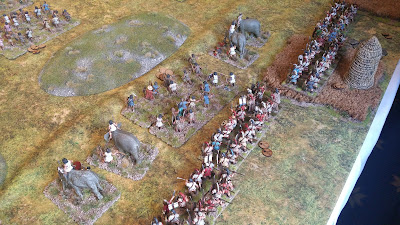 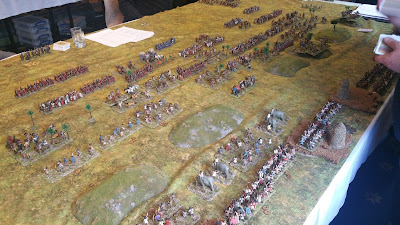 Ruspina again- Roman baggage can be seen, below. I have lots of pack mules now. 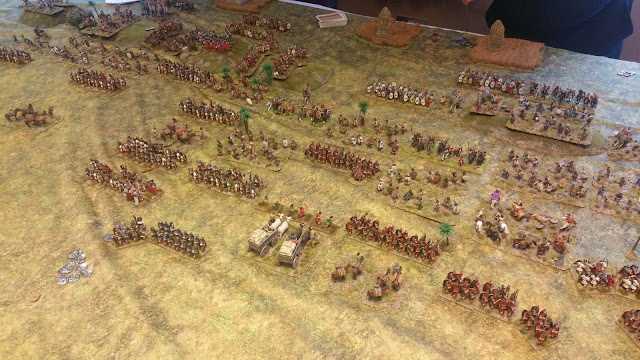 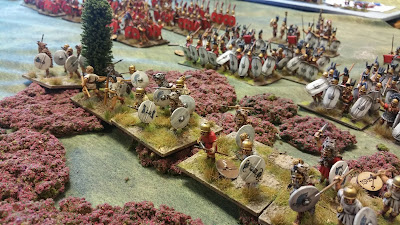 Above and below- the Metaurus. Velites above race Gauls (below) for the ridgeline- the velites take it! I am very proud of my heather. 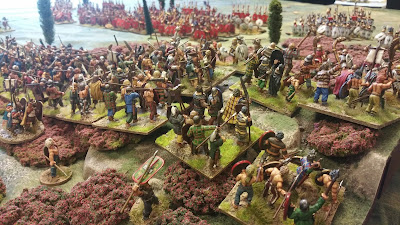 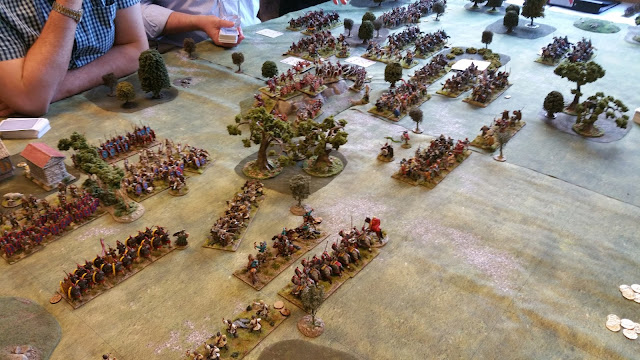 And last but not least is the Frigidus, the Eastern and Western Empires slog it out to see whether the Christian East or resurgent pagan West would triumph. 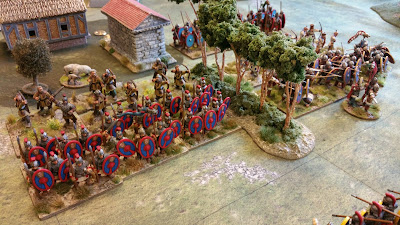 Above, the Leones Iuniores defend the valley for the West. Below, there were lots of Goths in this battle. 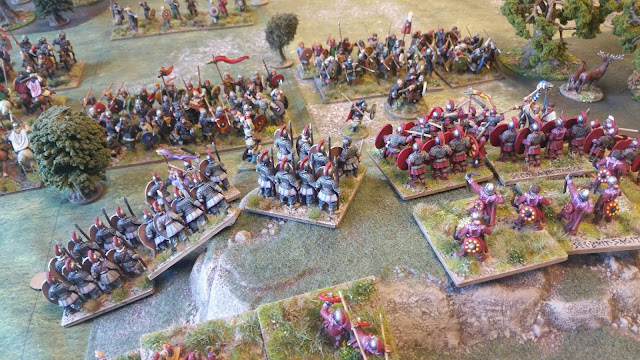 ...and lots of cavalry!  The unit in the left foreground, below, is on my 20cm grid deep base- the back strip has been placed at an angle, to show that it is disordered. 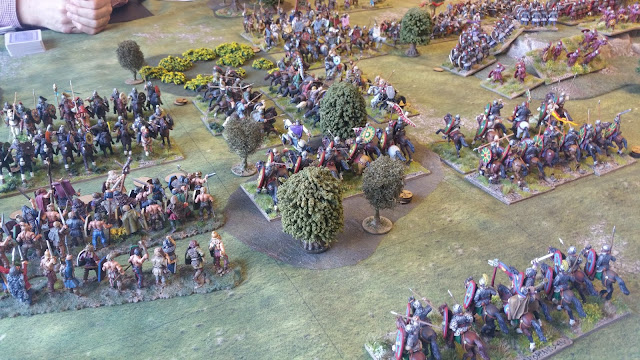 So these are the only photos I managed to take, I hope you enjoyed them! I now have a relative lull until the next WHC event*, which will probably be in October. I'm thinking about games for this- one will be definitely be Leuctra with a super-deep Theban phalanx.. If you fancy coming along drop me or Mark Freeth a line and we'll let you know dates.

*(Aside from finishing the ECW rules and basing my ECW army).
Posted by BigRedBat at 21:58 No comments: