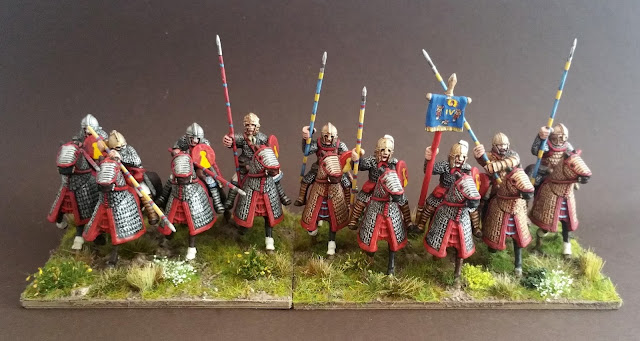 These superb cataphractoi were painted by Shaun Redzed Watson, who very kindly sold them to me last year. I have rebased them and named them after one of the units from the Eastern empire, the Fourth Parthian Clibanarii. We don't know exactly how clibanarii differed from cataphractoi. In my armies, the eastern clibanarii will ride half-armoured horses, 'cos that's how the minis came! 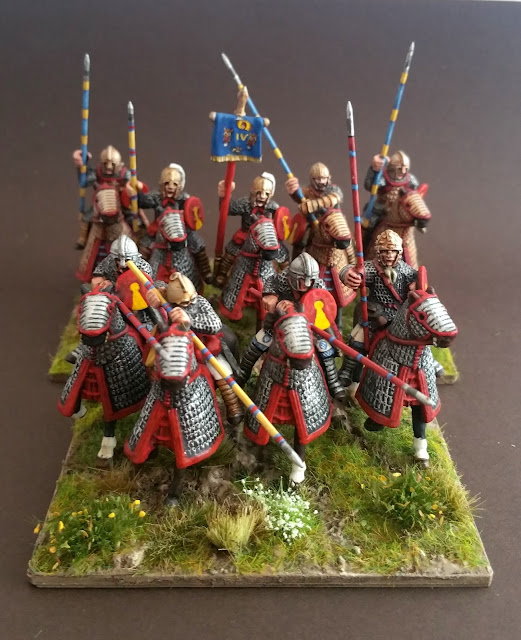 The basing is a bit of a departure for me; instead of the normal 3 bases for  a units, I have divided them into 2, so that they can either form a deep wedge or a line as I choose.

I am really delighted with them!  It is very likely they will be on the table next Sunday at Partizan for the very large game that I'm putting on with James Morris, Steve Jones, Scrivs and Mog. If you are coming to Partizan and fancy playing, please drop me a line!
Posted by BigRedBat at 14:09 No comments:

Email ThisBlogThis!Share to TwitterShare to FacebookShare to Pinterest
Labels: cataphracts 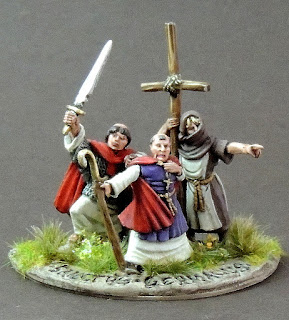 Saint Germanus was the Bishop of Auxerre who visited Britannia in the 5th Century to combat an outbreak of Pelagian heresy. Whilst there he supposedly led the Britons to defeat a large Saxon and Pictish raid in what is sometimes referred to as the Alleluia Victory.

I have re based these lovely figures painted by Shaun Watson (Redzed) as a command stand for a projected Arthurian-era Romano-British force. I believe the minis  are Westwind, and the stand itself is half round, designed to be placed in front of a unit as an attached general in TtS! terms.

It would be fun to have a mini campaign with a fervent continental bishop wandering around Britain, suppressing heresy and battling foreign invaders.
Posted by BigRedBat at 10:14 No comments:

The Equites Dalmatae Passerentiaci are a unit from the command of the Magister Equitum in Gaul. On his Notitia site Luke Ueda-Sarson suggests that Passerentiaci refers to a place, perhaps Passaro in Epirus - it might just possibly be a nickname "sparrows." Shaun Watson (Redzed) painted these for me, lovely jobs, except I hand-painted the shield designs based on Luke's page.

These chaps will be veteran light cavalry with javelin in TtS! terms and will likely get their first outing at Partizan in two weeks, when I am planning a big Late Roman game with various chums.
Posted by BigRedBat at 15:56 No comments: 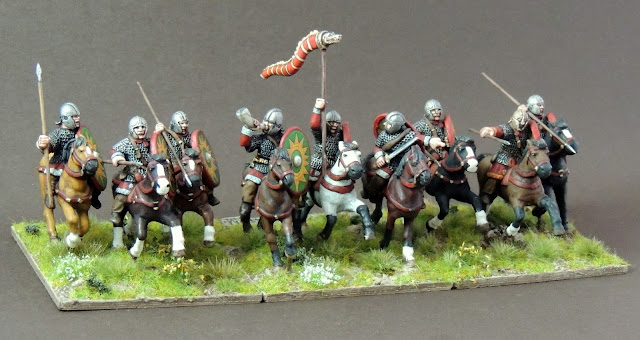 This unit of late Roman guard cavalry were superbly painted by Shaun Watson (Redzed); I merely had to apply shield transfers and base. Most of the minis are Gripping Beast, and very nice minis they are, too. This is the first of four new Late Roman cavalry units for a planned game at the Wargames Holiday Centre in November. 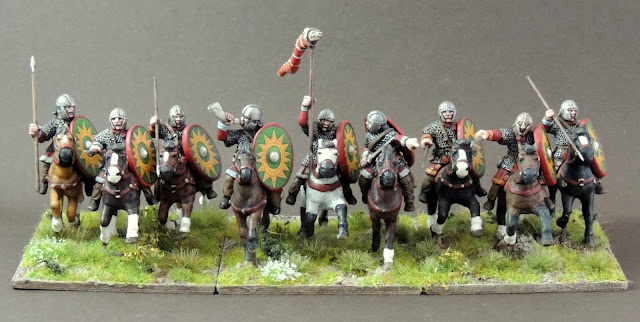 Posted by BigRedBat at 13:10 No comments:

This is a unit of Aventine Roman Equites that Shaun Watson (Redzed) painted for me, that I've finally finished basing. They are lovely models that will guard the right wing of my Polybian legions. Now I need to get some more Italians allies painted up for the other wing. 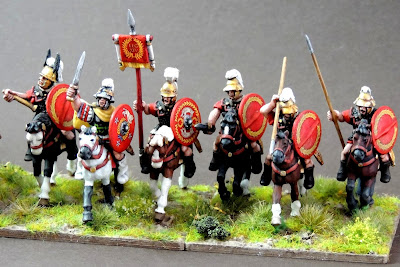 In other news, over the last few weeks I've uploaded another bunch of army lists for To the Strongest!


They can be downloaded for free from the BigRedBatshop. I'm on a bit of a roll with the Medievals and expect to publish the various Medieval Russian lists this week.
Posted by BigRedBat at 20:31 No comments: 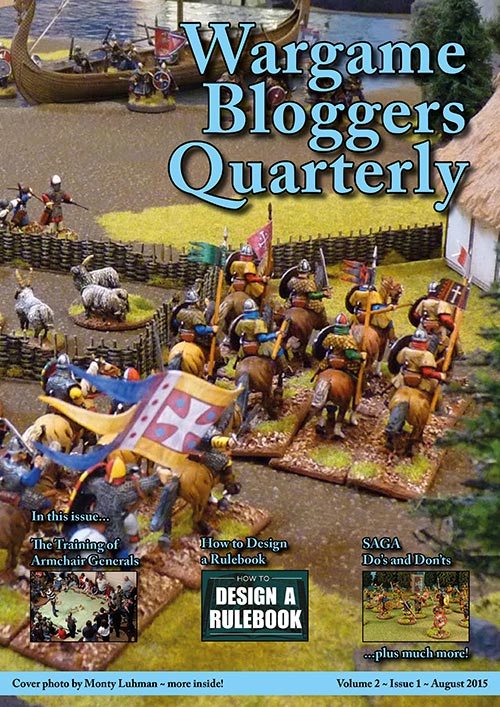 Download your free copy, right away!
Posted by BigRedBat at 23:44 No comments:

Fun at the Wargames Holiday Centre 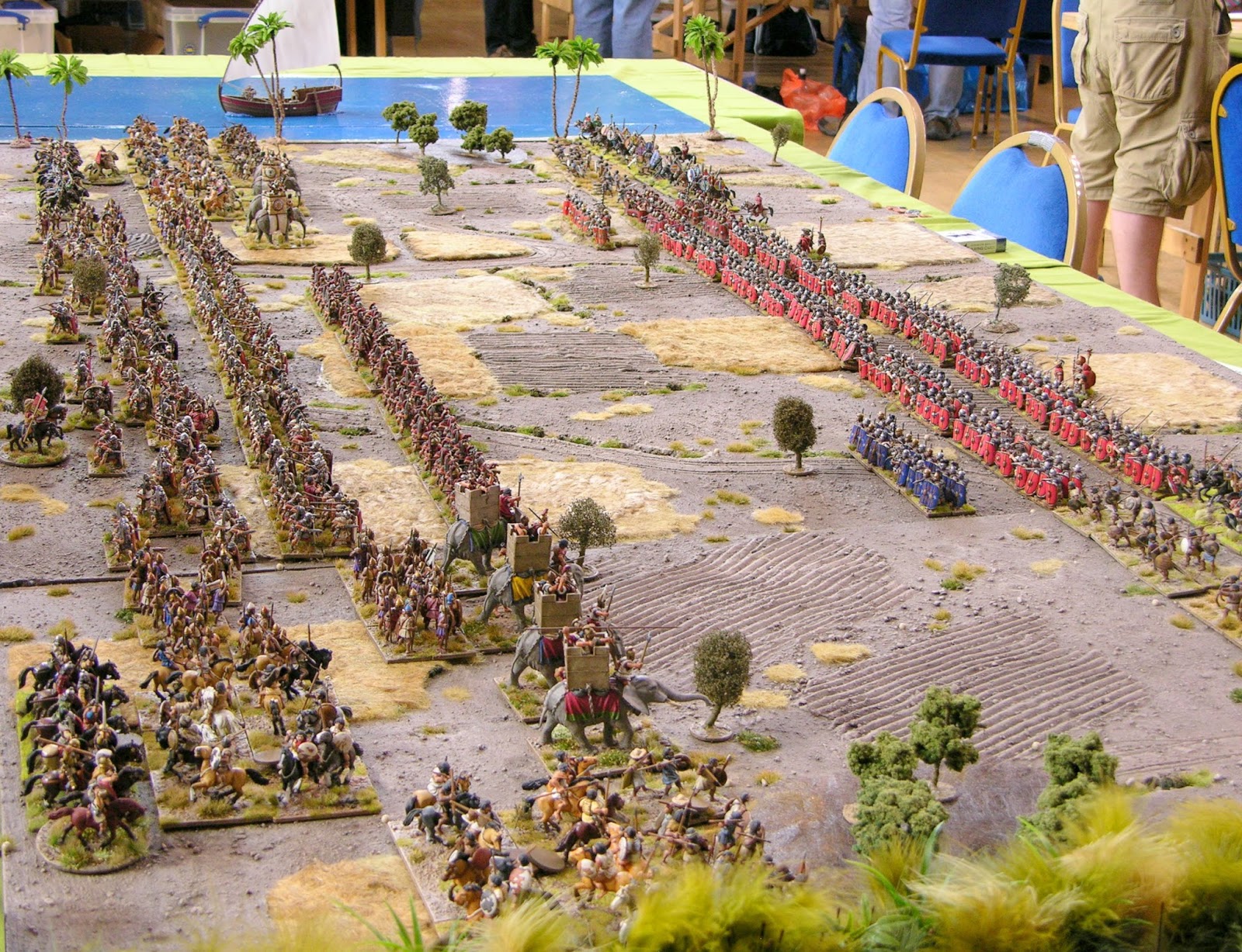 I have another weekend of To the Strongest! gaming at the Wargames Holiday Centre near Basingstoke on the weekend of  6th to 8th November.  The games I anticipate running include:

There will be as many minis of as my car will carry - and I have a very big car!  :-)  We usually have three or four games set up at a time and people get to play most or all of them over the course of the weekend. If you've not played before I can instruct and give you a rule book to take away at the end.

We usually stay in the local Hilton which is very nice and surprisingly cheap.  A fine time will be had by all!

Best, Simon
Posted by BigRedBat at 14:49 No comments:

I've not given up painting, honest...

...I've been working on too many things simultaneously to actually complete any of them. Here are the painting trays, which are packed with beautiful minis painted by Redzed that I've been basing. Five units nearly finished.

There is a regiment of Republican Roman cavalry, two of Late Romans and two of Goths or Vandals. I have some more minis painted by Saxon Dog that I am going to base as a third regiment. One day I'd like to play Adrianople. Proper photos to follow in due course.

In other news, I've been chatting with Bill at Footsore Miniatures. When his US website is up he'll be selling my rules over the other side of the pond. He has started a lovely Irish army for To the Strongest! for a Clontarf battle he is planning, have a look here!
Posted by BigRedBat at 11:08 No comments:

Last of the Romans

During our recent family holiday I was lucky enough to be able to visit the church of San Vitale in Ravenna, to see the stunning Byzantine mosaics there. 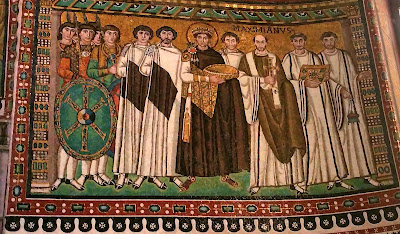 Above is the photo of Emperor Justinian, with religious figures on the right and guards on his left. It has been suggested that the bearded figure immediately to Justinian's left is Count Belisarius, which is partly why I wanted to see the mosaics! I very much hope to raise a Belisarian Byzantine army at some stage. The shield is stunning, such vivid colours. 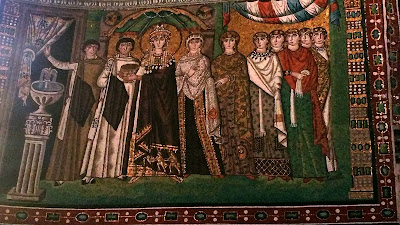 Above is the Empress Theodora with ladies in waiting. 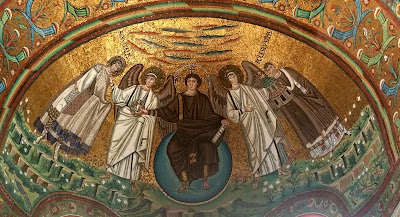 And finally Christ Pantokrator, echoing Justinian who appears to have had something of a messiah complex.

The mosaics are absolutely stunning and well worth a visit; also don't miss the small mausoleum behind the church where you can see some beautiful mosaics really close up.

I'm just finishing some basing and will have some wargames material to post soon.  Finally, if you play "To the Strongest!", I've recently been putting up a bunch of new army lists details here; there will be several more to follow over the coming week.
Posted by BigRedBat at 14:29 No comments: