These are the last of the figures from Craig Davey, which I've supplemented and based to form the greater part of a Late Roman legion. The Secunda Britannica (or the Secundani) were the descendants of the old British II Augusta legion that had been based in Caerleon for much of its history. In the Late Roman period they may have been withdrawn to Gaul to deal with the various crises on the frontiers.

This legion has two units of accompanying light infantry, one of javelinmen and one of archers.

I really like the conversion that Craig did on the light infantryman, giving him the trumpet from a cavalryman. All of the shields are hand painted; I was reasonably successful at matching Craig's style. Later I will need to paint another 24-man unit, because I want the legion to be twice the strength of my auxiliary units, and a command stand.  This will involve a lot of work, on account of the shields, of which I can only paint 3 or 4 in an evening. With the new units and the cavalry I now have a quite respectable Late Roman army, and am going to spend a little time touching up the Picts who they will be fighting.
Posted by BigRedBat at 11:16 No comments:

The Equites Honoriani Seniores are the first of four units of Late Romans that my friend Craig Davey very kindly sold me earlier this year, that I've recently based. The photo is clickable.

The Honoriani Seniores are a vexillationes comitatenses cavalry unit, briefly discussed on Luke Ueda-Sarson's excellent Notitia Dignitatum site.  Their shield design features a pair of blue wolves (or bears). Some suggest that they may have been recruited from Taifals, a Germanic tribe defeated and settled within the empire.  They appear under the Gallic field army, but were seconded to the Comes Brittaniorum.

Craig did a lovely job on these, including hand-painting the shields.  They form a very timely reinforcement for my Late Roman army, which will be out for a run at the Wargames Holiday Centre next weekend, when they will (perhaps) be giving my Picts a good kicking.
Posted by BigRedBat at 16:59 No comments:

Chairman of the board

Today I've managed to cut and paste green flocked paper onto the additional 15 MDF boards I need for our unfeasibly large Pydna game at Partizan.  When combined with my existing boards, they will form an 18' by 5'4" table. 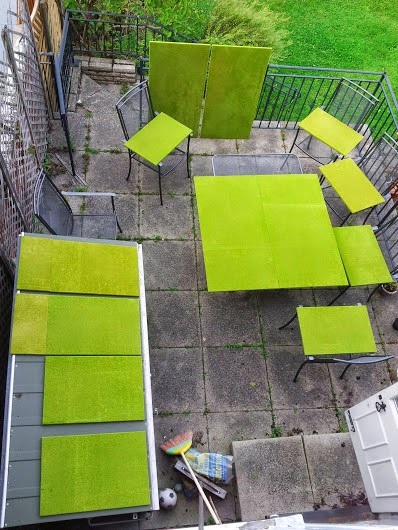 My joy at pasting these together is slightly confined by the fact that I have realised that they are in two subtly different colours; some in spring green, and some in autumn.  I'm hoping that this discrepancy won't be especially obvious, within the Stygian gloom of Kelham Hall.  ;-)
Posted by BigRedBat at 18:01 No comments:

These are the Aventine Allied Hastati I was working on before my holidays.  I decided to spend some extra time on them, to bring them up to my current standard. This included retouching, replacing some of the shields and partially re-basing them. 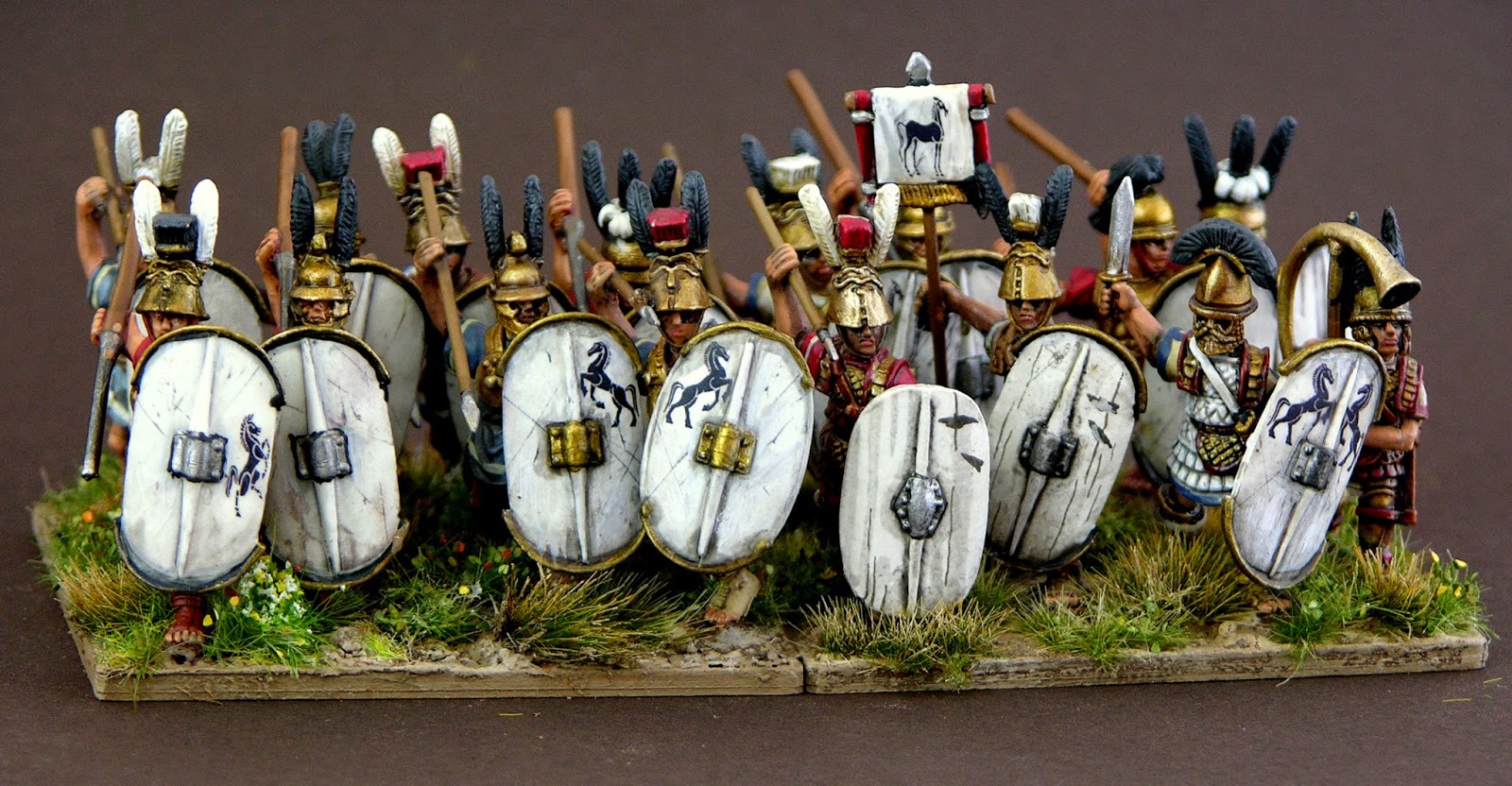 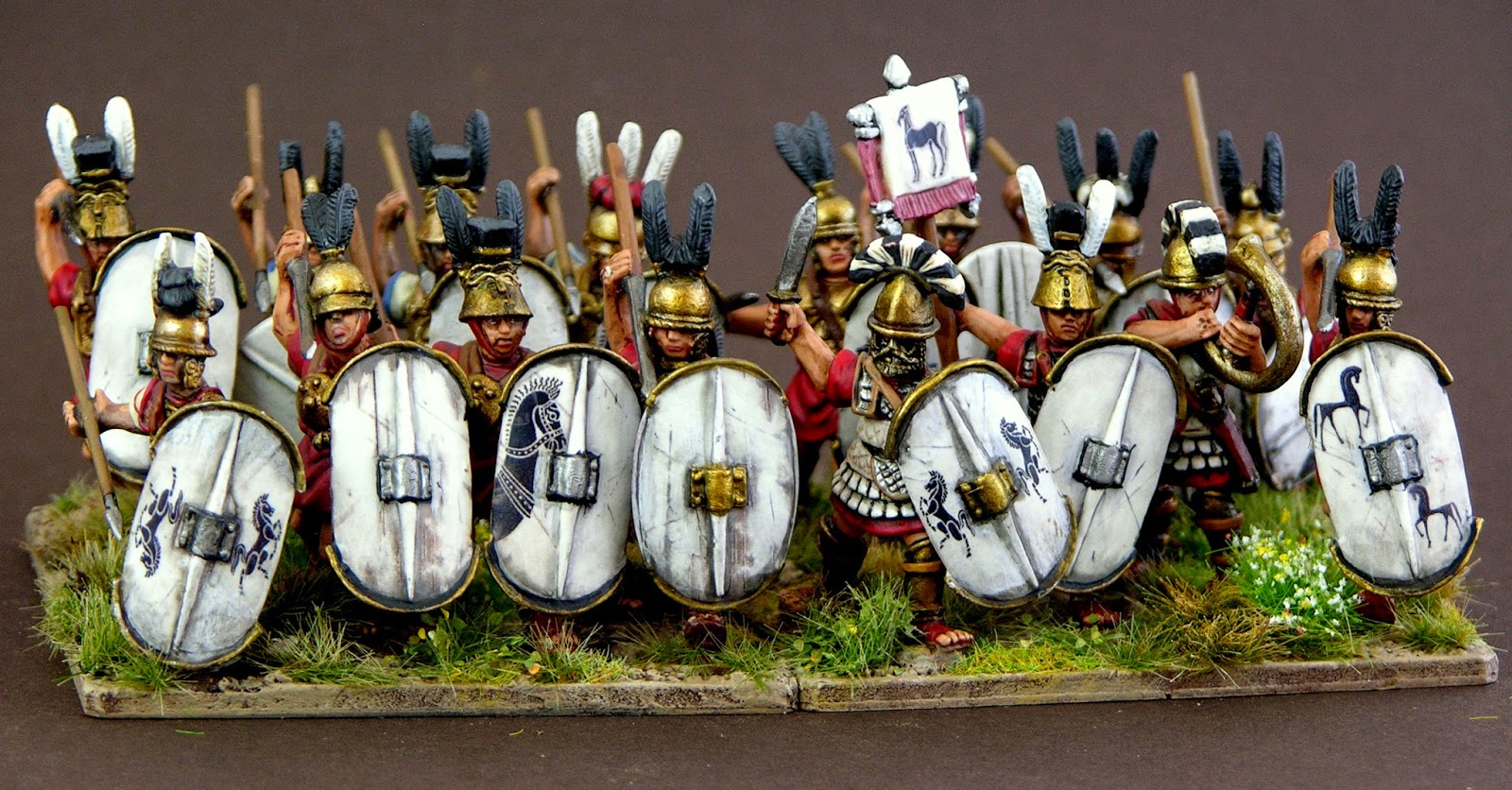 I also based up a very nice Aventine general and aide from Shaun (Redzed) to command the legion, which is now complete (and only 4.5 years late for Zama at Bletchley).  Better late than never!  :-) 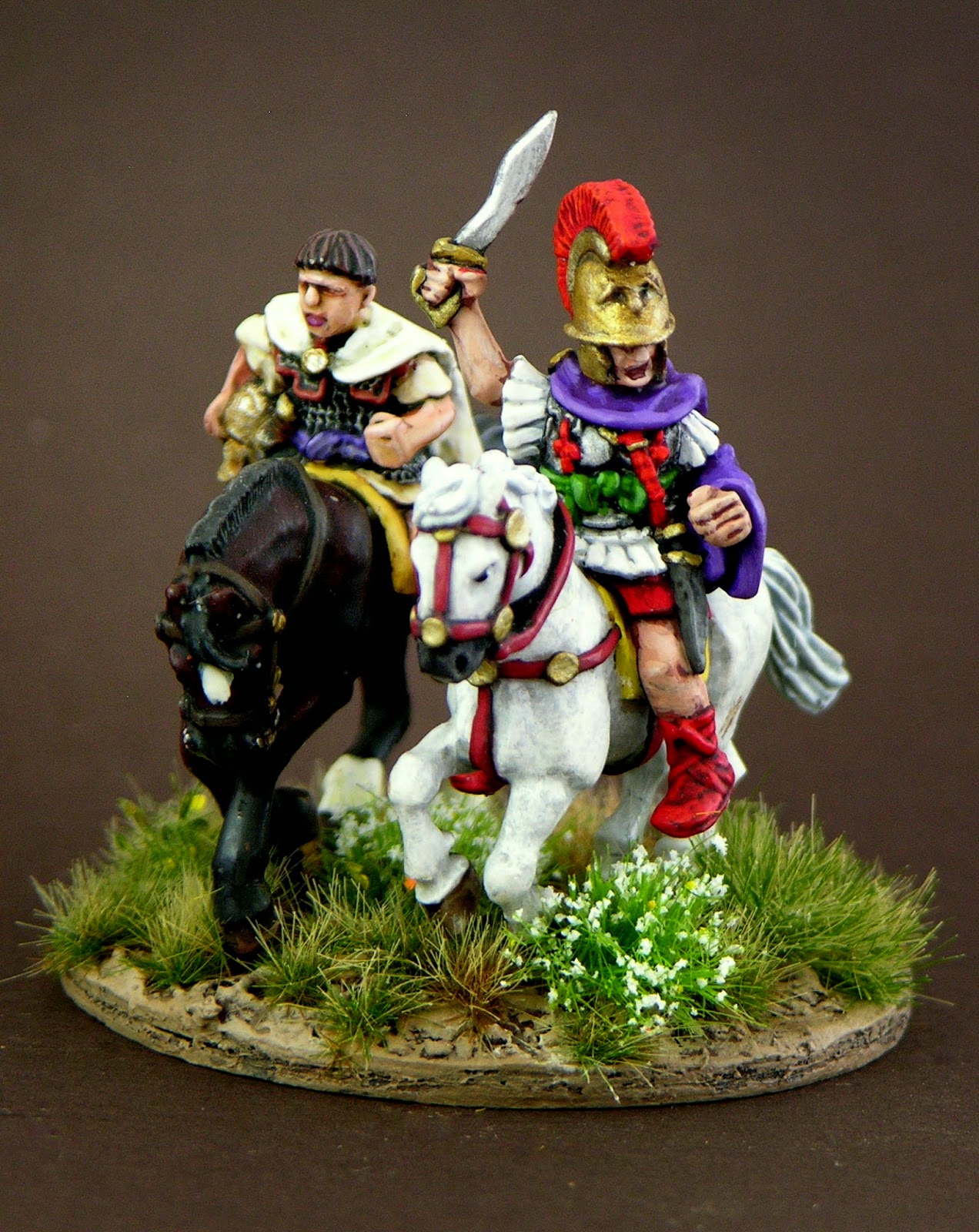 Their first proper outing will be at the Wargames Holiday Centre, on Saturday/Sunday week, where I want to blood them and also test out the mechanic for pike vs. pila that we will use for the huge Pydna game at t'other Partizan on the 7th September.

I gather that Mark Freeth still has some one and two day places for the second Ancient Rome at War weekend on 30th/31st August, so please drop him a line if you fancy yourself as a budding Scipio!
Posted by BigRedBat at 17:02 No comments:

I have just come back from a very enjoyable holiday in the Umbria area of Italy, to the east of Rome I took the opportunity to take some shots of the countryside, as in the future I might want to model the scenery for a future Battle of Lake Trasimene, or fighting in the area in later periods.

The scenery today is divided between flat-bottomed valleys, devoted to agriculture and ideal for warfare, and steep heavily wooded hills. The shot below depicts the view that Hannibal's Celtic allies might have seen down towards Lake Trasimene, although the plain at the bottom is probably rather wider and better drained than in 217BC.  Moreover, it was misty on the morning of the battle. 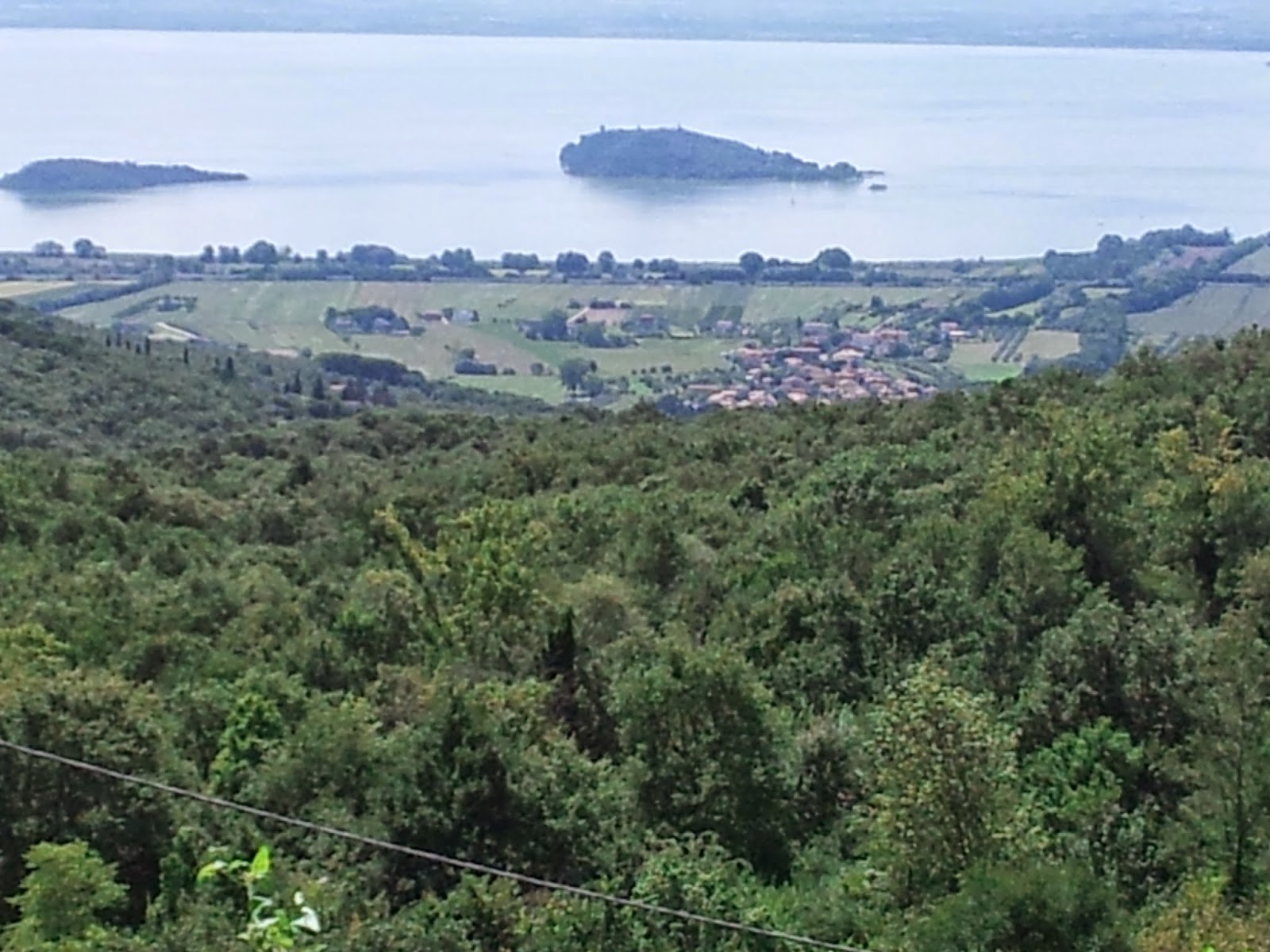 The trees are interesting. On the hills there are many deciduous trees, including oaks, that would be readily familiar to British audiences. Intermixed with these, however, there are exotic conifers that give a very characteristic view to the landscape, and which would make a model battlefield look very authentic. Some of these are shown below. A note of caution; some tree species such as the poplar have been developed since Roman times, but I believe the below would have been around back then. 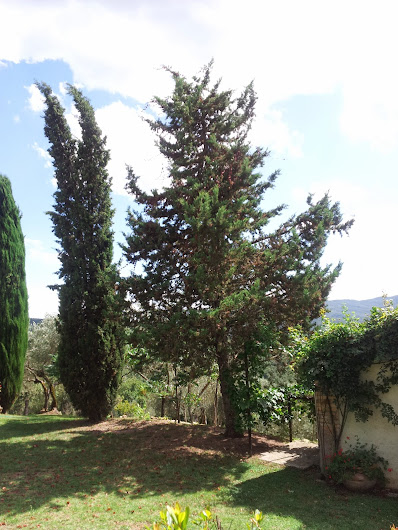 My favourite Italian tree-type is the pencil-thin Cypress (two shown, above left). One can't have too many of these; they look particularly fine along a ridge-line. The taller the better. The pine on the right was also rather common and suitable models are readily available from China, on eBay. 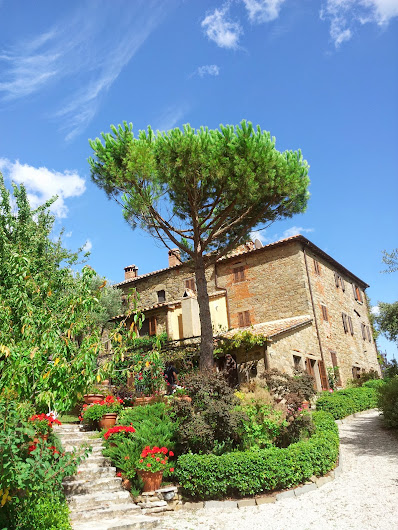 The Umbrella Pines (above) are majestic trees, with a most unusual appearance. I'm hoping to be able to convert some model trees to resemble these. 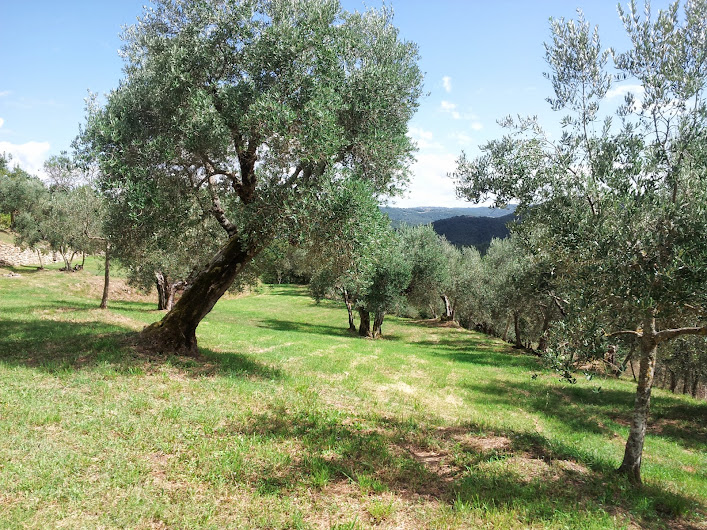 There are huge numbers of olive trees, often neatly laid out on a grid. The silvery green leaves are very hard to imitate, though. 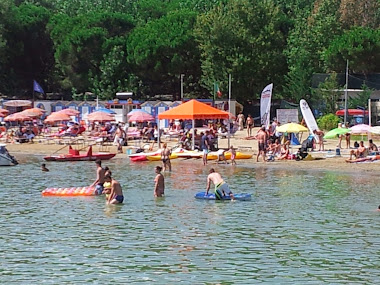 Here is the modern shoreline of Lake Trasimene. Modern Italians frolic in the sun where their ancestors fought and died; and who can blame them? It was a lovely day. 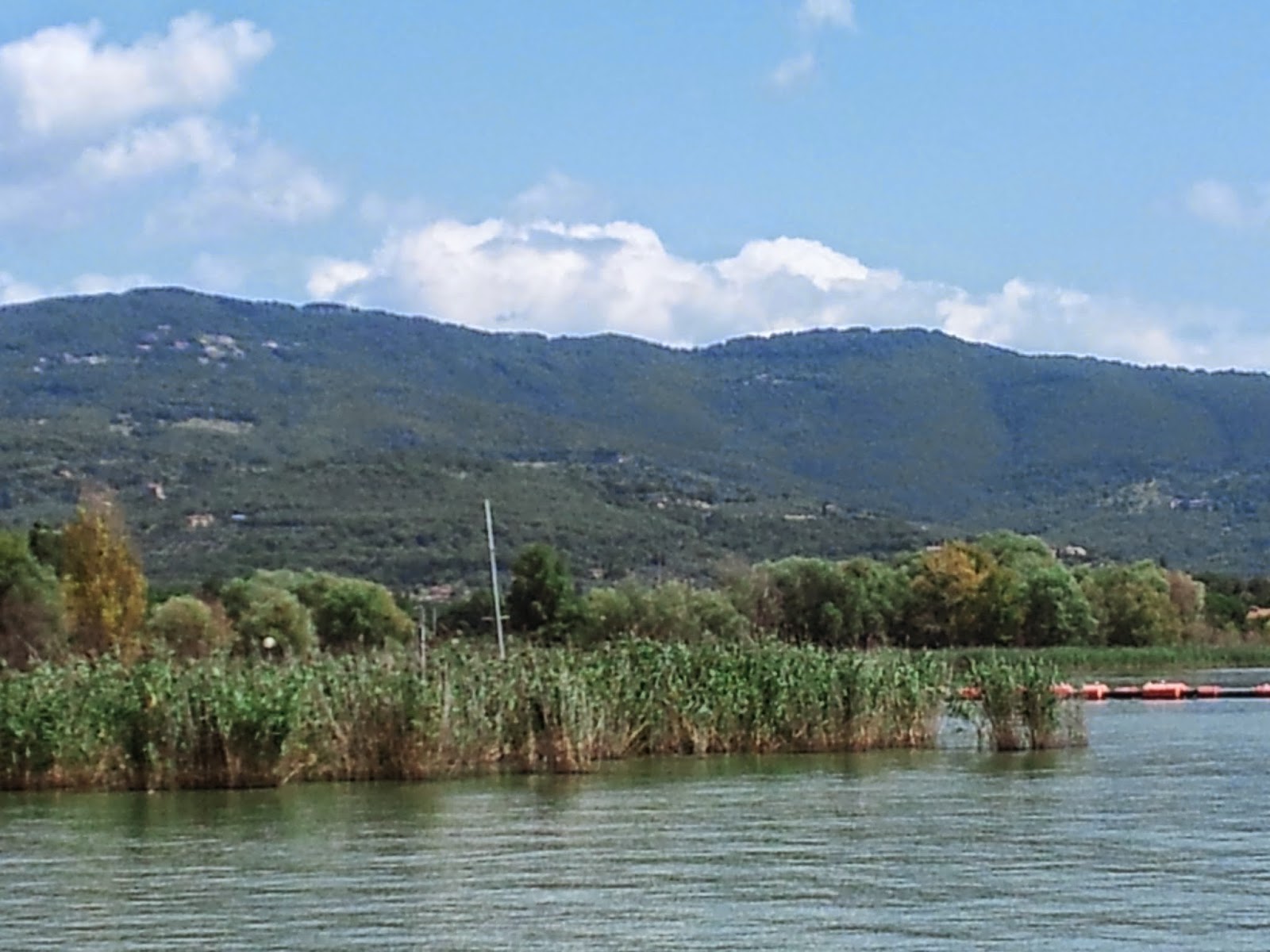 Finally above is a shot of the reed banks just along the shore of the lake. The reeds are perhaps 1.5m high. The shore to the right of the Roman column would have been very marshy. Some Romans waded out into the water, neck deep, in an attempt to escape, only to be hunted down by the Carthaginian cavalry.

Umbria is a beautiful region and I can heartily recommend it for a sunny rural holiday, with great food and historical cities.
Posted by BigRedBat at 11:53 No comments: 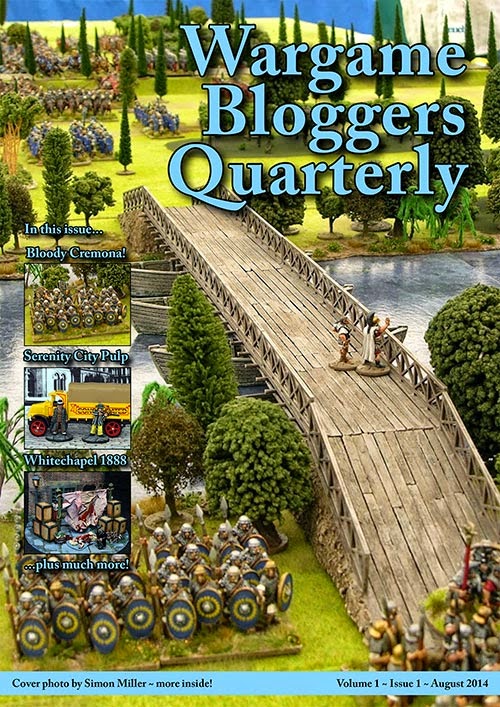 
The purpose of the WBQ is to help promote wargaming and miniature painting and ensure that the best material generated by participants in the hobby is available to the wider community in the long term.

Any individual is free to submit content to WBQ for publication. Submissions may not have been published in any other e-Zine, printed magazine or other publication to prevent copyright infringement (with the exception of the author's own personal blog). All content remains the copyright of the author at all times and will be fully credited upon publication.


If you want to know more about WBQ you can read our charter here or you can contact the current Editor-in-Chief via email on wargamebq@gmail.com.

Important: WBQ is specially designed for tablet and/or PC viewing and contains high-resolution images and other content that look great when zoomed in or viewed full page. Make sure you download your copy rather than view it online to get the very best experience!

Posted by BigRedBat at 00:01 No comments:

This is a (clickable) work in progress shot of the hastati and triarii of my allied legion. These lovely Aventine figures all date back to the 2010 Zama game, and, unusually, most were painted by me. I've retouched them, and replaced some of the shields. This legions is going to have a "horse" theme, with some careful use of LBMS transfers. Now they just need some matt varnish, and a little work on the bases.  Once that is done, the allies will be complete.
Posted by BigRedBat at 10:57 No comments:

Partizan in the Park Video

An excellent video of the games at the recent Partizan in the Park, from the chaps at Wargames Illustrated. It is very interesting to see closeups of the games I didn't have time to see properly on the day.  The standard of the games was exceptionally high!  I love the terrain on the fist game; I'm going to need a whole lot more terrain for my expanded Cremona.
Posted by BigRedBat at 10:20 No comments:

Today is the turn of the allies.  These two units are the Allied Principes, and I think they look even better than their Roman colleagues.  They are of course Aventines and came from the brush of 2 different (unknown) painters, one of whom is very good.  I did a little highlighting and shield work (LBMS shield transfers).  All photos are clickable!

The figures are very animated and look very heroic, with their plumes and feathers.  Below, I have a command stand for the legion, too.

Both of the legions are now nearly finished; I just need to "tart up" my own allied hastati, and base some miniatures that Shaun has painted for the Roman hastati.  I will need to paint some Roman horse, too, but there's no time for that just now!
Posted by BigRedBat at 15:22 No comments:

... and they are literally boards at this stage! 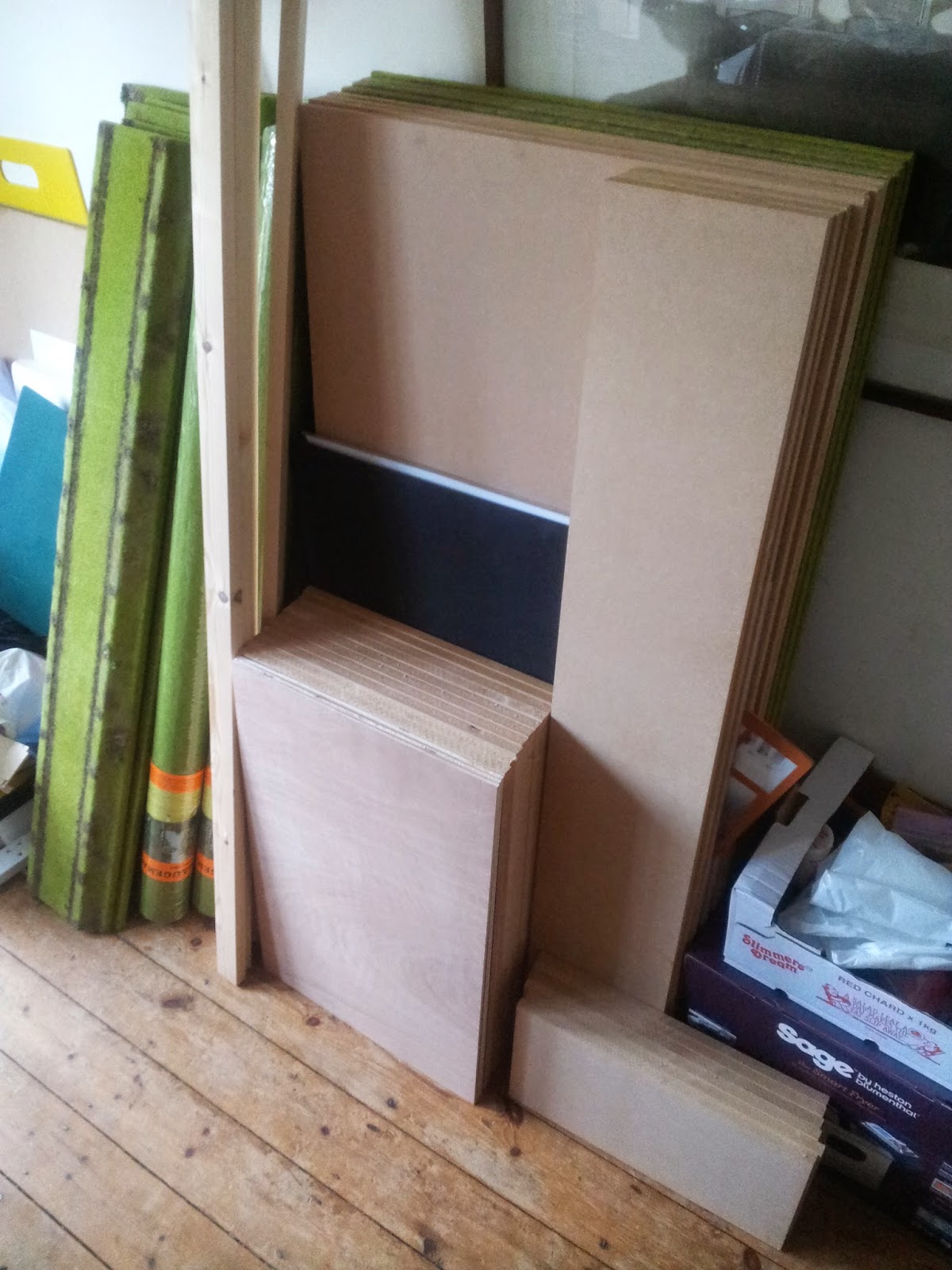 I've four big boards and 9 smaller boards to cover with static grass sheet, and then add patches of flock, selectively.  When finished, they will make an 18' by 5'4" table, which I'll use for various large games over the next year or so.
Posted by BigRedBat at 15:08 No comments: 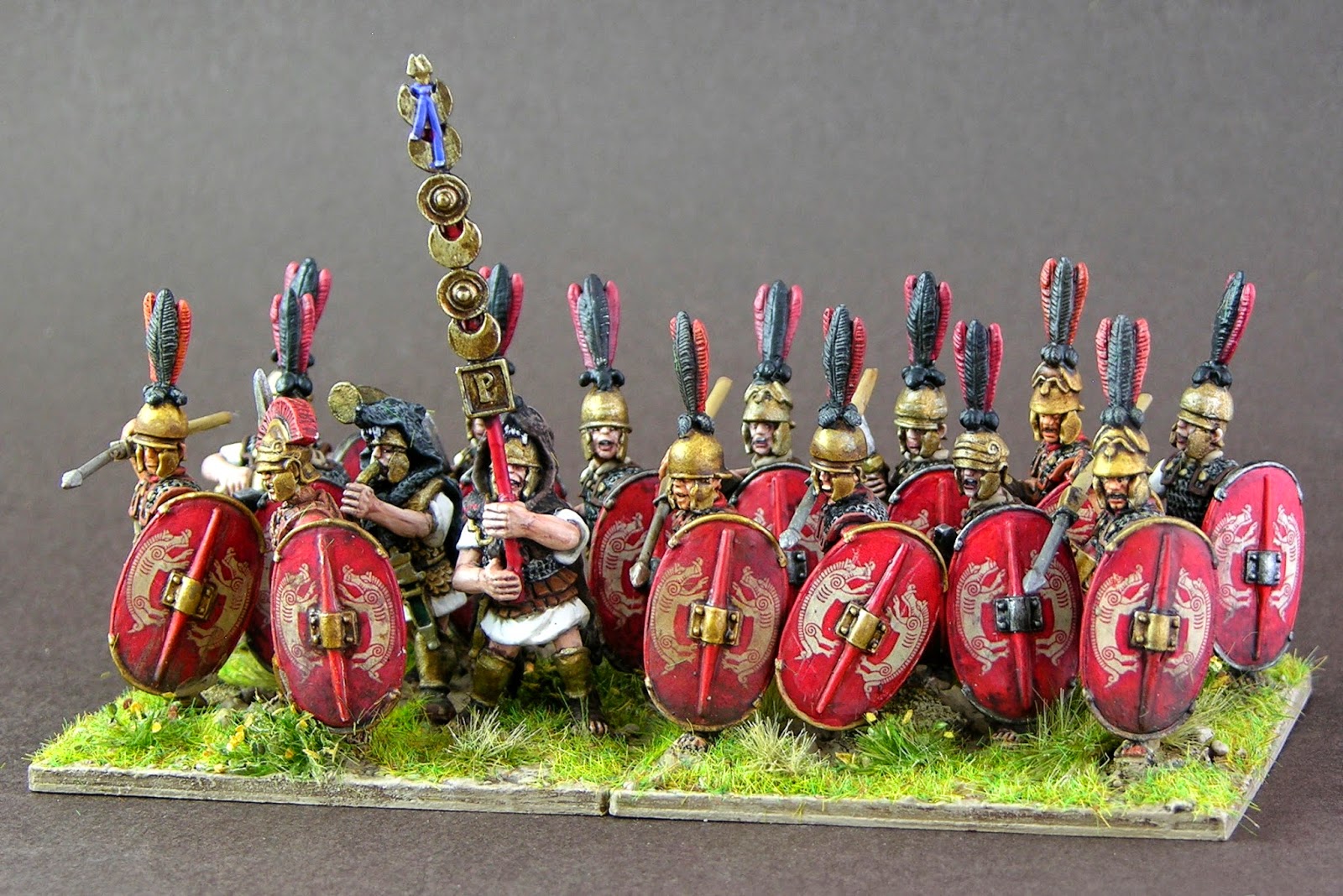 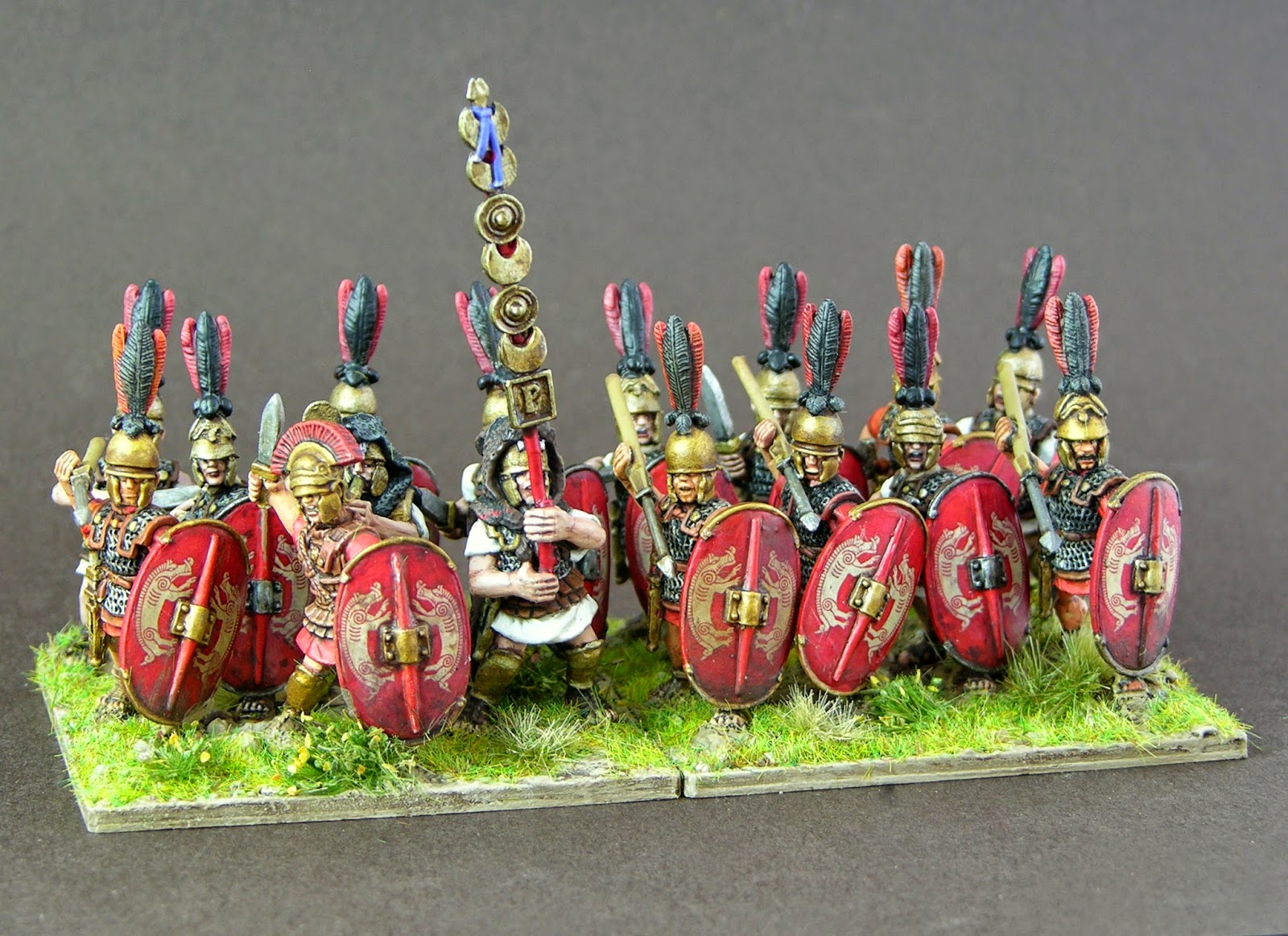 These lovely Aventine figures were painted by David Imrie and Shaun Watson (Redzed), and I'm very pleased to own them, as they are both far better painters than am I.  Luckily, they had both used the same shield design. 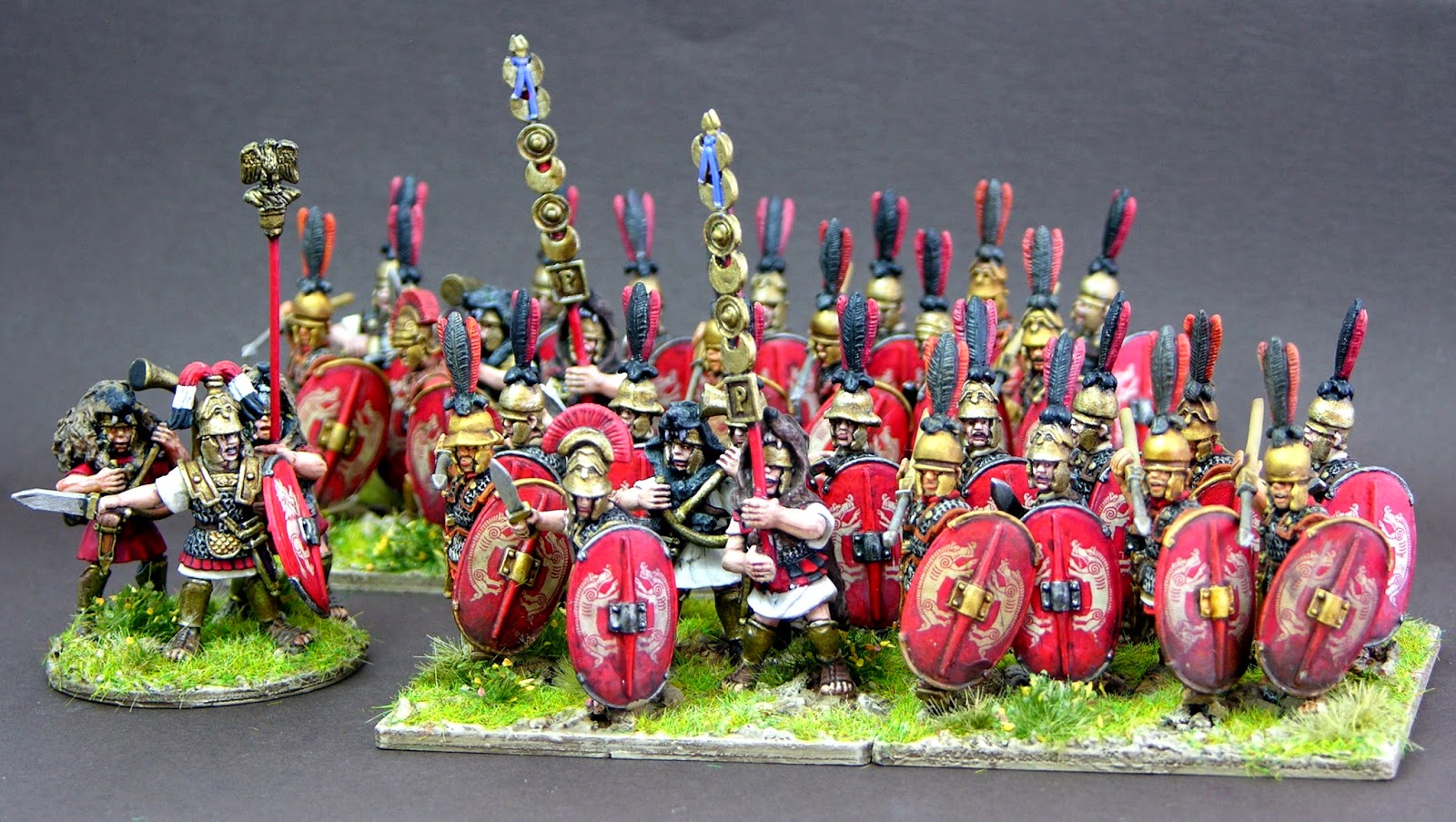 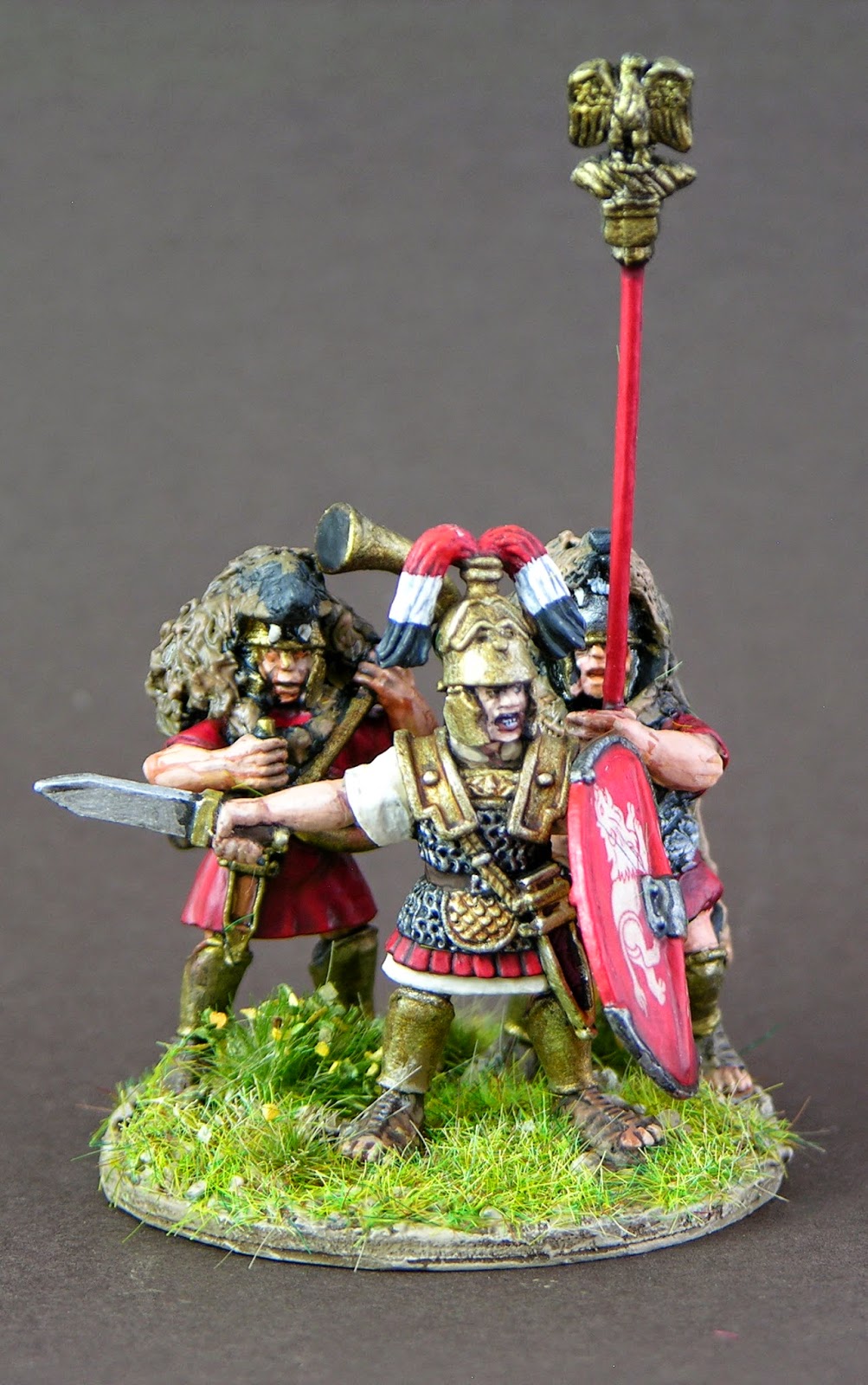 Finally, here is the command stand; I absolutely love the Centurion, and what Shaun did with the crest.  The two figures behind were painted by Nick Speller.

The new legions are coming on apace, and I may take them along to the Wargames Holiday Centre for the weekend there on 30/31st August.  They will certainly be at t'other Partizan on 7th September.

Next... the Allied Principes...

Posted by BigRedBat at 11:31 No comments: