I've just started to get my mind around the Asculum game that various chums and I propose to run next year (probably at Partizan, in May).

Asculum 279BC was a classic Successor vs. Roman battle, which conveniently includes lots of pikes, legionaries, elephants and anti-elephant secret weapons.  Plus it ties in nicely with the spiffing range of miniatures that Aventine are producing...  Rule set likely to be Hail Caesar.

Below are the very broad brushstrokes of the OOB, based on the Pen and Sword "Pyrrhus of Epirus" book, scaled to 1/100.


My first thoughts are that, as it stands, it is very do-able as we have enough Romans (although not the leves), from Zama, and enough pikemen.  We are probably only short of the Southern Italian and Samnite infantry, and cavalry.

My concern is that it doesn't give enough scope to use quite a lot of the figures that we already have painted; Craig and Aventine Keith, between them, already have a lot more pikes than we would need (let alone mine).

I'm somewhat tempted to up the ante by doubling up to 1:50 scale (keeping the number of nellies and carts fixed), even if it means that we have to use Carthaginians, perhaps, to represent some of the allies.  I'll have to see how it goes; whether I can, perhaps, produce a Roman legion, or two, m'self...
Posted by BigRedBat at 19:15 7 comments:

Email ThisBlogThis!Share to TwitterShare to FacebookShare to Pinterest
Labels: Asculum 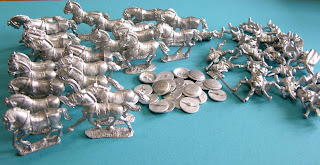 The above are (mostly) Aventine Miniatures Tarentine cavalry, which are the first miniatures I'm painting specifically for next year's planned Asculum game.  I've wanted some units of Tarentines for years, they are so useful for many Successor-era battles.  Back in the days of WRG I used to use 3 small units of 4 Tarentines to pin the enemy so my Polybian legions could get stuck in; they won load of games for me, and have been a favourite troop type ever since!

I've mixed in 8 Foundry horses, and 6 Foundry Greek riders, just because I have them.  The riders blend in perfectly; the Foundry horses are a tad larger, but go pretty well, too.  Plan is to do 3 units of 8 light cavalry, and then see what Keith and Adam come up with for the heavies.  The Aventine minis are lovely sculpts, with vrtually no mould lines.
Posted by BigRedBat at 15:39 4 comments:

I've finished basing the two auxiliary Cohorts from yesterday.  Unfortunately I've misplaced my copy of the SOA publication about the Year of the Four Emperors, which is a pain as I have been naming all my units, from that august work.  When I find this, they will likely become some  flavour of German or Belgian auxilia.

Both cohorts are BTDs, painted by Dr. Simon's mate, who did great work.  I highlighted extensively, overpainted the shields around the nicely hand-painted designs, and washed with ink in a matt acrylic varnish.  Basing for the two units took around 3 evenings.  All pics are clickable. 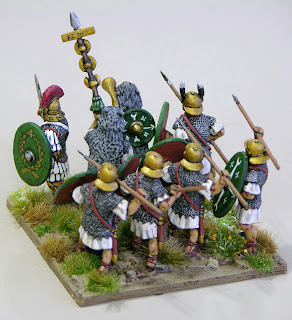 Above, you can just make out the space where the unit's name will eventually go, at the rear of the command stand.

This brings me to 9 finished auxiliary cohorts, with 2 more with the painter, and one remaining here to be painted.  Once all 12 are finished I'll focus on the auxiliary cavalry; I need lots of those, too!
Posted by BigRedBat at 19:47 5 comments:

I'm finishing off some Romans that Dr Simon's mate painted for me... 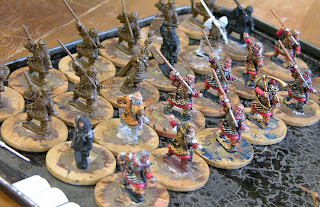 ...and getting ready to paint the next lot of Romans.

This is pretty much standard in the BigRedBatCave.  Most days I'm busy finishing off someone else's Romans!  Even after these I must have 3 or 4 hundred to do.  Daunting...
Posted by BigRedBat at 20:01 9 comments: 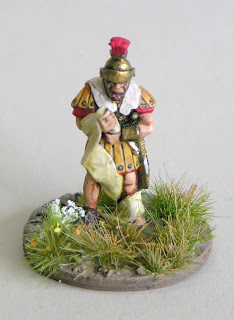 Muswell Militia have recently started to play Hail Caesar and Black Powder.  One problem with these rules is that it is possible to miss multiple turns, by repeatedly failing one's command roll.  After George missed 3 turns in a row during a game of Black Powder, I came up with the idea of giving generals who fail their first activatation of a turn a marker, entitling them to a +1 on the following turn's dice roll, which should reduce the chance of multiple failures.  I call this "George's Rule".

This is the Confused General from the cover of the DBA rulebook, who I've re-based for use in this capacity.  He's scanning his scroll of Hail Caesar, trying to find a missing rule point, lost amongst all the pretty pictures and military anecdotes.  ;-)
Posted by BigRedBat at 21:20 7 comments:

I swappped some stuff with Einar-Olafson Painting's Andres around the same time as he painted yesterday's Command figures, and the figures he gave me included around 20 Copplestone Caesarians, around half of which were completely finished, and the balance at least 60% there.  He has mentioned that he painted these some years ago, but the standard of painting is excellent (far better than I am capable of), particularly the shields.

I've done my best to finish the unit in a similar style.  I painted a standard bearer, completed the unfinished minis (saving a few of Andres' unarmoured legionaries for a later unit), and based.  Luckily there were just enough hand painted shields for the unit.  Click to see the details. One small departure on basing; 20mm depth just isn't enough to do justice for these Copplestone  figures, so they are now the only unit in all my armies on 25mm depth bases.  They won't be the last, I'll do this for the whole  of the next legion (my third Caesarian). 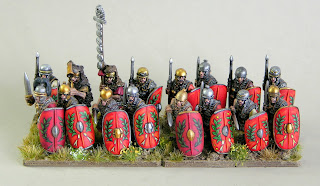 I really  like the subtle variations in the shield designs (above).   Most of my Caesarians have plain shields, and I think of the figures with ornate shields, such as these, as being in the Praetorian bodyguards of leaders such as Octavian and Mark Antony.

These are by some measure my best-painted legionaries!
Posted by BigRedBat at 19:14 14 comments:

These figures were painted for me by the highly talented Andres of EinarOlafson Painting, and constitute the command stand for my third Caesarian legion.   I based.  I think they are probably the best painted stand in my collection, do have a click... 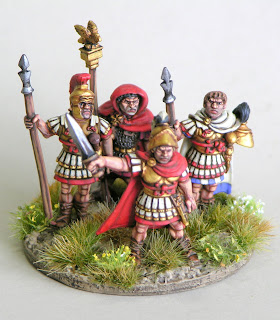 They represent a Legate, Aquilifer and a couple of Tribunes.  My photo isn't the best... but you can see he did a fantastic job; just look at the faces! 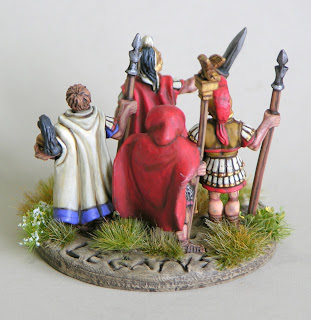 Do drop Andres a line via the above link, if you need something very special painted!
Posted by BigRedBat at 16:28 11 comments:

This week Muswell Militia re fought the Battle of Megalopolis 331 BC, using the Hail Caesar rules.
I picked this battle because it gave me an opportunity to field both my Spartan and Macedonian armies for the first time.  I loosely based the OOB on Jeff Jonas' excellent Ancient Battles site.  With 4 players, I volunteered to umpire.
George as Agis, and Dr. Simon, commanded the Spartans, defending a pass near Megalopolis (below).  Their army consisted of hoplites, supported by light troops and a unit of heavy cavalry.  All pictures are clickable.

Grant and Ian player Antipater, Alexander's regent.  Their army (below) consisted largely of pikemen, supported by an allied phalanx of hoplites of rather doubtful enthusiasm, light troops and a unit of heavy cavalry (that in the event played little part in the game). Antipater was under time pressure as the superior Macedonian army needed to capture the ridge, by nightfall (turn 6 or a little after)

The Spartans, below, moved swiftly to occupy the crest of the ridge. 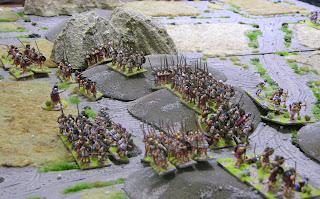 The Macedonian infantry advanced, in echelon (below), to meet them.  The phalanx in purple on the extreme right was elite, and was led from the front rank by the aged Antipater.  The Macedonian left (of less reliable allies) was refused.  Is that the hand of Zeus? 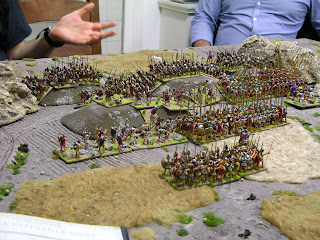 The battle for the ridge was hard-fought.  In the first round (below) the uphill Spartans seemed to have the better of it, but in the second the weight of the deeper (and slightly better supported) pike phalanx, with the inspirational Antipater fighting bravely from the front rank, told, and the Spartan formation disintegrated. 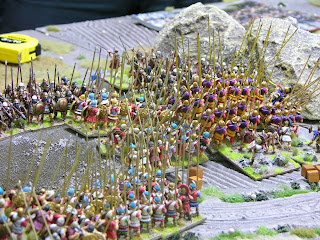 The Macedonian elite pikes turned and started to roll up the Spartan line.  There was considerable confusion with the rules at this point, which didn't seem clear as to whether the Macedonians could turn through the 90 degrees required to the flank of the next phalanx. 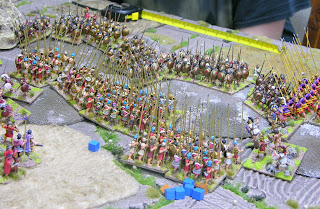 With the battle turning against them, the Spartans advanced their cavalry (below), who were charged by the Macedonian's hoplites.  This was a learning point for us, as it transpired firstly that the infantry became disordered by the counter-charging cavalry, and also that I'd given the scruffy Spartan cavalry the same stats as Companions (well hard!).  It was Chaeronea all over again as the hoplites were forced back, shaken. 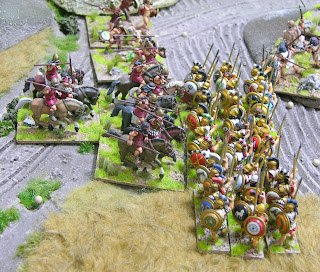 At this point it was getting late, and we called the game.  The Macedonians had taken part of the ridge, and looked ready to turn up the Spartan line, but the latter's late cavalry charge had to some extent restored the balance.  Perhaps a narrow Macedonian victory.
The game was very enjoyable.  The Hail Caesar rules do give a very good game, but we are still experiencing some frustration with the way that the rules are laid out, which makes it hard to look up points quickly, in the heat of battle.  We are gradually mastering them, though, and expect to play our third game next week.
Posted by BigRedBat at 22:36 12 comments: