Here are some absolutely cracking images of the final outing of the Battle of Mancetter at SELWG, last Sunday- also the final event of my wargaming year, before my annual hibernation. All the pictures were taken by Ian Notter, and they came out brilliantly! They will expand, if clicked. 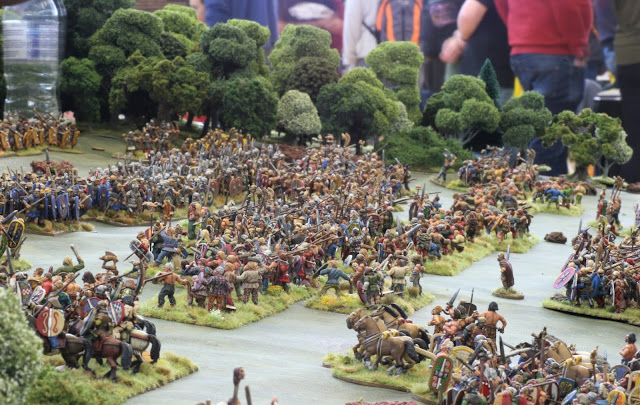 Above, waves of Britons crashing against the Roman lines. The Roman auxiliaries are in front, and the legionaries in reserve, as at Mons Graupius. 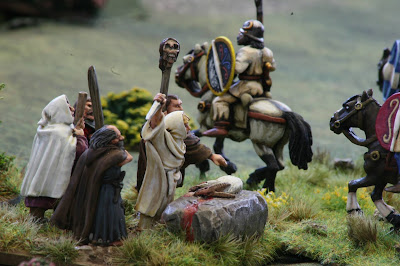 The omens are good! Lamb cutlets for supper. 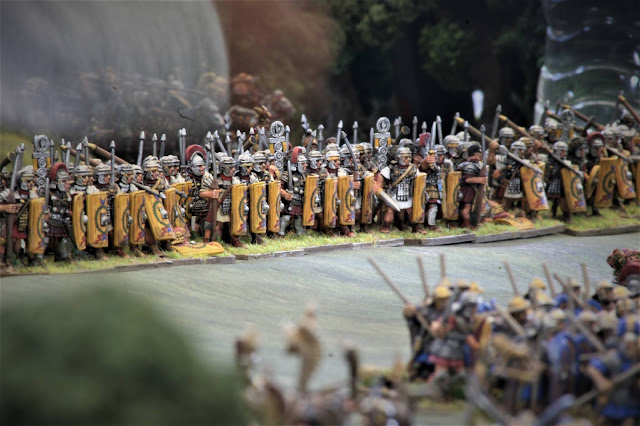 I absolutely love the way that the above shot came out; even with the ghostly hand! Those are Wargames Foundry "Saleh" sculpted legionaries, my favourite Early Imperials. I've not come across anyone else with a collection of them. 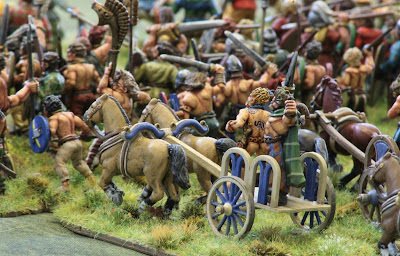 Above, one of the eighteen British chariots. 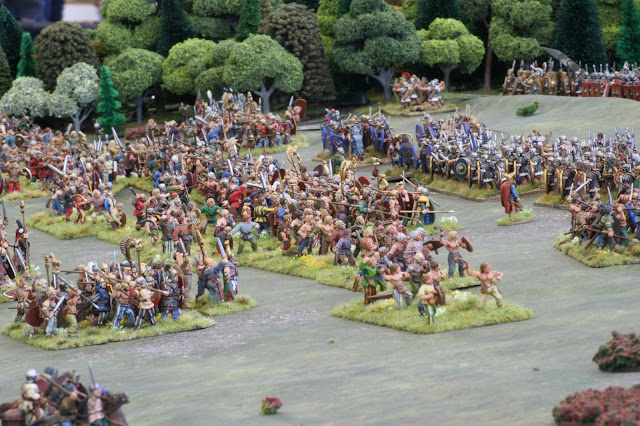 Finally, another shot of the British advance. Most of the Celts were painted by Shaun McTague with a little finishing by me- others are by Nick Speller and Shaun Watson, and others, still, random purchases from eBay. The trees are from Debris of War.

We had a super day at SELWG. My To the Strongest! rules worked very well, delivering two results in just over two hours a game. The Romans won one game, and the Britons, the other, leaving the natives ahead by five games to three on the 2019 series. Romanes eunt domus! This is a most surprising outcome, what with the Romans being both better armoured and uphill; I put it down to the staying-power of the deep units, and some plucky British players.

A huge thank-you to Ian Notter, Ian Cameron-Mowat, Mike Lewis and family, Nick Speller and John Carpenter who helped set up or knock down, or both. Also my thanks to everyone who played!
Posted by BigRedBat at 12:00 15 comments: 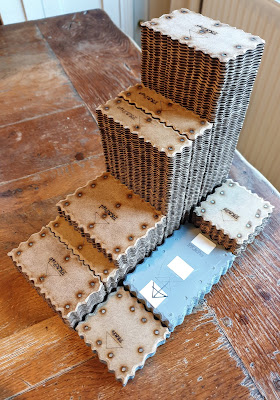 These are the additional bases required for my Salute game (luckily, my Numidians are already based). There are (I think) 124 of them, each of which needed the edges to be chamfered and fitted with 6-12 magnets.  They took me something like 5 weeks of evenings to do, I went through around 60 Xacto blades and a couple of fingers.

The bases at the back are from my FK&P14 range- two of them fit in a 20cm square. The bases at the front are from various other ranges and three fit in a 20cm square. Laid edge to edge, there are 10 metres worth of bases here; the reason for having so many is that both armies will be formed up four units deep across the whole width of the battlefield.

Now I just need to fill them with minis!
Posted by BigRedBat at 17:45 10 comments: