I had a fine weekend travelling to Newark for my favourite wargames show, Partizan. My extended Raphia  had its first public outing. 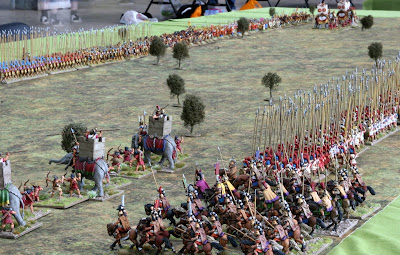 Above, the view from behind the Ptolemaic left; those are the (supposedly) inferior African elephants. In the photo below are the more numerous and heftier Seleucid pachyderms.

The cloths we used are the new Sagebrush Steppe mats from Deep Cut Studios. I was really pleased with these as I had them designed to match my bases.  Note that they have a good deal of green in them, as well as the dusty beiges and ochres; indeed very much more green than the Deep Cut thumbnail would suggest... 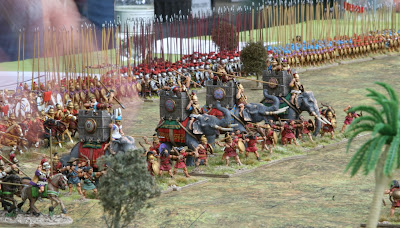 The game was particularly exciting. Usually the Seleucid Indian elephants sweep all before them, but yesterday the Ptolemaic African beasts overthrew them. To add insult to injury, the inferior and outnumbered Ptolemaic cavalry managed to seriously wound Antiochus the Great (next to the man on the white horse, below), who retired from the field. 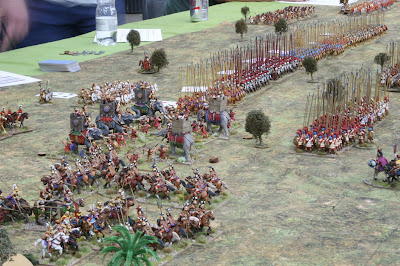 In the centre (below) both phalanx hit each other and became locked in a shoving match in which honours were broadly even. 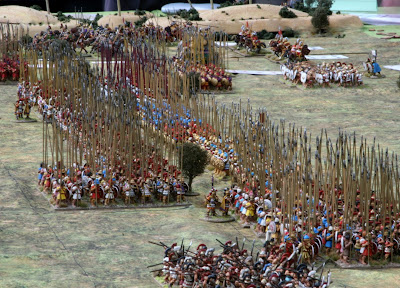 On the other wing, though, the Seleucids gained the upper hand and routed the Ptolemaic cavalry. They then turned onto the flank of the Galatians (below) and were well positioned to roll up the Ptolemaic line; it was looking sticky.

Just at this point a wonderful wargaming event occurred.  A 13-year-old named Matthew was commanding the Ptolemaic centre- he'd had a fairly uneventful battle, so far, but had picked up the basics of the rules. He noticed that a couple of units on the Seleucid left had failed to advance, leaving the left hand side of their phalanx temporarily unsupported; it was "hanging in the air". Matthew saw an opportunity to turn his rightmost phalanx unit onto the Seleucid flank. This might have gone very badly for him (I told him it was very risky), as it exposed this unit's own flank, but luckily the opposing Seleucid general was temporarily distracted and the young Alexander proceeded to slaughter not one but two phalanx with flank attacks, winning the game for Ptolemy! I should imagine he won't forget that in a while.  :-)

Many thanks to all who played and all who helped, especially Ian Notter (who took the photos), Andrew Brentnall and Dave Lycett who helped hugely with packing. Another fantastic show organised by Tricks, Laurence and the Newark Irregulars! Oh and we won the raffle, too.  ;-)
Posted by BigRedBat at 00:01 No comments:

Here's another project I have been working on this summer for a gig at the Wargames Holiday Centre in late September. Each unit consists of nine or ten Numidian light cavalry mounted on two of my 20cm grid bat bases that lock together. The riders are depicted circling to throw javelins, and include some Roman casualties. All are metal miniatures, mostly Foundry, A&A, Companion and conversions. 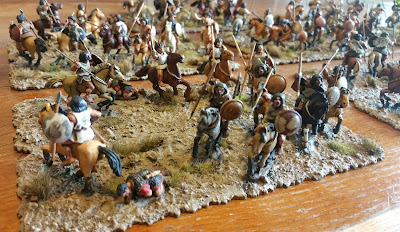 I have more or less finished basing seven-and-a-half units (below) out of a required ten. A lot of the minis are from my collection, retouched and re-based, but others have been freshly painted by mate Shaun McTague. 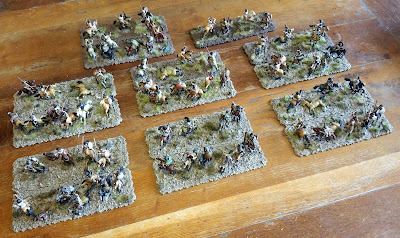 I am also in the process of basing eleven units each of 18 light infantry. When fully mustered this army will include 100 light cavalry without bridles, 200 light infantry, 100 formed infantry, 6 elephants and some bodyguard cavalry. Enough to fill 10 Really Useful Boxes...

We still have a couple of spaces for the gaming weekend which will be held in Basingstoke over the weekend 22nd to 24th September- if you fancy coming along, please email me at the address on my blog and I'll mail you details.
Posted by BigRedBat at 18:37 No comments:

Email ThisBlogThis!Share to TwitterShare to FacebookShare to Pinterest
Labels: Numidians 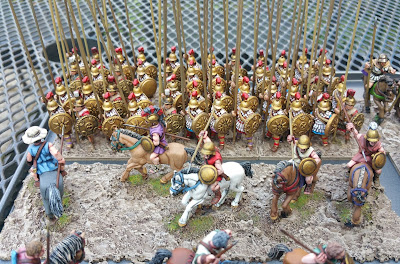 Above are my first Tarentines and the twentieth phalanx from my last post, now grouted but as yet un-flocked. Below is Alexander's second squadron of Companions; presumably led by Hephaestion. I have a slow burn project to depict Alexander's army of the Persian campaign. These were painted by Nick Speller with some highlighting by me. 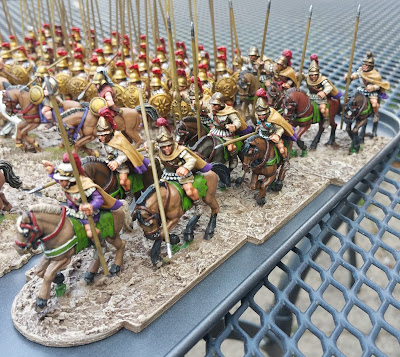 Lastly below are my first unit of Thracians from a purchase on eBay or LAF. Lovely work by the original painter. Most of these are intended for the large Raphia game on Sunday at Partizan in Newark- if you are coming please do say hello, or stay and turn a few cards!
Posted by BigRedBat at 17:46 No comments:

Email ThisBlogThis!Share to TwitterShare to FacebookShare to Pinterest
Labels: Partizan 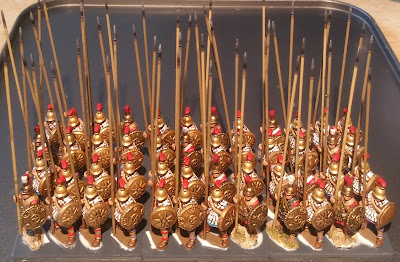 I'm sure that this isn't my last ever phalanx, but it is almost certainly the last one I'll base this year. This is my twentieth phalanx block; a suitably round number to pause on. Most of the minis were painted by Shaun McTague, with some detailing added by me. They are a mix of Foundry and Polemarch phalangites and all have Sidon helmets, my favourite style of ancient head-ware; they join my Ptolemaic phalanx.

When deployed four ranks deep the entire phalanx will cover a frontage of four metres. Later I hope to add an Alexandrian phalanx and an Antigonid Macedonian phalanx, and perhaps a couple of units of Spartan phalangites. I would love (one day) to accumulate 32 units so that I could depict a 1:1 taxeis of 1500 minis, drawn up 16 ranks deep. Muwhhahaha....

When the basing is finished this unit will join the throng for my big Raphia "to the Strongest!" game at t'other Partizan on Sunday week, 21st August. If you'd like to play in the game (and haven't already) please drop me a line and the address on the front of the blog. I hope to run it twice and, with around 2K minis, there will be room for plenty of generals!
Posted by BigRedBat at 19:28 No comments: