A very rough WIP shot of the first ancients minis that have actually made it onto the painting tray in 6 months!

I'm planning to depict a crowd of lightly armed civilians with a few vigiles and urbana mixed in, either as rioters or perhaps the Vitellian defenders of Rome in 67AD.  Strictly street fighters.  I'm currently thinking about how to base them, if anyone has any ideas for base dressing etc., please bung them my way!

28 of these were painted very nicely by mon ami Greg who very kindly gave them to me at Salute.  The ugly woman front right and a few other dodgy minis are spares from the painting box, anything good is from Greg.  Some of the minis are Foundry, others Aventine, some god knows!  I'm doing just a little highlighting and detailing, maybe some tunic stripes and suchforth.
Posted by BigRedBat at 20:58 12 comments:

Back to the Rubble

I helped out a (very little) bit with a game run by Greg Privat and Andrew Taylor, at Salute, yesterday, set in the rubble of Pavis, the great ruined city in the plains of Prax.  That's the Pavis wall in the background, and the Zola Fel river on the right. 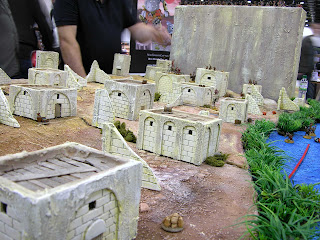 Below, some trollkin are fighting a Lunar on the roof of this ruined building. 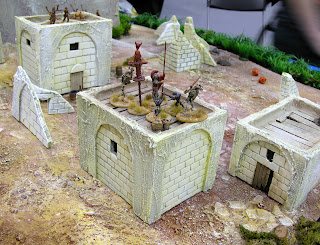 A whole tribe of Uz can be seen below. 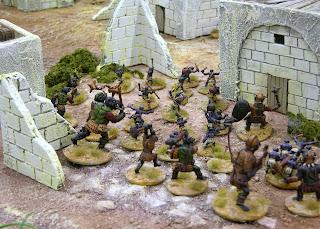 Greg produced the terrain and painted most of the miniatures, other miniatures (some of the Lunars) were provided by Andrew Taylor of Mad Knight Castings.   I was very impressed with some of the new miniatures, which have slipped under my radar until now. and there are some humorous pieces such as the trollkin (note what appears to be a suicide battering ram, below), and an elephant-headed broo. 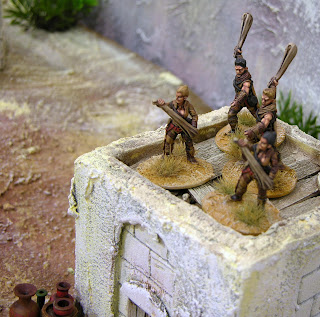 The Lunars, in particular, are rather fine.  Above are some Thunder Delta Slingers, and, below, an assassin and various Lunar soldiery assault an altar. 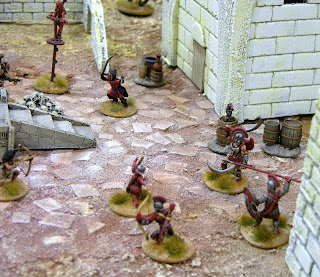 I was very impressed with Andrew's new range; great to see Gloranthan gaming underway again!  I will paint some Gloranthan toys before the year is out.  It was great, as ever, to meet Greg and his new and even-taller wargaming buddy Jean, and Andrew of Mad Knight, plus various old chums like James Ewins,  Nick Speller, Simon MacDowell, Dug, the chaps from Frothers etc (sorry if I have missed you!).  In the general confusion of the day I missed meeting Iron Mitten, the Dark Knights and Bloody Dawns crowd and Saxon Dog (where were those games?).
Posted by BigRedBat at 19:03 8 comments:

I've recently picked up some excellent buildings from Touching History's Paul Darnell, which will sit in a Roman camp I intend to build a little later on (perhaps in the summer).

The buildings are simple but very effectively made from foam-board and Will's tiling (and some plastic doors); nice and light, and well detailed.  I may need some more at some stage... I gather Paul is making an entire fortress for Dug, which I very much look forward to seeing!
Posted by BigRedBat at 17:25 14 comments:

So where has BigRedBat been? 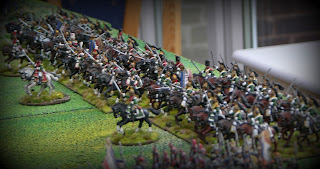 I’ve been posting rather rarely on the BigRedBatCave, and much less evident on the wargaming boards, and I thought I might post a brief explanation of why and where my thought processes are going, and get it straight, in my own mind about what I’m going to be doing next.
Firstly, I’ve been unusually busy at work for the last six months, and there has been a good deal of pressure, too.  Working longer days and not knowing with any sense of reliability that I’ll be able to leave at 5:30 has put paid to my usual evening gaming sessions. I’m also too tired to face setting up/knocking down a game as I used to. This has meant that I’ve not run an evening gaming session since last October, the longest period I’ve gone without a wargame (of some description) in around 30 years.
Secondly, I found myself becoming frustrated with TMP, where I was hitherto very active.  I felt I spent too long reading the posts, and also became increasingly frustrated by the cross-posting and occasional trolls.   The last straw for me was Allen Curtis being banned, as I often enjoyed his posts and he had more historical knowledge than the rest of us added together.  So I’ve gone cold-turkey, let my subscription lapse and not posted there since November (although I do still, sometimes, skim the ancients boards).  I miss my friends from there, but, on balance, I feel it was a good call.
Thirdly, I cut back on big projects, abandoning a large game that mon ami Greg and I had planned for Salute, and a Zama-sized game for Partizan.  I just haven’t had the time to do them justice.
Finally, I recently stopped cruising eBay.  I’ve spent far too much on minis and have a huge backlog of units to complete and base up, both Ancients and my new Napoleonics.  The numerous boxes of painted but un-based miniatures are even more depressing than the even more numerous boxes of unpainted minis.  I have spent far too much over the last few years and it really is time to cut back, and even sell off some army surplus, although I am still getting some minis painted for me.
So what have I been up to, instead?
Well, I’ve still managed to do a lot of painting/basing, which I can fit in late in the evenings and which I find relaxing.  Over the last 6 months I have got almost 500 Napoleonics ready for the table,  and also have perhaps 400 more from my former eBay purchases in some stage of readiness.  I also have a good number of Romans (mostly Caesarian and Early Imperial) that I really need to base, soon, along with a fort to house my legions.  In the short term I haveve decided to power ahead to finish a couple more brigades of French, whilst I have the bit between my teeth, before hitting the Romans again, after the summer.
Gaming is a tricky one.  In all honesty I still haven’t got the energy, at the moment, for a regular weekly session, but I do need to work out a way of fitting in some play, even if only once a month or so.  I also want to get around to a lot of shows this year, and also play some games at weekends if I can manage it.  I did manage to play yesterday wtih RTB and friends, near Nottingham; more about this, later, on my very own Spanish ulcer...  I must say I did have a great time and came away with some excellent ideas for modelling projects...  there’s a snap of my dragoon division, above, charging onto the table for the very first time.
Cheers, Simon
Posted by BigRedBat at 17:43 14 comments: