These will be the "tanks" of my Ptolemaic army,  Unfortunately, as they are relatively small and skittish African Forest elephants, they are fated to be M13/40's to the Seleucid's Matildas.

These are Africans from the excellent Aventine range.  I'm falling behind in my painting plan, so will need to work out a way of painting these VERY quickly... luckily they are relatively simple models.
Posted by BigRedBat at 12:42 No comments: 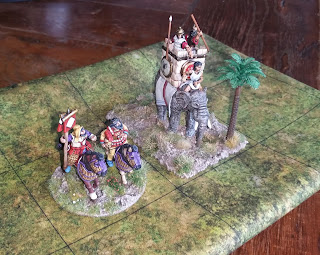 Email ThisBlogThis!Share to TwitterShare to FacebookShare to Pinterest
Labels: Deep-Cut

I've recruited 5 African elephants from Aventine into my Ptolemaic army, to represent the nellies at Raphia. 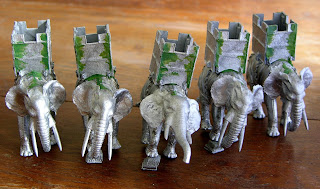 These are lovely models, with 2 head variants, and two bodies.  The howdahs look particularly convincing, and depict rawhide stretched over a wooden frame.  My only slight reservation about them, is that they feel just a bit on the large side for how I picture an African Forest Elephant.  Still, though, they are noticeably smaller than the Indians Craig will bring.  Some are temporarily propped on Irregular Miniatures 2mm Pike phalanx.

There was next to no flash or vents, and it took me four sessions to assemble them.

Here's one from behind.  The tail is a separate piece, and plugs up into the elephant's posterior.  This assembly process very much reminded me of an episode of "EuroTrash", I saw years ago, which featured a "Pony Club"....   The most challenging element of assembly was fitting the small bell under each elephant's neck.  I'll paint the pachyderms, and I'm hoping that Nick will paint the 15 crew.
Posted by BigRedBat at 12:11 9 comments: 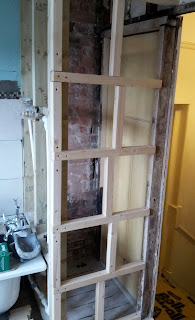 Our bathroom still looks like Stalingrad, on a bad day.  However, out of the ashes, like a phoenix, is rising the carcass of a new wargaming storage cupboard.  This will be plastered, painted, shelved and illuminated.  It's about 8' tall, by 26" square.

This will hold my gaming boards (including a new, deeper size intended to permit cavalry and tank maneuvers) and will take the surplus boxes of minis that no longer fit inside my War Cabinet.  I reckon there will be room for a couple thousand more minis, which should keep me out of trouble with Mrs Bat, for 3 years, or so... after that, god knows what I'll do.
Posted by BigRedBat at 21:14 6 comments: 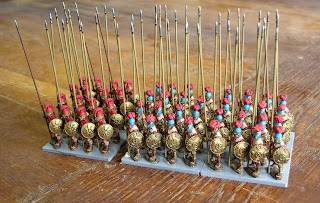 A titanic effort this weekend, has seen the Agemata Basilikoi (Royal vanguard) completed and stuck to their bases, ready for gunking.  They will be brigaded with the Peltastoi (in red, on the left), to form a single unit, on the left of the Ptolemaic phalanx.  Figures are mostly Foundry, but there are a dozen converted Polemarchs amongst the Agemata.

I can happily report that I now have more than half of the phalanx units painted and on bases  (1.2m out of the required 2.2m); it's all downhill from here!
Posted by BigRedBat at 11:56 13 comments: 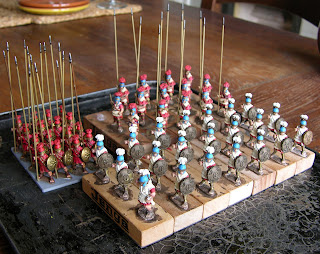 I've been plugging away with the Agemata; the whole unit is now on the painting table.  These Foundry minis are such a delight to paint, and are coming on very quickly!  The current batch (front) need another 3 or 4 sessions, so I should be able to start basing in around a week's time.  I really want to paint their plumes red, right now, but am saving them to last because there is a danger that the red will come off in handling, leaving white windows.

I've also been working on the rules and Raphia army lists in the background...

On the domestic front we have been getting our bathroom rebuilt.  Unfortunately this has revealed problems with our old house, and the entire interior wall of the room has been demolished (below), so we now have a unique and interesting open-plan bathroom.  The disruption means no gaming for a week or so.  A plus, though, is that I will have additional wargaming storage built in when it is all put back together, and there should be space for some 5' terrain boards, which I've long coveted. 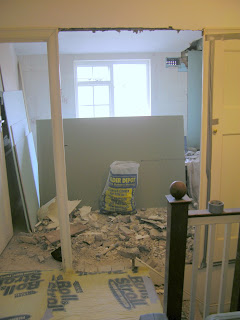 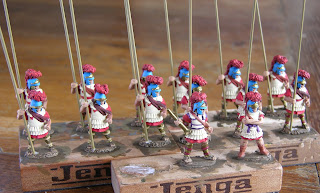 ... a quick WIP shot of the Polemarch Agema, that I converted earlier, by adding huge crests.  They now waiting for inking, Klear, matt varnish and highlights on the metallics.  And for me to paint another 21 mates, to join them...
Posted by BigRedBat at 14:28 5 comments: 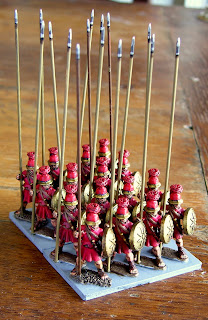 I finished painting the above peltastoi.  They are now in a holding pattern, waiting for their agemata colleagues, with whom they will be brigaded, to be painted.
Posted by BigRedBat at 15:26 16 comments:

A brief footnote to yesterday's post; the weather is finally good enough, for priming!  Here are the agema, showing how well the Polemarchs, with their enlarged crests (left) match the equivalent Foundry figures (right, with shields). 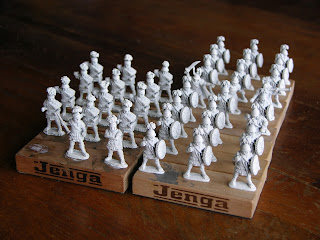 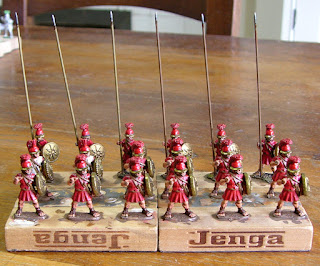 Above, I've mostly the figures that will be the peltasts for my guard phalanx, and below are some Polemarch figures who I've lightly converted, and who will join some similar-looking Foundry Successors to form the agemata.  Chap on the front right, is a Foundry Perseus; note the winged sandals! 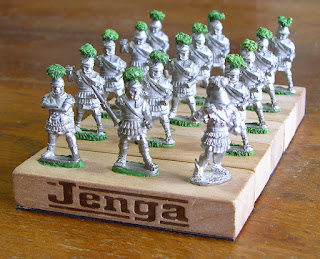 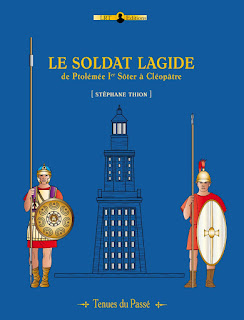 I received this book by Stephane Thion, on the various Egyptian Macedonian armies, in the post at the weekend.  Stephane is a French author and gamer, with whom I've occasionally corresponded; he seems like a very nice chap.  The book has 64 pages and is and packed with simple but beautiful colour reconstructions of Ptolemaic uniforms, from the founding of the kingdom to the arrival of Caesar.  Many of these illustrations are taken from grave stelae (handily naming the deceased under each drawing), and others are hypothetical.  I found the colours very useful, in particular there's one chart showing the colours from the grave stelae, all together.

Everything is there, from the agema, through the phalanx, to the exotic Galatians and Sudanese.  There are even some cavalrymen with horses and riders fully covered in textile armour... which I recall described in an old Slingshot.

There is a good deal of text, in French.  My reading French is poor and it will take me quite a while to work through this, but I'd recommend the book on the strength of the colour illustrations, alone. They are beautiful, and so very useful to a gamer/painter.  I bought my copy on Amazon.
Posted by BigRedBat at 21:12 6 comments: