The second "To the Strongest" World championship

The second-ever To the Strongest! World tournament will be held on February 13th in the village hall of the village of Chalgrove in southern Oxfordshire. People will be travelling there from as far away as the depths of Wales!

Choose your army from any of the To the Strongest! army list booklets, up to 120 points. If your favourite historical army list isn't already written, drop me a line and I will write a list for it. We will be playing with 28mm figures on 6' by 4' tables using a 15cm grid. Gridded battle mats will be provided (or you can buy and bring your own). If you don't have a suitable army I can write a list for you and loan you one on the day; I have quite a few! :-)  I can teach you the rules if you've not previously played.

If you would like to come along drop me a line and I'll forward to Steve Dover who very kindly is organising the event. There will be a nominal charge to cover costs. Due to the relatively small size of the venue we only have a very limited number of places, so I recommend an early application!
Posted by BigRedBat at 18:55 No comments:

I couldn't resist buying these superbly painted minis off of chum David Imrie; they turn out to be late c. 17th French and Huguenots in Williamite service. The flags are stunning, and I love the grey uniforms. Now this is a period until last week that I have never remotely considered gaming; I shall finish off the two (or three) units and see how I feel about getting enough more painted to play a game. I have been messing around with horse and musket rules, after all... 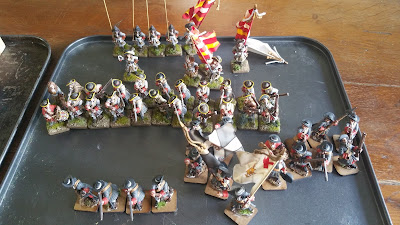 Below is the current state of my painting tray; Celts for Dug in the foreground, some lovely Middle Imperials, again from David Imrie in the centre and war elephants for a game at SELWG behind. Lots and lots to do and not a lot of time before SELWG! 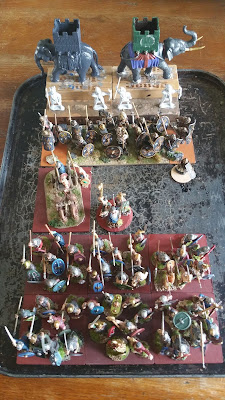 In other news... I've imported a load more of the excellent cloth battle mats from Deep-Cut studios in Lithuania, both gridded (10cm, 15cm and 20cm) and ungridded, including the new wasteland mat shown below. These are a great product; I'll be using them for most of my games. They can be found in the BigRedBatShop. 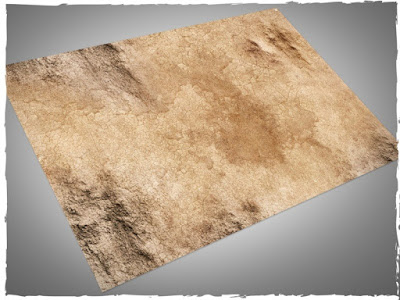 Posted by BigRedBat at 14:56 No comments: 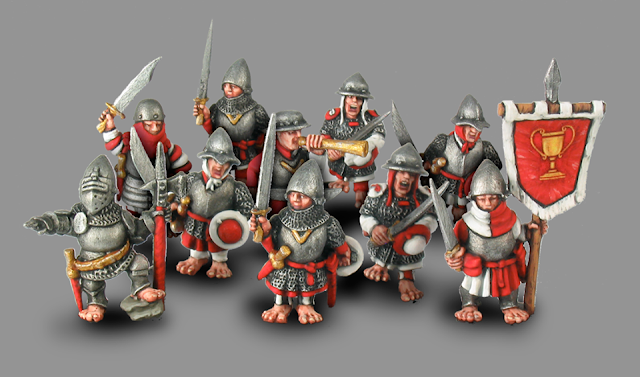 Glorantha aside, I've never been  much into fantasy gaming. However I just couldn't resist these stalwart (and as-yet-unreleased) halflings from Kawe at Westfalia Fantasy Battles- here painted by the very gifted Shaun Watson (Redzed). I love them from the top of their helmets to their hairy hobbit toes.  :-)
Posted by BigRedBat at 09:43 No comments:

Email ThisBlogThis!Share to TwitterShare to FacebookShare to Pinterest
Labels: Fantasy

Arthur and Magnus Maximus at Partizan

Very belatedly, here are shots of the recent game on which the Newark Irregular boys and myself collaborated. Most of the miniatures, terrain and buildings are from Steve Jones and James Morris superb collections as seen in the WAB "Age of Arthur" book, with Scrivs, Mog and myself topping them up. The photos are from various contributors including Darrell Hindley, John Thompson and Ian Notter. 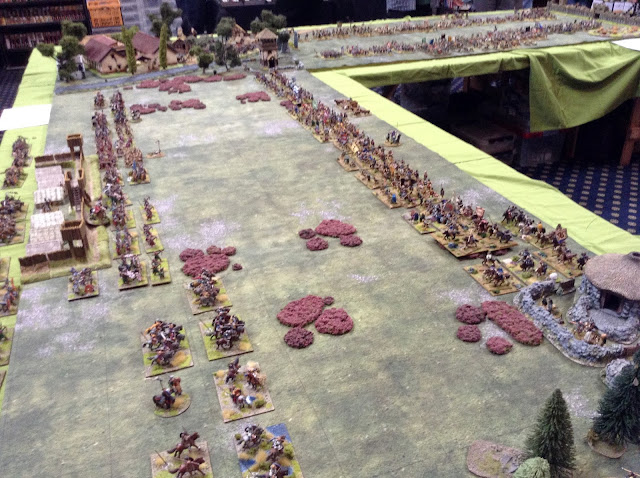 Above the whole table, which was L shaped and roughly 15' by 15'. In the foreground Magnus Maximus' Late Romans (left) fact a Pictish horde. 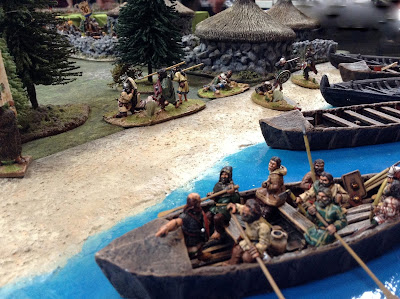 Above Pictish reinforcements coming ashore with their village in the background. Below a couple of shots of the Pictish warbands. 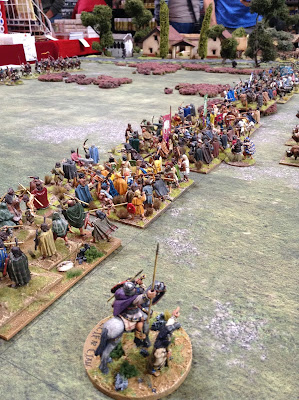 The printed gaming mats proved very popular- so popular that four of the five used in the game were "spoken for" by the close of play. I have started importing them from Deep-Cut Studio in Lithuania, and they can be found in the BigRedBatshop, I'll have some desert ones too, shortly.

Below, Picts peer nervously out from their villages. 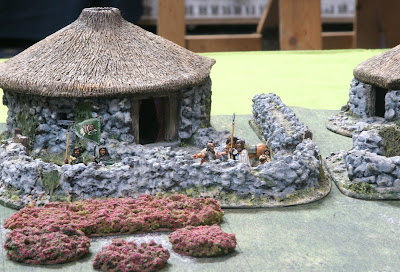 I made the heather- it is clump foliage glued to MDF with a dusting of pink flock. Cheap and effective and I'll make some more, also more gorse.

Romans drawn up in front of their camp. That's Magnus Maximus on the horse. Unfortunately I didn't get any photos of the Arthur vs the Saxons game, but here are some lovely shots of the village situated between the two games. 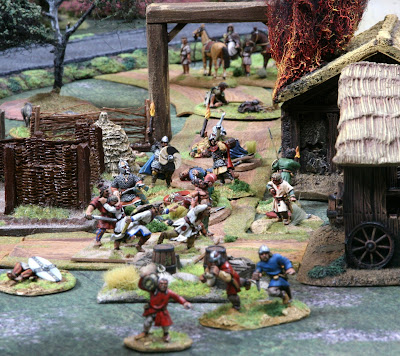 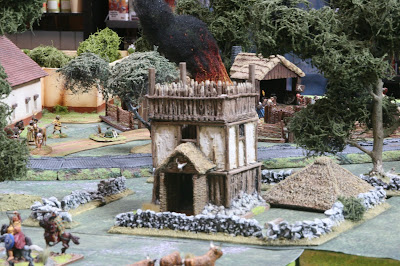 James' villa (below, one wing only) is stunning and packed with interior detail, too. 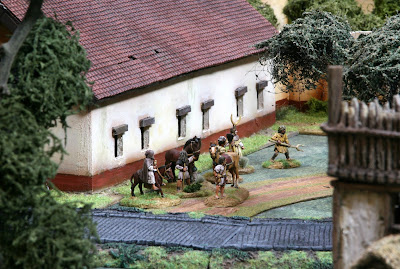 Below To the Strongest! action as evidenced by the presence of playing cards. The Roman unit with the blue shields and draco (bottom left) broke through the Pictish line. 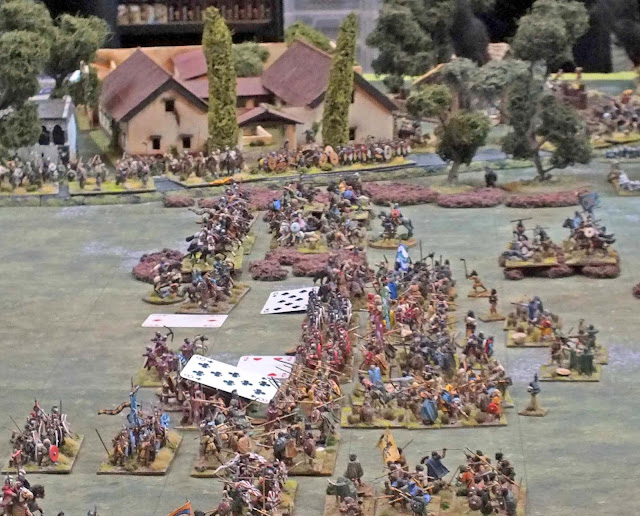 Finally here's another shot of the lovely stand that the Newark Irregulars very kindly gave me; they formed the garrison of the Romans camp. 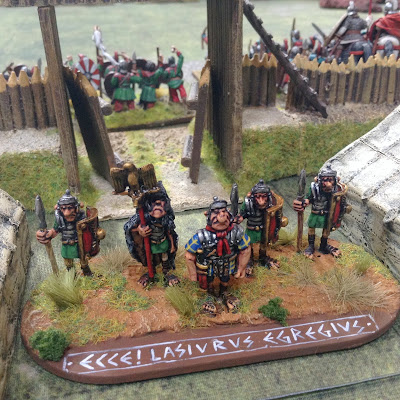 Many thanks again to the Newark Irregulars and to all my mates who helped on the day; it was a pleasure. Farewell to Kelham and onwards to the Newark Showground! Next year there should be space for a proper-sized table. ;-)
Posted by BigRedBat at 13:31 No comments:

These are my second and third units of Vandals, this time painted by Shaun Watson (Redzed). 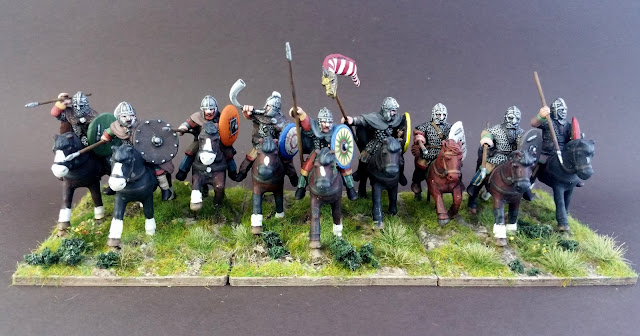 The first unit (above) are armoured "heavies" and the second unit (below) are unarmoured. The only change I made to Shaun's minis was to give a few the excellent Goth transfers from Little Big Men studios, many of which are based on the designs of Late Roman units. I've mounted them on deeper bases (67mm deep - five such units can fit in a 4L Really Useful Box).

Vandals are likely to have had short beards with many having long blonde hair. I really need to get going on some Vandal foot soon. I pe that these units will eventually fight the projected Aventine early Byzantines.

For my To the Strongest! rules I've created a pair of Vandal lists, because the proportion of cavalry seems to have increased steadily after they crossed the frozen Rhine in late 406 CE - by the time Belisarius whupped them in 533 CE they certainly had a very substantial cavalry contingent. I've just edited both lists and they can be downloaded for free from here.

This week I've been recovering from Partizan and sculpting tack and armour onto my Aepycamelus minis, of which more anon.

Lastly, my next gaming outing is at SELWG on Sunday 11th October, where I'll be running (as ever) a big game - Antiochus Soter's 278 BCE "Elephant Victory" over the Galatians. If anyone is coming to SELWG and would like to play (or better still help) please drop me a line as soon as possible!
Posted by BigRedBat at 13:09 No comments:

Email ThisBlogThis!Share to TwitterShare to FacebookShare to Pinterest
Labels: Vandals 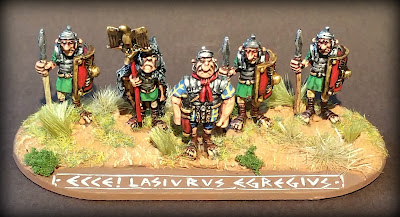 Behold the BigRedBat! This lovely stand of Asterix-style Romans was unexpectedly presented to me on Sunday by the Newark Irregulars, as a very generous counter-gift to a baboon I donated for their Keren game. For the curious, the BigRedBat tag is a reference to a model I made back in '02. The minis are lovely and will provide a garrison for my Roman camp in many games to come!


Luckily Tabletop Mog was present to record the very instant of presentation in his below action shot (from the left: the left half of Steve Jones, the eponymous Bat in tasteful shirt being presented with model, James Morris and Scrivs. 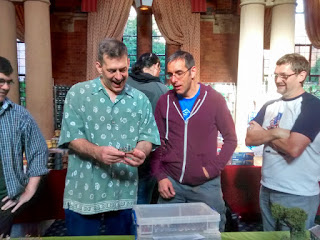 I've not had enough time since returning to get my pictures of our collective "Arthur and Maximus" game together. However Scrivsland has some great pictures of the game and the other excellent games at Partizan, and Wargames Illustrated took some beautiful photos too. Hopefully in  a few days I'll have time to do a post.

The last Kelham Partizan was a memorable event.  It was great to meet so many friends new and old including the Newark lads, Muswell mate Ian; TtS! stalwarts including John Thompson, Dave Lycett, Mark Emms and Simon Wilson; paint-gods David Imrie and Andres Amain, Jack Glanville, Darrell Hindley, Bunker Shaun, Meeples Nigel, Craig Daisho Cartmell, Daniel "Glutter" Mersey, Harry Sidebottom and Tom, WS&S Guy, WI Daniel and all the others (many apologies) who I've forgotten (I'm dreadful with memory, especially names and faces). Tricks and Laurence did their usual super organisational job. The next Partizan will be at Newark Showground on 22nd May 2016, one for the diary!
Posted by BigRedBat at 14:46 No comments:

These stunning Footsore Miniatures Goths were mostly painted by mate Saxon Dog and originally served in a small Arthurian army. I have exchanged the shields, retouched, rebased and painted a couple more to join them (sadly rather less well) and they have become the first unit of a new Vandal army, of which more anon. Below are a couple of close-ups of David's stunning painting; they are clickable. 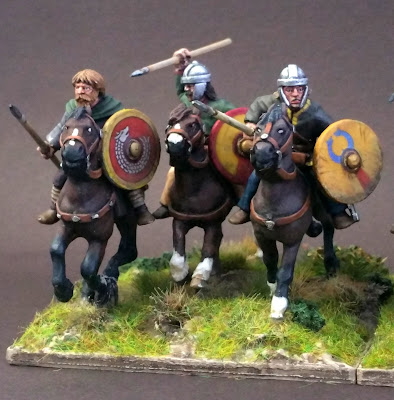 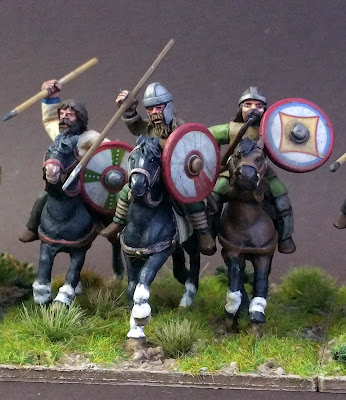 There will be a Vandal force in one of my games at the Wargames Holiday Centre in November.
Posted by BigRedBat at 17:55 4 comments: 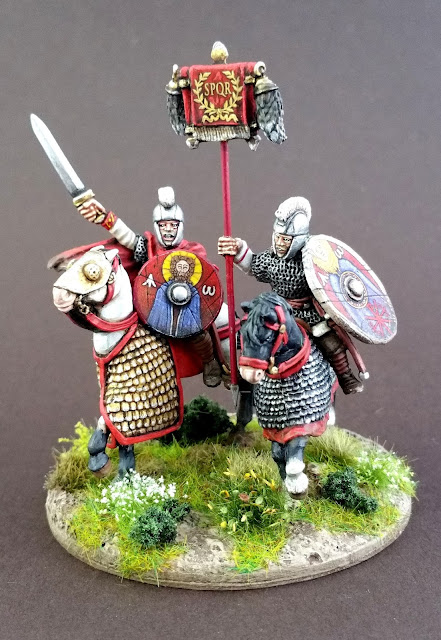 Two battles from either end of the Arthurian era!

Around twenty years ago, we started gaming the Age of Arthur armed with Bernard Cornwell books, Foundry and Gripping Beast miniatures and boundless enthusiasm for an unpopular period. Games at Partizan always fired our imaginations. Our table this Sunday 6th September will feature two battles, separated in time by perhaps 150 years, featuring models from the collections of Steve Jones, Martin Hogg, James Morris and myself. I will be running the games using my ‘To The Strongest!’ rules. If you'd like to play (and haven't mailed me already) please drop me an email at the address on the left. We will run each game twice, AM and PM, lasting around 90 minutes or so. No previous experience of To the Strongest! is required.

Magnus Maximus, a Spaniard, was the first of a line of soldier-emperors to build upon a British power base.  In 383, he took an army from Britain, crossed to Gaul, and defeated and killed the Emperor Gratian.  Prior to his usurpation of the imperial throne, it is believed that he mounted a campaign against the Picts to subdue the area north of the wall, and it is this we imagine in this first game.  The villa is perhaps geographically unlikely, but nothing says ‘Fall of the Empire’ quite like a crumbling Roman estate…

Arthur against the Saxons: The Battle at Fort Guinnion, c. 530 AD

"The eighth battle was in Guinnion Fort, and in it Arthur carried the image of the holy Mary on his shield, and the heathen were put to flight on that day, and there was great slaughter upon them’ – Nennius

This game is a more conjectural affair following a traditional (if unprovable) theme of Britons vs. Saxons!  The warlord Arthur is giving battle to the invading Saxons of Cerdic somewhere in lowland Britain, near the Fort of Guinnion (forts and rivers being the most likely locations for battles in this period).  The Britons are bold, chivalrous and Celtic, the Saxons numerous, ferocious and unwashed: who will win?

The beautiful command stand above was painted by David Imrie and is the new pride of my collection! David used him as King Arthur, but I will use him as Magnus Maximus, the late fourth century usurper to the Western Imperial throne, who led the armies of Britannia onto the continent in an attempt to take Rome. David individually highlighted each scale on the barding... bonkers. I've merely rebased Maximus onto a round command stand as he will be a detached general in my rules.
Posted by BigRedBat at 13:32 No comments: 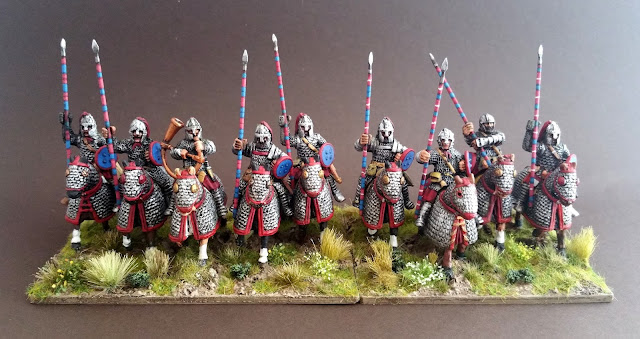 This is my sister unit to last week's clibanarii; these are the Equites Catafractarii Iuniores, a Vexillationes Comitatenses unit under the control of the Comes Britanniarum. Unusually, I painted most of these myself some years back; I have just "tarted them up" a bit including rebasing and giving them new bling-y lances. They can deploy in line or cuneus. 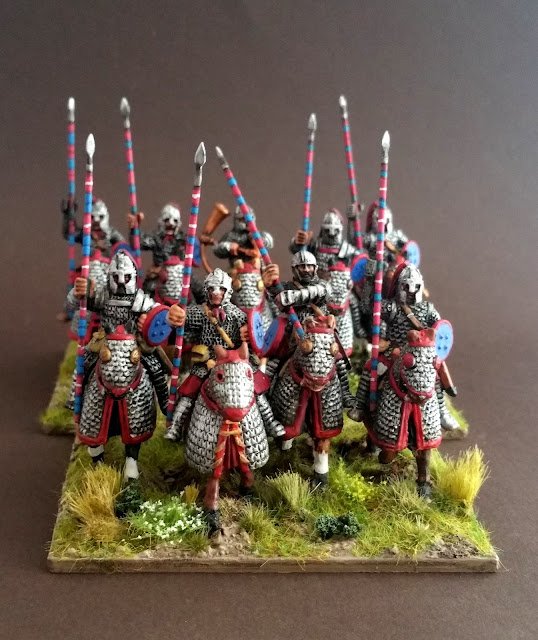