At the Society of Ancients Game Day, last year, one of the players was a chap name Dug.  Dug caught the C&C Ancients bug very badly, indeed, and barely a day has gone by without a few photos of one of his games thudding into my Inbox.
His latest game is the Epic Guagamela scenario. Apparently they managed to fight this huge battle three times in a single day!
Below are some photos; the closeups were taken by Mark, who also played at Zama.  Dug has an impressively large collection of minis... I also rather envy his large gaming shed.  You don't tend to get gaming rooms like that in London.  :-( 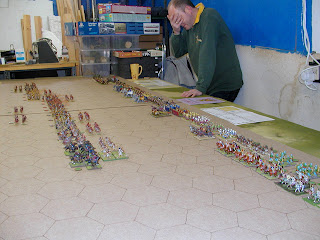 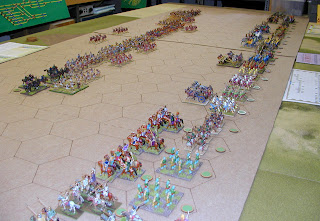 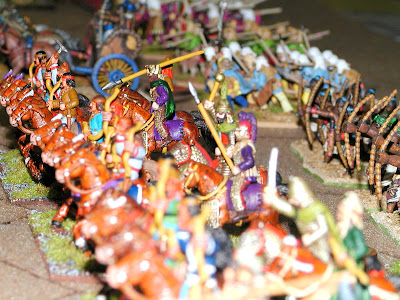 Above is a closeup of the Persian hordes.  The Macedonians do look somewhat outnumbered!

I shall post a few more photos as they come along...
Posted by BigRedBat at 20:32 7 comments:

My first Middle Imperial Roman unit (pictures clickable; worth it for the LBMS shields...).  I bought these painted on fleaBay, painted one more mini to match, replaced the shields and rebased.  Whoever originally painted them was very talented.  I aspire to a small army... some II Parthians, Lanciarii and a unit with the Dura Europos shield.
My impressions of the A&A miniatures are very favourable. I've ordered (and received) some more.  Minis that look somewhat dubious on their Website, are actually very nice in the hand...  Most or all of the Romans were sculpted by Aventine Adam, I believe.

Now I can't decide whether to paint another pretty unit of MIRs, or some French Napoleonic artillery, by way of a change.  Tough call...
Posted by BigRedBat at 20:11 12 comments:

Can a man have too many Romans? 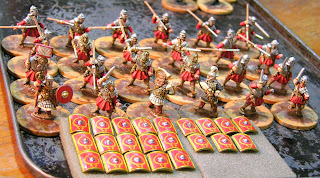 This is the first of a number of Middle Imperial Romans units that I intend to paint.  I bought 23 of these, nicely painted, on eBay, and painted one more to match.  I've taken them off their WAB bases , retouched and removed their shields (they had oval shields, which feels wrong with Segmentata).  I've given them Black Tree Scuta, becuase I feel the A&A are a little irregular in size.  I hope to start basing, tonight...
I will be doing a Late Roman army too, lots to do...
Posted by BigRedBat at 19:44 15 comments:

Welcome to everyone who has signed up as a follower, and a particular welcome to "The Man Cave", who is number 200!
I've run out of catapults for the moment, but include a picture here that I've shamlessly nicked from the net, of the ballista I'd like to build next.  Well, like this one, but a bit bigger. 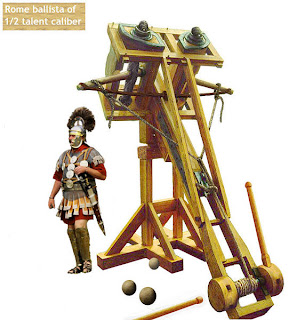 Here are the rump of my Roman artillery pieces; 4 large scorpions (all pictures are clickable).

The first 2 are my favourites, 20mm scale Zvezda plastics with BTD and Foundry crew. 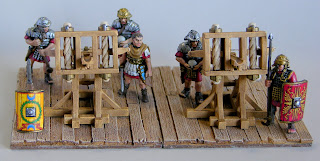 The bases are coffee stirrers of varied thicknesses, stuck onto thin metal plates, scribed with lines, painted and magnabased.  My concept with the planking is that I can use them in towers, or in siege fortifications.  The yellow shield is the design I've picked for my second legion. 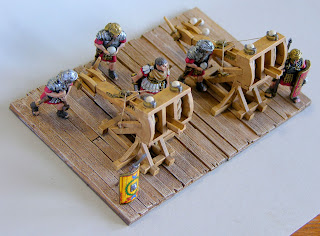 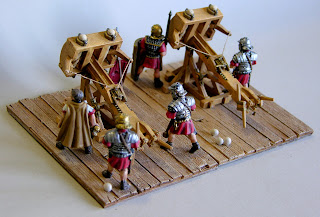 The second pair (below) are from Black Tree Design; rather simpler, but serviceable. 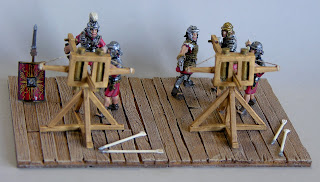 I like their loaders with the long bolts (below). 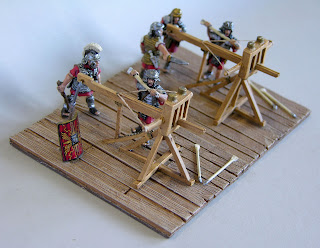 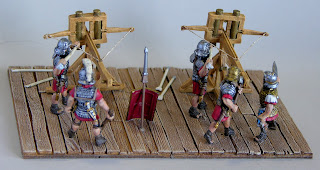 I have got quite a lot more Ballistae of various sizes (mostly smaller), but I want to press on with my legion command figures, and paint a few Napoleonics.
Posted by BigRedBat at 14:44 14 comments:

I've finally completed my pair of onagers,  the heavy siege artillery for my Early Imperial Roman Army; although they currently lack opponents with a city wall!  However should the Parthian enemy* ever trouble the Eastern Frontier, they will come in very useful.
The models are Black Tree Designs, and the crewmen a mix of Black Tree and my beloved Foundry Salehs.  The first shots below are of the the catapult for my XIIIIth Gemina Martia Victix Legion, and the later shots are of the catapult for my projected second EIR legion.  All pics are clickable. 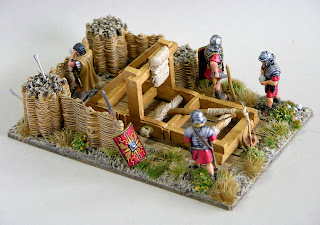 The onagers are protected against counter-battery fire, by anachronistic gabions (resin, from eBay). 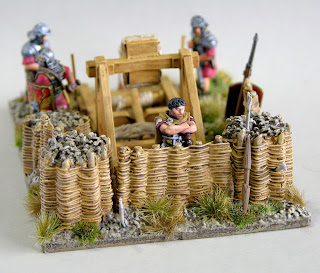 Above, a tribune grimly surveys the lack of damage to the enemy's walls. 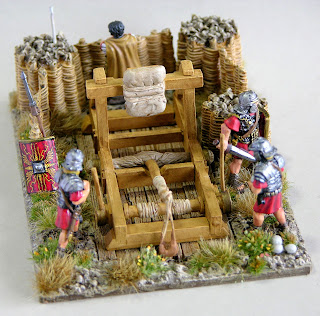 I added greenstuff and wire slings to the BTD weapons, and made some shot, too. 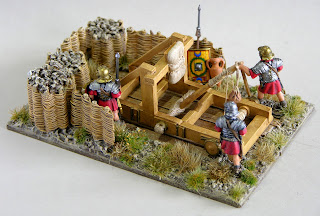 I'm very taken with LBMS's yellow shield design, which is just as well, as I'll eventually need to fit 240 more! 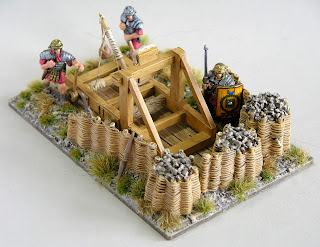 And finally the second onager, from the front.

I've almost finished the rest of the artillery crew; should be able to post them next weekend.  Then I'll get onto the senior officers for the legion.

*I do aspire to a Parthian army, and have started to buy some minis...
Posted by BigRedBat at 17:42 17 comments:

"Whilst the Balance of his Mind was Disturbed"

Early this week I was scoffing painkillers like smarties, whilst browsing eBay, and I did something I would never normally consider; hit a "buy it now" for an army in a new period.

I now own 5 battalions of Victrix Napoleonic French Line and 3 regiments of Hussars.  The minis I bought are quickly painted, using army painter I'd judge, but not badly executed and good value for money.  With a little TLC they will look fine (nothing like as good as RTB's or Saxon Dog's, though!).  Mon ami Greg is also pursuing a similar project, nice painting there, too.  These are the first modern plastics I've owned; disconcertingly light.  But nice.
My plan is to round this force out with some artillery and a regiment of heavy cavalry, and use it with Command and Colors Napoleonics.  My intention is that this will only ever be a side project to my ancients...
Posted by BigRedBat at 09:27 13 comments: 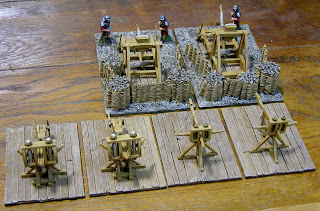 Just in case you thought I'd emigrated, I've finished the various warmachines and their bases , but not the crew and accessories which need around another week...
In other news; some very pretty miniatures just arrived from Aventine, mostly intended to join my Romans.  And I did something madly impulsive on eBay this week, that I will probably be regretting in a day or so... Simon goes plastic!
Posted by BigRedBat at 19:49 8 comments: