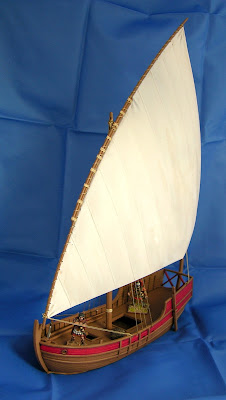 I've more or less completed the first of 2 "Roman" ships for my Autumn display game (Thapsus).  This is the smaller of the two vessels, and is intended to be a small trade ship of the kind that might be found around the fringes of the Mediterranean sea, that might be pressed into use for transporting troops.
This is lightly converted from the 1/100 Zvezda "Nina" kit. Luckily, the Romans had lateen sails, so I was able to use the very nice one provided with the kit.  I cut away some renaissance features, and added steering oars.  I've given her some basic rigging, sufficient to pass muster on a  wargaes model, I hope. 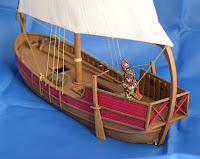 I don't have a crew yet, so a couple of figures Andres painted for me are standing in, to give an idea about size. This pic shows the railings and stern-post I made for the stern, and the steering oars. I will later add a bow-wave and a wake. 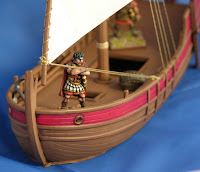 Next time I will go with a lighter coloured wood for my vessel, but all-in all I'm cautiously pleased with my first venture into things naval, and Roman...

I'm now looking for a suitable name for her; probably should be female, and likely of mythological origin; any contributions gratefully accepted!
Posted by BigRedBat at 14:30 15 comments:

I've been busy working on another project, but last night managed to get the smaller trade ship base-coated. I will highlight and stain in due course.... it is at least looking somewhat Roman. 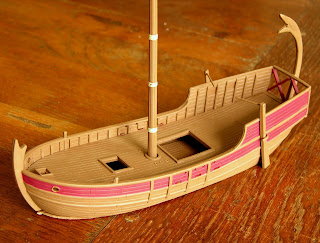 I was surprised how quickly one can paint a ship, compared to figures.  It looks like the ship will take less time to paint than its half dozen crew!

Note to self: hull was sprayed using Army Painter Leather Brown, and highlighted with a 50/50 mix of Vallejo flat earth and tan earth.
Posted by BigRedBat at 11:20 9 comments:

I recently wrote my ancient 1999 Galaxy off in a minor accident, and have been vehicle-less for a month.  This was becoming a looming problem, what with Partizan and Colours beckoning. 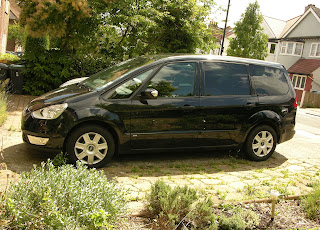 Here's my new battle taxi- literally a taxi- until last month it was roaring around London as a minicab. I knew I had to had it when the chap showed me how all the rear seats fold into the floor, creating a very large "hold".  I reckon I could get all my terrain boards and all my 28mm minis and terrain in there....
Posted by BigRedBat at 14:13 7 comments:

Last night I laid the keel (metaphorically speaking, at it is a waterline model), of a larger vessel that will hopefully become a Roman merchantman.  The original "Nina" is on the deck for size comparison purposes.  The new kit is 42cm long, and will be rather longer once I've finished with it!

The new model will be based on the Zvezda St Thomas, a 1/72 medieval English warship kit.  I will use the hull and mast, as per the kit, discard the lovely castellated turrets, and add a bowsprit, cabin and a deck at the stern.

This latest is a serious undertaking, and may not be ready in time for Partizan, but should be at Colours, hopefully alongside Legatus' Leviathan.  I may need to add more sea boards...  ;-)
Posted by BigRedBat at 11:13 9 comments: 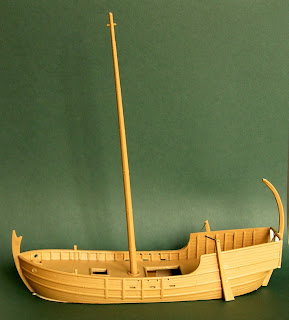 A brief update; I've added steering oars and the mast.   Could still do with some details, perhaps an awning over the stern.

Next I need to think about painting her, I'd ideally like to find a wood-coloured spray primer, to save time.
Posted by BigRedBat at 09:36 10 comments:

Last night I water-lined the Nina model and began to tinker with it, to give it an appearance closer to that of a small Roman trade ship. 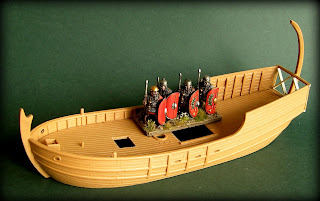 So far, this has involved removing the rudder and replacing part of the stern, and adding a curving stern post.  I increased the size of the hold-openings as the kit is 1/100 scale and my minis, 1/48. 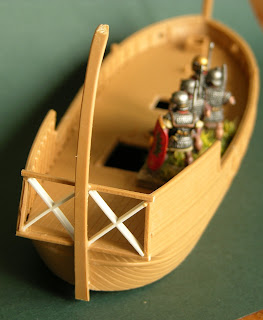 Later I'll add masts, steering oars, an awning and deck clutter which will help it to feel more in-scale.

Curiously, I have seen illustrations of Roman ships that aren't a million miles off this.  I think it'll pass... might even be OK for the Rhine.  Which gives me another idea for what I could use this for...
Posted by BigRedBat at 13:53 14 comments:

Last night, inspired by the sweltering heat in these parts, we played a Western Desert game with my venerable army of microtanks, and my adapted Memoir '44 rules. 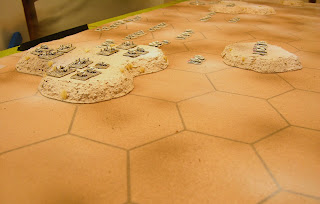 Above the British "defenders" dig in on what passes for terrain.  Below, the German anti-tank screen moves forward. 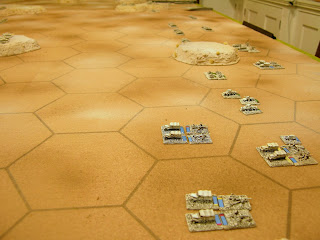 The British so-called "defenders" attacked from the outset, and eventually left much of the Afrika Corps burning in the desert!  This was down to a combination of superb cards and inspired play; one air attack, alone, took out most of an artillery regiment and also a battery of 88's.

In place of Heineken, we drank a chilled Italian wine.
Posted by BigRedBat at 16:19 9 comments:

This arrived in the post today...  I'm not really a kit builder, nor much interested in the renaissance, and am strictly 28mm.  But I do have a cunning plan.  :-) 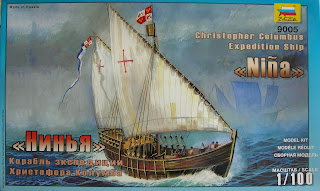 A third legion for Caesar...

Here are the first 6 cohorts of my latest, third, Caesarian legion.  All photos are clickable...

Around a third were painted by Nick Speller, a third by myself and the remaining third are eBay repaints.  It doesn't show in the photos, but the shields, tunics and plumes are in a variety of different shades of red. 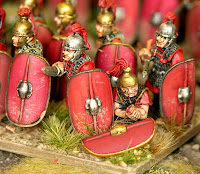 The miniatures are mostly Foundry and Companion, a mix of armoured and unarmoured, but I've also included a few Warlord Games casualty figures (on recommendation from Andres), which blend in very well.  May need some more Warlords...  I think the legate may be a Classical miniature, which were (for about 24 hours) available via Aventine.

I've gone for a slightly different approach on basing.  All the legionaries are in 8's on 60 x 50 bases, to save time deploying and moving them.  The deeper bases also help to protect the relatively fragile spears.

If you want to see them in action, they will be in action at Partizan, Colours and SELWG...
Posted by BigRedBat at 14:22 19 comments: 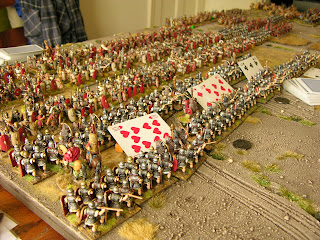 With help from friends I'm play-testing a "lite" version of my "To the Strongest!" rules, with this version driven by cards rather than dice.  They rattle along very nicely.... at 5- 10 minutes a turn.
Posted by BigRedBat at 09:21 12 comments:

...not enough blogging.  Unfortunately, there are times one just has to get the bit between one's teeth and plough on to complete a project; this is one of those times! 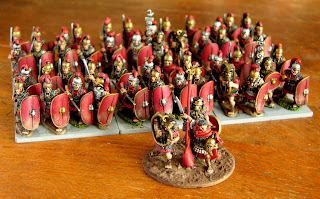 These are the remainder of the painted Caesarians I had, plus two dozen I painted myself.  Together with the ones I completed earlier, they give me six cohorts and command; the core of a third legion.  Later, I'll add another four.

Tonight we'll be trying the "lite" version of my rules in a Roman on Roman bash, based on the Thapsus battle that I'll be taking around the shows in the autumn.
Posted by BigRedBat at 09:43 9 comments: 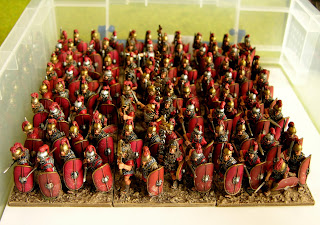 4 cohorts down, bar flocking.  So now, unfortunately, I have to start the next lot (below).  :-(  I don't mind painting the legionaries, but the signifers and cornicens are a pain. 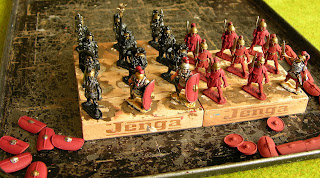