Tonight, a nearly full muster of the Muswell Militia, refought the second day of Asculum 279BC, using the C&C Ancients rules and Ian's (Donnington Roman and Xyston Macedonian) 15mm figures.

Below is the deployment. The Romans on the left were led by Ian and George, and the Italian Greeks and Macedonians by myself as Phyrrhus, with Chris and Dr Simon on the wings. 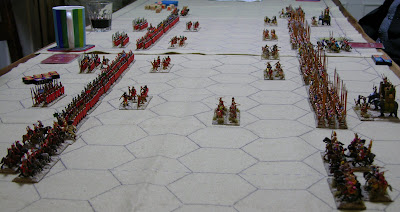 We Macedonians launched two stonking attacks, which should have worked.... honestly. Our first was a rush forwards by the pike phalanx in the left centre, which recoiled under a hail of pila, after failing to make any impact on the Roman line (presumably the Tarentines had failed to take to the pike). The second was a "mounted charge" on both wings with elephants and cavalry (below), which were both smashed by lucky counter attacks by the Roman cavalry. 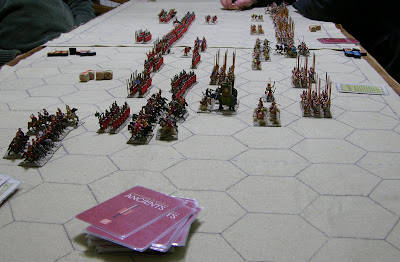 The final shot, below, shows the situation late in the game. The Romans remorselessly ground us down to a 12:10 "Phyrric defeat".

A simple but thoroughly enjoyable game; I hope we'll play it again, sometime.
Posted by BigRedBat at 23:25 1 comment:

Email ThisBlogThis!Share to TwitterShare to FacebookShare to Pinterest
Labels: After Action Reports

This is my 17th Caesarian Cohort. I bought 20 of the figures on Ebay from "Pool of Paint" who also kindly supplied the transfers I needed to finish the unit, and painted 7 more myself, to match. I'm really pleased with the overall effect; these are my first Caesarians to have shield transfers.

Because they have unfeasibly expensive imported blue paint on their shields, I shall consider them to be one of the Praetorian Cohorts that served in the Civil War that occured after the death of Caesar.
Posted by BigRedBat at 16:54 5 comments:

The eagle-eyed amongst you may notice that in a week's painting, I have managed to half paint a mere 7 miniatures (the ones at the front). I suppose I did also manage to do base the trees below, but it doesn't seem like a lot of progress. :-(

26 palm trees, courtesy of ebay. These are nifty products that cost £1.20 each including postage, but need basing. They stand up to 20cm high. I like the trunks and the fact they are fairly rugged; I need to buy some silfror tufts for the bases. 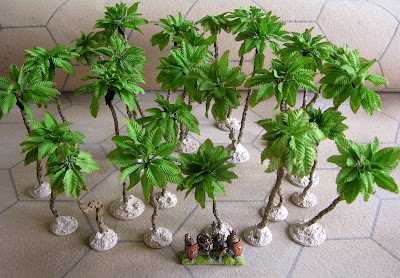 It has occurred to me that I now have a more than adequate selection of desert terrain, and no desert themed armies. I have started to think of ways around this...
Posted by BigRedBat at 16:39 4 comments:

I'm progressing all-too-slowly with the blue-shielded cohort- it now includes 19 of the 20 minis I bought on eBay, and 5 more I have just painted to match. It'll have an aquila command stand by the time I finish. For all their dubious authenticity, the blue shields do look nice...

The veterans cohort lurks half-painted to the rear, awaiting their command minis, which I hope to start painting tomorrow.
Posted by BigRedBat at 15:01 4 comments:

I'm in essay writing hell at the moment, and hardly getting anything painted; consequently my painting tray is backing up with painted, primed and part-based figures. Click for a closeup...

At the front is a unit of 20 nicely painted Caesarians that I bought on eBay, and want to retouch and expand to a 24 plus a seperate legion command stand. The LBMS shields look great... behind them lurk a unit of 24 Black Tree legionaries (half the figures are painted) that are going to represent time-expired veterans, recalled to the colours. They are going to be my personal tribute to the 2000th anniversary of Teutoburgerwald. Altogether, around 5 weeks of painting, I reckon, even if I wasn't busy!

Here's a pic of Greg Privat's splendid Innsmouth participation game from Salute. Eldest son and his mate are helping run it. 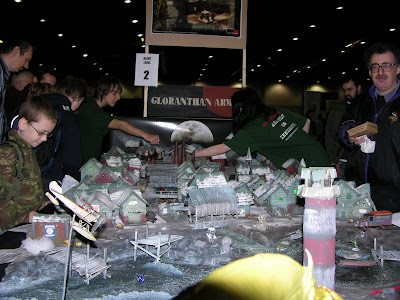