Stow-on-the-Wold is a modest scenario depicting the last major battle of the First English Civil War, which occurred when the last Royalist field army, led by the valiant Jacob, Lord Astley, was brought to ground by a superior Parliamentarian force. It is a modest-sized battle with only 21 units. It will suit two to four players, or solo play.

The eight-page scenario PDF includes a brief account of the campaign and the battle, reconstructed orders of battle for both sides, and a deployment diagram. It can be viewed on a tablet, or printed out and bound.

Also included are the For King and Parliament Battle of Stow-on-the-Wold unit cards, designed by Ian Notter. There are cards for the general officers, some of the colonels, and all the units that we have been able to identify as being present at the battle, or surmise were there. These can be printed out on card, and used, in conjunction with the scenario and rules, to re-fight the battle.

The scenario and unit cards can be purchased here.

If you are planning to re-fight the battle using For King and Parliament, you might also want to buy a 3' x 4' 10cm cross-grid plains mat.

Finally, the For King and Parliament ECW rules can be purchased here.
Posted by BigRedBat at 19:37 No comments:

Send us some more! 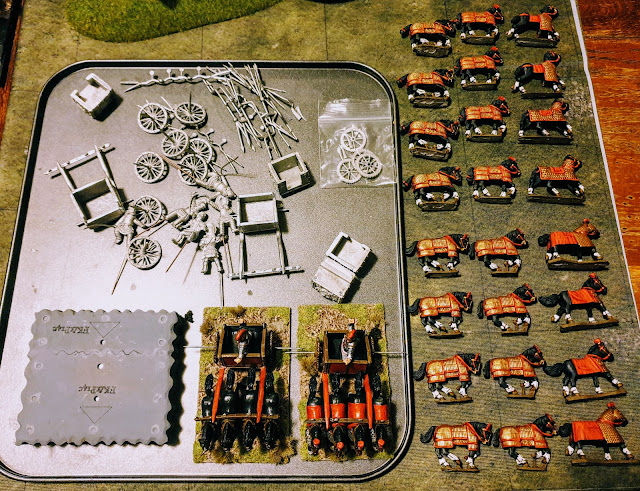 Here's another part of the Salute project. I have owned two old Vendel scythed chariots for some years but recently decided that I need a few more, and so here's a picture of the BigRedBat coach works. I have assembled cabs for two more Vendels and four newer Polemarchs (super models, festooned with blades!). Shaun McTague has painted all the horses for me, I just need to do a little snagging and assembly, and he can then paint the cabs for me, too. I've also prepared some Batbases with magnets and top-notch chamfering.

The title of this post comes from an incident at the second battle of Chaeronea in 86 BC, when the Romans"after repulsing (the chariots), clapped their hands and laughed and called for more, as they are wont to do at the races in the circus" (Plutarch, Sulla, XVIII.2-3).
Posted by BigRedBat at 20:25 5 comments: 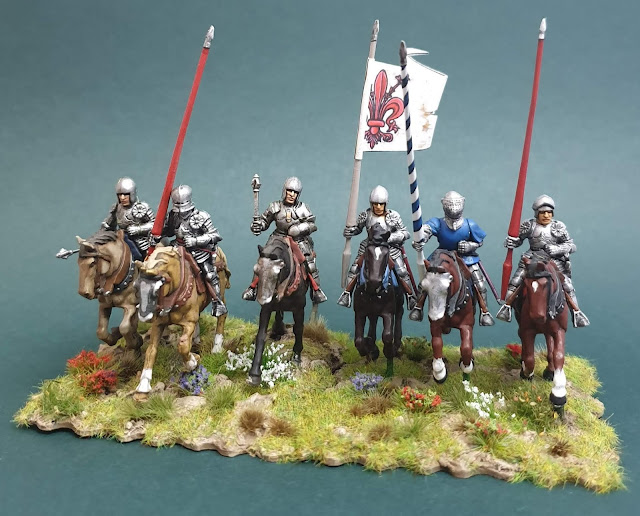 As well as the new guns, I've also been putting some more knights together for the Italian Wars. Above are some Florentines; I put them on unarmoured horses, like to ones depicted in the "Rout of San Romano". The excellent Florentine flag is one of Pete's flags, from eBay.

Below are more plastic Perry knights, this time in charging poses. Most of these were painted by chum Lionel in France, who paints a mean barber's shop lance. :-) 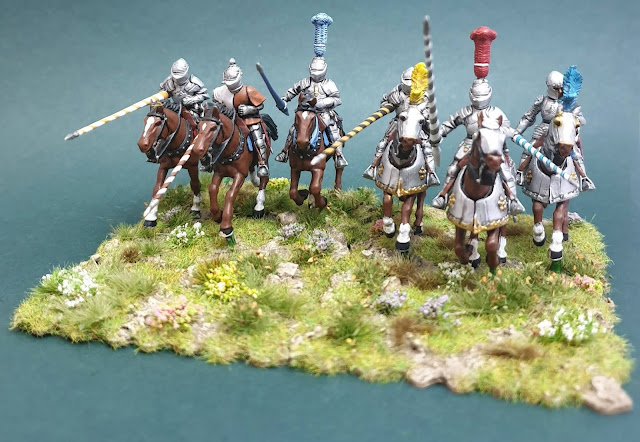 The extra knights give me more options for fielding either more units for the 15cm grid, or larger units for the 20cm To the Strongest! grid. I'm also currently putting a second Renaissance army together for eventual play-testing purposes.
Posted by BigRedBat at 10:27 13 comments: 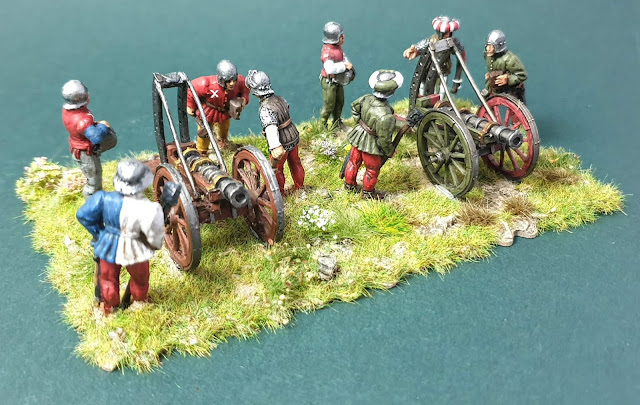 Here are my first medieval artillery pieces, two Perry breech-loading field pieces. The one on the left is in Burgundian livery, and on the right in Italian style. I bought these minis part-painted, finished them off and based.

I have been plugging away at the TtS! Renaissance draft, again, recently. Guns become quite useful in the Renaissance where there can be some very promising targets! :-) I plan to build a fair old artillery park, including bombards, organ guns and some big French field guns.
Posted by BigRedBat at 10:13 8 comments: