Hi all, I'm still playing catch up after Partizan but here are a couple of photos of the game, taken by chum Ian Notter. 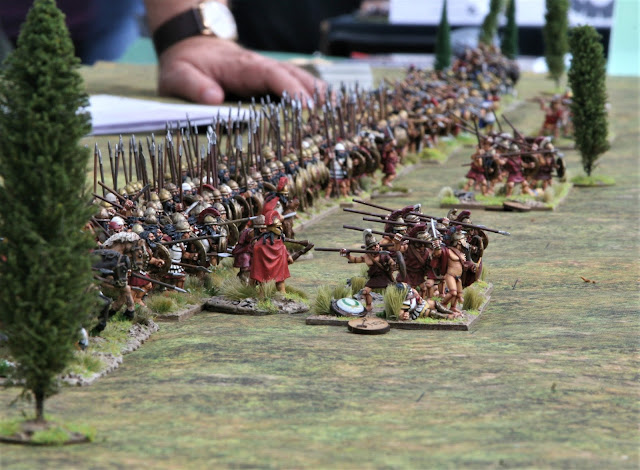 Above is the Spartan deployment- that's Cleombrotos I at the start of the battle.

Below is the Theban extra-deep phalanx. The speed of the Theban advance in the first game was astonishing (hilariously the new pack of cards they were using for activations wasn't completely shuffled and they played the 6, 7 and the 8 of Hearts in a row, advancing straight into melee and clobbering the Spartans). 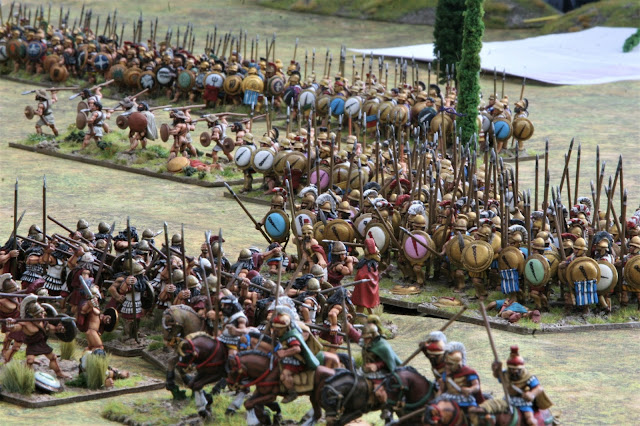 In both games Epaminondas' phalanx got off to a cracking start, but narrowly failed to break the opposing Spartans and was pushed back, disordered. In the second game it was routed. Despite this, both games eventually ended in extremely narrow Theban victories due to their superior cavalry (and in particular a large unit of very scruffy raw light cavalry) getting behind the Spartans and causing mayhem. Next week, when I have the time, I'll post the scenario in the BigRedBatShop for downloading; it's a cracker!

A huge thank you to Ian, Andrew Brentnall, Simon Williams, Phil Hamer and all those who helped, played or dropped by for a chat! It was a very enjoyable day at a terrific show. We were surrounded by lovely games with astonishing modelling- but I don't think any games were played by more people or with more good-natured enthusiasm than was ours.
Posted by BigRedBat at 16:12 No comments: 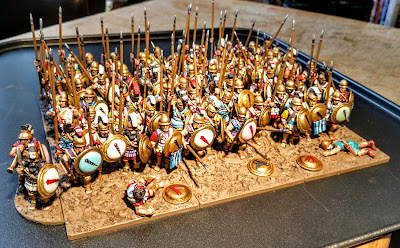 The bases are only part painted and also need to be flocked, but should be finished today/tomorrow in time for the show on Sunday. I'm very much looking forward to Partizan, especially as I want to see the stunning Crecy game that David Imrie and Simon Chick have been working on. 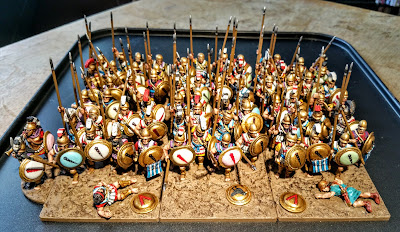 In other news, for "To the Strongest!" fans... I've just released a revised version of Even Stronger- this free supplement  includes additional rules that can be used with the To the Strongest! rules. This latest version includes changes to combined light troops, who may now charge formed troops regardless of how they are armed. I have re-written the light lance rule. There are extra sections on ammunition (including a very important change regarding lances and shock and lance chits) and extra weapons. Supported cavalry have become deep units. Artillery have had a boost with a new type – Artillery (field gun), and these and bombards are now very effective against dense targets.

The free supplement can be downloaded from:- 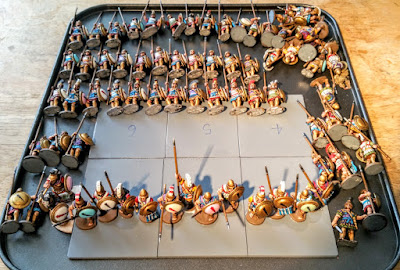 A quick WIP shot of the forming phalanx; all minis finished and varnished. Ranking up is always a challenge with animated minis like the ones I'm using here.

Happily I am currently ahead of target for Partizan! :-)
Posted by BigRedBat at 15:18 No comments:

Email ThisBlogThis!Share to TwitterShare to FacebookShare to Pinterest
Labels: Thebans 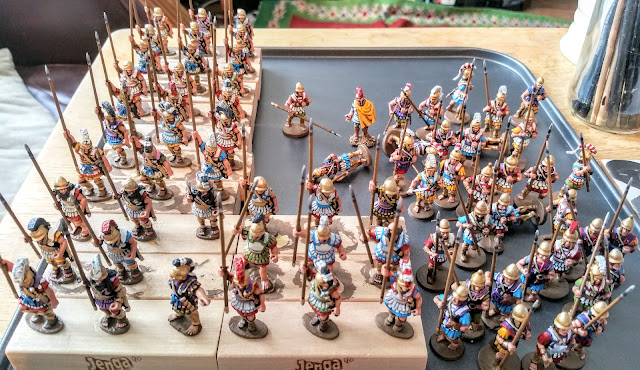 A hastily snatched shot of Thebans forming up for Sunday-week's mega phalanx. Here are the 70-odd hoplites (Lucid Eye, Foundry and Victrix) that will constitute the 6-deep formation. They are all in active poses - I want the finished unit to have a send of mass and momentum. The minis were all painted by Shaun McTague but I'm in the process of adding some detailing, ink and varnish. I'm getting back on schedule by dint of some rare, daytime painting.
Posted by BigRedBat at 13:40 No comments:

Email ThisBlogThis!Share to TwitterShare to FacebookShare to Pinterest
Labels: Hoplites

Thebans at the charge 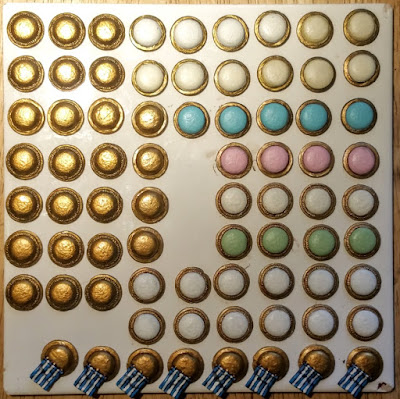 I have around 10 painting sessions before Partizan and have been racing to finish what I'm calling the Theban mega-phalanx for Leuctra- it'll be touch and go. Here are the shields- painted, varnished and awaiting their clubs of Heracles. The figures (not shown) are mostly-painted by chum Shaun McTague but need finishing, basing etc, there will be 72 of the blighters plus Epaminondas.

The Leuctra "To the Strongest!" game at Partizan will take six players and I'll run it twice. It will be short and bloody. I'm taking bookings....
Posted by BigRedBat at 15:46 No comments:

Email ThisBlogThis!Share to TwitterShare to FacebookShare to Pinterest
Labels: Thebans

Chum Welsh Raglan is trying to persuade Total Battle Miniatures to replicate this range of 10mm buildings in the larger 28mm scale. The lovely buildings are cast in light weight resin. They would be very useful to us 28mm gamers; I'm thinking Hatra, Palmyra and the Crusades, for starters. To help persuade TBM to manufacture them, please post an expression of interest on Raglan's blog (or here if you prefer); just say something like "I'd buy some!"  And let your friends, know, too!

The full range of buildings are illustrated on Raglan's excellent blog at: -