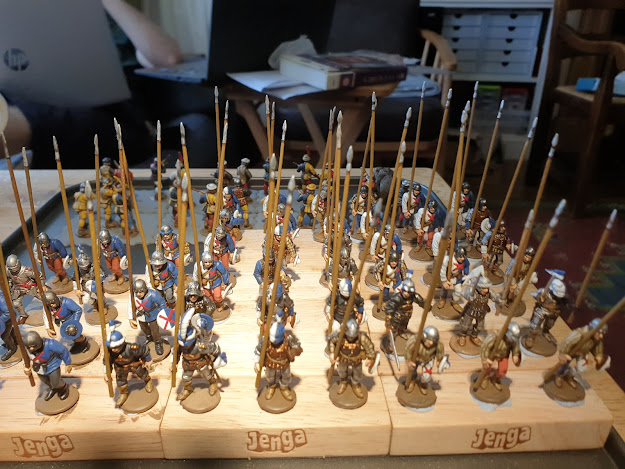 A quickly-snatched picture of some Burgundians that I’m working on- mostly painted by Shaun McTague, with some by Lionel Bechara and a couple painted by me. I’m adding facial details, highlights and shading.
This block will be 48 strong and will provide opposition for my Swiss (who are presently awaiting reinforcements). Later, I quite fancy adding some Low Country contingents, which often served in some Burgundian armies in the livery of their own cities, perhaps under guild banners, and which would help me to field Maximilian’s Hapsburg Burgundians.
Posted by BigRedBat at 15:14 8 comments: 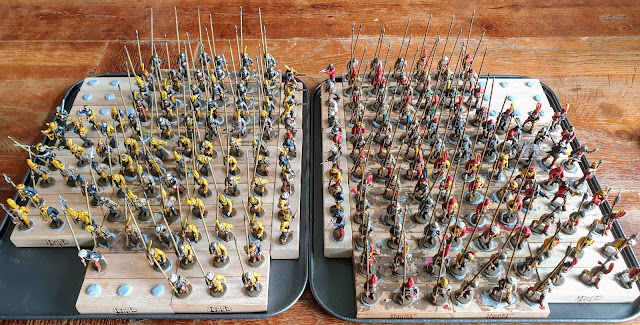 I've finished up most of the remaining minis for the first two Swiss keils- adding a highlight and matt ink wash over Shaun's painting. I now just need the final 2 dozen pikes, the flags and some new bases that I've had designed for the project. In the meanwhile, I will base the 18 skirmishing arquebusiers and a command stand, which will help clear some space for the expected reinforcements, and I'll prep some more minis for the remaining 2 (or 3?) keils.
Posted by BigRedBat at 13:18 6 comments:

Here are my first two Swiss pike keils, forming up. All the minis are Perrys, painted by Shaun McTague, and highlighted and inked by me. They are mounted in threes on temporary painting blocks (magnetised Jenga blocks). 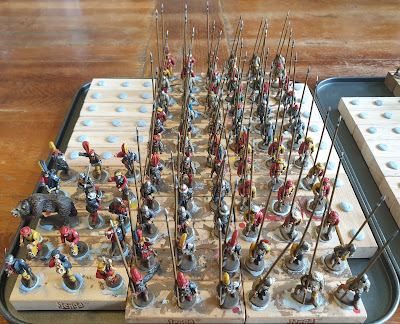 Here's the Berne phalanx, and mascot. The spare painting blocks are for the balance of the minis- Shaun has painted most of these and I'm filling in the gaps at the rate of 15 minis per day. 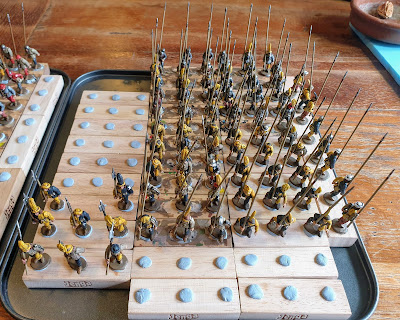 I plan to have 4 keils of pike (possibly 5). When completed, each keil will have 96 minis- mostly pike with a few halberdiers and command minis.  Several will also have an attached unit of skirmishing arquebusiers, and there will be a handful of light cavalry.   I'll also have the option of fielding a keil of pure halberdiers, for the early period, and I will be able to swap out some of the central pike, for halberdiers, in the transitional period. I'll describe the basing system in a later post. 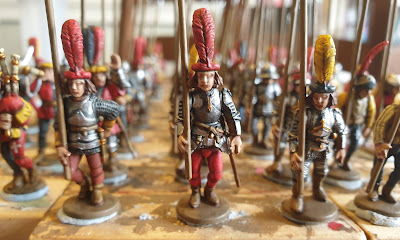 Here's a close-up- I'm using the metal Perry Swiss heads on plastic bodies, with some metals mixed in, and some conversions. The chap in the middle, Lofty, is a cut'n'shut (WotR torso, Swiss legs) who came out on the tall side. Shaun, who painted him, calls him "the man with the two bums". :)

It's a big project- 500++ minis- but with Shaun doing the heavy lifting, it's going rather swiftly. I'd like to think I'll have the first two keils based in around a month's time.
PS If you fancy a Swiss army of your own, have a look at the Swiss army list for TtS!, and also the special rule for "field squares."
Posted by BigRedBat at 14:29 9 comments: 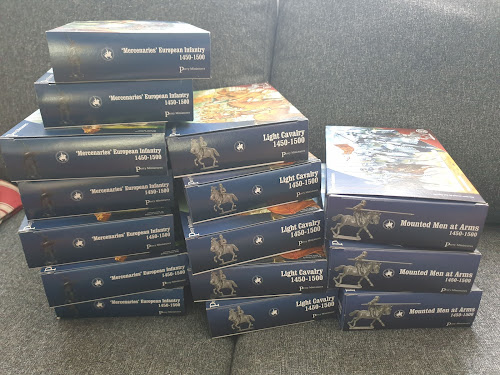 This week I received some much-needed reinforcements from the Perrys. I must have already gone through at least 20 boxes of their Wars of the Roses plastics, and here are almost as many, again. They got the order out really quickly; kudos to them, great customer service. I also bought some metals, not shown. 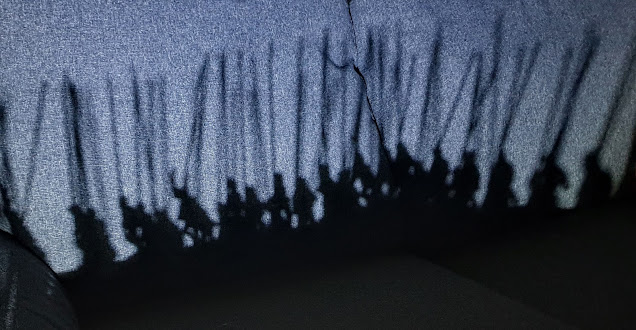 On Wednesday we had a power cut, and I took this atmospheric shadow photo of my current painting project, by torchlight, silhouetted against a sofa in the background. It looks very much like a grainy 1930's movie. I'll take a proper pic of the minis, next week. 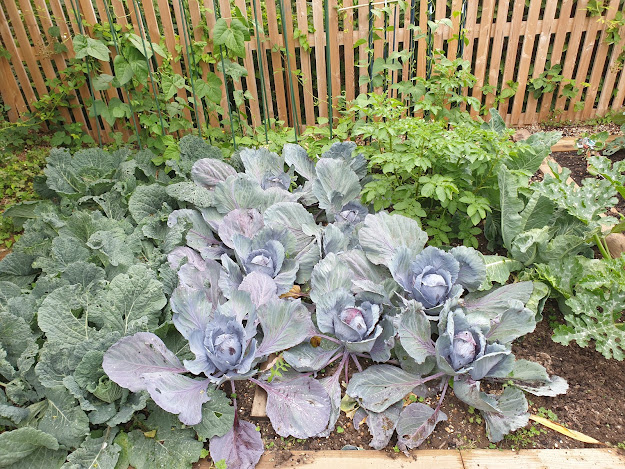 The weather round here has alternatively been rainy and sunny, and consequently the plants are doing really, really well. Above, red cabbages forming nice heads; below, the potato (5' high) and spinach bed. This gardening lark is very rewarding; who knew? 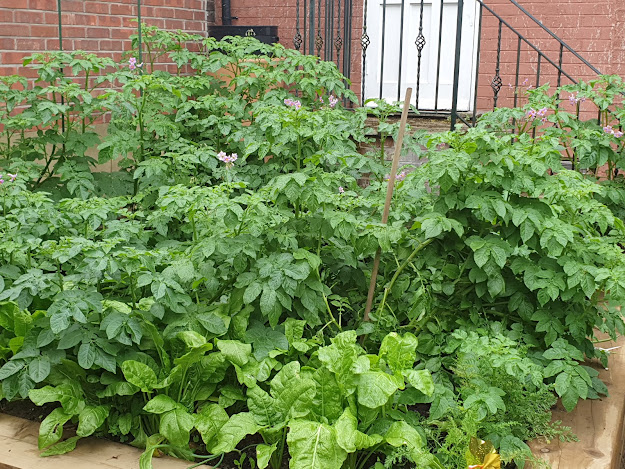 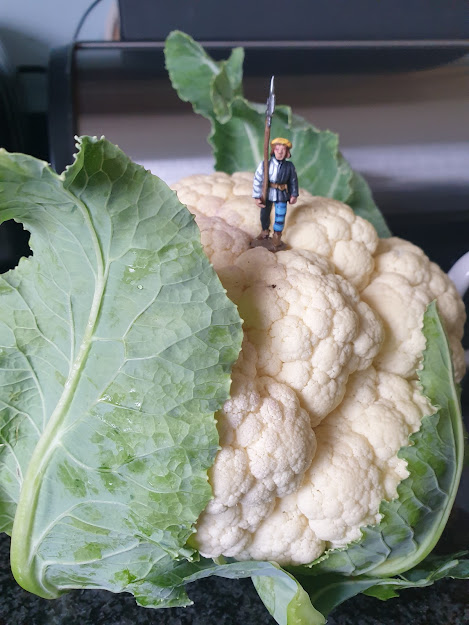 This is our first cauliflower- with Perry mini for scale purposes! Consumed, yesterday night, in a cauliflower cheese (the cauli, that it, not the Perry). 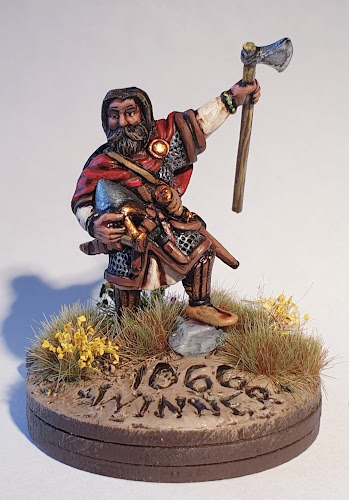 Finally, here's a  better shot of the winner's trophy from the recent online tournament- now flocked and in the post to Andy Lyons. It's on a Warbases counter, so super as a victory medal counter.
Posted by BigRedBat at 09:59 11 comments: